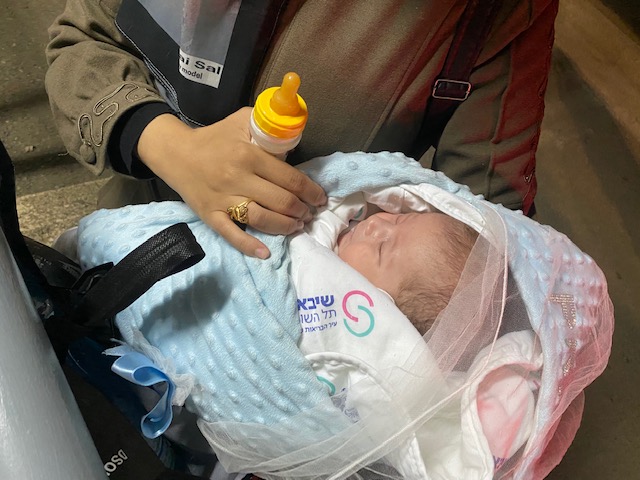 After vomiting frequently over the past few days, Ayub stayed at Sheba Medical Center for two days. The doctors were watching him there to rule out a major illness. Then they changed his food and indeed they were able to bring an improvement. 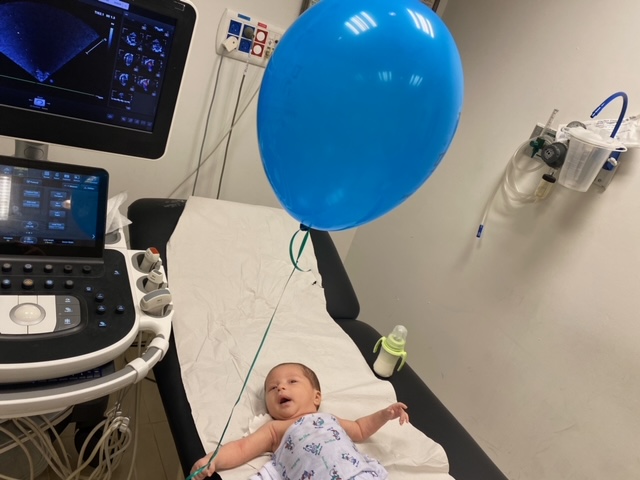 Today Ayub was feeling much better and in the evening coworker Craig and I took him and his mother to the Gaza border. How nice it is to see his mother so happy after having to stay in Israel so unexpectedly. Little Ayub was sleeping peacefully when we arrived at the Erez checkpoint. Praise the Lord! 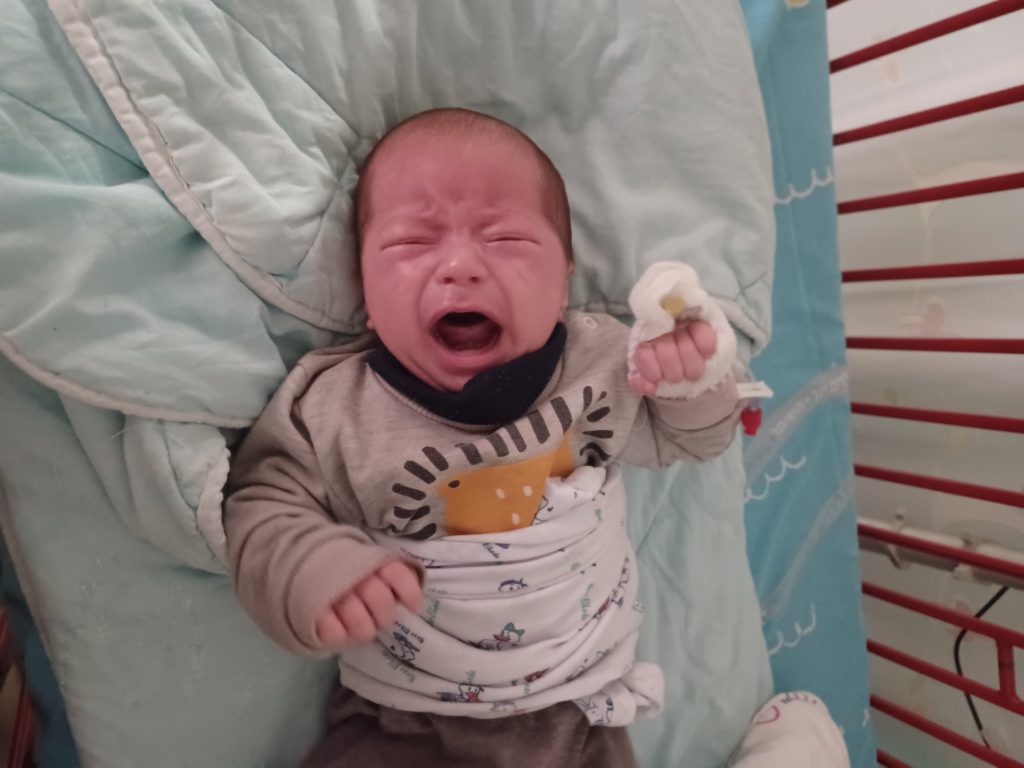 After a night at Sheba hospital, Ayub is doing better today. He only threw up in the morning. The doctor is testing if there needs to be a change in his milk. Also he suspects that Ayub is dealing with a virus, so he will be observed for another night. Hopefully tomorrow the doctor can tell what the best next steps are for Ayub.
When I walked in today, Ayub’s mother was trying to stop his crying. She seemed to stay calm and this had an effect on the baby who became silent. Thank you Lord that You provide. We pray that You bless the doctor in making decisions for this little boy.
Hide Comments Show Comments 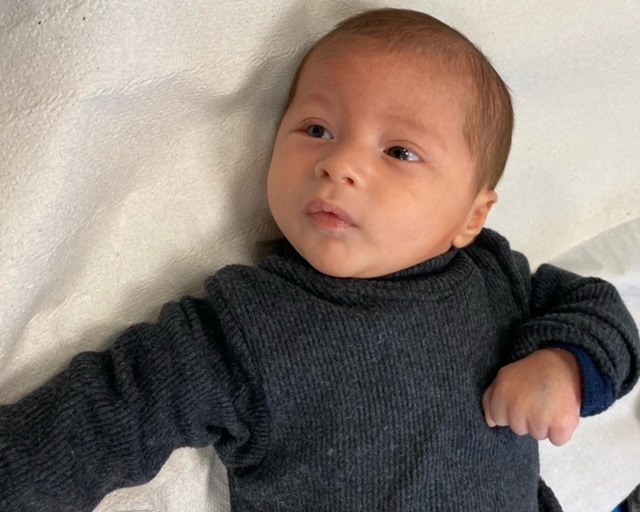 Actually, only an ordinary echo appointment at Sheba Hospital was on the agenda for little Ayub today. When the doctor looked at the results of the same, he drew a positive conclusion. After Ayub’s surgery in September, he is doing well and his heart is in good condition.

However, the fact that Ayub had thrown up frequently in the past few days worried the doctor. The echo did not provide any information about the causes, so the doctor decided to have Ayub checked out in the ER and to observe him for one or two days. 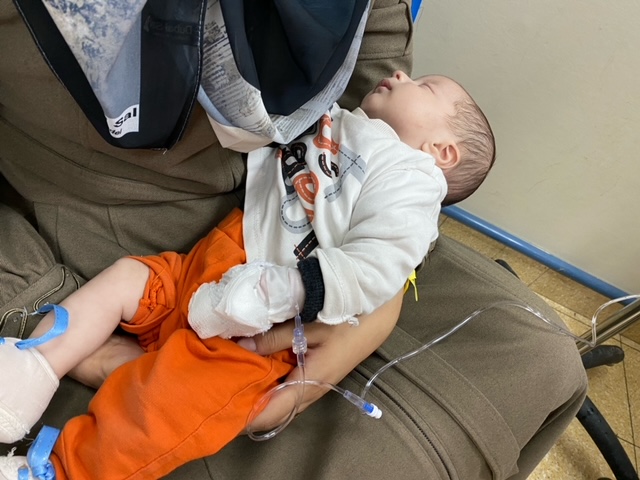 For a day or two: For Ayub and his mother, this meant an unplanned overnight stay that they had not prepared for. Despite this surprise and although Ayub’s mother felt a bit weak, the two bravely endured a blood tests, a corona test, a liquid injection and several examinations in the emergency room. 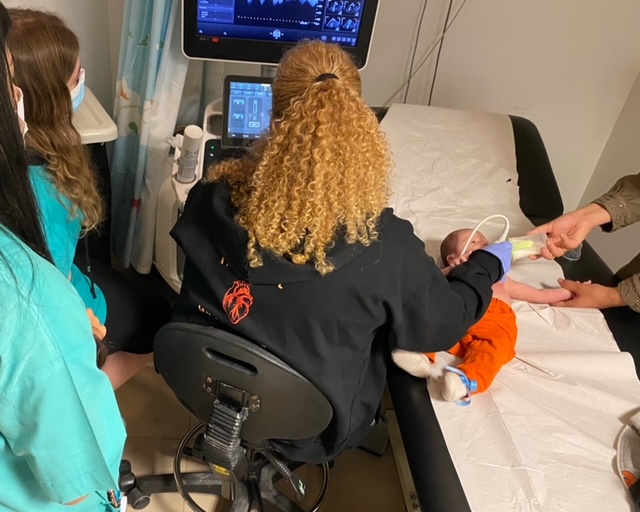 When we go to the hospital tomorrow for visits, we will immediately ask about Ayub and the results of today’s tests. Lord, please give Ayub and his mother a good night’s sleep and recovery.  Reassure them that you take care of them!

Today was a great day for little Ayub as he was discharged from Sheba Hospital to return home to Gaza!

When we came to his room, his mother had already packed all their stuff together and was ready to leave. The discharge itself was pretty easy with no complications and Ayub and his mother were able to spend a lot of time with the other families in the playground area.

It is so wonderful to see Ayub thiswell after his TGA repair surgery. We will see him again in one month for a follow-up appointment to make sure everything is still okay.

We are so thankful for Ayub and his caring mother, that the discharge went so well, and that they could return home today. We pray Ayub will continue to recover well and that the follow-up appointment bring good results! 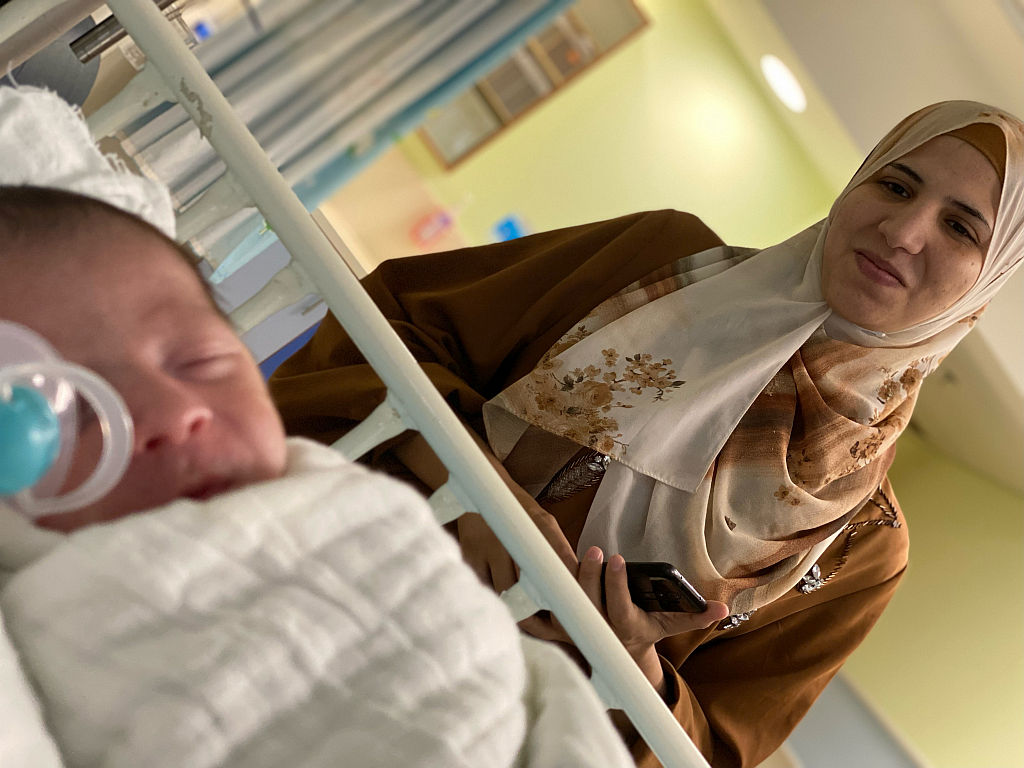 The name Ayub is the Arabic name for Job. He is a prophet in the Koran and also known in the Hebrew Bible in the book of Job. It was so good to talk to Ayub’s mother (via google translate) and be on common ground with the story of Job. In the same way, we read about the struggles Job went through; there is hope in Ayub’s life! Ayub have been without oxygen for two days, and the doctors expect him to go home in the next few days! Thank the Lord for this good progress. We continue to pray for the family and the little prophet Ayub! 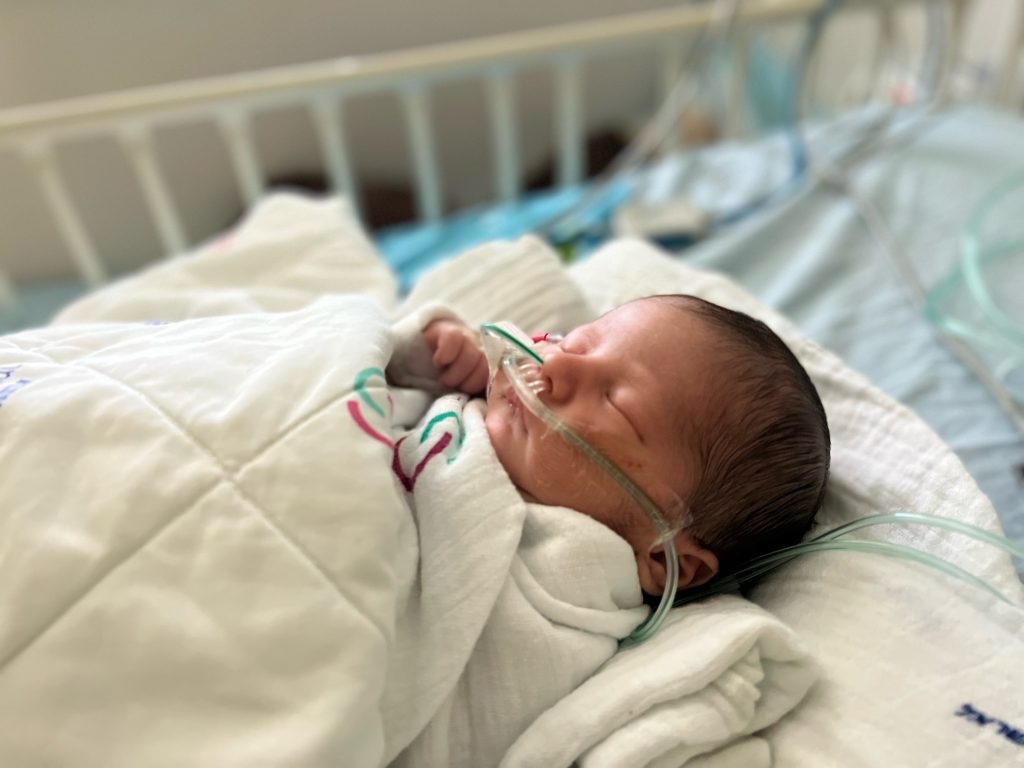 It was a sweet moment to see precious little Ayub and his mother today at Sheba Hospital. He was sleeping very peacefully during our whole visit.

As we were talking to the very attentive staff surrounding Ayub, we got the hopeful news that he is doing really well and if he starts eating on his own, he can do without the nasogastric tube and could possibly be going home on Sunday already!

We continue to pray for the great work our Heavenly Father is doing in Ayub and for the skills and caring of the medical staff at Sheba! 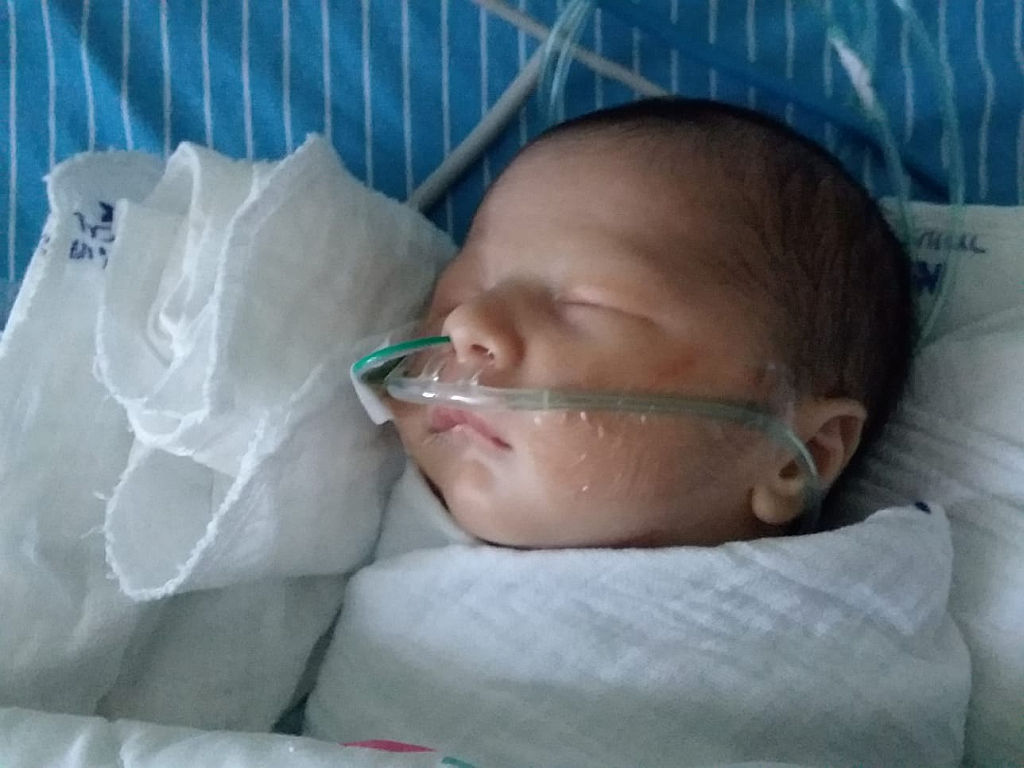 I went to Sheba Hospital today to visit a few children. One of them was little Ayub. Ayub has been moved from the pediatric ICU to the secondary pediatric ICU.  This is always a good sign as it indicates the child is doing better, which Ayub is.

The nurse indicated that the circumstances are going well, however Ayub is still getting oxygen help.

Prayers for his complete recovery.

Today was a long day with tree trips to the Gaza border to pick up and leave mothers and their children. It is a certain atmosphere there that only can be felt and is hard to describe in words. It was great to also visit the Sheba hospital for the first time this afternoon.

When we arrived there, almost all parking spaces were taken, but we managed to get a place at the end of the big complex after dropping off the mothers and the children. Sheba hospital is one of the biggest hospitals in Tel Aviv. I am amazed how these young volunteers that have just been here a month, guided me along and knew all the details and procedures.

After being greeted by so many nice staff who helped us with some paperwork, it was time to see the children in the ICU. 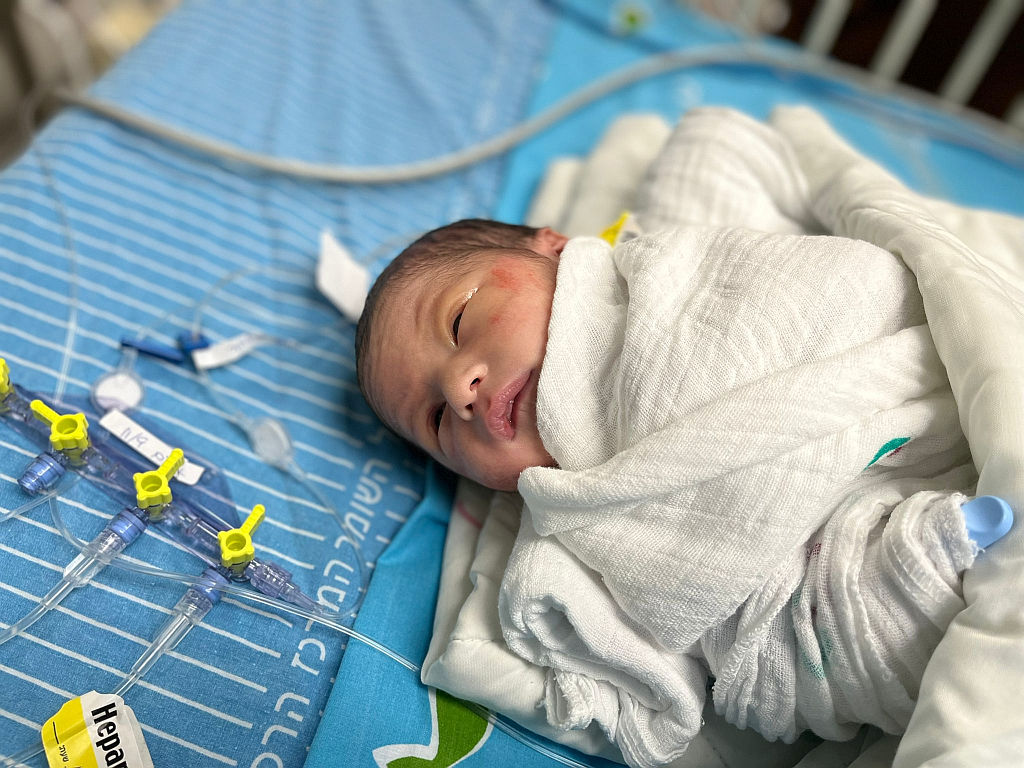 Ayub is one of the children from Gaza. He had his TGA repair surgery Sunday 11 September. When we visited him today, his mother was so happy to see the volunteers from Shevet Achim again. Hear whole face lit up. You can tell that these daily visits from people who care about their wellbeing and their children, means a lot to them. 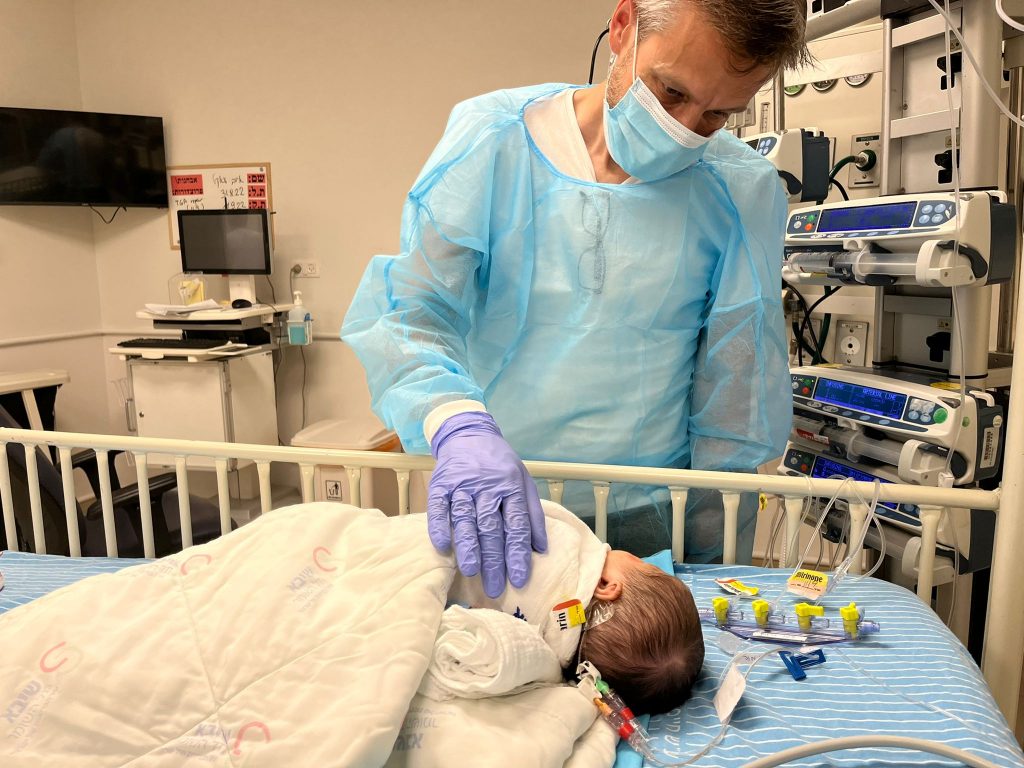 It was so amazing get eye contact with Ayub, and to lay may hand and pray life and health to this tiny little child that is so loved by our Father in heaven. When we talked to the doctors, they were excited that the operation had turned out so successfully, and Ayub’s health improved better than expected. The doctor hopes to move Ayub from the ICU to the secondary ICU any day now.

We pray that Ayub’s health will continue to improve in the fast manner in which he has already done  thus far. 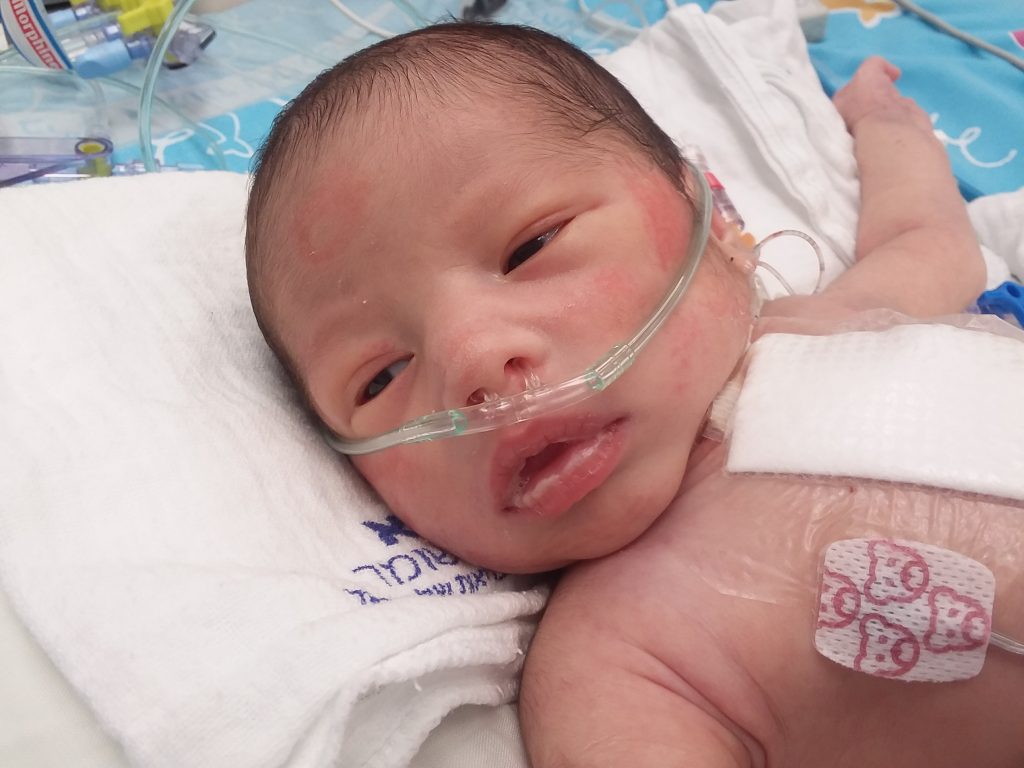 Our new baby Ayub is doing well after his surgery at Sheba Medical yesterday. Doctors were able to extubate Ayub, and he is even opening his eyes now.

He is very cute, and so tiny! His mom is also very sweet, and showed me pictures of Ayub and his older brother – they look very much alike! His mom is very happy today with how well Ayub’s doing. Praise God! 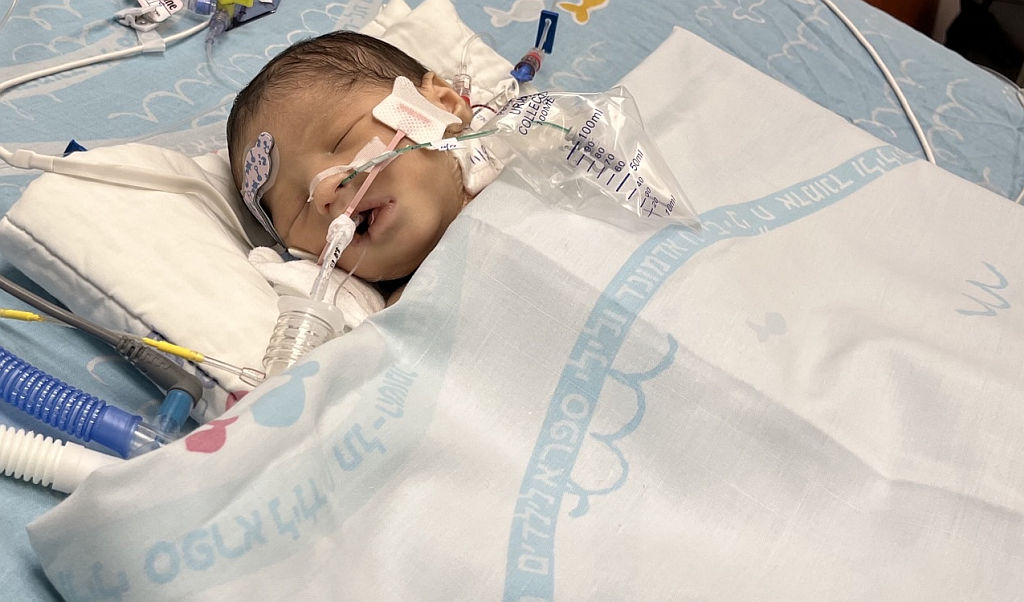 Eleven day-old Ayub from Gaza had a successful surgery at Sheba Hospital today.

This morning we found out that he will have surgery today, so we were able to sit with Ayub’s mother and comfort her. She was very worried for her newborn baby, but after six hours we were able to see that tiny Ayub was doing well. A nurse told us they are very happy with the surgery’s outcome.

This afternoon,  Ayub was still sedated and will stay so through the night to get some rest. If he does well, they will wake him tomorrow in the morning and remove his breathing tube.

Praise the Lord for Ayub’s successful surgery. We pray for strength and peace for his mother and for Ayub. 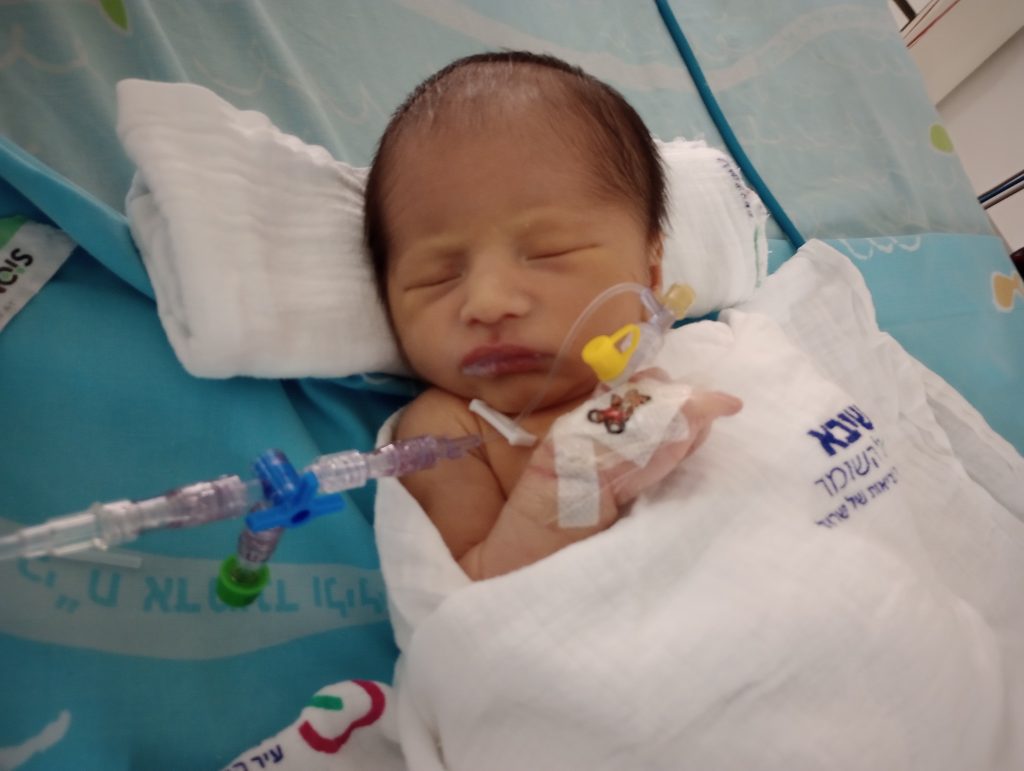 This morning we heard the good news that Sheba Hospital finally agreed to accept little Ayub from Gaza, a new emergency baby. 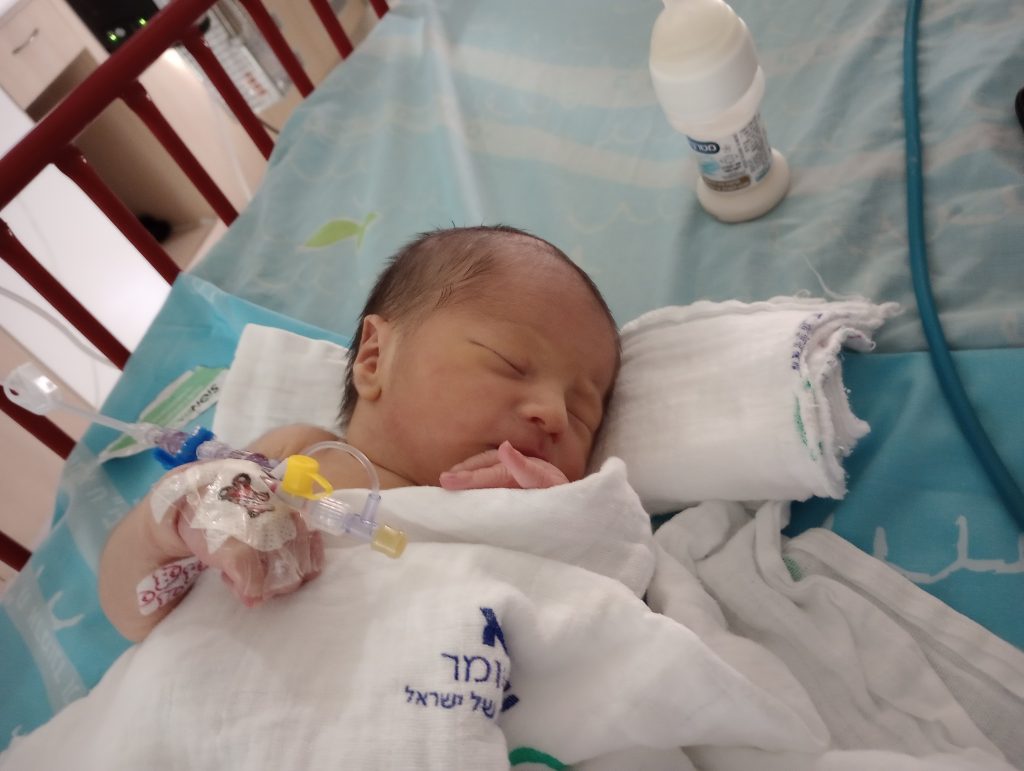 His journey to Israel today was quite exciting, as in the middle of the way from the border to Sheba, the machine pumping life-saving medicine to Ayub, stopped working.

The ambulance had to make a quick stop at the Assuta hospital in Ashdod where they fixed the problem before they could continue their way to Sheba. 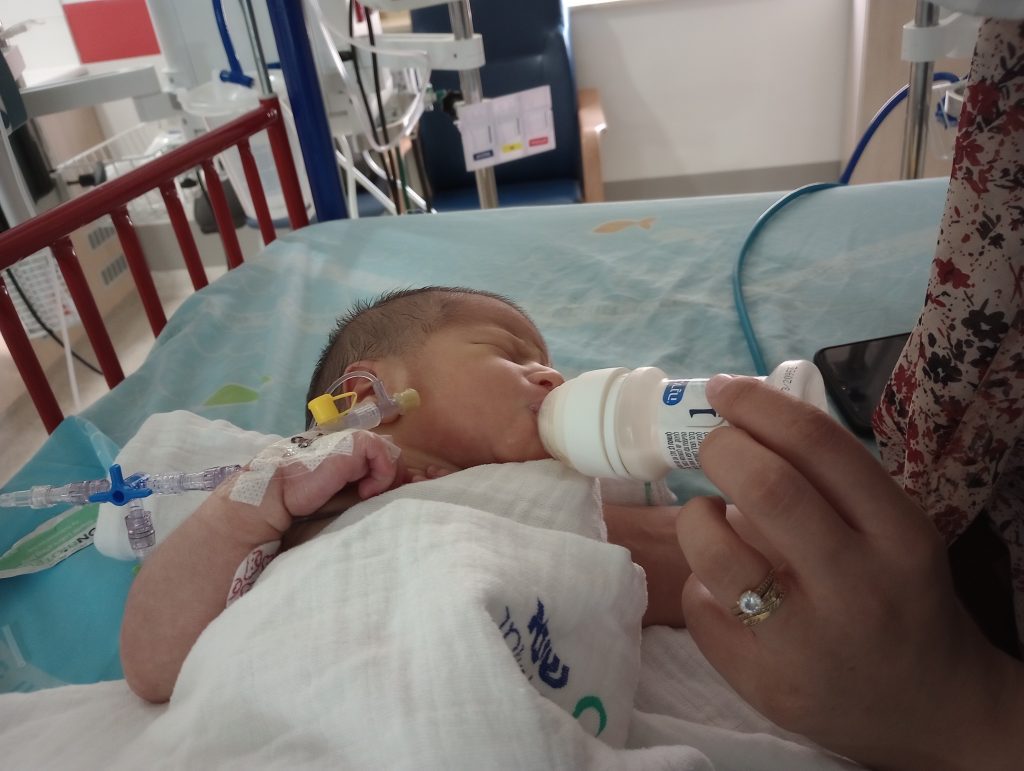 Early this afternoon we could finally welcome him and his lovely mother in the ICU at Sheba Medical. The doctors directly started with some examinations including blood tests and an echo and in the next days they will make a surgery plan for him. 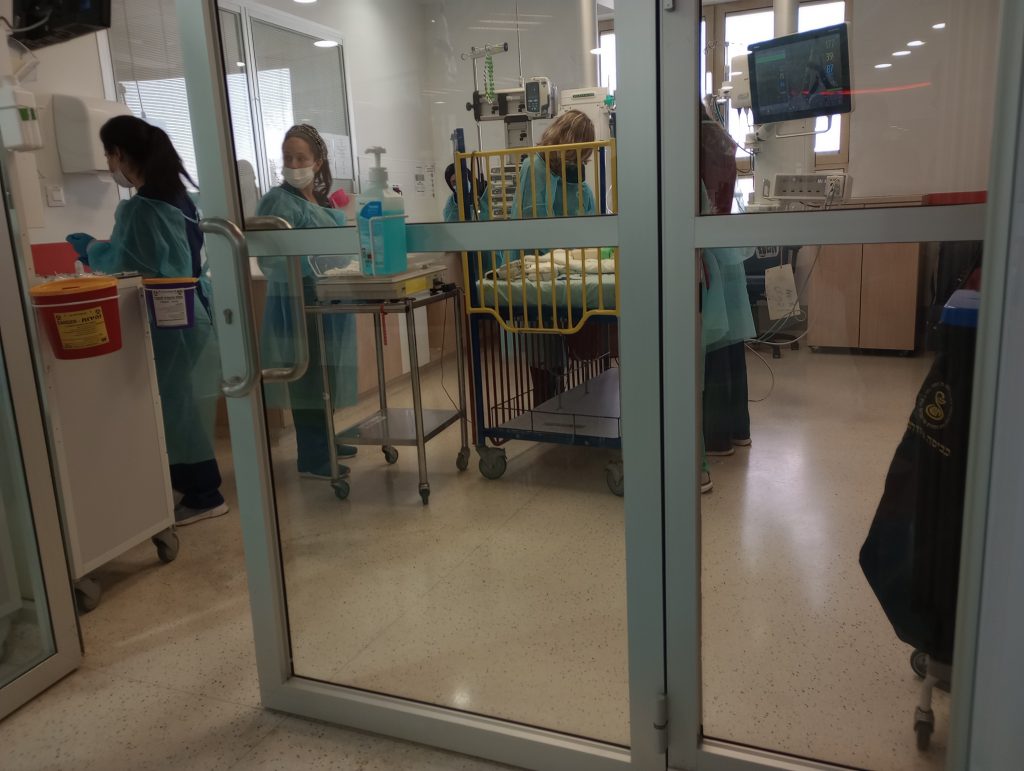 We hope that Ayub will have his surgery very soon as he has transposition of the great arteries and needs surgery very early in his life.

His mom is very cute and kind but was also very tired after this day as they have been in three different hospitals today.

Please pray for our new little boy and his lovely mother! 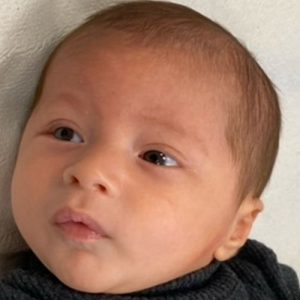 Ayub is a months old child from the Gaza Strip diagnosed with transposition of the great arteries.

Ayub does not yet have a local leader to advocate for prayer and financial support for his surgery.

As of right now, Ayub still needs $6000 toward surgery and related expenses.