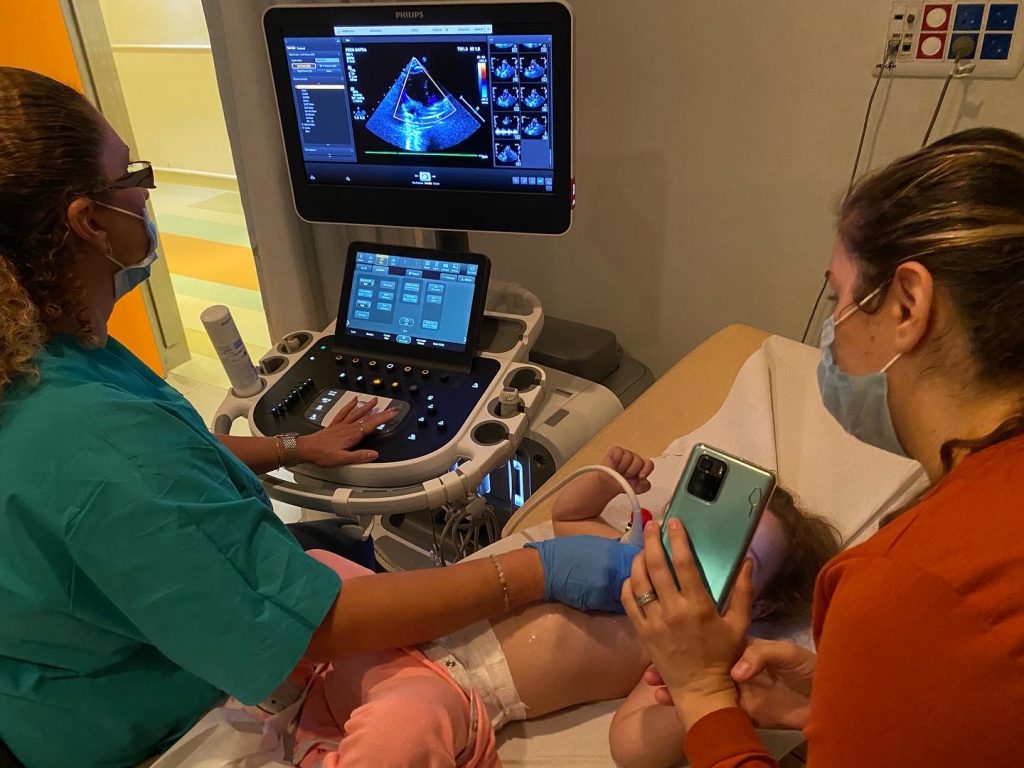 Dea went to Sheba hospital today for a scheduled follow up from her stent placement; an echocardiogram and EKG were both done.  Dea and her mother were so happy to find out that she has been released to go back to Kurdistan!

We are so excited for the news too! 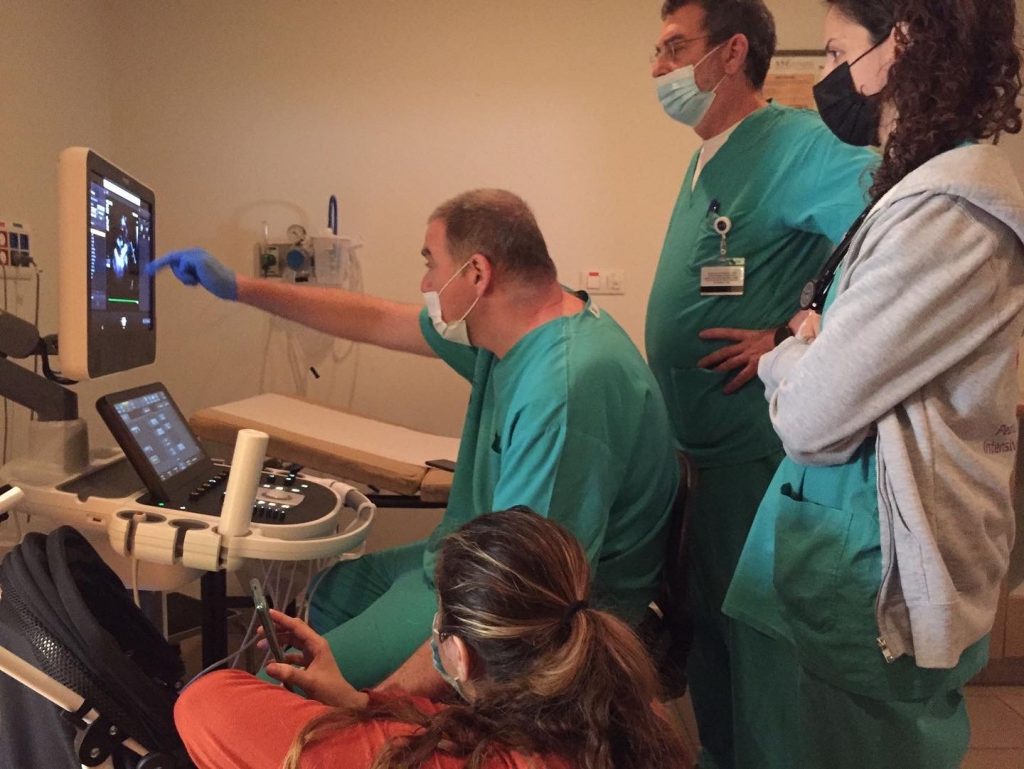 Dea’s oxygen levels were in a range from 86-92 today. We know doctors had planned to do a surgery for Dea and were unable to do so due to certain risks, but we are very thankful the stent placement has proven sufficient for now until she is older.

Thank you so much for all your prayers. 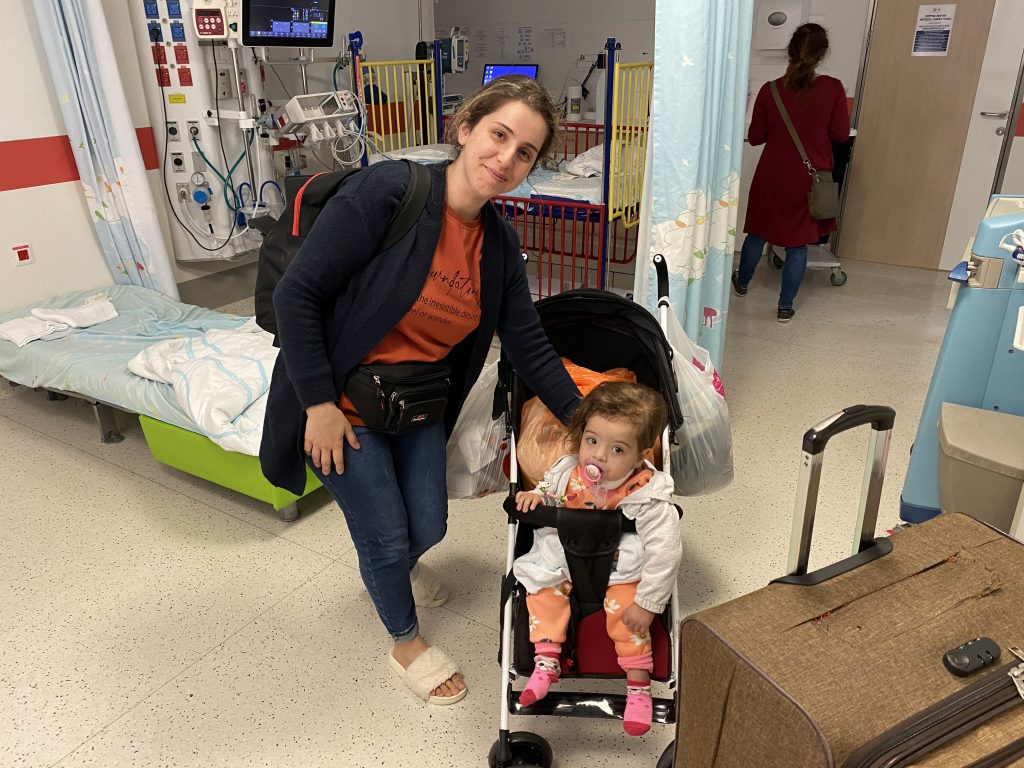 We were very excited to hear the news today that Dea was going to be discharged from Sheba hospital. Dea and her mom both slept well last night and Dea’s oxygen and vital signs continue to remain stable. 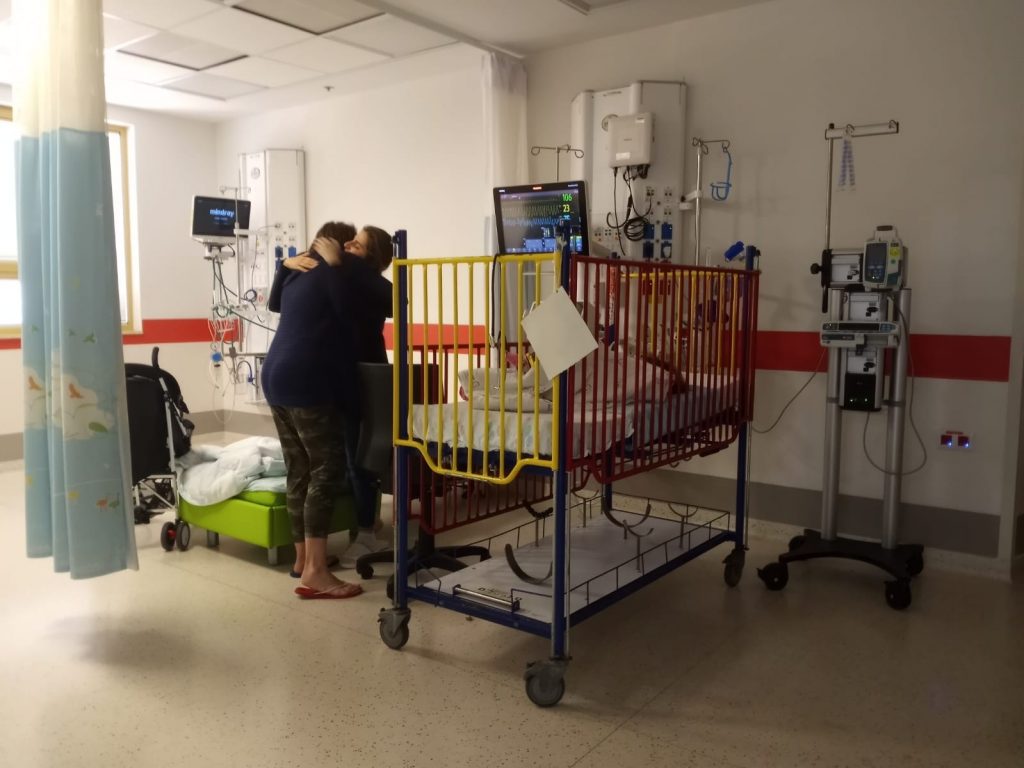 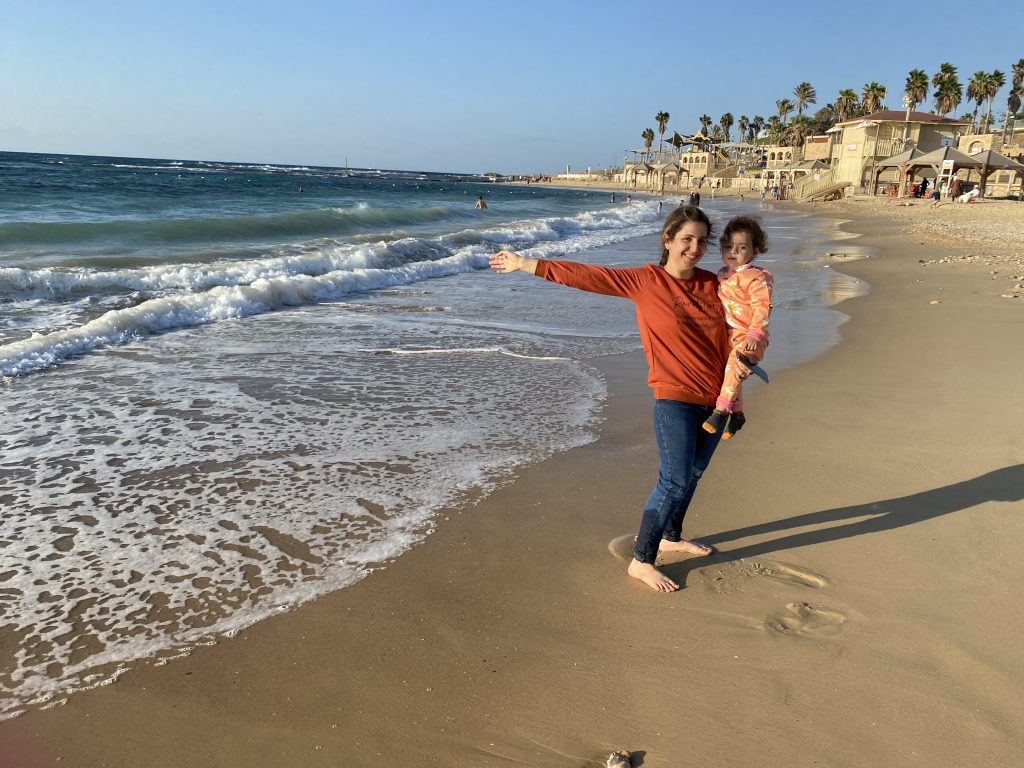 Dea’s mom wanted to go see the beach when we arrived at the community house, so I accompanied them both.  Dea was able to see the ocean for the first time in her life. What a joy! Thank you to everyone who has prayed for this child.
Hide Comments Show Comments 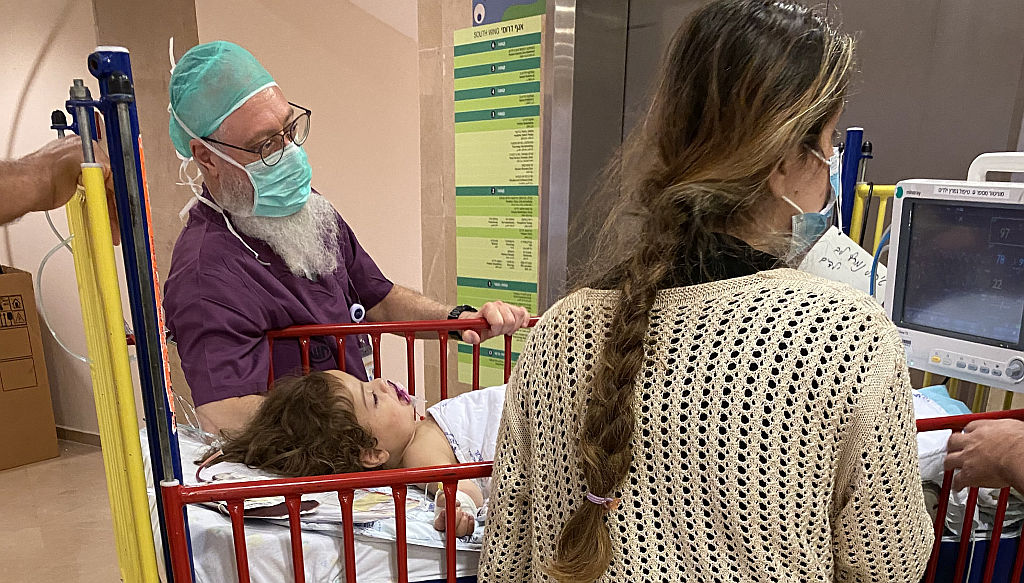 At Sheba hospital this morning, Dea had her catheterization and stent placement. She came out of her procedure with no supplemental oxygen and was maintaining oxygen levels mostly in the 70s. 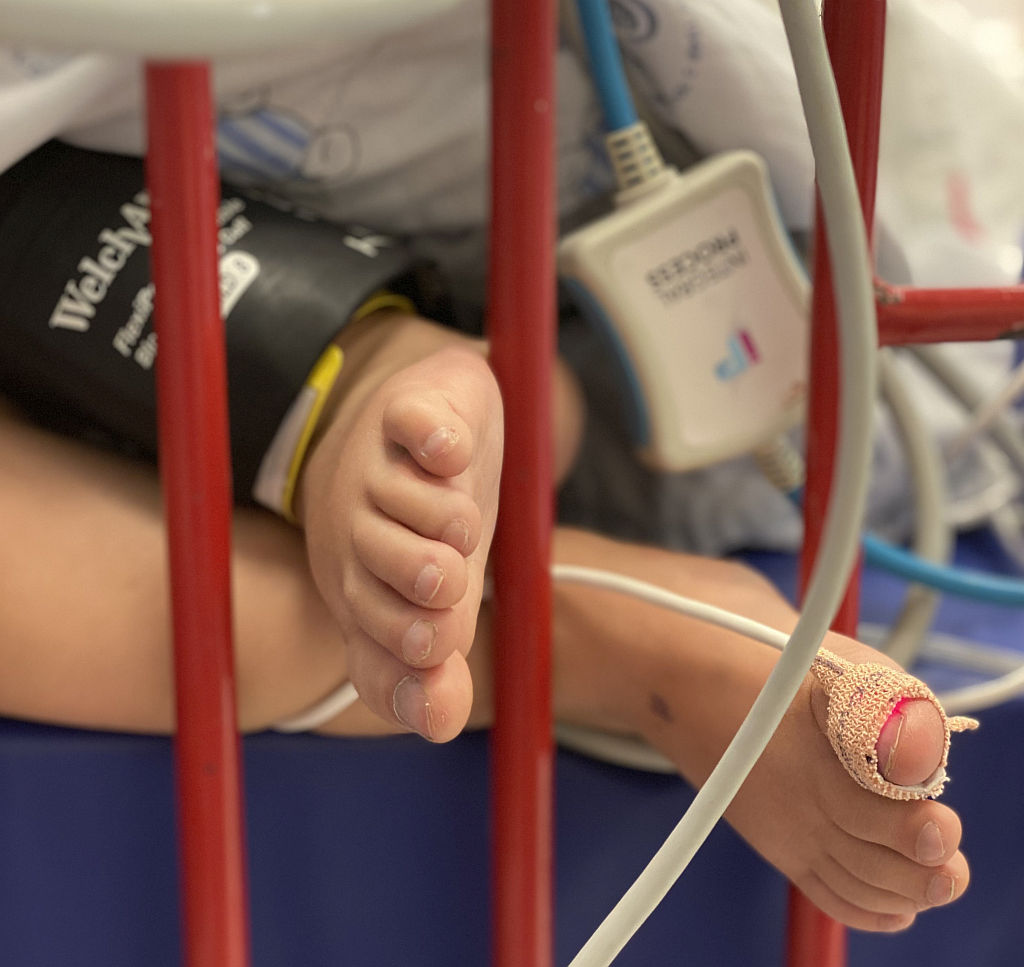 We were so excited to see her pink toes and fingers! 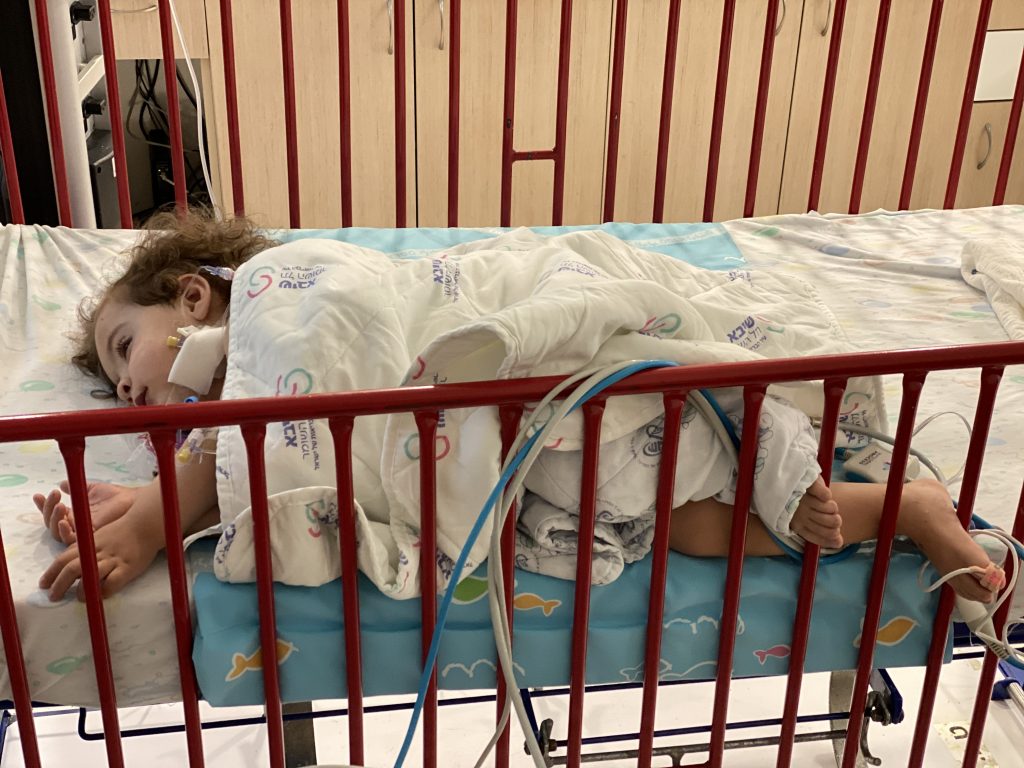 Dea’s mom was able to get some sleep and shower while I watched Dea. 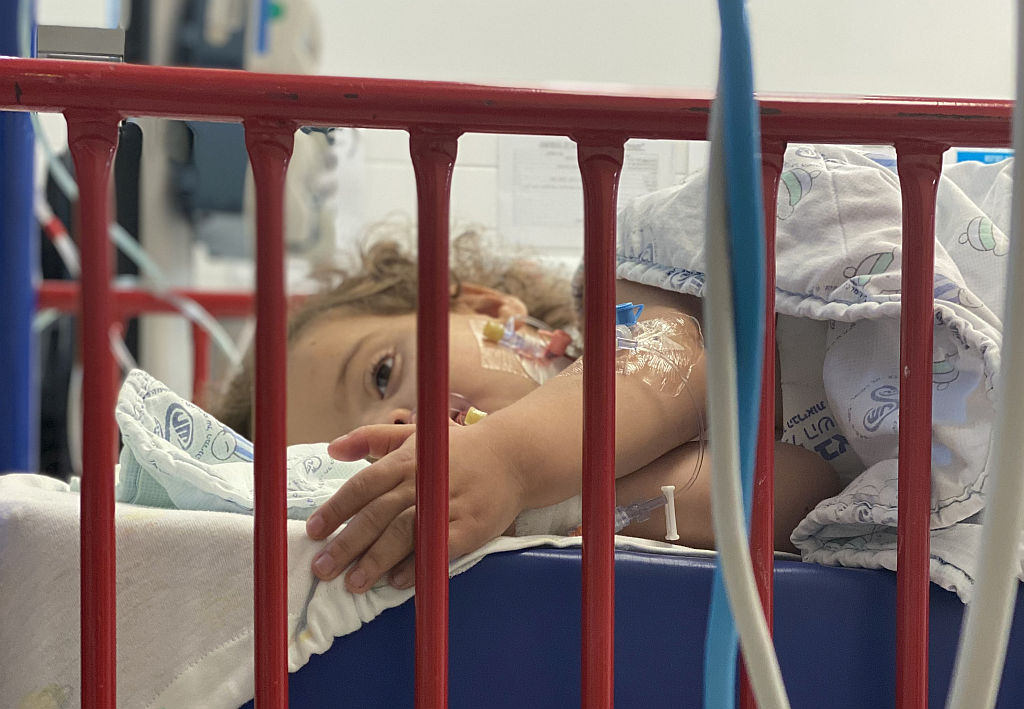 Dea was able to eat, rest and watch some videos. She laughed at me while playing with her.
We are very thankful to everyone who has helped with Dea’s procedure and to the wonderful staff in the Sheba pediatric ICU that are very attentive to Dea’s care.
Hide Comments Show Comments 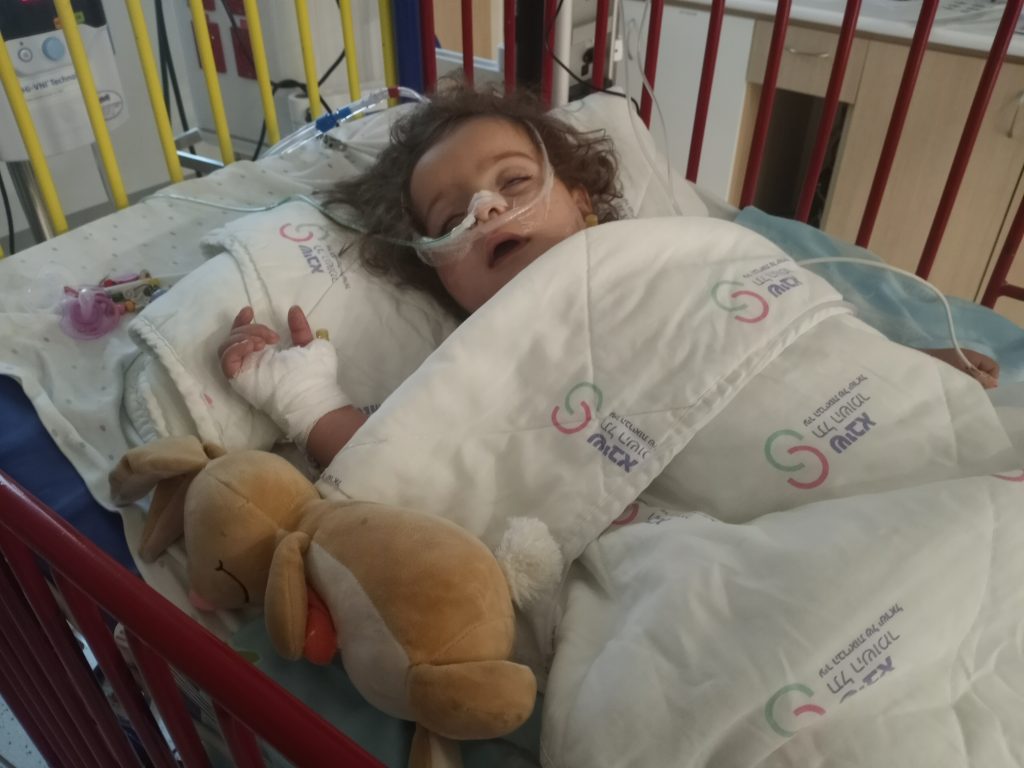 In the early morning, Dea desaturated into the single digits. She was immediately taken up to the Sheba hospital pediatric ICU, where doctors worked to stabilize her. Thankfully they were able to avoid putting her on mechanical ventilation and used instead oxygen and sedation to keep her calm.

Since last Thursday, she had been having episodes of spontaneous desaturation which apparently also occurred frequently in Kurdistan. However Dea’s instigating episode lasted a few minutes and then she went back to normal, but as it happened again on Sunday morning, Jonathan understood the best place for her would be in the hospital.

Yesterday, doctors said that technically, Dea could be discharged to our house, but they will keep her because we didn’t think she was well enough. I am so thankful they kept her, as she was already in the hospital when another episode happened this morning, really I thank God.

The hospital was the best place for her to be. Please be praying for Dea, her heart problems are complex and the doctors will discuss her case tomorrow. As we pray for Dea’s future, we can also thank God for watching over her in this past week, and especially for Teresa, a visiting nurse from the States who escorted Dea and has been quarantining with her and another family in Jerusalem. 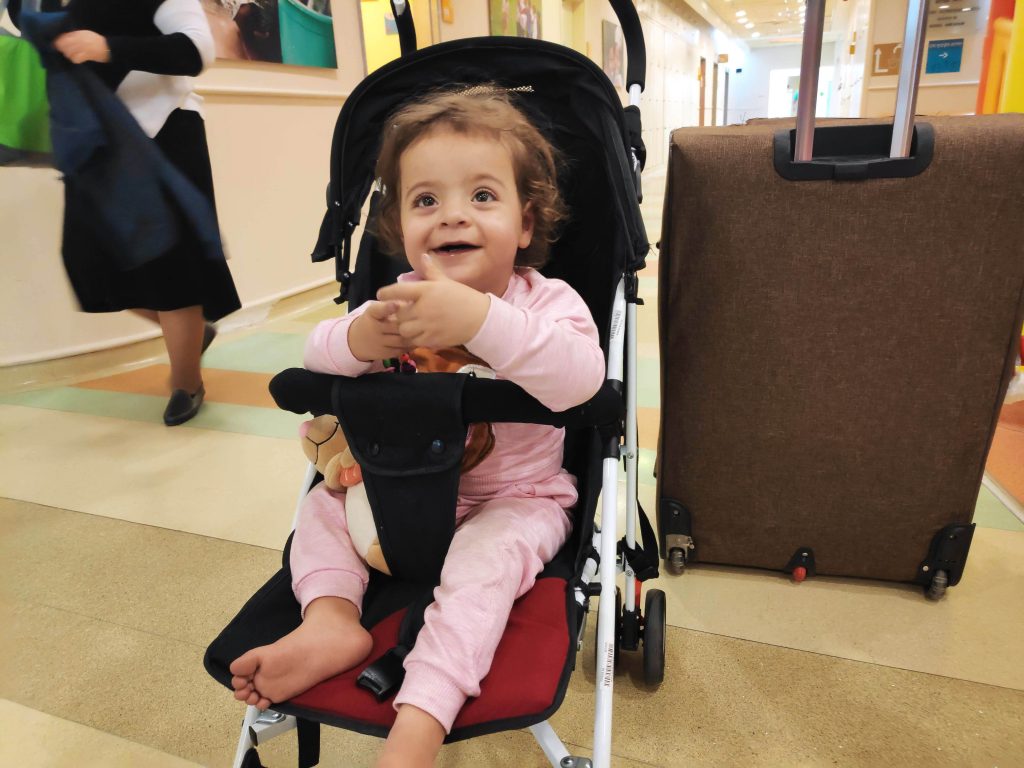 Lovely Dea and her mother are still in quarantine in Shevet’s Jerusalem guesthouse, but they had to come to Sheba Hospital again today. These past three days, Dea has been experiencing episodes of a few minutes each in which her oxygen plummets to around 40%. She becomes sleepy, and her fingers and toes become blue. Then she recovers. 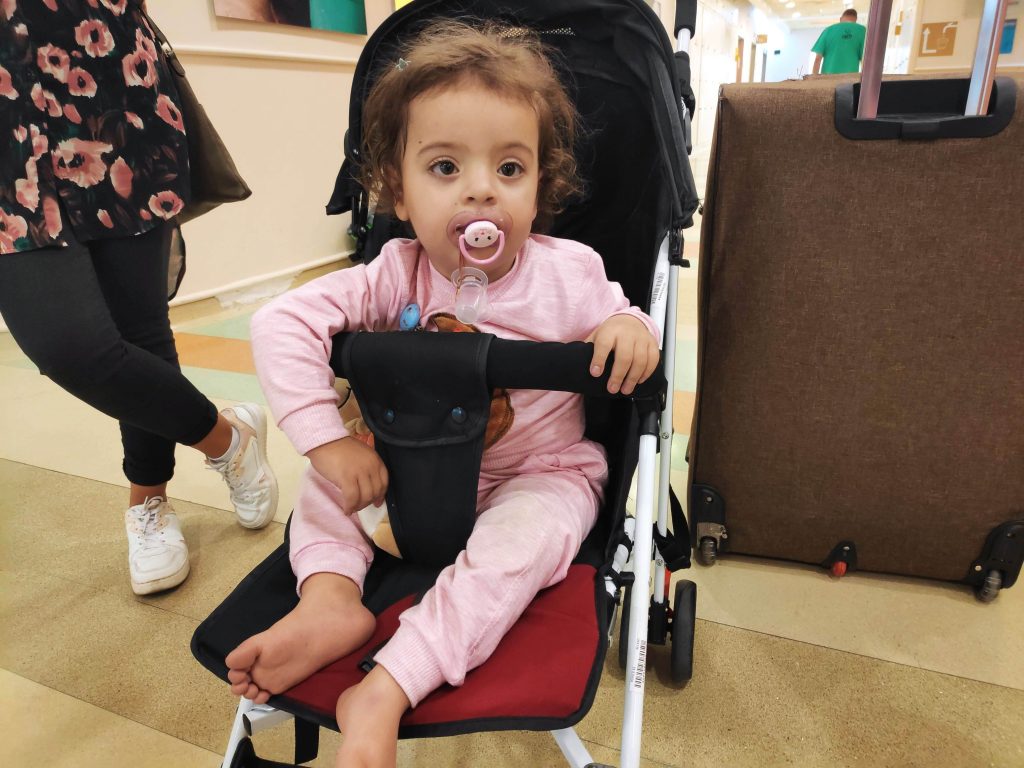 She is admitted to the hospital now, as this recurring episode has the potential to become dangerous for her.

Today I had the opportunity of meeting Dea and her lovely, friendly mother and got to know them very well as we spent time together while waiting for her room. Dea is a very cute and active girl and easy to love.

Dea’s oxygen levels are in the 80’s now, which is her baseline so that is good. Please be praying for them that they might settle in well to the hospital; everything is new for them at the moment. 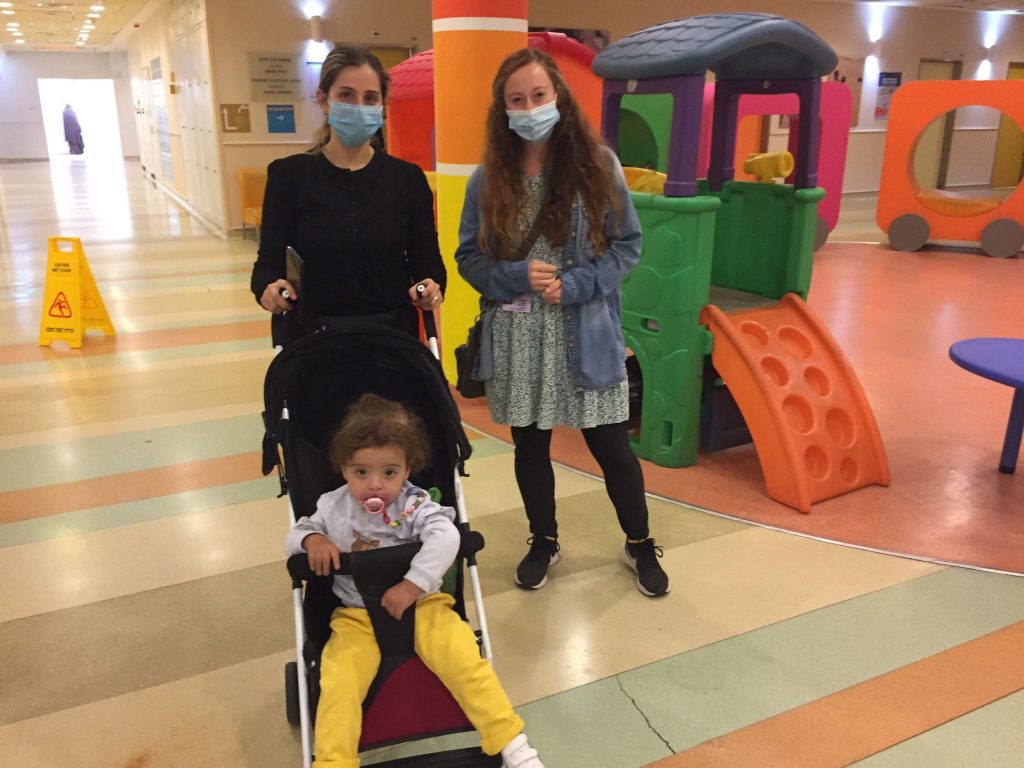 This morning co worker Teresa observed that Dea’s oxygen was 61%, and her fingers and toes had gone blue, and for a few minutes, Dea went very sleepy and limp. At Sheba hospital, the cardiologist said to bring Dea to the clinic for an assessment. The episode did not re-occur today. By the time Dea was at the hospital, her oxygen was in the 80’s. The doctors treated this as her first appointment and did a full study of Dea’s heart. She needed some sedation because she was inconsolable every time she saw anyone that looked remotely like a doctor coming close to her. 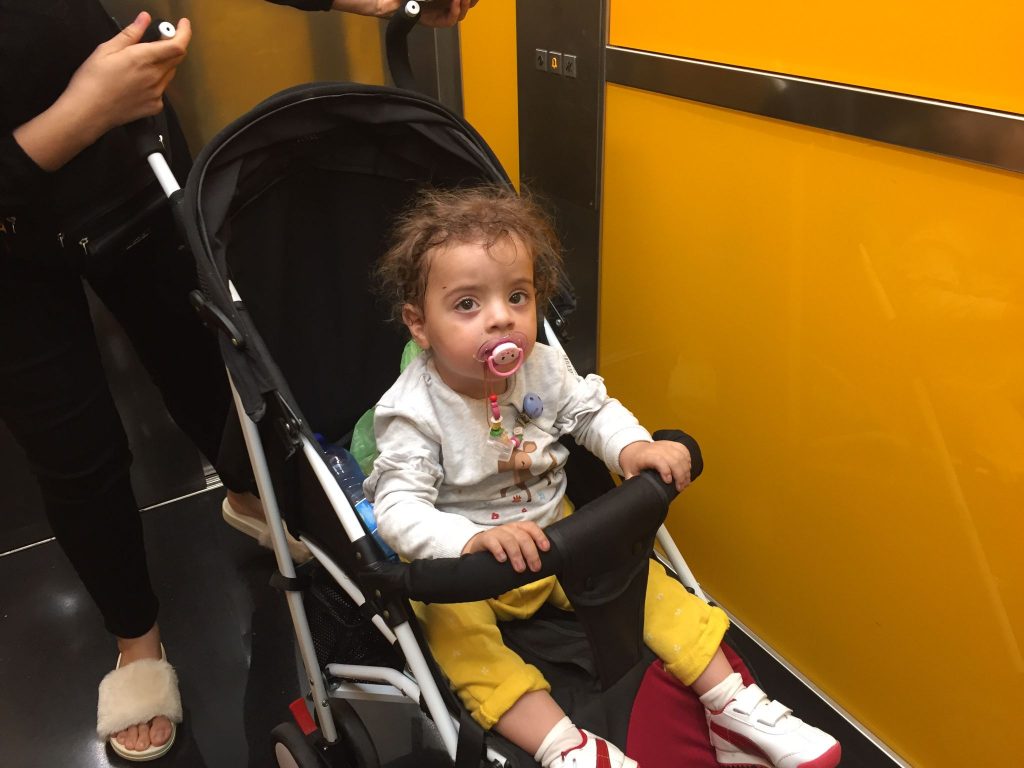 Dea’s heart defect  is not ‘by the book’ and due to the complexity of it, she might need a CT scan first.
After the appointment, we waited an hour for Dea to recover from the sedation and then she and her mother were cleared to go back to Jersualem to continue their quarantine. Please be praying for this little one.
Hide Comments Show Comments 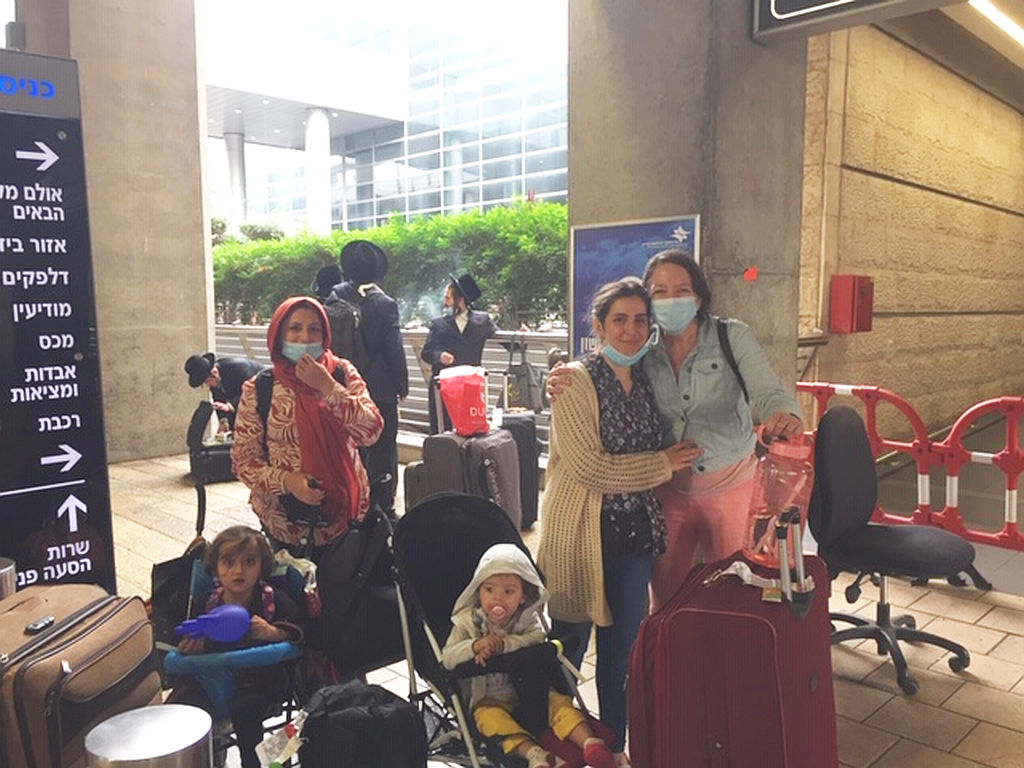 Yesterday, co-worker Bria and I went to Ben Gurion airport to welcome Dea and her mother and Yano and her mother, both mothers and daughters having traveled all the way from Kurdistan. Their visas were going to expire, so we had to bring them now even though Dea’s surgery may take some time still. 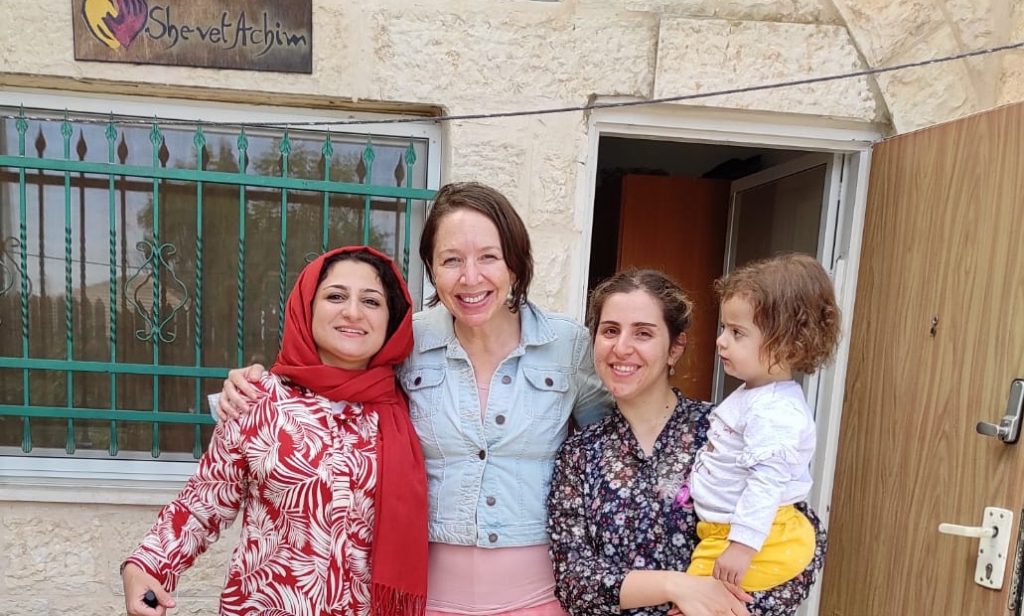 Teresa, the escorting nurse, arrived on time to Sulaymaniyah, in the north of Iraq, to be able to fly with them and bring them to Israel safely; we thank God for His perfect timing in everything.
Dea and her mother, on right above, are quarantining now in our Jerusalem guesthouse. Theresa is quarantining with them as well, hopefully they can be out in a week just in time to have their first assessments at Sheba hospital. 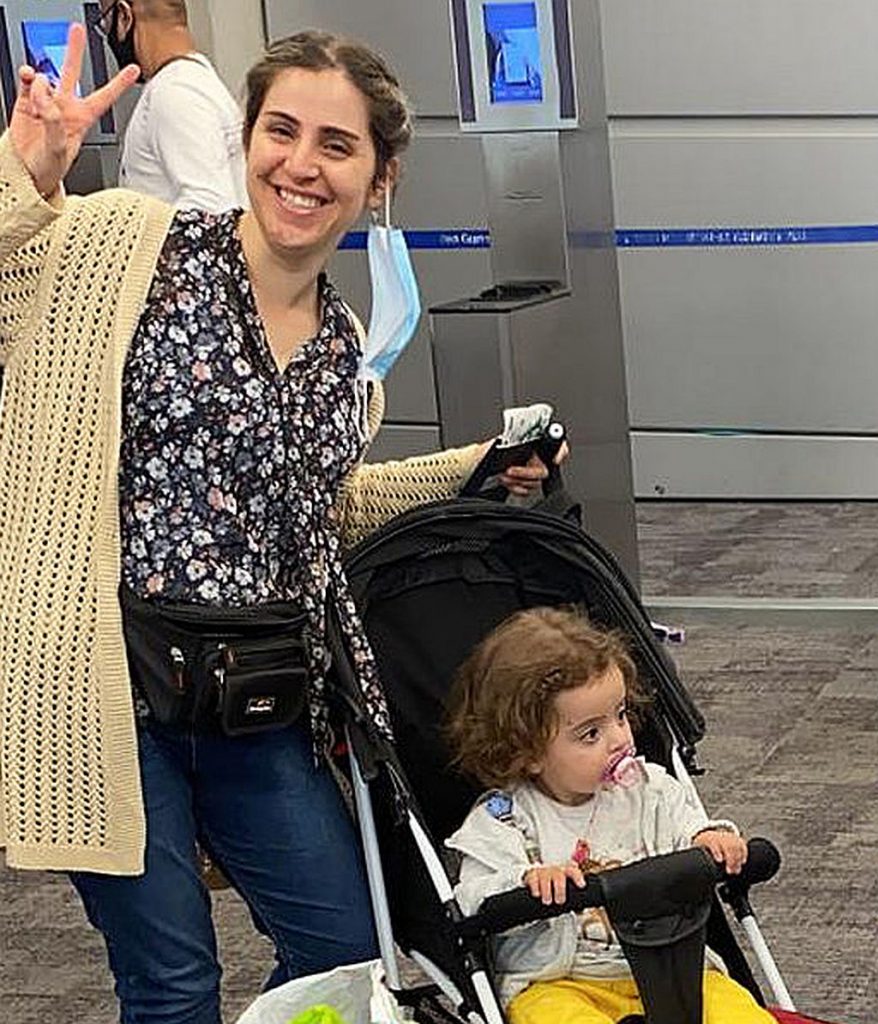 Dea’s mom is excited about being in Jerusalem and we hope it will be a big blessing to them as they now wait for their procedures.
Hide Comments Show Comments 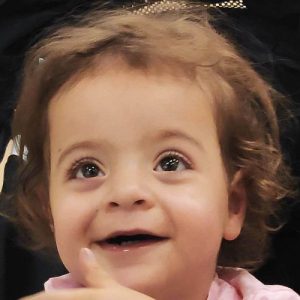 Dea does not yet have a local leader to advocate for prayer and financial support for her surgery.

As of right now, Dea still needs $11000 toward surgery and related expenses.