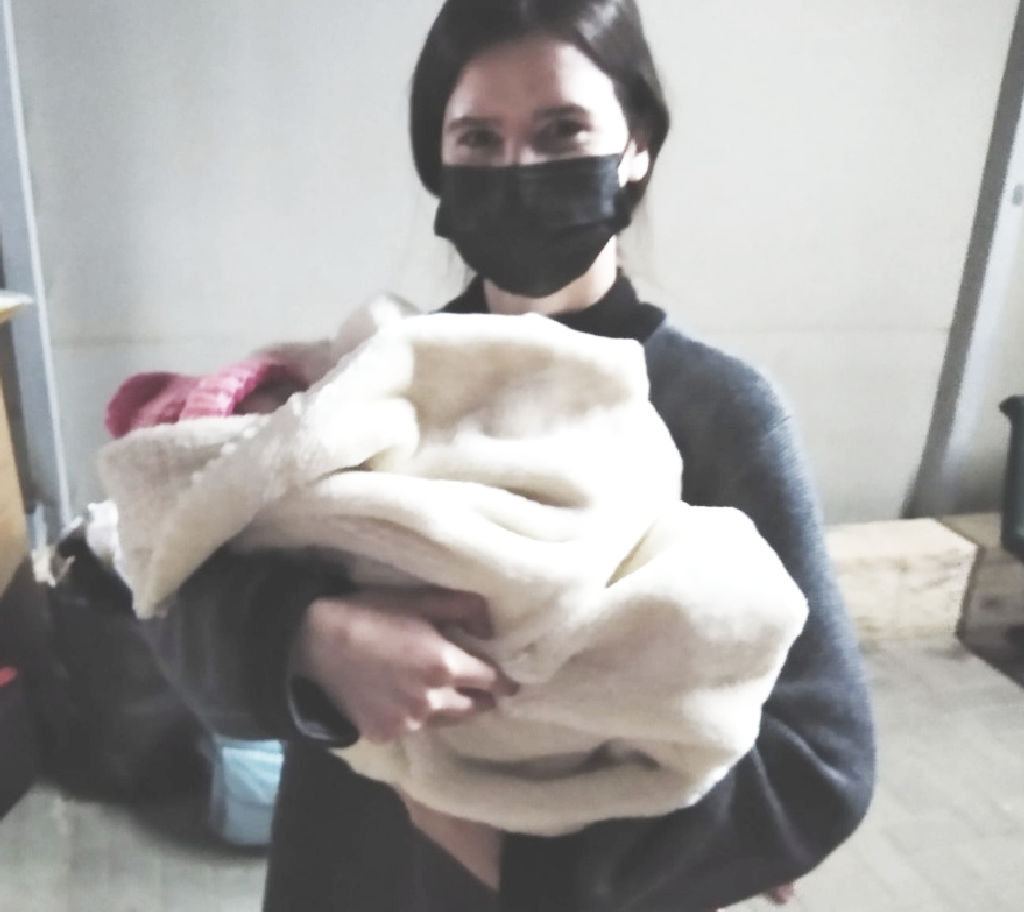 Nadeen was able to return home to Gaza today after her successful surgery last month. Nadeen’s mother was very excited to go home, and Nadeen was looking very well and happy.
Nadeen will be having a follow-up echo next week in Gaza. In two month’s time she will be returning to Sheba Hospital for an echo.
Please continue praying for Nadeen that she will continue growing well in Gaza.
Hide Comments Show Comments 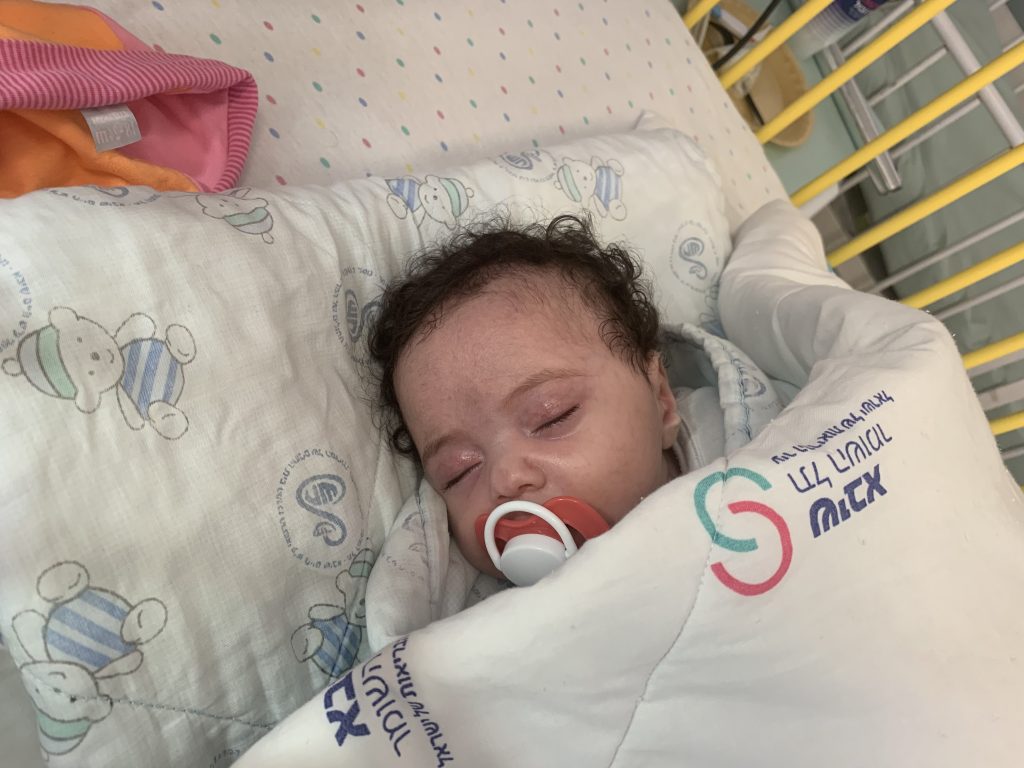 The doctor at Sheba Hospital told me that Nadeen looks better than ever before. She will have a follow-up on Wednesday with the cardiologist. It is hoped that discharge will be declared at that time and Nadeen’s mother will be told how much medicine Nadeen will still need for her life in Gaza.

We hope very much for a good outcome after the examination since Nadeen and her mother are in the hospital for quite a long time. Meanwhile, the doctors are giving Nadeen a different milk and are trying to make her body used to it. Also, Nadeen is receiving an important vaccination for children, which Shevet Achim made possible for her.

Nadeen’s mom is very nervous about the medication, as she will be responsible for administering it in Gaza. So please pray for Nadine’s mom regarding this concern, and for little Nadeen, that she can be discharged this week. 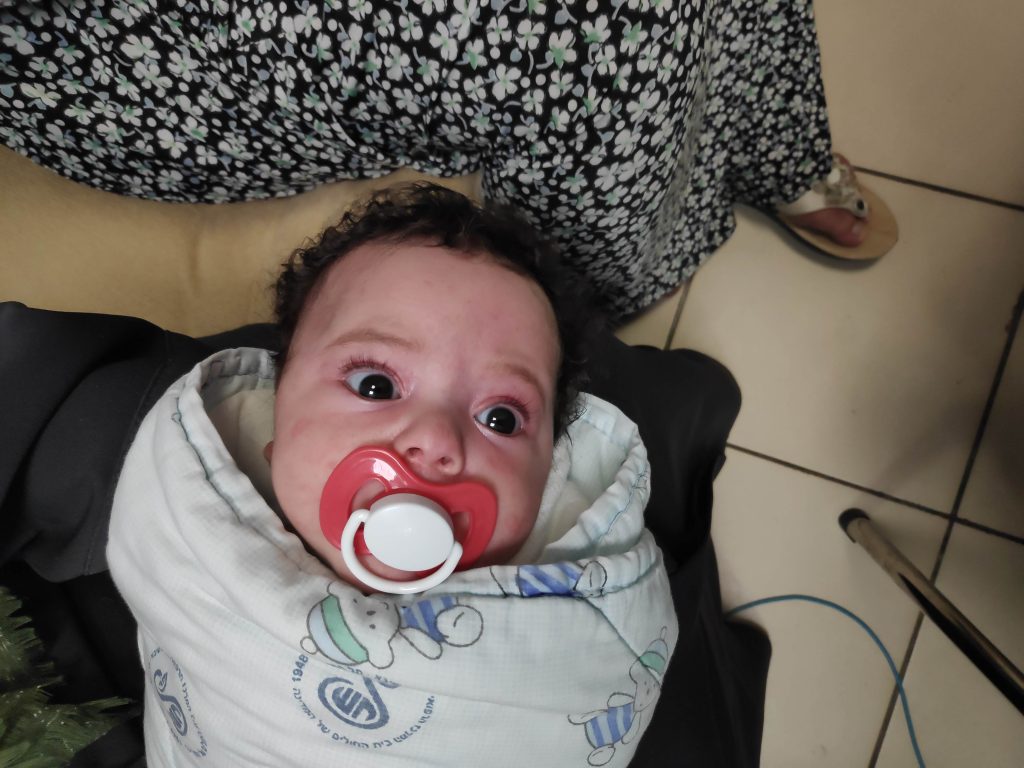 Cute little Nadeen was moved over the weekend to a general floor of the Children’s hospital building on Sheba Medical Center grounds.
Today marked ten days after she had her stomach surgery. When I visited her and her lovely mother today, she was wide awake, on the lap of her mother, looking at me with her beautiful eyes.
I asked her doctor today how she is doing and he said overall she is recovering really well. There is a small infection around her wound and she developed a fever during her time in the ICU. They are treating it with antibiotics and are planning to remove her sutures from the wound in the coming days.
Nadeen is receiving her food not via a Nasal Sonda anymore, which is really nice, but is able to drink milk from the bottle. Praise God for this progress. The doctor said though that Nadeen will need to stay in the hospital at least until the end of this week, as she still needs some time to recover fully.
Nadeen’s mother is really looking forward to going home, since she has other children at home, but she also just wants the best for Nadeen. Please keep praying for little Nadeen and her mother.
Hide Comments Show Comments 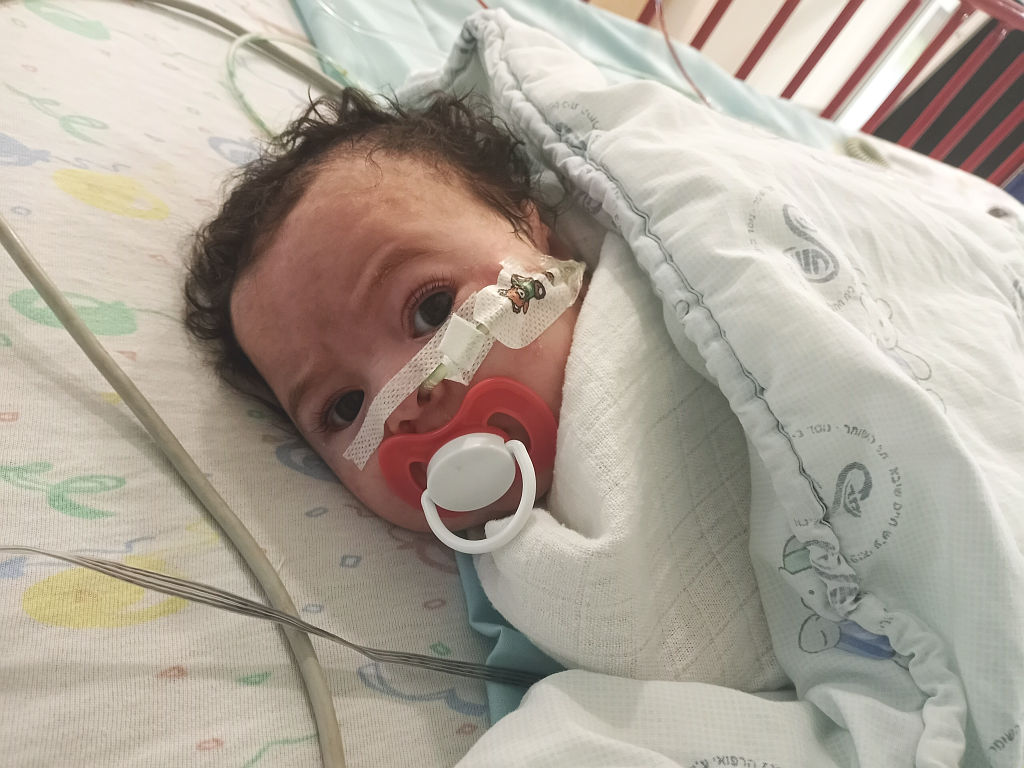 After hopefully the final procedure before she goes home to Gaza, Nadine is recovering well three days after her stomach surgery at Sheba Hospital.

She was in the Pediatric ICU, but is only waiting for a space to move to a general floor. She needs to recuperate taking milk again, but please pray for this girl, that her time is close for going back to Gaza. 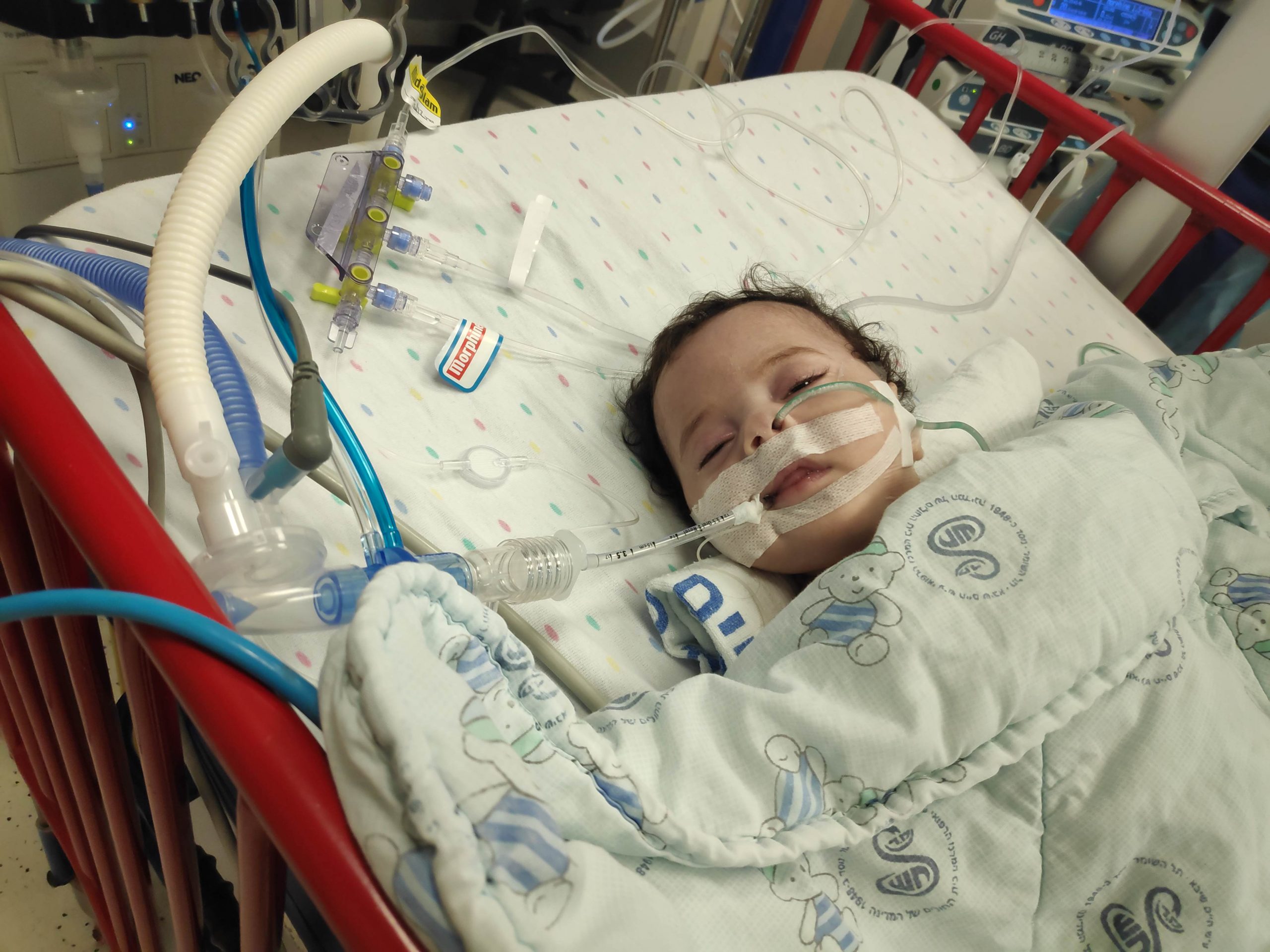 Thank God, cute Nadeen finally had her intestine surgery today at Sheba Children’s Hospital, and it went very well. It took around two hours.
During the waiting time, I was sitting with Nadine’s mother and she shared with me that she has six more children at home, who are waiting for her. Nadeen and her mother have been in Israel for two and a half months now.
After Nadeen had her surgery, she was taken into the ICU and is intubated. Please pray for a good and fast recovery now for Nadeen and that she and her friendly mother are able to return to their home in Gaza soon.
Hide Comments Show Comments 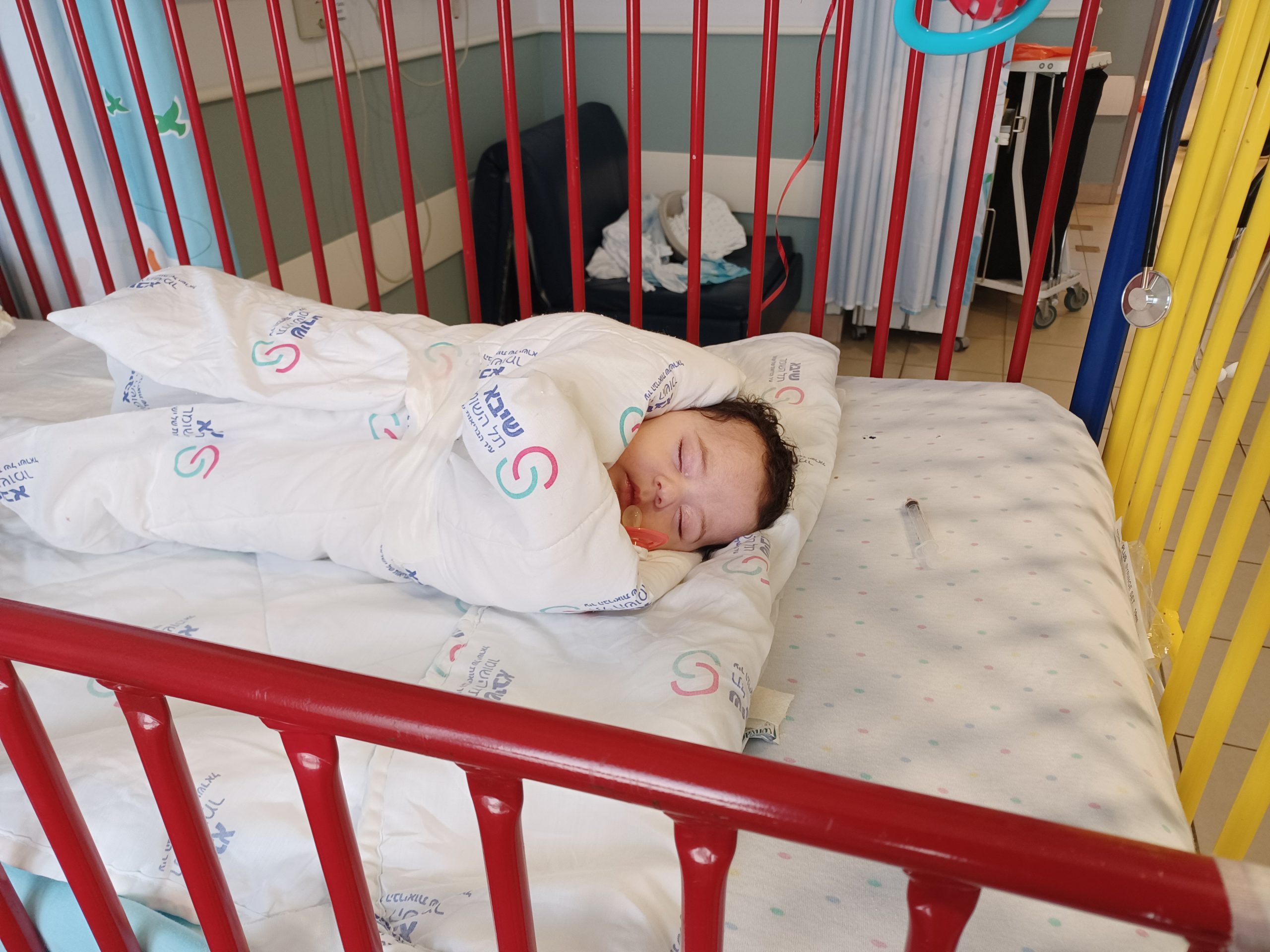 Today, when arriving to Sheba Hospital, I found Nadeen sound asleep and was able to visit with her mother a bit.
The angiography test that Nadeen was supposed to have this week, is not necessary anymore. She will have the surgery for her intestines, hopefully in two weeks.

Until that time, please keep praying for Nadeen and her mother, who is in the hospital for a long time now. 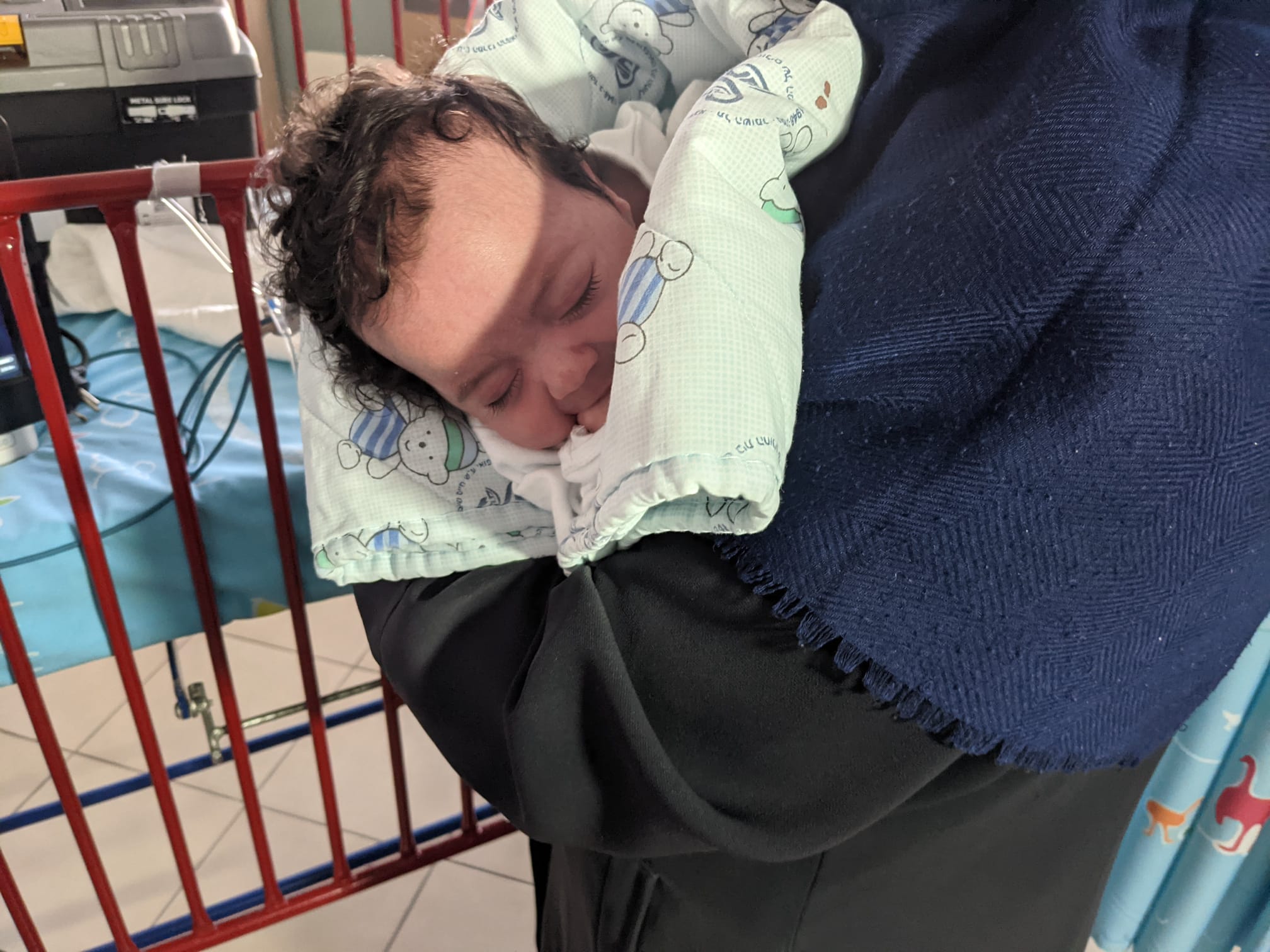 Nadeen had to do the angiography test today at Sheba hospital, but they couldn’t do it because her mom wasn’t present to sign for the papers. Therefore she will have the test done next Tuesday according to what the doctor has said. 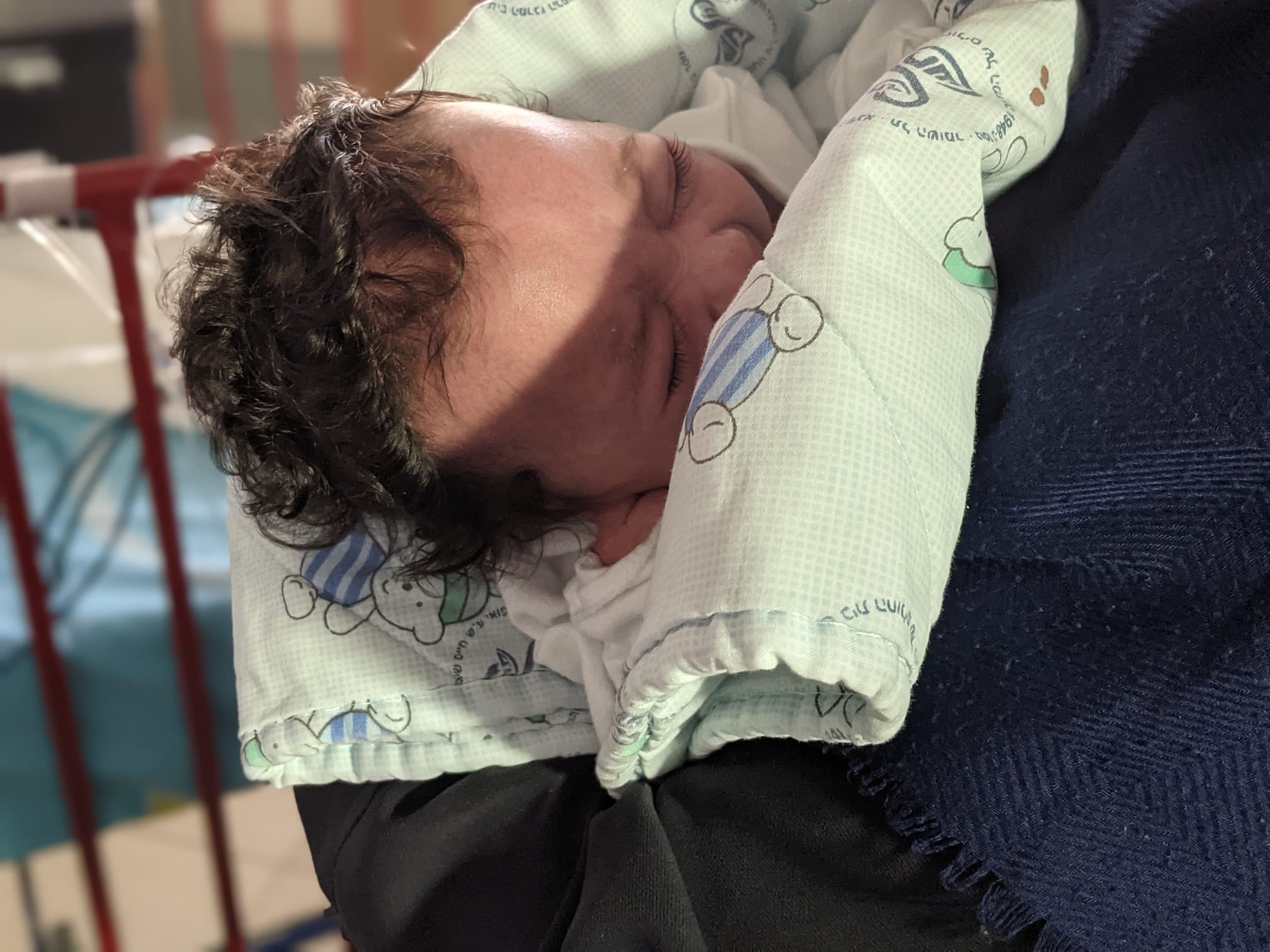 Please keep her mom in your prayers as she feels very tired and in need of renewed strength to be able to stand for Nadeen. 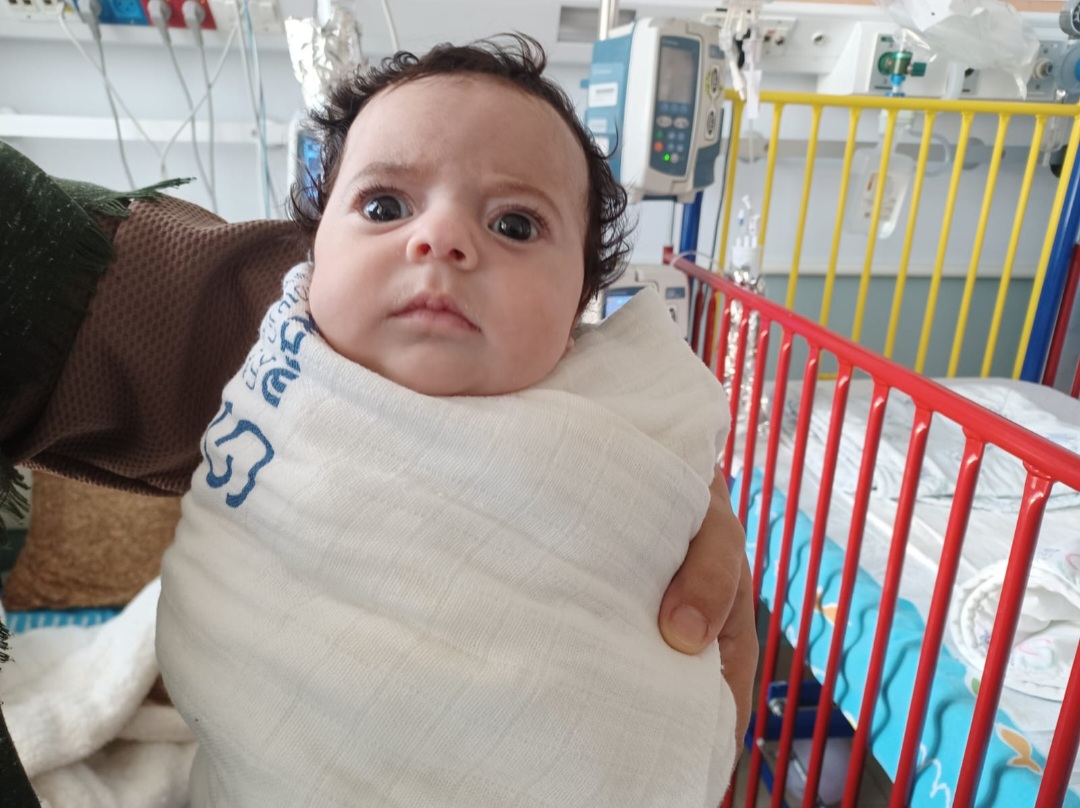 Nadeen’s doctor told us today that Nadeen will need to remain in Sheba hospital until they are able to operate on her intestines. It may be a few weeks until that time.

It’s so nice to see her doing well after all that she’s been through. Please keep little Nadeen in your prayers, that she would continue growing stronger. 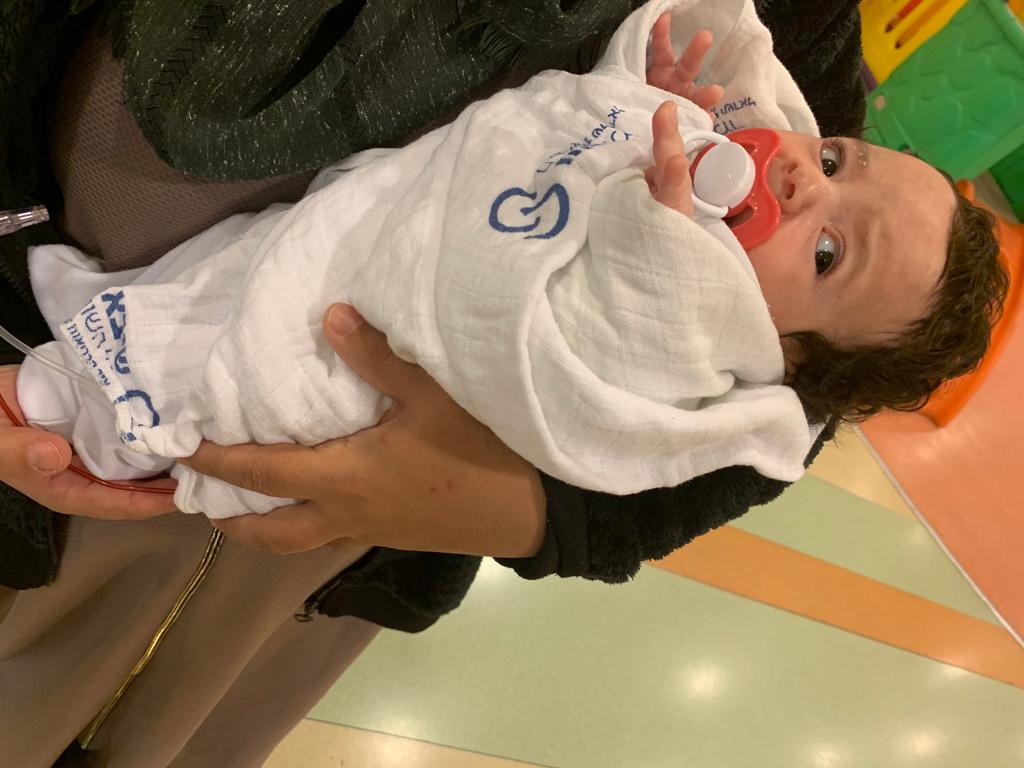 On the weekend, doctors at Sheba hospital removed the staples from the procedure done on Nadeen, but the surgeon made some new sutures, because it opened a bit after. The wound leaks a bit continuously the nurse told me.

Also her mother is very worried and cries a lot, although the condition of Nadeen is good.

Please pray for Nadeen’s mother, that she has enough patience and strength for the time in the hospital. 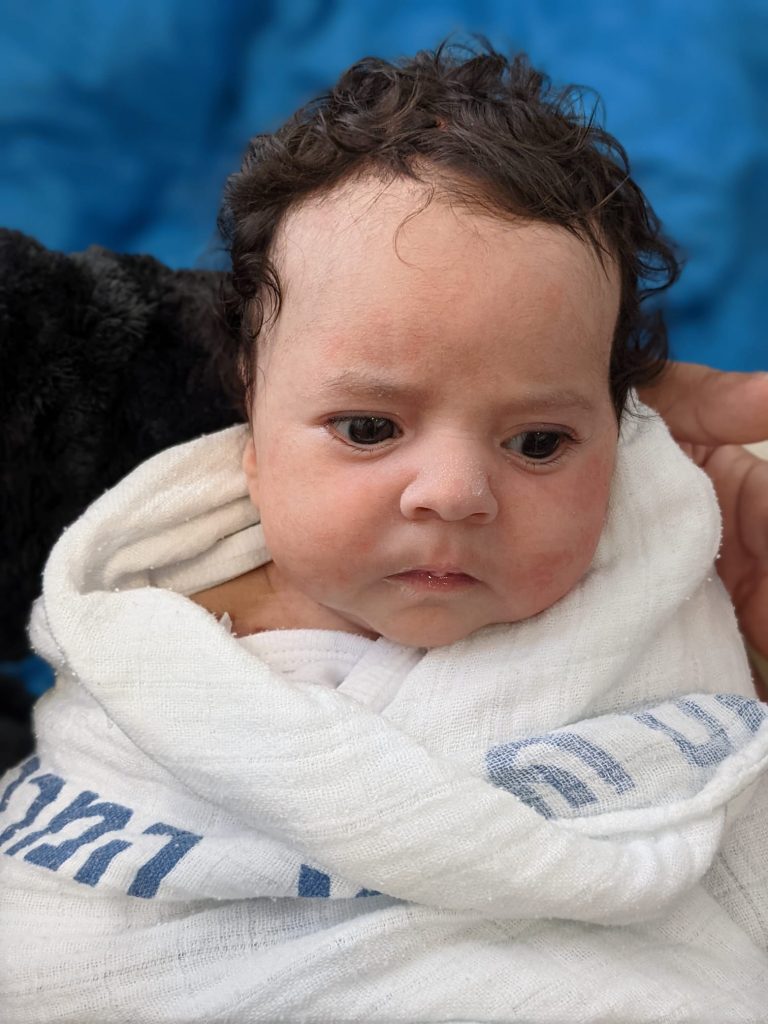 Last night, Nadeen was moved to a pediatric ward in Sheba Hospital.

The doctor in the ICU said that she was transferred there since she was doing so well and no longer needed an intensive care setting.

Nadeen’s mother seemed very much at peace when I visited her this morning, and it was really nice to see her holding Nadeen. She showed me the surgery site of the ileostomy and where the surgeons had removed the gangrene in her intestine; hopefully she said, doctors will remove the staples in her stomach over the weekend.
It was wonderful to see this beautiful girl looking so well.
Hide Comments Show Comments 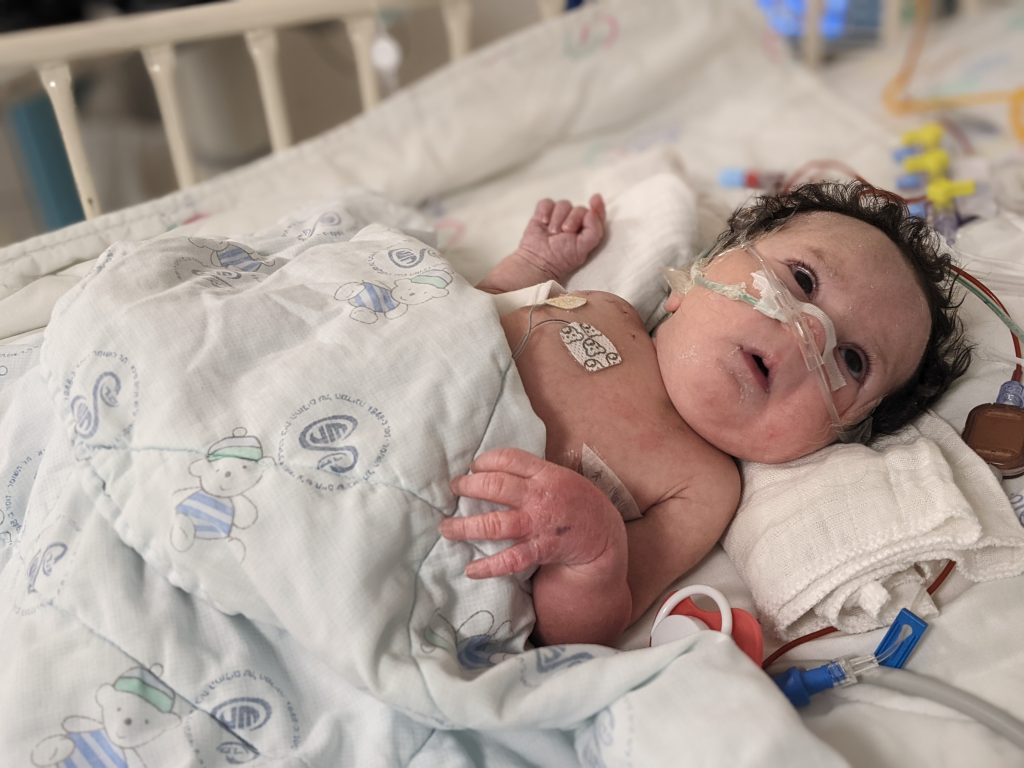 For several days, doctors at Sheba hospital have been working to discover the cause of some swelling in Nadeen’s stomach.
Finally over the weekend, Nadeen had an ileostomy to resolve the problem. During the procedure, the doctors also removed gangrene they found in her intestines. They are hopeful that this will resolve the fever and swelling.
Please continue to pray for little Nadeen’s recovery.
Hide Comments Show Comments 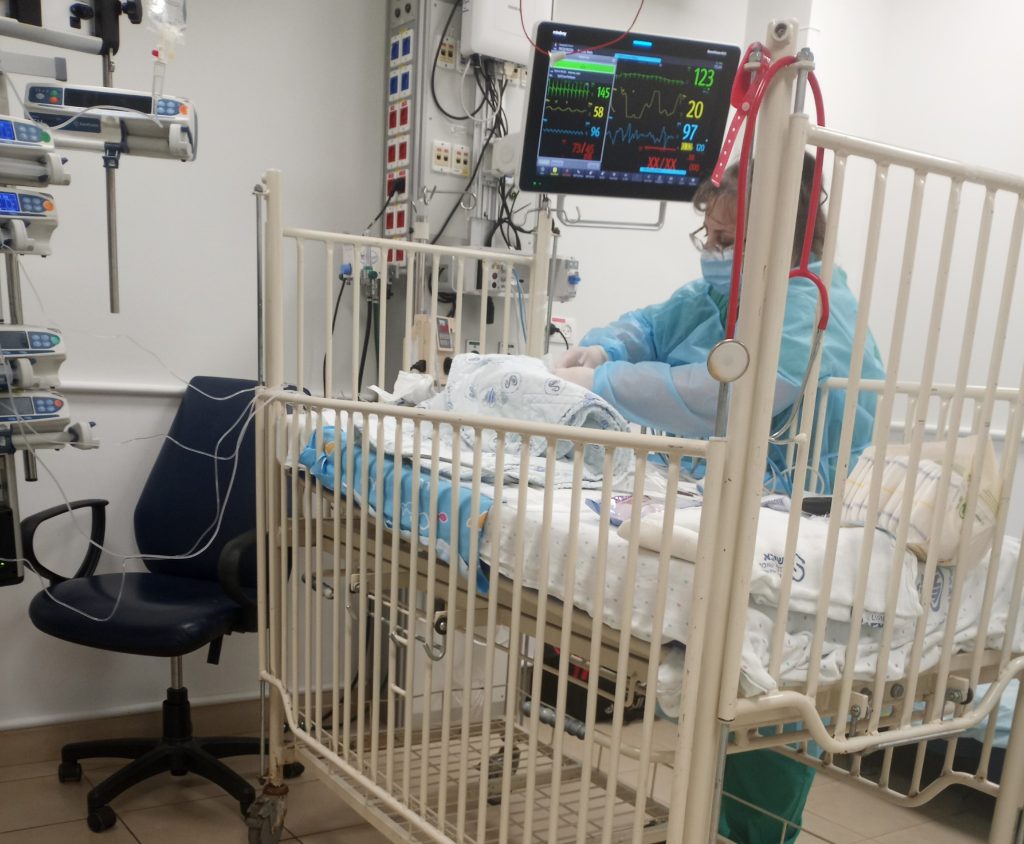 Today at Sheba hospital, Nadine had a small surgery for a pic line insertion to start her on antibiotics for a possible infection in her stomach.
It is not yet clear exactly the cause of the stomach swelling, so please be praying for wisdom and clarity about this. Please also be praying for her mother who is by her side. The doctors don’t know for sure how long she will be on antibiotics, but we are hoping and praying that the treatment will be effective.
Hide Comments Show Comments 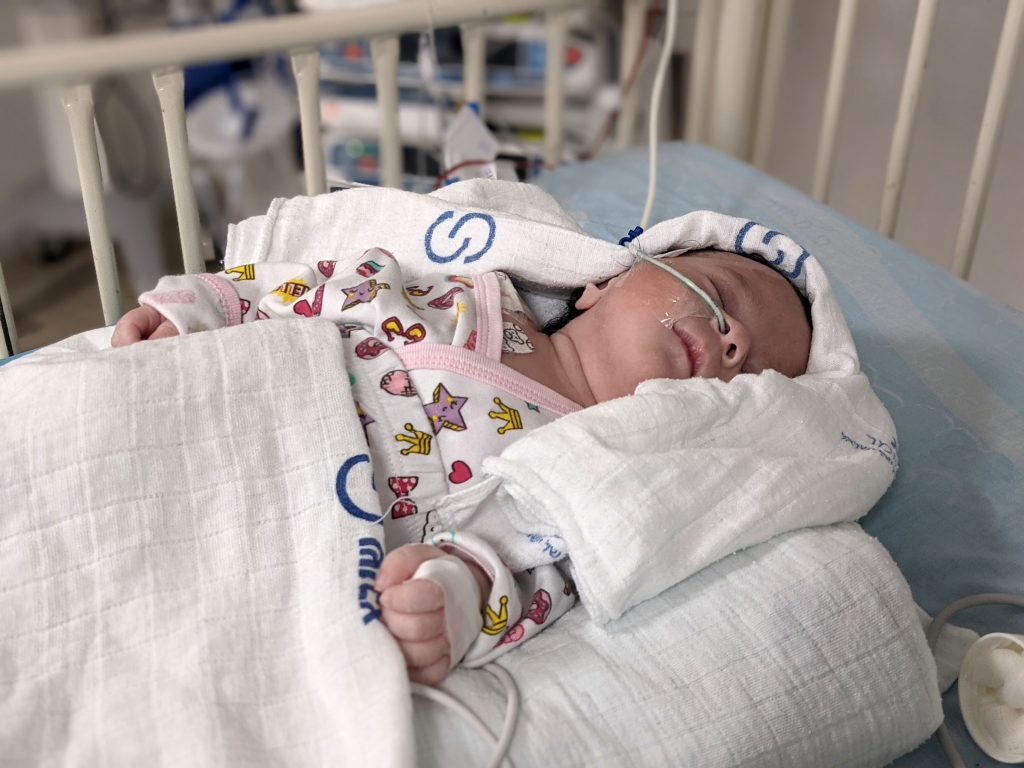 Nadeen is once again extubated and breathing well without oxygen support! She has struggled a bit with a fever lately. The doctors are not sure of the cause but they suspect the problem may be some congestion in her abdomen.

Thankfully, the congestion has improved quite a bit since last week, and the doctors hope it will continue to clear. In the meantime, they are working to decrease the amount of milk she receives through her NG tube, shifting instead to feeding her normally. 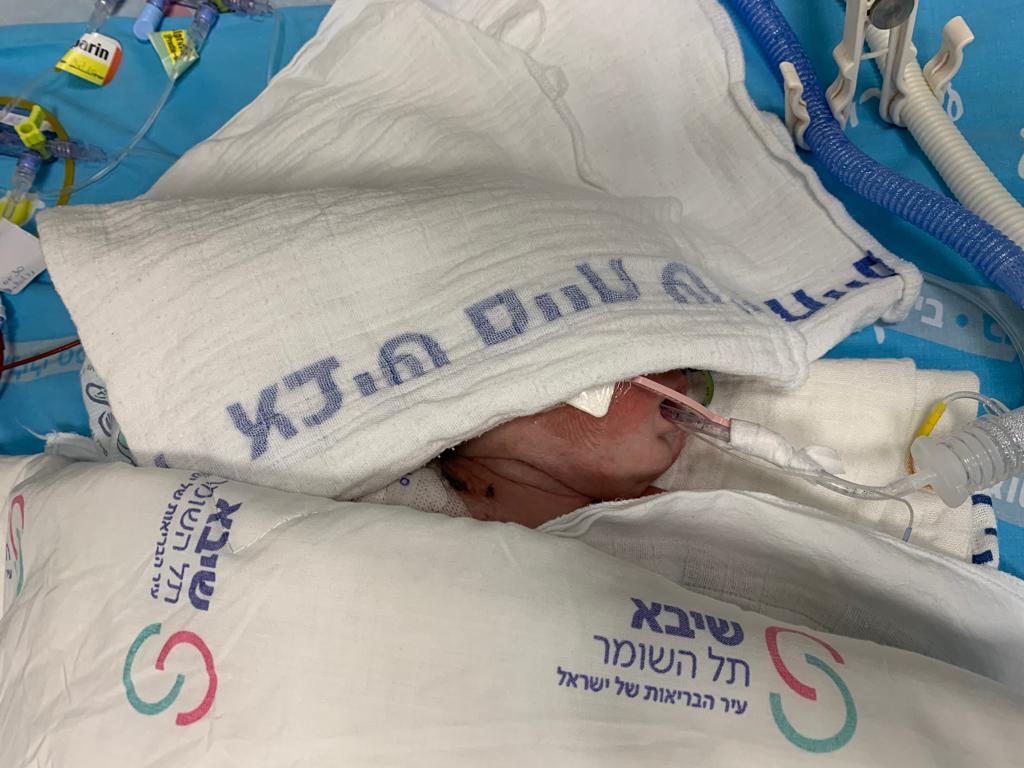 Nadeen is unfortunately intubated again after she was extubated three days ago. The reason is still unknown, but we hope to get more information soon. 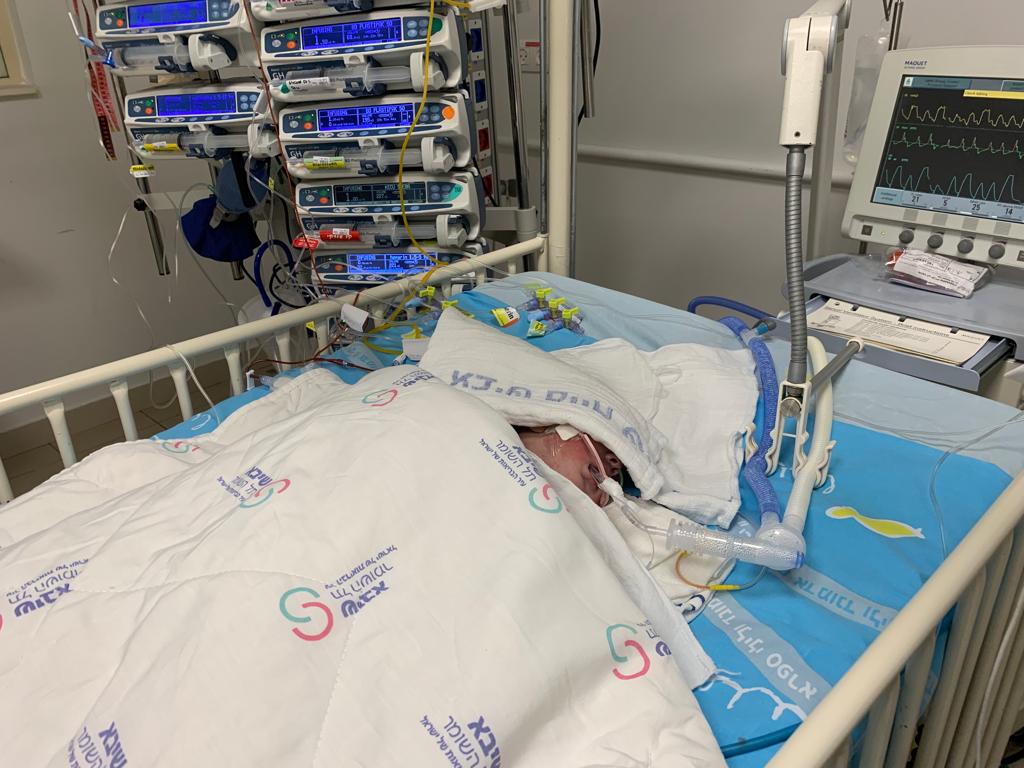 Nadeen is also not doing better or worse since the last time, so please pray that her situation will get better.
Hide Comments Show Comments 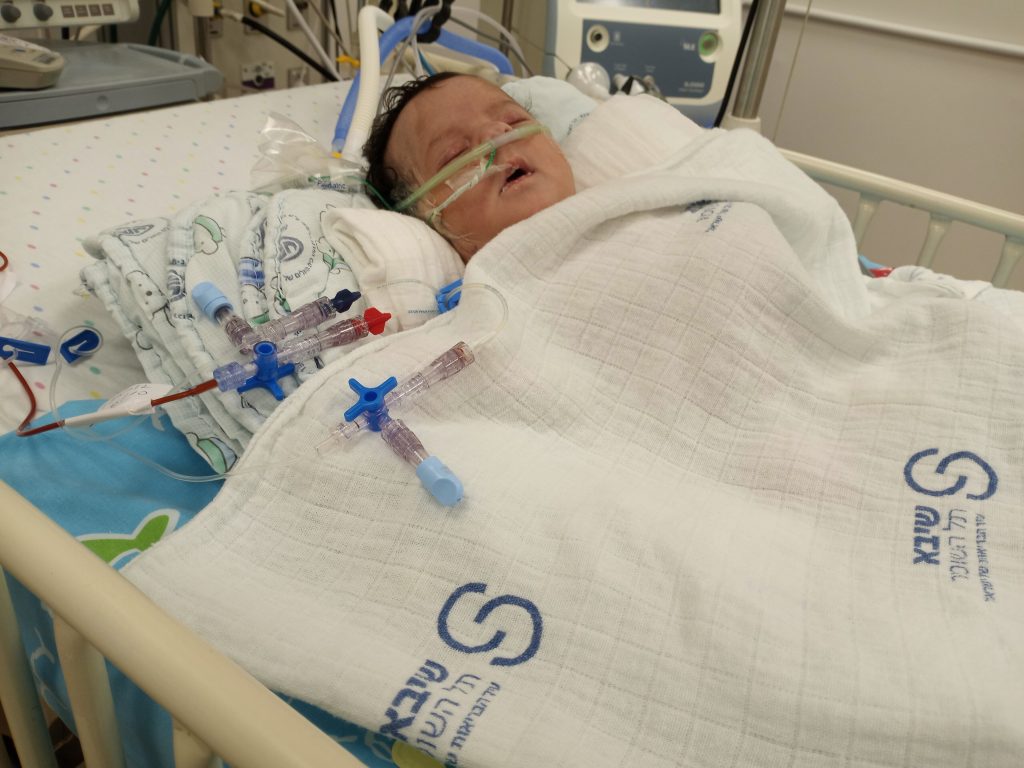 Since her catheterization at Sheba hospital, Nadine has been breathing with mechanical ventilation. Today however, thank God, she was successfully extubated.
Nadine may need further intervention during this time in the hospital if the dilation of the cath is not enough to help her condition.
Please be praying for her life and future; we are praying to the God who sees all of her days, may he bring all that is good to this little one.
Hide Comments Show Comments 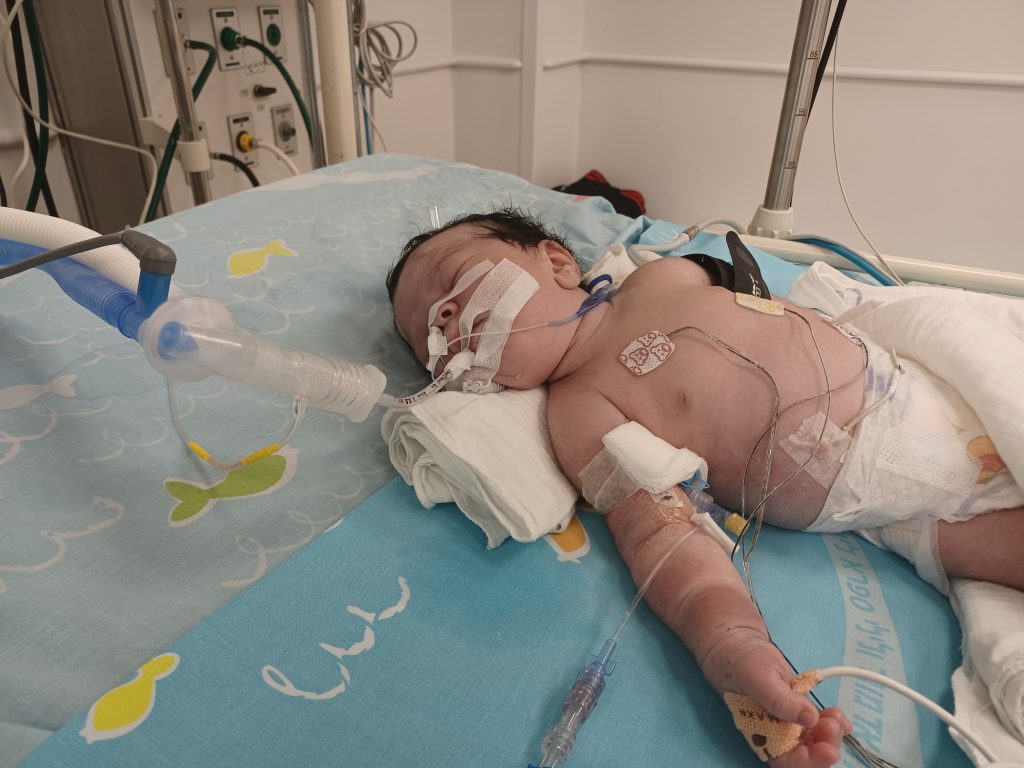 Nadeen had her catheterization today at Sheba hospital to assess the condition of her heart. It went well. She had Pulmonary Atresia so they were able to dilate the pulmonary valve. They need to do more procedures to see how things in her heart develop. But this is a good first step. Nadeen’s mother was relieved. She was really patient and kind during the surgery.
Please pray for Nadeen for the rest of the many follow-up appointments.
‘I have said these things to you, that in me you may have peace. In the world you will have tribulation. But take heart; I have overcome the world.’
John 16:33
Hide Comments Show Comments 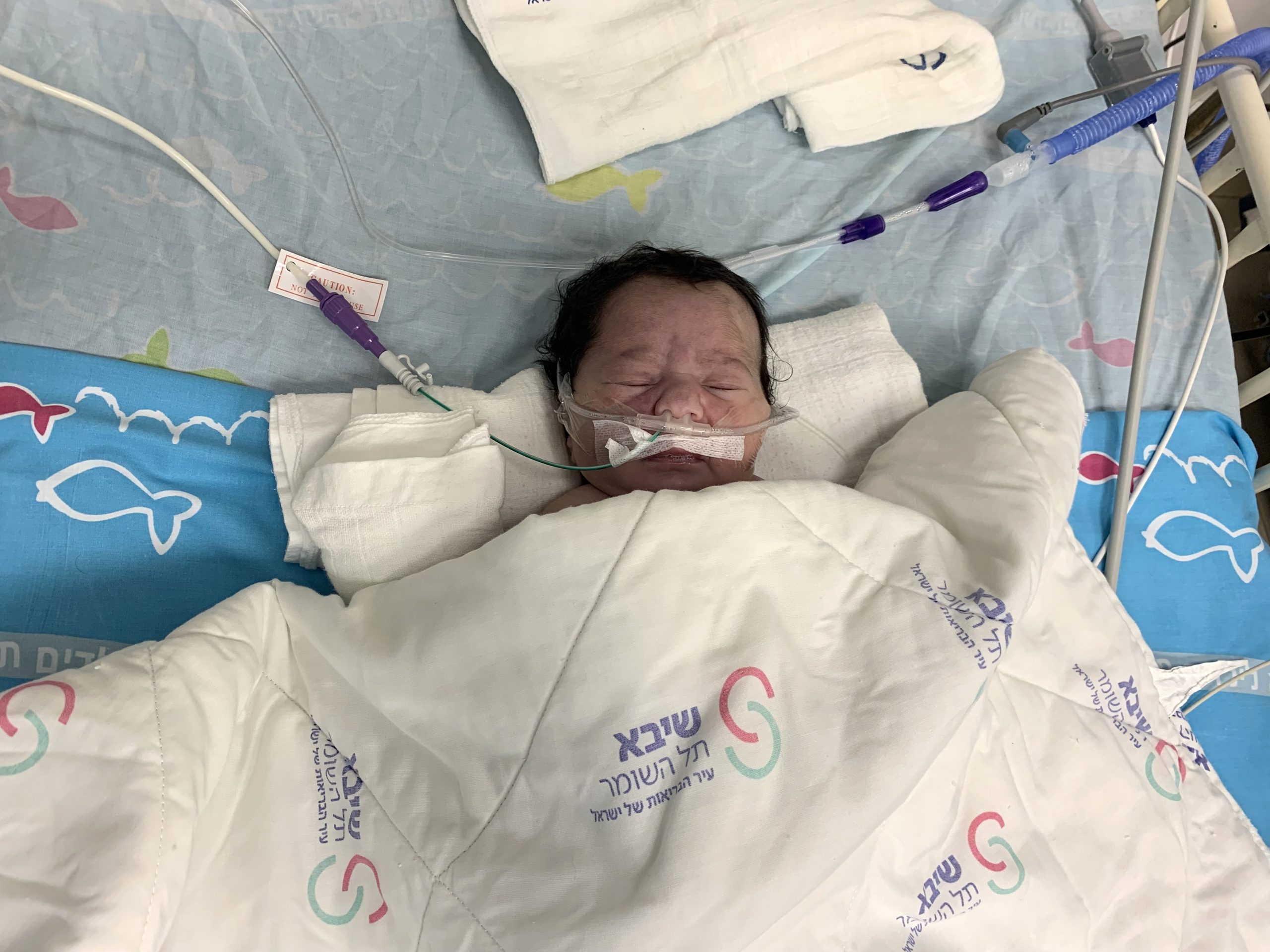 The very young girl Nadeen is in the ICU with her mom now. The next steps are unknown yet, because she just arrived. So the doctors need some time to do some tests and examinations before they can give us more information. Please pray for wisdom for the decision the doctors will make concerning this precious new life. 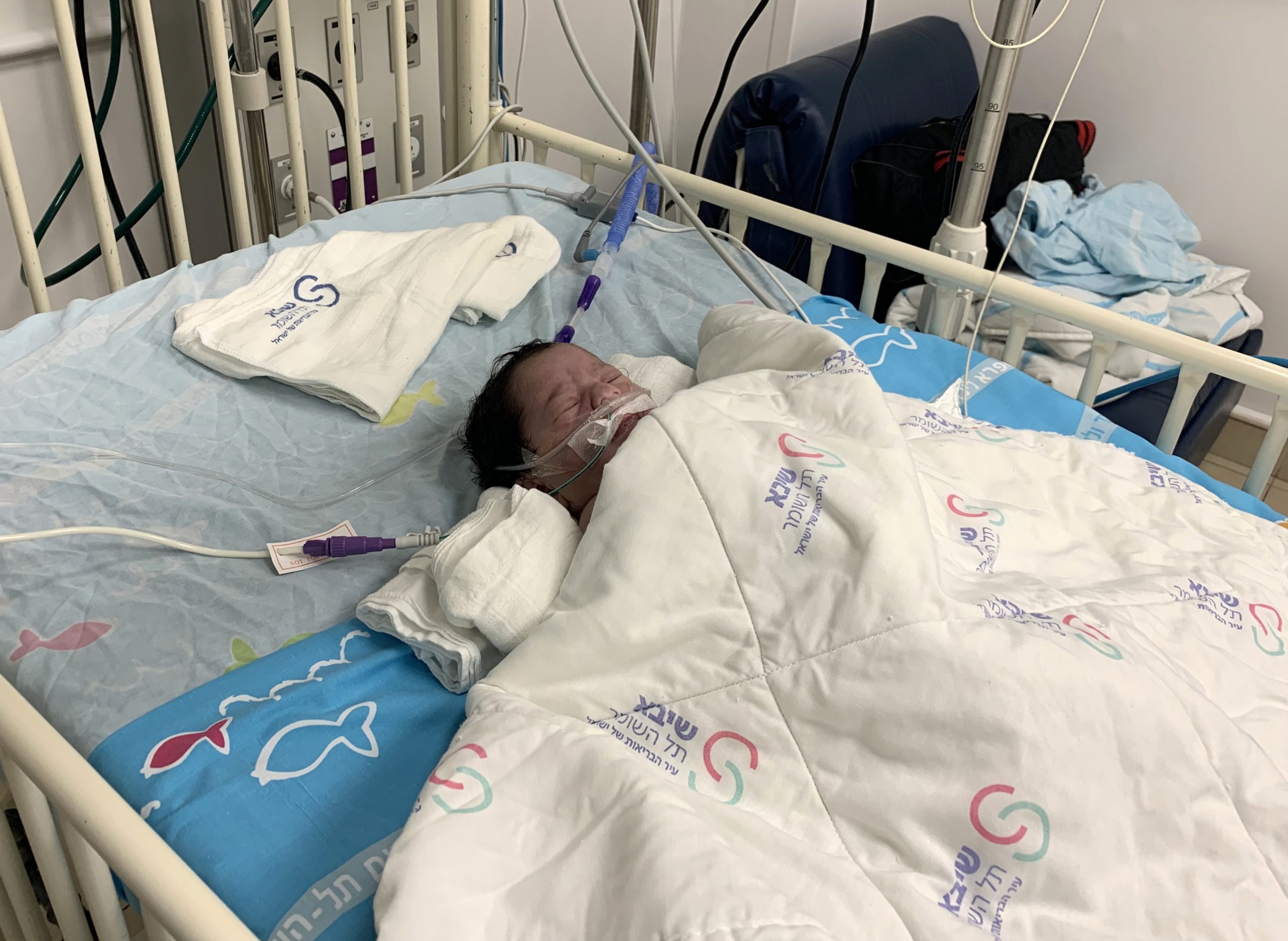 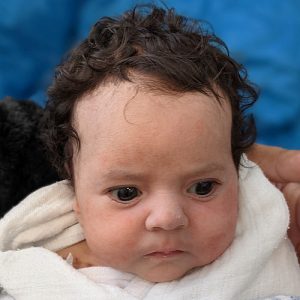 Nadeen is a week old child from the Gaza Strip diagnosed with pulmonic stenosis.

Nadeen does not yet have a local leader to advocate for prayer and financial support for her surgery.

As of right now, Nadeen still needs $10730 toward surgery and related expenses.