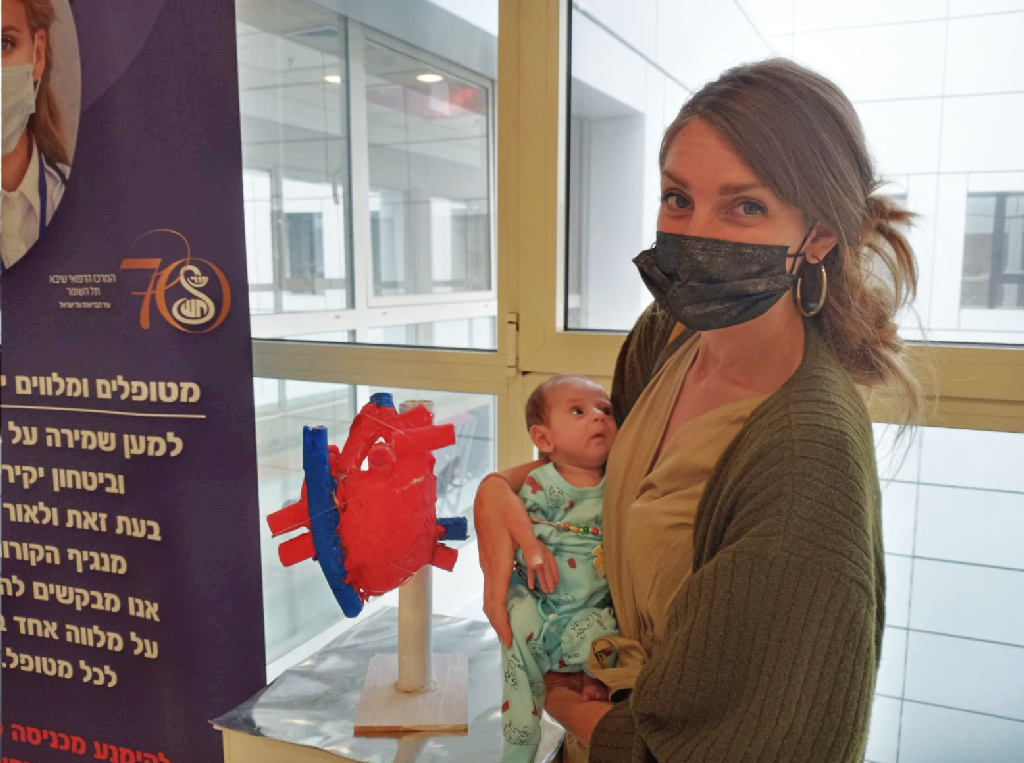 We are excited and happy to bring little Yousif back to our home in Jaffa this evening!
We are all very pleased that he is doing well after an emergency catheterization, a big heart surgery, and a diaphragm plication surgery too. It’s been a long road for him, and his mother has been by his side with patience each day.
He will return to Sheba hospital for an echo next week.
Hide Comments Show Comments 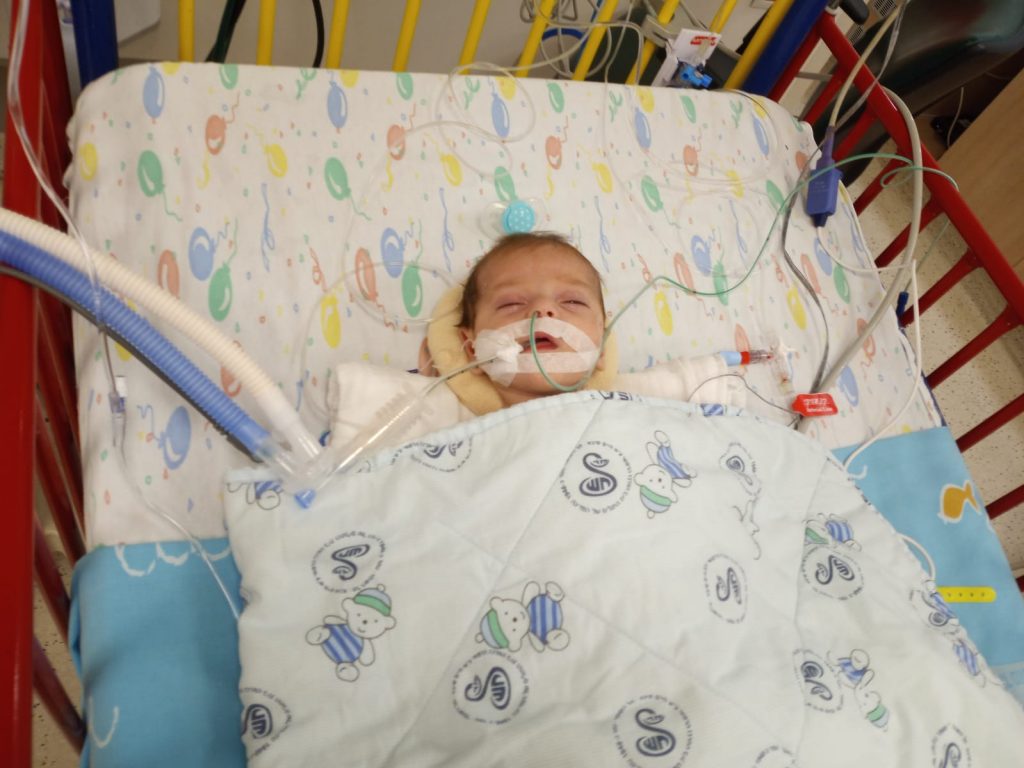 Little Yousif was fasting from the morning in preparation for his surgery today. The procedure took about two hours, and his mum was keen to see Yousif as soon as possible. The good news is that the surgery went well, and as he recovers, he should be in better condition than he was before. They are hopeful to extubate Yousif soon.
This surgery was a “small” and “easy” surgery, as his mother explained to me from what she understood from the surgeons. This in comparison to the big open-heart surgery which he had previously had, the surgery for his diaphragm is quite a different case. Still, we agreed together that in the hands of surgeons, it could be ‘easy.’ For me and Yousif’s mum, this would be completely impossible. Thankfully, Yousif is now in the hospital with access to highly skilled professionals who have experience and equipment necessary to do such procedures.
Thank you for your prayerful covering for this little one.
Hide Comments Show Comments 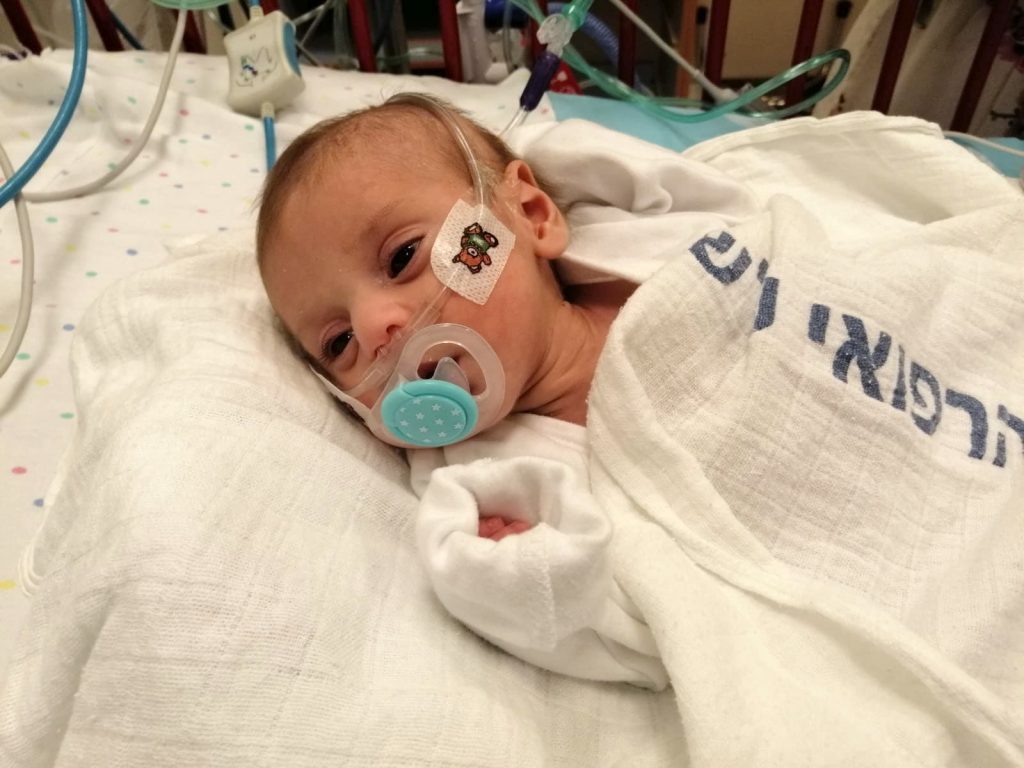 Our dear Yousif has been moved to the intermediate ward of the pediatric ICU at Sheba hospital which, although seemingly a small step, is indicative of his steady progress. This is his first time to be placed in another department since being admitted to the hospital via the emergency room a week and a half ago.
He remains on oxygen and his body does not do well without it. Please continue to pray for him and his devoted, intelligent, and brave mother.
Hide Comments Show Comments 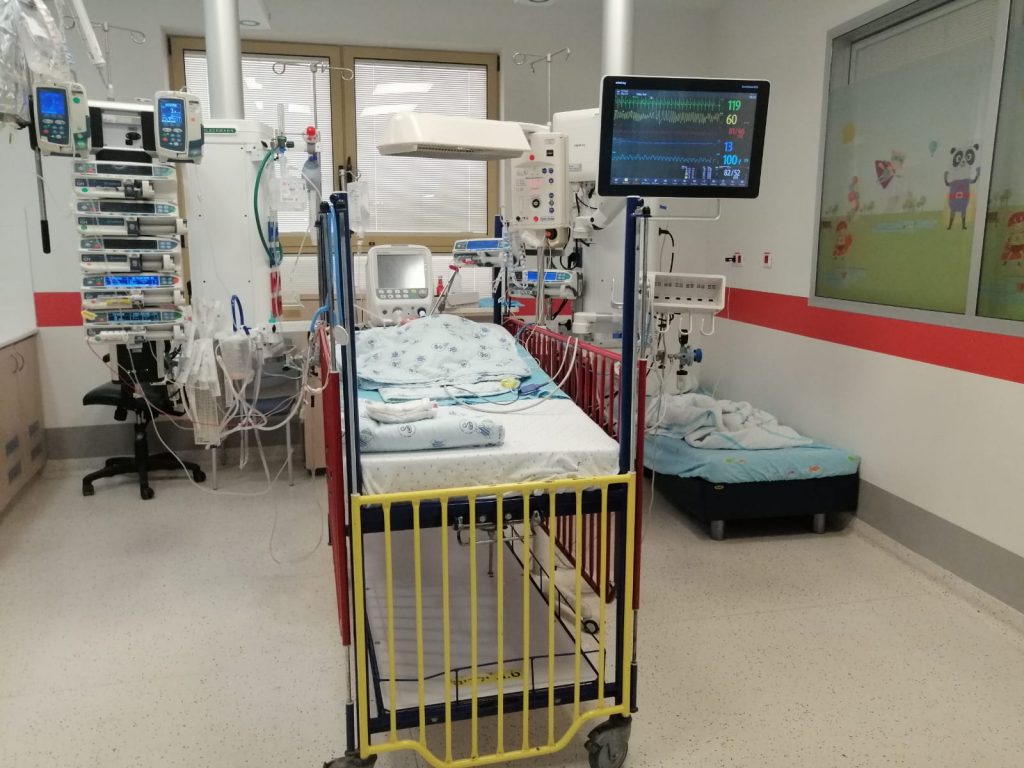 The lovely mother of Yousif was in a very good mood today, encouraging one of our other moms who is also in Sheba hospital at the moment.

Yousif’s mother is in a good mood because her tiny son is extubated! This shows that he continues to recover very well from his surgery.Praise the Lord for this.

Thank you for your prayers that are still appreciated. May Yousif continue in his good recovery. 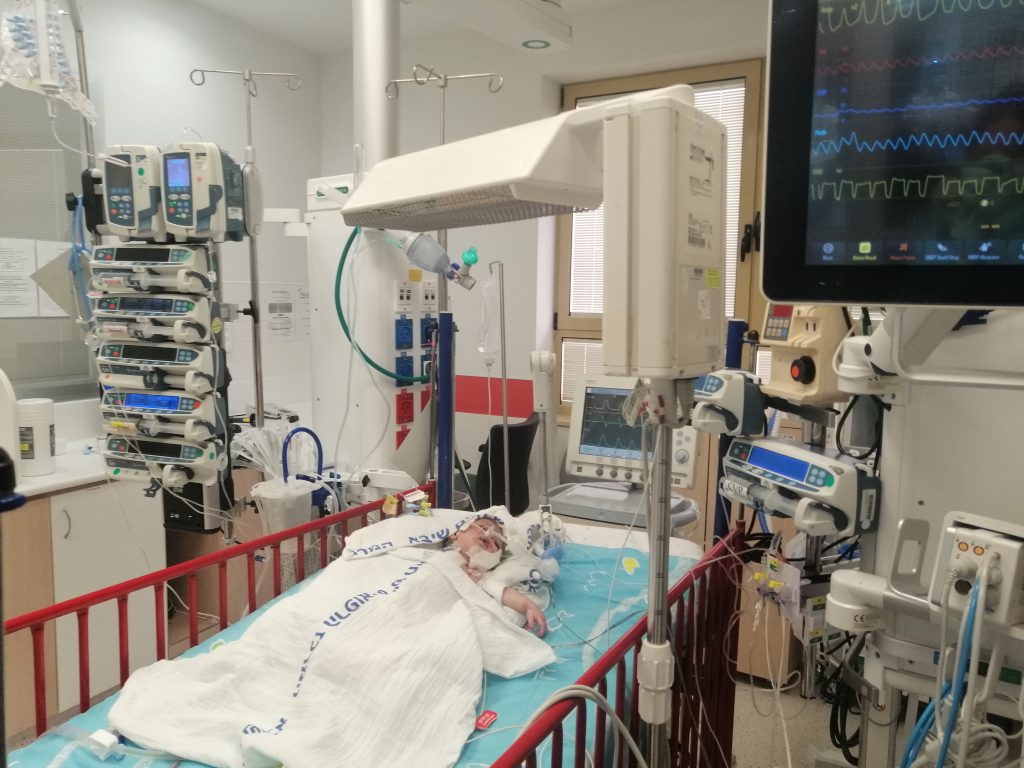 Little Yousif is still intubated in the ICU after his big surgery yesterday. The mother has been told that he is doing well though, and has had a good 24 hours since the surgery. 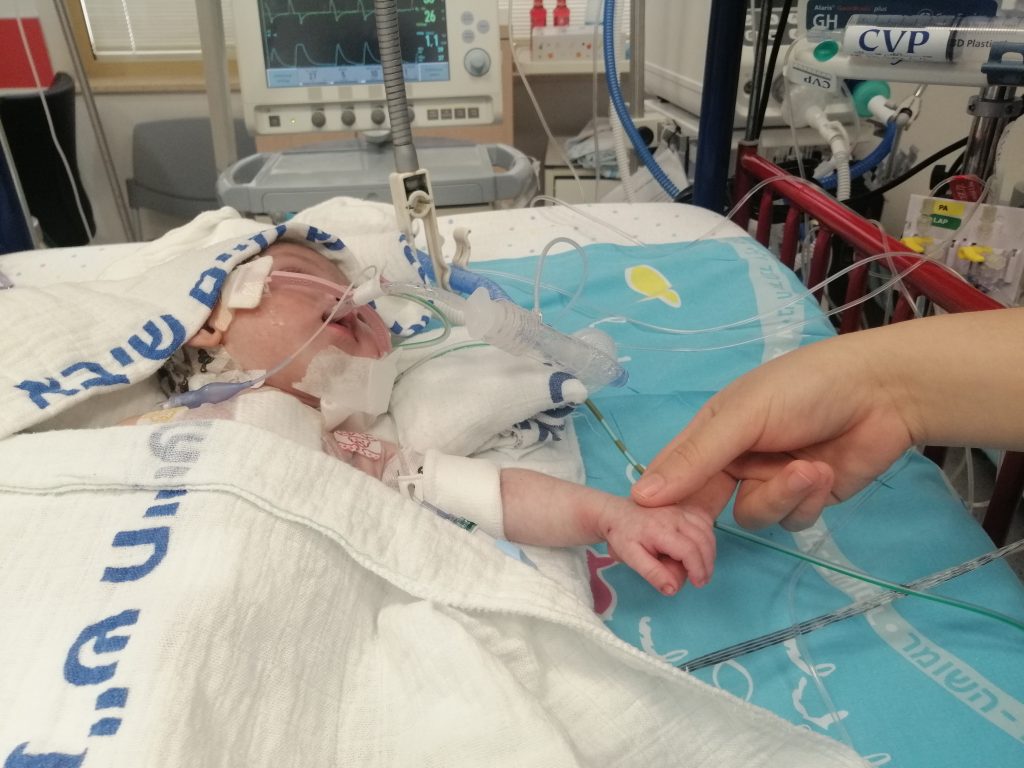 We noticed that his skin looks incredibly pink, in comparison to the greyish tinge before the surgery. His hand is the same colour as his mum’s now, it was sweet to see her holding his tiny hand in hers.
Thank God for this recovery so far.
Hide Comments Show Comments 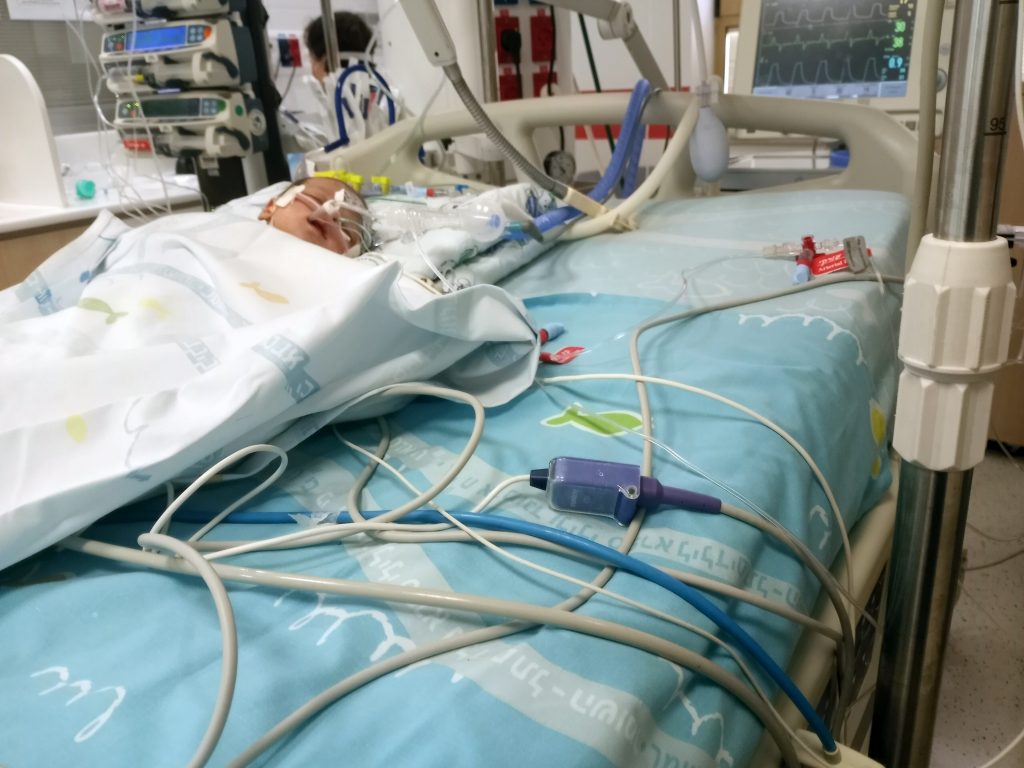 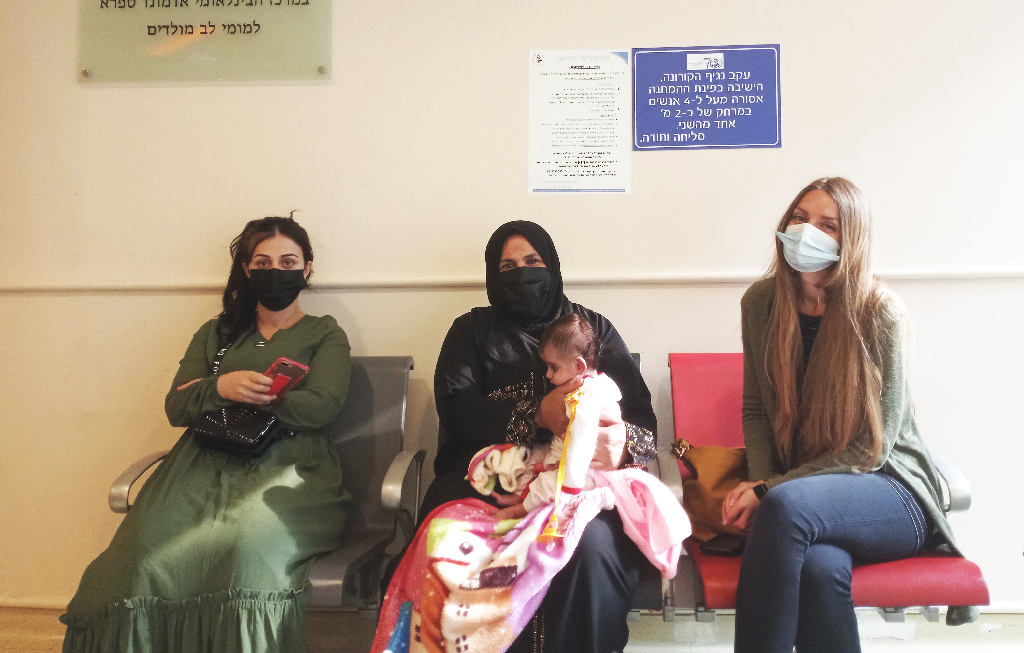 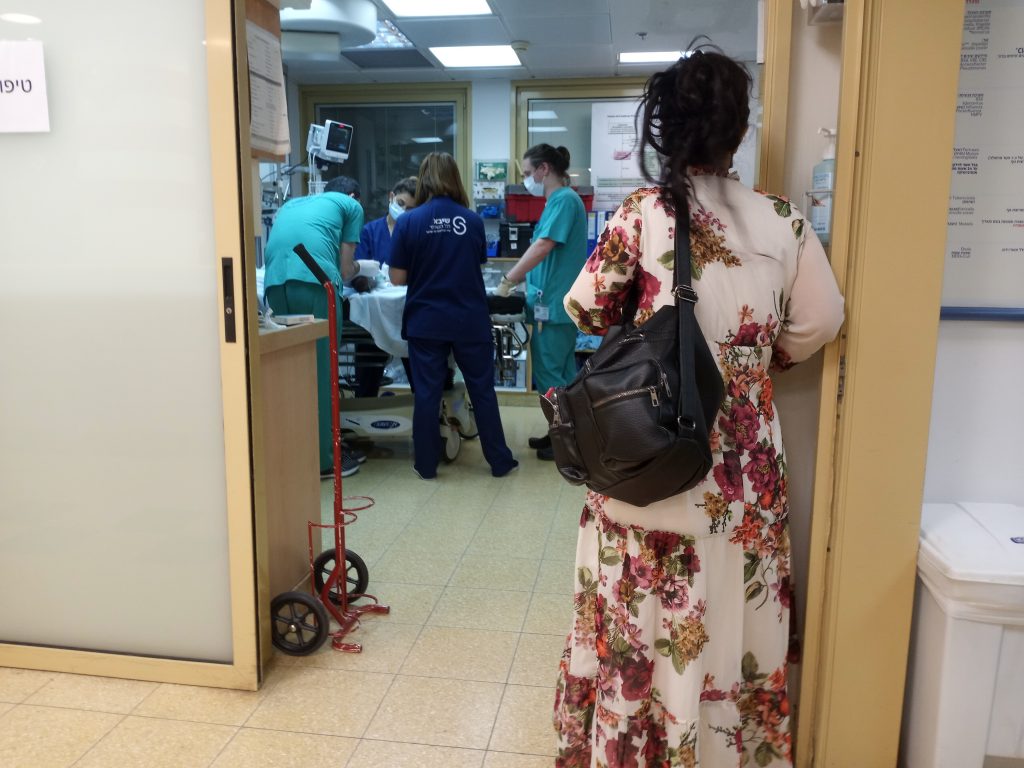 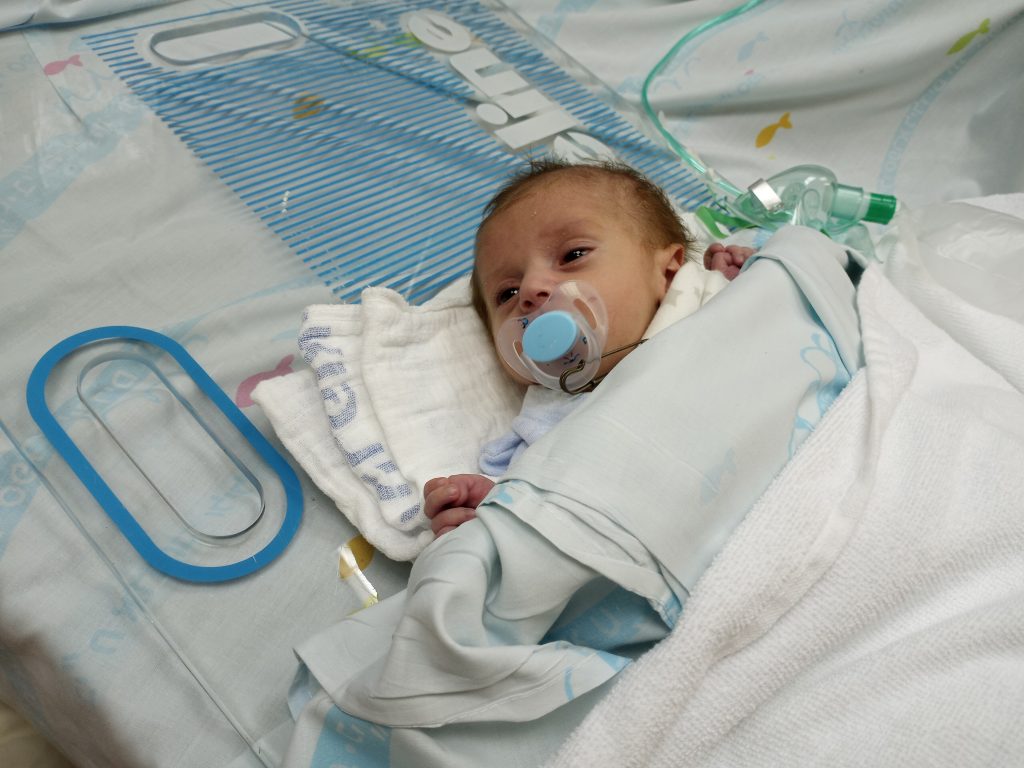 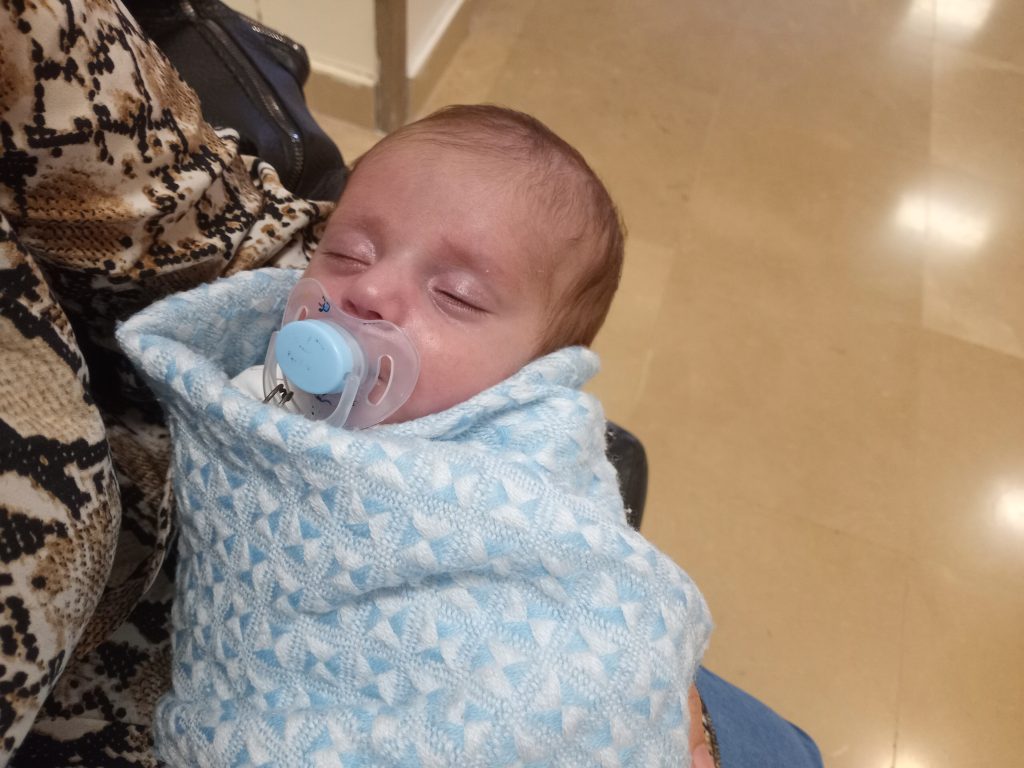 Yousif came to Sheba hospital today for a CT scan of his heart and a corona test in preparation for his operation, scheduled for Sunday. Obviously, everyone loves this beautiful boy and are taken aback by his small size. It was six hours of fasting before the procedure today which is a really long time for a baby who eats every two hours; it’s like missing three meals. Once the CT angio was done, he was able to take his bottle as usual and enjoyed eating and sleeping normally. 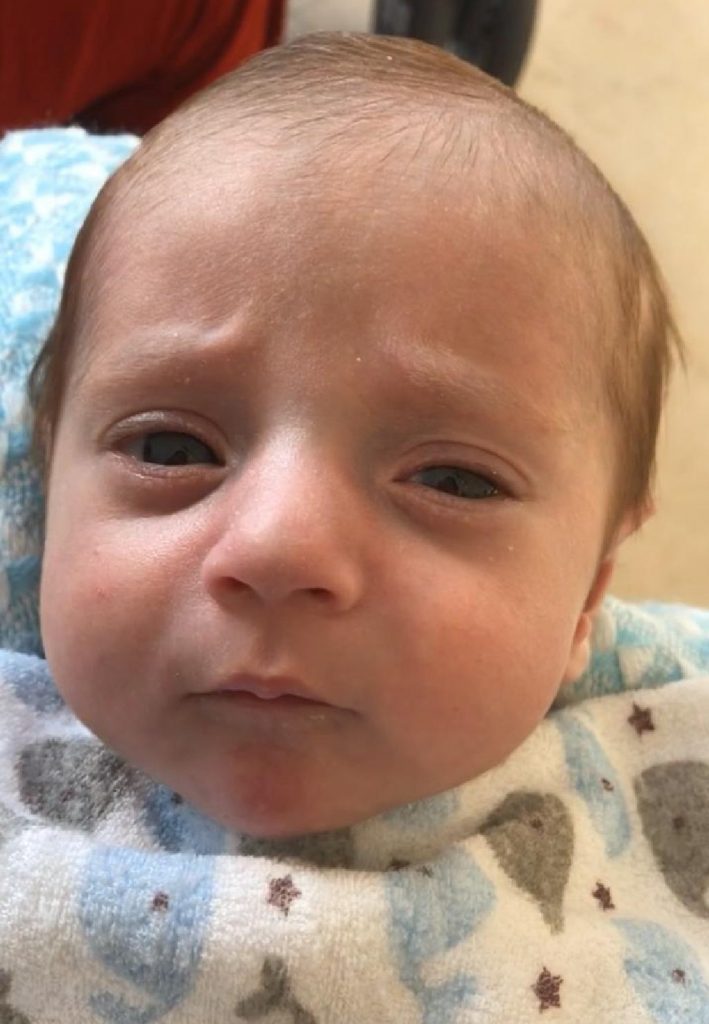 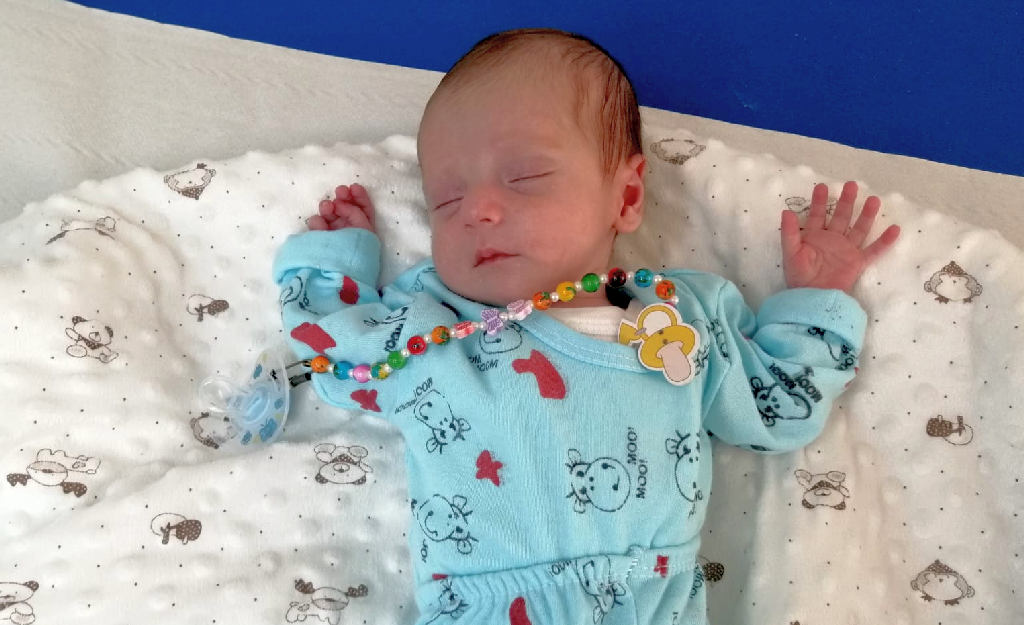 Yousif had his first appointment at Sheba hospital today. He had an echo that lasted for about an hour as the cardiologist and technician worked to thoroughly capture the structure of his heart. His mum was amazing. This is her first baby and he is only one and a half months old. She calmed him and got him to sleep. The doctor confirmed he needs the arterial switch surgery, which was the recommendation in Kurdistan. 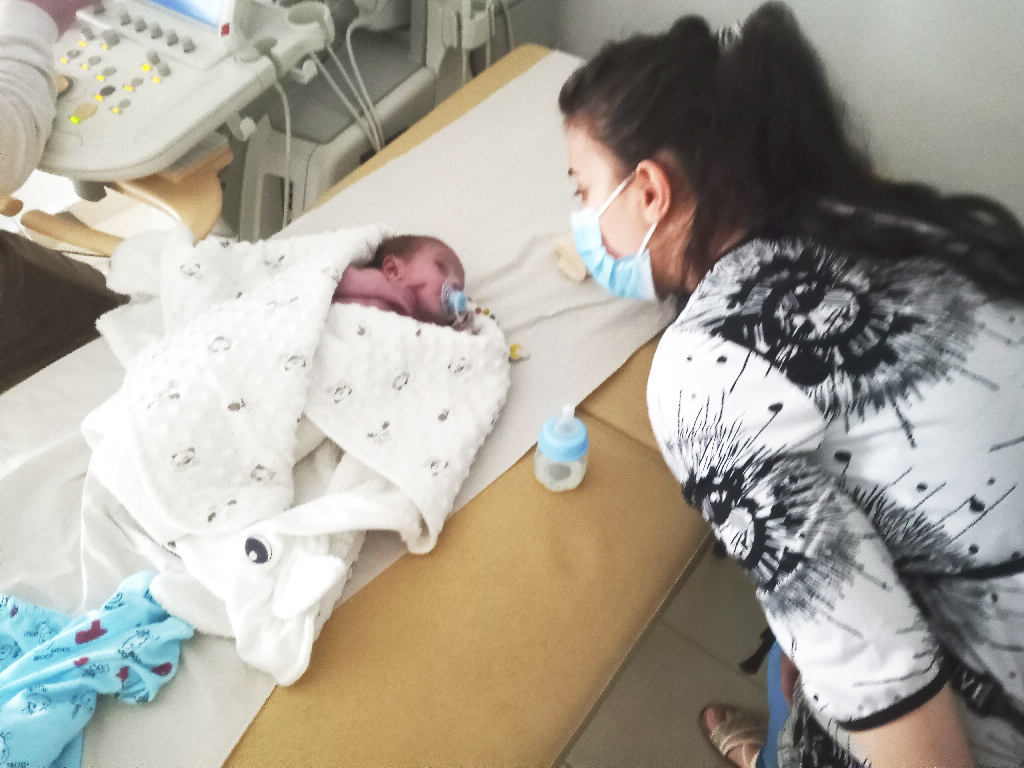 First appointment days for our Kurdish children are often very long, usually involving an echo, a blood test, and an X-ray. Today I thought about Yousif’s mother, and how she is managing to be taking in this entirely new country and hospital system, that this must be requiring tremendous trust and courage for her to adjust to everything as swiftly as it is coming and I witnessed that trust and courage in her at her son’s first appointment today. Thank you for your prayers for this family.
Hide Comments Show Comments 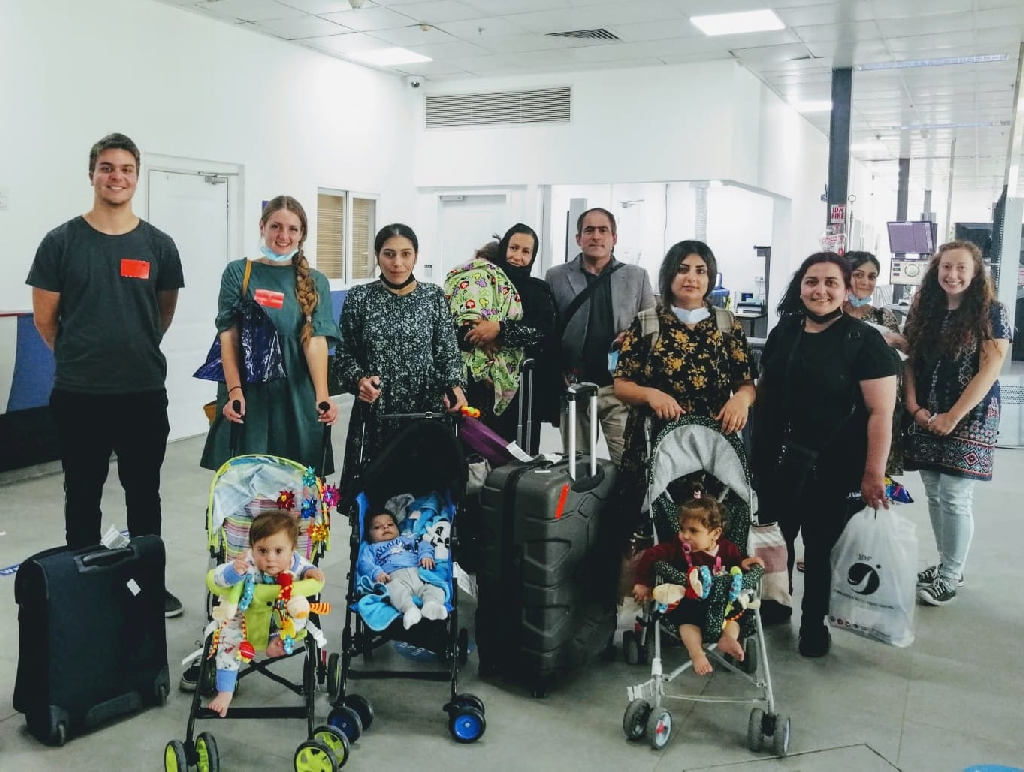 Today Yousif and his mother arrived with four other families at the Jordan river crossing after coming by plane to Jordan from Kurdistan, When I arrived at the crossing point, the families had already passed the control and also my co-workers Georgia and Alena were already there, so I quickly joined the group picture at the last second.

Then we went outside to the Shevet vans, parked at the crossing, and waiting for us. Thank God there was enough space for all the bags and all the families, so we made our way back. On our last trip from the Jordan border, there was a situation in which the Lord answered my prayer, and showed me that he knows what we need. Today the exact same thing happened, and it was such a beautiful reminder of his faithfulness for me. 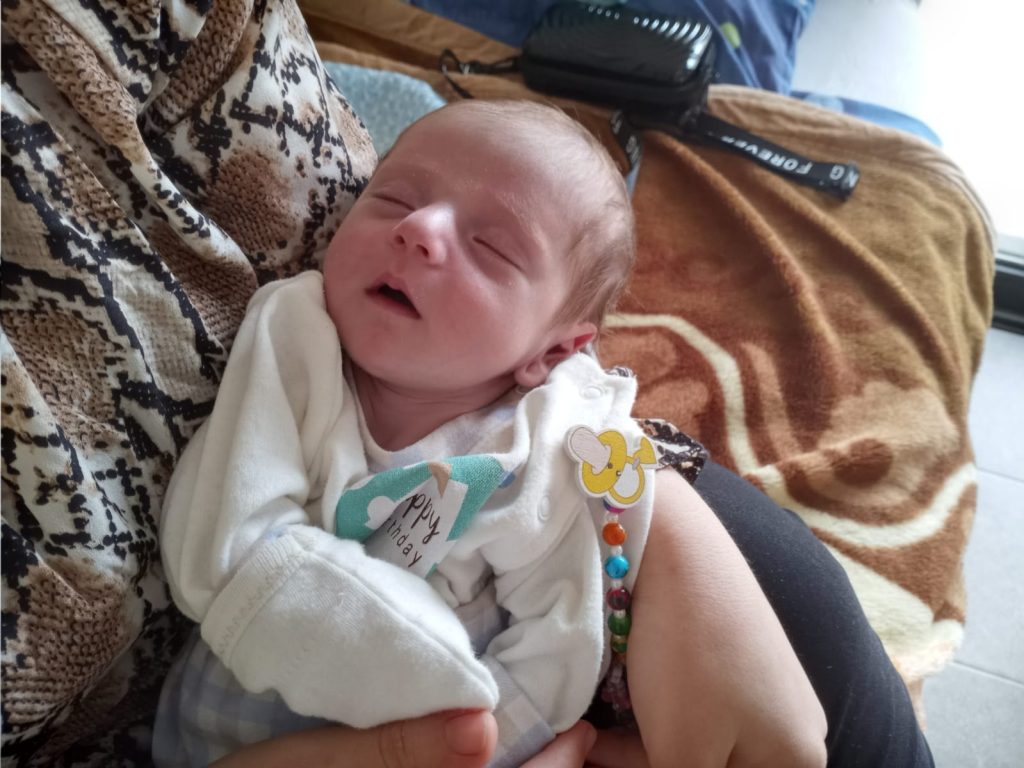 I hope that his faithfulness encourages us to also be faithful to him. Would you join us in prayer for newborn Yousif? He will have his first appointment in Sheba hospital tomorrow. 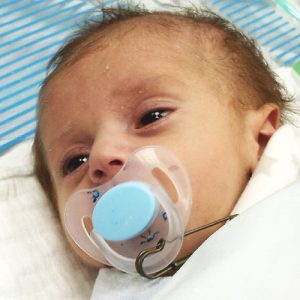 Yousif is a month old child from Kurdistan, northern Iraq diagnosed with transposition of the great arteries.

Malibu Pacific Church is the local leader to advocate for prayer and financial support for his surgery.

As of right now, Yousif still needs $6000 toward surgery and related expenses.