Our morning meeting was half its normal size today, as our crews were already out shepherding two young boys, Ahmed and Wael, from the Gaza crossing to both Sheba and Hadassah hospitals in Israel: 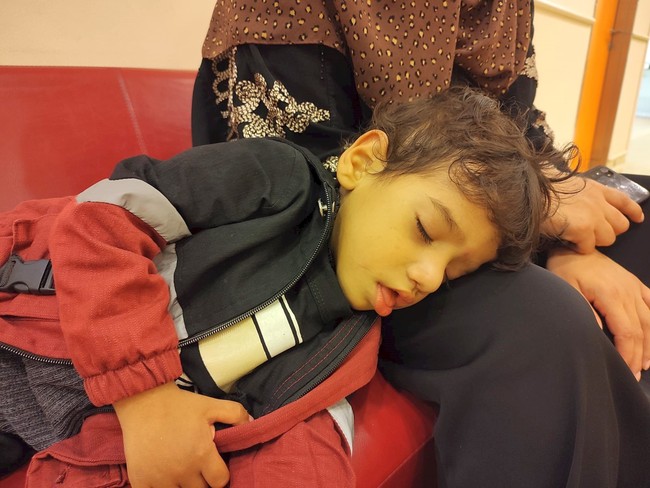 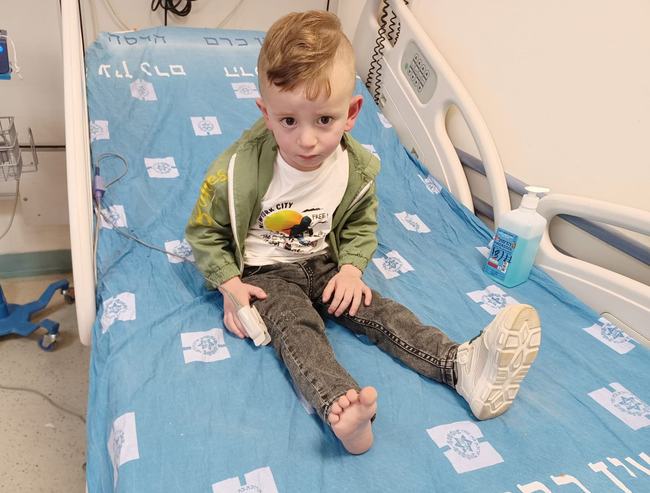 18-year-old Amelie was among those who remained behind at our base in Ashdod, and she offered somber prayer for two Gaza newborns, Adam and Somaia, both between life and death in the ICU in Israel. From Amelie’s blog after visiting Somaia later today we can understand something of the burden our young coworkers are taking on:

Today, I visited little Somaia and her grandmother. When I stand next to Somaia I was really shocked. She didn’t look good or really alive. The doctor said that she is so sick, but also they can’t wean her off ventilation. Soon they will do a cath for her to find out what could be the reason. 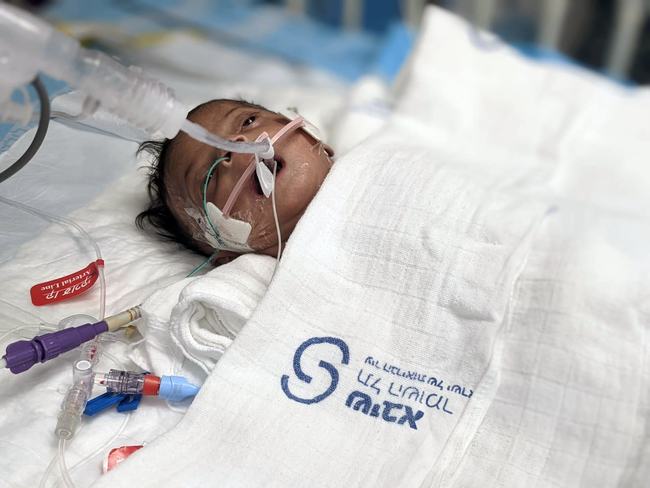 I was standing a while at the bed of Somaia to talk to her and to promise her that there are people who love her and that God loves her so much. This girl doesn’t need only better health but also love! Somaia is in God’s loving hands and we can trust him that he will make it good however.

Please pray for Somaia, her family and grandmother and her doctors. They all need strength, wisdom and love.

Early this evening another critically-ill Gaza child, just turned seven-year-old Yassin, was rushed to Sheba in a last-ditch attempt to keep his heart from failing. Even though doctors there think it unlikely they will succeed, both they and our team are willing to endure the pain of loving and possibly losing this sweet boy: 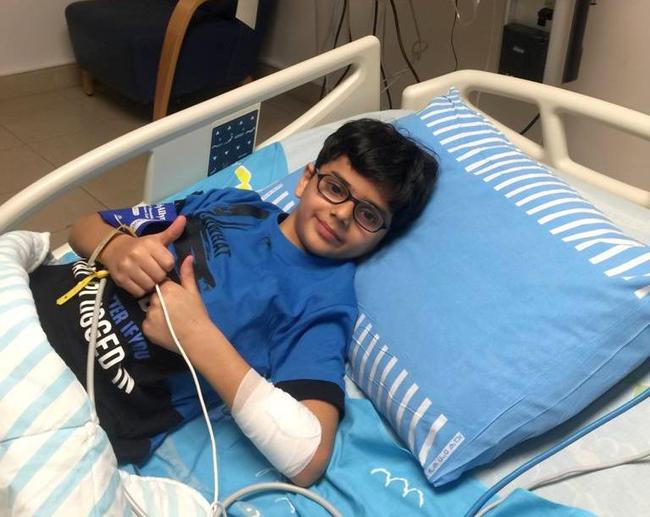 And even as I write late in the evening, Amelie and Hanna have just driven through the dark Judean hills to return Wael to the Hadassah emergency room, after an episode of vomiting and high fever following his bronchoscopy today. They’ll probably be there into the wee hours of the morning.

I told a visitor this week that our young coworkers would never come if they knew what they were getting into! But they will also learn and grow into things they never would have imagined, as they are entrusted with life-and-death responsibilities that no one else is there to take on.

And I told our little team this morning that whether the children live or die, they’ve already won the victory just by standing by the side of these families as they fight the greatest battle of their lives. Love is eternal and the families will never forget that God and his people cared for them.

But where can we find such young people, who believe there is a reason good enough and true enough in this world to take on these challenges at the cost of their own suffering? After all, they were born into a “postmodern” generation in which many–even among believers–doubt that objective truth even exists:

Recently, a colleague noted how a growing number of conservative-minded people he encountered on social media, some of them Christians, were refusing to believe stories about Russian atrocities in Ukraine. Some even rejected that the invasion was an unjustified war of aggression by Russia. When he asked the reason for their doubt, their response was simply because the stories were reported in the “mainstream media,” which has done nothing but lie to us for years.

I share suspicion for certain sources…However, when our suspicion about truth-telling becomes suspicion of truth itself, we’ve become postmodernists. Christian writer Samuel James calls this bad habit “negative epistemology.” This is the idea that we don’t need to figure out what’s true, we only need to believe the opposite of whatever our political enemies say.

Of course, this is only part of the overall and pervasive collapse of trust throughout American society, specifically trust in institutions…beneath all of these specific examples is a cultural landscape that treats truth and truth claims as nothing more than power plays.

Oddly enough, while people of faith haven’t really found their feet in confronting this idealogy, a handful of classically-liberal secular commentators certainly have. Among the most prominent is the once-obscure Canadian academic Jordan Peterson, who rocketed to influence in recent years for his insistence–against great opposition–that truth exists and truth matters.

Yesterday he gave the commencement address to my son Zack’s graduating class at Hillsdale College in the US on the theme of “the choice at the crossroads.” I recommend watching the whole 40-minute address; but here too is a link to the conclusion in order to capture the emotion that printed word doesn’t convey: 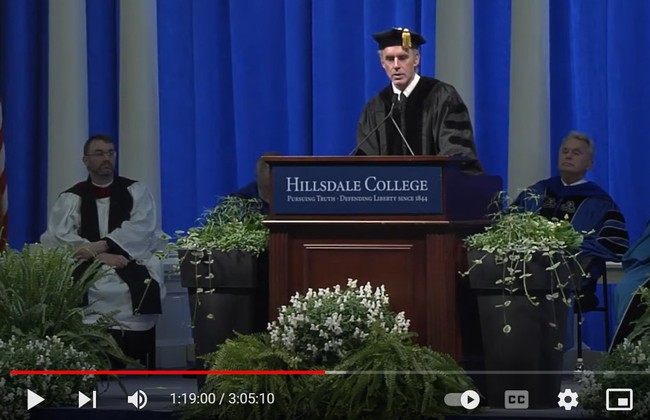 I’ll tell you one thing: if you tell the truth you have no idea what’s going to happen to you. Because you have to let go of that. I’m going to say what I think, and I’m going to assume–faith–that whatever happens if I am telling the truth is the best thing that could happen, because the truth brings about what is best. And even if it looks hard for me, because it might be, because people take the easy way out often when they lie–even if it looks bad for me, that doesn’t mean it’s bad. It just means I don’t see the whole picture. And if you believe that the truth will set you free, and that there is such a thing as the truth and that truth is redemptive, then you’re pretty much stuck with that conclusion.But one of the remarkable things about that, and this really is worth knowing, is that if you do that you will have your adventure. Right, that’s the Abrahamic adventure. You know, the call from God that justifies your life because of the excitement of what you’re doing. And the truth does that. And if it’s the truth man it’s your adventure. Because what bloody adventure are you having if you tell someone else’s story?

…the essential insistence in Christianity is that the good….is reflected in the image of Christ which is an image of acceptance of the suffering of life and the necessity of serving the lowest as the highest calling. And that’s something and it might be true. Like really, actually 100 percent true. More true than anything else, and I actually think it is, partly because the freest societies that we have, that the world has ever known, the most successful societies, are predicated on precisely that idea as an unshakeable foundation, a self-evident truth in the case of your country.

And so it might be true. And if it is true and it is real then why in the world would you ever attempt to do anything else? And it’s kind of earth-shattering in some sense to take this with real seriousness. It’s all very frightening. If you’re not afraid of that vision and what it implies for you and your soul then you didn’t understand it. But it’s also an unbelievably endlessly promising vision of what your life could be.

And you know you might think I need a life so rich that I can justify its suffering. And that’s really asking for something because there’s no shortage of suffering in life. No one thinks their own suffering isn’t real. And maybe there’s a possibility that there’s some aim that is so high that the attempt alone to move in that direction is of sufficient value to act as a panacea for the suffering.

And so you can say at the end of your life, “Oh my God, that was so hard. But it was worth it.”

And so that’s the choice you make at the crossroads. If you have any sense.