Increasingly I am stunned and perplexed when sending out the Thursday Shevet Prayer letter.

So many children from so many places coming and going and living and dying and in the midst of long struggles in the ICU. I start to identify with the handful of disciples that were following Messiah:

When Jesus looked up and saw a large crowd coming toward Him, He said to Philip, “Where can we buy bread for these people to eat?” But He was asking this to test him, for He knew what He was about to do.

Philip answered, “Two hundred denarii would not buy enough bread for each of them to have a small piece.”

One of His disciples, Andrew, Simon Peter’s brother, said to Him, “Here is a boy with five barley loaves and two small fish. But what difference will these make among so many?”

“Have the people sit down,” Jesus said. Now there was plenty of grass in that place, so the men sat down, about five thousand of them.

Then Jesus took the loaves and the fish, gave thanks, and distributed to those who were seated as much as they wanted.

And when everyone was full, He said to His disciples, “Gather the pieces that are left over, so that nothing will be wasted.”

So they collected them and filled twelve baskets with the pieces of the five barley loaves left over by those who had eaten.

When the people saw the sign that Jesus had performed, they began to say, “Truly this is the Prophet who is to come into the world.”

Yes, I cannot understand how all these things are happening when I look at the resources of our small circle. Then with great gratitude I realize we are seeing the power of God, and I join in saying truly this is the Prophet Moses promised to the people of Israel:

The LORD your God will raise up for you a prophet like me from among your brothers. You must listen to him. This is what you asked of the LORD your God at Horeb on the day of the assembly, when you said, “Let us not hear the voice of the LORD our God or see this great fire anymore, so that we will not die!”

Then the LORD said to me, “They have spoken well. I will raise up for them a prophet like you from among their brothers. I will put My words in his mouth, and he will tell them everything I command him.

One image stands out in the swirl of activity described in the most recent prayer letter: 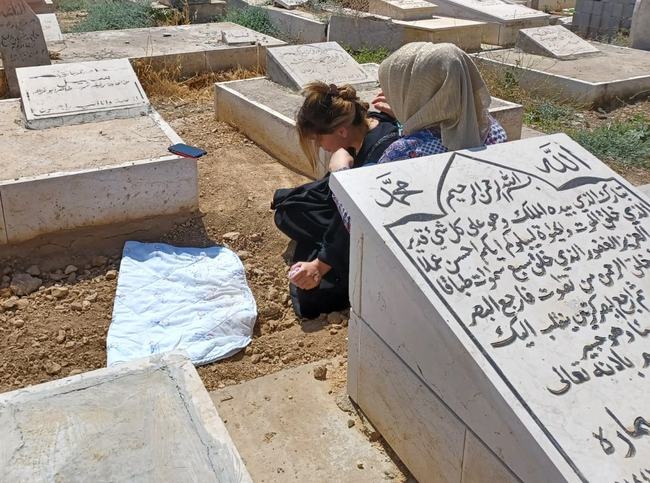 Somehow Joanne and Bria and Lilly found grace under all the pressure, and the day after Shavuot/Pentecost brought Racheal’s mother to Jerusalem to bury her little daughter on the hilltop above the Garden Tomb. Laying on the earth is the blanket from the Sheba ICU, the only place the mother knew for her first 40 days in Israel.

I first wrote you about the significance of this place two years ago:

… the highlight of our expedition was going into the vast Muslim cemetery on the “Skull Hill” which is above the Garden Tomb. This is a sensitive area but God has given us relationships and favor there through the burial of children who have not survived their heart surgeries in Israel. From the top we can see an otherwise hidden topographical truth: this long ridge, hidden in the bustle of the city, is actually the direct continuation of Mount Moriah, on which the biblical temples were built: 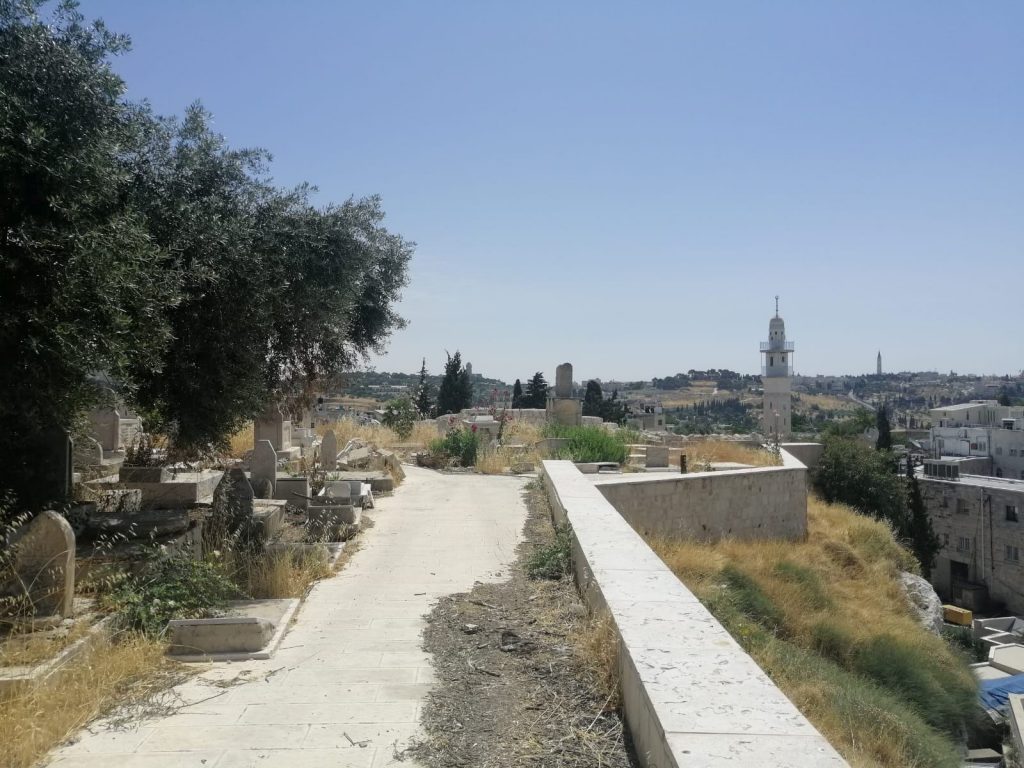 This means that Abraham’s ancient prophecy at the binding of Isaac–“on this mount the LORD will provide”–may have been fulfilled not just through the centuries of temple sacrifices, but came to its awesome completion when Messiah, the only son, finally gave his life here, on the eve of the temple’s destruction.

How exciting it is to piece together these events of the first century. And even more so because of the impact it can have on our ministry now in the twenty-first century. This early Jesus movement is far, far closer to the culture of our Muslim and Jewish neighbors than is Western Christianity. Let’s pray that Jerusalem’s ancient past will be used by God to throw new light on its glorious future.

Every Muslim family we bring to Israel greatly desires to go to the Temple Mount, enter the Dome of the Rock, and see the stone outcropping which, according to both Jewish and Muslim tradition, is the very place where Abraham was willing to offer up his son, and where the atoning ram was given instead. Some believe this stone was within the Holy of Holies in the biblical temples.

Surprising and unprecented is the surging desire of modern Israelis to make the same pilgrimage to the Temple Mount: 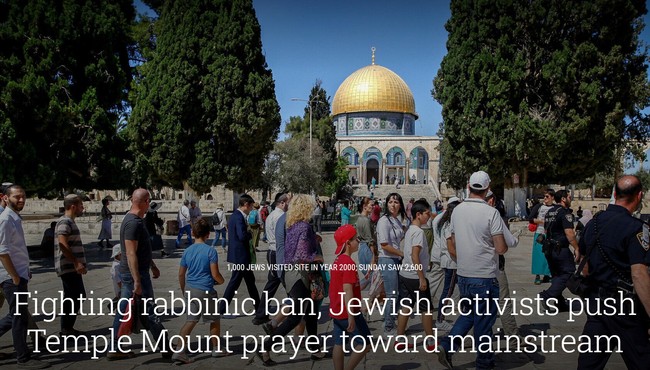 Among the most successful political movements in Israel in recent decades has been one relating to the Temple Mount, turning what was once an exceedingly fringe view held solely by members of the national-religious camp into something that even a significant number of secular Jewish Israelis can agree with: that Jews should be allowed to not only visit but pray on the Temple Mount.

That shift — truly a dramatic one, historically speaking — was on display on Sunday as a record number of Jews visited the site to celebrate Jerusalem Day, which marks Israel’s capture of East Jerusalem in the 1967 Six Day War, the first time that the Temple Mount was in Jewish hands, at least nominally, in some 2,000 years…

For decades, religious authorities issued strict prohibitions against visiting the Temple Mount, widely considered to be the holiest site for Jews, on the grounds that people could accidentally defile the site. And until relatively recently, these bans were accepted by the overwhelming majority of Israel’s Jewish public.

In recent years, however, a relatively small but intensely dedicated faction from Israel’s so-called “national-religious” camp — Orthodox Jews generally associated with right-wing, hawkish politics and crocheted yarmulkes — has chipped away at that consensus view of halacha, or Jewish law, issuing rulings that allow or even require visits to the Temple Mount — to some parts of it, anyway, and under certain conditions.

With those dueling rulings in place, more and more religious Jews have felt comfortable ascending the Temple Mount — often immersing themselves in a purifying mikveh beforehand — which has enabled the activists to slowly alter what is considered acceptable behavior for Jews on the esplanade.

In addition to this one-two punch of reinterpreting halacha and establishing facts on the ground, Jewish Temple Mount activists have also fought a stunningly successful public relations battle, shifting the discourse around Jewish visits to the site from an outlying religious issue to a cause that even secular and liberal Israelis can agree with: freedom of worship and national sovereignty.

Even as Foreign Minister Yair Lapid sought to calm tensions around the Temple Mount last month by pledging Israel’s commitment to the status quo — saying, “Muslims pray on the Temple Mount, non-Muslims only visit. There is no change, there will be no change” — he voiced some unease about that framework, which he deemed discriminatory.

“By the way,” he told international reporters, “I don’t feel comfortable with the idea that Jews do not have freedom of religion in the State of Israel and that Jews are banned from [praying at] the site.”

The result of these efforts by national-religious activists in recent years has been a meteoric rise in visits by Jews to the Temple Mount; a profound change in the status quo on the site, and some violations of it; and far greater support for both of these developments among mainstream Israelis.

Indeed, a recent survey of Jewish Israelis by the Israel Democracy Institute found that exactly half support allowing Jews to pray on the Temple Mount, with three-quarters of these saying that they support it because it would send a message about Israel’s control over the site, while only a quarter said that it should be allowed because of religious reasons. Forty percent of those polled opposed Jewish prayer on the Temple Mount, with 57.5 percent of them saying that they were against it because it “might invoke a severe negative reaction from the Muslim world,” while the rest said they opposed it because they believed it was forbidden under Jewish law.

Friends, through the long history of the Gentile church–even a generation ago–few could have dreamed we’d be having these conversations today. We can understand why our fathers developed theologies transferring to the church the prophetic promises given to Israel.

But friends, if we still hold to those theologies today we are without excuse. It’s beyond time to open our eyes and open our hearts. The glorious redemption of Israel, and of the world, is underway:

This is the message that was revealed to Isaiah son of Amoz concerning Judah and Jerusalem:

In the last days the mountain of the house of the LORD will be established as the chief of the mountains; it will be raised above the hills, and all nations will stream to it.

And many peoples will come and say:

“Come, let us go up to the mountain of the LORD to the house of the God of Jacob. He will teach us His ways so that we may walk in His paths.”

For the law will go forth from Zion, and the word of the LORD from Jerusalem. Then He will judge between the nations and arbitrate for many peoples.

They will beat their swords into plowshares and their spears into pruning hooks. Nation will no longer take up the sword against nation, nor train anymore for war.