A blog caught my eye this week about a religious Jewish doctor whose life was saved by an Arab nurse and Arab lifeguard who were passing by in Jerusalem: 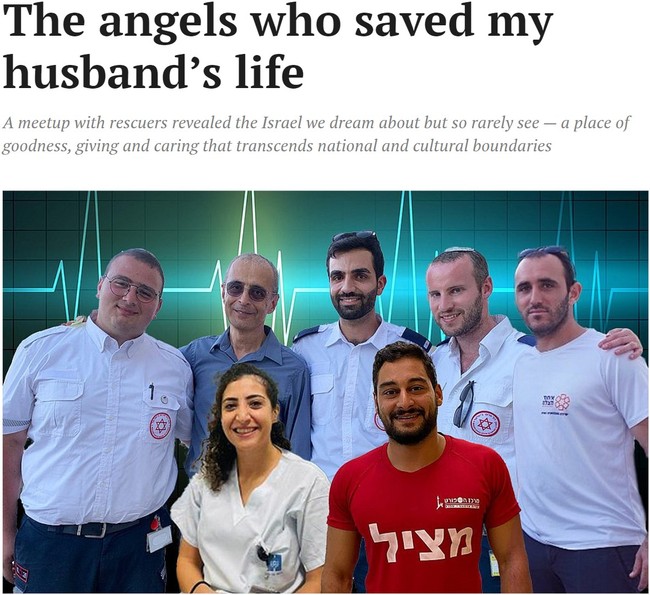 With a sudden jolt I recognized that the doctor (in blue shirt above) was the deputy director of the rehabilitation hospital in Jerusalem, who was coming the next day to decide if they could help our little Somaia from Gaza get off the ventilator, after five months in the Sheba ICU: 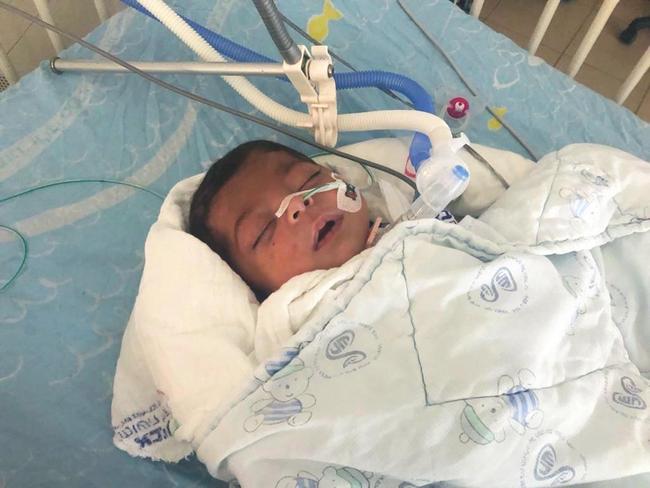 He’ll understand the importance of this, I thought. And indeed simply by making the long trip to see Somaia he showed that he did. (He found that Somaia won’t be a candidate for weaning from the ventilator for another six months, so we’re still praying for a safe, supportive place meanwhile for Somaia to survive and grow).

There’s something holy and close to the heart of God about each encounter when Muslims and Jews honor and respect and value each other’s lives. It’s like the day Isaac and Ishmael came back together to bury their father Abraham in Hebron.

We saw it today when the Muslim mother of newborn Ayub from Gaza handed her baby over to Jewish doctors for life-saving surgery to switch his great arteries: 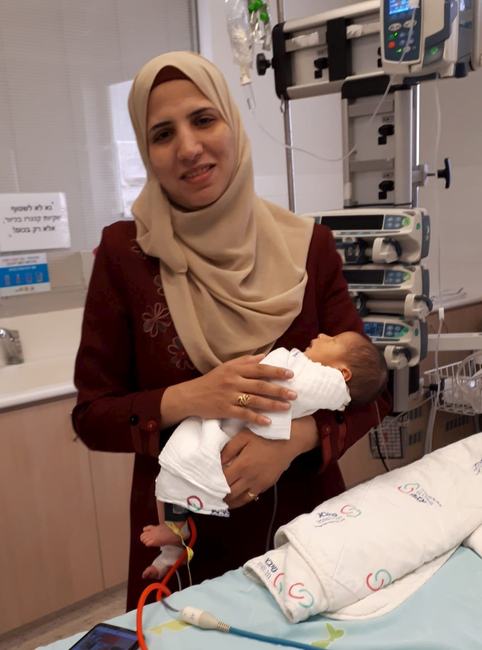 And our new German coworker Jakob felt it this week as he waited hours with the father of Laith, as doctors finally were able to disconnect his son from ECMO heart-lung support: 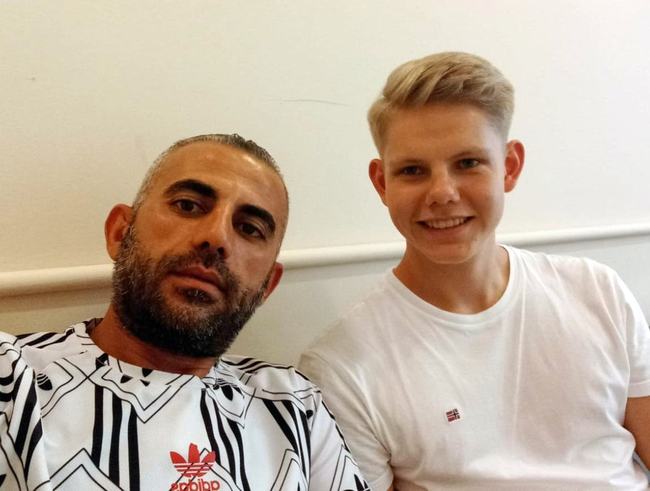 The father was talking to an orthodox Jewish family whose child was also being treated. Again and again, they asked how Laith was doing and shared the sorrow and the hope of his father.

When I sat down and introduced myself, they asked about Shevet Achim’s work. Since Laith’s father is from Hebron and therefore speaks Hebrew well, he explained to them that our Christian community takes children with heart disease from the Middle East to Israeli hospitals to enable them to receive treatment there.

With a brief but hearty nod in my direction, the family man expressed his respect. After Laith’s father shared a soda with me, the Jewish family also offered something to drink.

This experience at Sheba Medical Center made me very glad. Here people work and pray for the life of little Laith, no matter which religion they belong to.

And if you have time, here’s a revealing 20-minute video about two mixed Jewish-Arab cities side-by-side in Israel. In last year’s Gaza-inspired riots one city burned and the other did not. The difference appears to have been faith leaders who went out of their way to honor and protect each other: 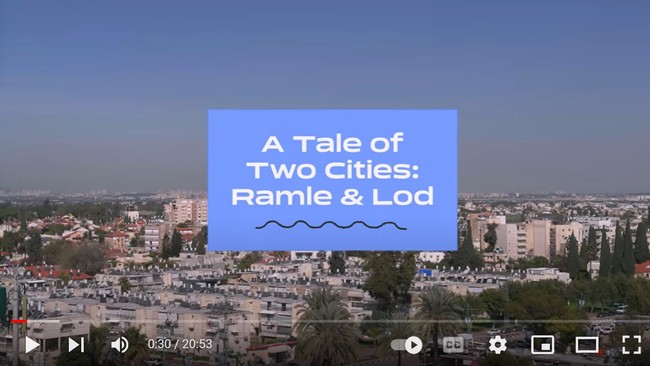 Now you know that Shevet Achim is not interfaith in the sense of checking all truth-claims at the door in order to have vague, feel-good, hot-air conversations with our neighbors. We’re firmly rooted in the Torah which says that Abraham’s seed was chosen to be a blessing to all the peoples of the earth. And in the Prophets who say that all nations will come up to Jerusalem to worship the God of Israel. And in the New Testament which says that we non-Jews must join ourselves to Israel’s faith, to Israel’s covenant, to Israel’s Messiah, if we are to be saved.

But if the work of Messiah was to tear down the wall of division between Jew and non-Jew, I believe we can bless every honest initiative in that direction. Just as we can reject as anti-Messiah every initiative which would use religion to promote division and rejection of the Jewish people and of Israel.

Today is the 21st anniversary of the massive 2001 terror attacks in the US, and Joel Rosenberg has published a revealing glimpse of how Osama bin Laden’s hatred of Israel was at their core:

But in June of 1967, as he approached his tenth birthday, Osama and the rest of the Arab world experienced another major trauma.

They watched the tiny State of Israel devastate the Soviet-funded, -trained, and -armed military forces of Egypt, Syria, and Jordan in just six days.

Why? the emotionally devastated Osama and his friends asked themselves. What was going wrong? Why was Allah turning his back on the Arab forces?

They were not the only ones asking such questions, of course.

It seemed as if everyone in the Islamic world was asking what was going wrong.

The first time Osama bin Laden heard an answer that made sense to him seems to have been around 1972, in his freshman year of high school.

It was then that he met a Syrian gym teacher who was a member of the Muslim Brotherhood, the Islamic jihadist group founded in Egypt in 1928 by a charismatic radical Sunni cleric named Hassan al-Banna.

Applying the teachings of al-Banna to the disaster of the Six-Day War, the gym teacher explained to bin Laden that the Arabs had turned their back on Allah by embracing the godless Soviets, so Allah was turning his back on the Arabs. Apostasy was crippling the Arab people.

Only if the Arabs purified themselves, turned wholly and completely to following the teachings of the Qur’an and engaged in holy war against the Jews and the Muslim apostates could they ever regain Allah’s favor and the glory that was once theirs.

The more bin Laden heard, the more he began to buy into the Radicals’ ideology.

As he did so, he experienced a religious and political awakening, concluded Lawrence Wright in his landmark and Pulitzer Prize-winning book, The Looming Tower: Al-Qaeda and the Road to 9/11.

“Osama stopped watching cowboy shows,” Wright wrote. “Outside of school, he refused to wear Western dress. Sometimes he would sit in front of the television and weep over the news from Palestine. . . . He began fasting twice a week, on Mondays and Thursdays, in emulation of the Prophet. . . . In addition to the five prayers a day, he set his alarm for one in the morning and prayed alone every night.”

As he approached his 16th birthday in 1973—and underwent a massive growth spurt that left him 6’6″ tall and 160 pounds—bin Laden was again stunned and horrified to see the Jews of Israel defeat Egypt and the Syrians during the Yom Kippur War.

Now the Muslim Brotherhood argument made even more sense.

Arabs were getting slaughtered and utterly humiliated by Israelis and by the West because they had lost their way and forgotten the path of the prophets.

While religion can be the most divisive force on earth, the truth of the word of God can help us overcome seemingly irreconciliable religious differences. Consider this essay from the Catholic journal First Things this week celebrating the role of Francis Schaeffer in the pro-life movement:

Francis Schaeffer is very much the “father” of the pro-life movement among protestants. Without his work and influence, Dobbs may never have come to pass. Garry Wills, in his book “Under God,” rightly notes that regarding the increase in pro-life activism, “One man deserves more credit than anyone else—Francis Schaeffer.”

It was Schaeffer who developed the vision and framework for the pro-life movement as we understand it today. And yet, he was the exception during the early post-Roe years. Shortly after Roe was decided, former [Southern Baptist Convention] president and pastor W. A. Criswell “felt that it was only after a child was born and had a life separate from its mother that it became an individual person.”

Evangelicals in the middle of the last century were largely unconcerned about the atrocities of abortion, and were ambivalent toward activism on the matter. Advocacy for the unborn was deemed a “Catholic issue,” unimportant to many protestants.

Not to Francis Schaeffer.

Because human beings are made in the image of God, they possess inherent dignity. This principle influenced Schaeffer’s apologetics as much as it did his public theology. He embodied this doctrine in the way he conversed with skeptics and cared for the most vulnerable. He believed each and every individual—regardless of their age, status, race, nationality—had immeasurable worth as a human being.

Friends may we too, in whatever place or situation we find ourselves, be unflinching advocates of the worth of every human. By honoring the creature, we give glory to the Creator.