As you may know we are an entirely volunteer community, and families who’ve been with us for a heart surgery will often then turn around and help other families to come. In northern Iraq one Muslim mother in particular has helped scores of other families prepare to travel.

She’s much more diligent, caring and sacrificial than I am, and is often sending me applications for minority families such as Yazidis or Assyrian Christians. I’ve teased her too many times by replying: Do we help Yazidis? Do we accept Christians?

Each time she dutifully replies: You help everyone who has need.

I hope there is humor in this, because I hope it is so self-evident that the love of God knows no such boundaries. This is the greatness of the parable of the Good Samaritan, which Jesus told in response to the question “Who is my neighbor?”

In a similar way, when we chose the name Shevet Achim for our community we wanted to raise the question “Who really is my brother?”

So I found the following email encouraging this week from a longtime friend of our community in Texas:

As I read Acts 2 & 4, I find that the Church’s present stand on community isn’t Biblical. The Church (and sometimes “we”) divide the world up into US & THEM. In the area of the Acts portions I’ve mentioned, I don’t see that. ALL of Jerusalem found the believers a blessing. The believers, I think, treated all as equals, both believers and other neighbors.

Today the Church will make “friends” with a non-believer, but it’s mostly for evangelistic friendship. After a while if the person hasn’t made a “decision” for our Messiah, we kind of write them off and slowly allow the relationship to terminate. Biblical community doesn’t operate like that. It operates like Shevet does. Those families in your community are not just “targets” to shoot with the Gospel. You treat them as friends and you don’t let go of them. Your relationships are “forever relationships” like family and believers. You do little to differentiate between the three (3) groups, treating them all as people made in the image of G-d.

Encouraging, yet also convicting. I can immediately think of times we’ve fallen short in honoring our neighbors. Lord help us to love others with simplicity and sincerity of heart.

We’re also sometimes tempted to discriminate on the basis of medical background. Each time we’re presented with a child with hypoplastic left heart syndrome I sigh and try to muster a mustard seed of faith. These kids can be described as having half a heart, and even after multiple difficult surgeries their prognosis is poor.

Four weeks ago I wrote you about bringing hypoplastic baby Laith from the hospital in Hebron. I’m really proud of how the doctors in Israel fought for his life over these weeks, and how our young coworkers loved Laith and his father throughout the battle. 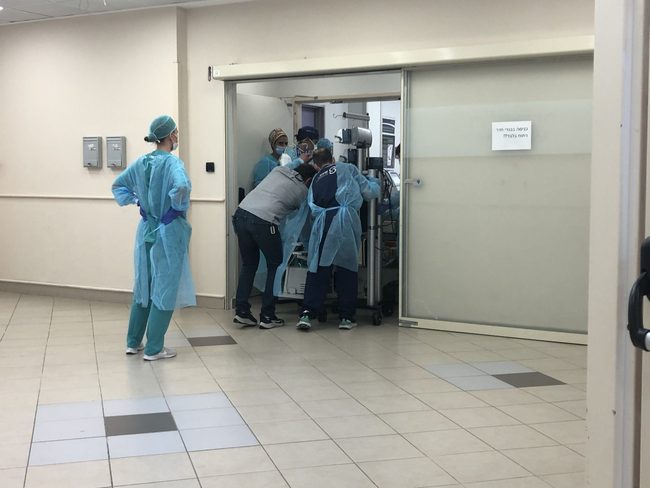 Wednesday night Laith died after coming off a lengthy period of ECMO heart-lung support in the hospital in Israel. Here’s Jakob’s final blog:

After a long and hard fight, Laith has been relieved of all his suffering at 20:10 today. The Lord has taken him back to his home in heaven. God, please bless him, his family and the doctors who gave their best for Laith’s life.

In the last few weeks, including the surgeries, hopes and fears, we have always been aware of how serious little Laith’s condition was. Nevertheless, we were stunned when a doctor told us this morning that his way was now coming to an end. He explained further that they had tried all their available options, but Laith’s body was not responding to the treatment. Now they would have decided to give Laith the appropriate medication to relieve his pain. His death was a matter of hours and only God knew when exactly it would happen.

Those next several hours I spent with Laith’s father. I still cannot understand where he got all his strength from during the time of waiting that followed. That he communicated warmly with children in the waiting area and continued to praise the Lord all the time, deserves great respect.

This evening, as we were standing by little Laith’s bedside in the ICU, he kept stroking his son’s hand, which was turning black from the lack of oxygen. On the displays we could see Laith’s organs stop working and alarm sounds signaled that Laith was now dying.

It’s terrible to see a child dying in front of his father. For the past few weeks, Laith’s father has stayed by his side faithfully and did everything that could be done. Now he has to let him go away.

Sometimes we can’t understand God’s plans and it seems just unfair that Laith is denied his life. Nevertheless, we can trust in God’s grace and love. He has a plan for Laith – albeit not on this earth.

Please pray for Laith’s wonderful family who fought so faithfully for him. God bless the parents and his two older siblings who lost their little brother today. Accompany them in this difficult time and put people by their side who are a blessing to them. Amen!

The next night Yakob and I went to the family’s home in Hebron as they received a stream of visitors to share in their mourning. The tradition is to sit together outside and share in bitter coffee and a sweet date. How humbling that in the middle of all this the family called us inside to share an elaborate meal they’d prepared for us. How much we’ve learned about honoring others from our Muslim neighbors.

Midway through Laith’s treatment we heard about another hypoplastic left heart in the West Bank. The diagnosis of newborn Mohammed sounded a little tentative though, so we strengthened ourselves in the Lord and also brought him to Israel. Today doctors at Sheba took him to surgery, and Petra shares they maybe surprised even themselves by coming out with a heart functioning with both halves: 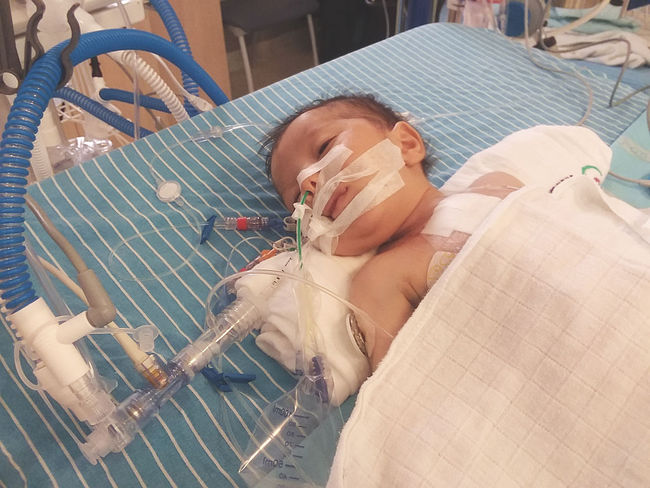 It reminds me of the Eastern European rabbi who gave something to every beggar who approached him in the street. His disciples reproached him: “Don’t you know that nine out of ten of these people aren’t really in need?””I’d rather be taken advantage of nine times,” he replied, “than turn away even one who really needed my help.”

Which may remind us of our Middle Eastern rabbi, who would leave behind 99 sheep to go and search for the one who was lost.

The latest of our lost sheep was plucked out of the Gaza Strip on Thursday; three-week-old Jamal has transposed great arteries, which Sheba doctors will attempt to switch in a major surgery in the next 1-2 days: 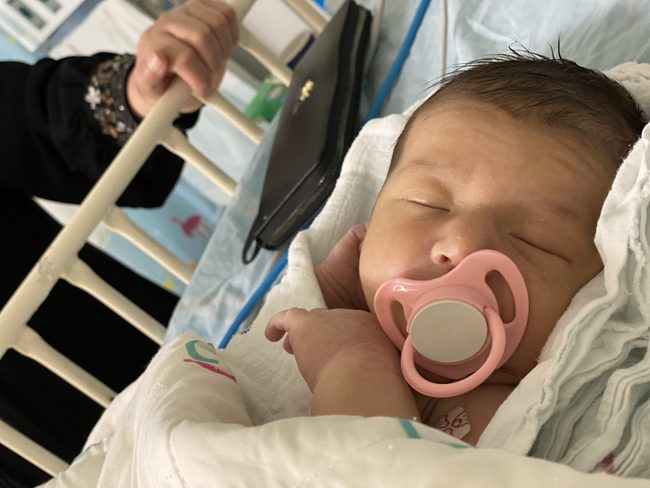 And just this afternoon we received emergency visas to bring two more tranposition babies from northern Iraq to Israel. God willing we’re aiming to bring them on Wednesday in advance of Rosh Hashanah and the fall holidays.

Mira from Hebron was also rescued as a newborn; now a toddler she was sent back home today after doctors removed the stitches from her second heart surgery: 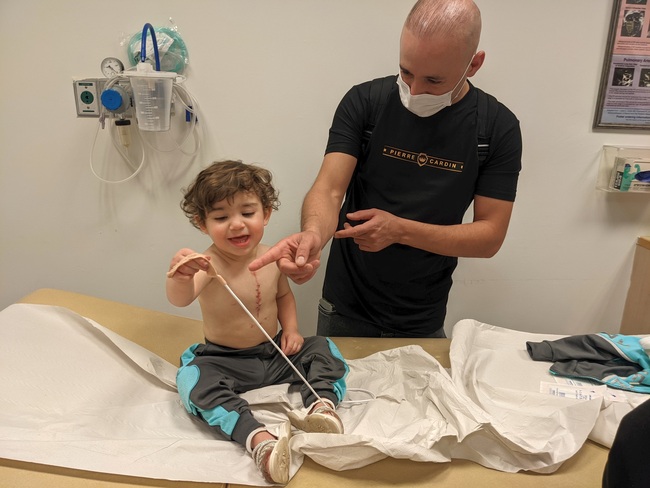 And Bria shares that 11-year-old Lewan and her mother were “absolutely overjoyed” today when Lewan was discharged back to Kurdistan after her second heart surgery: 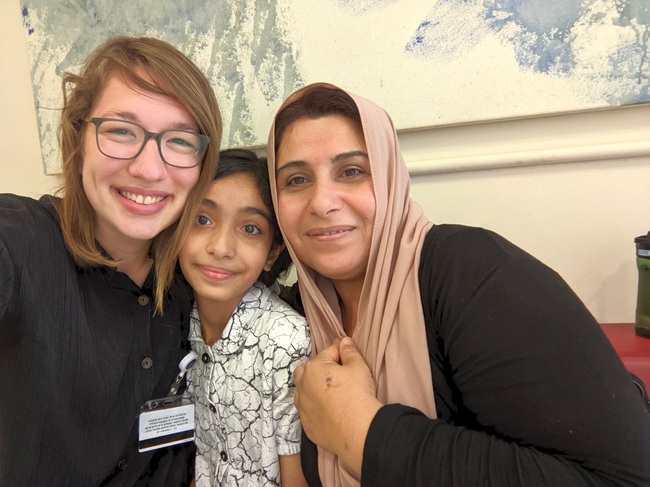 Meanwhile reinforcements continue to arrive as we rebuild the Shevet community in Ashdod; this week we welcomed Craig from New Zealand, bringing us to a total of 15 volunteers from five of the six inhabited continents: 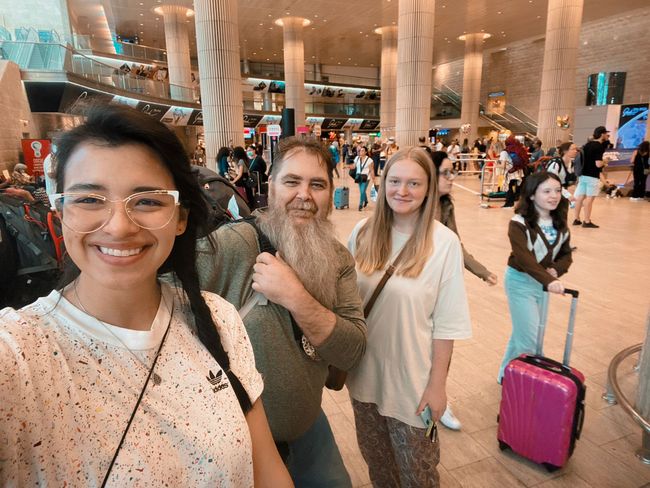 So yes, just as the prophets have spoken, foreigners are coming from the ends of the earth and partnering with the restored Jewish people to bless their neighbors. But a stark reminder is out this week of how much past failure we have yet to deal with, the six-hour documentary “The US and the Holocaust” by Ken Burns:
Even viewers who know a great deal about the Holocaust era will be taken aback by some of its revelations.

I had not realized, for instance, that Anne Frank and her family, having fled from Germany to Holland, subsequently applied for sanctuary in the United States. Nor had I known how abjectly Hollywood kowtowed before the Nazis: For the first seven years of Hitler’s regime, no character in any US film breathed a word of criticism about the Third Reich. So intent were US studios on not jeopardizing their access to the German market that Hitler’s vice consul in Los Angeles was allowed to approve or disapprove scripts before production began…

The one serious weakness in Burns’s documentary is how hard it tries to justify FDR’s inaction. Repeatedly viewers are told that the president could not get out in front of public opinion, which was unwilling to open the doors to refugees. But Roosevelt, despite his vast popular following, made no effort to influence that public opinion.

Thus, amid the outrage that followed Kristallnacht, when Jewish businesses and synagogues across Germany were destroyed and 30,000 Jews dragged off to concentration camps, FDR would do no more than recall his ambassador from Berlin as a sign of disapproval. He steadfastly declined to criticize any Nazi official by name. And when legislation was offered in Congress to admit 20,000 Jewish child refugees, Roosevelt refused to speak in its favor. Just as he refused any help for the 937 refugees aboard the St. Louis who reached the coast of Florida in 1939, only to be denied entry and forced to return to Europe. Just as he refused to allow the railroad tracks leading to Auschwitz to be bombed, even as US bombs were being dropped on industrial and oil facilities nearby.

During the 12 years of Hitler’s rule, 2 of every 3 Jews in Europe were murdered. Of all the Allies, the United States was best positioned to save Jewish lives. But even in the strongest, richest, and safest country on earth, saving those lives was not a priority.

“We let our consciences realize too late the need of standing up against something that we knew was wrong,” Eleanor Roosevelt would say after the war was over. “We therefore had to avenge it — but we did nothing to prevent it.”

May God help us to listen to our consciences and to his spirit when our moments of truth come, lest we too find ourselves unprepared and finally regretful over how little we did for our brothers.