Three newborns with complex heart defects were barely clinging to life in the Gaza Strip as we entered the two-day Rosh Hashana holiday last Sunday night. Two were the dreaded hypoplastic left hearts, which have a poor prognosis. Our main partners at the Sheba Medical Center wouldn’t take any of the children, as one surgeon was leaving for a three-week vacation, and the other was leaving to try to rebuild the cardiac surgery program at Hadassah hospital in Jerusalem. No other hospitals in Israel would take them either.

These babies kept coming to mind over the holiday. It didn’t feel right to leave them. After the end of Rosh Hashana on Wednesday we even offered to pay full price for their surgeries at the Schneider Children’s Medical Center, but the management said they couldn’t make space. That night a fire broke out which closed down their whole cardiac surgery department: 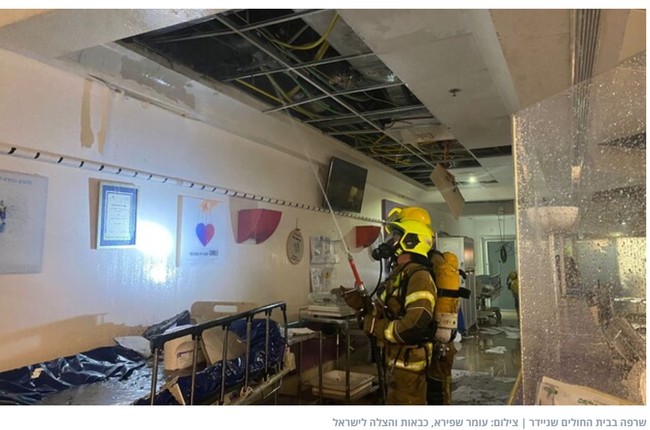 What to do? Through many years we’ve never turned away an urgent child with a heart defect for lack of space or funds. This can only mean that our Father’s hand has been over our circumstances in ways we didn’t even recognize. Was our season of grace now coming to an end?

Thursday the door cracked open at Hadassah. Even though the new surgeon Prof. Serraf would only arrive from Sheba on Sunday (today), they accepted Jude, the least complex of the three babies, to their cardiac critcal care unit on Friday:

Of course it turned out on echo that he also has a hypoplastic heart! 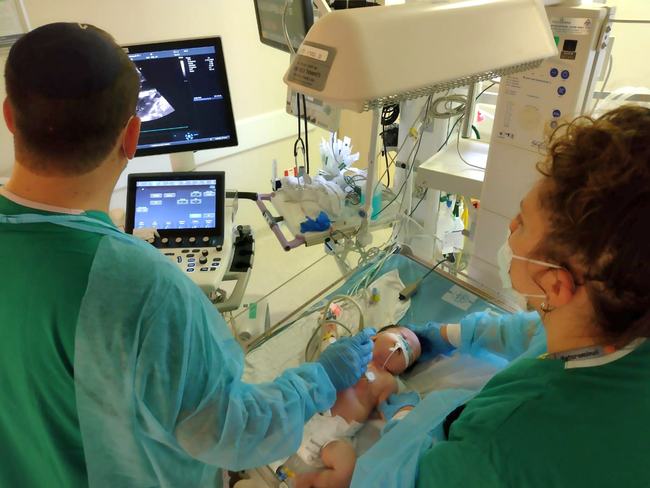 Jude’s on the schedule for surgery Thursday, the day after Yom Kippur, and will be the first child operated on by the new surgeon. Hadassah has a new pediatric cardiac ICU with eight beds that is empty at this point, so they have great potential to bless Israel’s neighbors:

But before Hadassah would agree to accept another of the urgent Gaza children, I was called in for a three-hour meeting with the financial people this morning. For heart surgeries we have a clear agreement to pay about half the normal cost of a surgery. But as we’ve also found at Sheba, there are exceptional cases where a child may have a long hospitalization for a non-heart-related complication, and these charges can multiply quickly. So Hadassah this morning asked for a payment for outstanding cases which was about three times what we were expecting.

Now it sometimes seems that hospital billing departments live by the “throw everything at the wall and see what sticks” rule. So we shouldn’t panic when huge numbers are thrown around at first. But at the same time hospitals in Israel–and Hadassah especially–are struggling financially. We always try to tell them that we came to support them, not to argue with them over bills.

At a certain point this morning I stopped making rebuttals and just tried to lower my head and pray and wait quietly. I prayed for the spirit of God to stir up their ancient calling to be a blessing to other peoples. It is clear to me that if the grace is still there for us to continue, it will come from God and not through our own efforts.

At the end they threw out a number that was a little over half of where they had started. I agreed in faith to write them checks for this amount (about $140,000). And we’re still waiting for final agreement from management about a few of these cases.

Even if in the end we feel that some of the billing is unfair, we realized in one of our community meetings this week that this is exactly the situation Messiah addressed in the Sermon on the Mount:

And if anyone would sue you and take your tunic, let him have your cloak as well.
And if anyone forces you to go one mile, go with him two miles.

What power there is in Matthew 5. Our community owes its very existence to this chapter.

But who can live like this? Our coworker Craig in the Ashdod community texted tonight that it all comes down to knowing who our Father is: I truly believe when it is God’s will it’s God’s bill. He will provide in his time and way.

Please pray with us to have faith to walk this out. Tomorrow God willing we’ll go through the same exercise with the financial people at Sheba, where our bills are much higher. The manager there Eran has appealed to us to come to agreement before Yom Kippur (the Day of Atonement) begins Tuesday night, when each year in Jewish tradition heavenly accounts are settled and the books are sealed.

In advance of the holy day let’s finish with an excerpt from “My First Yom Kippur in Exile,” by the chief rabbi of Moscow Pinchas Goldschmidt, who fled to Israel earlier this year after the invasion of Ukraine. He’s faced some criticism from rivals for abandoning his flock. But he may actually be leading the way, if the long and rich history of Jews in Russia is in fact coming to an end, just as the prophets have spoken: 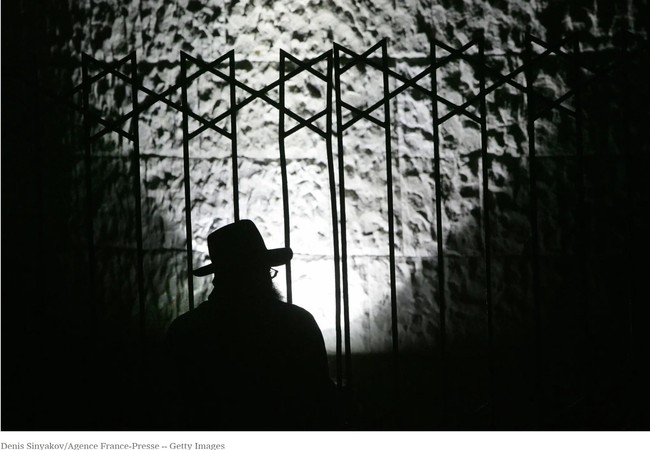 JERUSALEM — This is my first Yom Kippur in exile.

The crisp Moscow autumn air; the illuminated synagogue which I called home for 30 years; my white hat and kittel, the robe Jews wear on the High Holy Days, folded up, in my apartment that now sits locked — it all seems like a dream.

As the chief rabbi of Moscow, I used to prepare for this holiday for weeks. Some of the work was technical — securing cantors and shofar blowers for synagogues across Russia, or guiding the sick on whether or not they should fast on the holy day. Some of the preparation was more lofty: I would prepare my sermon thoughts while walking daily for early morning penitential prayers, past the bustling cafes on Pokrovka Street, down the hill on Arkhipova Street, up the stairs to the pale yellow synagogue, with its dome. In the days leading up to the holidays, one could hear the cantorial choir rehearsing in the wooden balcony of the century-old sanctuary.

For years, we hoped that democratic institutions in Russia would take root. We hoped that Jewish communities could keep their distance from President Vladimir Putin’s increasing authoritarianism. His regime’s social contract, after all, was that the population would not be politically active, while allowing the authorities to conduct their affairs. Our hopes were crushed.

After Russia’s invasion of Ukraine, everything changed. The government began to shift to semi-totalitarianism; the surviving independent media was shut down; protesters were arrested. Soon, I received reports of religious community leaders — priests, imams, rabbis — being pressured to express their support for the military. One day, a government source informed the synagogue that we would be expected to support the war — or else.

It was then that my wife and I decided to leave the country. This will be our first Yom Kippur in true exile from the place we called our home for three decades.

Moscow’s Choral Synagogue has seen many historic Yom Kippurs: In 1933, Rabbi Shmarya Yehuda Leib Medalia, one of my predecessors as chief rabbi of Moscow, gave a sermon from that pulpit. According to the stories passed down by Moscow rabbis, Rabbi Medalia, knowing that every word he uttered was being monitored, delivered his sermon that day in coded language. The Soviet authorities had declared a working day, even though it was Saturday, in order to prevent the hundreds of thousands of Moscow Jews from going to synagogue on the holiest day of the year. However, as the day neared its end, tens of thousands of Jews found their way to Arkhipova Street, to the synagogue.

In his sermon, the tale goes, Rabbi Medalia told the story of two Jews in a small village with one central road, who came to the rabbi with a live chicken. Each claimed ownership. The rabbi decreed: Put the chicken in the middle of the road and untie its legs and we will see where the chicken will go. This was the whole sermon — a veiled parable for the Jews whose legs had been untied, now finding their way to the place they belonged, the synagogue. Shortly after, Rabbi Medalia was arrested and shot by the secret police. This was the legacy I inherited…

It is strange to feel in exile in Jerusalem, in the Jewish ancestral land — but home is strange like that. Over the centuries, rabbis used to sign their names on documents, not as a “rabbi of” a certain city, but rather “as a temporary dweller” of that city. The role of a religious leader is not only to be a pastoral guide, not only to answer questions and lead services and give sermons, the beautiful and glorious moments that fill one with meaning, a sense of purpose and awe. Those are, so to speak, the easy parts of the rabbinate.

The hardest task of religious leadership is to take moral stances in difficult times, no matter the cost.

And this is perhaps what the shofar, the ram’s horn that Jews blow on the High Holy Days, represents. According to the Bible, the shofar blow is the sound of freedom. It was historically blown at the beginning of the jubilee year — the year that freed all slaves and returned all sold ancestral property. The sound of the shofar blow is meant to remind us of both freedom and equality.

When we blow that shofar this year, let us remember how a peaceful world must rely on the fundamentals of liberty and life, not only for individuals but also among nations. For so long, we had assumed these qualities were a given in Western society — until they no longer were.

When we blow that shofar this year, let us remember that it is the role of faith to counter evil, to fight for the basic human rights of liberty and life.

This High Holy Days, let the cries of that ancient horn be heard.