Our coworker Markus tonight sent us the time-lapse video above from our Jaffa community with the caption: Beautiful end of a beautiful Resurrection Sunday.

It’s been a full week for our faithful Jaffa team of just 11 volunteers who have remained despite the coronavirus. With the discharge of Kurdish Adleen after her successful heart surgery at the Sheba Medical Center, they’re now hosting eight Iraqi and Syrian families under one roof: 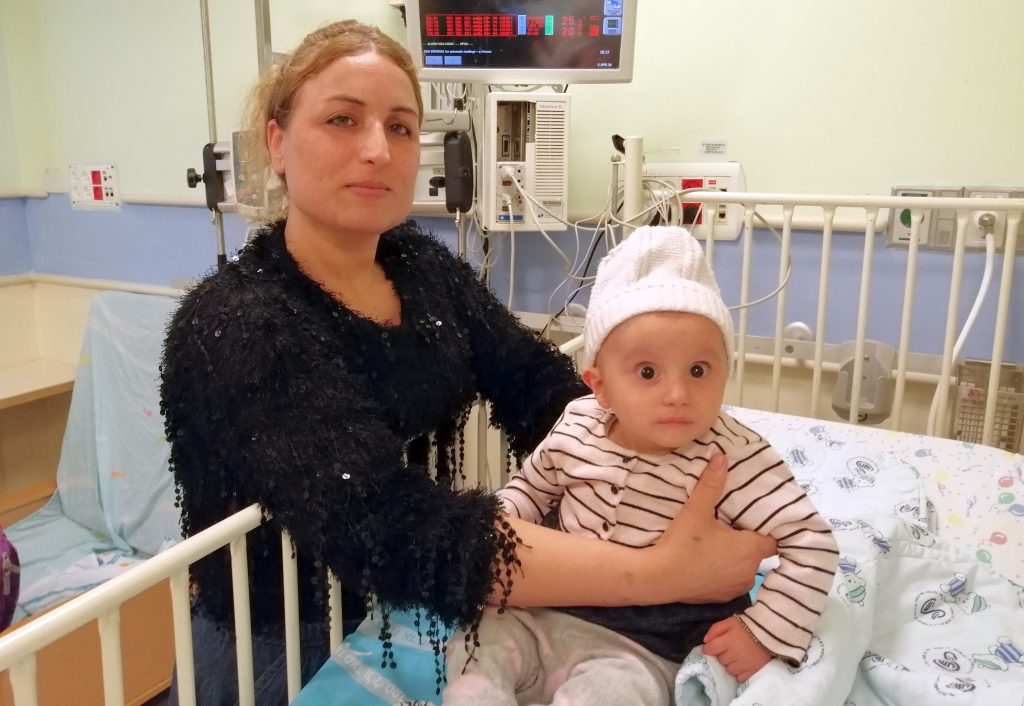 And after a couple of days of discussion and searching the scriptures, we decided this week to continue our community tradition of removing all leaven from our home during the Passover–leaving our Muslim-background brother Amar with the unenviable task of persuading skeptical Kurdish mothers that matza really is just like traditional dry Kurdish bread: 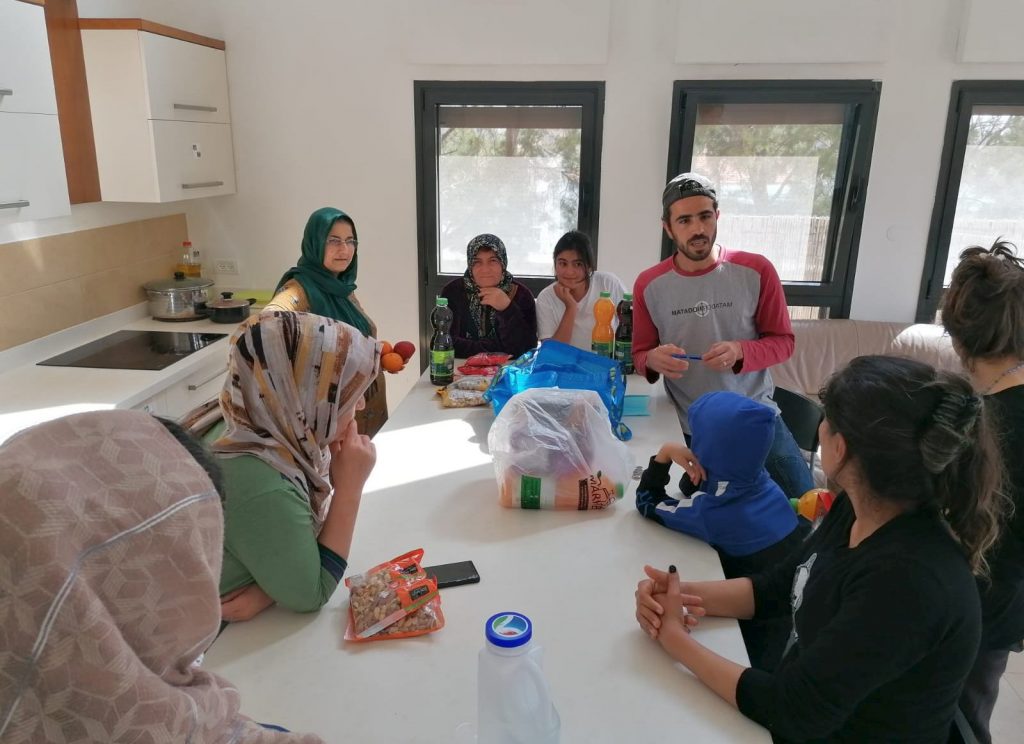 Why go to all this trouble? Well, fundamental to the Shevet Achim identity is the understanding that we as non-Jews have through Messiah been brought near and grafted in to the salvation history of the people of Israel. And we believe it’s time to invite our Muslim neighbors to return as well to the tents of their father Abraham! So it’s our privilege while living among the Jewish people to honor the Shabbats and holidays which are, according to the Torah and prophets, everlasting signs of Israel’s covenant with God.

This is especially a joy because the holidays point so clearly to Jesus. His connections with Passover are well-known to most of us. But did we know that today, the Sunday of his resurrection, is also singled out in the Torah?

When my family and I first came to Israel in 1990, we’d hear occasional references to the day of Jesus’ resurrection as the “Feast of First Fruits.” I didn’t really understand where the name came from, and when I finally learned more I had to ask in astonishment: Why have I never been told this before?

The origin of First Fruits is in Leviticus 23, the chapter which provides the fullest description of all the holy days of Israel. If we’re not paying attention it’s easy as we read to skip right past the few verses which describe what takes place during Passover week:

“And the LORD spoke to Moses, saying, ‘Speak to the people of Israel and say to them, When you come into the land that I give you and reap its harvest, you shall bring the sheaf of the first fruits of your harvest to the priest, and he shall wave the sheaf before the LORD, so that you may be accepted. On the day after the Sabbath the priest shall wave it. And on the day when you wave the sheaf, you shall offer a male lamb a year old without blemish as a burnt offering to the LORD. And the grain offering with it shall be two tenths of an ephah of fine flour mixed with oil, a food offering to the LORD with a pleasing aroma, and the drink offering with it shall be of wine, a fourth of a hin. And you shall eat neither bread nor grain parched or fresh until this same day, until you have brought the offering of your God: it is a statute forever throughout your generations in all your dwellings.’”

So the Sunday of Passover week, the day after the Sabbath, is set apart by Moses as the Feast of First Fruits: the barley harvest in the land is just ripening, and the first sheaf must be presented before the LORD before all the rest may be gathered in. Immediately we think of Paul’s picture of Jesus as the first fruits of those risen from the dead:

“But in fact Messiah has been raised from the dead, the first fruits of those who have fallen asleep. For as by a man came death, by a man has come also the resurrection of the dead. For as in Adam all die, so also in Messiah shall all be made alive. But each in his own order: Messiah the first fruits, then at his coming those who belong to Messiah.”

How amazing that Messiah was presented alive before the Father on our behalf on this very day of First Fruits, just as the lamb with bread and wine was presented in the temple.

But the story in Leviticus doesn’t end there:

“You shall count seven full weeks from the day after the Sabbath, from the day that you brought the sheaf of the wave offering. You shall count fifty days to the day after the seventh Sabbath. Then you shall present a grain offering of new grain to the LORD. You shall bring from your dwelling places two loaves of bread to be waved, made of two tenths of an ephah. They shall be of fine flour, and they shall be baked with leaven, as first fruits to the LORD.”

So this Resurrection Sunday, this Feast of First Fruits, is the trigger to start the countdown of seven weeks to something big: the Feast of Weeks (Pentecost), the second of the three pilgrimage holy days each year when all Israel is called to assemble in Jerusalem. The Torah gives no explanation of why this day is to be set apart, which led ancient sages to call it the “unfinished holy day.” (Later traditions linking the day to the giving of the law at Sinai are not taught by the Torah itself.)

So we have two holy days which are unique in falling on a fixed day of the week, Sunday; all other Torah holy days fluctuate from day to day based on the lunar calendar.

Now let’s return to Jesus, raised from the dead on the first day of this countdown. For forty days he then appeared to and taught his disciples; Paul even records appearing to 500 at one time. Then on the Friday he ascends from the Mount of Olives to the right hand of the Father, he strictly charges them to wait in Jerusalem. Nine days yet remain in the countdown launched by his resurrection.

And yes, exactly seven weeks after First Fruits, when the day of Pentecost had fully come, the world changed. The unfinished holy day was fulfilled as the long-promised Holy Spirit of God was poured out, before the astonished eyes of the Jews who had gathered from across the known world. And Peter–who like the other disciples was previously fearful, confused and vain–suddenly spoke out with the boldness of the lion of Judah. The word of God from his lips to the multitudes cut them to the heart, and they asked “What shall we do?”

Friends, what a day. This is the power we disciples still need if we’re to accomplish the task Jesus gave us. Why are we not thrilling to remember this countdown each year from Resurrection Sunday, cherishing each day of “counting the omer” (the days since the first fruits offering) just as the Jewish people still do?

This is particularly a weakness of the non-liturgical Western churches in which many of us grew up in the faith. We can allow this precious day of Pentecost to come and go without even a mention in our services. How the traditions of man can blind us to the word of God.

In this case not only Christian but rabbinic tradition has led us astray. After the Second Temple was destroyed (the prediction of which was one of the chief charges against Jesus), it fell to the Pharisees to rewrite the book of what became normative Judaism. As opposed to the literal interpretation of other Jewish schools of thought (Sadducees, Karaites, and Samaritans), the Pharisees claimed that “the day after the Sabbath” of Passover week wasn’t really Sunday, but rather whichever weekday happened to fall after the first day of Passover, since that day also was treated as a day of rest. There is no Torah precedent however for such an interpretation of “Sabbath,” and this new reading of the text had a radical effect: the Feast of First Fruits, and Pentecost seven weeks later, would no longer fall on a fixed day of the week. Especially the Torah would not single out so uniquely the Sunday of Passover week, the day on which certain heretical Jews claimed the Messiah was raised from the dead!

So this year of 2020, for example, the rabbinic calendar has the counting of the omer starting on Friday, April 10, meaning Pentecost is also celebrated on a Friday, May 29. For those of us living among the Jewish people, this misplaced holy day can easily cause us to miss the true and intimate connection between Resurrection Sunday and Pentecost Sunday.

God forbid that we allow the real Pentecost to pass by unnoticed on Sunday, May 31. We who desperately need the power of God can ill afford to ignore the day long ago set apart for the outpouring of the Holy Spirit. The spouse who blithely forgets a wedding anniversary does not jeopardize the relationship itself; nevertheless the partner is grieved to know that their gift of covenant love appears valued so lightly.

Friends, just as we honor Resurrection Sunday let us honor Pentecost Sunday seven weeks later: for it is the raising of Jesus that made it possible for God to dwell in us through his Holy Spirit.