The end is near…but not yet.

It feels like the world is exhaling a long breath of relief this weekend. Coronavirus infections haven’t spiked since Europe loosened lockdowns. And a month since the New York Times claimed the US government was privately projecting “The daily death toll will reach about 3,000 on June 1” daily rates have instead plummeted to about 800: 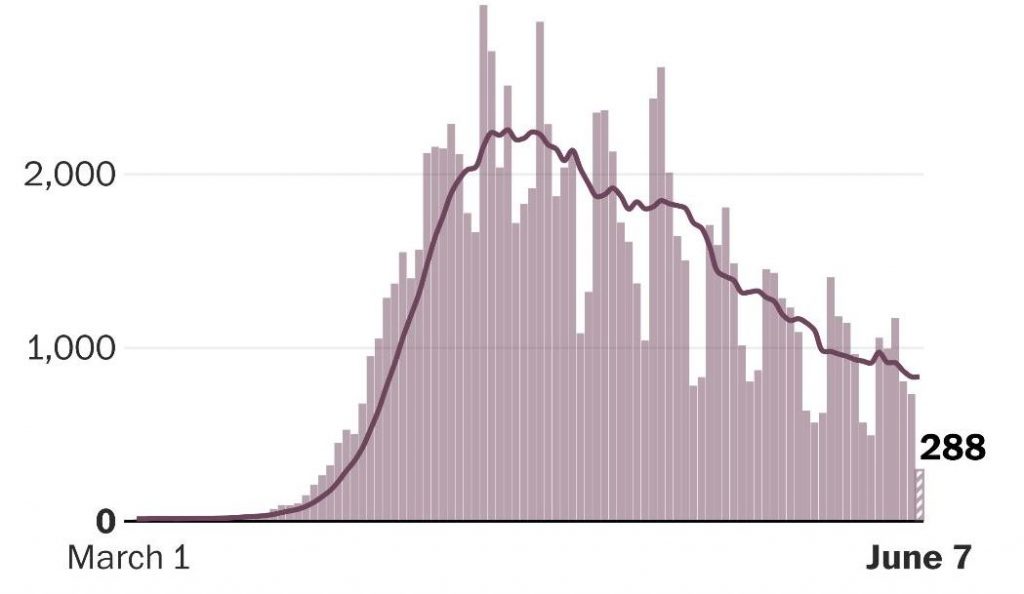 Until two weeks ago churches that dared hold even a drive-in service were excoriated as threats to humanity (actual Washington Post headline: “What’s really behind Republicans wanting a swift reopening? Evangelicals.”

And yet. As people of God we should receive the good coronavirus news not with an argumentative “I-told-you-so” spirit but instead with gratitude, love and humility. And also a healthy searching of our own hearts, and recognizing the signs of the times. Let me share with you an important admonition by Marcel Rebiai, the respected leader of the Community of Reconciliation here in Israel:

In the coming time we will experience an increasing polarization and separation of light and darkness, lies and truth, righteousness and falsehood, faith and godlessness. This will also happen within the Church and Christendom: A separation of the wheat and chaff. This judgement, breaking in over us, is an examination and exposure of the motives and attitudes of our hearts – both of those who believe in Jesus as their saviour, and those that do not. We, the Church of Christ, are being shaken, so that only the unshakeable will remain.

Many of the regulations that were issued during the crisis will remain effective afterwards. The world has been ordered anew – so we are told also by the powers that be. Believers will be forced to choose between submitting to this new world order, based entirely on humanity and for a system without the God of the bible, or staying faithful to Jesus and to God’s order, possibly paying an exacting price in persecution. Remember that we may be in the world, but are not to be OF it! We do not belong to this world. This will become increasingly obvious. Men and women of faith will fall outside of the norm in an increasing fashion, will become outsiders. They will be seen as a stumbling block, a moralizing, anti-freedom community, narrow-mindedly and fanatically opposing the great unity and brotherliness of humanity that this crisis is leaving in its wake. Enmity and hate against the name of Jesus will show itself more and more unmasked and all who profess the name of Jesus will be seen as enemies and haters of humanity. But Jesus bears witness to himself as the only way, life and truth; there is no other way to salvation, peace and redemption except through him and in him…

The real battle is a battle for the immortal souls of men. God does not want us to remain under the power of the Evil One and share in his fate of damnation. God wants to save us, but He will not force His help on anyone. The more the dark night of godlessness spreads across the world, the clearer and louder our testimony must be so that people who yearn after truth and salvation hear our message, see our light, and can find the path to life.

God has given us clear instructions on how to overcome evil and be steadfast in our own lives. “They triumphed over him by the blood of the Lamb and by the word of their testimony; they did not love their lives so much as to shrink from death.” (Revelation 12:11). We overcome by the proclamation of the redeeming blood of the Lamb of God, Jesus, God’s son, who alone is Lord over life and death. We will not allow ourselves to be corrupted and silenced by fear. Even if this means – in the eyes of the world – becoming enemies of human freedom and breakers of the new law. Should it be necessary, out of love for Jesus, we will lay down our lives, knowing that our inheritance and future are eternal life with the Father.

Come now, it can’t be that serious. This is just a health emergency. Aren’t you believers exaggerating? Well consider the rapidly-spreading repudiation of anyone, anywhere who would publicly hold to biblical sexual morality: this spring a mainstream Finnish politician interrogated five hours by police for daring to tweet Romans 1. And just today here in Israel the president pushed back against orthodox Jews who hold to a Torah view on homosexual conduct: “We cannot, in a society like ours, talk about conversion therapy for LGBTQ people. We cannot allow it. There is no disease here, and so there is no need for treatment.”

And then there are the racial riots and demonstrations which have been sweeping the US the last two weeks (the proximate cause of the sudden media about-face on the imperative of social distancing). Mercifully the violence seems to have eased this weekend, another reason for our collective sigh of relief. But the ideology justifying this hatred is in many ways diametrically opposed to a biblical world view. Since many church leaders in the US are themselves slavishly repeating the same rhetoric, I’ll have to turn to a Marxist writer in the UK to speak the truth about “whiteness-as-sin”:

Let’s be clear about what is happening here: this is an effort to establish racial collective guilt for the murderous suffocation of George Floyd. There are two problems with this approach. The first is that collective guilt on the basis of racial origin is always a wicked ideology to pursue. Whether it’s Jews being held collectively guilty of the alleged excesses of ‘rich Jews’ or blacks being collectively punished for the offences of individual black people, such racial extrapolation always leads to prejudice and suffering. There is a twisted irony in the fact that so many commentators and activists who pose as anti-racist are promoting the ideology of collective racial guilt in response to the killing of George Floyd.

Among the many evil acts airbrushed out of media coverage of the riots was the specific targeting–to their shock–of the institutions of the Los Angeles Jewish community, which were vandalized along with anti-Semitic and anti-Israel slogans. This isn’t coincidental. The tragedy of the twentieth century was ideologies that foment class and racial divisions, seize power in the name of justice, and turn out to be the greatest abusers of all–and specifically of believing Christians and Jews.

So to return to Marcel’s admonition: it’s not yet the end, but we have reason to believe that we are nearer now than we were a few months ago to the day John envisioned in his revelation nearly two millenia ago: “Then the dragon became furious with the woman [Israel] and went off to make war on the rest of her offspring, on those who keep the commandments of God and hold to the testimony of Jesus.”

What should we then do? Turn from fear. Love our neighbors. Stand with Israel.

I’ll only include two pictures in this letter tonight. Here’s precious Ziad from Gaza, repeatedly resuscitated last week by doctors in Israel, well enough to wave to our coworker Georgia from his hospital bed this afternoon! 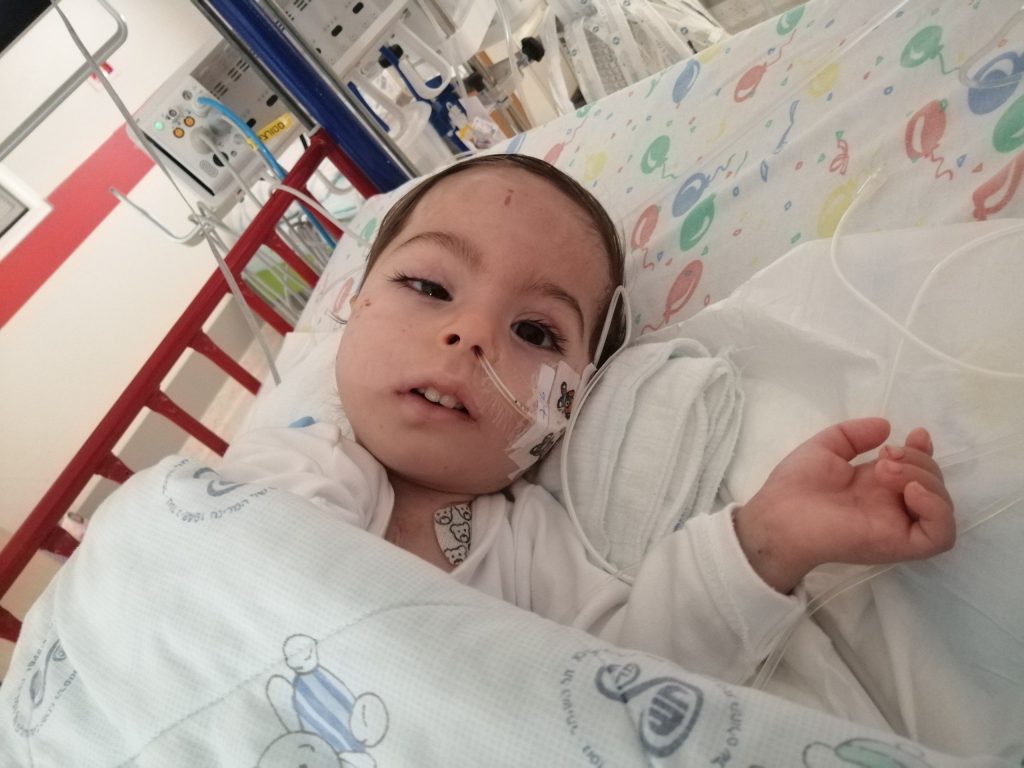 And tomorrow we’re expecting newborn Ahmed to be discharged from the Sheba Medical Center after his life-saving heart surgery, and together with two other Gaza babies to join us for a week of close nursing observation by Colin at our Jerusalem guesthouse: 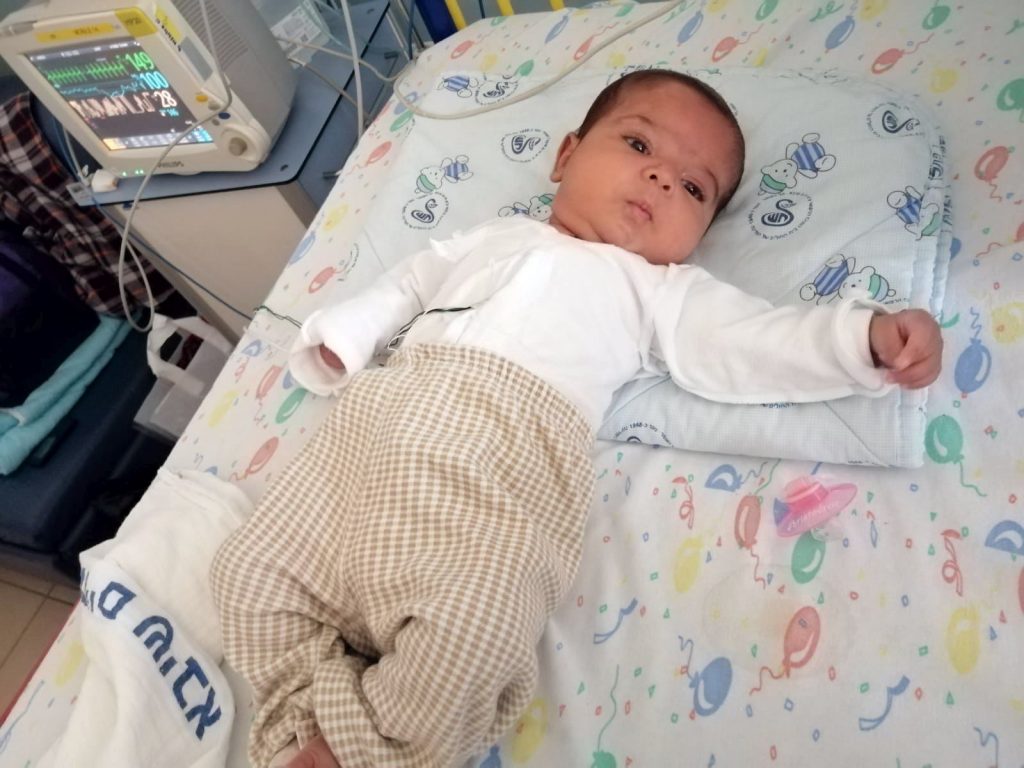 The coronavirus quarantine in Gaza is giving us this new and unexpected chance to love on these families until their children are well enough to go back to lockdown in Gaza.

So times of crisis are also times of great opportunity. Let’s do what Jesus said to do when the earth is shaken:

And there will be signs in sun and moon and stars, and on the earth distress of nations in perplexity because of the roaring of the sea and the waves,  people fainting with fear and with foreboding of what is coming on the world. For the powers of the heavens will be shaken. And then they will see the Son of Man coming in a cloud with power and great glory. Now when these things begin to take place, straighten up and raise your heads, because your redemption is drawing near.