Last week our community somehow got free for a full day (thank you Amar, Lindsay and River for watching over the recovering children and their escorts in Jaffa), and we set out in search of first century Jerusalem: 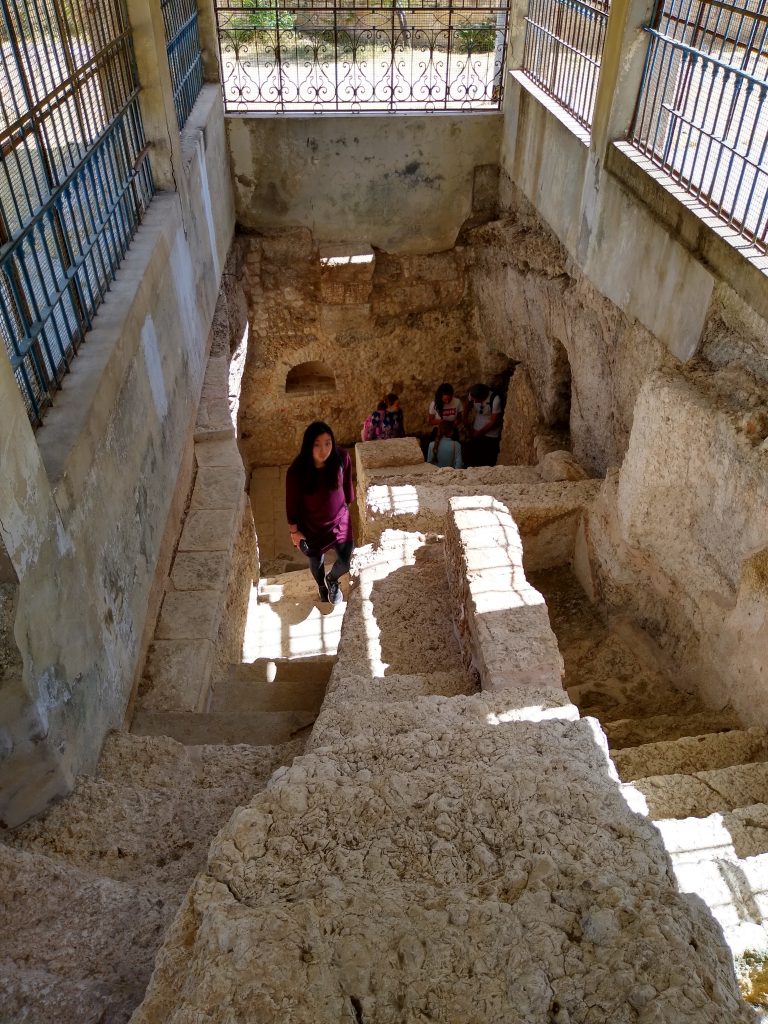 Yes, by God’s grace we were allowed by the Greek Orthodox caretaker to enter the excavated synagogue on Mount Zion, which may have been built and used by the first community of believers, birthed on Pentecost at the nearby Upper Room. And as the prominent mikveh in the bottom right of the photo suggests, this was entirely a Jewish movement which soon numbered in the tens of thousands and included many priests zealous for the Torah.

By the time of the Jerusalem Council in Acts 15 (which finally allowed Gentiles into the movement without requiring circumcision and commitment to all the Torah commandments), James the brother of Jesus had emerged as the undisputed leader. A fascinating early account claims that Peter, the other James, and John–who we see arguing over leadership privileges in the gospels–were so transformed by the Holy Spirit that they all insisted on stepping back and asking Jesus’ brother to take the lead.

All Jerusalem recognized this James as a devout man of God, according to multiple sources. Like John the Baptist he was a lifelong Nazarite, nicknamed “Camel Knees” since he spent so much time kneeling in the temple and calling out for the salvation of his people. When the religious establishment finally pleaded with him to restrain the masses of Jews who were proclaiming Jesus as the Messiah, James instead gave the same bold Son of Man testimony which led to the deaths of Jesus and Stephen: “Messiah himself sits in heaven at the right hand of the Great Power, and shall come on the clouds of heaven.”

James was then thrown down from the pinnacle of the temple, and when found still to be alive beaten to death with a fuller’s club: 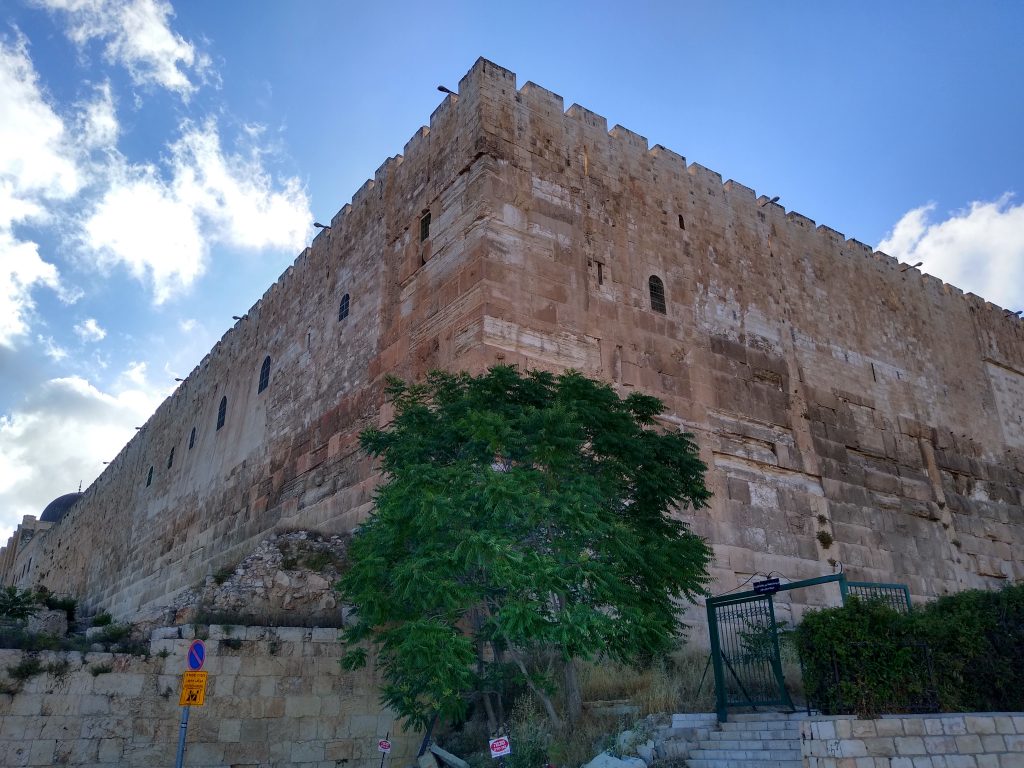 This took place on the eve of the Roman destruction of Jerusalem and the temple in 70 AD, and many in the city reportedly linked this disaster with judgment for the blood of this righteous man. What a gift that we have a letter from this James in our New Testaments!

North of the existing Old City we visited remnants of the Third Wall, through which the Romans broke into first-century Jerusalem. In stunning juxtaposition there is a memorial alongside to the Israeli forces who broke back into the city in the twentieth century, when the words of Jesus as recorded in Luke’s gospel may have finally been fulfilled: “Jerusalem will be trampled underfoot by the Gentiles, until the times of the Gentiles are fulfilled.”

Not far away we were also allowed to enter the newly-reopened Tomb of the Kings, a massive first-century burial complex in which one tradition reports that Nicodemus was buried. This member of the Sanhedrin, who visited Jesus secretly by night as we learn in John’s gospel, later used his wealth and influence to lay up vast stores of grain to support the people of Jerusalem in advance of the Roman siege. Jewish zealots are said to have burned it all in order to force the people through hunger to leave the city and confront the Romans in battle. 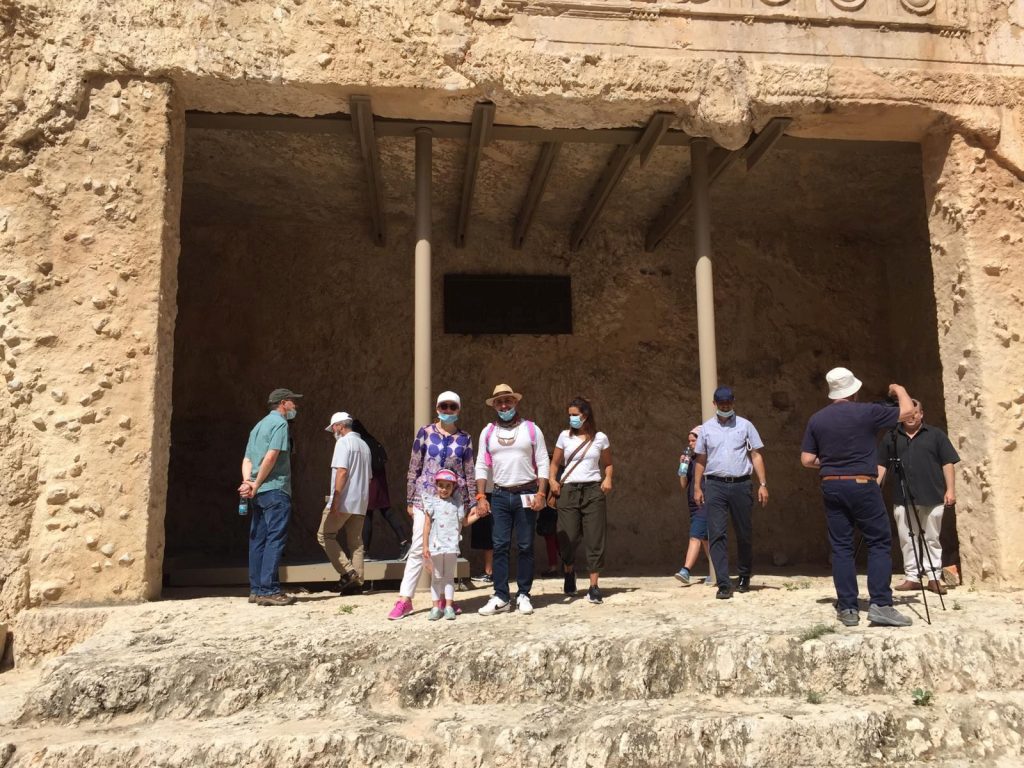 Also believed buried here was Queen Heleni from Erbil, a Kurdish convert who moved to Jerusalem in 30 AD in the thick of the Jesus events and became a great support to the Jewish people. And there is even a claim that the great rabbi Gamaliel, who presciently counseled the religious leaders not to oppose the Jesus movement lest “it be of God,” was laid to rest in this same spot. Could all these figures have been joined together in life and death by a shared faith in Jesus the Messiah?

But for me the highlight of our expedition was going into the vast Muslim cemetery on the “Skull Hill” which is above the Garden Tomb. This is a sensitive area but God has given us relationships and favor there through the burial of children who have not survived their heart surgeries in Israel. From the top we can see an otherwise hidden topographical truth: this long ridge, hidden in the bustle of the city, is actually the direct continuation of Mount Moriah, on which the biblical temples were built: 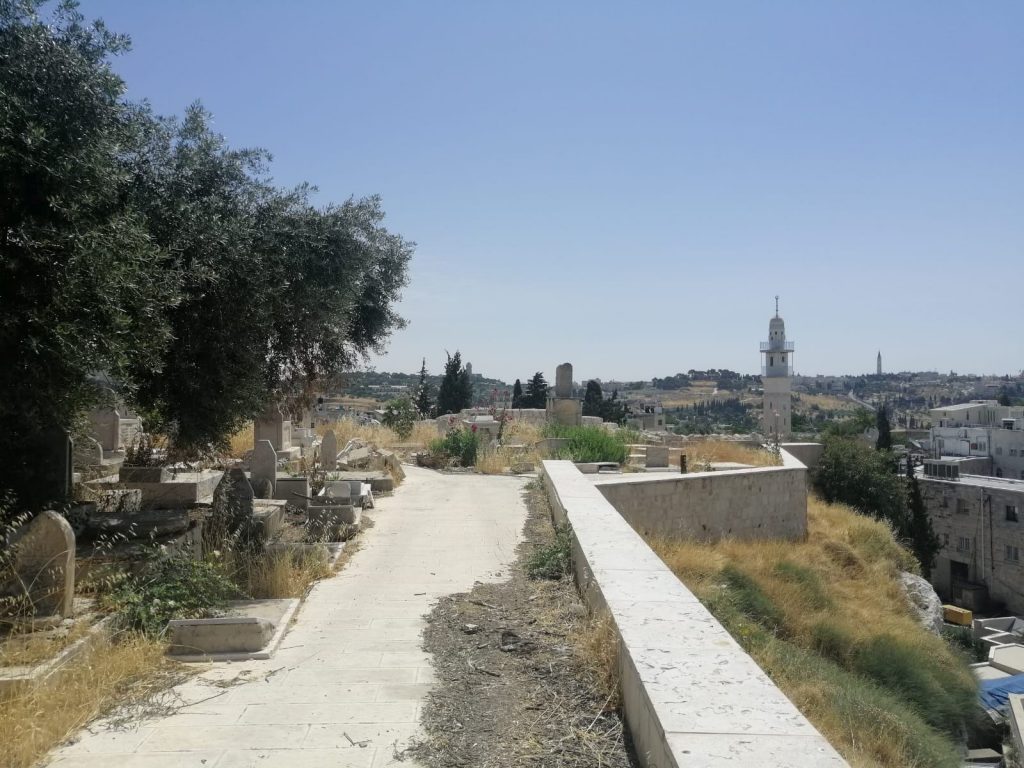 This means that Abraham’s ancient prophecy at the binding of Isaac–“on this mount the LORD will provide”–may have been fulfilled not just through the centuries of temple sacrifices, but came to its awesome completion when Messiah, the only son, finally gave his life here, on the eve of the temple’s destruction.

How exciting it is to piece together these events of the first century. And even more so because of the impact it can have on our ministry now in the twenty-first century. This early Jesus movement is far, far closer to the culture of our Muslim and Jewish neighbors than is Western Christianity. Let’s pray that Jerusalem’s ancient past will be used by God to throw new light on its glorious future. Thank you Lord for choosing us to live in these days!

Turning now to the present, Alena shares that another precious little one from Gaza was buried atop Skull Hill this week:

Most of Thursday, Shevet Gaza coordinators Amar and his father Yousef were working tirelessly to bring a little nine-day-old baby girl from Gaza to Israel. Her name is Habiba. She was diagnosed with dextro-transpostion of the great arteries, one of the most urgent Gaza cases in some time.

During the ambulance trip to Sheba Medical Center, Habiba started to deteriorate, and needed to be brought urgently to the first hospital outside of the Gaza border. They stopped at a hospital in Ashkelon, where the pediatric cardiac staff treated her until they deemed her stable enough to transport the rest of the way to Sheba Medical.

Habiba and her mother arrived at Sheba and were brought to the neonatal ICU, but within a few hours this beautiful nine day-old-baby passed away.

Today Colin and I met her mother right outside the doors of the Sheba infant ward. As we received this woman who seemed to bear the weight of the world on her shoulders, it struck both of us that all around us were families wheeling their newborns out of the ward and extended families coming to meet their grandchildren for the first time.

Habiba’s mum’s eyes were clouded with disbelief. Nine days of life and now no more. After obtaining the necessary papers, we drove to the morgue to bring her body back to Gaza. She was in a blanket inside a box small enough to hold shoes.

Amar arranged for her to be buried in Jerusalem. Yousef met us there to bring her mother to a cemetery in East Jerusalem. The burial was only a few minutes before we set off for Gaza. The name Habiba means beloved, and she truly was her mother’s beloved first and only daughter. 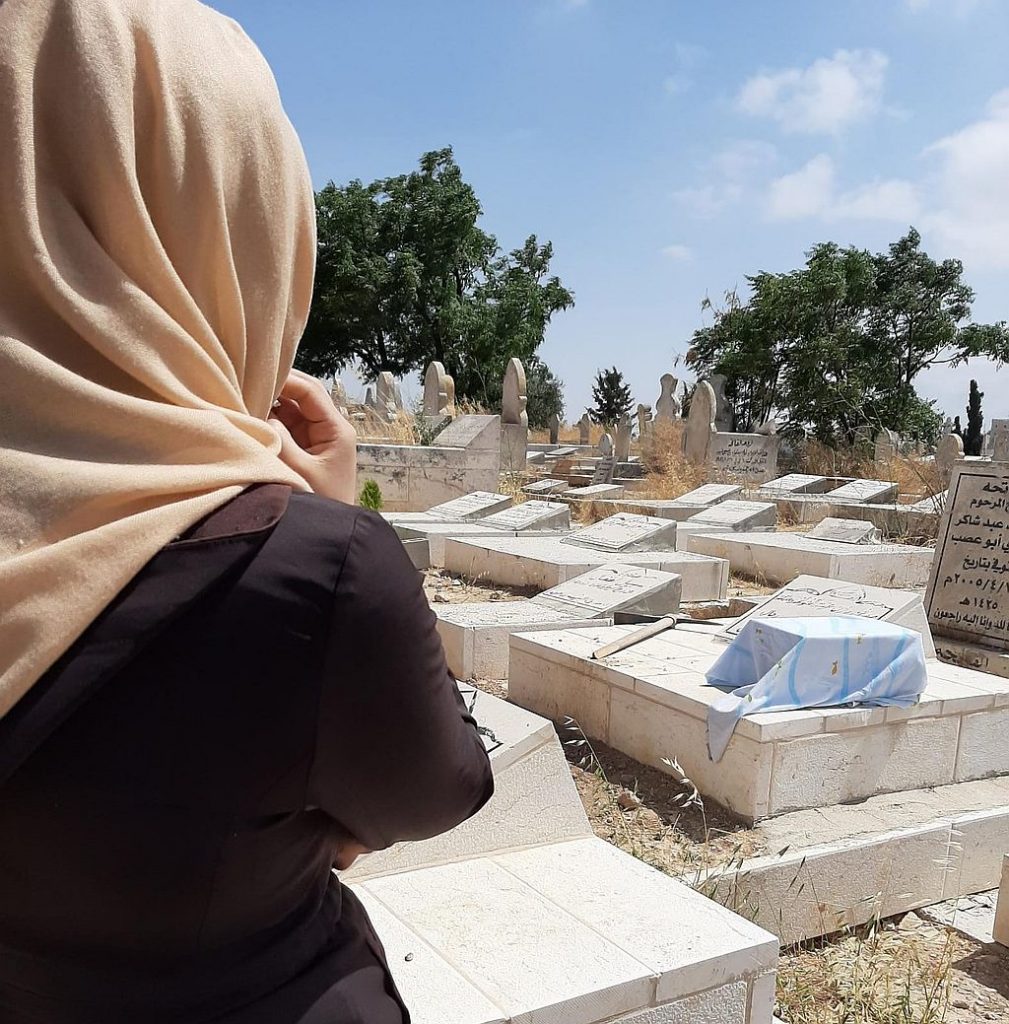 As Habiba’s mother returns to Gaza, she faces what might be a three-week quarantine. She will be alone in a designated room; we don’t know if her family will be allowed to come to her, and I can’t think of something worse than being alone after watching your baby die.

Please pray for her and for the authorities which decide the quarantine, if they may be stirred by mercy to shorten her quarantine term or make some allowances or forego it all together. Whatever happens, Lord, we pray you would be with her. May the hope of the resurrection be hers through our Messiah. For the words that the angels at the tomb of Jesus spoke to the women, those words are for Habiba as well. Though her body lies in Jerusalem, “she is not there, she has risen.”

And Claudia shares tonight that another newborn girl from Gaza is ready to “fly away soon.” Aya was rushed to Hadassah Hospital in Jerusalem on Monday for emergency life-saving heart surgery, and is doing so well she is now out of ICU and following us with her eyes: 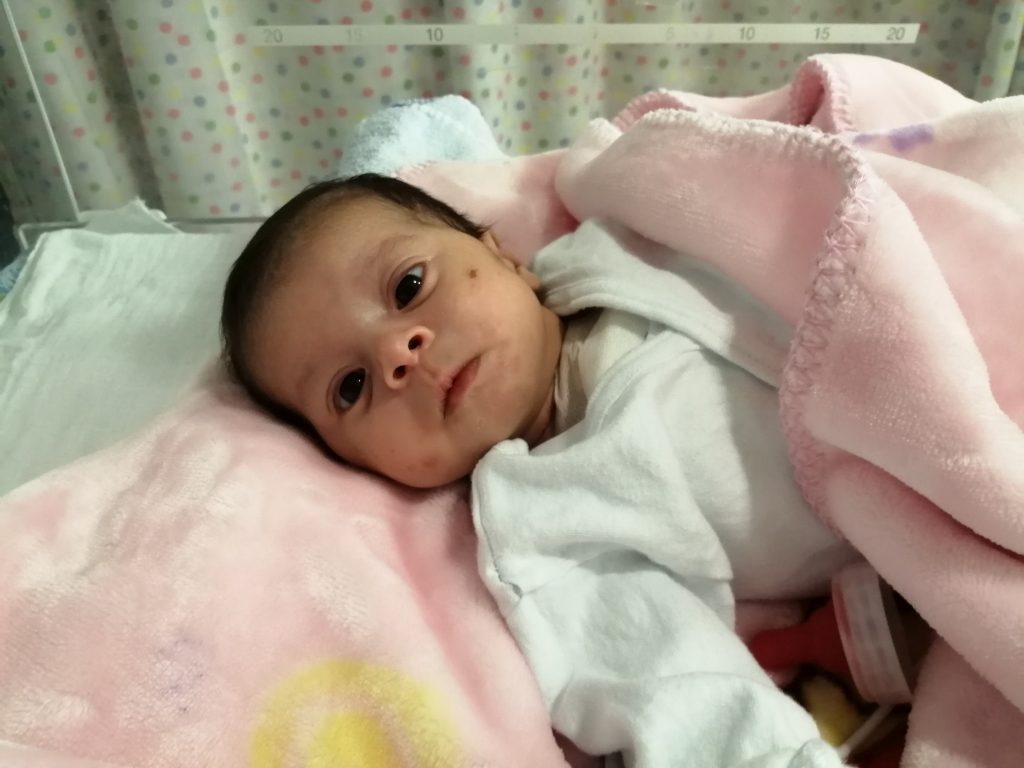 Just today medical reports for two more emergency newborns have reached us from Gaza; we pray the Father will also open a way for Salma and Anwar to come to Israel tomorrow. They have no other hope to live. We thank you Father for every day, every opportunity we are given to love your little sheep in Jesus’ name.

So friends let’s reflect on, and reflect to others, the love of the Father as we go forward. Today is Father’s Day in the US, and I’d like to encourage you to listen to a moving message on fatherhood from Ken Terry, pastor of our long-time board member Hank Nagle. He gave this word today in the mountains of California, even as his own father lies dying in hospice (skip ahead to the 20:00 mark): 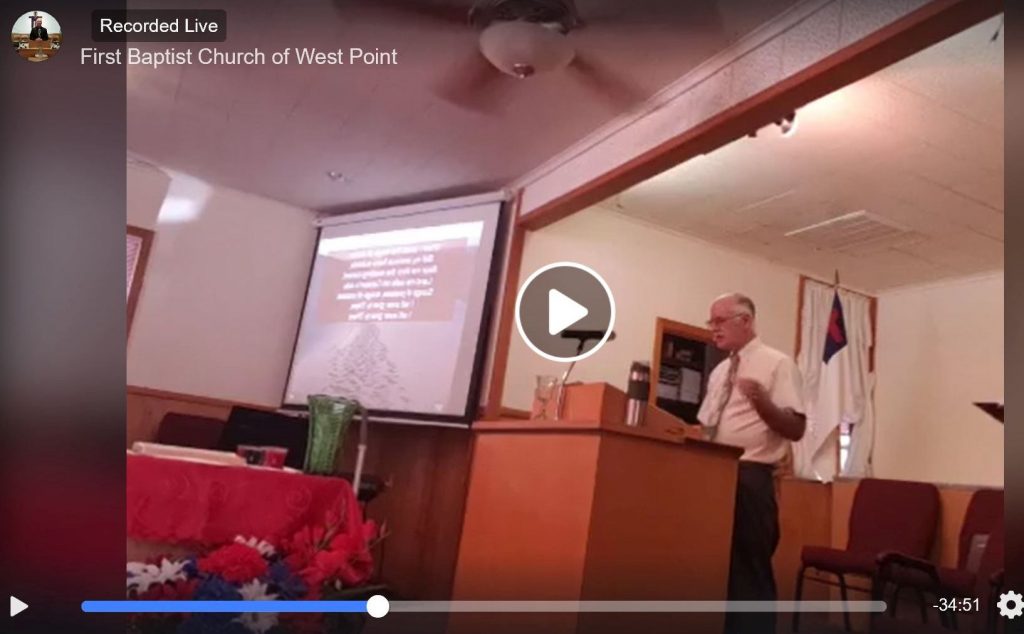 “Behold how good and how pleasant it is when fathers and children live together in unity.”