As we continue through Genesis in our morning meetings, an excerpt from C.S. Lewis’ Till We Have Faces has summarized a key plot theme of the book thus far:

“The sweetest thing in all my life has been the longing–to reach the Mountain, to find the place where all the beauty came from…Do you think it meant nothing, all the longing? The longing for home?”

The vestige of Eden which stands almost stubbornly over and against the brutal reality of humanity is an incredibly poignant theme the Bible develops until its final book. C.S. Lewis writes elsewhere about the longing, the desire for something beyond what any experience in this world can give us, and how we would not be created with desires unless satisfaction of those desires exist. We hunger because we were created to consume food, we thirst because there is such a thing as water, and so it follows that, “…if I find in myself a desire which no experience in this world can satisfy, the most probable explanation is that I was made for another world.”

But even if Eden is our true home, when Adam and Eve were exiled the path was blocked by two flaming swords and the Tree of Life, the divine presence, is untouchable. The story of the Bible then is how we will get back. When God curses the serpent, he states that there will be one to come who will crush your head, and in the pages of Matthew, Mark, Luke, and John we find out who this long-awaited champion of our undeserving race will be, and how God has made a way for us to once again enter Eden. This Jesus who “suffered outside the gate in order to sanctify the people through his own blood,” took the swords which blocked the path to life and absorbed death in himself, once for all. He was crucified outside the old city of Jerusalem, thereby making it possible that we could come into the new city, the new Eden, the new Jerusalem. It will be like finally seeing face to face what you have only seen through a dim mirror, because even before entering the new Eden we will have known, in the deepest sense of the term, the essence of heaven, which is God.

The longing for home is visible in high definition this week. I hoped to write today in celebration that the families were flying home this Monday. They were extremely hopeful as the airport in Kurdistan is due to open on August first, and there was an airline that had a scheduled flight for two days after: 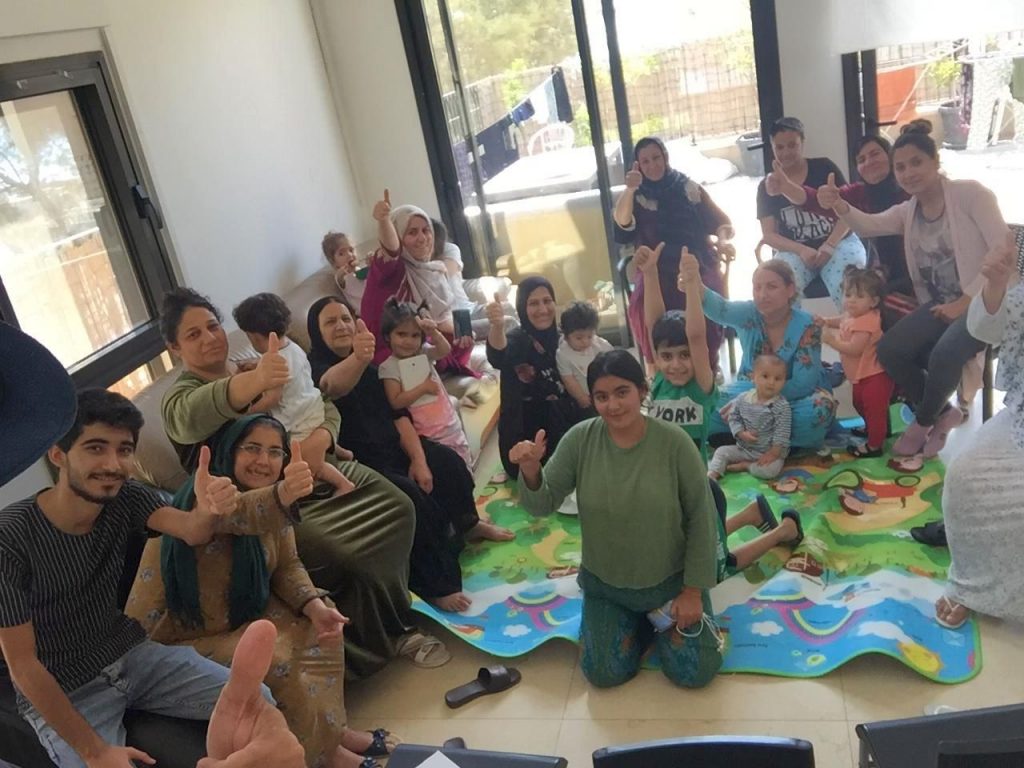 But this morning the flight, which everyone had set their hope on, was cancelled. That makes three times an opportunity to fly home has been postponed. The families took the news with varying degrees of frustration and sadness, but there is also a sense that a flight home is not far off with the airport opening two days later, and still possible flights next week. Please keep praying for them as they anticipate another flight home.

I think there is a tendency to want to rationalize everything, we want to know why events play out the way they do, and the families are struggling with that now. The ‘senselessness’ of waiting for so long indefinitely is gnawingly painful, yet our perception of things is only based on the limited range our circumstances allow. We can only humbly pray and bring our petitions before the Lord. Even, and maybe especially, when our scope of rationale ends the God of the Bible bids us to wholly lean on and trust in him. Thank you for bearing with us in bringing this petition to God and keeping the Kurdish families in your prayers.

Please also pray for ten-month-old Jalal from Gaza. Bouts of sepsis in the past prevented him from receiving surgery, but thank God that he was able to have his Glenn operation yesterday, and today was successfully weaned from mechanical ventilation: 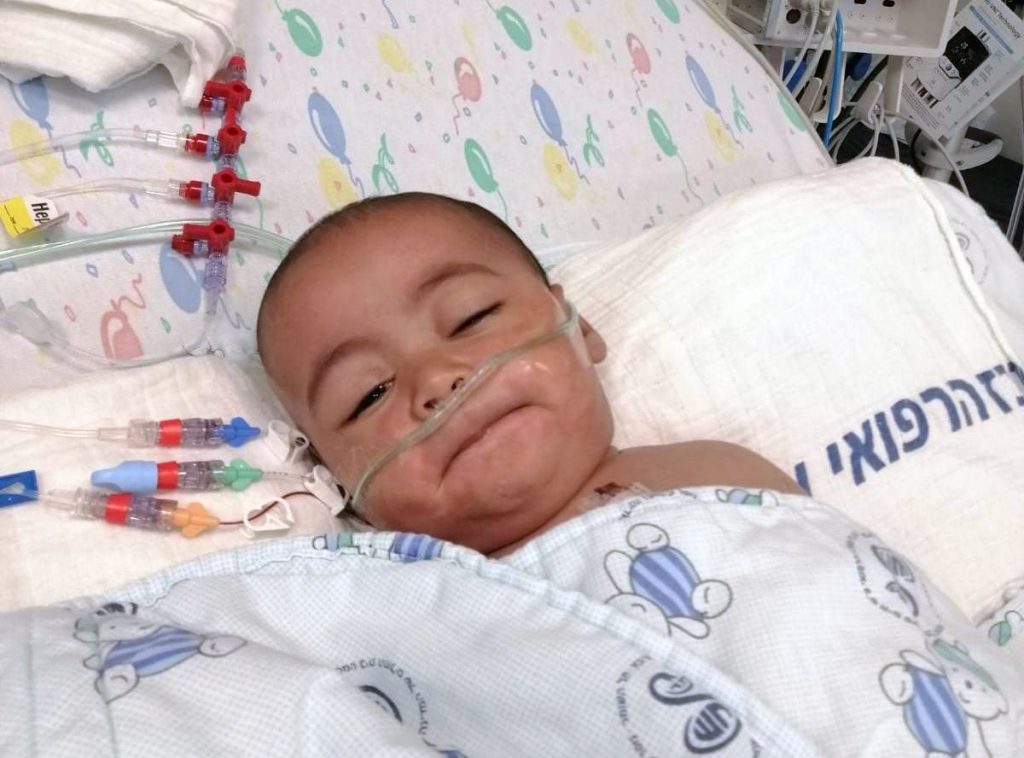 Nicolle, who is a new community member, was able to spend the majority of the surgery with his mother. She bought Jalal’s mother food during the wait, encouraging her through Google translate, and sometimes just silently praying for Jalal and for his mum, that God would speak to her and be her strength and comfort. Twice a doctor came out to say that the surgery was done and the result was very good; Jalal’s mum was greatly relieved at the news. Please pray that his history of sepsis would not complicate his recovery, and his mum would continue to be at peace and with much joy over her son.

Beautiful Ghada from Jerusalem also had surgery yesterday to fix the coarctation of her aorta. She is not even three weeks old, and her parents’ first child; both her mum and her dad are able to be at the hospital, so for the surgery yesterday they were together as they waited for their baby to come through the operation, which she did successfully thank God: 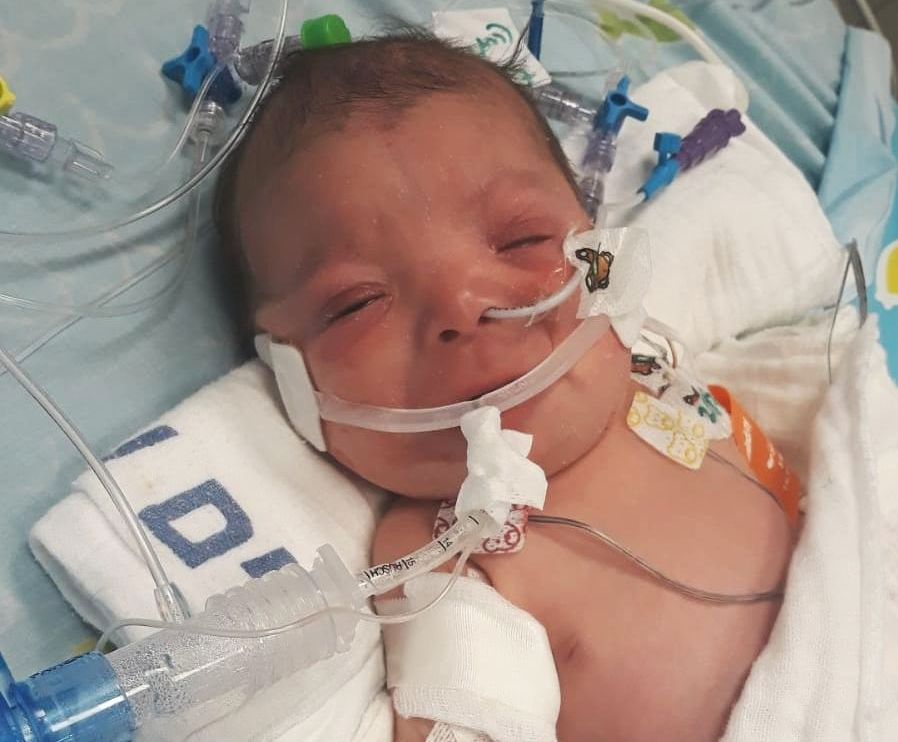 The parents were both so kind, and I was surprised how young they were when I met them, but it was fun to hear a little bit of their story of how they got married. I often am really in awe of the mothers who come so shortly after giving birth. To say it is a distressing situation to have your baby be taken into the ICU after birth doesn’t cover how the mothers must feel. But Ghada’s mum and the other mothers as well are so strong in their love and commitment to their children. Like Jalal, Ghada also has a history of sepsis, so please pray that it does not come back as she is in a fragile post-operative state.

Baby Saif from Gaza had the third surgery of the day yesterday at Sheba, a procedure on his diaphragm that will allow him to breathe better. For most of his short life he has been intubated, but we pray that this procedure would aid in his ability to breathe efficiently on his own: 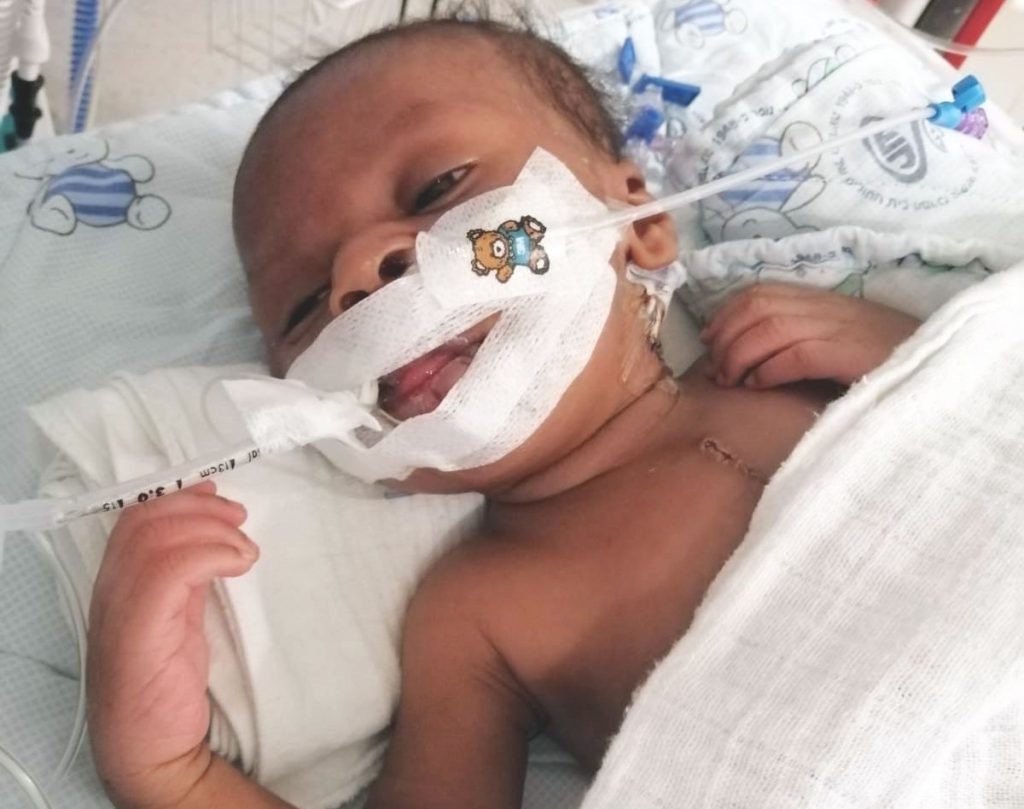 As Nicolle and I sat with his mum and a few of the other mothers whose children were in the ICU, they were joking and laughing. If this is the only picture you had of Saif’s mother, you wouldn’t know her baby was in the Intensive Care Unit. But one of the other women said, “We laugh in the day and cry in the night.” She went on to add, “But Saif’s mother comes to be with me when I cry and she makes me smile.” Lord God please come and wipe away the tears of these women, and be the strength of Saif’s mother as she is a pillar of support for others in addition to caring for her son.

The woman who said this is the mother of Taim, a child who did not come to the hospital through Shevet that Georgia wrote about last week. Taim for some time he has been on the ECMO machine, which supports a critically-ill heart while it is unable to function on its own. Please pray for this little one, and for his mother, whose grief is palpable. As Georgia said last week, the Lord is near to the brokenhearted. May the God of the resurrection bring new life to Taim.

Our little Soso had her post-surgical echo this Monday at Hadassah Hospital in Jerusalem, after staying for two weeks with us in our Jerusalem guesthouse. Soso was joyfully cleared to go back to Gaza: 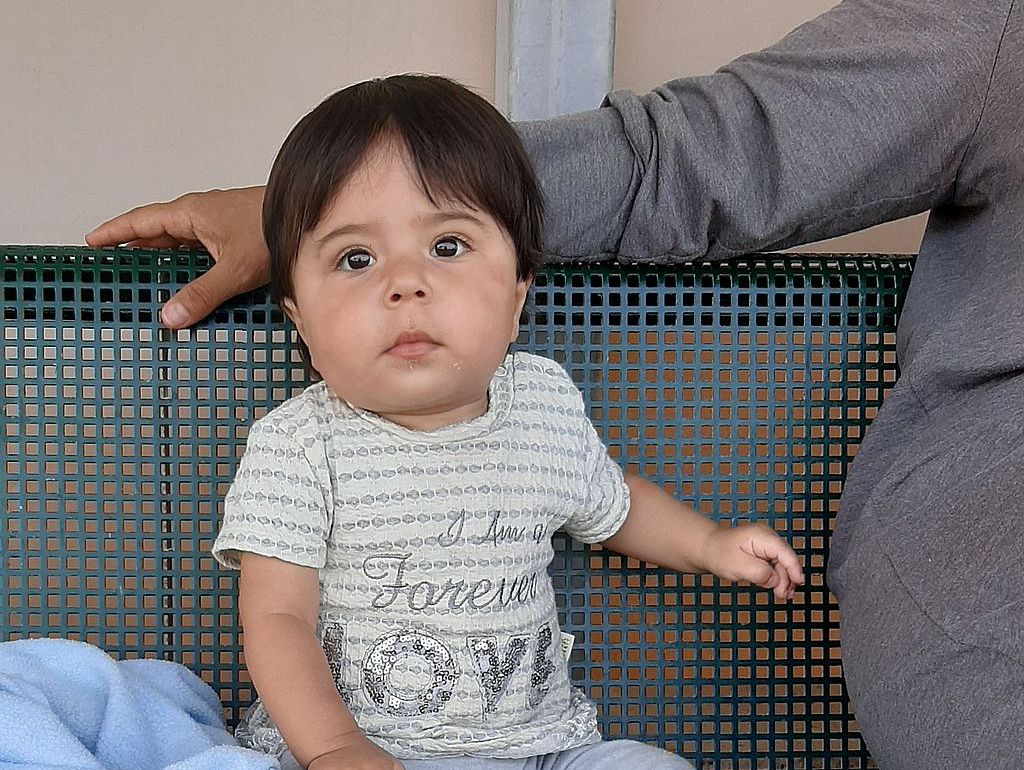 Baby Zaed was discharged the day before from Hadassah after his surgery last week, so after spending the night at the Jerusalem house Zaed and Soso went back together. Please prayer for the Lord’s continuing work in the lives of the children and their mothers as they go into a three week quarantine: 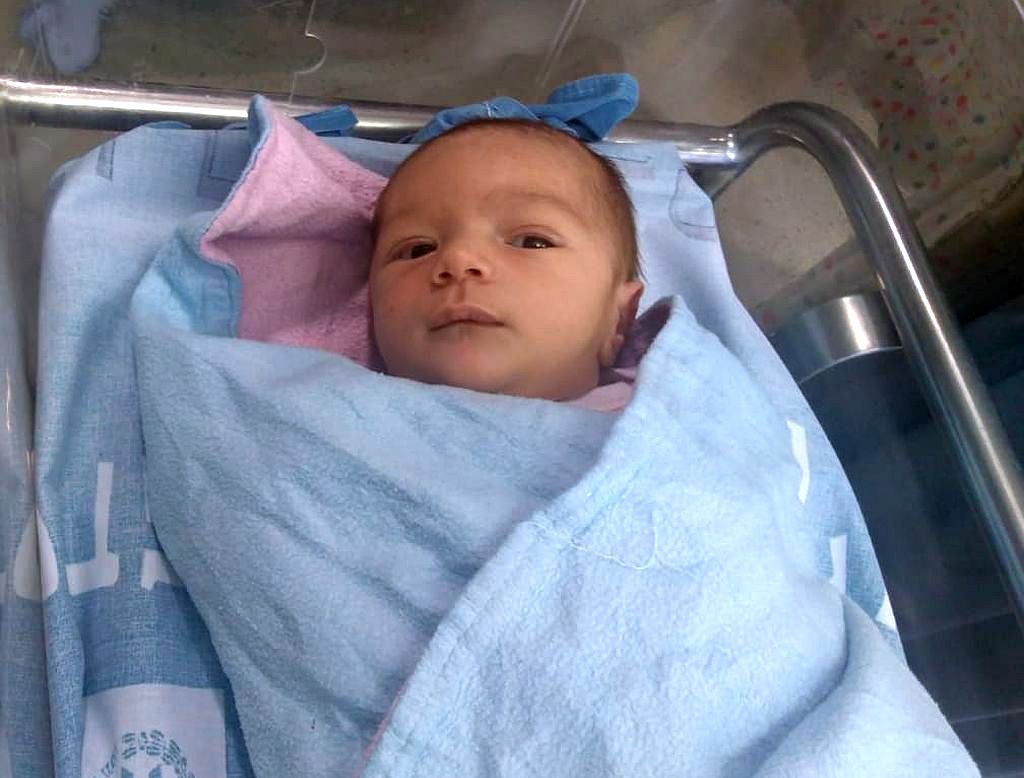 Our old friend Hassan also was discharged this week after two and a half months at Sheba. He and his aunt went back to Gaza last Thursday, after two days of Amar, Colin, Georgia, and Jonathan working to secure all the medicines he would need (which was ten!). Not all medications are available in Gaza, and because they are essential he couldn’t be discharged without a sure supply. In the end, the internal hospital pharmacy gave not only the medications we ordered, but also a large supply of the others as well! It was a wonderful surprise: 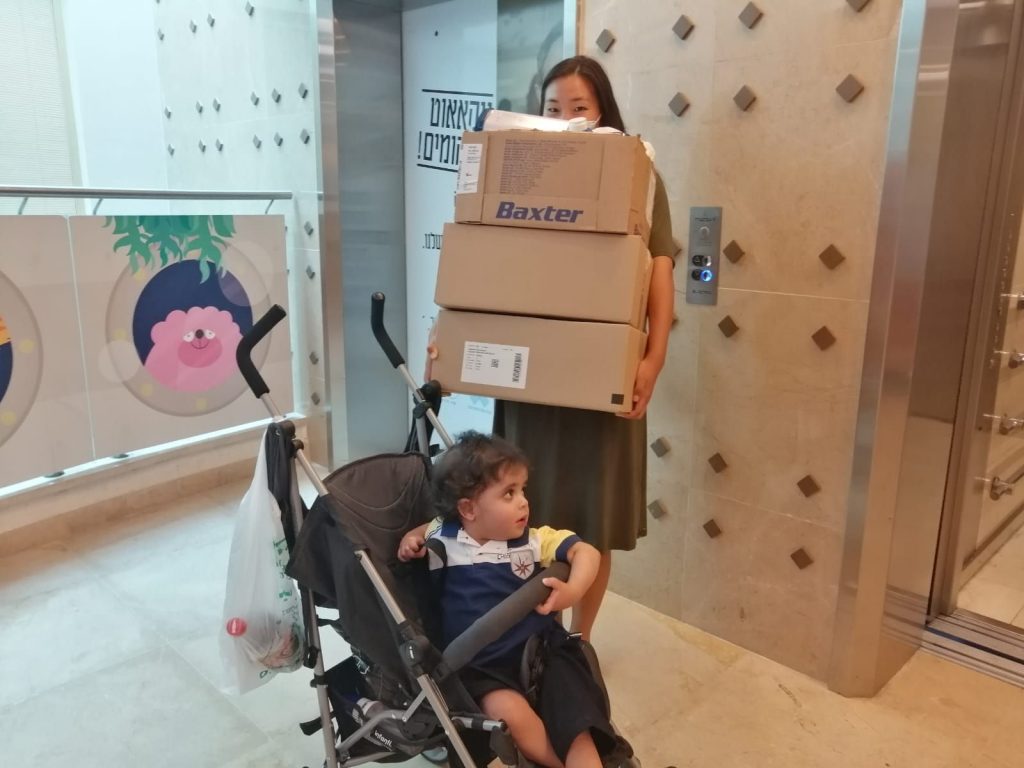 Please pray for Hassan and his aunt as they go through the three-week quarantine period; particularly that Hassan wouldn’t be exposed to any harmful virus (corona or otherwise) as his body is very complicated and has undergone so many procedures. His discharge report ran to 52 pages! Please also bless his auntie, who has given up so much to be with him during his treatments at Sheba, including missing her own son’s wedding. Now she will have time to rest, from here on out it will be Hassan’s mother who comes with him. I picture her ten years from now telling Hassan of their times together in the hospital. We love these two.

Lastly, praise God for the arrival this week of two nurses, Debi from America and Erika from Germany (who celebrated her birthday today in mandatory two-week quarantine). 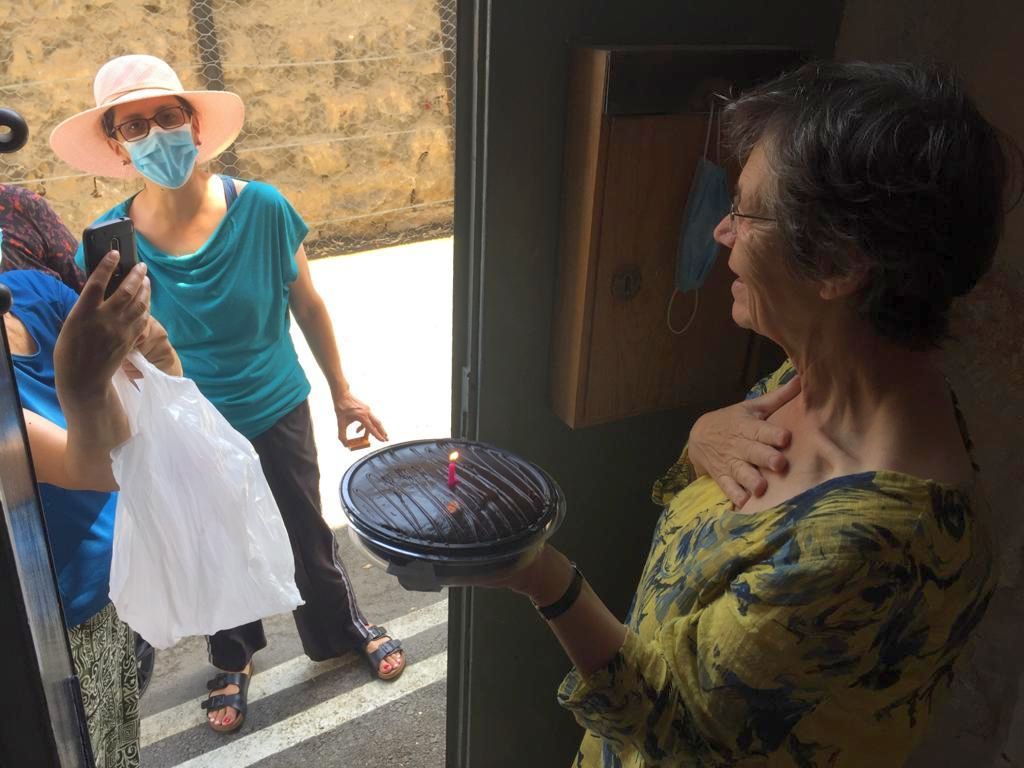 They are the first staff who have come from abroad in four months, so thank God for their safe journey and we all look forward to having them as a part of our family.

Thank you for praying for these precious lives, it is a privilege to work alongside family in the body of Messiah, with the hope of the new Eden ahead of us.