It’s been a big week for Israel, with word that the United Arab Emirates will give full recognition to the Jewish state. It’s the first Arab nation to offer peace to Israel without territorial concessions, and more Arab leaders will follow, as Robert Nicholson concludes in his essay The Era of Arab-Israel Cooperation Begins: “The dam has cracked; soon it will break.”

It’s fascinating to watch our region line up more and more along the lines of Ezekiel 38’s prophesied Iran/Turkey confederation against Israel. A generation ago the big Sunni Arab states were Israel’s sworn enemies, and Iran and Turkey were Israel’s best friends. Who (besides Ezekiel) would have foreseen just the opposite? I’ve also long wondered why the prophet singled out Libya by name as one of these enemies of Israel; now it turns out Turkey is taking over the place, just as Iran is attempting in Iraq, Syria, Yemen and Lebanon. Coincidence? We seem to live in the generation of coincidences.

Closer to home there are encouraging discussions like I heard this week around the Shabbat table at our Jerusalem guesthouse, as an Iraqi father and Gazan mother chatted in Arabic about what they’ve seen during their time with us in Israel:

I have to change to this good way of living and forgiving others. We can live like this.

Yes, after seeing this I will change myself.

Hospitality is one thing; love and loyalty and sincerity is something else.

People in our society talk about helping others, but they don’t leave their family and beautiful place and come serve here. Who does something like that?

OK, so they knew I was listening. But I’m convinced they really are impacted by the way our community members–and our Israeli medical partners–freely give up their lives to serve others. And I’m convicted this week that we’re not doing enough to get that message out here in the Middle East. Dear English-speaking friends, we go to great lengths to share with you all that is happening here. But we’re doing virtually nothing to share these same stories in Arabic and Hebrew.

And there are so many honest, open and humble hearts among our neighbors. I’d like to give you the chance this week to listen to one of them speak for a few minutes. Israel, like the US, is being torn by angry and sometimes violent demonstrations. Division and hatred is being sown for political ends. In this context a heroine arose this week in Israel, pleading with the Jewish people to understand they have to live together, and they need each other.

She is Tehila Friedman (her name means “praise”), a new Knesset member giving her first speech to the parliament. As she herself notes, these are usually occasions to deliver unremarkable and ignored platitudes. But she chose instead to speak from her heart, and her speech has been shared over a million times (in a nation of ten million persons): 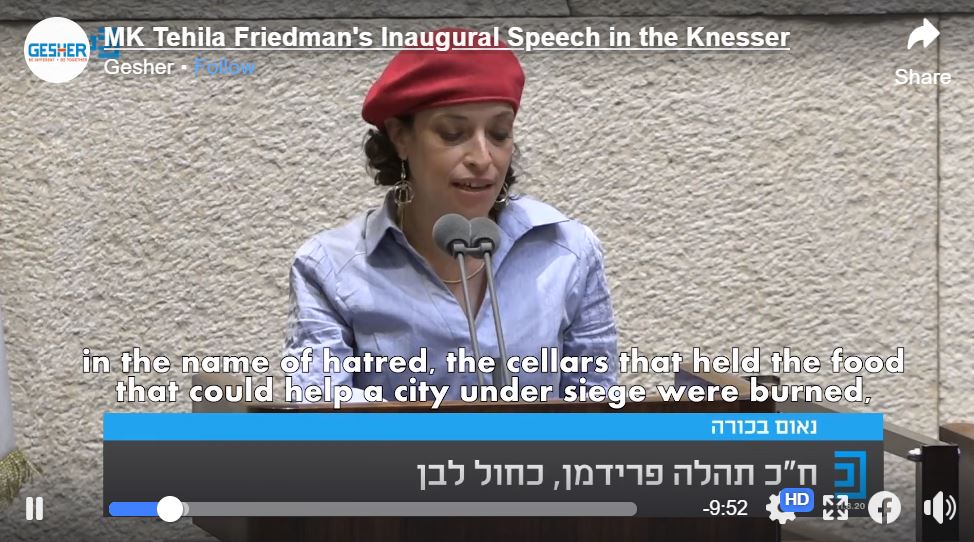 What really struck home for me is the example she chose of how baseless hatred can destroy a people. She focused on a story from the Talmud involving Nicodemus, almost certainly the same figure we meet in the pages of John’s gospel; the secret nightime visitor to Jesus (chapter 3), later his defender in the Sanhedrin (chapter 7), finally removing his body from the cross and laying him in the tomb (chapter 19).

This same Nicodemus, called Nakdimon in the Talmud, helped lay up vast stores of grain in order to sustain the population before the Roman siege of Jerusalem in 70 AD. But the Zealots, in order to provoke the people to fight, chose to burn their own grain supplies and leave Jerusalem without food. Eventually, the historian Josephus records, some among the people were reduced to eating their own children, just as Moses had forewarned.

The prophet Zechariah speaks of the day that the residents of Jerusalem will look on he whom they have pierced, and mourn for him. A step toward that recognition is realizing that a great figure of first century Jewish history became a champion of the Messiah. The great Yiddish writer Sholem Asch grasped this, and made Nicodemus a central figure in his epic novel The Nazarene published 81 years ago.

Asch was largely cast out of polite Jewish society as a result, and ended up living the last few years of his life in a little house just a mile south of our Jaffa community. Let’s take encouragement tonight from words he spoke as the controversy raged about him:

“I couldn’t help writing on Jesus. Since I first met Him, He has held my mind and heart. I grew up, you know, on the border of Poland and Russia, which wasn’t exactly the finest place in the world for a Jew to sit down and write a life of Jesus Christ. Yet even through those years, the hope of doing just that fascinated me. I floundered a bit, at first; I was seeking that something for which so many of us search-that surety, that faith, that spiritual content in my living which would bring me peace and through which I might help bring some peace to others. I found it in The Nazarene.

“For Jesus Christ, to me, is the outstanding personality of all time, all history…Everything He ever said or did has value for us today, and that is something you can say of no other man, alive or dead. No other teacher-Jewish, Christian, Buddhist, Mohammedan-is still a teacher whose teaching is such a guidepost for the world we live in…every act and word of Jesus has value for all of us, wherever we are. He became the Light of the World. Why shouldn’t I, a Jew, be proud of that?

“No other religious leader, either, has ever become so personal a part of people as The Nazarene. When you understand Jesus, you understand that he came to save you, to come into your personality. It isn’t just a case of a misty, uncertain relationship between a worshipper and an unseen God; that is abstract; Jesus is personal.

“I suppose the final inspiration to write, the insistence that I write, came to me in Palestine. I saw that I could never write about Jesus until I went to his homeland, So I went, in 1907. Then the story really came alive. The whole landscape of the Holy Land held His footprints; every bush and tree and stone was afire with Christ. I made more pilgrimages to Palestine, later, but if you want a date, it was in 1908 that the real writing began.

“The beginning was tedious and hard. No man can write swiftly and easily of Jesus Christ, for no man can generalize about Him. There is no easy middle-ground to stroll upon. You either accept Him as Christ, or you reject Him. You don’t ‘analyze’ Him.