I was surprised to learn a few weeks ago that Israel is among a handful of nations with a “Good Samaritan law” that requires passersby to stop and give aid to an injured person. How beautiful that the command of Jesus to “go and do likewise” has been enshrined in Israeli law! O for the blessed day when his commands will be law over the whole earth.

Other nations don’t require assistance, but at least protect those who do intervene from any liability. China most recently joined this group after horrifying videos spread of a little girl and a woman left to die in the street by onlookers who were afraid of getting involved.

On a few occasions our community has been questioned by visitors who see us transporting or caring for children in ways that fall short of the protocols in their home country. Thank God for friends who regularly help us to buy essential medical equipment, and highly-experienced professionals who come to serve with us and to train us. Our standard of care is always improving. But still there are life-and-death situations in Iraq or Gaza that require us to choose the best option from those that are at hand. To do nothing means to let a child die.

We’re helped in this by the faith of the mostly-Muslim people that we serve. Their conviction that what God has written, he has written, can sometimes appear to us fatalistic. But when facing the devastating death of a child they’re taught to unflinchingly give praise to God. Often they’ll quote Job: “the LORD gave, and the LORD has taken away; blessed be the name of the LORD.”

We saw it this week when tiny newborn Muhamad from Gaza died in the cath lab at Hadassah Hospital. Somehow it fell to us to break the news to his young mother, whose five previous pregnancies all ended in miscarriage. She was crushed, frozen with grief; but before leaving for Gaza she found the grace to stop and thank us. 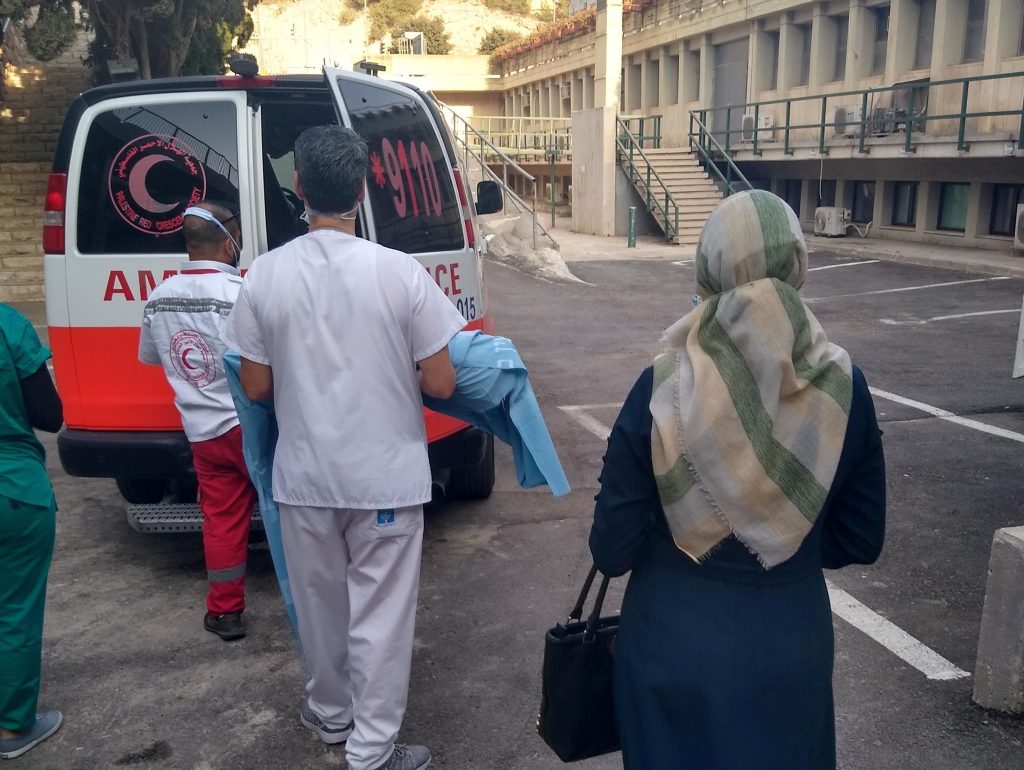 Only once in 25 years have I heard of a Muslim family suing an Israeli hospital that was trying to help them. A Jordanian toddler had a bad reaction to a medication and lost circulation to his limbs, which eventually had to be amputated. I thought of him this evening when reading Alena’s account of the pitched battle that doctors at the Sheba Medical Center are fighting for the life of little Zakaria from Gaza: 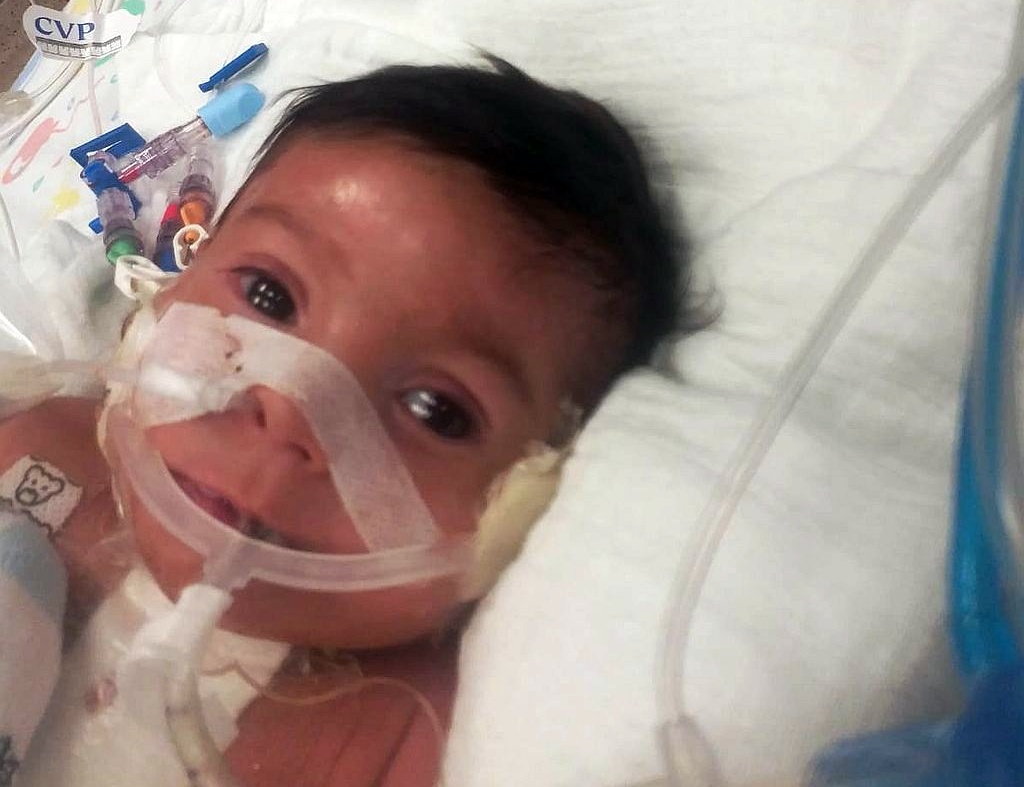 Zakaria’s crib from the ICU was wheeled into the operating room, his mother wept as she trailed behind him. Before he went beyond the sliding doors to the theater itself, one of the nurses said to his mother that she could kiss him. His mother sobbed, said his name with a pained voice, and bent her head to his to kiss him, his hands, his feet. I went to her and brought her to sit down, as we settled in for whatever the next hours would bring.

One of the nurses who came out from the OR, double-checked with me that I knew the gravity of the situation, that it was extremely precarious and Zakaria might not make it, and to make sure Zakaria’s mom understood this. The statistics of coming off of ECMO [a device which oxygenates blood allowing heart and lungs to rest] are only 50/50, and this I kept in mind. After a while Zakaria’s mother and I conversed somewhat, then a lot. Initially I was stressed about the logistics: what happens if he doesn’t make it, I’ll have to translate that to her, what about bringing her back to the border, what paperwork must I get for him to go back, and other thoughts like this.

But within a few minutes, it’s not that those concerns disappeared, rather the Spirit worked in me to engage with this woman sitting beside me. Somehow my attention, though scattered before, was now fully on her and how to support her. I have no other explanation of how the time passed, other than we spent it by sharing so much of our lives. She showed me pictures and told stories of her life in Gaza with her other kids. She is a master chef and loves to cook and makes everything from scratch. She has a teenage daughter with an incredible aptitude for interior design. They, like many Palestinian families, go on family trips to the beach, and the beach-side coffee shops. We talked about homeschooling kids or sending them to public school and many other things. She came alive when talking about her family. Her love for them radiated from her expression and words. This time made me love her more but simultaneously to dread more the possible outcome of the surgery.

So when two hours had passed, and Zakaria had been able to come off ECMO by the end of it, I was surprised and overjoyed. But I don’t think either of us were prepared for what his body looked like after the surgery. They allowed me this once into the ICU, and his mom came out of his room and asked why his hands and feet were blue. I’ve seen children with blue discoloration before, but never with extremities that are so deeply blue it looked similar to the end stages of frostbite. When I looked at him my brain didn’t comprehend what I was seeing.  We were able to inquire via an Arabic speaking nurse the reason for this, which was due to a lack of oxygen circulating to his hands and feet.

We sat together in his room for a few minutes, and I could tell she was disturbed. A lot of the hope that came from him surviving the surgery and in many ways beating the odds of getting off ECMO, now dwindled at the image of his body

Now two weeks on, he is still in critical condition. Today at the hospital, I saw his beautiful mother who was gracious and kind as always, and my heart hurt more. What she must be experiencing, I can’t imagine. Suffice it to say that even if I could, no words would grasp the breadth and width of it. But I think that at precisely the point at which words fail, that is the place where the power of prayer in its rawest and most true form, begins!

Friends, we indeed must pray for our neighbors. For healing of their broken hearts; for healing of their children. And would you remember our front-line workers who are dealing with these situations day after day. We see a lot of joys, but there are a significant number of heartbreaks. We need the boldness and comfort of the Holy Ghost if we’re to keep taking the risks and paying the price to be there for our neighbors.

We can incredibly enough add Bahrain this week to the list of Arab countries ready to make peace with their neighbor Israel, and more are expected to follow. It’s a nightmare for those other neighbors who’ve made hatred of the Jewish homeland the centerpiece of their faith. Interestingly Islamist Turkey started pointing the finger this week specifically at an alliance of evangelical Christians and Zionist Jews as their enemies.

On a similar note the Somali activist and academic Ayaan Hirsi Ali this week published a perceptive essay in the Wall Street Journal entitled “What Islamists and ‘Wokeists’ Have in Common“:

Even when I first encountered what has come to be known as “cancel culture”—in 2014 I was invited to receive an honorary degree at Brandeis University and then ungraciously disinvited—I didn’t fret too much. I was inclined to dismiss the alliance of campus leftists and Islamists as a lunatic fringe.

But the power of the illiberal elements in the American left has grown, not just on campus but in the media and many corporations. They have inculcated in a generation of students an ideology that has much more in common with the intolerant doctrines of a religious cult than with the secular political thought I studied at Holland’s Leiden University.

In the debates after 9/11, many people sought materialist explanations for the attacks. American foreign policy in the Middle East was blamed, or lack of education and employment opportunities in the Arab world. I argued that none of these could explain the motivations of the plotters and hijackers, who in any case were far from underprivileged. Their goal was religious and political: to wage jihad against their kin if they didn’t accept a literal interpretation of Islam, to denounce Arab governments as corrupt and their Western allies as infidels, and ultimately to overthrow the established order in the Middle East and establish a caliphate.

American policy makers preferred the materialist explanations, as they implied actions to solve the problem: invasion, regime change, democratization. It was unpopular to suggest that the terrorists might have unshakable immaterial convictions.

Nineteen years on, we see a similar dynamic, only this time it is within our borders. Naive observers explain this summer’s protests in terms of African-Americans’ material disadvantages. These are real, as are the (worse) socio-economic problems of the Arab world. But they aren’t the main driver of the protests, which appear to be led mainly by well-off white people.

Their ideology goes by many names: cancel culture, social justice, critical race theory, intersectionality. For simplicity, I call it all Wokeism.

I am not about to equate Wokeism and Islamism. Islamism is a militant strain of an ancient faith. Its adherents have a coherent sense of what God wants them to achieve on earth to earn rewards in the afterlife. Wokeism is in many ways a Marxist creed; it offers no hereafter. Wokeism divides society into myriad identities, whereas Islamists’ segmentation is simpler: believers and unbelievers, men and women.

There are many other differences. But consider the resemblances. The adherents of each constantly pursue ideological purity, certain of their own rectitude. Neither Islamists nor the Woke will engage in debate; both prefer indoctrination of the submissive and damnation of those who resist.

The two ideologies have distinctive rituals: Islamists shout “Allahu Akbar” and “Death to America”; the Woke chant “Black lives matter” and “I can’t breathe.” Islamists pray to Mecca; the Woke take the knee. Both like burning the American flag.

Both believe that those who refuse conversion may be harassed, or worse. Both take offense at every opportunity and seek not just apologies but concessions. Islamism inveighs against “blasphemy”; Wokeism wants to outlaw “hate speech.” Islamists use the word “Islamophobia” to silence critics; the Woke do the same with “racism.”

Islamists despise Jews; the Woke say they just hate Israel, but the anti-Semitism is pervasive. The two share a fondness for iconoclasm: statues, beware.

Both ideologies aim to tear down the existing system and replace it with utopias that always turn out to be hellish anarchies: Islamic State in Raqqa, the Capitol Hill Autonomous Zone in Seattle. Both are collectivist: Group identity trumps the individual. Both tolerate—and often glorify—violence carried out by zealots.

This Sept. 11, then, let’s dismiss the fairy stories about the enemies of a free society. Their grievances aren’t merely economic and they won’t be satisfied with jobs or entitlements. Their motivations are ideological and they will be satisfied only with power.

Slowly coming into focus then are two camps as we draw near to what looks suspiciously like the end of the age. On one hand the odd bedfellows of leftists and Islamists, united only by hatred of the other camp: the Jewish people, and those–mostly Christians–who will choose to stand by them.

Let’s end with some encouragement tonight. A glorious new version of “The Blessing” has been released, this one drawing together believers from across the Middle East, from one end of the Isaiah 19 highway in Egypt, through Israel, all the way to the other end in Armenia: 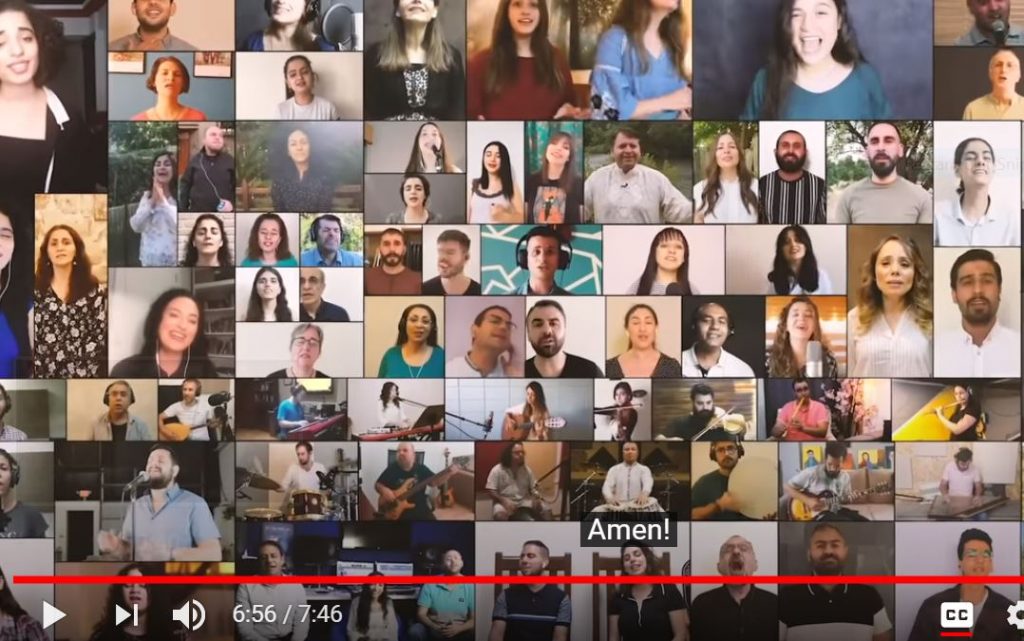