As the sun sets in a few minutes all Israel will fall still and silent for Yom Kippur, set aside by everlasting statute as the day the high priest enters the Holy of Holies and sprinkles blood on the cover atop the ark of the covenant, “that atonement may be made for the people of Israel once in the year because of all their sins.”

Today it’s a day of fasting, even for the secular. Television and radio are silent, and children ride bicycles in the highway as hardly a vehicle is moving throughout the Jewish areas. Imagine the shock when Israel was attacked on two fronts on Yom Kippur 47 years ago:

From the early morning, we began to notice strange things happening that should not have been occurring on Yom Kippur: a fighter plane flying over head; a jeep racing through the deserted streets; a soldier running holding a tallit.  All through the morning-prayer service people started to disappear; a stranger entered, a tap on the shoulder, a nod, an apology, a worried look, a quick goodbye, a jeep waiting outside.  By midday, children starting spreading the news that the Egyptians had crossed the Suez Canal — Rubbish. How was that possible? Couldn’t be.

At exactly 2 pm, about ten minutes before the end of the musuf service, for some inexplicable reason, the women in the women’s gallery suddenly rose en mass and exited the synagogue.

And only then did I hear the wailing of the siren.

On this one day of the year Israel’s borders are always closed, including the crossing from the Gaza Strip. So thank God we brought newborn Abdullah from Gaza just in time on Friday, and today on the eve of Yom Kippur doctors in the Sheba Medical Center rushed him in for emergency surgery as his oxygen levels fell into the 50’s: 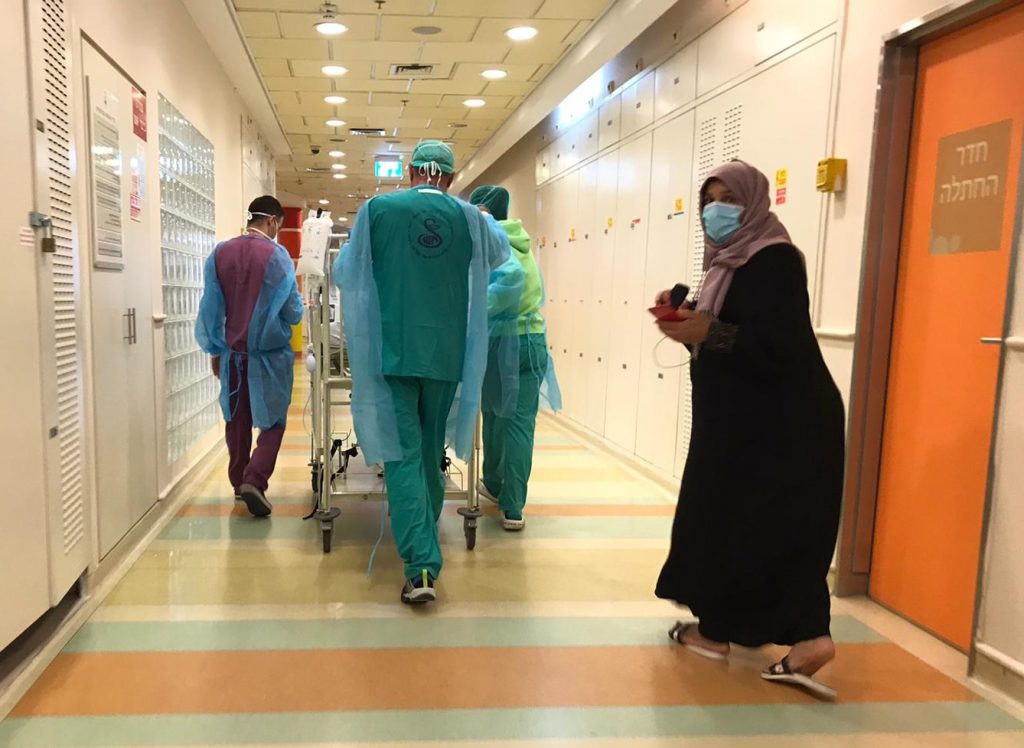 And immediately after Yom Kippur they’ll be rushing again to find a place for newborn Jomana, another child between life and death whose report we just received from the ICU in Gaza: 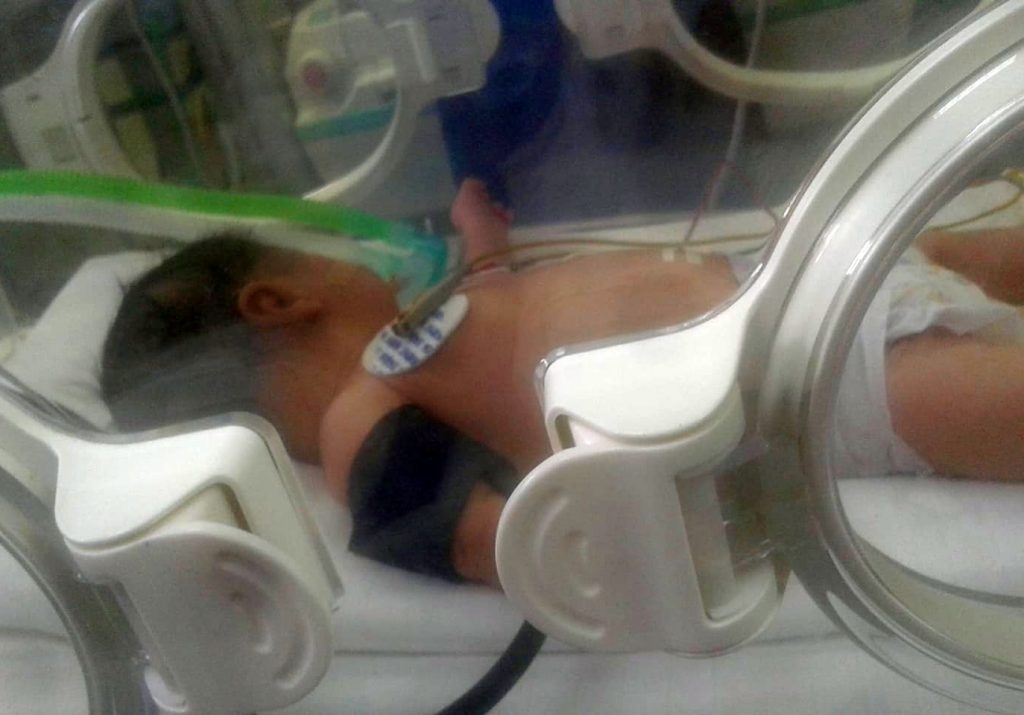 We trust that our Father who gave his son freely for our atonement will also provide freely the $7000 needed to care for each of these precious lives. (Our main partner hospital as of this month has asked us add another 15% to our contribution in light of their huge losses on these complex children, who are often hospitalized for months).

Even before Yom Kippur Israel has been under a complete lockdown for the past two days, as hospitals are filling beyond capacity with coronavirus patients. The one lockdown exception has been raucous political demonstrations, which shattered the silence again last night here in Jerusalem as some 16,000 converged on the prime minister’s residence, without respect for social distancing. The religious in Israel, as in other countries, are increasingly asking why their communal prayer is banned but these protests are excepted.

Their suspicion seems increasingly justified that they are encountering a worldview or spirit which looks at the practice of faith as at best non-essential. Thursday former Knesset member Yehuda Glick, now in the running for Israel’s presidency, was fined together with his wife for breaking lockdown restrictions in order to blow a shofar outside the Temple Mount–“officers ignored the couple’s explanations that they were protesting.”

A unique wrinkle in Israel is the feeling by many that the police and legal establishment are allying with the media and secular demonstrators to bring down the government. A kippa-wearing political analyst for one of the main news channels caused a sensation a few weeks ago when he revealed that police portrayed a Bedouin man they mistakenly killed as a terrorist, rather than allowing damage to the reputation of justice officials who are pursuing the prime minister.

What really struck me was the reporter’s damning final comment: “This is Sodom.” It must be a time-honored Hebrew idiom, because it is so politically incorrect I can’t imagine it being said anywhere else. Yet it rings true. The profane and increasingly violent nature of political conflict, especially in the US, are signs that we are entering into an evil and adulterous generation. Many look the other way, and excuses are made: “Of course I’m opposed to all violence, but….”

That “but” will open the door to the apocalypse. During the French Revolution a small group of agitators dishonestly manipulated public opinion and terrorized others into silence. Their preferred instrument of violence–the guillotine–is now making a (so far) symbolic reappearance in demonstrations in the US.

Don’t exaggerate you say? Tell it to the scores who are already losing their livelihoods to the Twitter mob for being insufficently revolutionary; to the homeowners attacked by arsonists for flying the wrong flag; to the family of the man ambushed and killed in Portland for opposing the rioters.

OK ready to FIGHT BACK?

Nothing could be further from the spirit of Jesus. It’s often said that England was saved from its own violent revolution by the preaching of Wesley. And it’s true that the glorious gospel of grace is the greatest enemy of this disorder. It can not only heal the division between us and God, but between each man and his neighbor.

It is for this reason that the Jewish people–the bearers of the gospel–and the non-Jews who will receive it (Christians) will find themselves in the cross-hairs of the revolutionary movement. Not coincidentally the Catholic Church was the special target of the French Revolution, its people losing livelihoods, properties, and lives.

I often think of the offhand remark made years ago by the Catholic Cardinal Francis George in Chicago: “I expect to die in bed, my successor will die in prison and his successor will die a martyr in the public square. His successor will pick up the shards of a ruined society and slowly help rebuild civilization, as the church has done so often in human history.”

He later expressed some embarrassment at his words, but to me it sounds like the Holy Spirit. The only question is whether the church alone will indeed help rebuild civilization. Too many of us downplay the central message of the Hebrew bible, the gospels and the epistles: following a season of intense persecution, an end to this age is coming–and then it will be God’s Messiah who rebuilds the ruins at his return.

Are we foolish to think this could be imminent? Jesus said instead the foolish virgins were those who did not think the bridegroom’s coming was at hand. And of all the generations, ours is the first to see in such fullness that regathering of the exiles to Israel which is inextricably linked throughout the scriptures with the redemption of Israel and of the world: see for example Deuteronomy 30, Jeremiah 31, or the words of Jesus in Luke 21:

“They will fall by the edge of the sword and be led captive among all nations, and Jerusalem will be trampled underfoot by the Gentiles, until the times of the Gentiles are fulfilled.

“And there will be signs in sun and moon and stars, and on the earth distress of nations in perplexity because of the roaring of the sea and the waves, people fainting with fear and with foreboding of what is coming on the world. For the powers of the heavens will be shaken. And then they will see the Son of Man coming in a cloud with power and great glory. Now when these things begin to take place, straighten up and raise your heads, because your redemption is drawing near.”

And he told them a parable: “Look at the fig tree, and all the trees. As soon as they come out in leaf, you see for yourselves and know that the summer is already near. So also, when you see these things taking place, you know that the kingdom of God is near. Truly, I say to you, this generation will not pass away until all has taken place. Heaven and earth will pass away, but my words will not pass away.”

We must note one great barrier yet remains to the completion of the ingathering: some 40% of world Jewry remains in exile in the United States, and shows little sign of willingness to leave. What cataclysm will it take to change this?

Let’s allow the word of God to guide our hearts and our minds when turmoil descends on this earth. Those who recognize the signs of the times will often paradoxically recoil in horror and say we’ve got to stop this! Our affections are still set on this world.

Jesus instead says lift up your heads. A mother’s birth pangs will be quickly forgotten once the new life appears.

And meanwhile, thank God, he’s given into our hands the opportunity to work with the people of Israel to rescue such precious new lives as they’re born to our neighbors.