The first cloud that caught my attention this week was tiny, the size of a man’s hand in an otherwise blazing blue sky Thursday: 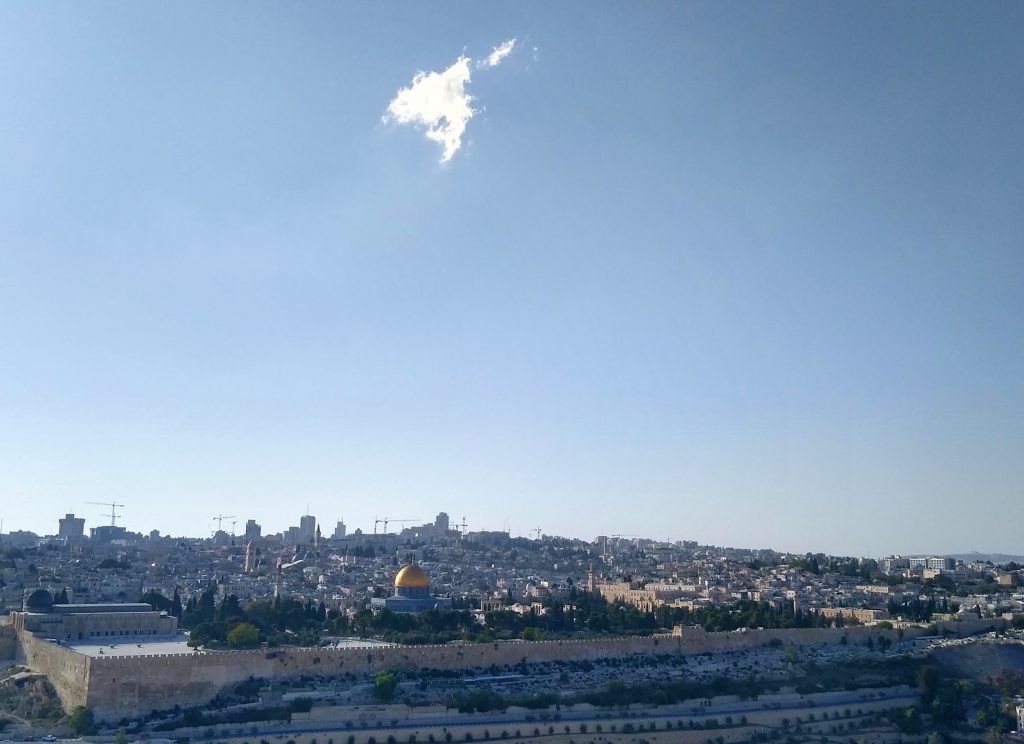 Oddly, it hovered directly above the gold dome over the rock on which Abraham is said to have bound Isaac for sacrifice, the same rock which by some accounts was inside the holy of holies when Israel’s temples stood. As I puzzled over the symbolism of this, the thought came of David purchasing this very threshing floor for an altar after he saw there the angel of the LORD.

By this morning the skies over Jerusalem were heavy with moisture-laden clouds: 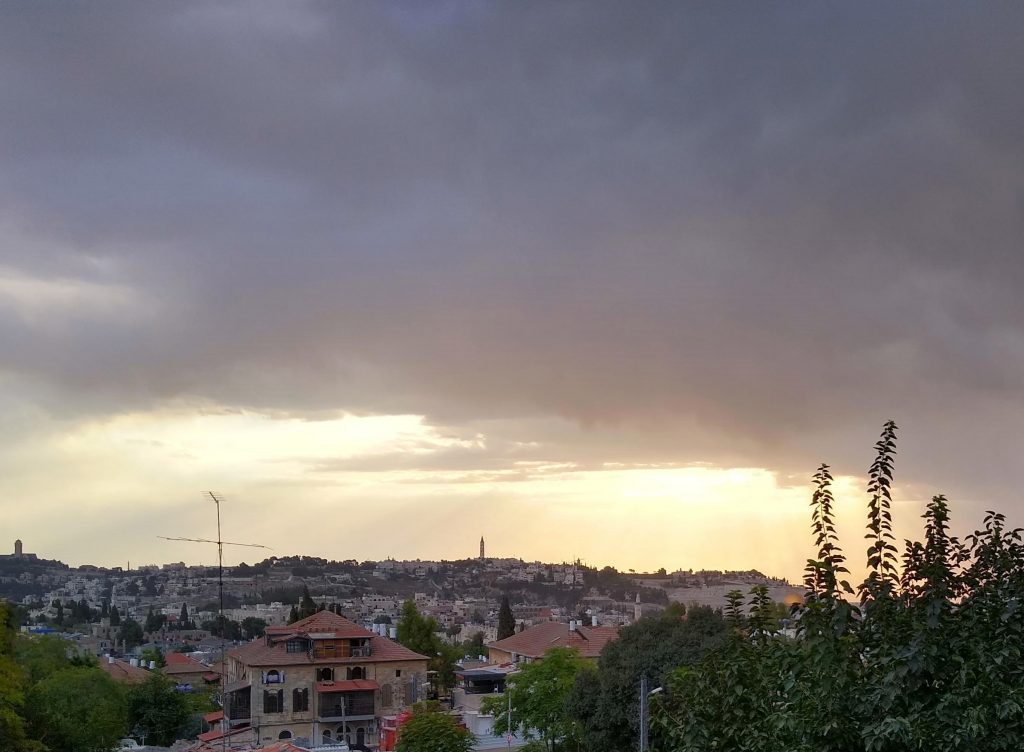 And when I joined our Jaffa community for their morning meeting, our coworker Julio shared his sense that this early rain represents the beginning of a new season, an outpouring of God’s spirit after our long sojourn in the dry wilderness.

Some things certainly seemed to shift this week. For the first time since the corona outbreak the interior ministry in Israel on Tuesday approved new visas for Iraqi children to come for heart surgeries. And after they ignored several pleas to also allow new coworkers into the country, I finally felt desperate enough to try praying. My prayer was interrupted by the buzzing phone; it was the interior minister’s aide telling us the permissions were on their way. By Thursday they even told me they’d give me residency in Israel so I could travel in and out of the country freely. After 20 years of getting bounced back from Israel’s borders, and telling myself I didn’t mind, I have to admit this touched me deeply.

And if we are entering a new season, it is not just a return to what we were doing before corona. As I’ve tried to share over the past few weeks, I have the conviction and hope that the time is ripe for God’s glory to shine more brightly through Shevet Achim. I felt it today as I drove a young Gaza mother and her three-month-old son Zaed up to Hadassah Hospital in Jerusalem to prepare him for a second surgery. We spoke of God’s promise to Abraham, Isaac and Jacob to make their seed a blessing to all the peoples of the earth. We spoke of religious people of all stripes who look down on others to justify themselves with God. We spoke of the humble believers who see all men as brothers because they know how much we all depend on his mercy and grace. I spoke of our confidence that we’ll be accepted on the day of judgment for the sake of the lamb of God, who took our place just as the ram took Isaac’s place long ago on the temple mount.

One can share all these things from the word of God and feel they’re bouncing back. It didn’t feel that way today. And when we reached Hadassah, it was a joy to watch our Jewish partners confirm these words by loving and honoring their Muslim neighbors: 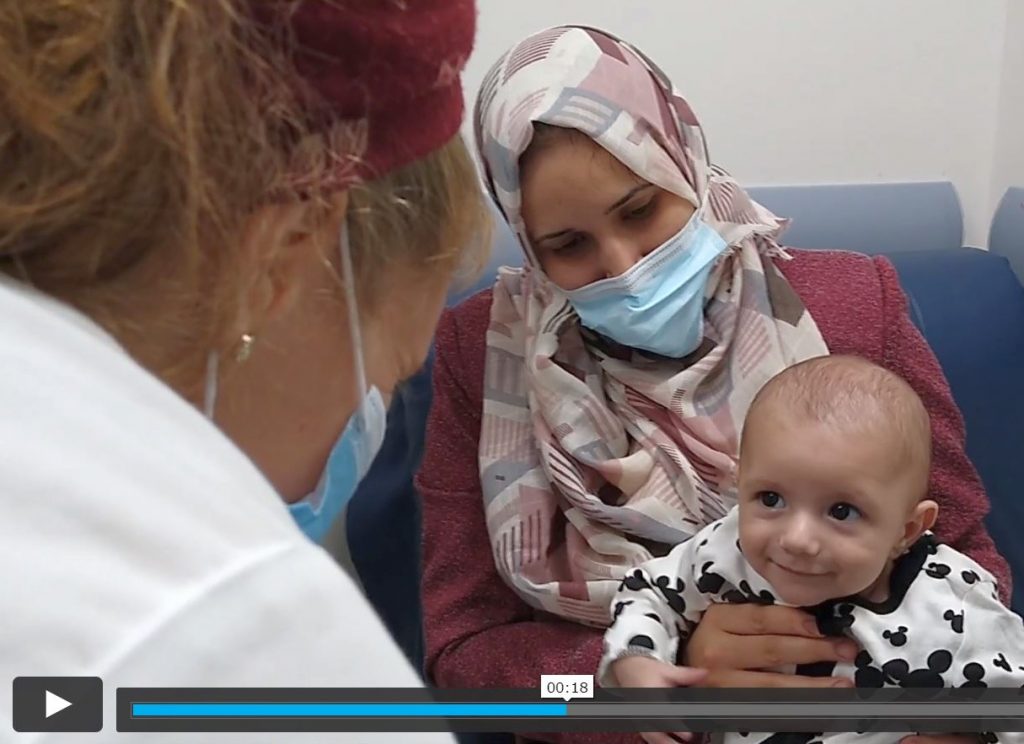 And the staff at Hadassah seemed pierced by what they were experiencing. Our relationship with them is new and they couldn’t help but ask for an explanation of how these children are coming. When I told one woman in management how Hadassah was partnering with us, she said something about how we find “help along the way.” That led to the story of the Good Samaritan; and when she realized it was from the New Testament that led to the simple but profound truth that everything we Christians believe was given to us through the Jewish people.

Before leaving Hadassah I checked in on newborn Omar in the cardiac ICU, who is awaiting his life-saving emergency surgery on Tuesday: 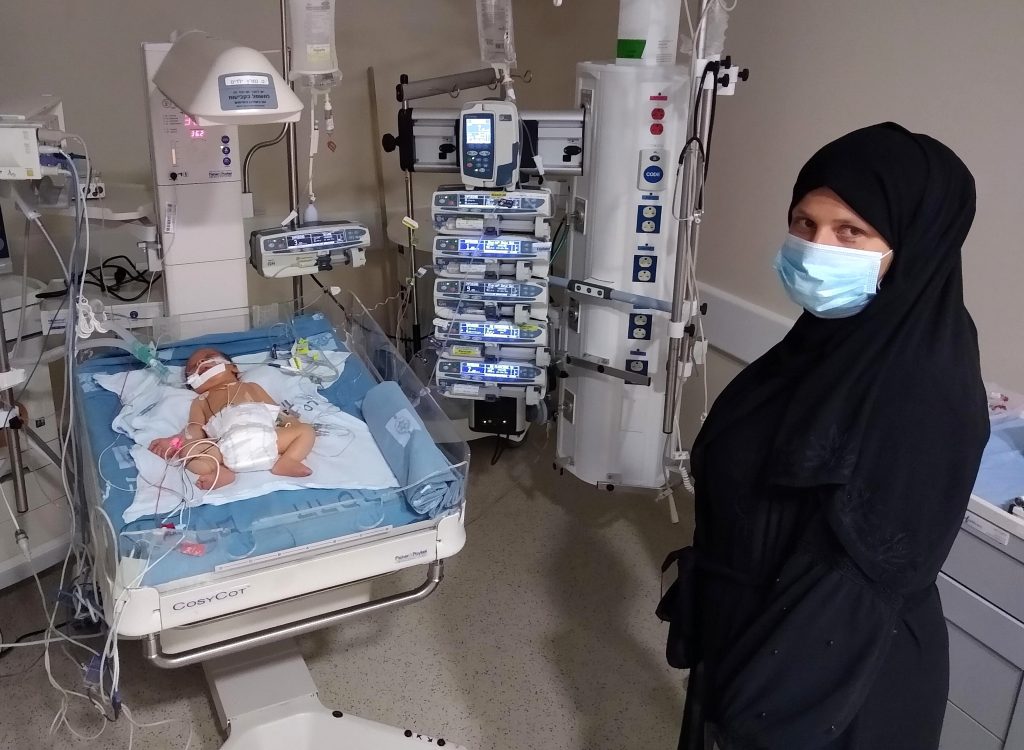 His mother from Gaza seemed timid and uncertain Thursday after she reached Jerusalem for the first time in her life, just two days after giving birth to Omar. Now just three days later I was struck at how she swept elegantly through the hallways of Hadassah’s gleaming new hospital tower as if she owned the place: 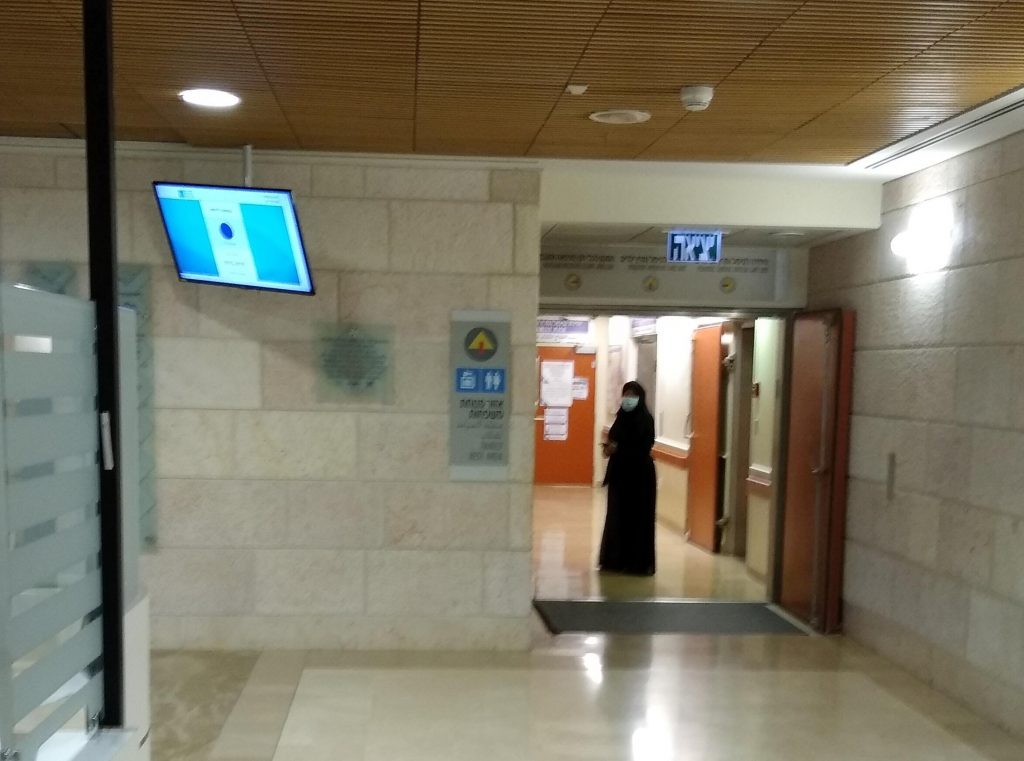 “Thank you” a Jewish mother called out as she passed, for some unknown favor given. There’s something prophetically beautiful about seeing our Muslim neighbors feeling at home and confident among their Jewish brothers.

I had the same thought driving back to our Jerusalem guesthouse. Passing the Jewish market I saw an Arab couple relaxing by the curb. Their young son was acting out and shouting at passersby, the parents unashamed and unconcerned, feeling themselves part of the great human family around them.

These too, just like me, want to know there is a place for them in Israel. And that is the story of the New Testament.