My letter to you last Sunday night was brief. Doctors had just come out of the emergency room and told me they didn’t think our much-loved Alaa from Gaza was going to survive.

Over the next day or two it became clear that this was caused by a mistake in his medication. I was by his side Sunday night as he again and again communicated to the caring and capable ER staff that he was allergic to a certain antibiotic. But somehow minutes later he was injected with an antibiotic of the same category. Alaa immediately felt what was happening in his body, sat bolt upright, shouted “Allergy!” and then collapsed.

Over the years in our community I believe we’ve made mistakes that have contributed to a child’s death. I’ve been convicted that we have to be completely transparent with the family, humbly ask their forgiveness, and seek to learn from our mistakes. In this spirit I went to talk to the doctors who were overseeing Alaa’s care.

One of them was completely open, full of integrity and humility. He too had learned we have to accept the truth and not allow it to destroy us. He acknowledged the need to change their computer system to allow different departments to access each other’s patient records.

The other doctor though was defensive and refused to speak with me about what had happened. In a situation that cried out for grace and truth neither was offered.

More disappointments, small and large, were also piling up. I went home to sleep after that long night in the ER, only to be awakened by a neighbor demanding that I move our vehicle from his preferred parking spot. There’s been talk of puncturing our tires, and a nail has turned up in one of them. Meanwhile the hospital wouldn’t provide Alaa’s uncle with a place to sleep, and he was stuck on a chair out in the hallway. And most frustratingly, even as several of our coworkers were in quarantine after driving confirmed corona cases from Gaza, the interior ministry without explanation did not issue permissions for our much-needed incoming staff to enter Israel, and their flights had to be delayed.

By midweek I was starting to feel disgruntled with our neighbors, and I jotted down this thought for the Sunday letter:

I would like to tell you they crowned themselves in glory this week. But the truth is like the church they are made up of failing individuals. The solution to the world’s problems is not the Jewish people, it is the Jewish messiah.
Friends, when we feel let down by people around us, before we talk let’s first of all remember the patience and long-suffering the Lord has shown toward us. Let’s remember the great debt he’s forgiven us, before we start collecting on the small debts others owe us. Lord, help me to keep quiet and carry on.
That open and honest ER doc led a team that spent 35 minutes resuscitating Alaa last Sunday night, until they could connect him to the ECMO device which does most of the work of the heart. They wouldn’t give up on him, even though they doubted they would succeed. And today against all odds the ICU doctors were able to remove the ECMO device, and Alaa’s heart is now working again on its own: 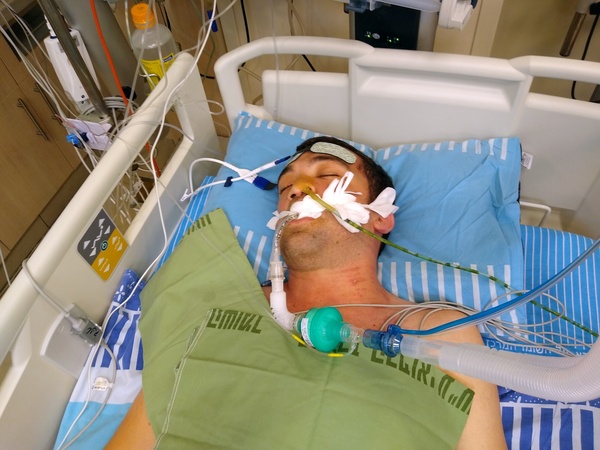 These next 48 hours are still critical, and I ask us again to rise up in prayer on this young man’s behalf. His life may yet turn out to be a picture in the physical of God’s mighty redeeming power which we all so desperately need.

Also today the interior ministry permission for our coworker Alena’s return flight finally came through (along with permissions for five more urgent Iraqi babies, all two months old!). Apparently Alena’s permission was issued in time for her flight last week, but no one remembered to forward it on to us. We’re still waiting and asking for a permission this month for our coworker Frank.

So things are looking brighter, and walking through Jerusalem tonight one was reminded of this by the lights of the fourth night of Hanukkah: 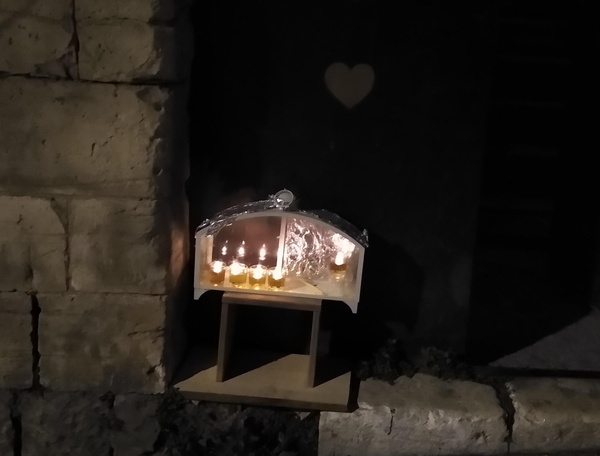 Our community was founded during Hanukkah 26 years ago, in fact registered with the government on this very day in 1994: 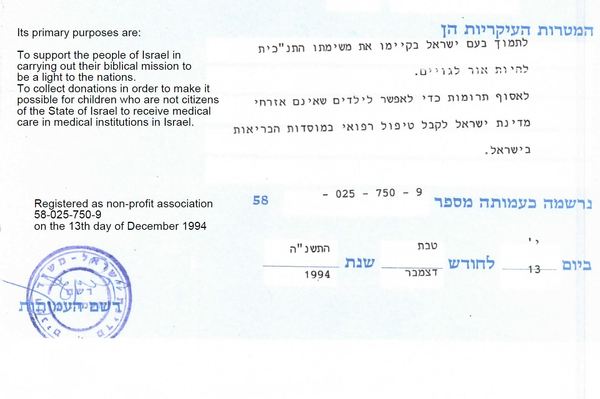 It’s a miracle of preservation that we are still here. Our Father has guarded our hearts against taking on offenses (see above), without which shield no one can serve successfully in the Middle East. And he’s also inexplicably provided funding year after year to take on all these urgent children. (Bing! In the middle of that sentence our Gaza coordinator Amar just forwarded reports on two more newborns in Gaza who are life-and-death emergencies.)

I’m surprised and pleased to be able to share tonight that he’s gone ahead of us strongly, through gifts large and small from friends old and new, and our year-end need has already dropped from $550,000 down to $188,000. This gives reason for hope that it could all be knocked out by the turn of the year.

And Hanukkah of course is the story of the preservation of the Jewish people from one of the periodic attempts to annihilate them, which then made possible the birth of Messiah some 160 years later. If you haven’t yet read the story of 1 Maccabees, which survives as one of the apocryphal books in the Catholic bible, it’s highly recommended. Here’s a key excerpt from the first chapter:

Then the king wrote to his whole kingdom that all should be one people,
and abandon their particular customs. All the Gentiles conformed to the command of the king,
and many Israelites delighted in his religion; they sacrificed to idols and profaned the sabbath.
The king sent letters by messenger to Jerusalem and to the cities of Judah, ordering them to follow customs foreign to their land;
to prohibit burnt offerings, sacrifices, and libations in the sanctuary, to profane the sabbaths and feast days,
to desecrate the sanctuary and the sacred ministers,
to build pagan altars and temples and shrines, to sacrifice swine and unclean animals,
to leave their sons uncircumcised, and to defile themselves with every kind of impurity and abomination;
so that they might forget the law and change all its ordinances.
Whoever refused to act according to the command of the king was to be put to death.
In words such as these he wrote to his whole kingdom. He appointed inspectors over all the people, and he ordered the cities of Judah to offer sacrifices, each city in turn.
Many of the people, those who abandoned the law, joined them and committed evil in the land.
They drove Israel into hiding, wherever places of refuge could be found.
On the fifteenth day of the month Kislev, in the year one hundred and forty-five, the king erected the desolating abomination upon the altar of burnt offerings, and in the surrounding cities of Judah they built pagan altars.
They also burned incense at the doors of houses and in the streets.
Any scrolls of the law that they found they tore up and burned.
Whoever was found with a scroll of the covenant, and whoever observed the law, was condemned to death by royal decree.
So they used their power against Israel, against those who were caught, each month, in the cities.
On the twenty-fifth day of each month they sacrificed on the pagan altar that was over the altar of burnt offerings.
In keeping with the decree, they put to death women who had their children circumcised,
and they hung their babies from their necks; their families also and those who had circumcised them were killed.
But many in Israel were determined and resolved in their hearts not to eat anything unclean;
they preferred to die rather than to be defiled with food or to profane the holy covenant; and they did die.
And very great wrath came upon Israel.

We can see once again in these events how (since the return from the Babylonian exile) the faithful among the Jewish people have clung tenaciously to the signs of their covenant–Shabbat, circumcision, and kashrut–even at the cost of their own lives. Yet we Gentile readers of the Jewish documents of the New Testament all too easily conclude that Jesus and his disciples did away with these covenant signs, not only for Gentiles but even for Jews.

These are life and death matters for faithful Jews! If indeed these Torah commandments were dismissed by Jesus and his disciples, then what most of our Jewish neighbors believe is true: Jesus came to start a new religion, and was rightly rejected by the majority of his people.

But thank God, Jesus and his disciples were also faithful Jews. And a careful reading of the New Testament shows that Jesus didn’t argue with the religious over whether to keep Shabbat, only over how to keep Shabbat. When he said that what goes in the mouth does not defile a man, but rather passes through the stomach and is expelled, he was upholding the Torah’s teaching that impurity from eating unclean foods only lasts until evening. Further arguments over the washing of hands concerned traditions of men, not Torah commandments.

And–crucially–while the Jerusalem Council of Acts 15 freed us believing Gentiles from circumcision and most of the obligations of the Torah (thank God), the apostles never would have dreamed of saying the same thing to the believing Jews.

It would take a long and careful study to establish these points beyond doubt. And each of us has the liberty and the responsibility to interpret the scriptures ourselves under the instruction of God’s spirit. So for tonight I’ll just put the challenge out there: do we love our Jewish neighbors enough to take these questions seriously, recognizing that a careless answer could be a stumbling block in the way of our elder brothers?