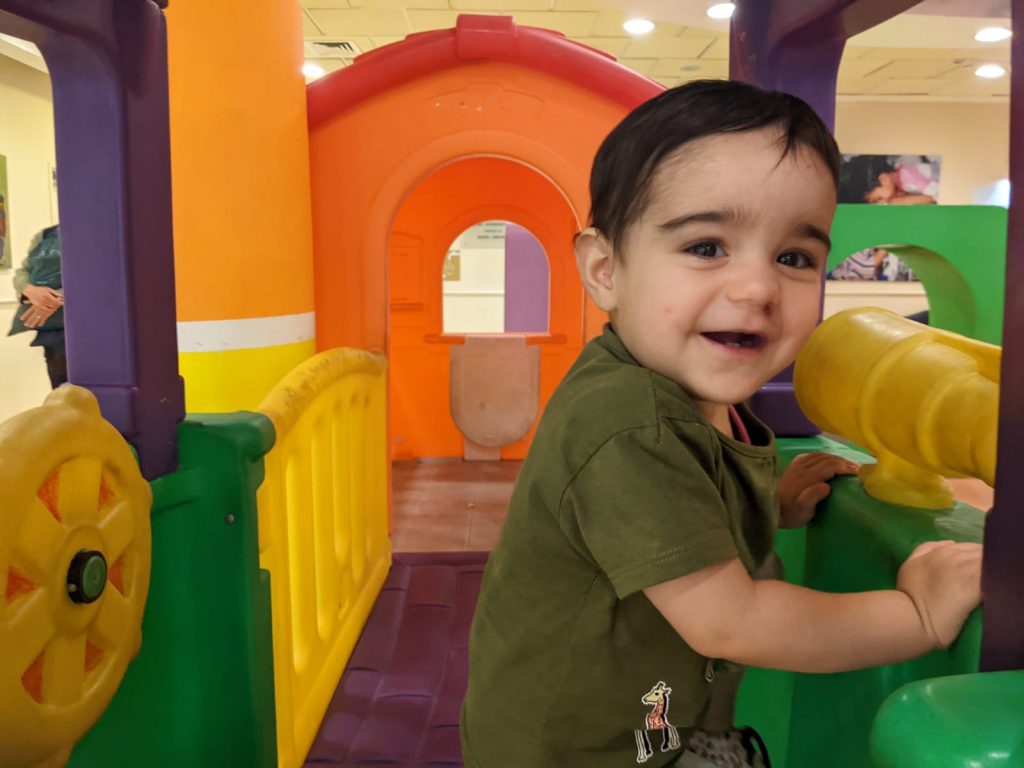 Our beautiful little friend Lara had an echo at Sheba Hospital Thursday, and thank God her heart is still doing very well a month after surgery. She has some slight narrowing near her pulmonary valve as a result of thickened muscle walls in her heart, but her cardiologist thinks this can be resolved with medication. He’ll see her again in a week to check how her new medicine is helping.

While this was disappointing news for her mother, who was hoping to go home to Kurdistan after this echo, we are grateful that for the most part, Lara is doing very well. She’s a smart little girl with a big personality; the first thing her cardiologist said to us today was, “She has a lot of character, doesn’t she?” We’re excited to have another week with Lara and her mum here in Ashdod. Please pray for good echo results for her next week. 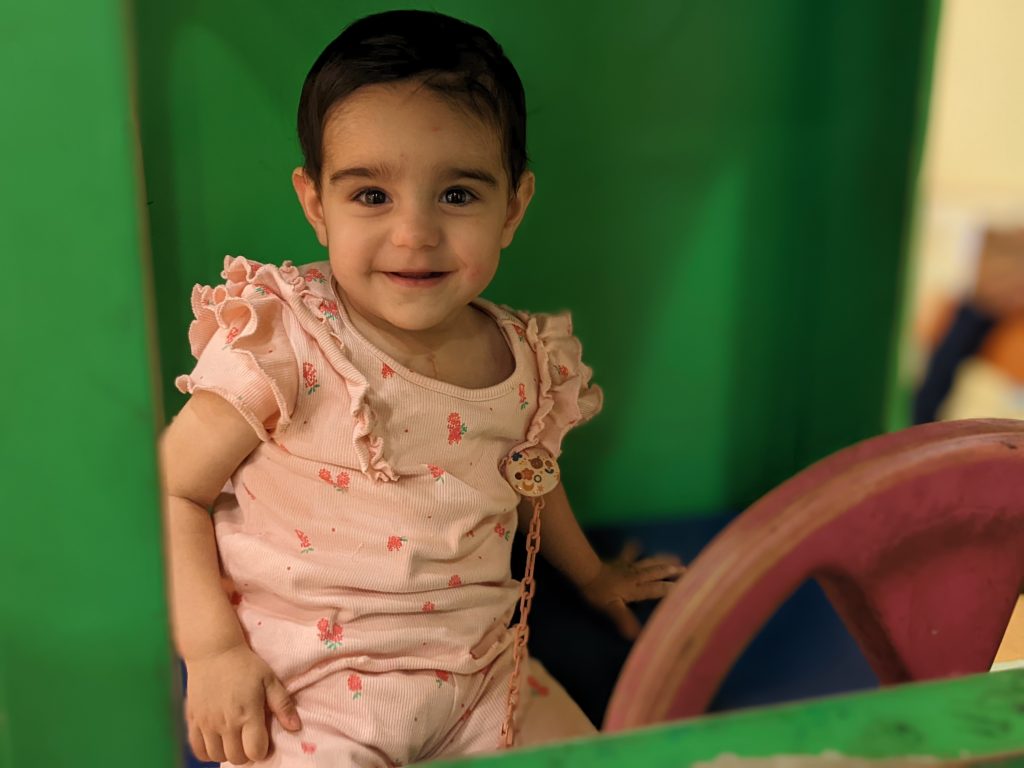 Our beautiful Lara had an echo this morning, the first since her discharge from Sheba hospital last week. She was all smiles during the waiting time and loved the train in the waiting room. As soon as I helped her into the driver’s seat, she gave me a big grin and a wave with a cheerful, “Bye!”

Lara’s heart is doing very well after surgery. The cardiologist explained that her pulmonary arteries are slightly narrowed, but it is not causing problems now and probably never will. He is almost certain that Lara will not need more caths or surgeries in the future. She will come back for one more follow-up echo in another two weeks, after which she can probably go home to Kurdistan. 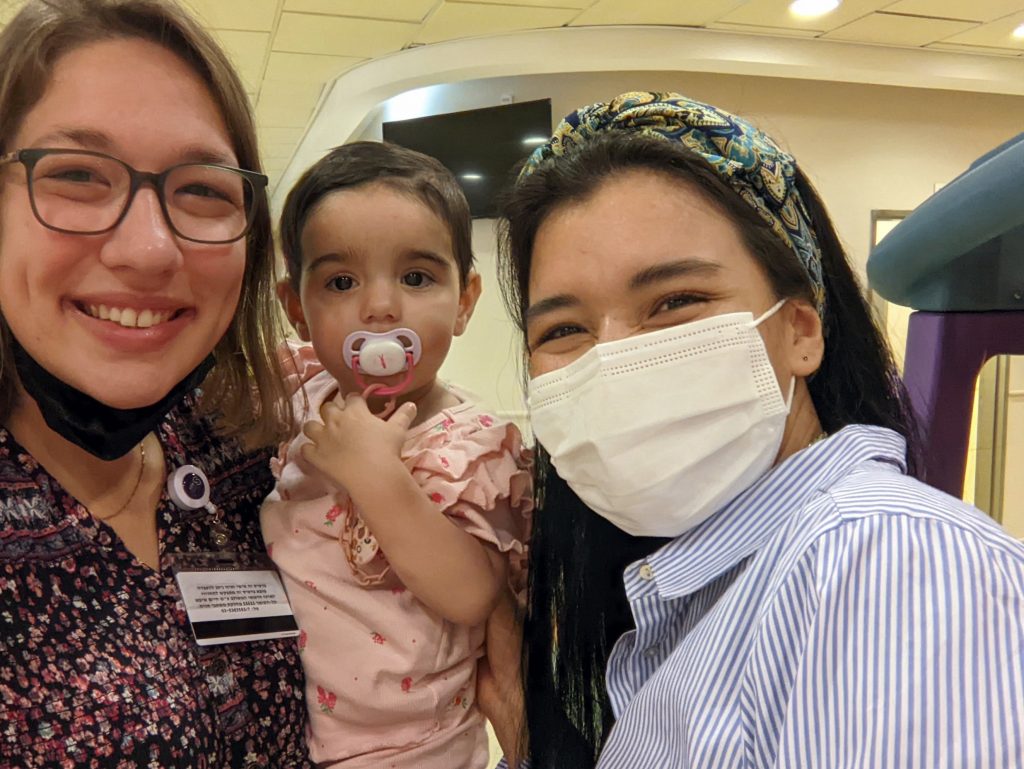 This report is so good to hear, especially considering that it was just two and a half weeks ago that Lara had to be rushed to the emergency room, turning blue and unable to breathe. “Lara is a miracle,” her mom always says with a big smile.

We’re glad to have another couple of weeks with this beautiful little girl and her lovely mother. Please pray for another good echo result in two weeks. 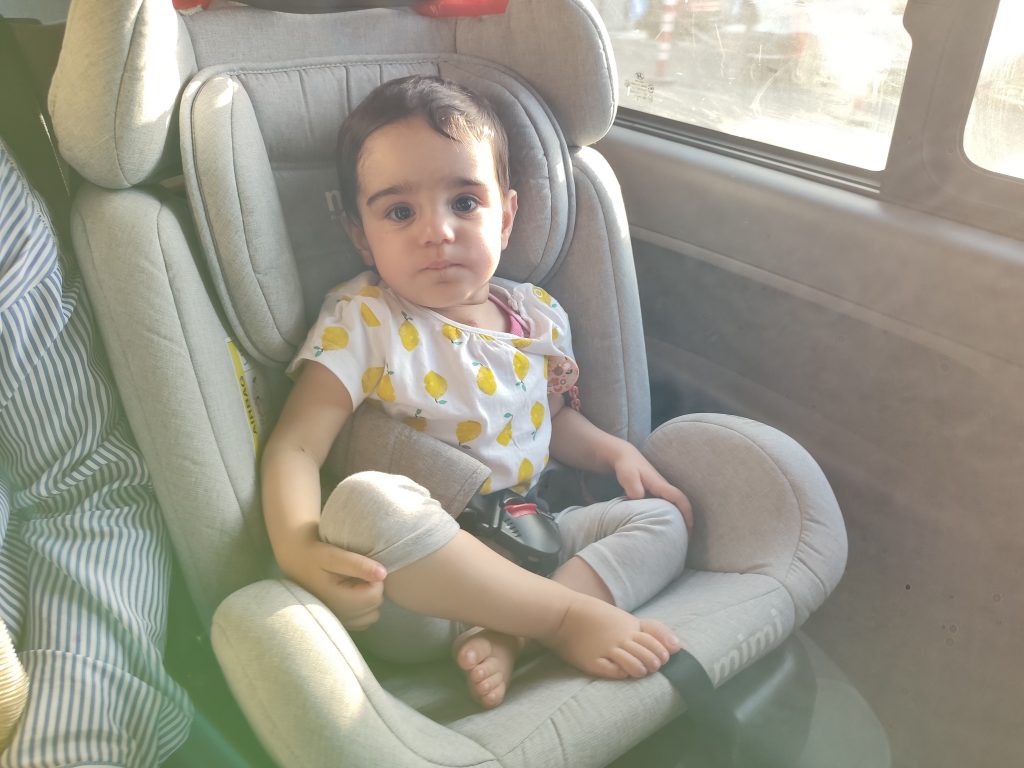 Our cute little Lara is doing very well and was discharged from Sheba Hospital today to our home in Ashdod. 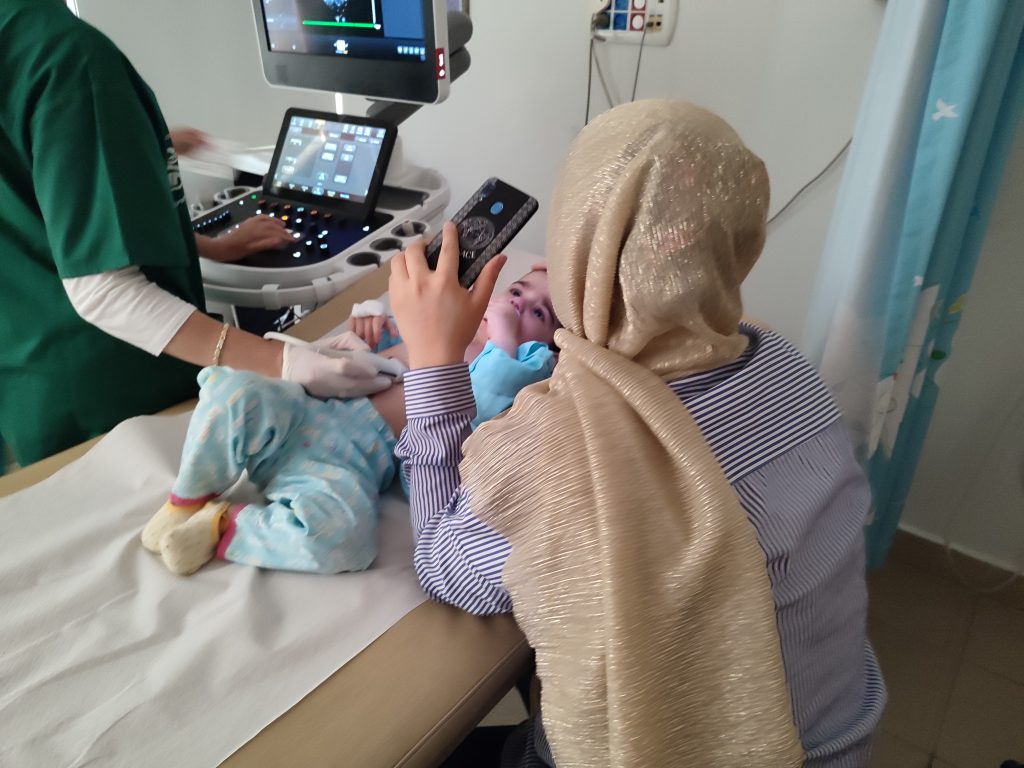 Coworker Bria and I met Lara and her mother and went together with them to an x-ray and an echo for Lara, which she needed, before she could get discharged. 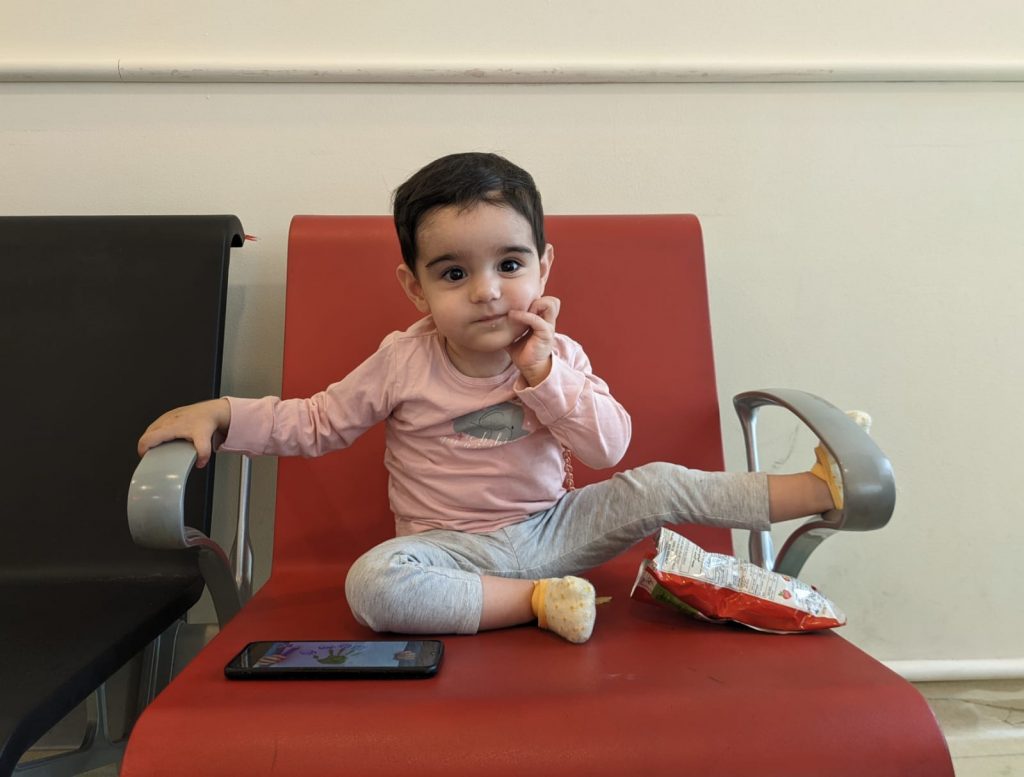 Her heart looks pretty good, just her pulmonary arteries are a little tiny. The doctor was optimistic that they will grow now with Lara growing bigger. 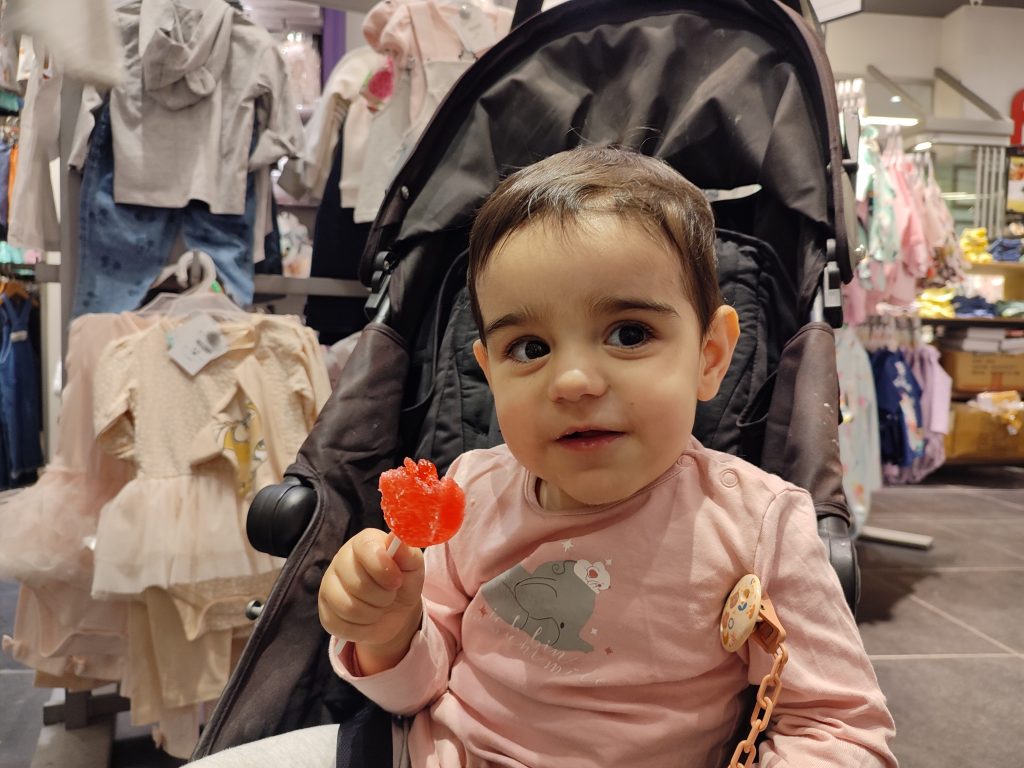 To celebrate this day, we went shopping together and enjoyed looking at all the cute baby clothes. Lara has now some really beautiful dresses. In this time that we spent together, we talked again and again about the fact that they arrived around one week ago. Lara had surgery, her heart is really good now and they are already discharged! All in one week. Look at this! Isn’t it clearly a miracle of God?! It’s amazing to see this little girl so alive and happy.  I just stand in awe of what God did, also through all the doctors and nurses.

In just one week more, Lara will have a cardiac follow-up appointment. Her mother is already very eager to know if they can go completely home. She misses her family back in Kurdistan very much, but we will miss her here also! In this one week, Lara’s mother has already been a big blessing to us and we all love her and Lara. So we are very excited to welcome them to our house in Ashdod now, longer than for just a few hours! May God bless this remaining time here in Israel.

Thank you for this miracle! 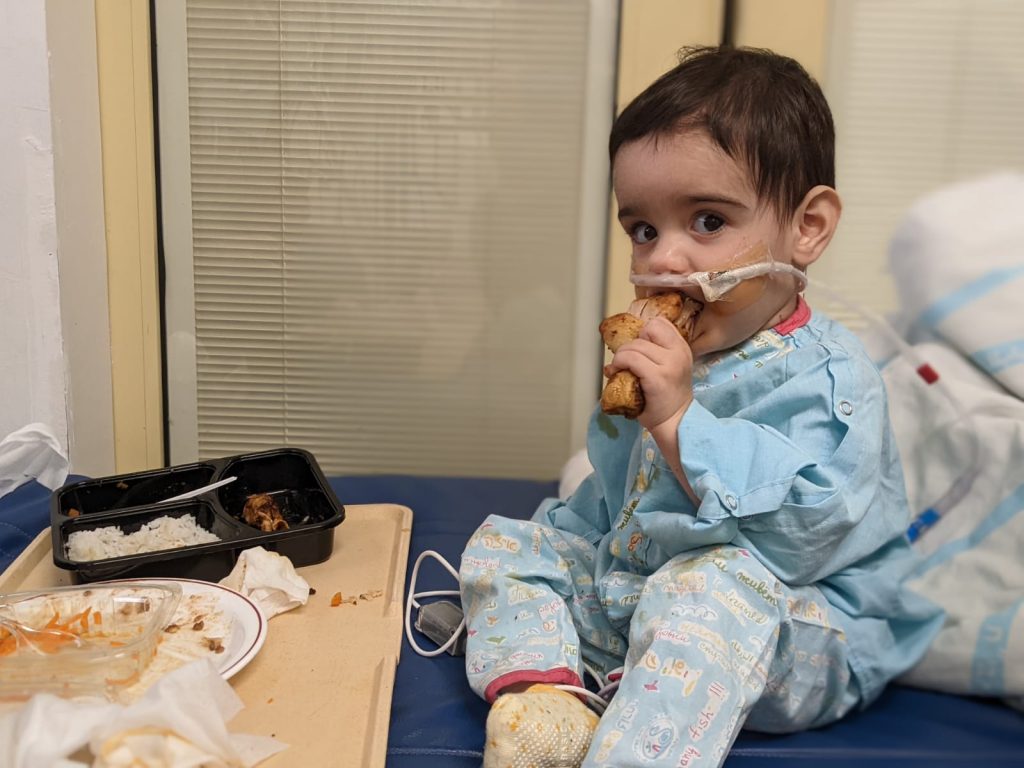 As we have spent quite some time in Sheba Hospital today waiting for the surgery of another child, we could also play with Lara and talk with Lara’s mother for quite some time. 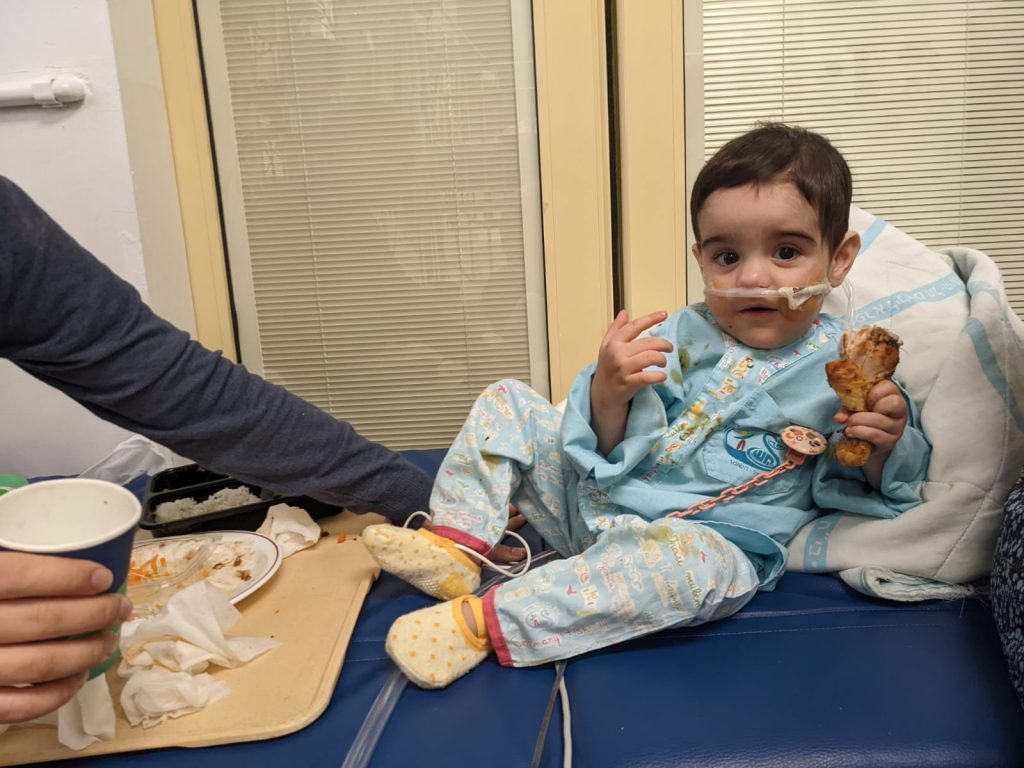 The fluid in Lara’s chest is completely gone, and the doctors are also planning to remove the air support that she is still receiving. If this succeeds and her oxygen is still good even without the oxygen assist, she probably will be discharged to our house in Ashdod this week. Lara is very active and full of energy, and loves eating, dancing, drawing and playing with her new toys. 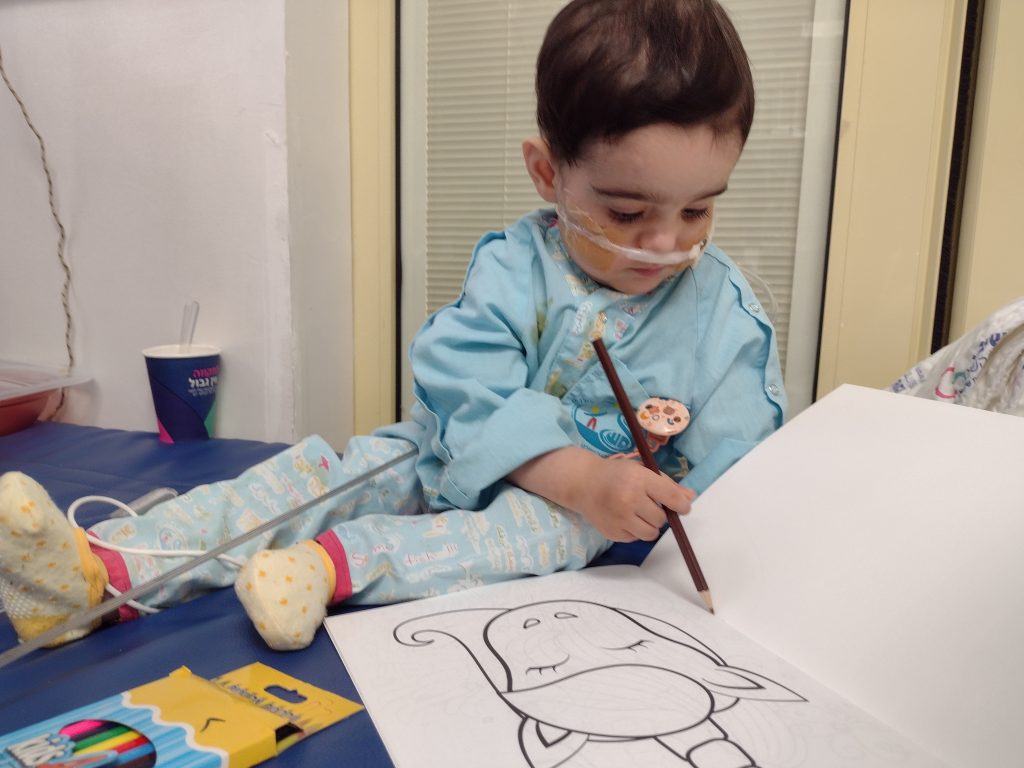 She is smiling very much and is really relaxed and enjoying her time. 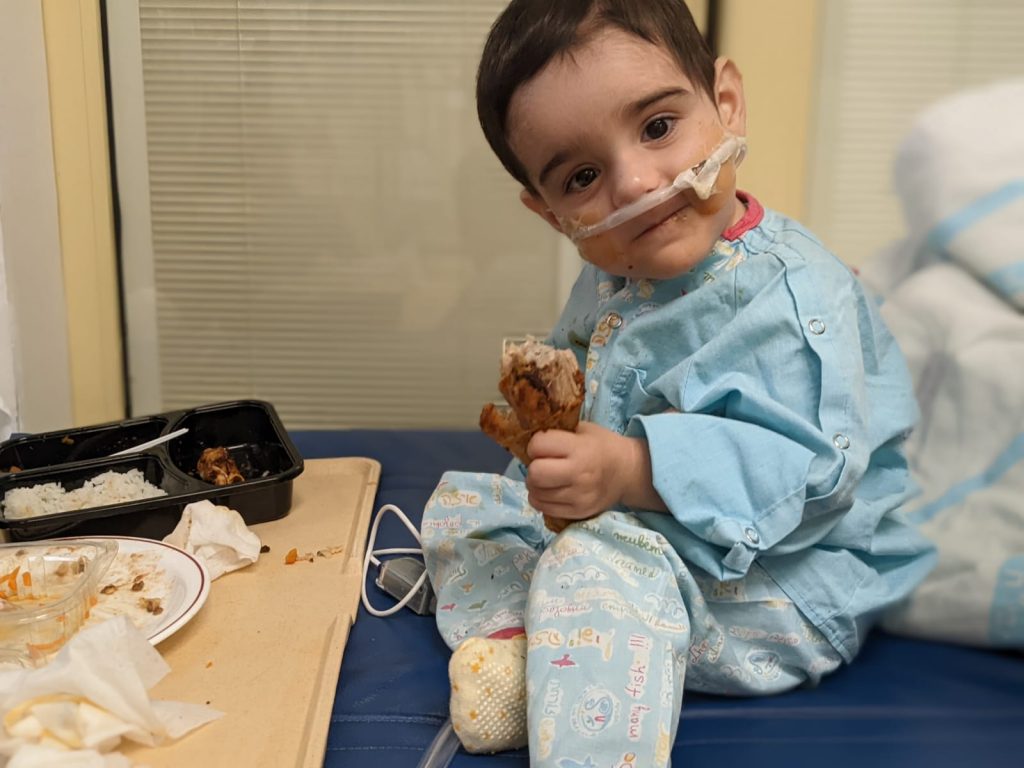 Lara’s amazing mother however, is very tired as Lara is crying very much in the night, so her mother doesn’t get so much sleep. Let us pray that Lara is improving further and can come to Ashdod soon; praying also for strength for Lara’s lovely mother!

Our little Lara is slowly getting better in the ICU of Sheba Medical Center. Her mom happily told me that Lara doesn’t get any oxygen support and is still doing very well. The fluid around Lara’s lungs is decreasing and later doctors may even remove her chest tubes. The doctor was also very happy to tell me that she is getting more active and she was sitting in her bed today.

It’s always very nice to talk to Lara’s mom as she speaks English and loves talking and she also joined us while we were waiting for the cath completion of another Kurdish child. She told us today that she misses Kurdish food and was very happy that we brought her some rice from Ashdod. Thank you Lord that cute Lara is already doing so much better! 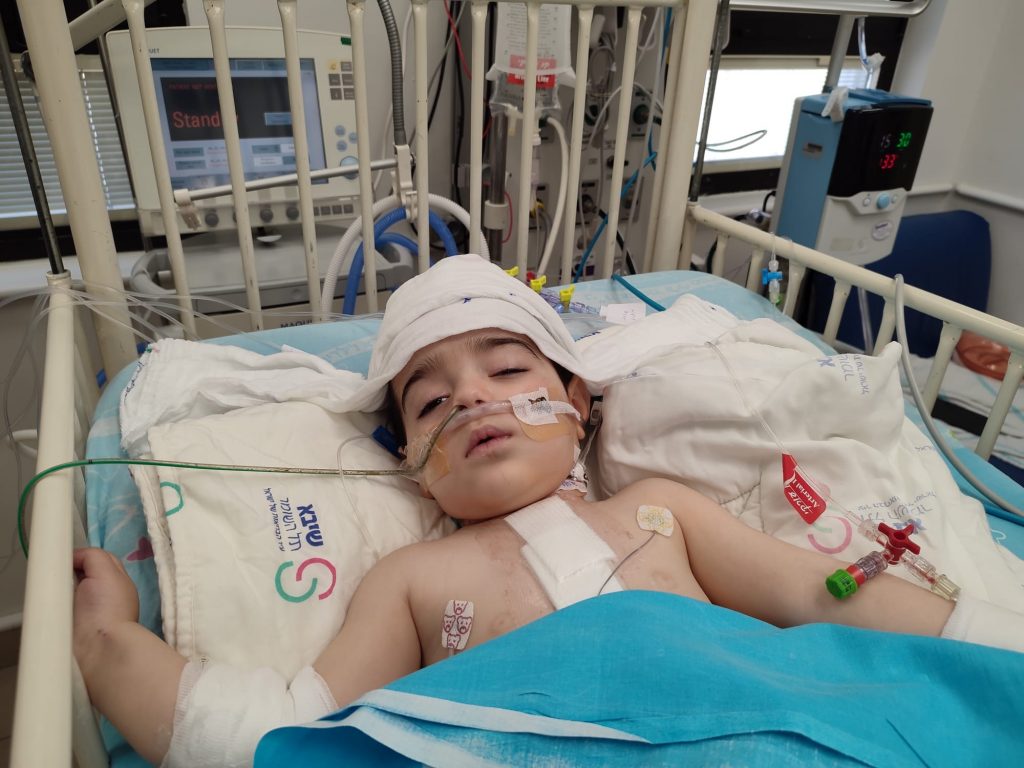 This afternoon, coworker Amelie and I went to visit Lara and her mother at Sheba Medical Center.  Lara’s oxygen level is now at 100, and it was the very first thing Lara’s mother told us excitedly.  It was encouraging to see her eyes filled with relief. 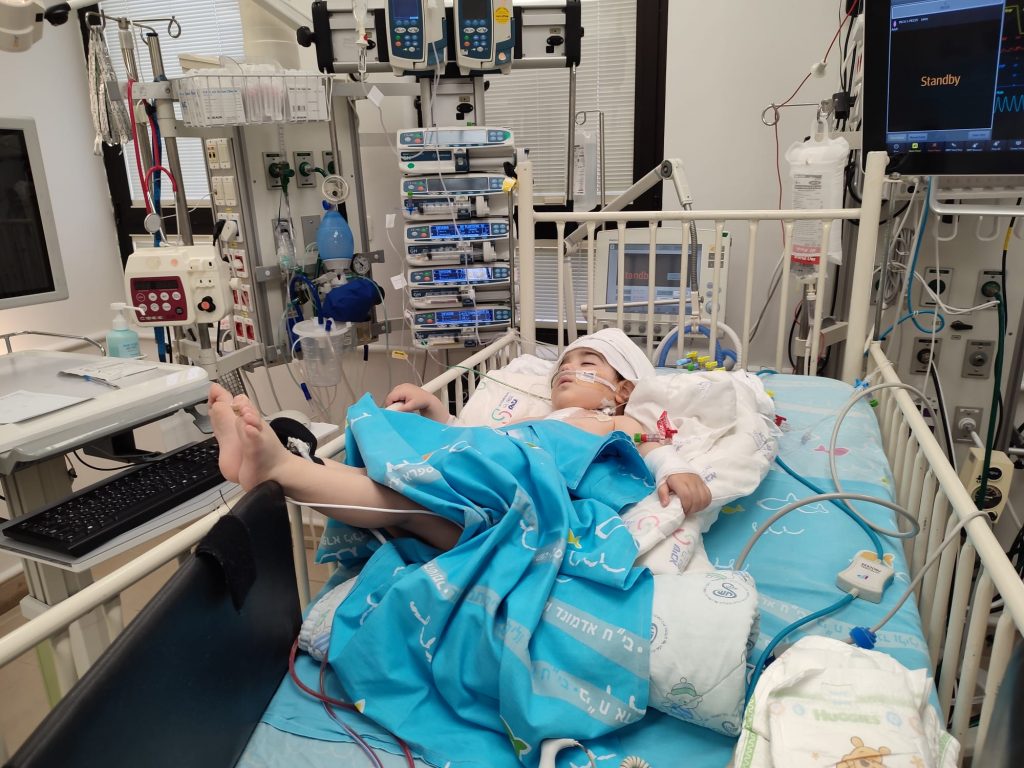 However, the doctor and Lara’s mother told us that Lara was filled with fluid.  Amelie and I were very worried when we heard this, but were told that it is nothing to worry about.  Lara’s mother repeated the sentence, “the doctors said it is normal for the patient to be filled with fluid after the surgery so I’m very glad.”  She also excitedly told us that her daughter was supposed to have another surgery later, but was informed by the doctors that she wouldn’t need it!  We were very happy to see Lara’s mother so ecstatic about Lara’s improvement!

We also asked Lara’s mother if she got any sleep last night.  She told us that she did not have time for sleep this whole week, especially because her daughter keeps on waking up and trying to pull out all of the wires that are attached to her.  “I need to be right next to her so that she can’t detach anything,” her mother said.
Please pray that Lara’s mother would receive the rest that she needs, and that Lara will continue to improve smoothly.
Hide Comments Show Comments 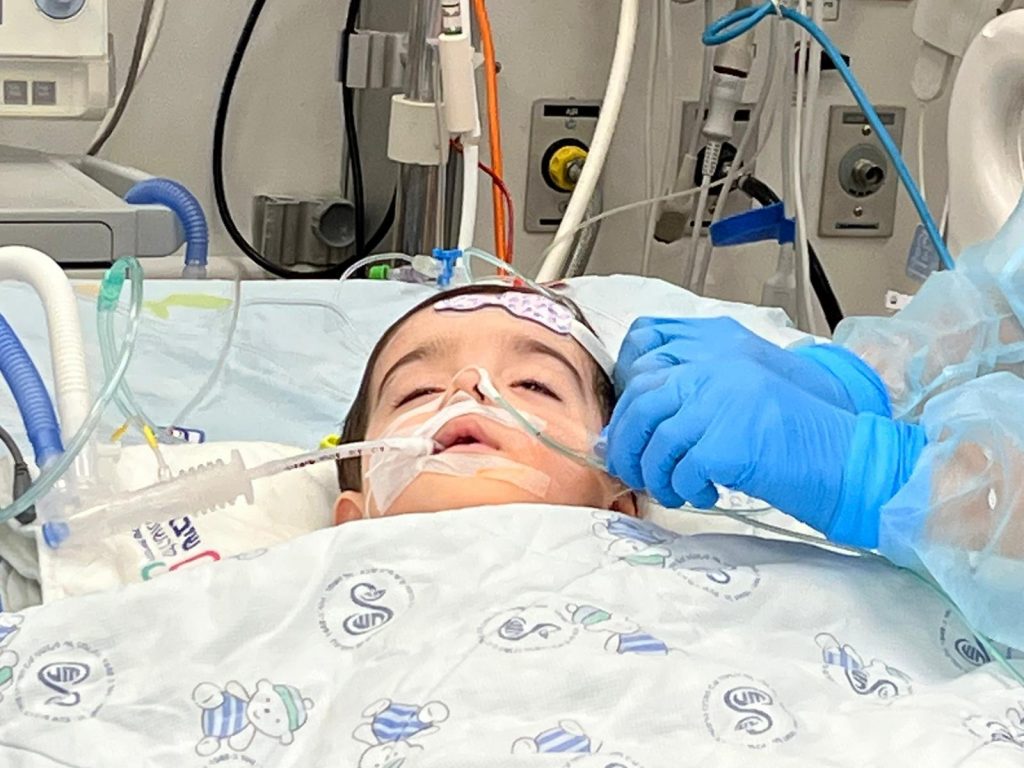 Early this morning, beautiful Lara went into surgery to correct her combination of heart defects. Coworker Junko and I arrived just a few minutes after the surgery started and found Lara’s mother waiting outside the operating room.

For the next three hours, we sat together and waited for news from the OR. Oftentimes, waiting during a surgery can be an anxious and tense few hours. Lara’s mum, however, was calm and relaxed the whole time. After such a whirlwind first two days here, I was glad to get to know her a bit better. We discovered that we share favorite movies–The Lord of the Rings–and we spent much of the waiting time discussing them. “It’s all about an adventure,” she said with a smile, “and now I’m on an adventure myself.” 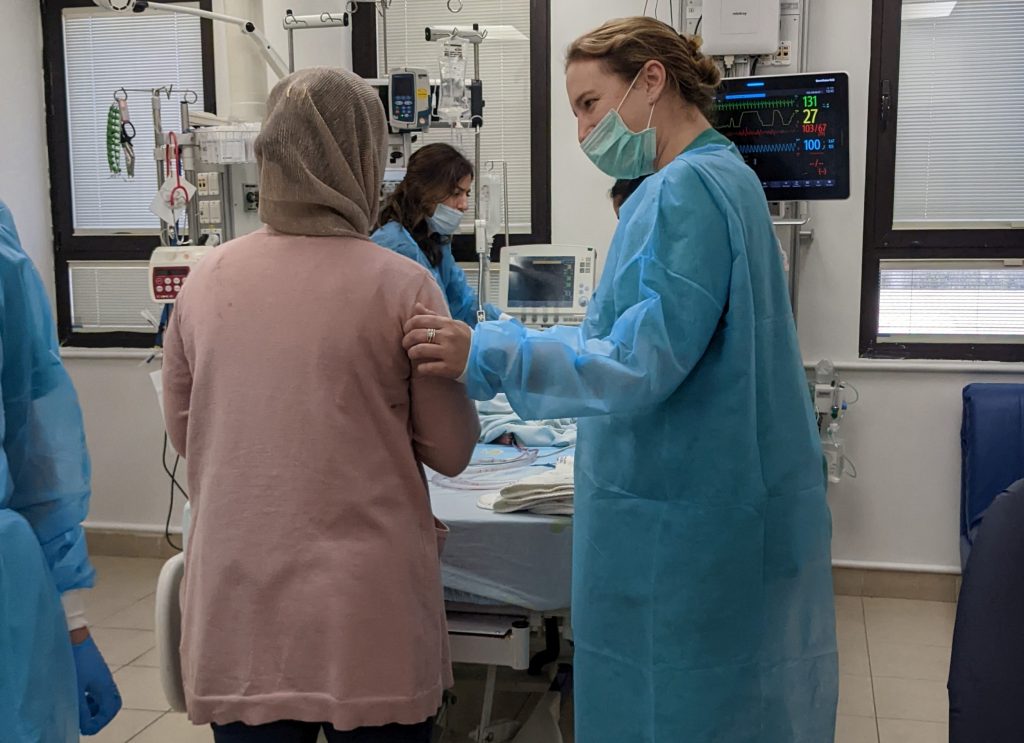 After just three hours, the doctor came out with good news– the surgery went well and the doctors were able to repair everything in one operation! In fact, once the surgery began, they found that Lara’s pulmonary valve was in much better condition than expected and the surgery turned out relatively simple. The surgeon expects that this will be the only heart operation Lara needs for the rest of her life. 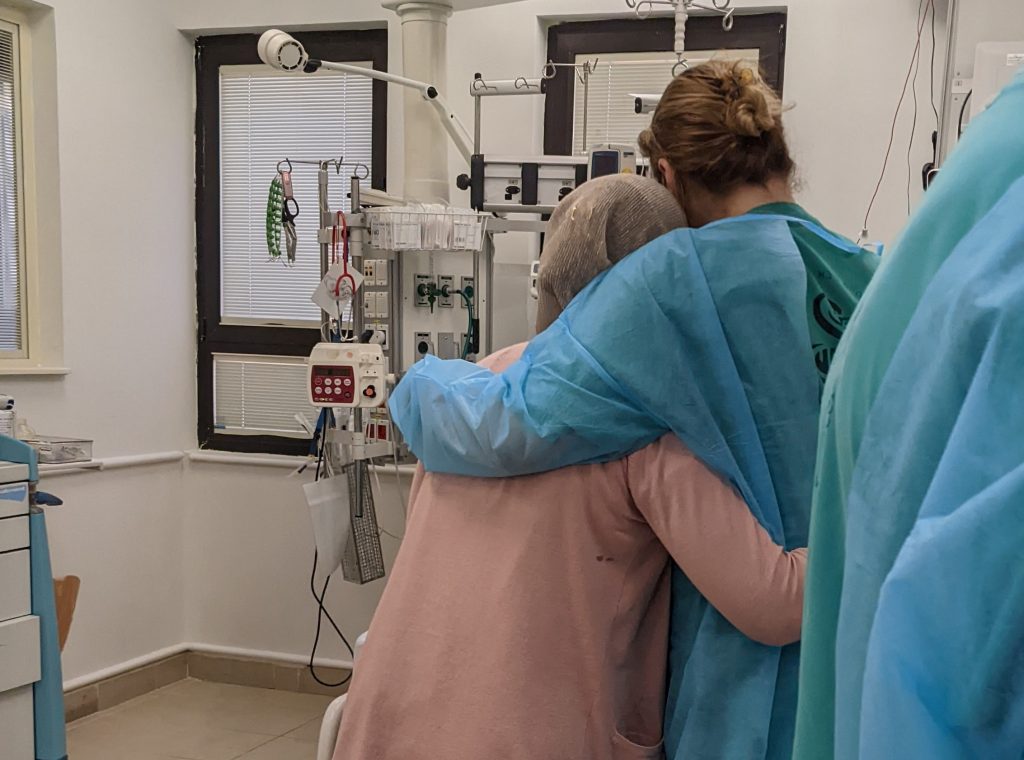 Lara’s mum was excited to see her after surgery, and the doctor in the ICU was happy to welcome her into the room and show her how well her daughter is doing. Just a couple of hours later, she texted me a video of Lara breathing on her own without the ventilator! Lara’s recovery is off to a great start; please pray that it continues smoothly. 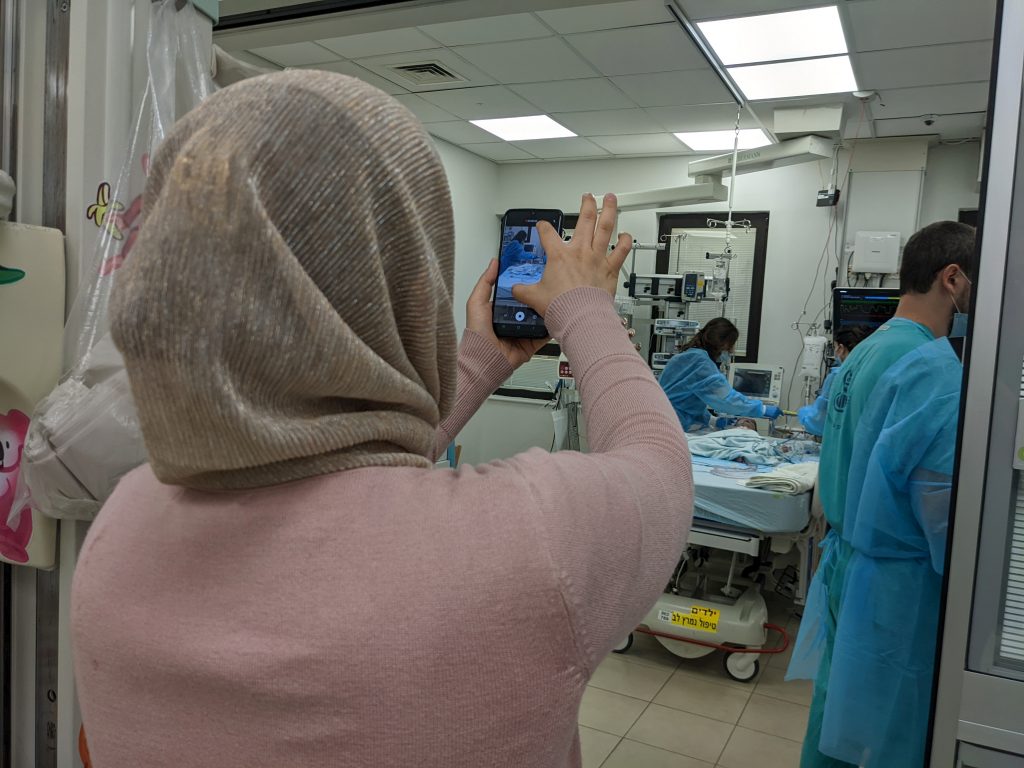 As I sat with Lara’s mum for the morning and listened to her story, a line from The Lord of the Rings came to mind: “Courage is found in unlikely places.” Sometimes, courage is found in grand tales of epic adventures. And sometimes, it is found in a mother’s love, determination, and sacrifice to give her daughter a chance to grow up. Lara’s mother is the very picture of this quiet strength and courage. 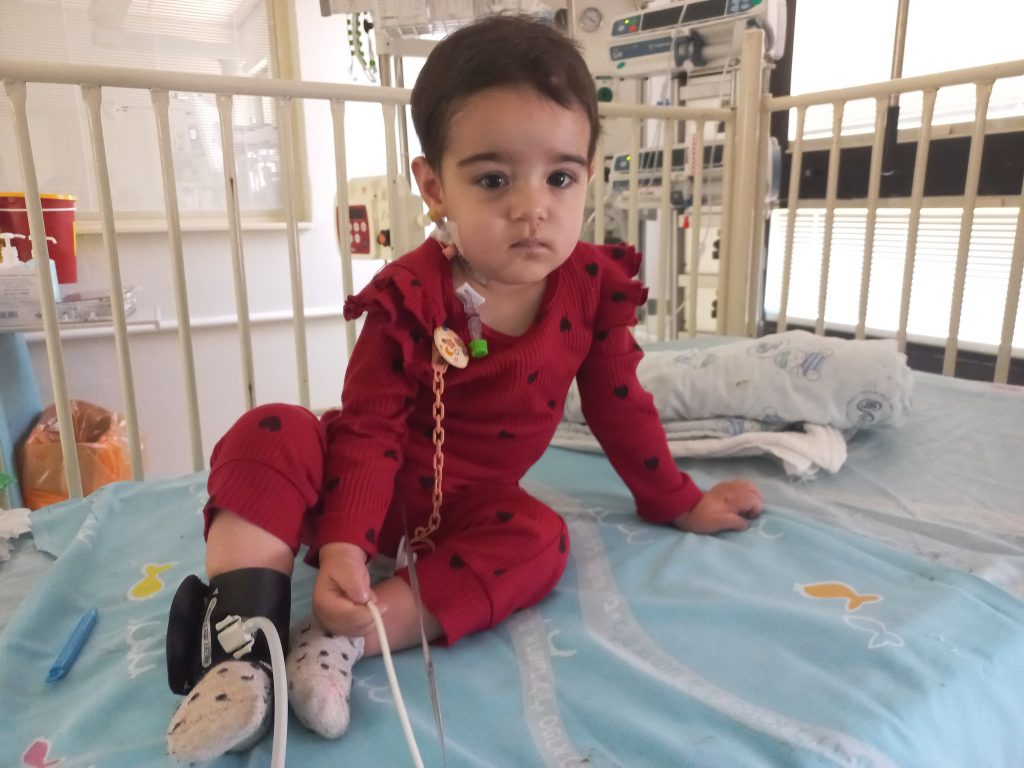 Today, coworker Momo and I visited cute Lara and her lovely mother at Sheba Medical Center’s Pediatric ICU. I first met them today. It is so nice that her mother can speak English. So we spent a long time with them and talked a lot. It makes such a difference, if you can communicate with each other.

Despite this, we found Lara pretty active in her room, without intubation and playing. Lara loves to be artistic, writing or painting.

The doctor told us that Lara will already have her urgent surgery tomorrow. Her mother knows exactly what’s going on and told me, herself thankful that the doctors told her that it should be a very successful surgery.

Lara’s mother already sees and knows how the doctors fight for these children as if they were their own. She is also very thankful for the opportunity to come to Israel because she said that in Kurdistan, nobody could help her daughter. She wants a good life for her daughter with every opportunity available to her, in her future.

So let’s pray for this wonderful person and for blessings over the surgery tomorrow. 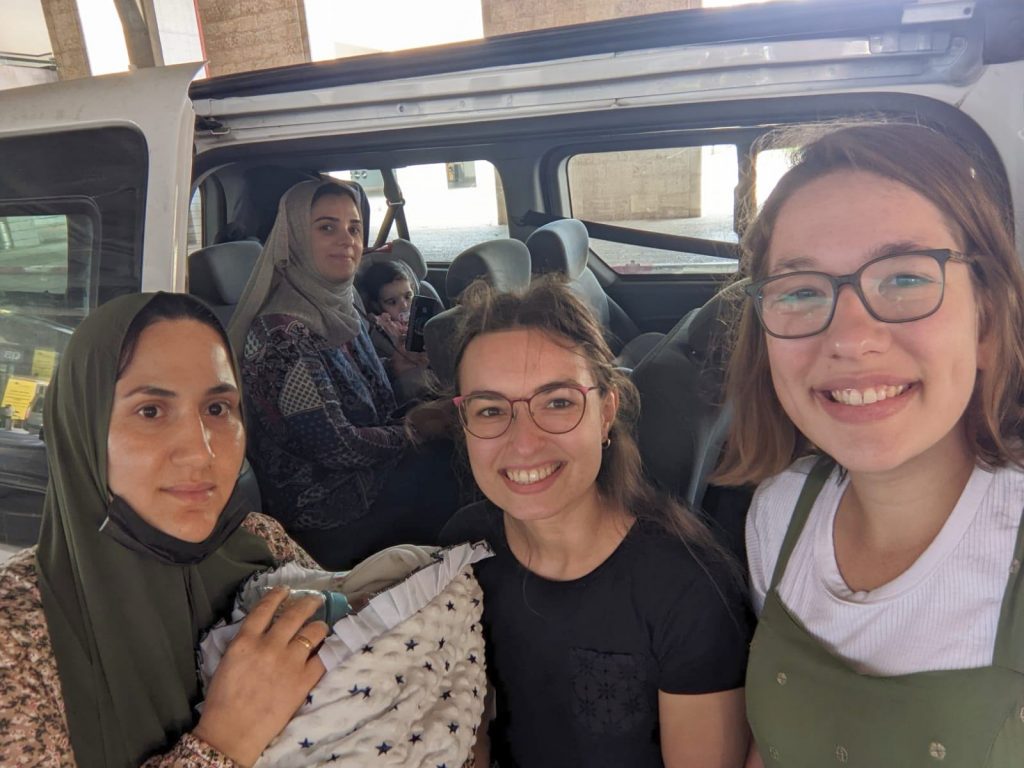 Lara landed today in Israel with her mother (seated above in van). We praised the Lord immediately when we found out that the mother speaks English very well. She is a very nice woman and she has another son at home.

After some hours when the mother and Lara settled in our house in Ashdod, Lara had an episode where her oxygen level dropped really low. The mother said this is normal, but after 15 minutes of no response from Lara we decided to take her to the ER. 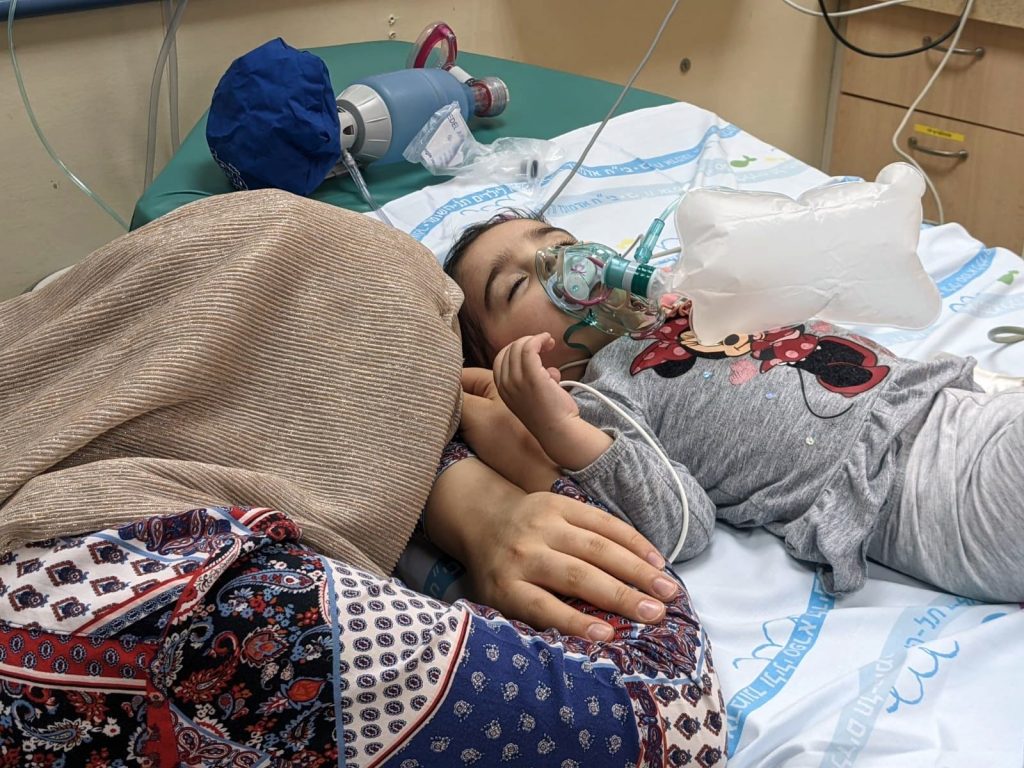 She is now admitted to the ICU in Sheba hospital. The doctors will keep an eye on her in the next days and they will do tests on her to see what they can do for Lara.

We ask for your prayer for Lara and for the doctors to know what they need to do.

We thank the Lord that Lara is now in Israel, where she can get the right medical help. 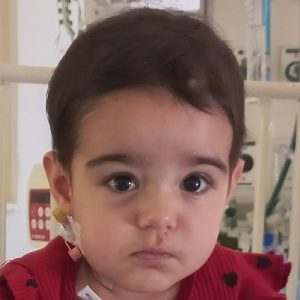 Lara is a one year old child from Kurdistan, northern Iraq diagnosed with Tetralogy of Fallot.

As of right now, Lara still needs $0 toward surgery and related expenses.