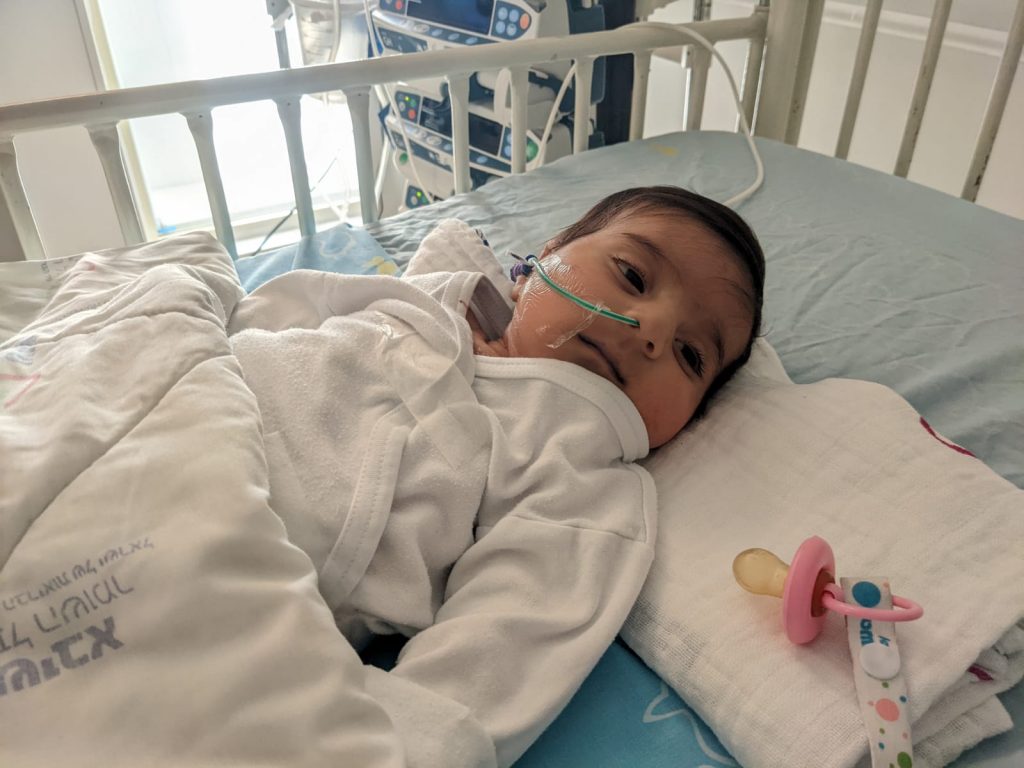 I am excited to report that Brwa is doing very well after being extubated yesterday. He is now able to breathe room air! It was lovely to see his nasal cannula gone and his cheeks rosy. Brwa’s nurse said that she expects him to be in the hospital for at least another week. Brwa’s mother seems to be growing in spirits as each day passes with Brwa doing well.

As a new volunteer, I heard about the unsure outcomes for children coming off the ECMO machine. I am thrilled that the first child I met who was on ECMO is doing so well and improving each day. Praise the Lord for Brwa’s resilience! 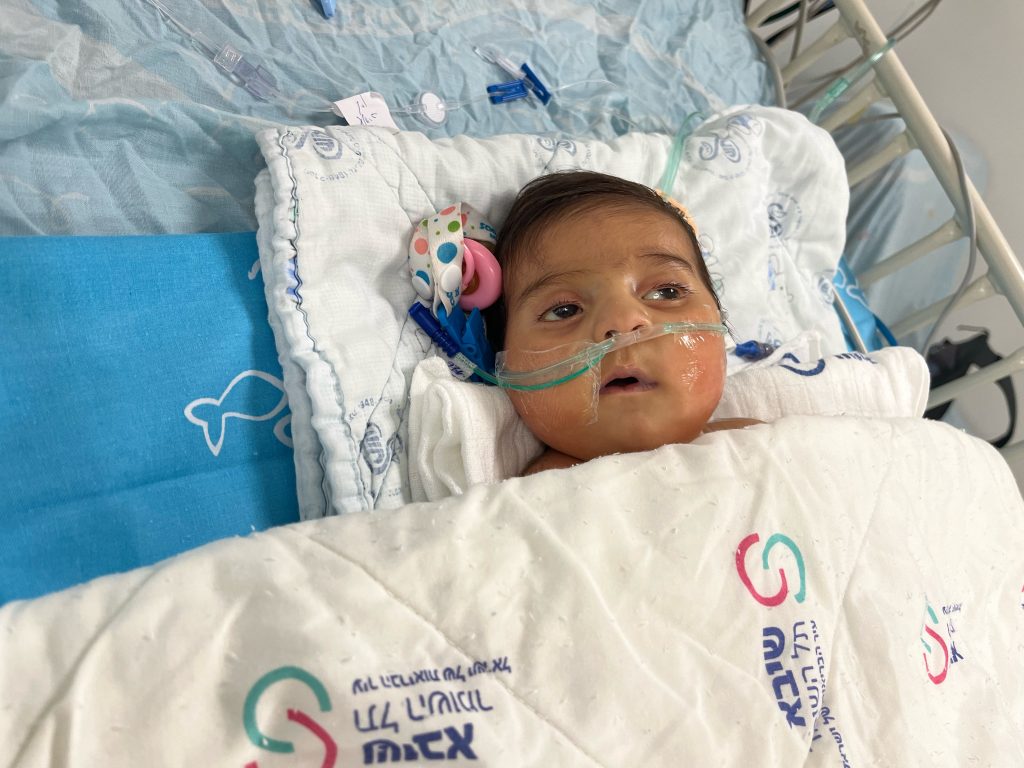 My coworker Tatiana and I visited Brwa at Sheba hospital. He is extubated now and doing really well, even though he still has a little bit of fluid in his system. The doctor said he is glad to see the strong recovery. All that showed on his mother’s face, and I was happy to see her more relaxed, still vividly remembering the despair she had to go through after the complication on the long surgery day. 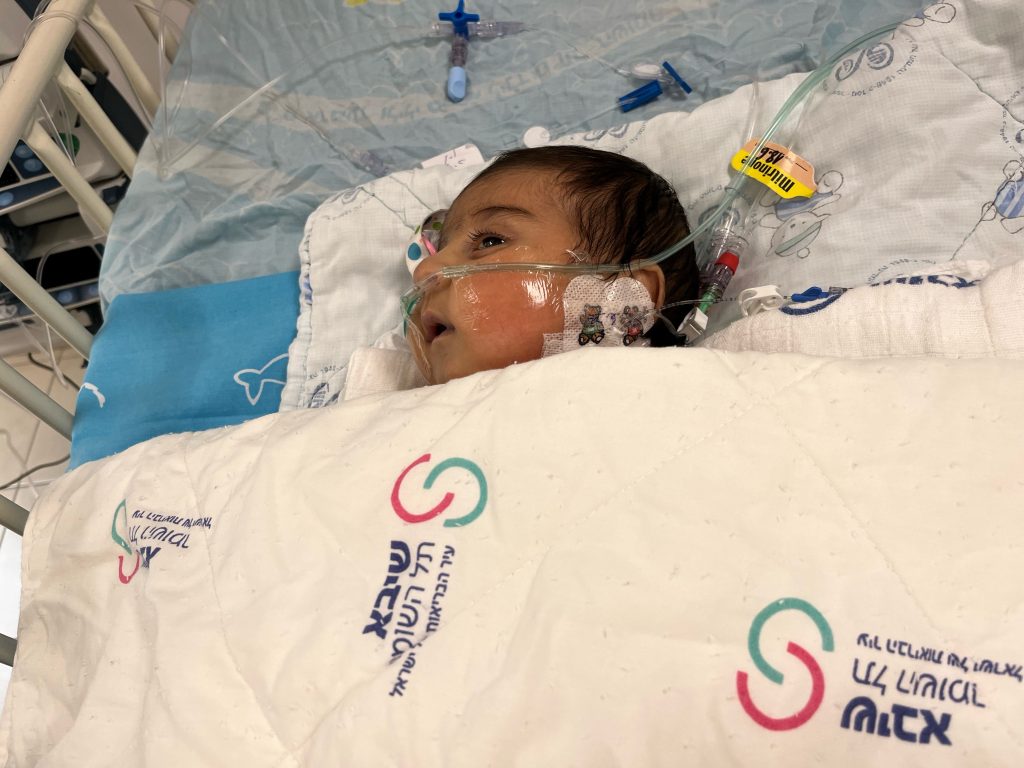 Blessed with a steady improvement after coming off ECMO, Brwa will be a powerful hope for all those children who would have to be placed on it in the future. ECMO was a scary word for us, but not any longer! Praise the Lord for this hope He gave us! 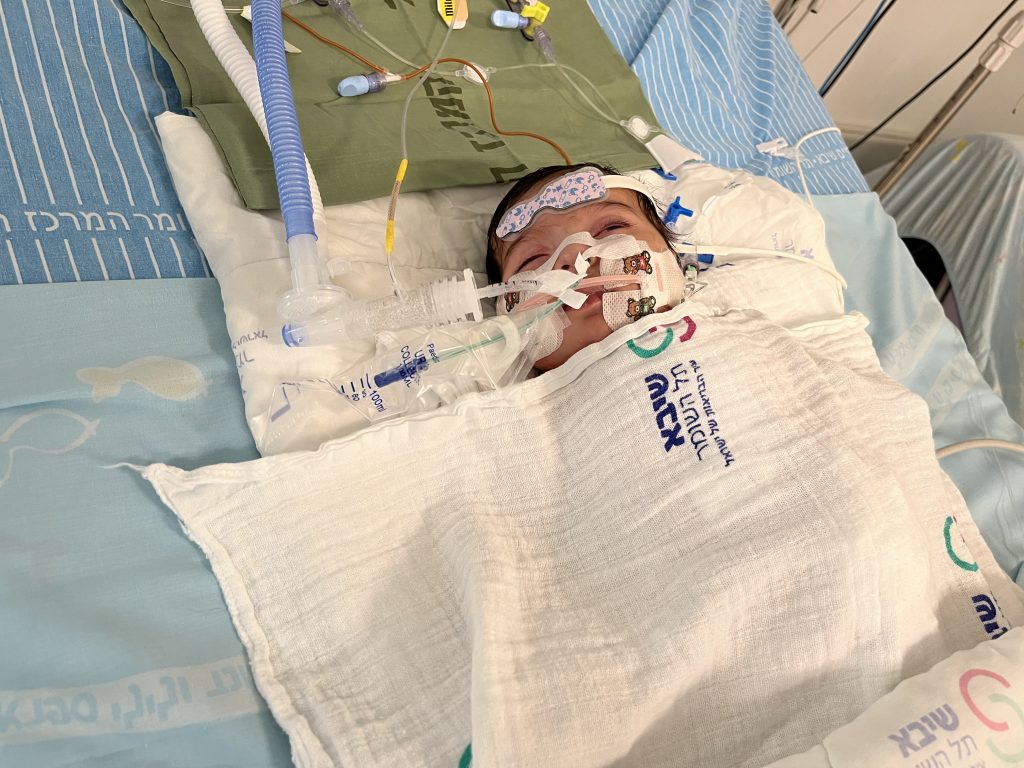 Today,  coworkers Tatiana, Margarita and I visited Brwa at Sheba Hospital. It has been a week since he came off ECMO, and has been stable since. His mother told me with a smile that his fluid levels are diminishing and wetting his diaper so that’s a good sign.  Her biggest joy was to see him open his eyes.  I do not speak Kurdish, but you do not need any language to communicate this kind of joy. 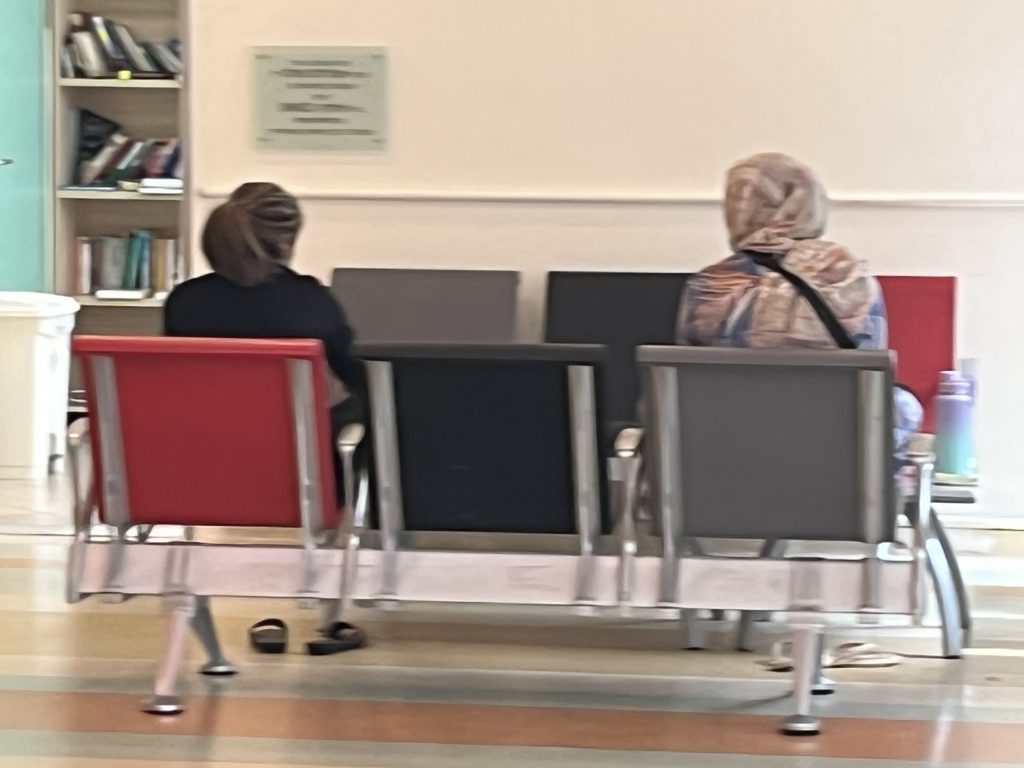 Brwa’s doctor said medications for pain and sedation have been discontinued. When I came into the hospital room, Brwa not only had his eyes open, but was looking around the room curiously. Thank you Lord for blessing him with a good recovery.

Today, also in Sheba Hospital, another child from Kurdistan had a diagnostic cath and his mother was in the waiting room too. Brwa’s mother, sitting right next to this other mom, gave her calming words of encouragement because she was in the same place herself two weeks ago, patiently waiting for the seven-hour long surgery to be finished for Brwa. It is a beautiful thing when God sends someone who can truly understand what you are going through. 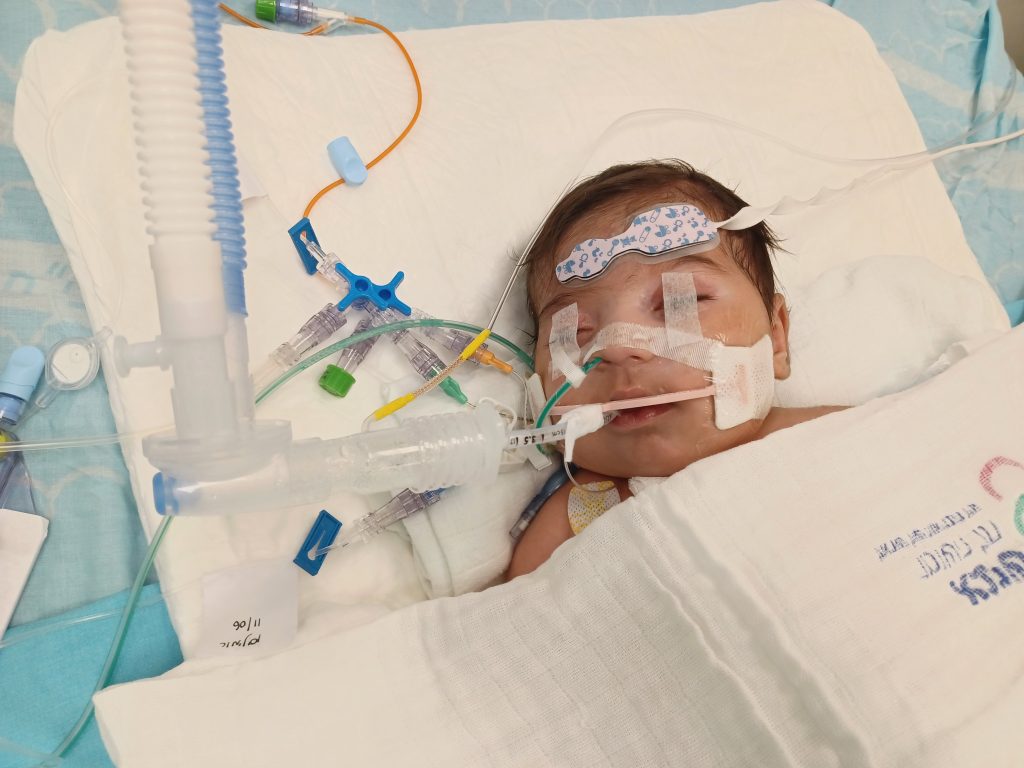 Today when I visited Brwa, a nurse was emptying a bottle that collects all the fluid from Brwa’s stomach. She told me that Brwa is getting better in baby steps. Especially for a baby who was on the Ecmo-machine, he is doing good. The stomach of Brwa is still swollen and full of fluid, but the nurses and doctors work hard to get rid of it. The mother is so thankful to God. When she heard her son was on the Ecmo-machine, for a moment it seemed that she lost hope. But now she is thanking God every time I see her for the improvement of Brwa. God is good! Please keep praying for little Brwa.
Hide Comments Show Comments 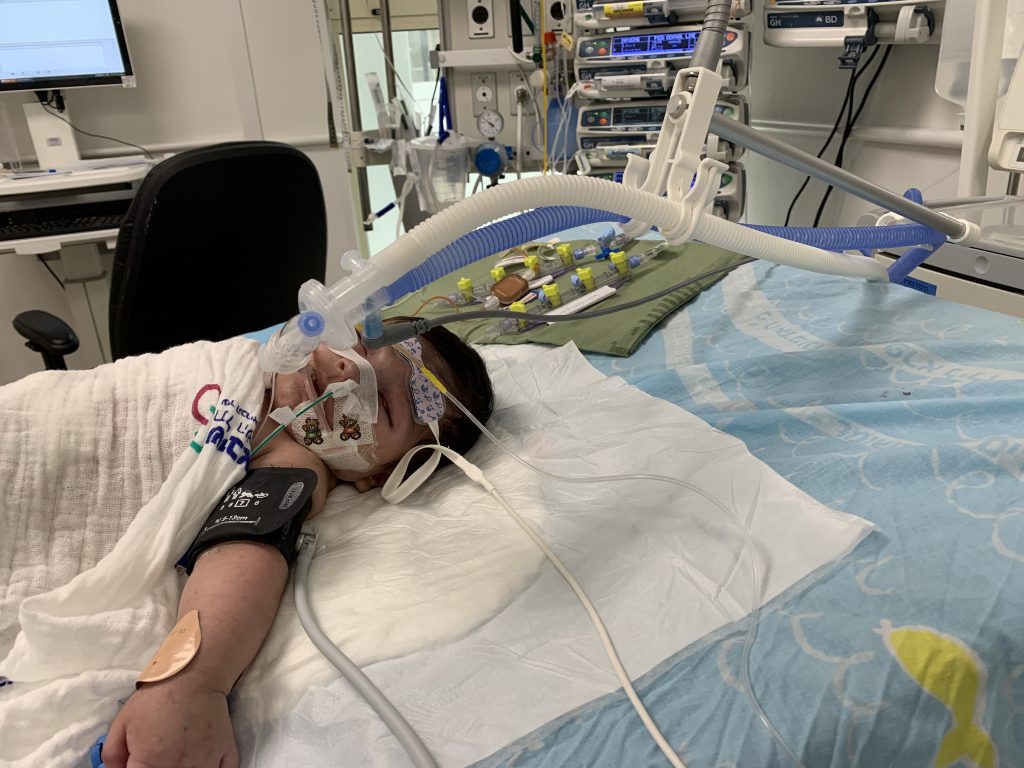 Today, I went to visit Brwa and his mother at Sheba Hospital.  The doctor told me that his situation is the same, but he did lose some weight from draining the fluid from his heart!  However, we still need to wait for him to lose more weight.
Brwa’s mother and coworker Tatiana and I visited with each other in the hospital for a bit, she is a bit anxious. We pray Brwa will get better, and that the fluid will leave his body soon.  Please also pray that all the anxiety would leave his mother.
Hide Comments Show Comments 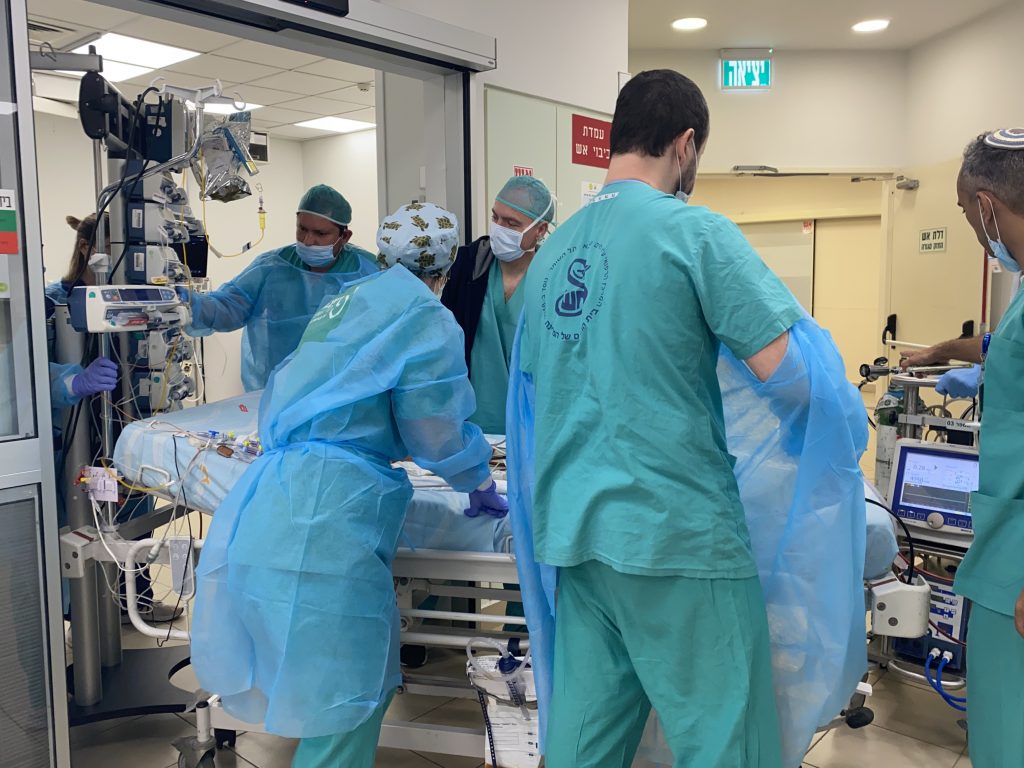 Brwa was successfully removed from the ECMO machine; the surgeon and doctor are optimistic about his quick surgery. 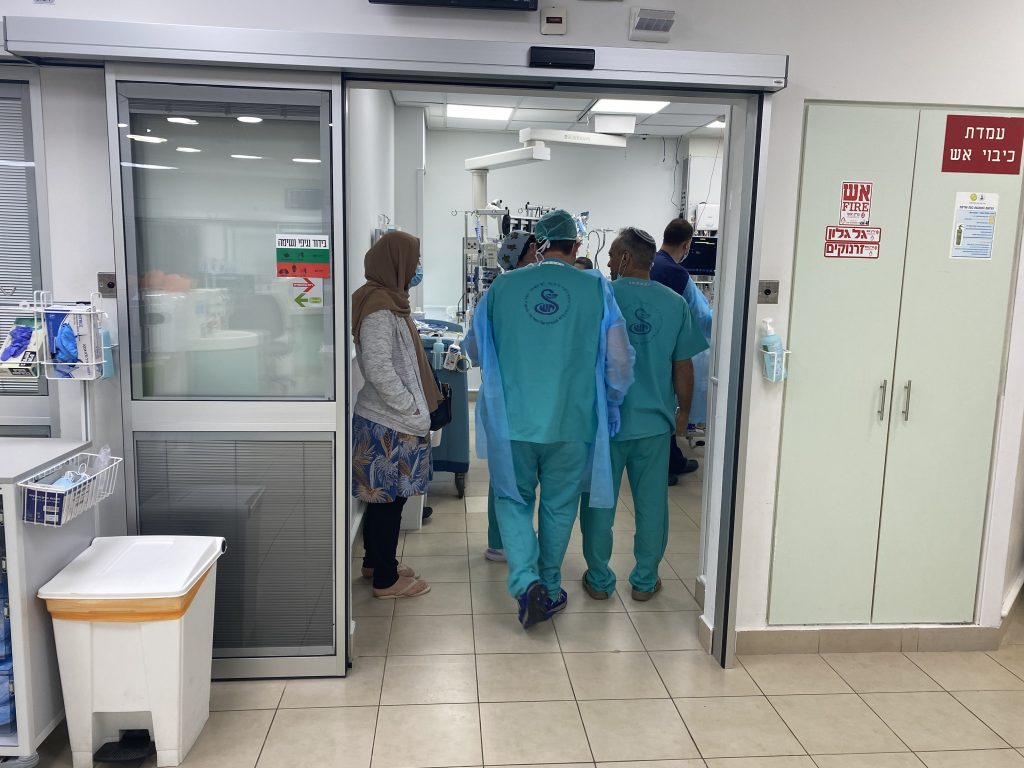 The doctor said he was happy because they had success with closing Brwa’s chest. The doctors are positive about the possibility to remove Brwa’s oxygen support in the next days, if his improvement and strengthening are enough to do the procedure.

Pray for Brwa and his mom who was nervous today while we were waiting. The doctors recommended she walk outside the hospital and take care of herself. 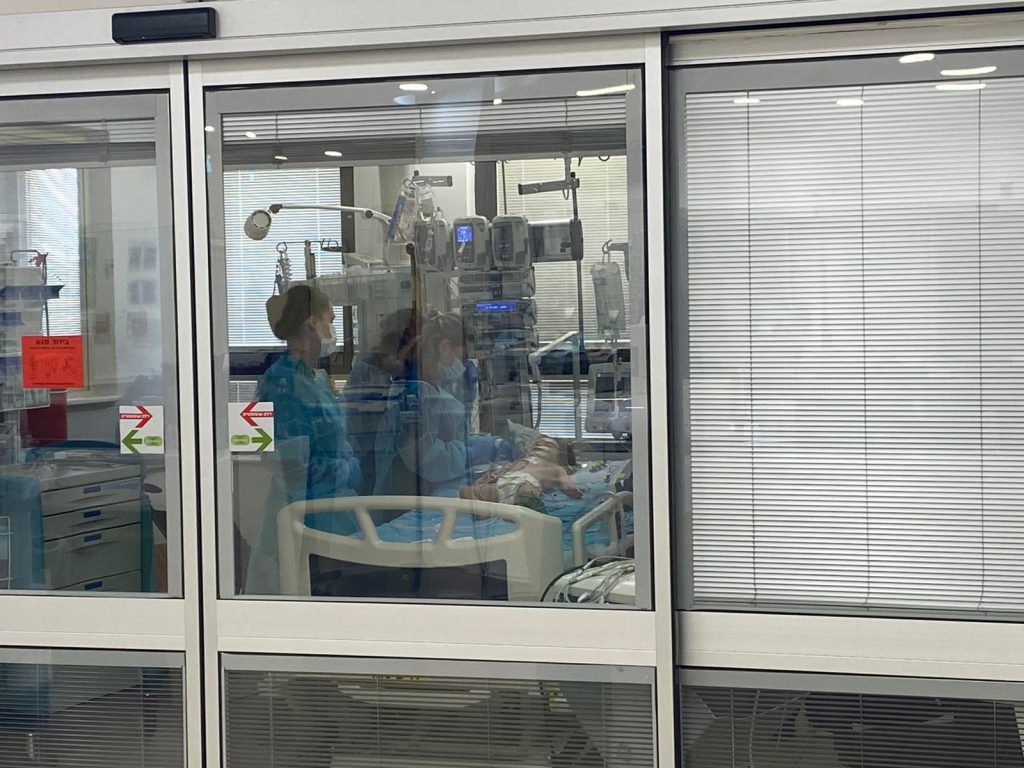 Since yesterday, there is no change in Brwa’s condition. He is not better and not worse. The doctor did say that they are going to give him another kind of medicine to see if this will help him improve.
Brwa’s mother is very strong. Yesterday was hard for her after hearing the news that her son is on the ECMO. Today she was doing better. She was eating and sleeping and calling with her family.
In this situation of not knowing if Brwa will become better or not, I pray to God that he will hold Brwa in his hand. Bless the doctors and nurses at Sheba Hospital, for their work is never in vain.
Hide Comments Show Comments 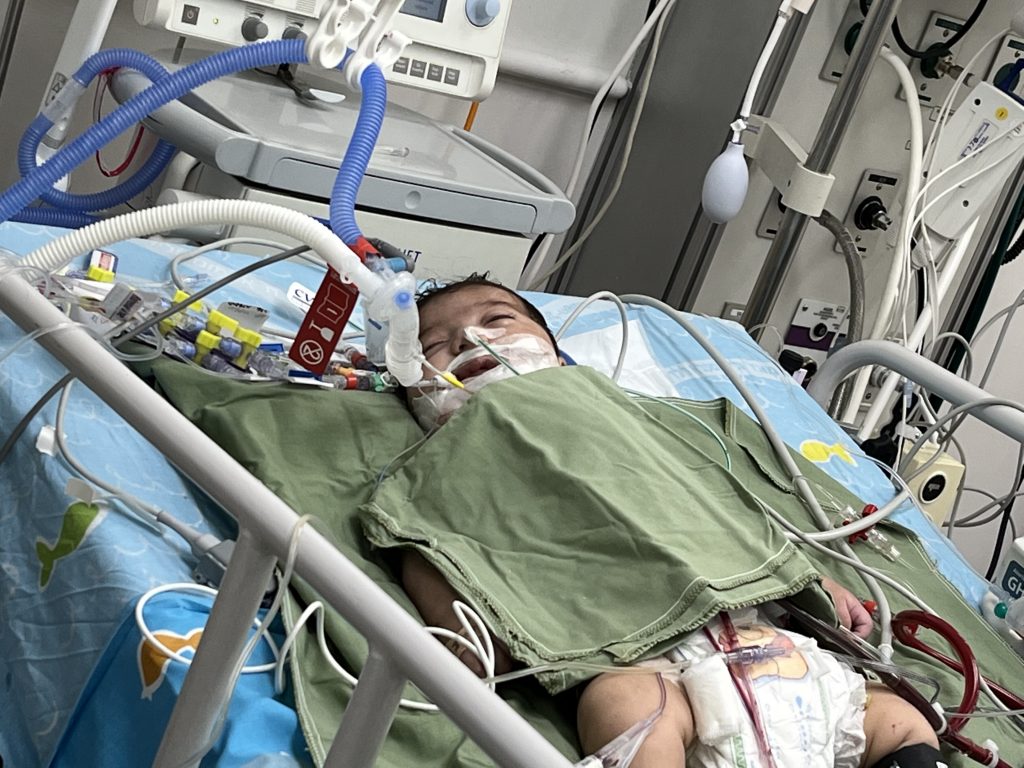 Our brave little Brwa had a surgery at Sheba Hospital today.  The doctor said everything went smoothly until the last part, when he had a little trouble as the left part of his heart was not pumping well. The doctor decided to place Brwa on ECMO as a precautionary measure after reading the echo.  The doctor said he is optimistic because Brwa was doing ok even without the machine for a whole hour, which was a good sign. The doctor wanted to understand exactly why his heart was struggling, so Brwa had a CT scan post-surgery. The result was good, and Brwa stays on ECMO for a while to give his heart a little  rest so that it can do its work when it is ready.

I do not understand Kurdish, and there was not much I could do for Brwa’s m0m.  I just prayed to God while she was calling Allah’s name, crying out loud, and watching a doctor with a kippa doing his best for Brwa.  Brwa is tiny, but is surely a fighter! Lord, bring a new morning and let his heart beat strong. 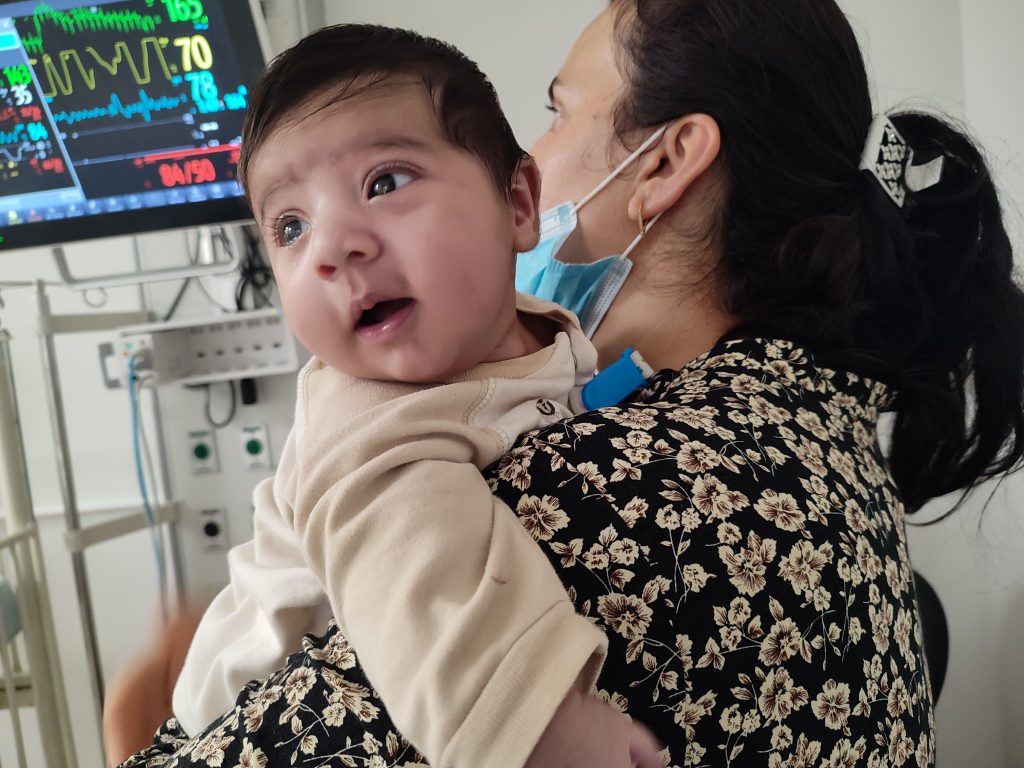 Our cute little Brwa, who arrived not so long ago, will go into a big heart surgery tomorrow at Sheba Hospital.

The doctors plan to switch his aorta and pulmonary arteries and repair the holes in his heart. This is a lot to fix, so the doctors might decide to separate it into two surgeries. 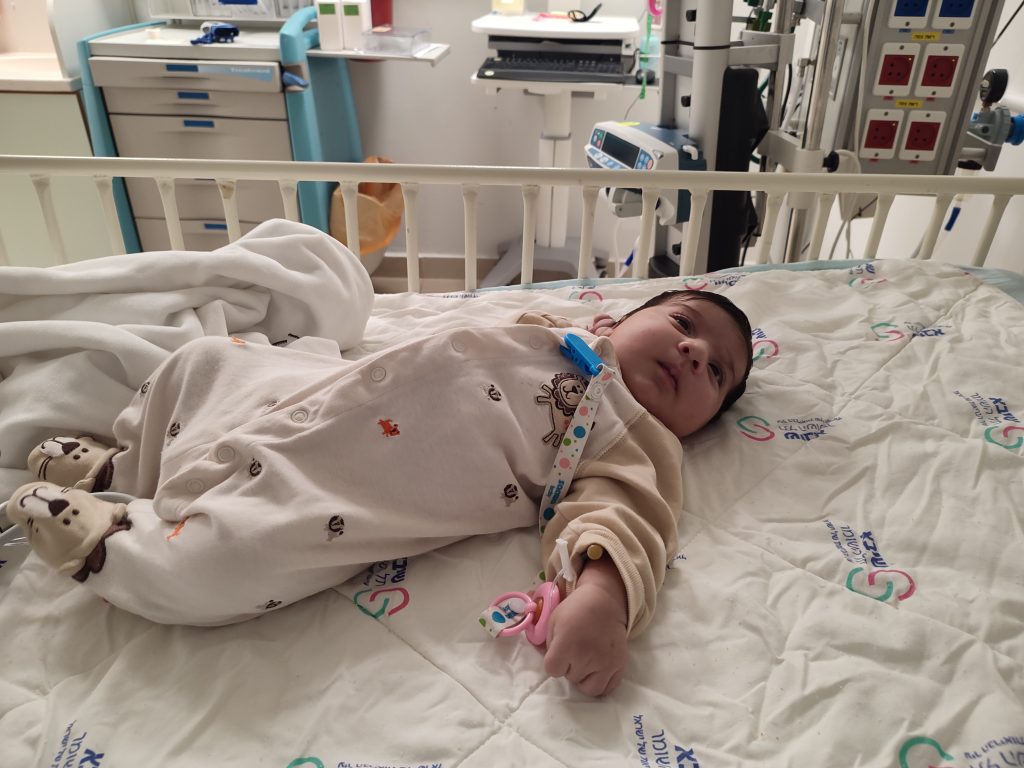 It’s really good that Brwa can have his heart surgery so young. Also, his mother is wonderful and cares about her little darling boy. We pray that this big surgery will go well for cute Baby Brwa! Please join us in prayer for Brwa and his mother. 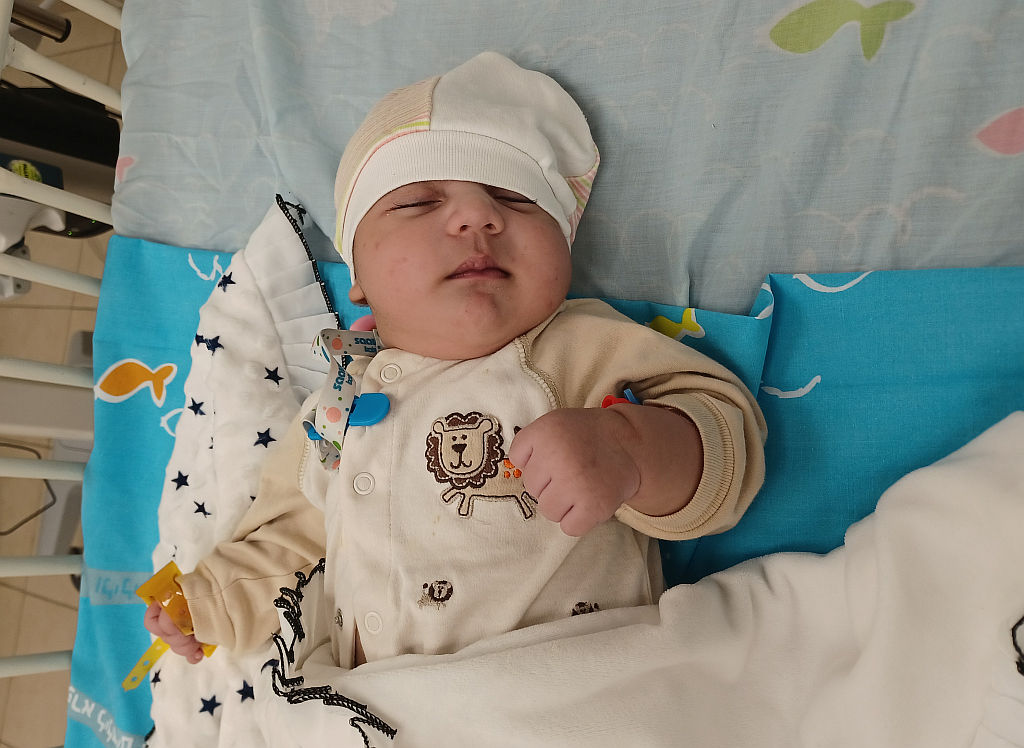 Brwa had a CT-scan today at Sheba Hospital so the doctors can see better what his heart problem is. Because he is so tiny and he is not in a good condition, he went in as one of the firsts and afterwards he was brought to a special recovery room and monitored for two hours. The doctor brought us to the children’s building and then Brwa was admitted to the ICU for surgery either tomorrow, or in two days. 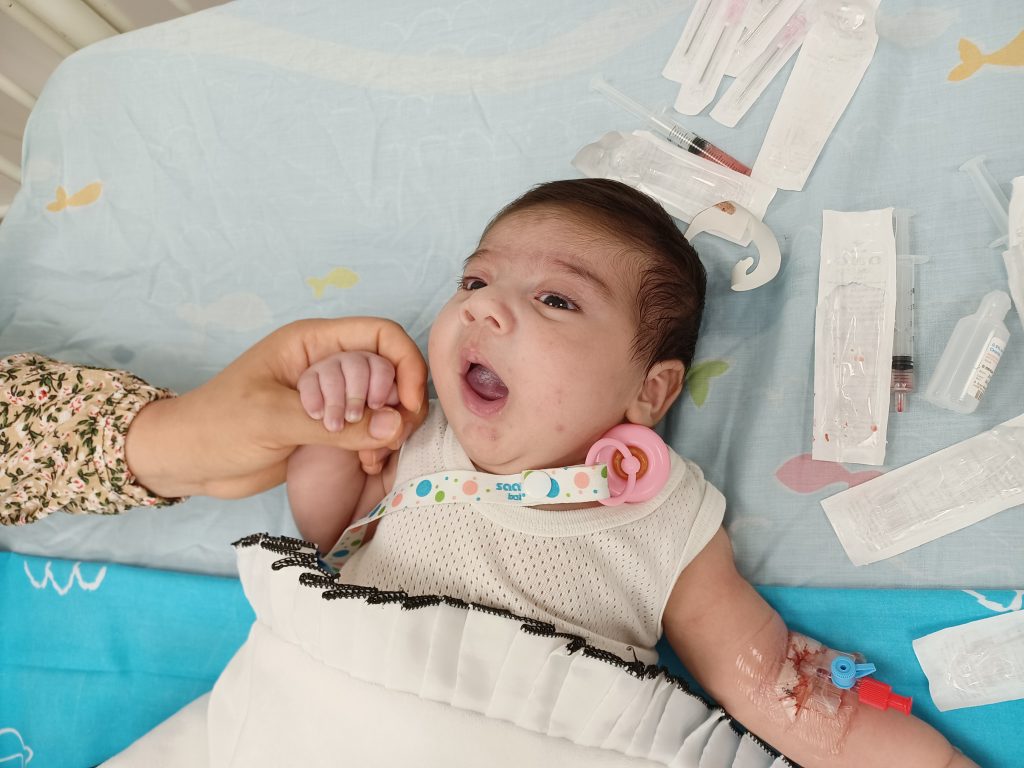 They took a lot of tests: oxygen, blood pressure, blood test, x-ray, ultrasound etc. For Brwa’s mother, it was overwhelming because Brwa had to cry a lot and she cried with him. The nurse told her that she is sorry, but it will be a longer and more difficult journey then this. She also said that the doctors will do everything to help tiny Brwa; they will fight for his life. It gave the mother a smile on her face.
After the long day, she dressed Brwa nicely and warmly in the cold ICU, so he could take his well deserved nap in comfort. Please pray for this little boy.
Hide Comments Show Comments 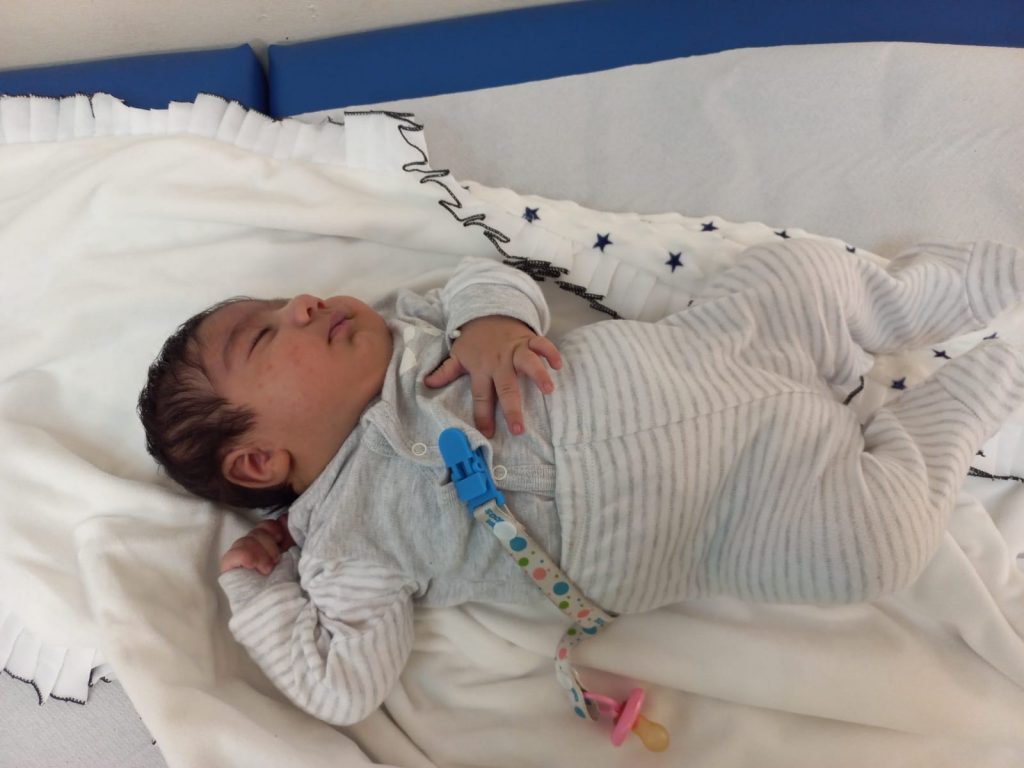 We took cute little Brwa to Sheba Hospital for a blood test today. We had a little trouble checking him in with the printer not working at the nursing station  and all, but Brwa stayed calm and content all the day. 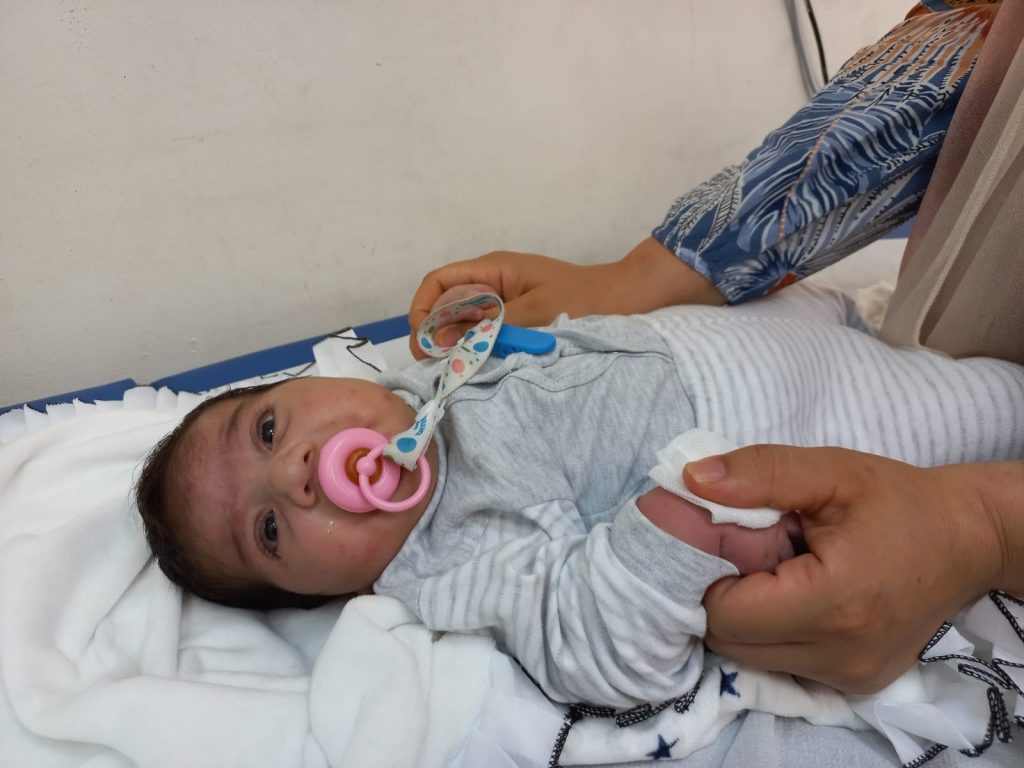 The nurse had to poke his tiny hand twice in search of a good vein.  He cried a little, but the pacifier with a little sugar on it helped.  After the second try, the nurse was getting a good flow of blood to fill the two tubes, while Brwa’s mother was gently holding his arm. Brwa was so brave to stay calm.  We are so proud of you, Brwa! After the blood work, we drove down to Ashdod safe and sound.

Lord, please protect Brwa and his mother and make the appropriate surgery happen at your appointed time.  Please bless them as a part of the Shevet family, so that they can make themselves comfortable.
Hide Comments Show Comments 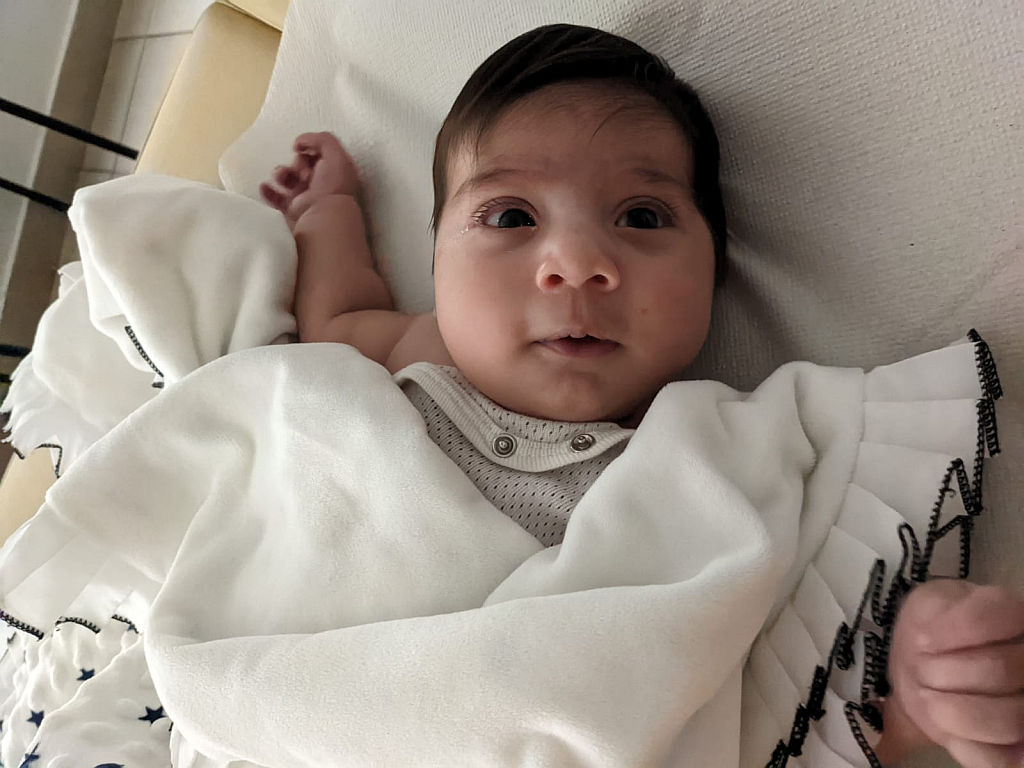 Brwa had his first evaluation at Sheba hospital today, including an ECG and two echoes. He’s a sweet, sleepy little guy and was quiet and content for most of the process. He wasn’t quite sure about the first echo, but a bottle and some snuggles from his mom helped. After that, he slept right through the second echo. 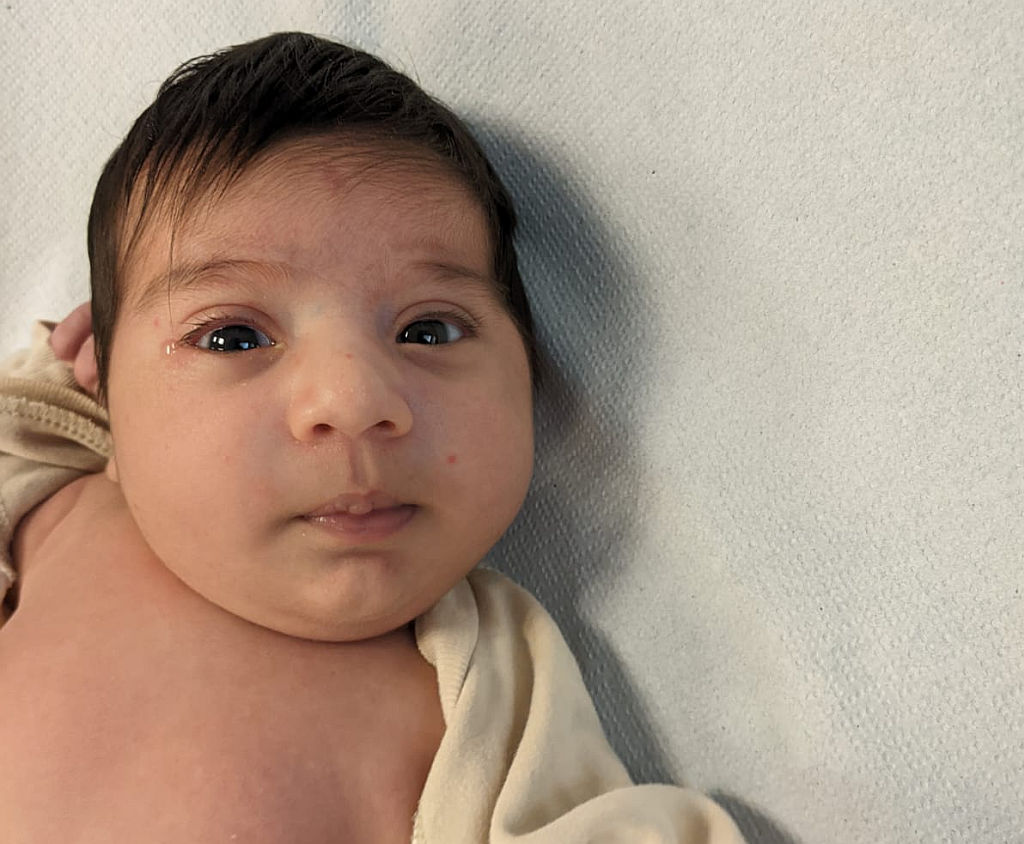 Brwa’s echoes showed that his heart is a bit complicated. His great arteries are switched, so deoxygenated blood is being carried to his body while oxygenated blood circulates back to his lungs. He also has two holes in his heart–one between the upper chambers that was created in a catheterization in Kurdistan, and one between the lower chambers. These holes are actually helping him survive right now, as they’re allowing some oxygen-rich blood to flow to the body. In addition, his coronary arteries–the small arteries that supply blood to the heart– are not formed properly and this will be difficult to correct in surgery.
Brwa needs a CT scan to help the doctors understand his heart more completely before surgery. Please pray for him and his mother as they wait for his operation.
Hide Comments Show Comments 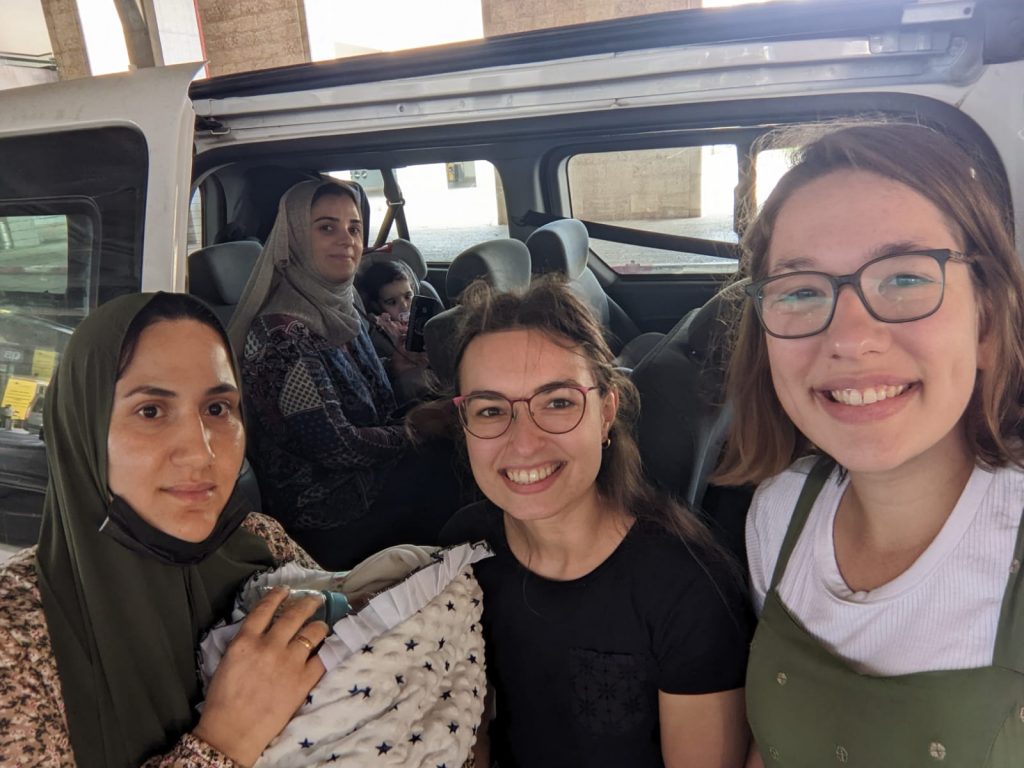 This morning, one-month-old Brwa arrived to Israel from Kurdistan with his mother. Brwa’s aorta and pulmonary artery are switched, a heart defect that can be corrected with surgery early in life.
Brwa will have his first evaluation at Sheba hospital tomorrow morning. In the meantime, he and his mum are enjoying some much needed rest at our home in Ashdod. Please pray for Brwa as he begins his treatment here in Israel.
Hide Comments Show Comments 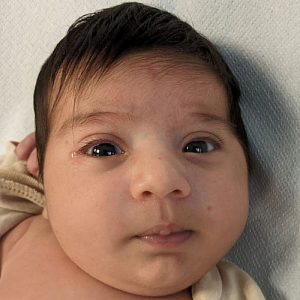 Brwa is a month old child from Kurdistan, northern Iraq diagnosed with transposition of the great arteries.

Brwa does not yet have a local leader to advocate for prayer and financial support for his surgery.

As of right now, Brwa still needs $6000 toward surgery and related expenses.