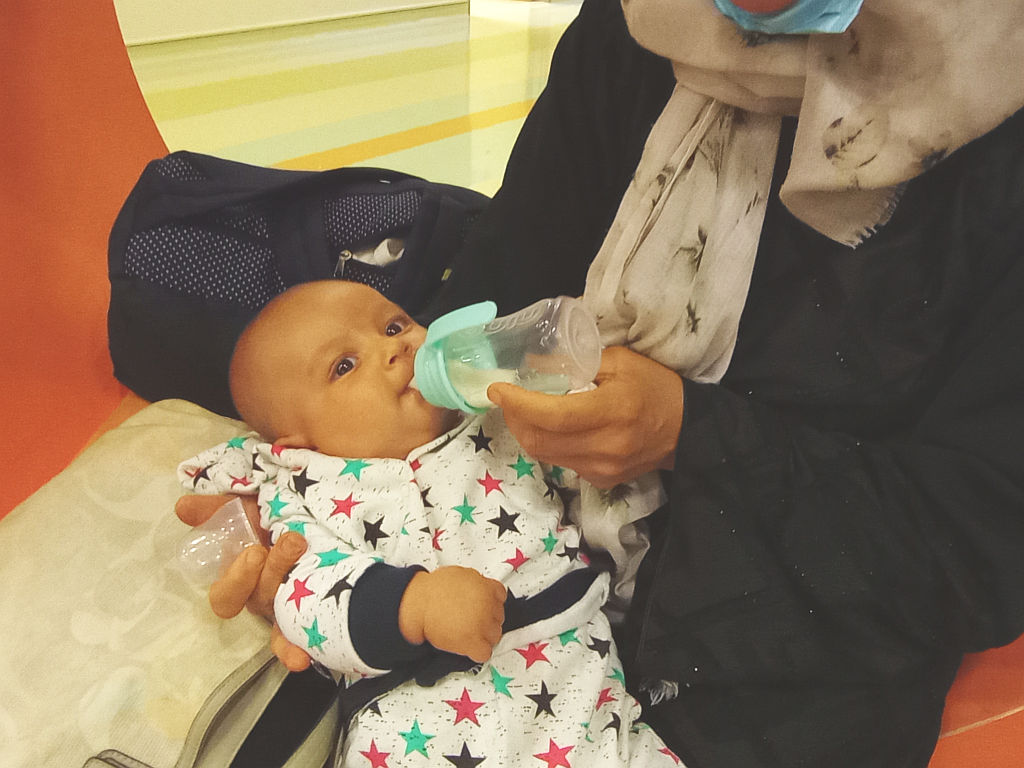 This morning coworker Jan and I picked up baby Tahsin and his grandmother at Erez. 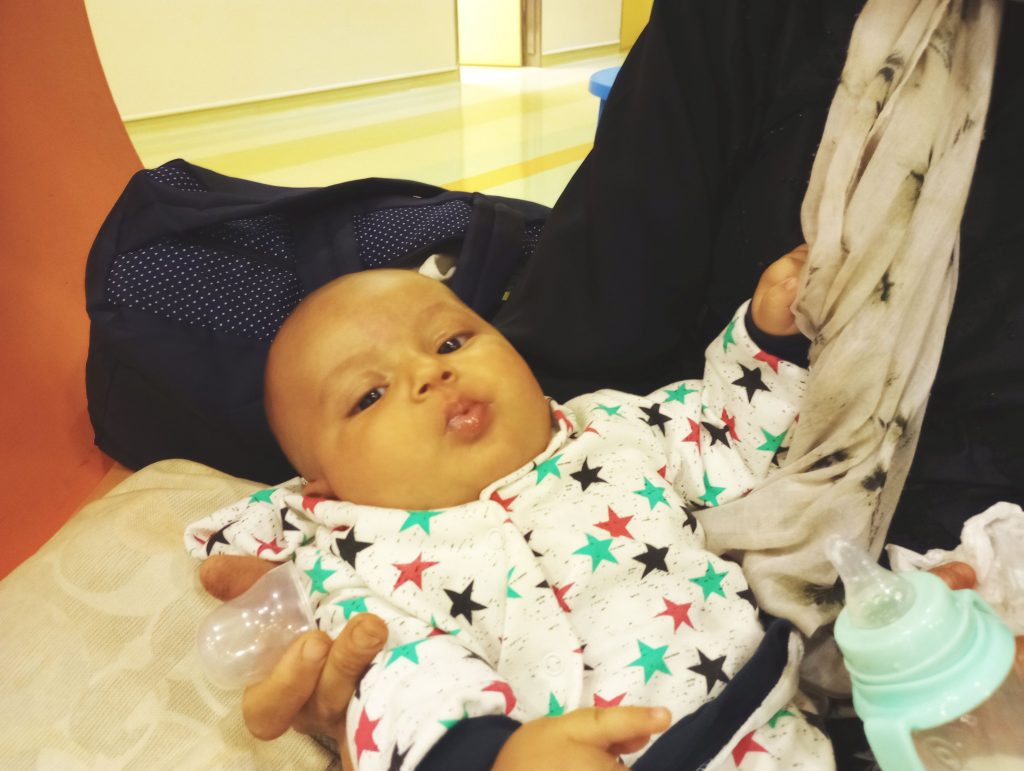 I was very surprised and happy over how big and chunky Tahsin got since he was here the last time. At Sheba hospital he had an ECG and echo today and his doctor confirmed that Tahsin is doing very well. He is such a cute baby, we enjoyed having him in our arms a lot and are looking forward to seeing him again in six months when he comes for his next follow-up appointment. 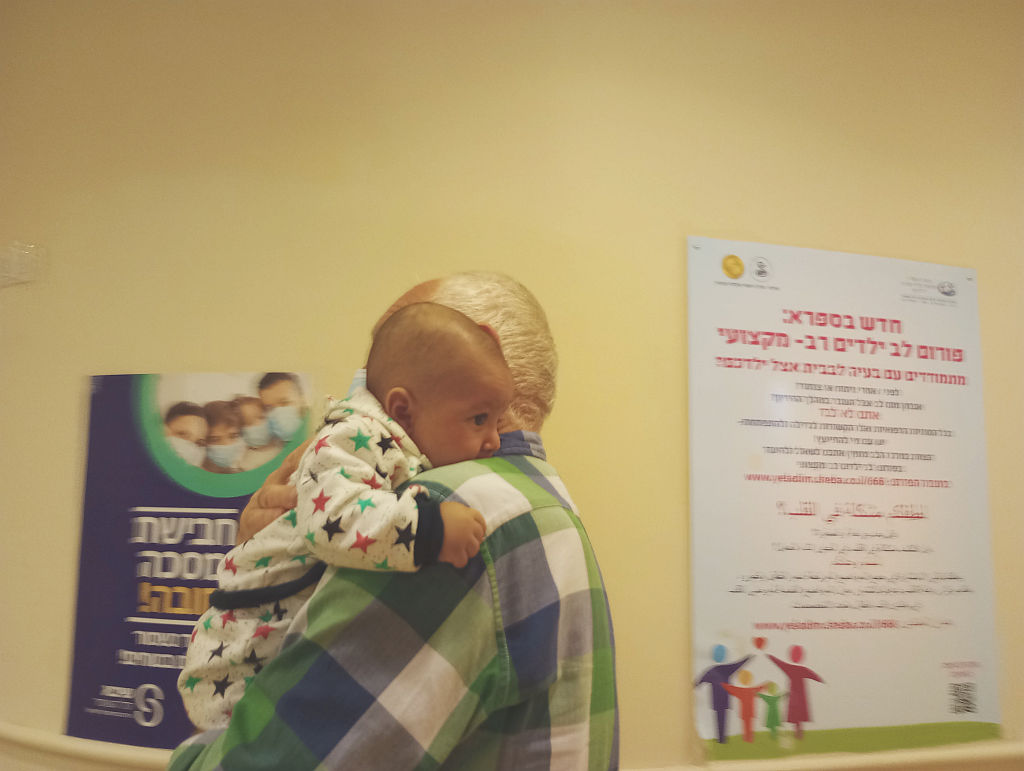 Thank you Lord that Tahsin is doing so well! 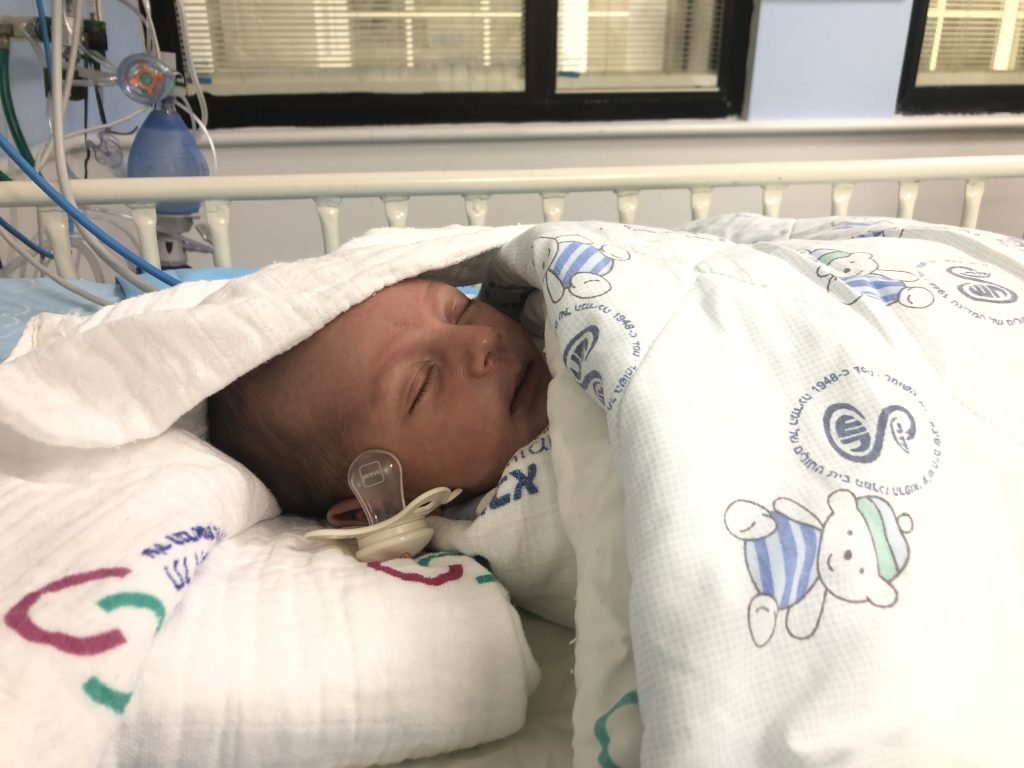 Our brave little Tahsin has been discharged today from Sheba! Only a few days ago we received him urgently from the border of Gaza. Since his surgery to widen his aorta, Tahsin has recovered steadily. His grandmother was brimming with gratitude as we made our way out of the hospital, thanking all of the nurses and other mothers in the ICU. 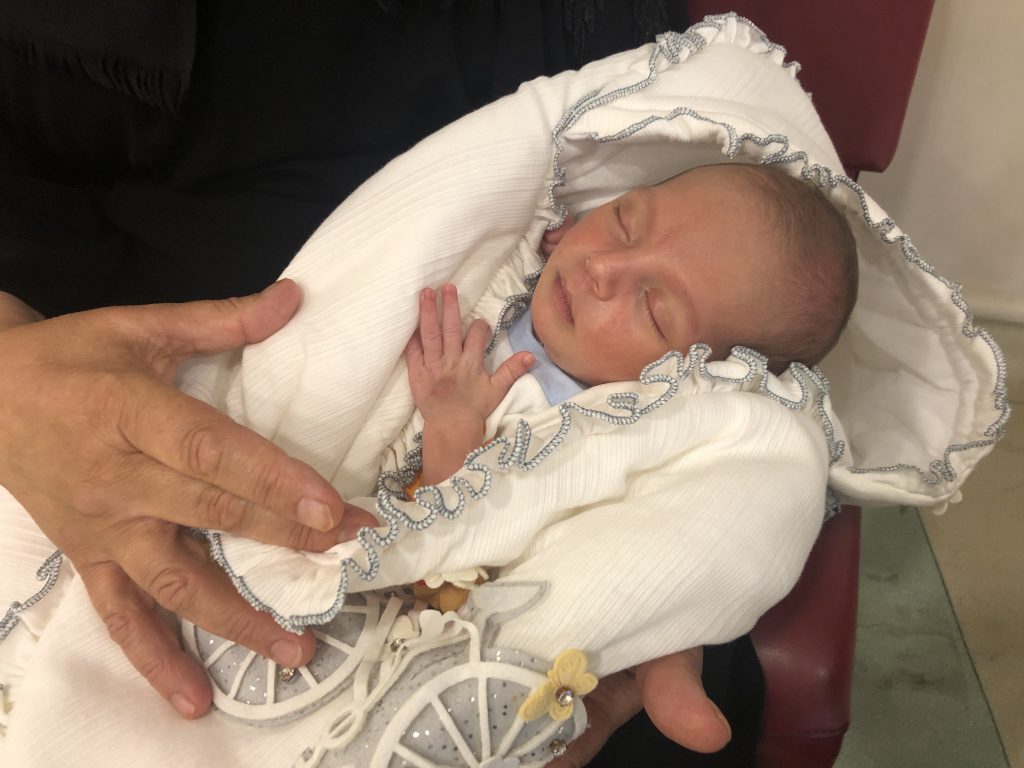 She buttoned him up in a homemade swaddle with embroidery, and off we drove back toward their home. Though he is still under a month old, Tahsin has already overcome great obstacles. We send him home with prayers that the Lord will continue to be near to him. 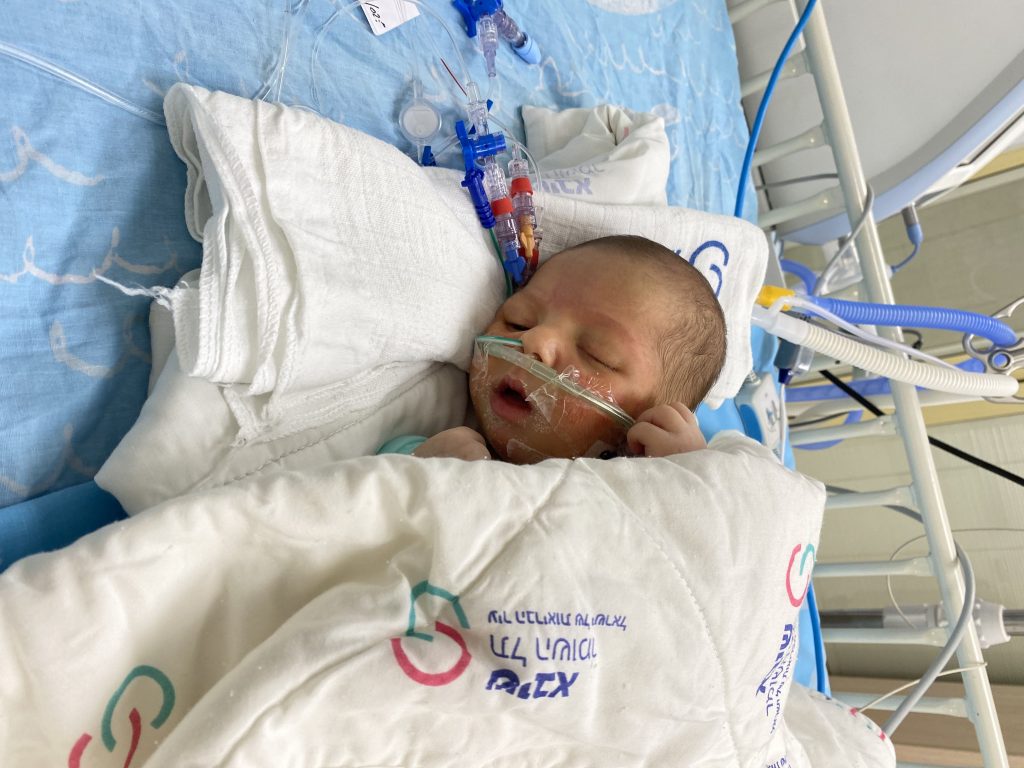 Our new born Tahsin is having a few episodes of apnea and low sugar.

After his surgery last week, the doctors removed the ventilator which helped him. Now they want to do a few tests to figure out why he has apnea and another kind of test to find out why the sugar episodes.

His process after his surgery is doing well, he is having increased feeding and is stable.

Pray for wisdom for his doctors and strength to his grandmother who stays with him.

Tahsin had a surgery at Sheba Hospital today to widen his aorta. It went very well; after three hours, he was already back into his room. The doctor told me they think they will extubate him tomorrow. We ask for your prayer for his recovery.
Tahsin’s grandmother was so thankful after the surgery for the support that she had and that the surgery went so well. When she sent a picture of her grandson to her own son, she sighed because it is not easy to see a baby in this condition. But thanks to God,  there is hope for Tahsin.
Hide Comments Show Comments 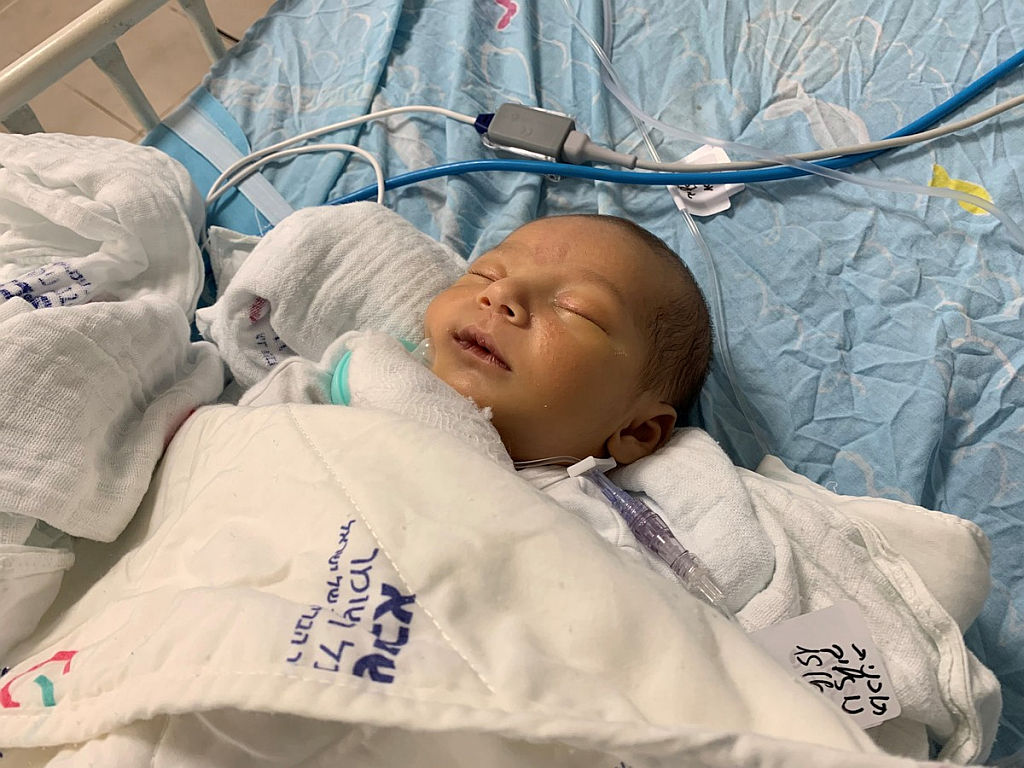 This morning, I went to visit Tahsin who was rushed to the hospital by an ambulance last night from Gaza.  The doctor mentioned that they were going to have a consultation later today with a cardiologist to see what kind of operation or treatment he needs.  They informed me that his situation hasn’t changed from last night.  I wanted to ask his parent/guardian some questions, but they were not present so I ended up leaving after watching over him for awhile.

Afternoon, coworker Junko and I tried visiting him again.  This time, his grandmother was there.  Through Google Translate, we were able to ask some questions to her.

Tahsin is only 9 days old!  He is also her only grandchild.  When we asked his grandmother if she had other grandchildren, she shook her head trying to hold back all the tears.  She ended up bursting out crying, and all we could do was mourn along with her.  We hugged her and prayed to God.  She kept lifting her arms towards the ceiling, calling out to God.  It broke our heart to see her going through this.  When we told her that we would come back to visit her again, she smiled.  It seemed a little forced, but I can tell that she found some comfort with us visiting her.

Coworker Junko and I went up to the doctor again to see if they had any new information.  They did!  They said that a vessel in his heart is narrowing, and that they don’t know how severe it is.  They are giving him a surgery tomorrow.

Please pray that this surgery would go very well and smoothly.  Please also pray for his grandmother who must be really nervous and scared about it. 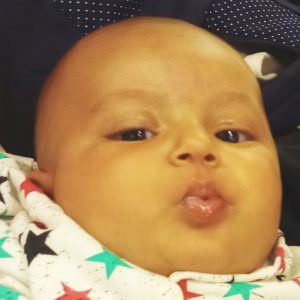 Tahsin is a week old child from the Gaza Strip diagnosed with coarctation of the aorta.

Tahsin does not yet have a local leader to advocate for prayer and financial support for her surgery.

As of right now, Tahsin still needs $6000 toward surgery and related expenses.