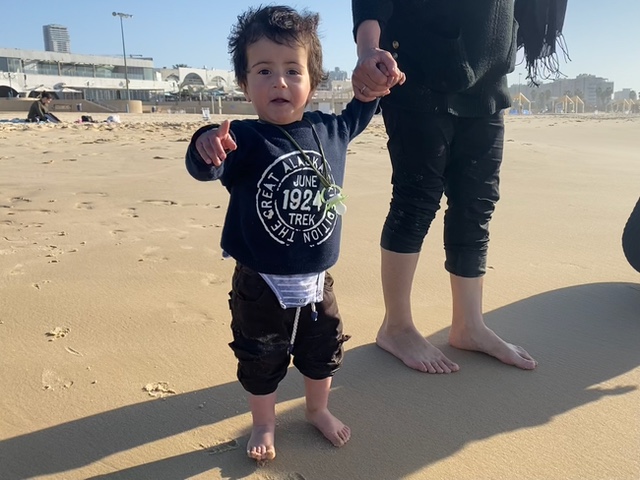 After his successful catheterization last week, Miran is now back at our family home in Ashdod.

Coworker Simona and I used the free time to go to the beach with him and other Kurdish children. How nice to see them playing so juyful. Together with the other children, Miran took a few steps into the cool water. He didn’t stay dry, but that wasn’t a problem, because we had enough towels with us. 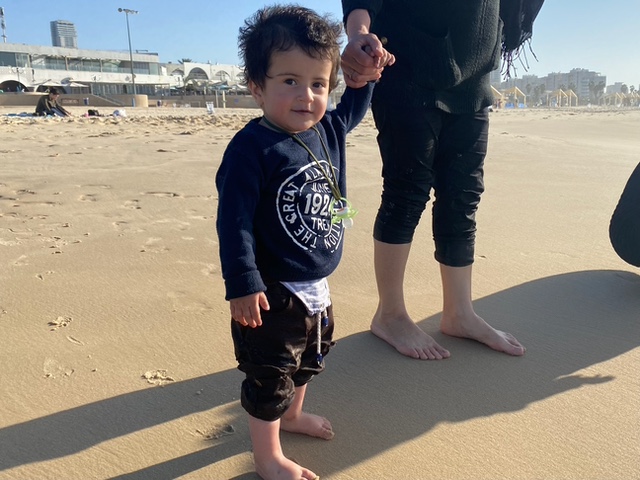 His mother seemed to be having a good time too. She took some photos with the other Kurdish mothers and had a good conversation. Thank you, Lord, for this time off and the recovery between the catheterization and the following appointments in the hospital.

Please continue to bless Miran as new challenges arise in the coming weeks. 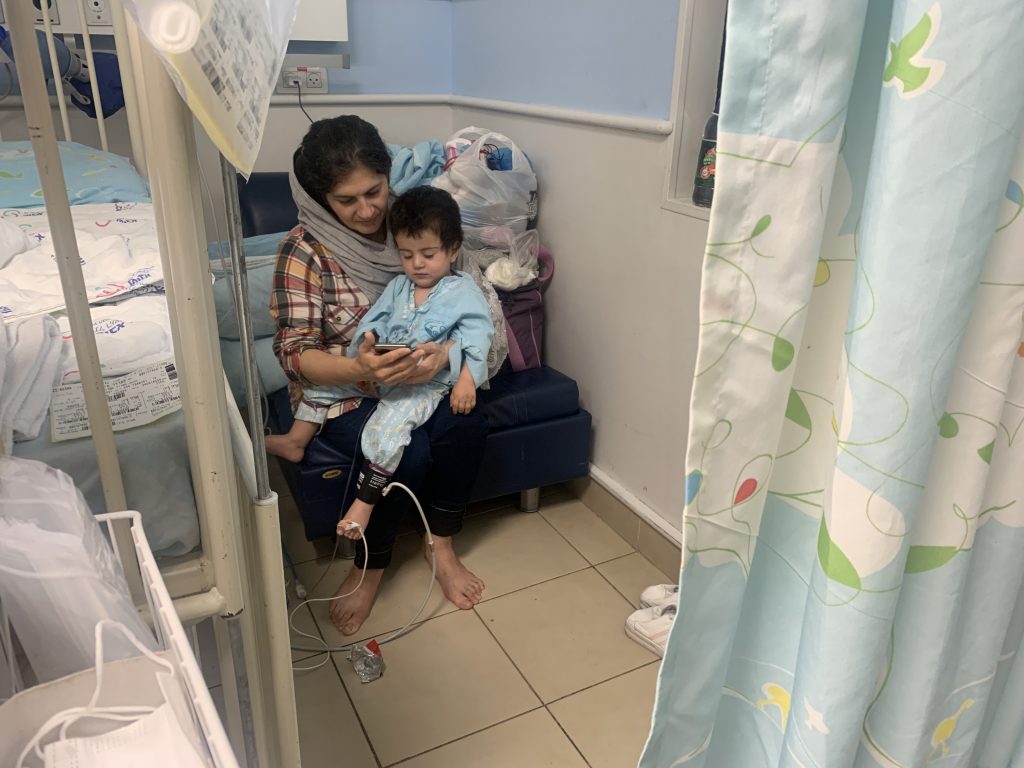 He had again an Echo which went well, so that my coworker Joanne and I were able to bring him and his mother back to our community house in Ashdod.

On Monday Miran had a few challenging appointments so I was all the more happy to bring him back to Ashdod. In ten days, he has to go back to the hospital for follow-up appointments.

Please Pray for Miran and his mother, that they have a blessed and restful time here in Ashdod. 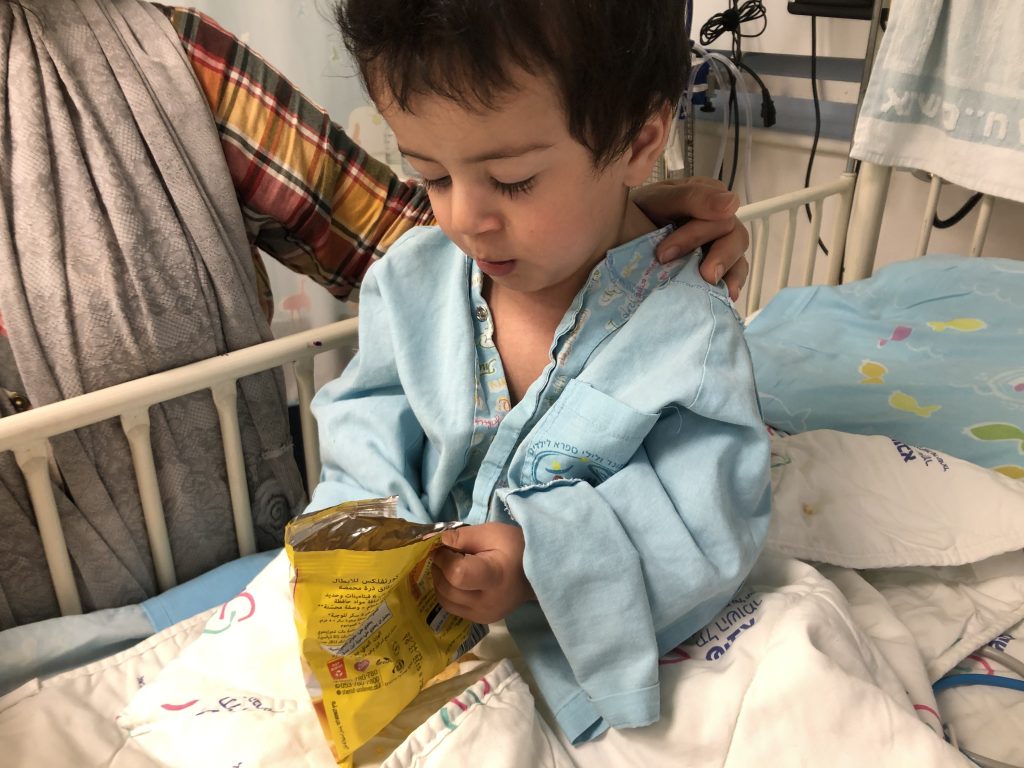 After his cath yesterday at Sheba Medical, Miran is already doing really fine. Even so, he looked a bit tired when I visited him, but was happy to eat some of the snacks the children in the ICU get. He was smiling brightly when his mom gave him a pudding which made his mom and me smile even more. For a short time we saw him also playing outside of the ward, playing in the locomotive at the playground. It’s good to see him doing well after his cath.

Hopefully Miran can be discharged tomorrow and will meet his friend, who was already discharged today, in Ashdod again, where both of them will be staying with us until their treatment continues.

Please continue to pray for Miran, that he can grow up like any other child. 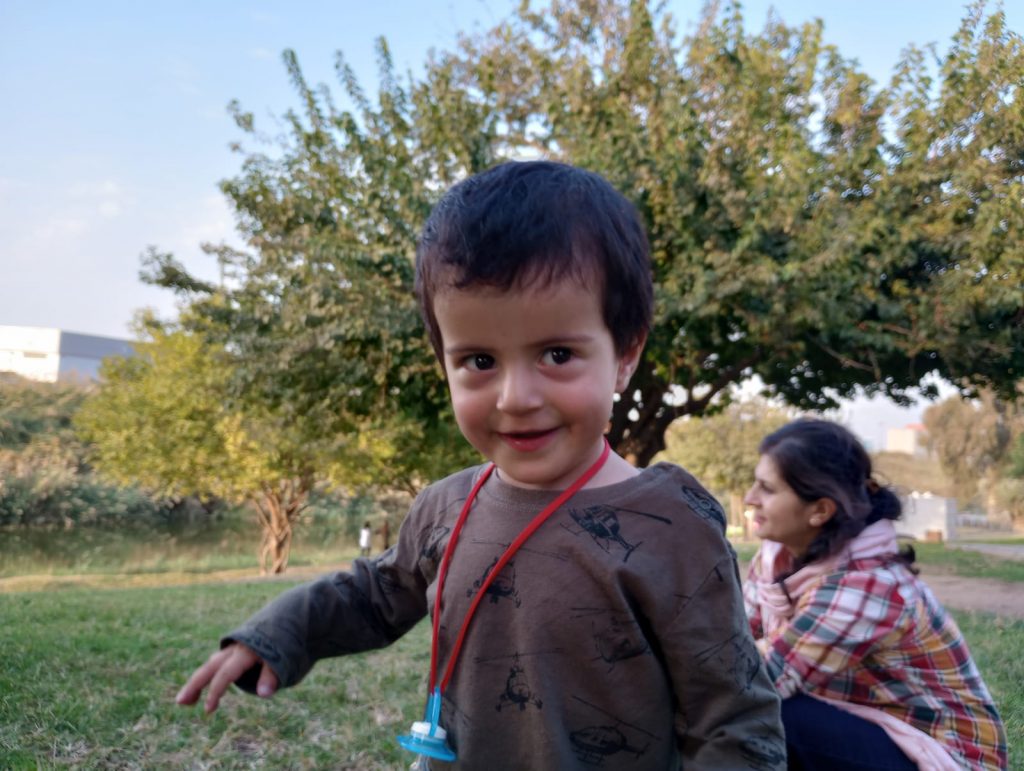 Little Miran had his catheterization today and by the time Craig and I arrived at Sheba Hospital, he was already in the middle of it.

We eagerly awaited the results. When I approached the ICU and heard him crying, I was a little concerned at first. However, the nurse was able to calm me down. His catheterisation went well and he can probably return to our family-house in Ashdod tomorrow, together with his Kurdish friend who also had a catheterisation today. Thank the Lord for protecting Miran so well today. 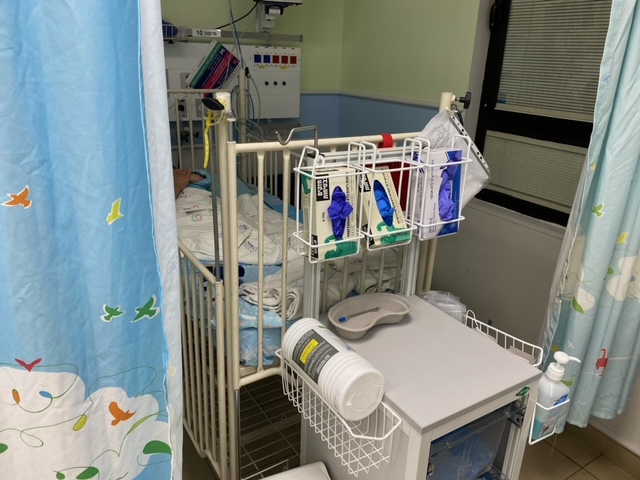 In fact, Miran stopped crying as soon as there was no more doctor in the room and his mother looked relieved. When I wanted to sit down with the two, Miran started to crying again. I guess I looked like a doctor to him with my face mask on. So I quickly left the room again. This is also the reason why Miran is not in the picture. Instead, you can see a photo from a while ago above. After the catherisation, his brown eyes shine just like in the old picture.

Hide Comments Show Comments
Today, I accompanied Miran and his Mother to the Sheba Medical Center and walked with them through all the steps for the admission. First we checked in, Then Miran and I had some play time. We explored the waiting area on floor four. After a while, it was our turn to be seen. 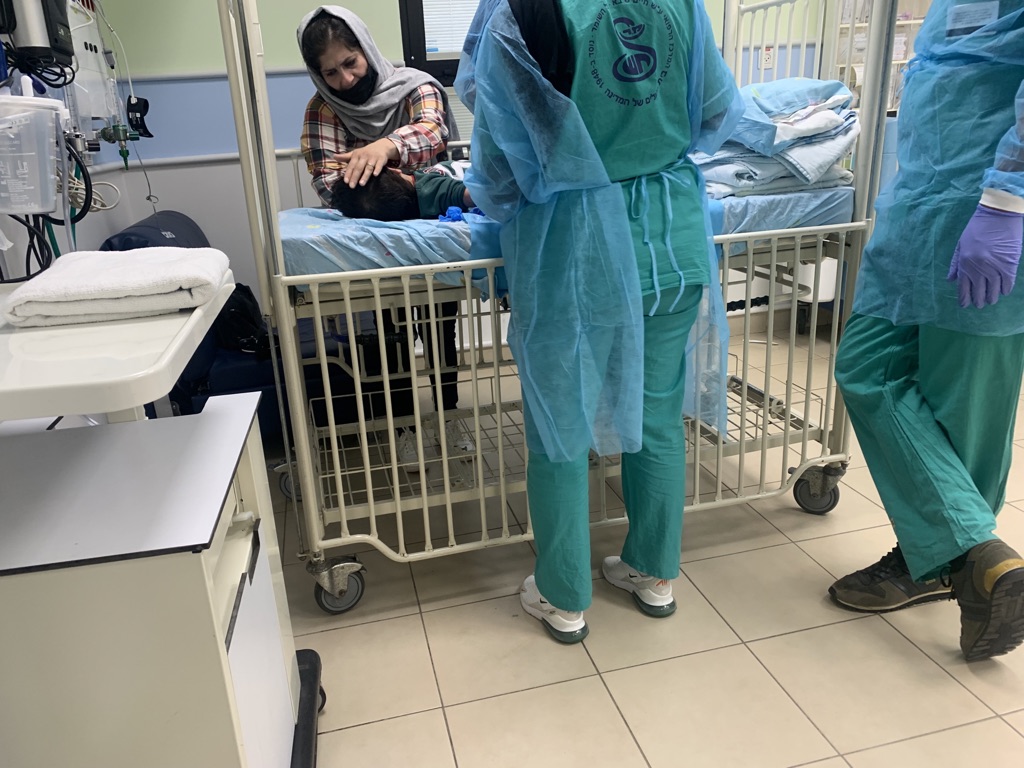 His weight and oxygen levels were measured and an ECG was done. Then we made our way to the X-Ray station, which went quickly. 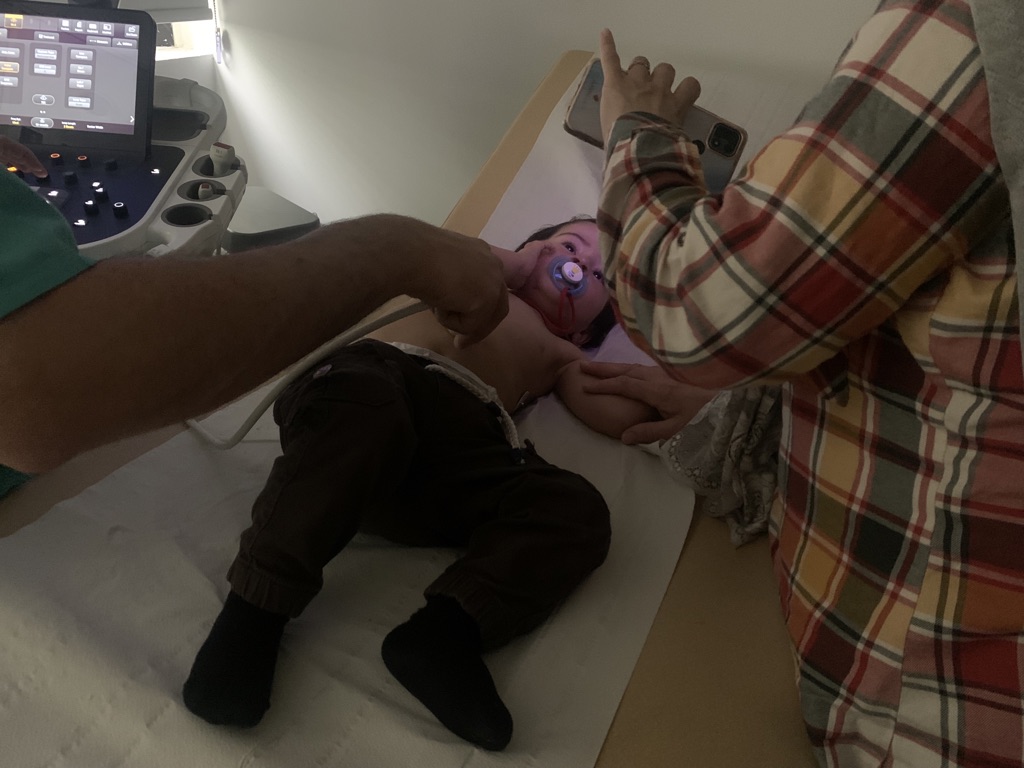 Afterwards, we went back to the waiting area on floor four. We had a play and food break. After a time of waiting, it was Miran’s turn for his Echo. The Echo was a big challenge for him. He was very insecure and scared, so he cried a lot. His mom and I tried to calm him down and distracted him with the phone. 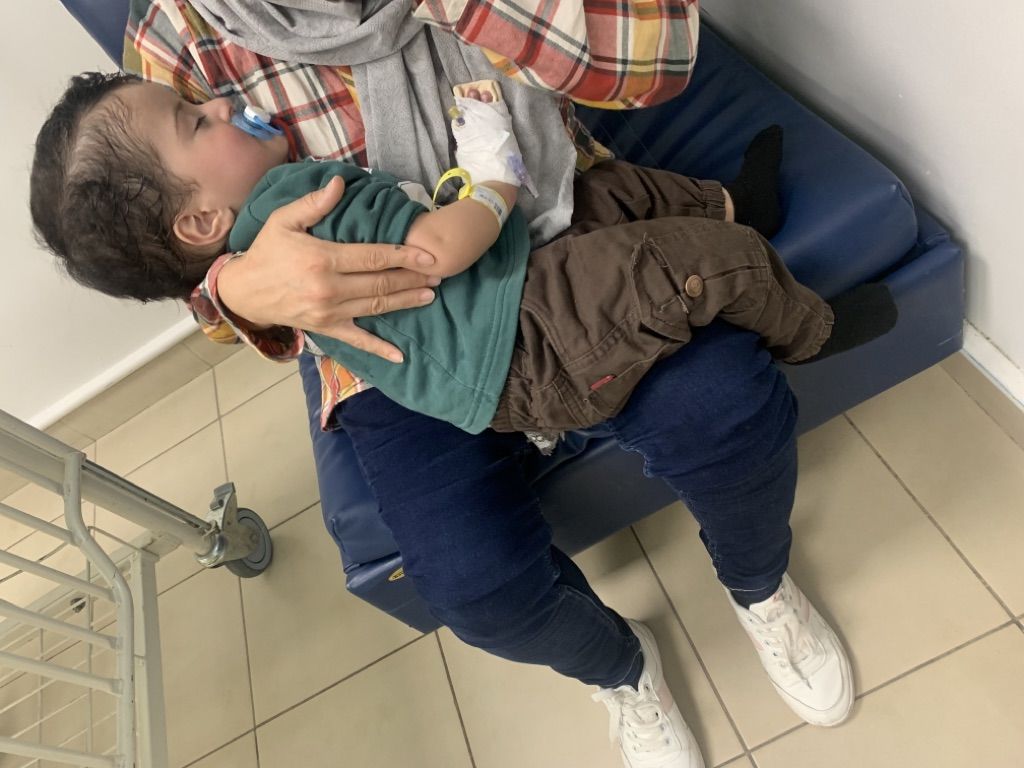 Finally, I took Miran, very exhausted in his mother’s arms, to the ICU where he was admitted. Miran needed a a blood test which was very painful for him because it was very difficult for the doctor to find a vein. Also a corona test was made and an IV was placed. 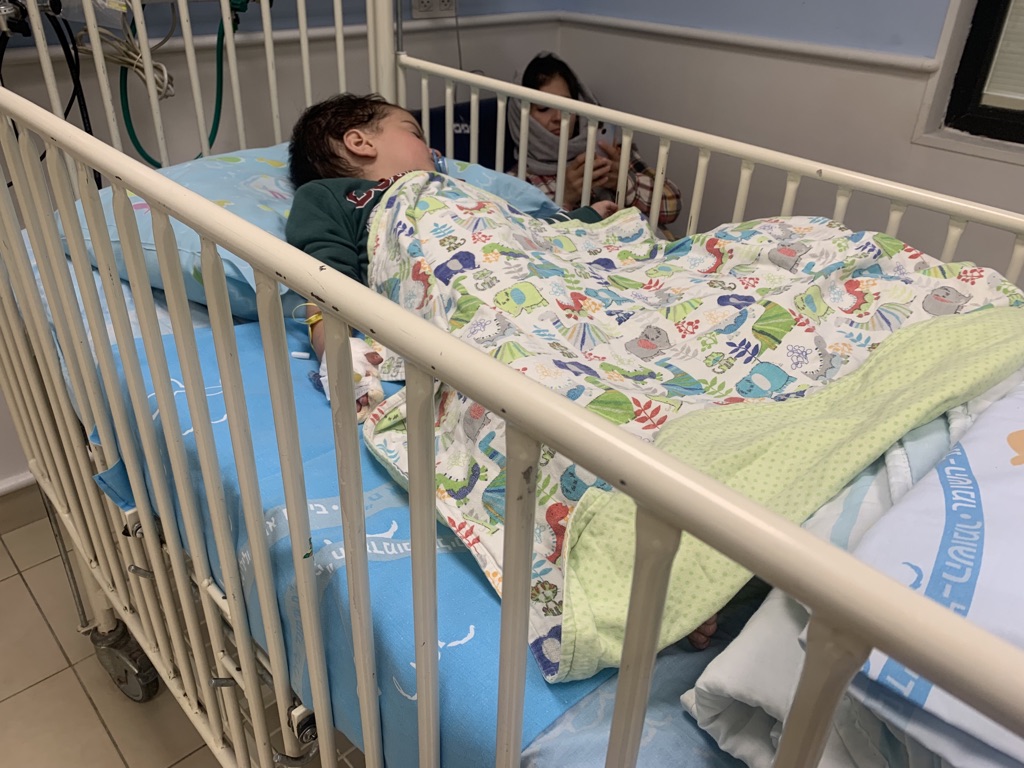 After all these procedures, Miran fell very tired in his mother’s arms –  asleep. Please pray for Miran’s upcoming treatments. He has a Cath tomorrow. Please also pray for strength for his mother.
Hide Comments Show Comments 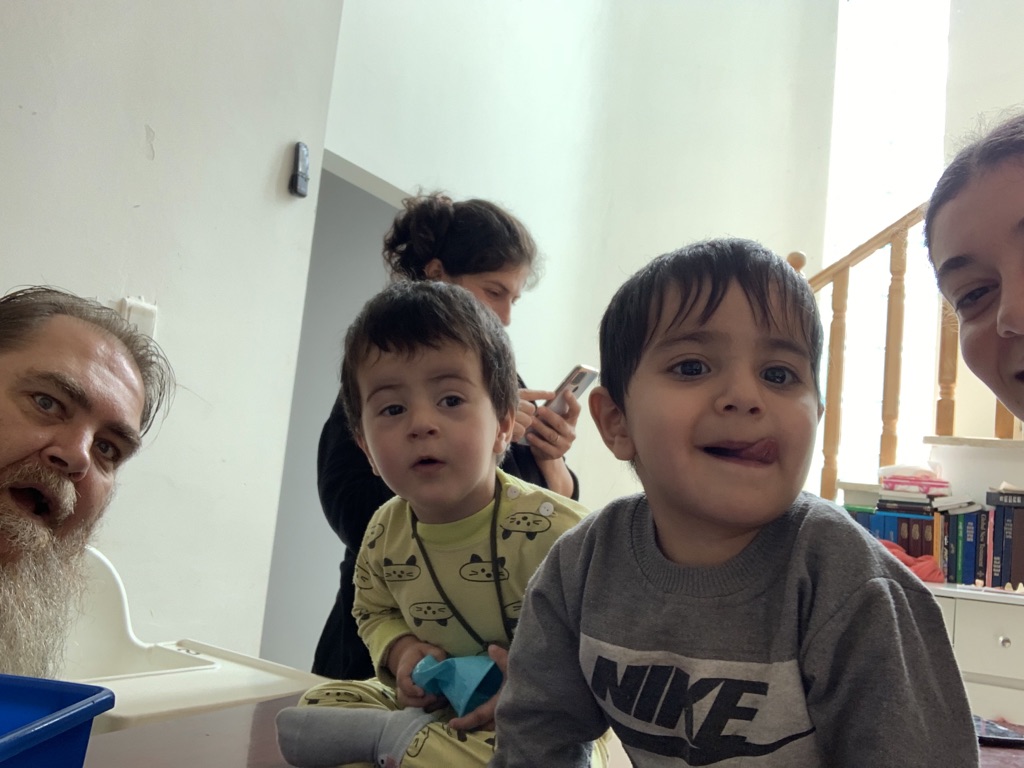 Today was a very dark and rainy day here in Ashdod, so we had to spend our ‘Family Care’ day indoors. I unpacked all sorts of pens and colors that I could find and then our creative morning was able to begin. 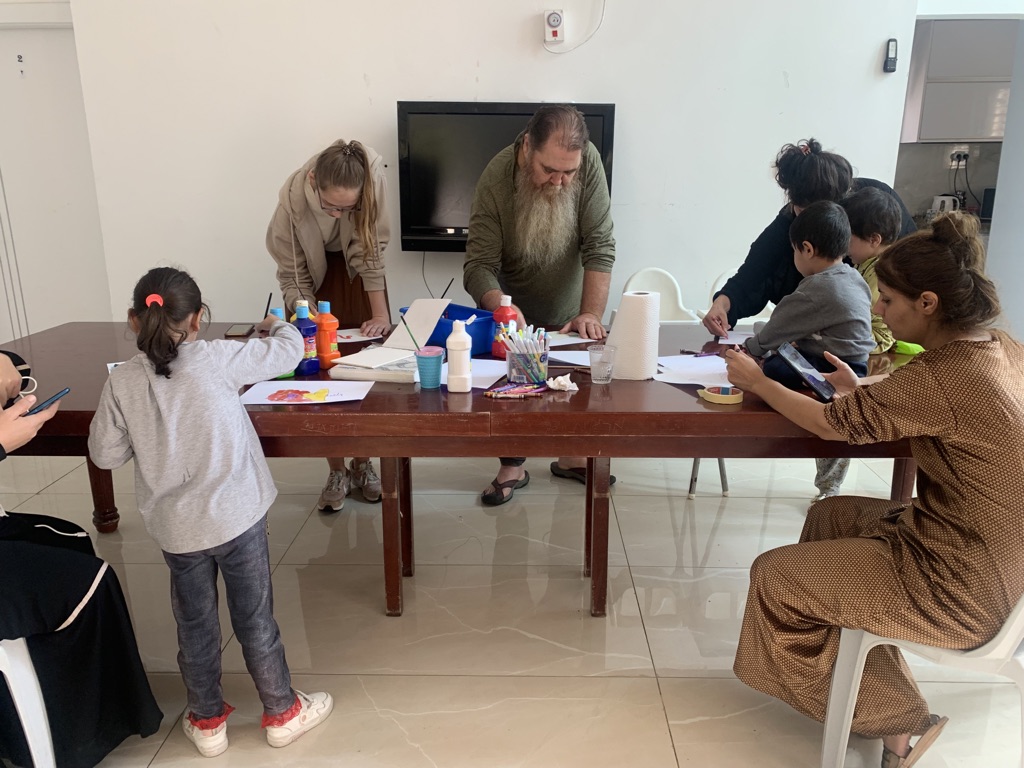 One picture after the other was painted. Miran was very enthusiastic. He sat on the top of the table. He smiled, squeaked and diligently painted his picture. Miran is waiting at  the moment for his Cath scheduled at Sheba Hospital for next week. 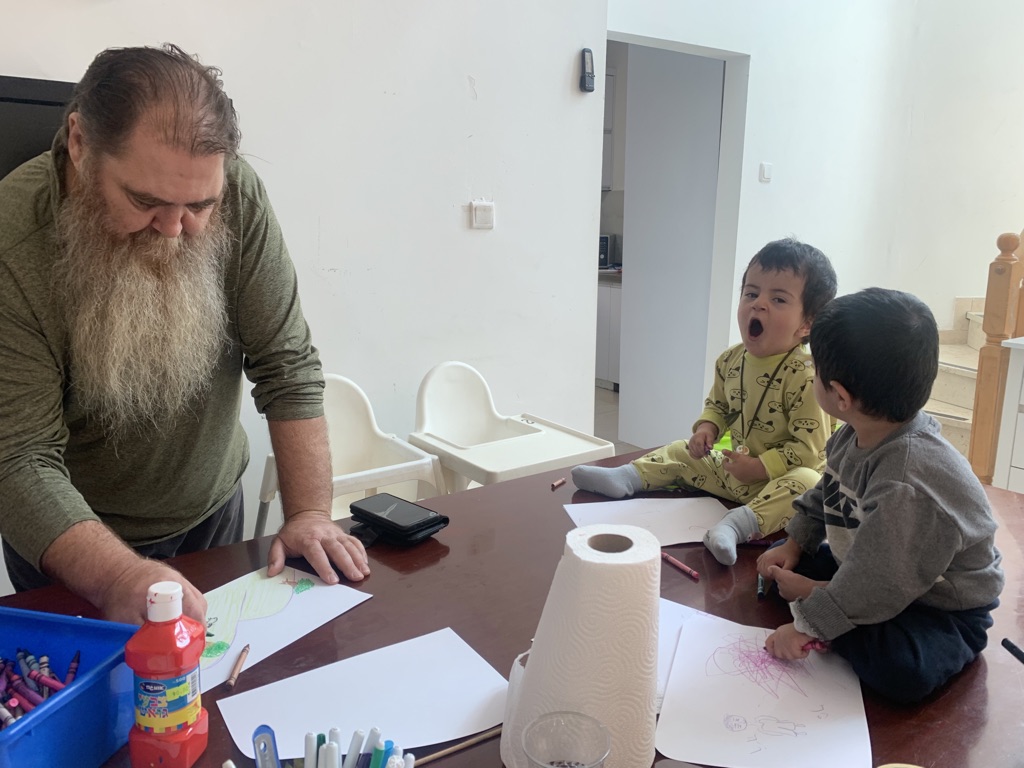 Please pray for him and his mother, that they have a wonderful time here in our family house in Ashdod, for strength and also for all the upcoming treatments.
Hide Comments Show Comments 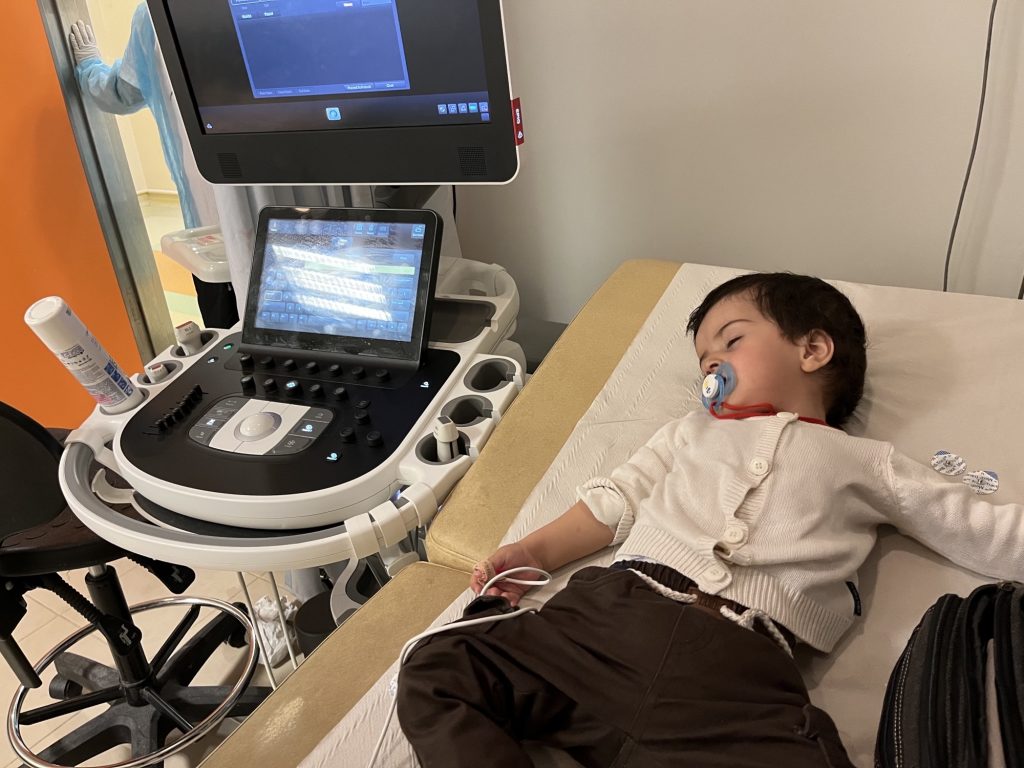 Today marked Mirans first day at Sheba hospital. He had his first echo, a blood test and an X-ray to evaluate his situation. Even though it was a new environment he was very playful and enjoyed the time between the test. For the echo he was a little bit anxious and was moving a lot what made it difficult for his doctors to do the imagery. They had to retry a few times what was really exhausting for little Miran so in the end he fell asleep what made the job much easier for the echo tech. The doctors will meet in a few days to talk about the approach for him but they are considering a cath before his surgery. 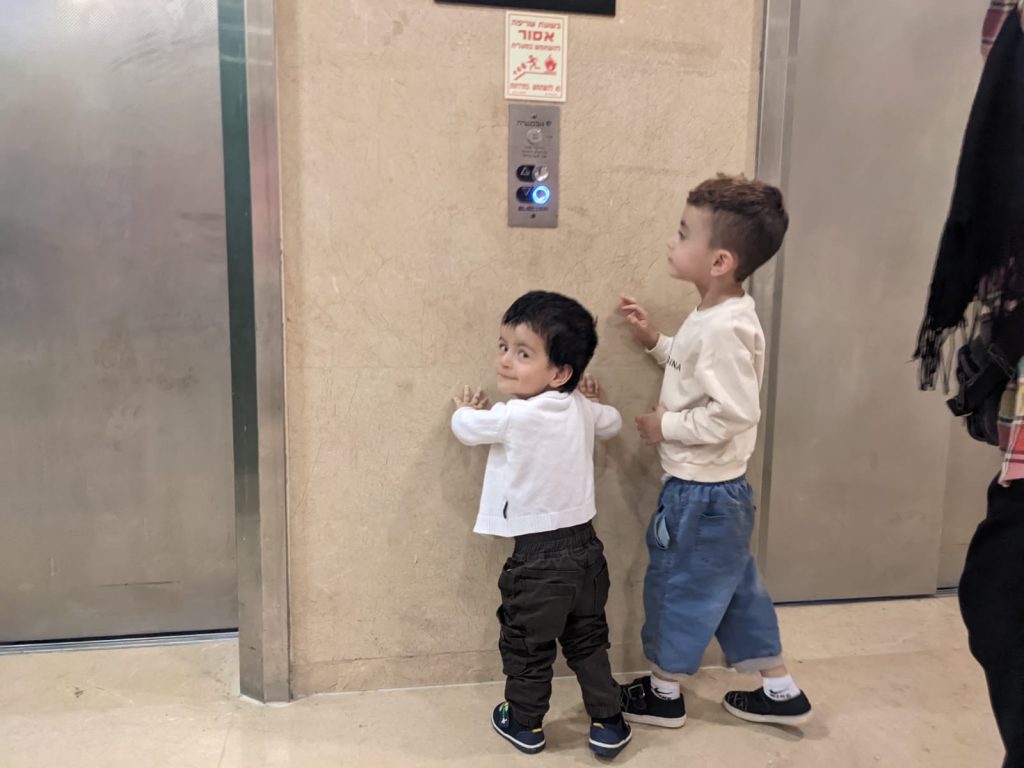 “Thank you Lord for precious Miran and his mother. Bless him in the following weeks with strength and endurance so that he will learn to not be afraid of the test at the Hospital.” 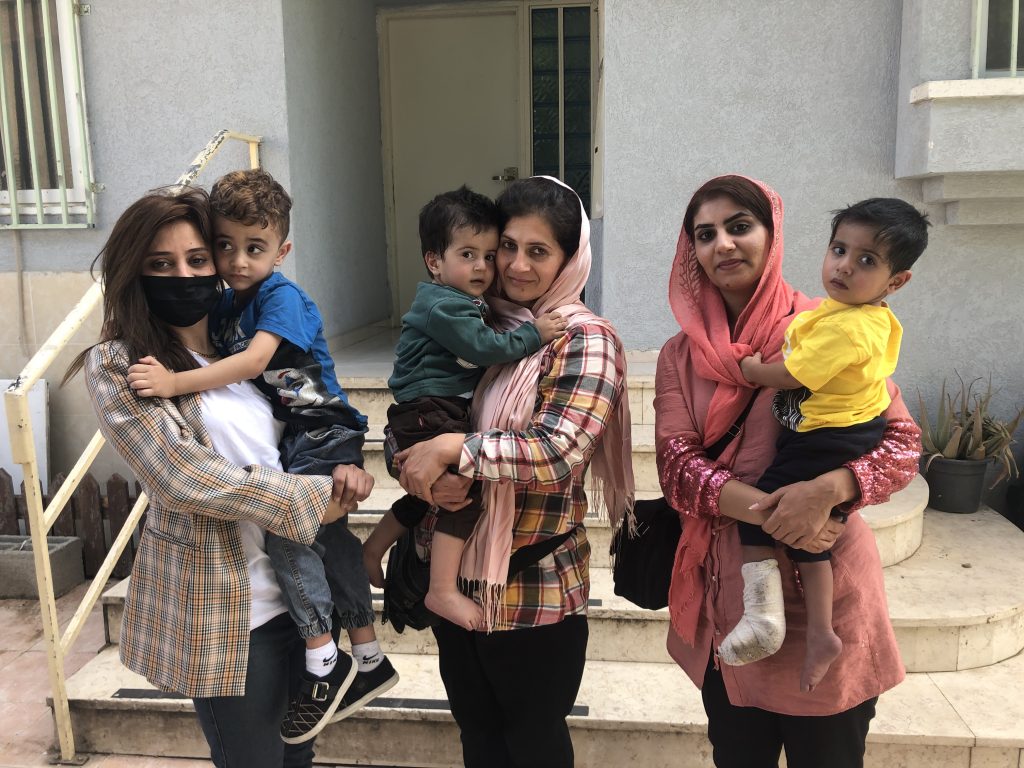 After a long trip, Miran and his mother arrived today safely with two other kids and their moms from Kurdistan. When I picked them up at Ben Gurion Airport all of them were really tired and we were all glad when we arrived in Ashdod. 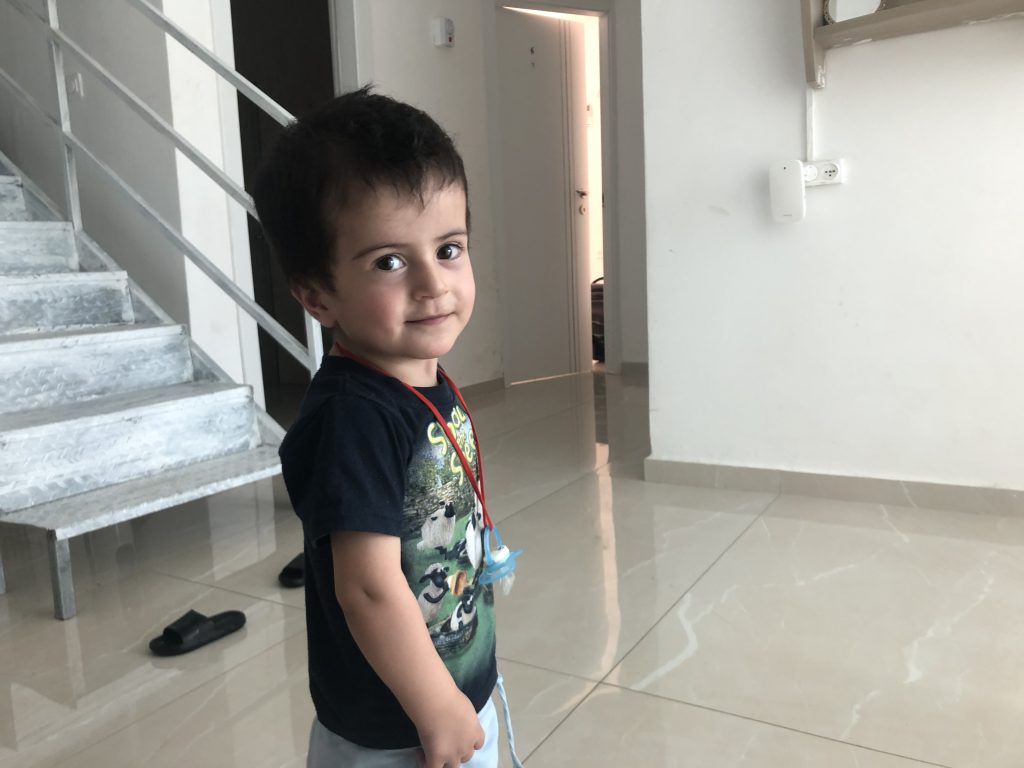 At first Miran didn’t look so happy about seeing so many unfamiliar people, but not too long afterwards, he was walking around the house like he was exploring something unknown and even gave me a smile. We are glad to have them with us and hope that his treatment goes well.

Please pray for him and his family for the time they are staying with us for treatment and even afterwards when they go home, that he can grow up just like any other child. 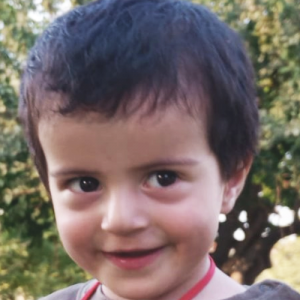 As of right now, Miran still needs $0 toward surgery and related expenses.