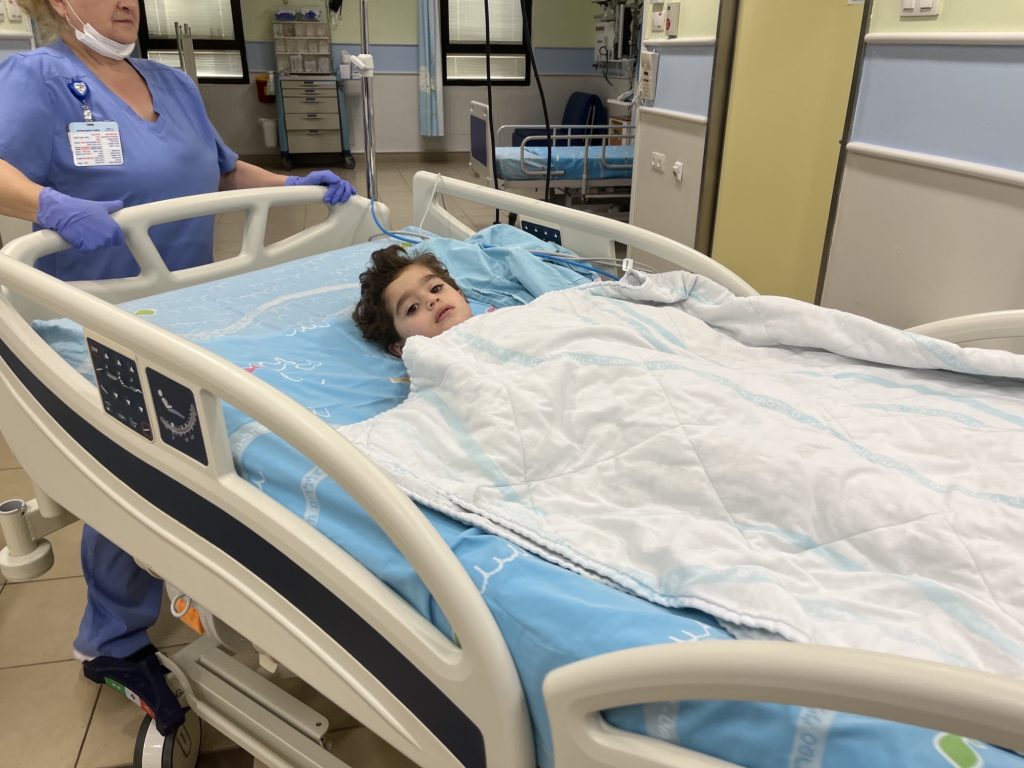 One of many surprises I had today was to see Daveen in the Secondary Pediatric ICU of Sheba Hospital. When I walked in to visit her, they were in the process of moving her out of the Primary ICU which is usually a very good sign. Moving children to the Secondary ICU means that they don’t need 24/7 surveillance anymore and are in a stable condition. After her surgery just three days ago, it’s so good to see Daveen doing so well. Her doctors said she is recovering very well and she will stay in the Secondary ICU a little bit until she can be discharged to our house in Ashdod. Daveen’s mother was so happy and the worried expression she had for the last days turned into pure joy and you could see her smiling the whole time.

Please pray for Daveen’s further recovery, that she continues to progress well, and can come back home soon. Also pray for strength for her mother as she is very worried about Daveen and her being in the hospital. 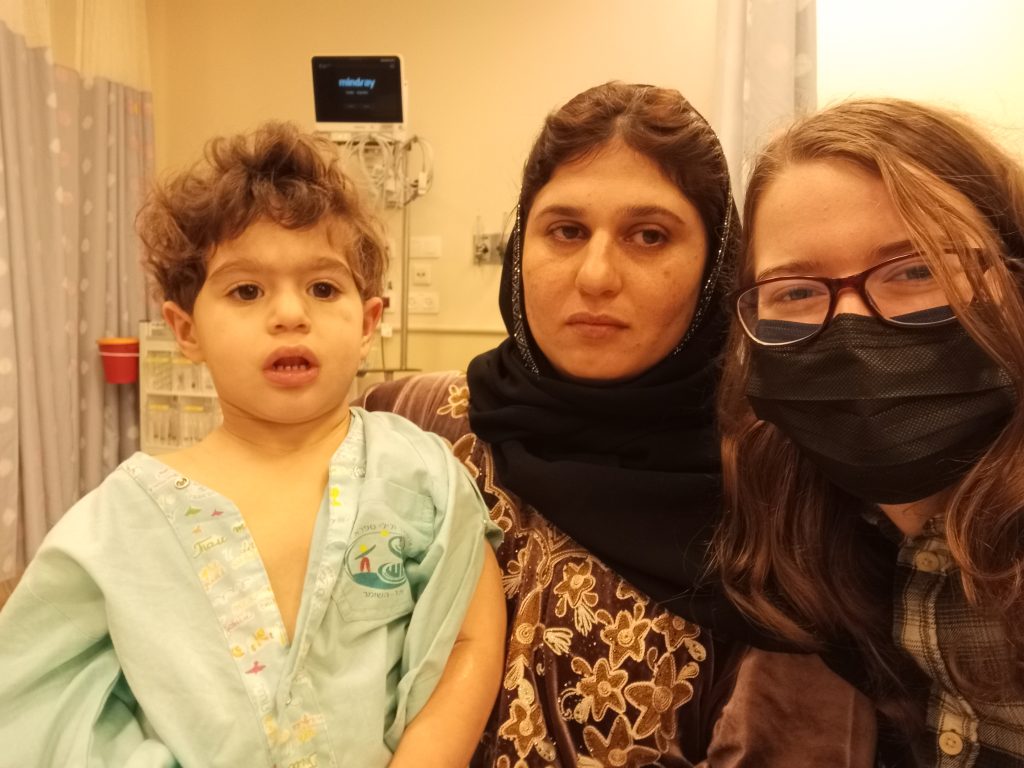 This morning coworker Jakob and I had just arrived to Sheba Hospital when I got a call from Daveen’s mother,

“Daveen is going into surgery now, where are you?”

I promised her we’d be there in two minutes and after running upstairs, I met her on the way to the surgery preparation room with a nurse. She was fighting against tears and was noticeably relieved once she saw me. After we were asked some more questions in the preparation room, and after Daveen’s mom signed one last consent form, they gave Daveen her anesthesia and she fell asleep in the arms of her mother. 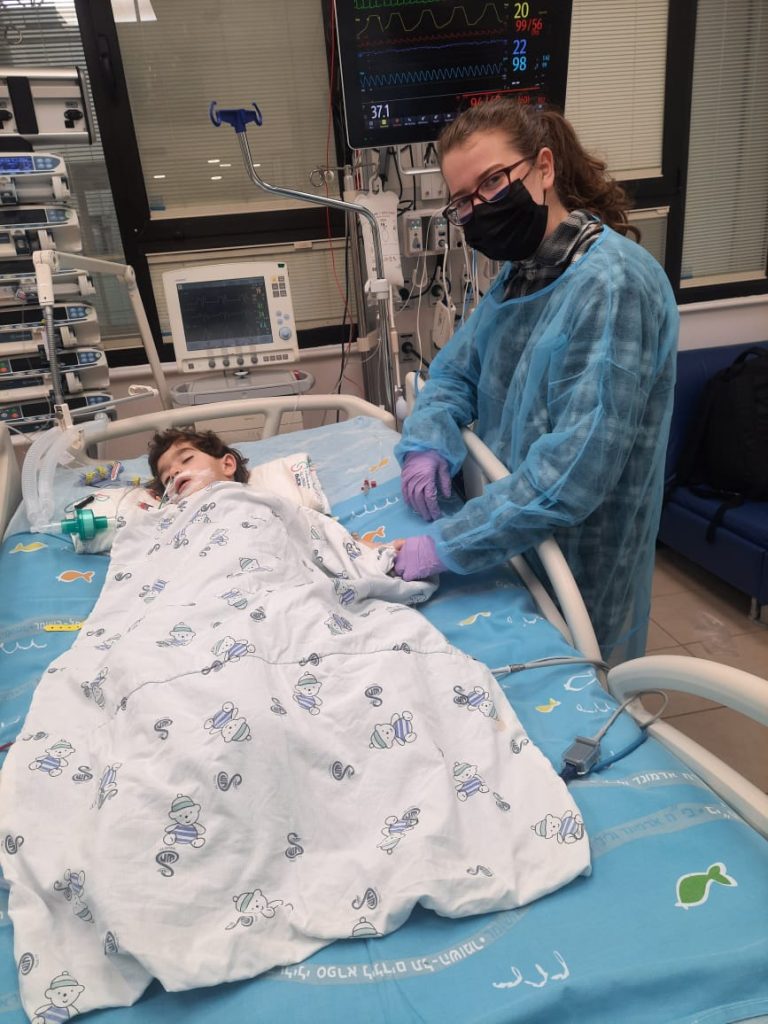 Once Daveen was sleeping, her mother burst into tears so she wasn’t able to carry her daughter to the OR anymore. I walked her outside instead where we sat down together and the long waiting hours started. 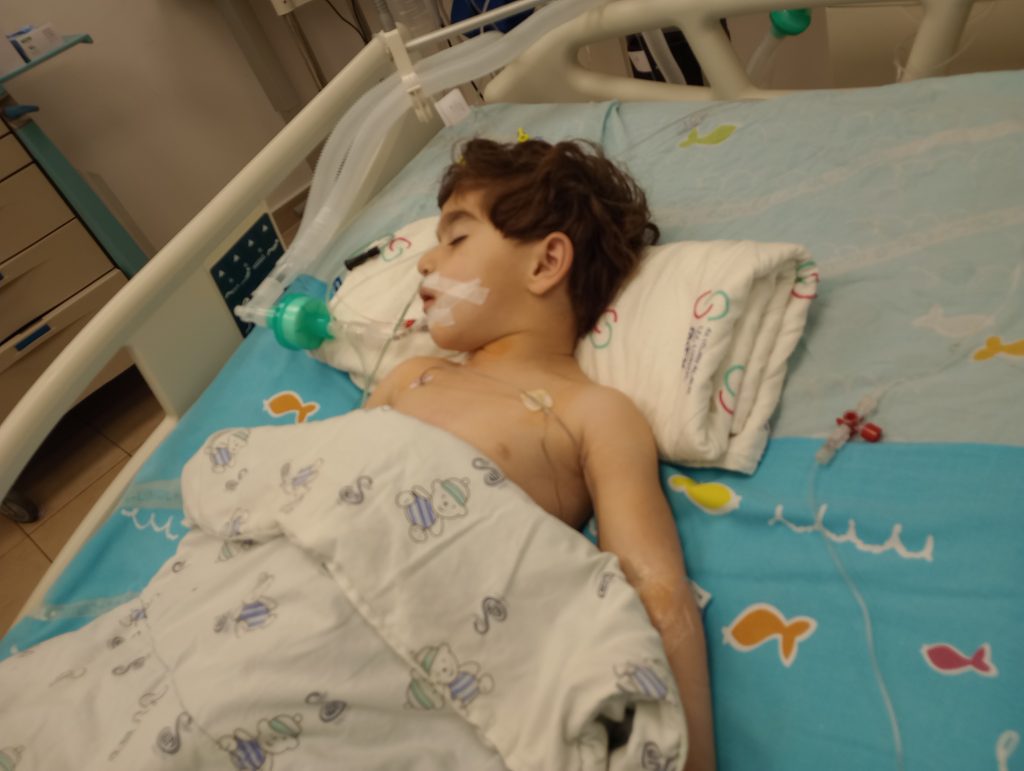 A friend of  Daveen’s mother who lives in Israel, came to the hospital to support her. In fact, so many people tried to encourage Daveen’s mother as she was so worried. Among there were some Jewish parents who waited for the cath of their son, other Gaza mothers, doctors and so many of our moms in Ashdod and some of her friends  back home who called her on her phone.

“Tell her that we pray for her daughter, ” and “God is great,” I heard so often and translated as Daveen’s mom only speaks Kurdish.

After five hours, the surgeon finally came out to tell us that the surgery went well and Daveen will be back in her room in twenty minutes! Her mom broke into tears one more time – this time relieved! 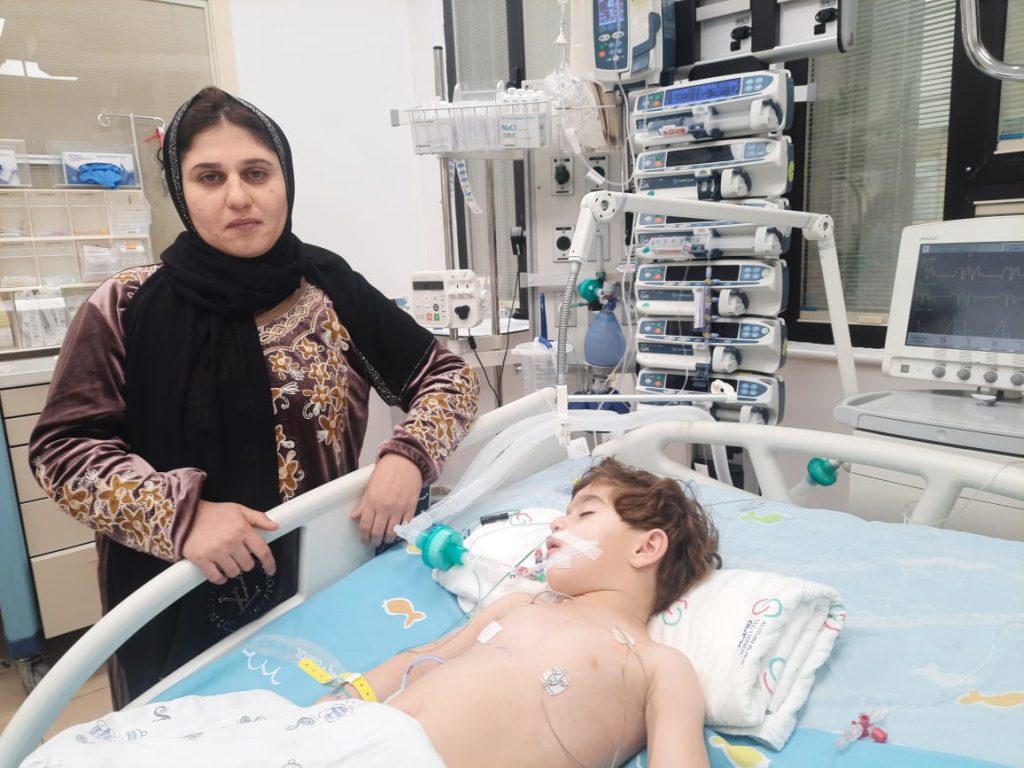 We went for a walk through the hospital now that we knew Daveen was okay and one hour later we were allowed to see Daveen in her room. The doctors were able to fix her ASD only through a small cut at the right side of her chest and didn’t have to cut her whole chest open which will leave only a small scar! Daveen was stable, doing well and when I said goodbye to her mom a little bit later, she told me for the first time of the day that she is doing well. 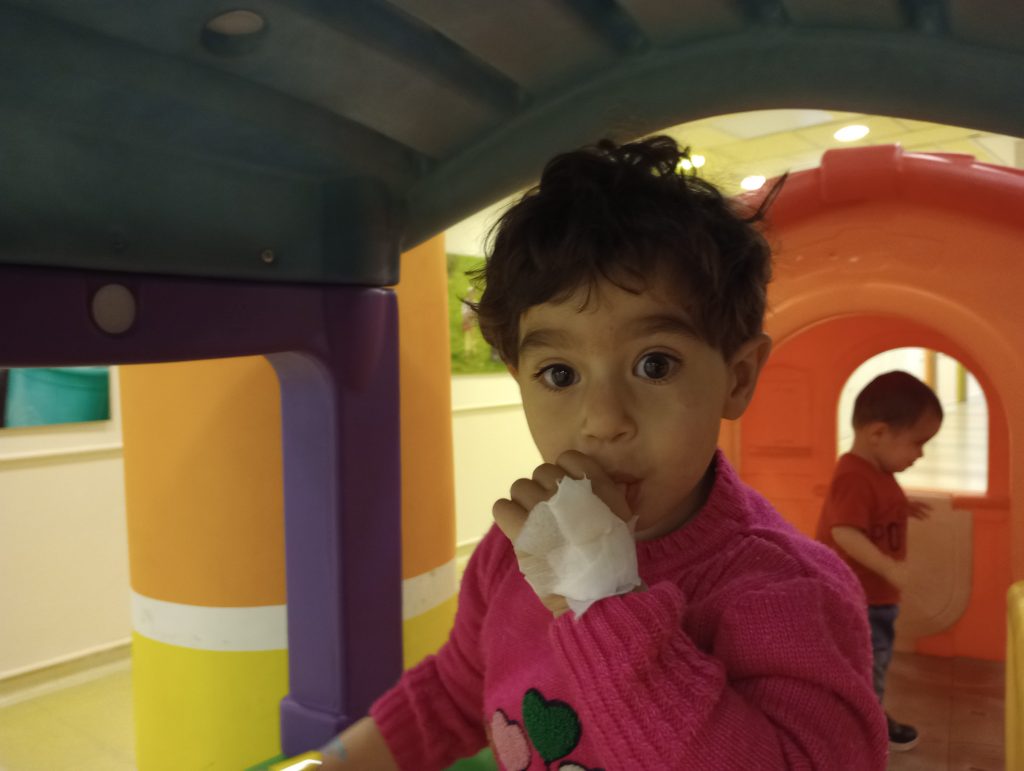 Early this morning we had to bring our friend Daveen and her mother for a CT scan to Sheba Hospital. This was the last test that Daveen needed done before her surgery so we had the great news that she will get admitted directly afterwards for the surgery tomorrow! 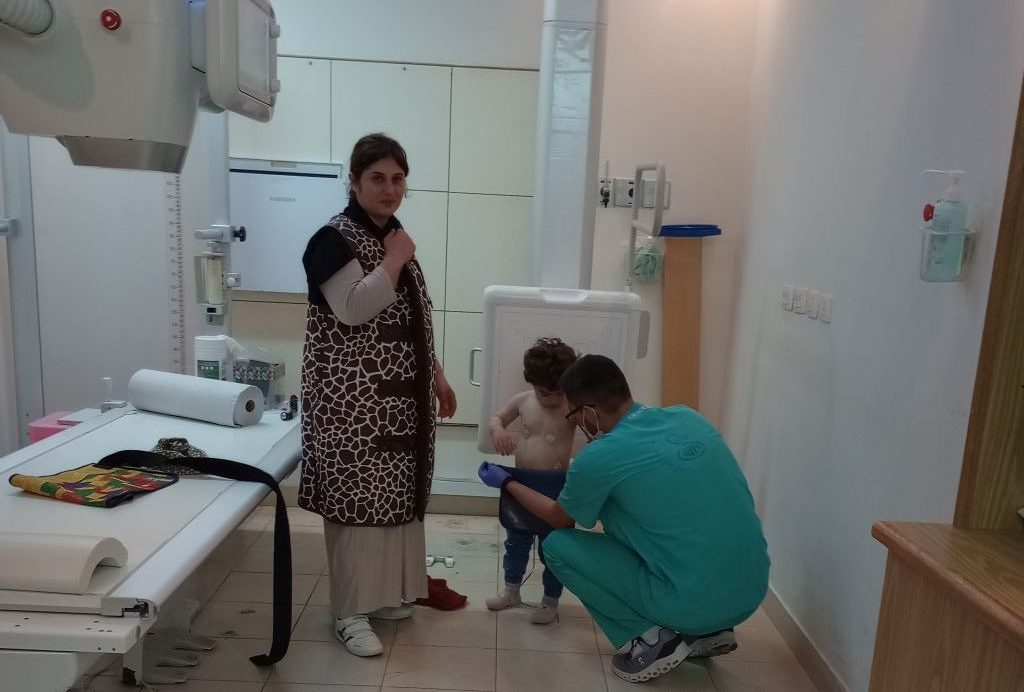 After a long waiting time, Daveen could finally have her CT. After she recovered from the anesthesia, we were able to start Daveen’s admission process in the ICU. It all went pretty fast as she already had an IV and they could take the blood for the blood tests from there. We went to an x-ray together which she didn’t like very much, but stayed very brave throughout. 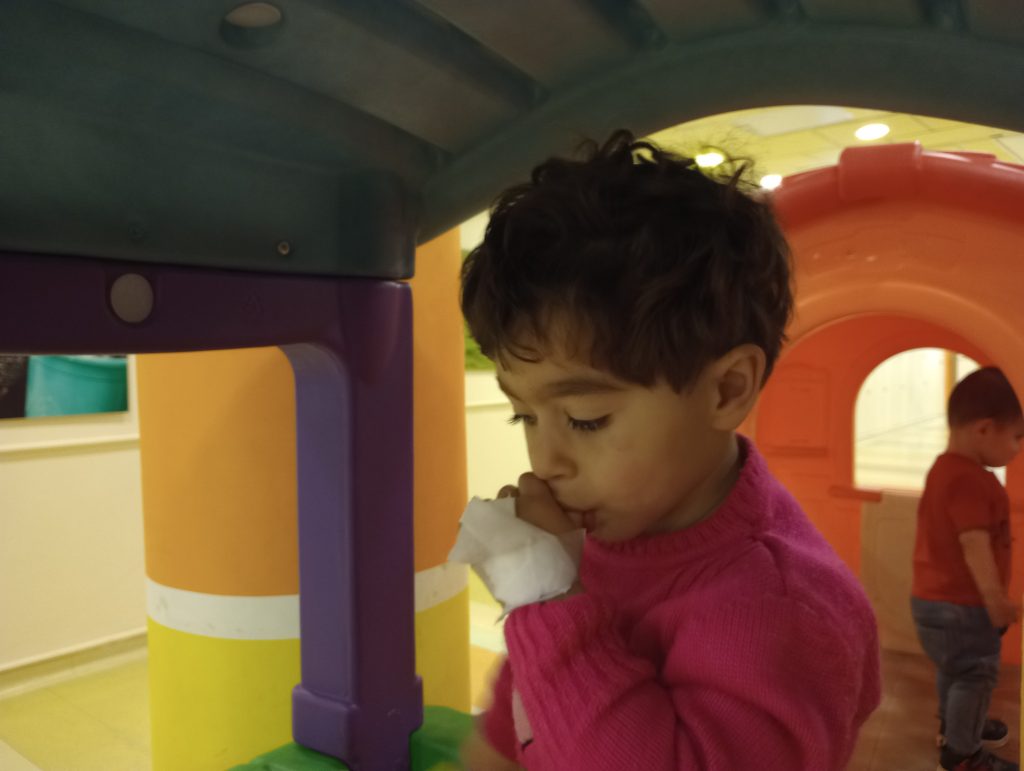 Daveen knows already a lot of nurses in the ICU as she has been admitted there before and so she happily waved at all of them. Please pray for a successful surgery tomorrow morning for Daveen and especially for her mom who is very nervous about it! 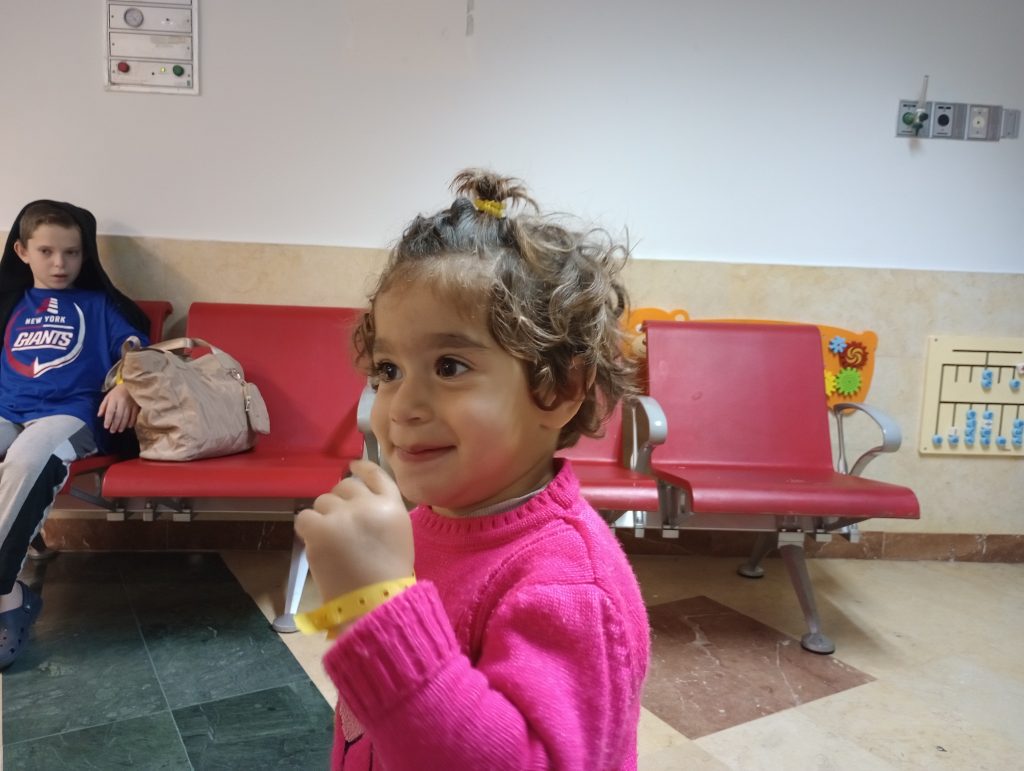 Today was a long day at Sheba Hospital for Daveen.

Early this morning she had an ultrasound for her liver. This was a necessary step before having heart surgery  which should come later. 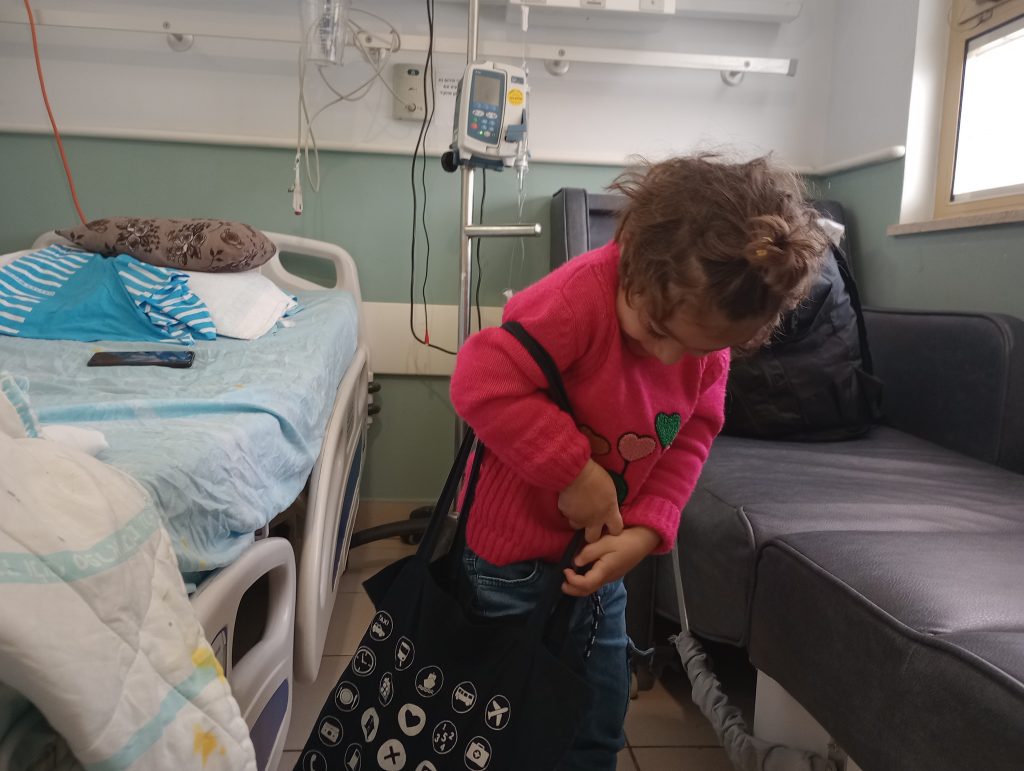 After some hours back in her room, the doctors had the good news for us that Daveen can get discharged today. Daveen was very happy about it and even though she probably didn’t completely understand what was going on, she took my bag and had fun carrying it around. 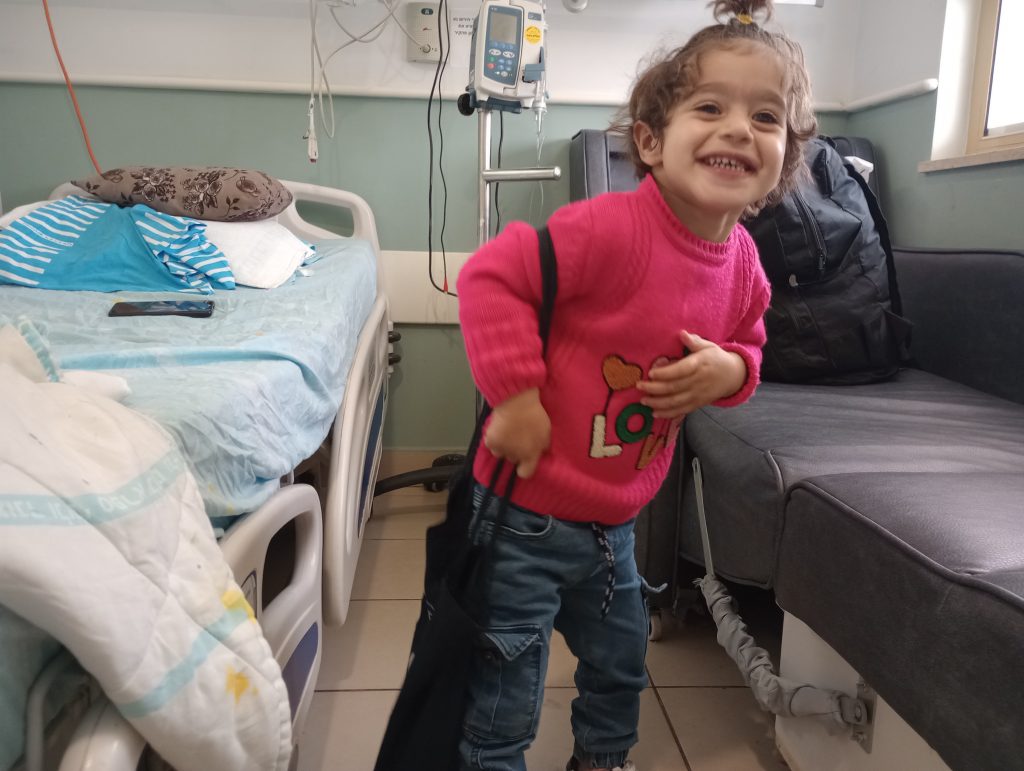 In the afternoon, Daveen was given another blood test to do some genetic screening. When we finally had her discharge report in hand, we were able to leave the hospital. Daveen and her mother were very happy about it and we are glad to have them back in our community house for this necessary season.

Daveen also still needs a CT scan before she can have her surgery.  We pray the CT and surgery will happen soon. 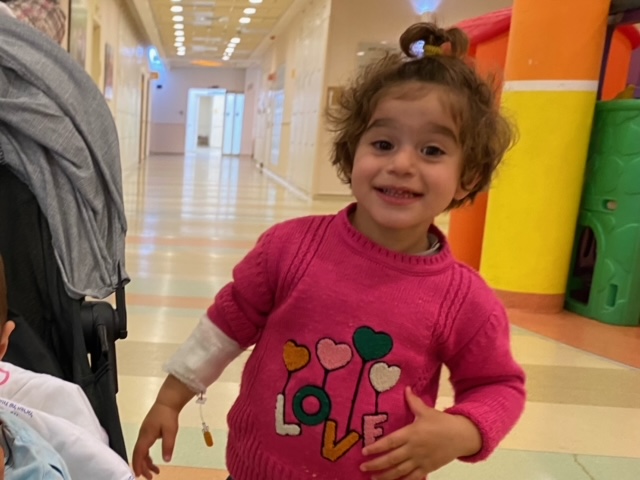 During making visits at Sheba Medical Center today, I asked the doctors about Daveen. They explained to me that her surgery could take place soon. The cardiologists are currently discussing her situation and would soon agree on a date. Before that, however, the doctors wanted to carry out some tests, such as a CT scan and an ultrasound.

Daveen doesn’t have to stay meanwhile in the hospital for that. She could even possibly be discharged tomorrow to our community home after she had previously been admitted because of pneumonia. Then she would only come to the hospital for the tests and spend the rest of the time with us in Ashdod. Ultimately, however, the cardiologists would also make the decision here about the exact date. 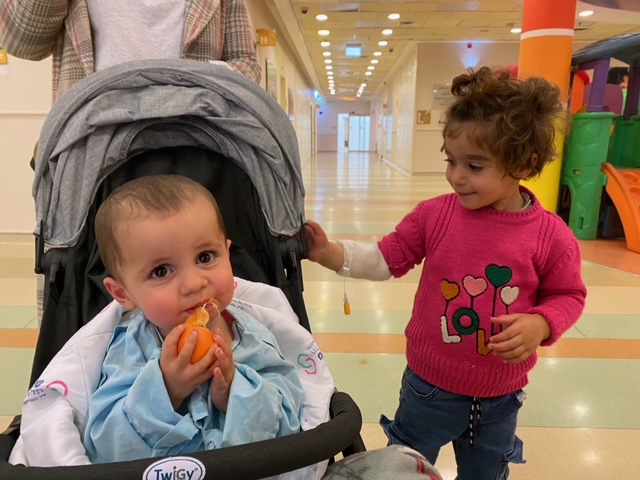 Today Daveen took care of a Kurdish boy who just had his surgery. How nice to see her so caring.  We’re praying for wisdom and guidance for the doctors in making decisions for Daveen, as well as peace for Daveen’s mother. 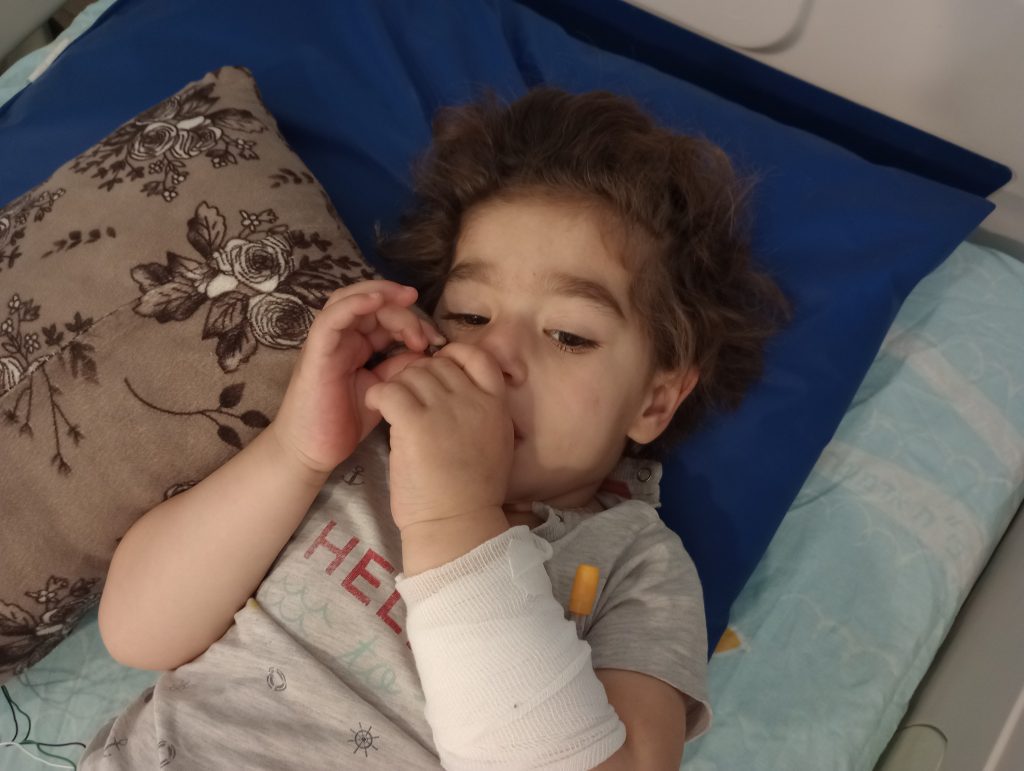 After her admission to Sheba Hospital’s Pediatric ICU last night, Daveen has already been moved to the Pediatric Ward today. Since she started receiving antibiotics, she is stable again. She has good oxygen saturations without oxygen support, and doesn’t have a fever anymore. She isn’t eating very well yet and her stomach is still a little bit bloated, but if this shows improvement tomorrow, they are considering discharging her to Ashdod again. 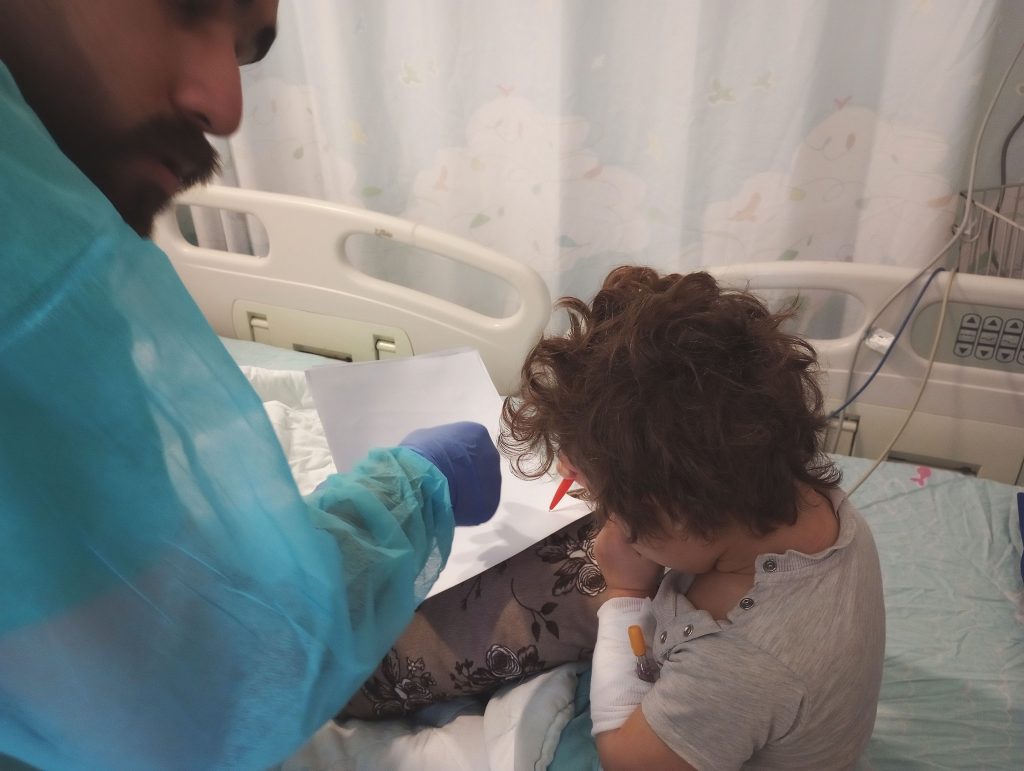 Daveen’s mom is having a hard time in the hospital as she only speaks Kurdish and cannot read. It’s very nice for her that another Kurdish mom whom she is friends with, is also in the hospital and can help with translating sometimes.

Please keep praying for our cute girl and for her mother! 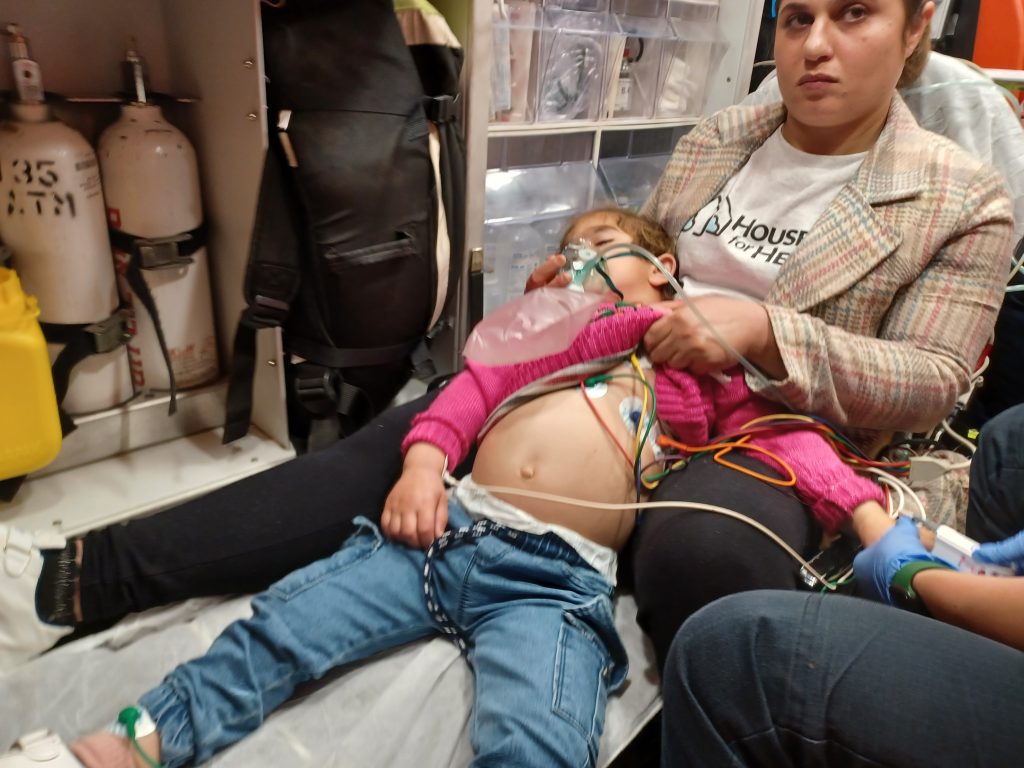 In our community home in Ashdod, Daveen’s mother asked me to come check on Daveen. She has been coughing a lot the last couple of days. I checked her saturation, heartrate and temperature. The saturation was lower than normal and Daveen seemed to have trouble breathing. I asked the opinion of my coworker Hison, who is a doctor. He decided to check the oxygen a little bit longer. And the longer we waited, the lower the oxygen got. Daveen’s fingertips became blue.
We decided to call an ambulance. Daveen was brought to the Pediatric ER of Sheba Hospital. After a couple of hours, she was admitted to the hospital with pneumonia. She developed a high fever in the ER as well. The doctors will take a close look at her these next days and Daveen will receive antibiotics to treat the pneumonia. 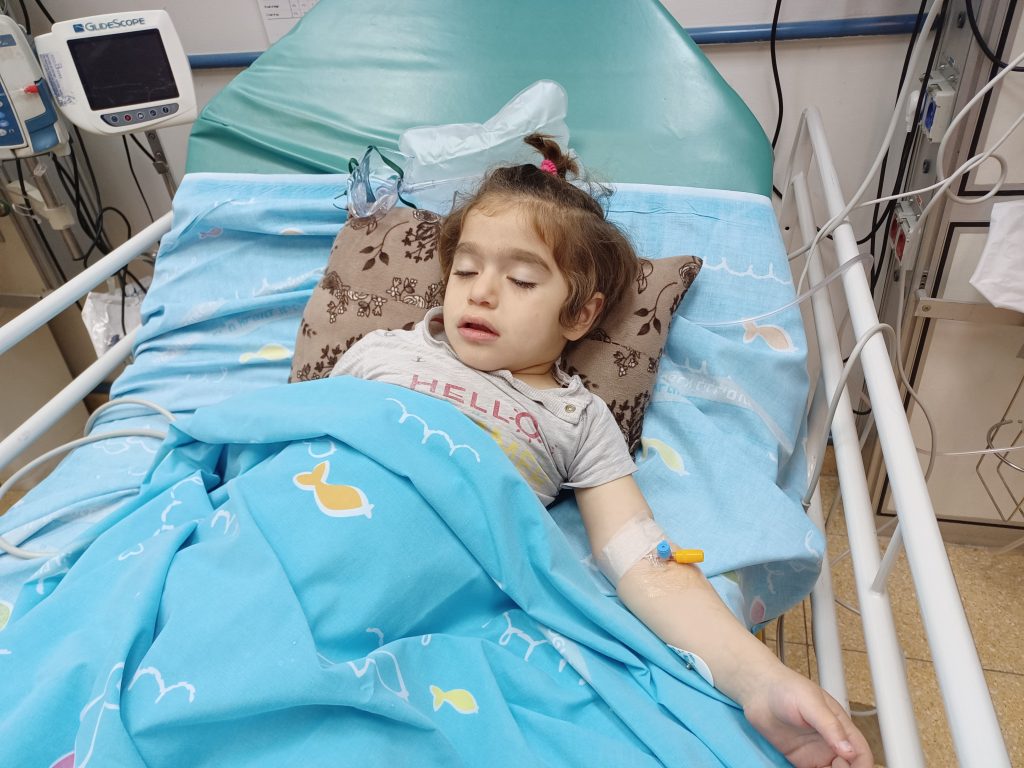 Daveen’s mother was really strong, but it was overwhelming for her to see her daughter first doing okay and in twenty minute’s time, doing not well at all. But I see God’s hand in these situations. I could’ve easily said that it’s all fine, or that we would check in on her later again because probably it’s just a cold. But God gave me the feeling there was more going on. Praise Him for taking care of Daveen.
Hide Comments Show Comments 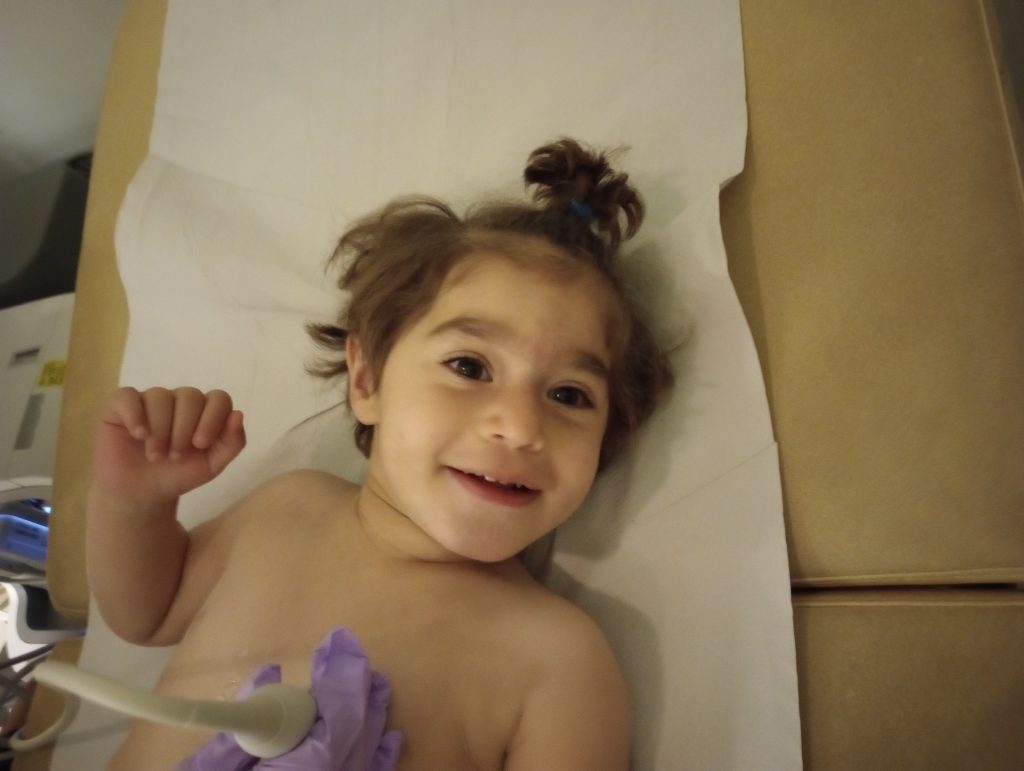 Today our cute Daveen had her first echo at Sheba. She was all excited no matter what happened. She loved the playgrounds in the hospital but also all the medical devices in the echo rooms. 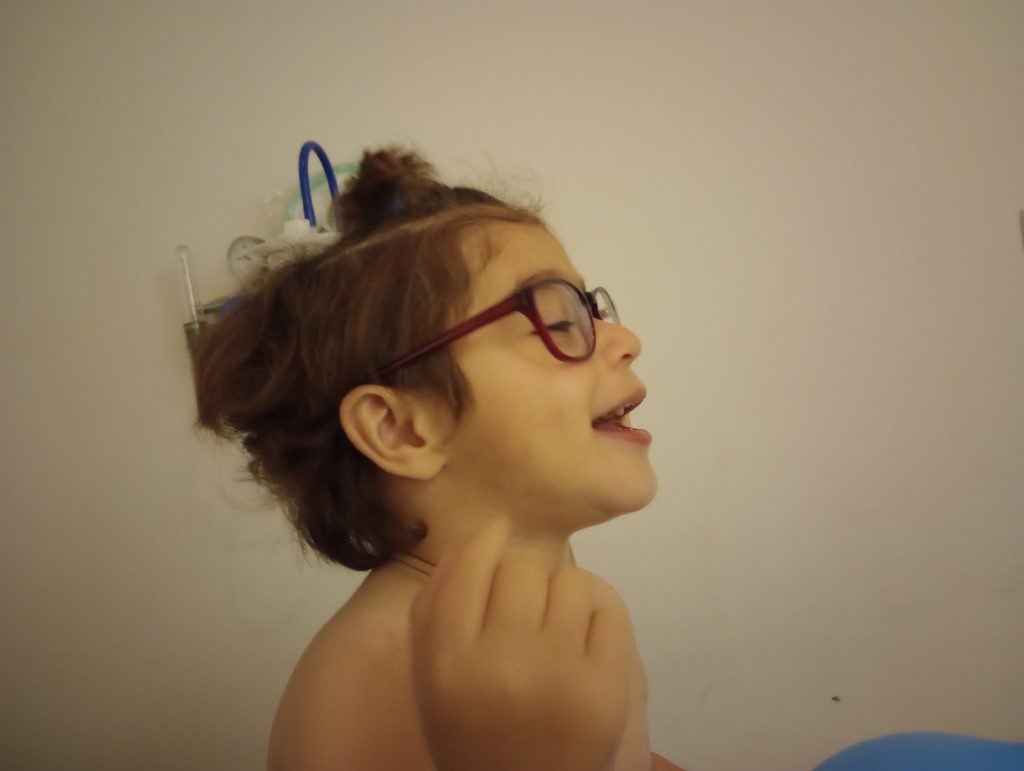 We played together with a glove balloon and she stole my glasses and my phone. She wasn’t even afraid of the doctors but seemed to make friends with everyone. 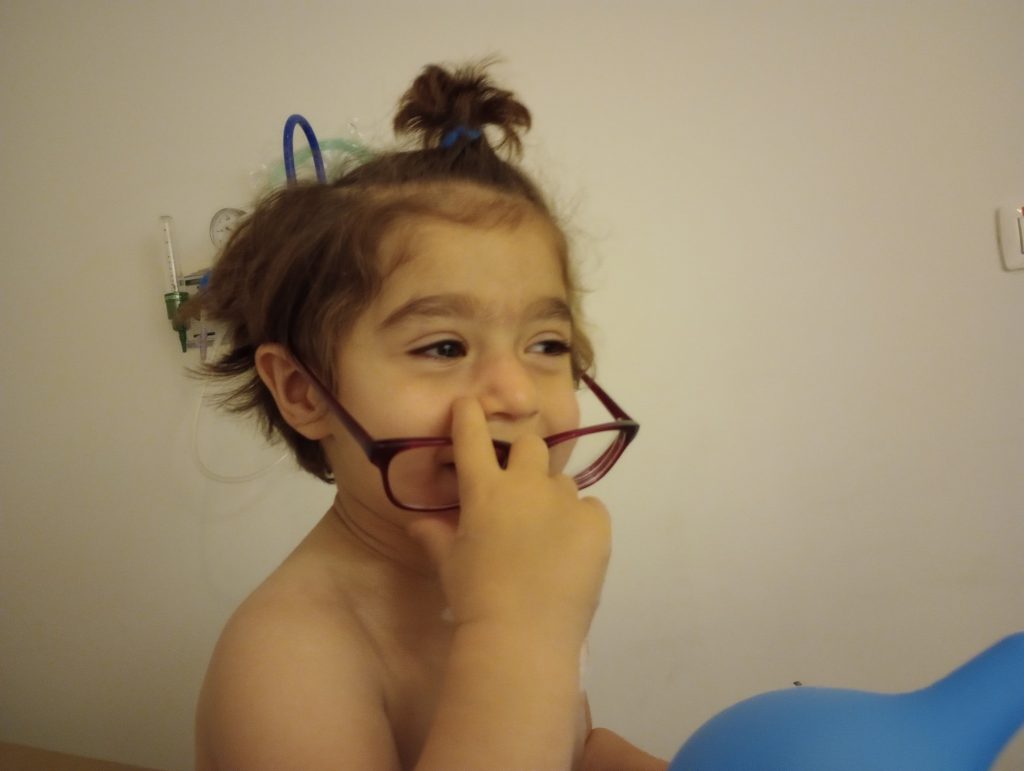 Her echo took a long time as first some echo technicians did it and then her cardiologist made more pictures.

Her doctor confirmed the diagnoses already made in Kurdistan and said she wants Daveen to get an ultrasound and a CT scan before they make a surgery plan for her. Please pray that she can have those tests soon and for wisdom for her doctors. 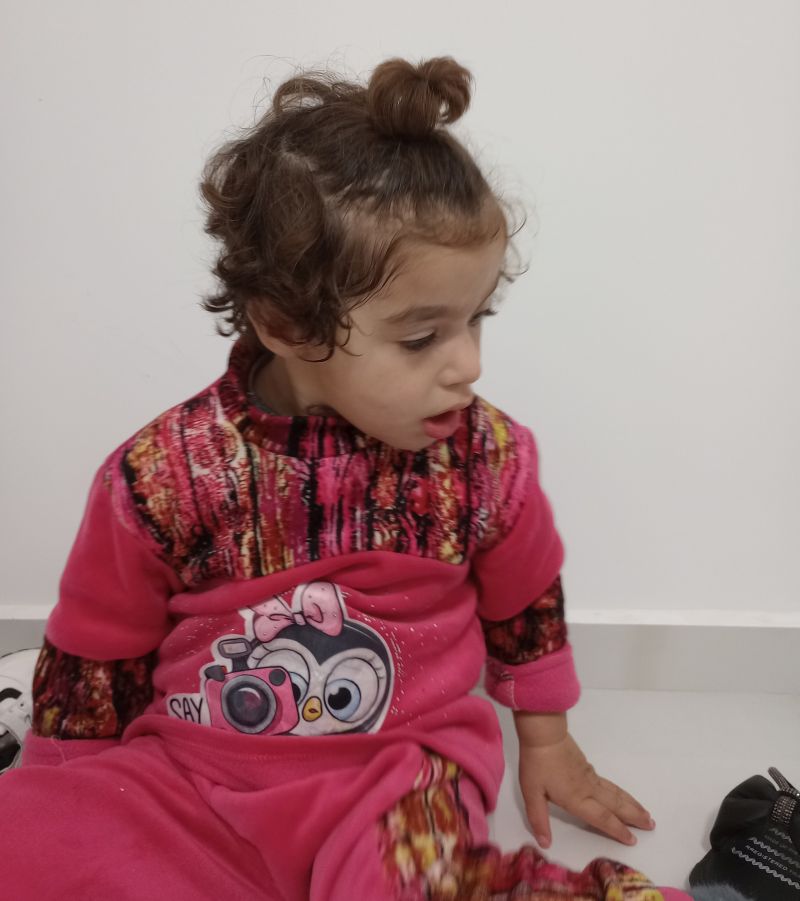 Early this morning I picked up Daveen from the airport, together with his mom. After arriving in Ashdod to our community house, they were very tired so they first went to sleep of course. 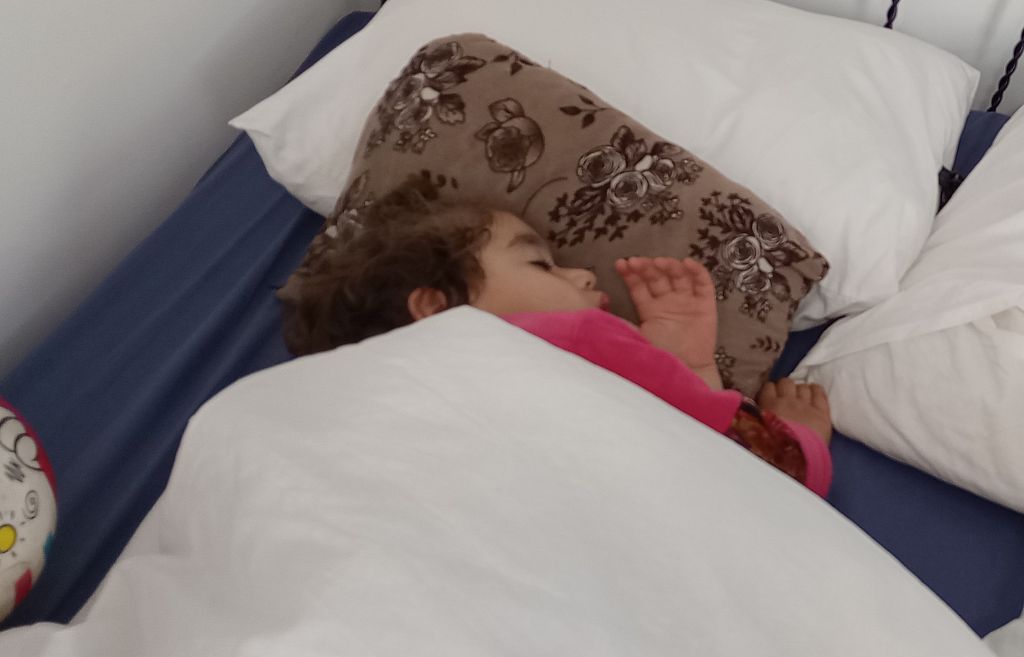 Daveen is funny and already making friends with two other Kurdish children who are in the same age at our house. Next Sunday Daveen will have her first echo at Sheba Hospital and her mother is a little bit worried of going to the hospital because she doesn’t speak Arabic. Please pray for her that she will feel comfortable here and that we can be a good support to her. And please pray for Daveen and all her coming treatments.
Hide Comments Show Comments 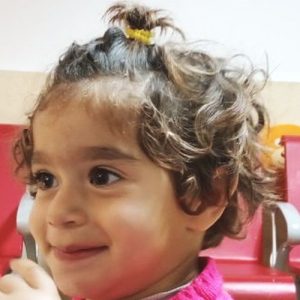 Daveen does not yet have a local leader to advocate for prayer for her surgery.

As of right now, Daveen still needs $0 toward surgery and related expenses.