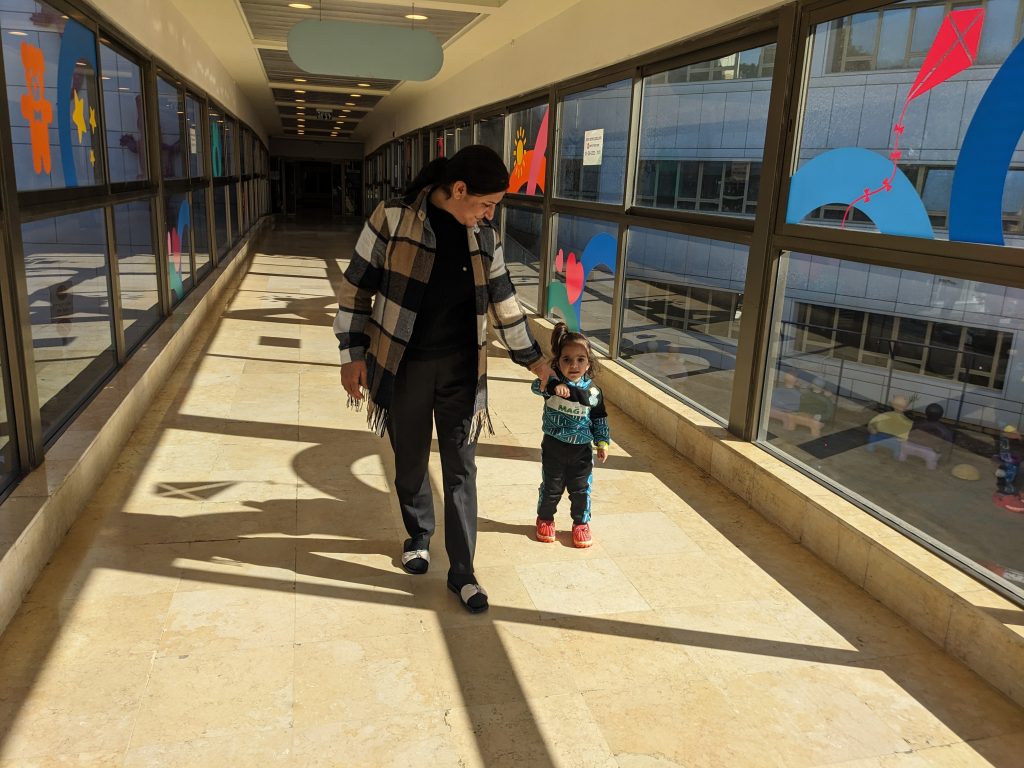 Beautiful Maryana was discharged from Sheba just in time for the weekend. She’s looking and feeling much better since her surgery and even wanted to walk most of the way from her room to the car in the parking garage. In fact, she’s doing so well that she doesn’t even need any support from medications!
Maryana will have an echo in a week to check up on the recovery of her heart after surgery. In the meantime, she and her mother are finally getting some well-deserved rest at our house in Ashdod.
Hide Comments Show Comments 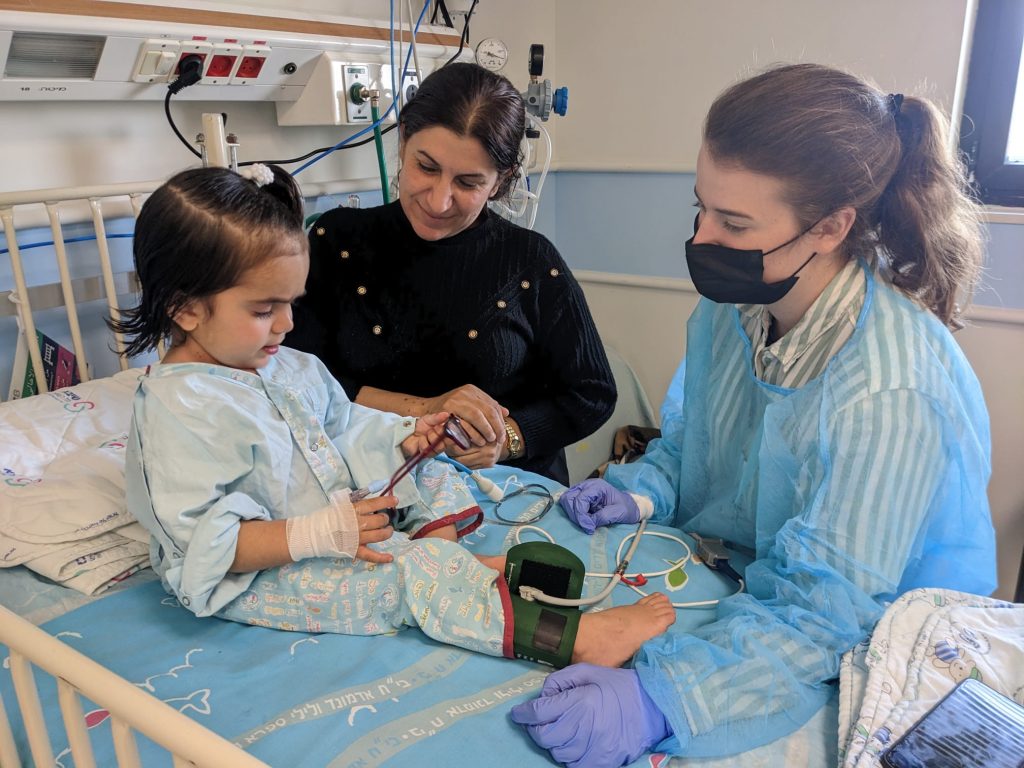 When we visited Maryana this morning we were surprised and happy to find her already moved to the secondary ICU only two days after her big surgery! 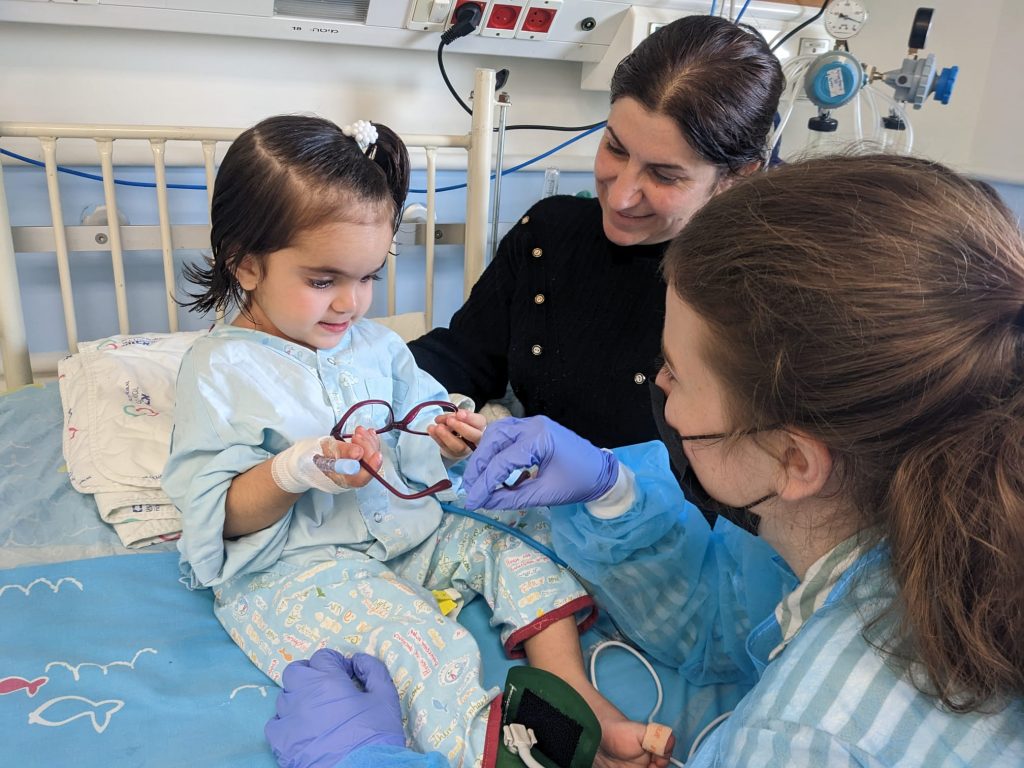 She wasn’t very happy at first as some nurses just finished a blood test but once they were gone we cheered her up with a glove balloon and she stole my glasses. 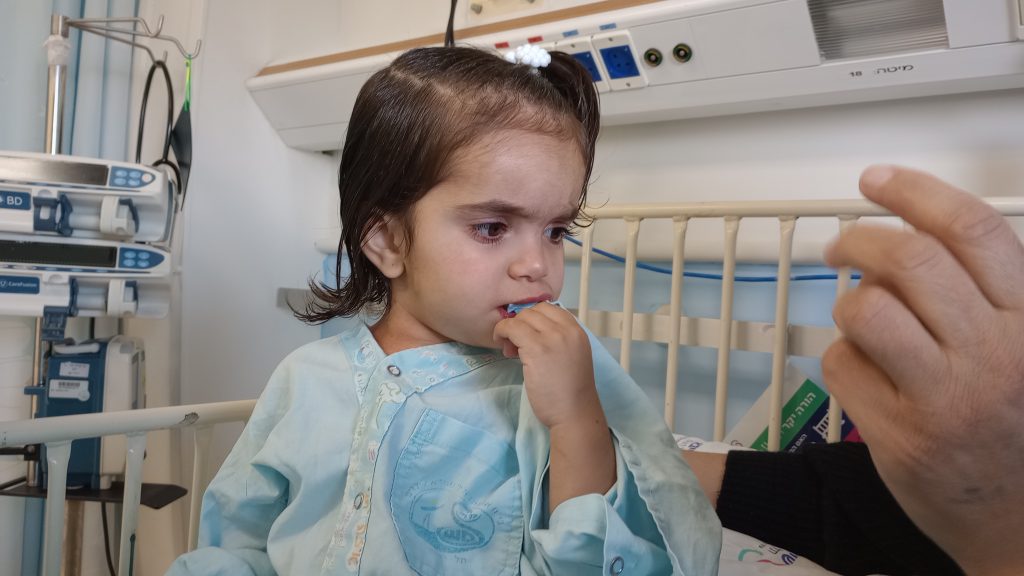 She was laughing a lot as Bria and I were hunting each other with the balloon and forgot that she was angry at her oxygen sensor a minute ago. We are so thankful for all the steps she is making and seeing her improving. 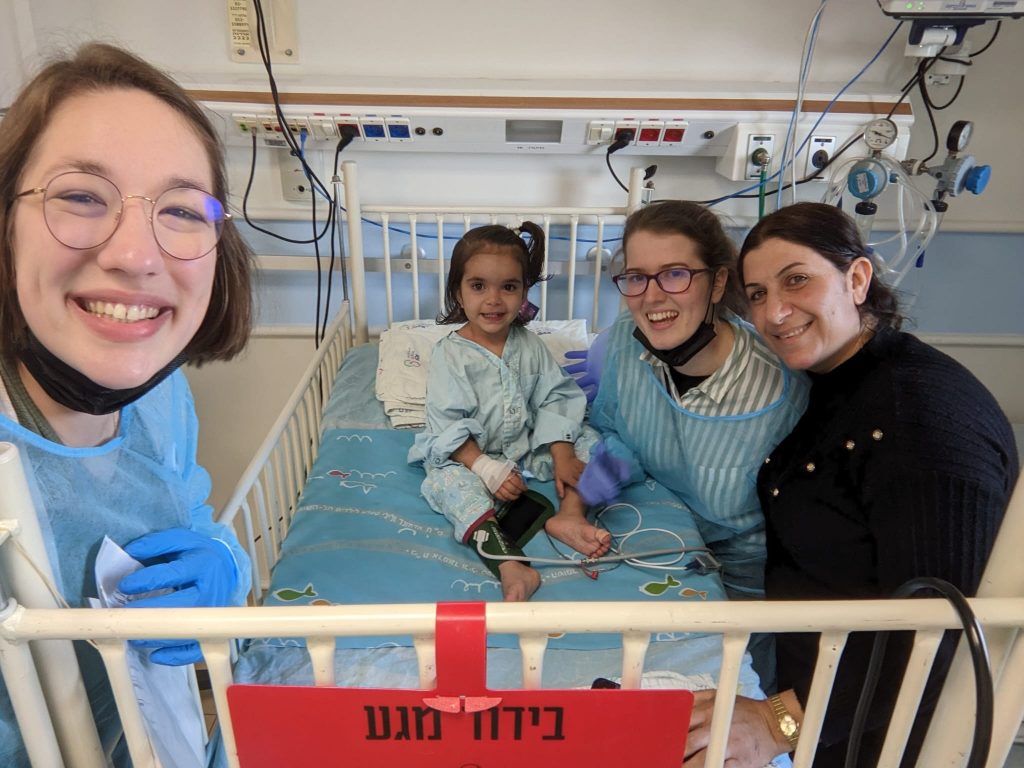 We wouldn’t be surprised if she will get discharged from the hospital soon and this time we will hopefully be able to be less nervous about having her in our house as her heart problem is fixed now and her oxygen saturation are so good! Thank you God for our little miracle Maryana! 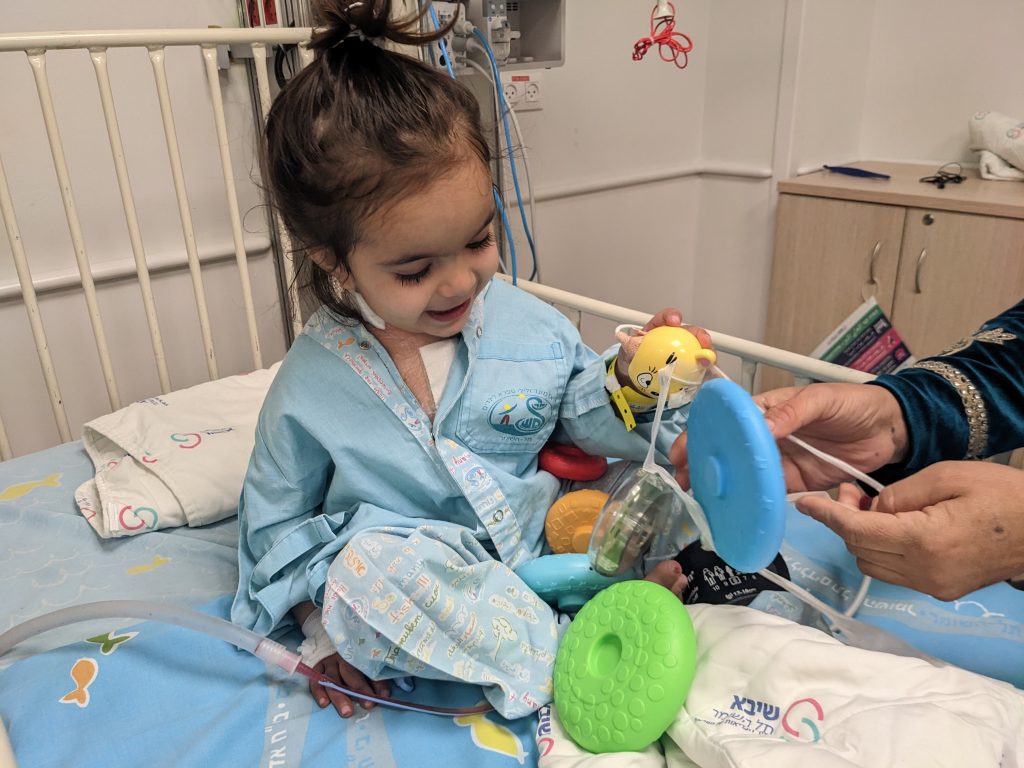 This afternoon, I saw Maryana for the first time since our exciting trip to the emergency room last week. What a difference just a few days makes! I found her sitting up in her bed in the ICU, watching videos on her mom’s phone. 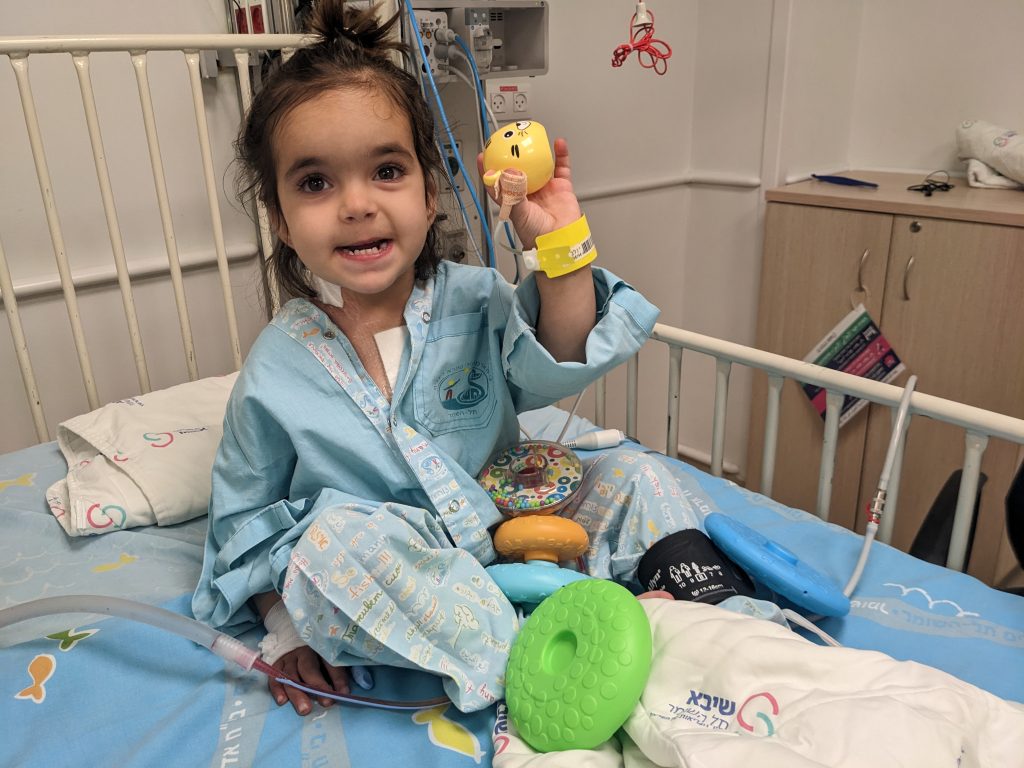 Her lips and fingers are no longer blue and she’s already full of energy just one day after surgery. Her mom brought out a toy for her and she loved taking apart all the pieces and dropping them one by one out of her bed. 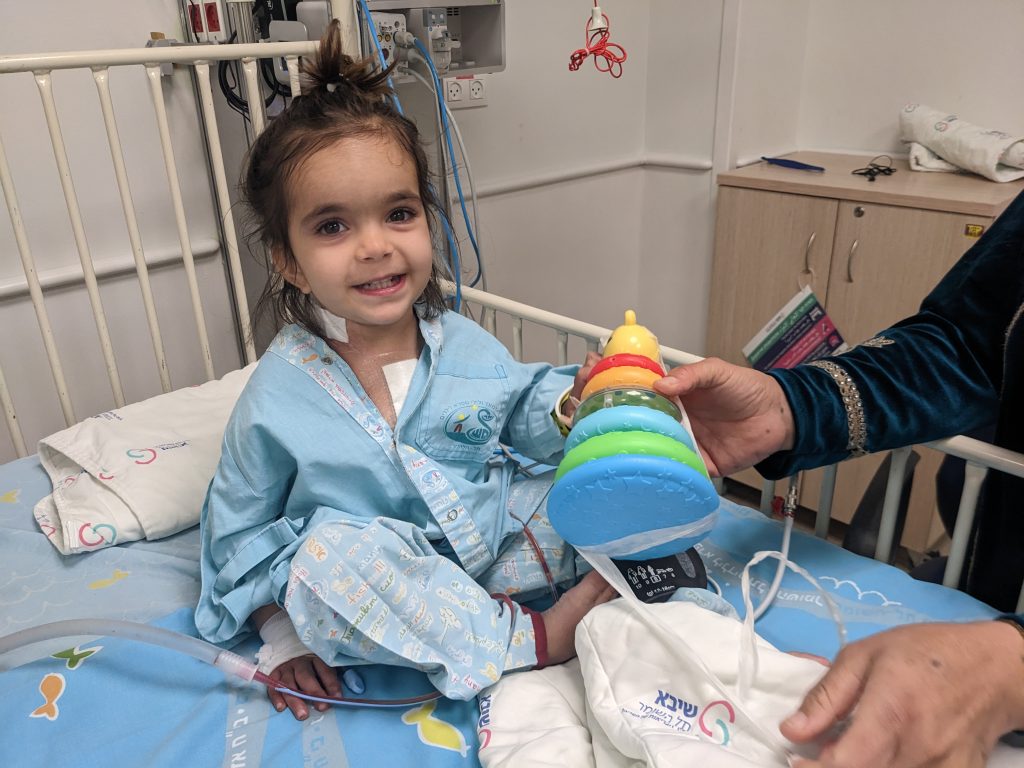 Maryana is doing very well after surgery. The doctors removed her oxygen support this morning and her oxygen saturation was 97%–much higher than Thursday’s 9%! 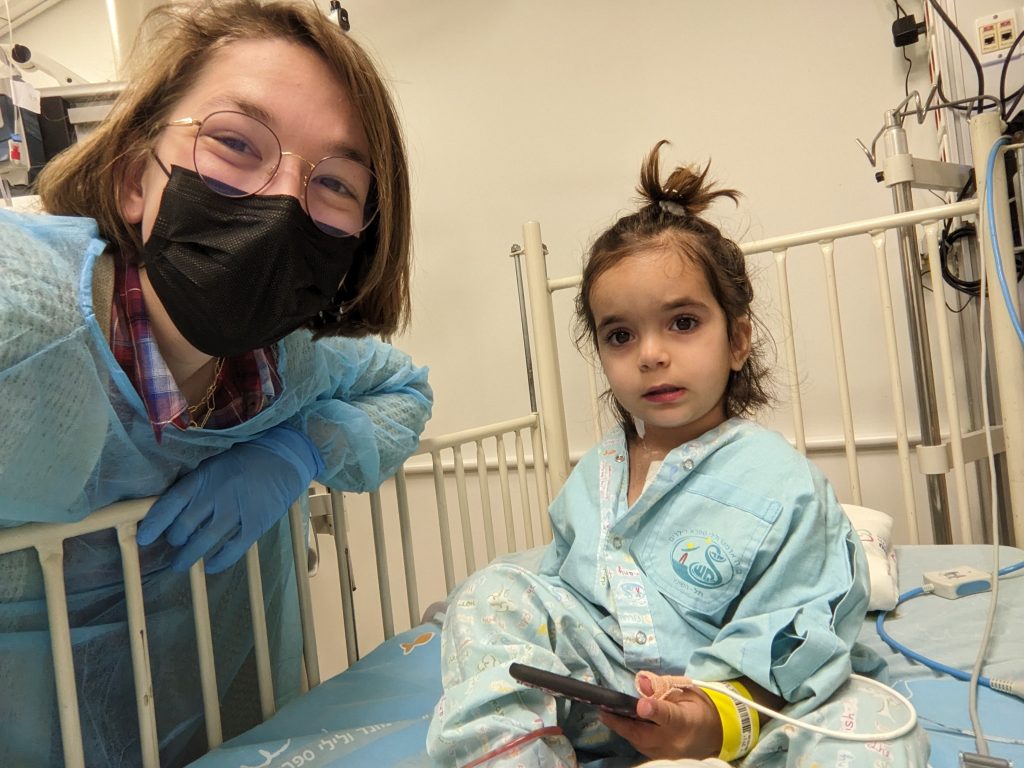 It was so good to get to know Maryana a little better today, especially now that she’s feeling so much better. She has the most beautiful eyes and an adorable grin, which she reluctantly agreed to show off for a photo. 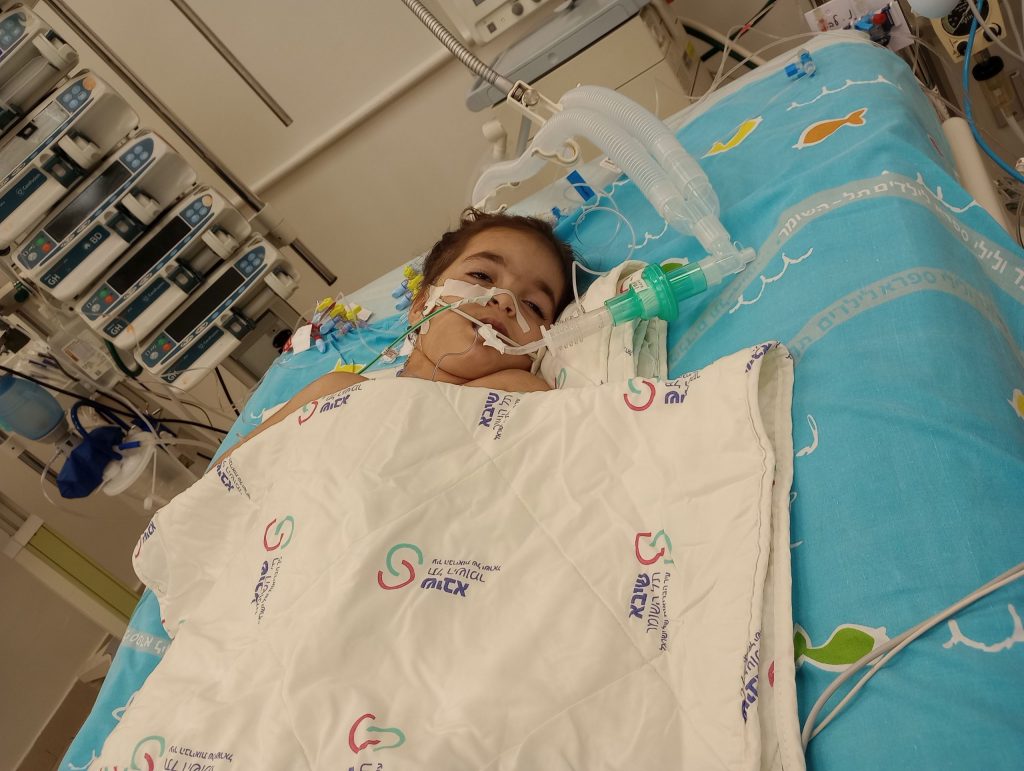 This morning we got surprisingly the message from Maryana’s mother that Maryana is going into surgery right now, only four days after her arrival in Israel. We were amazed how calm her mother stayed even though her daughter went into a big surgery. She stayed calm though the whole waiting time and showed me a lot of pictures of her other five kids back home in Kurdistan and her one grandchild! Maryana is her youngest child and loved so much by her whole family.

Only a few waiting-hours later, around four hours after Maryana went into surgery, her surgeon came out and reported that everything went well and Maryana is stable. One hour later her mother was allowed to see her daughter again and was full of joy to see her so good. With this surgery the doctors could completely fix her heart problems and it will allow her to have a normal life without Tet spills nearly every day. 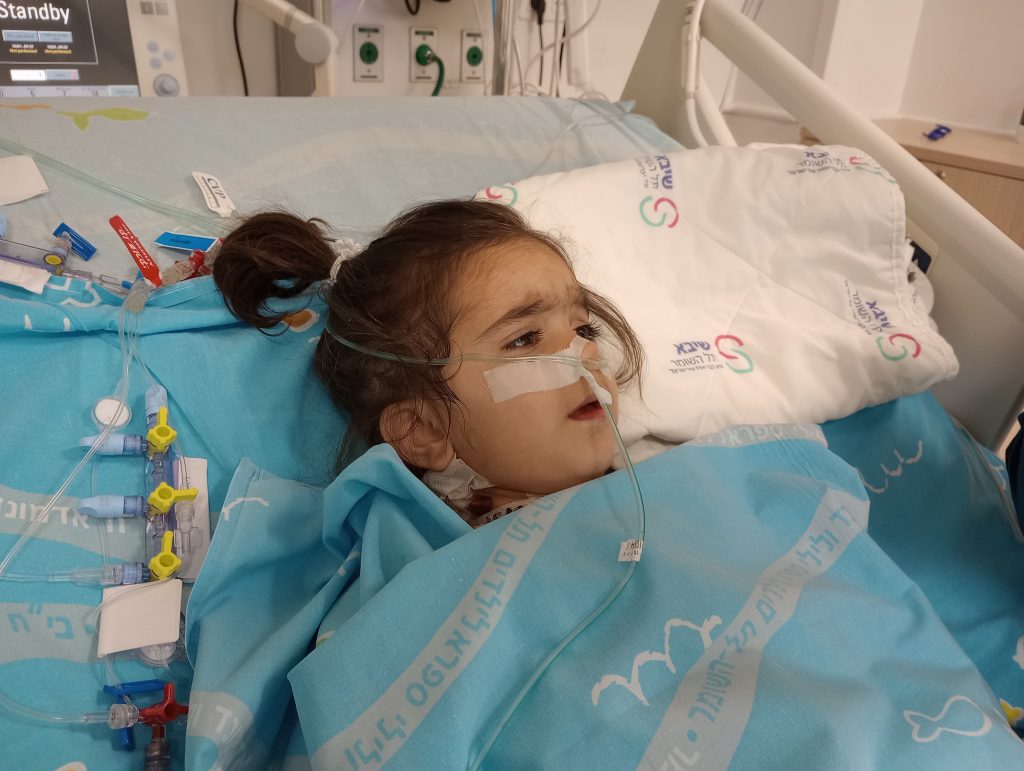 In the evening I saw that Maryana was already extubated and watching YouTube videos on the phone of her mother, what a great recovery! Thank you God for this successful day for Maryana! Thank you for giving her the chance of getting a normal life! 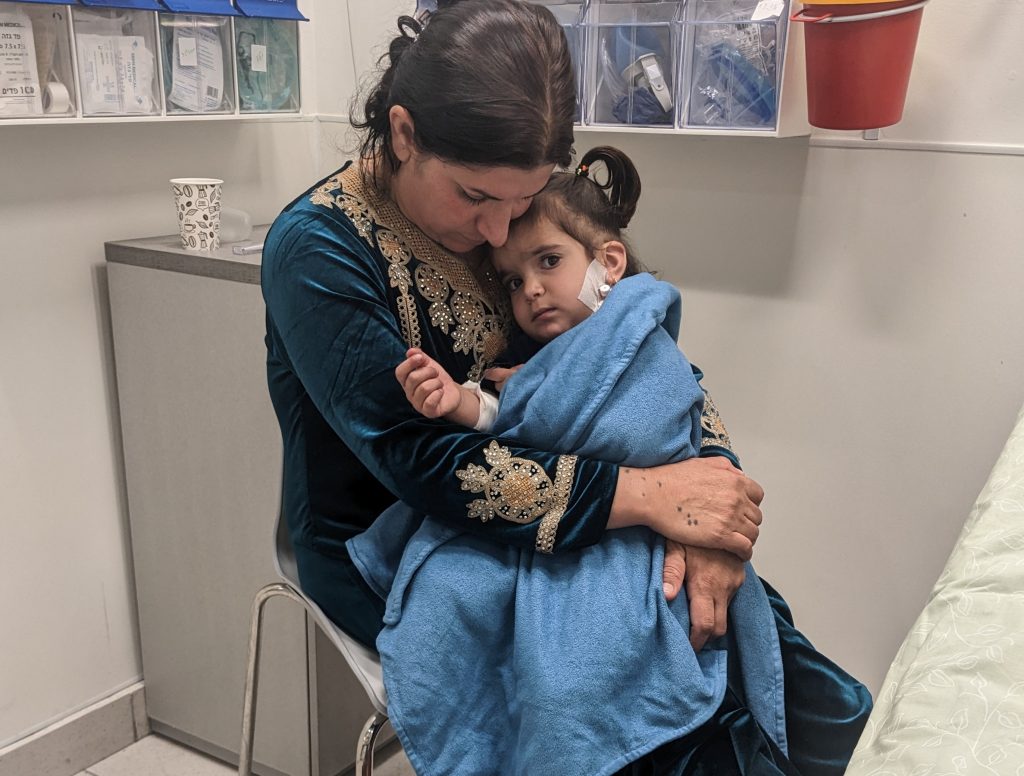 The paramedics rushed Maryana to Assuta hospital across the street, where with oxygen support and medication, the doctors were able to stabilize her. Maryana’s mother was absolutely incredible the whole time. She didn’t panic, even when her daughter, limp and very blue, was taken from her arms by a stranger. She just stayed calm, followed every instruction given to her, and waited patiently for news from the doctors.

Once Maryana was stabilized and the chaos was beginning to settle a bit, the doctor in the emergency room turned to me and said cheerfully, “Okay so she’s from Kurdistan, what exactly is she doing here?” It’s always a little hard to explain to someone who’s not familiar with Shevet, but the doctor took it all in stride and was excited for the opportunity to call the head cardiologist at Sheba, where Maryana was scheduled for her first appointment this Sunday. 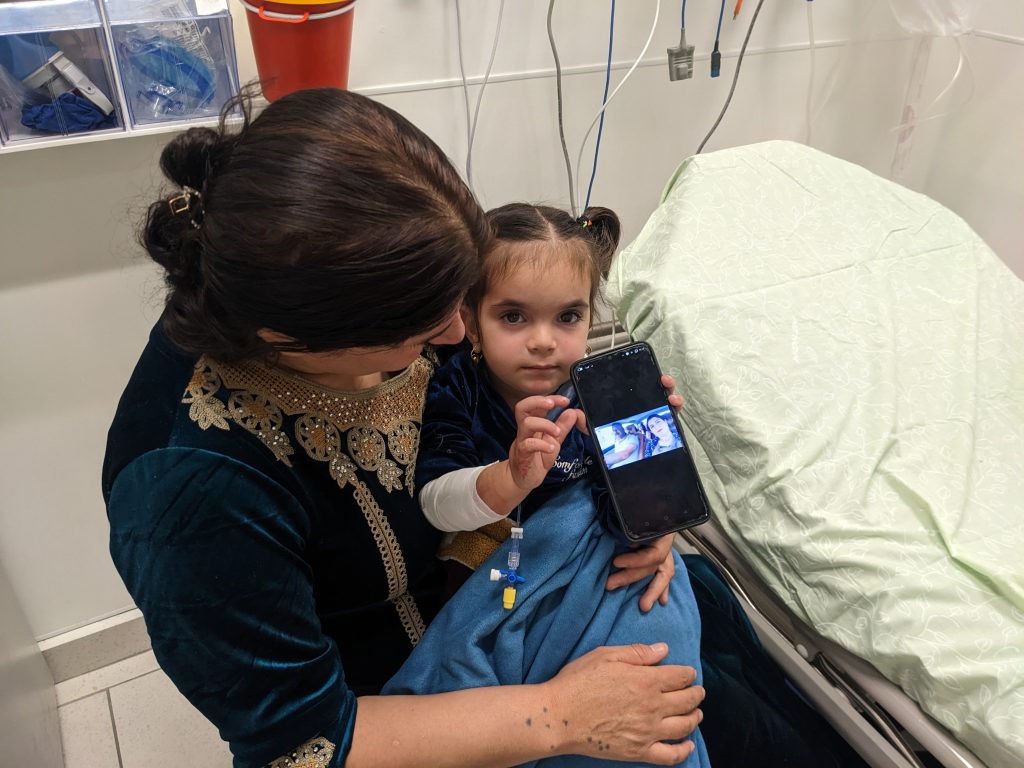 We waited several hours at Assuta for an ambulance to come transfer us to Sheba, where the pediatric ICU was preparing a room. Thank God, Maryana was feeling much better by then and was content to snuggle on her mom’s lap and show me videos of her family at home in Kurdistan. She was intrigued by the IV line in her arm and thought it was pretty funny to give her mom “shots” with the end of it, and was just a little disturbed that she couldn’t fit her shoe over her oxygen sensor.

At the end of a long day, an ambulance arrived and brought us to the ICU at Sheba to a room ready and waiting for her. Maryana was not especially pleased with the situation, and made the cardiologist work extra hard to get good echo images. 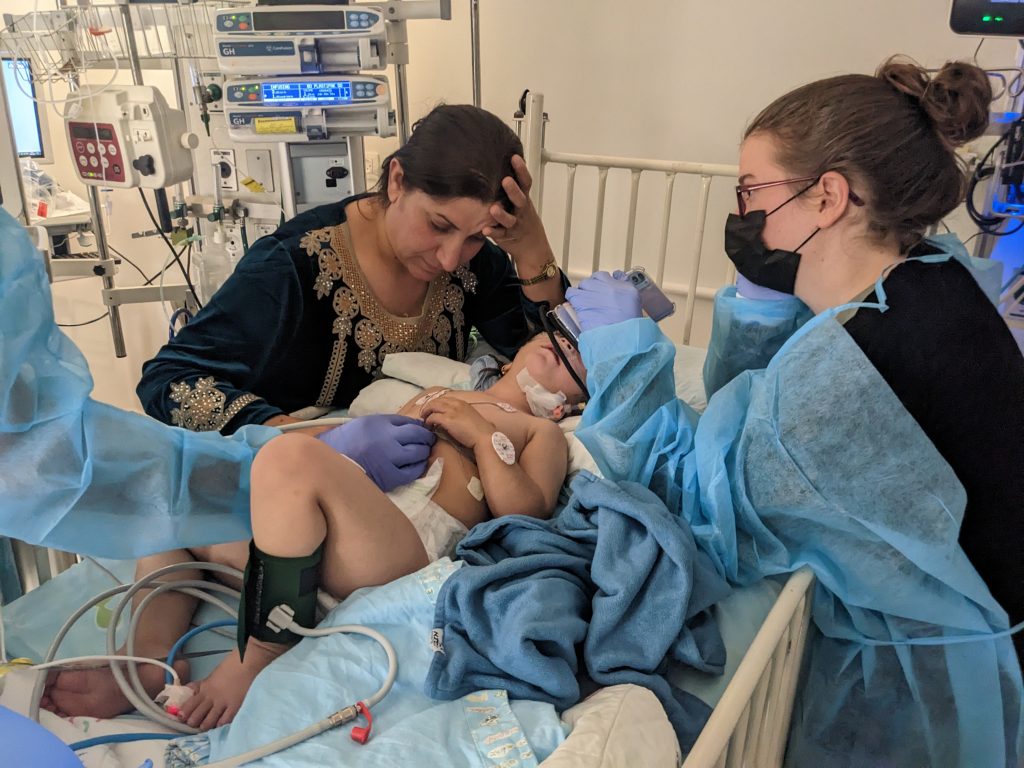 Some medicine to sedate her and a few YouTube videos helped, and she finally settled down to sleep, which meant her exhausted mother could get some rest too. 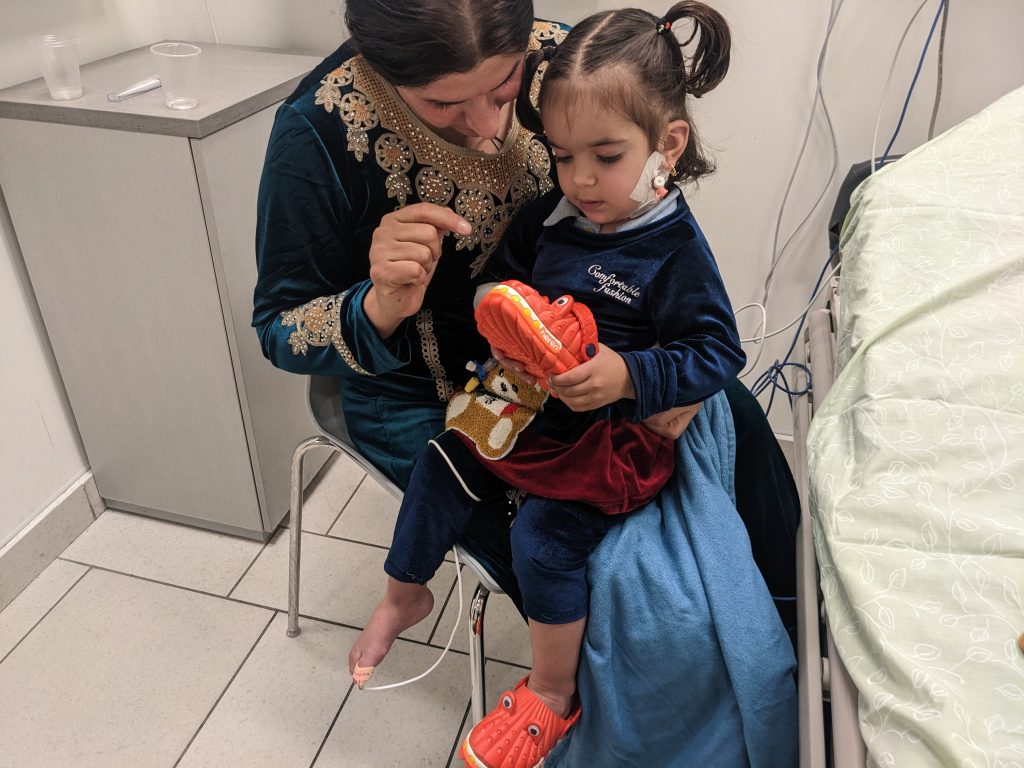 Maryana needs surgery soon to repair her heart defect so she will not continue to have episodes like this. 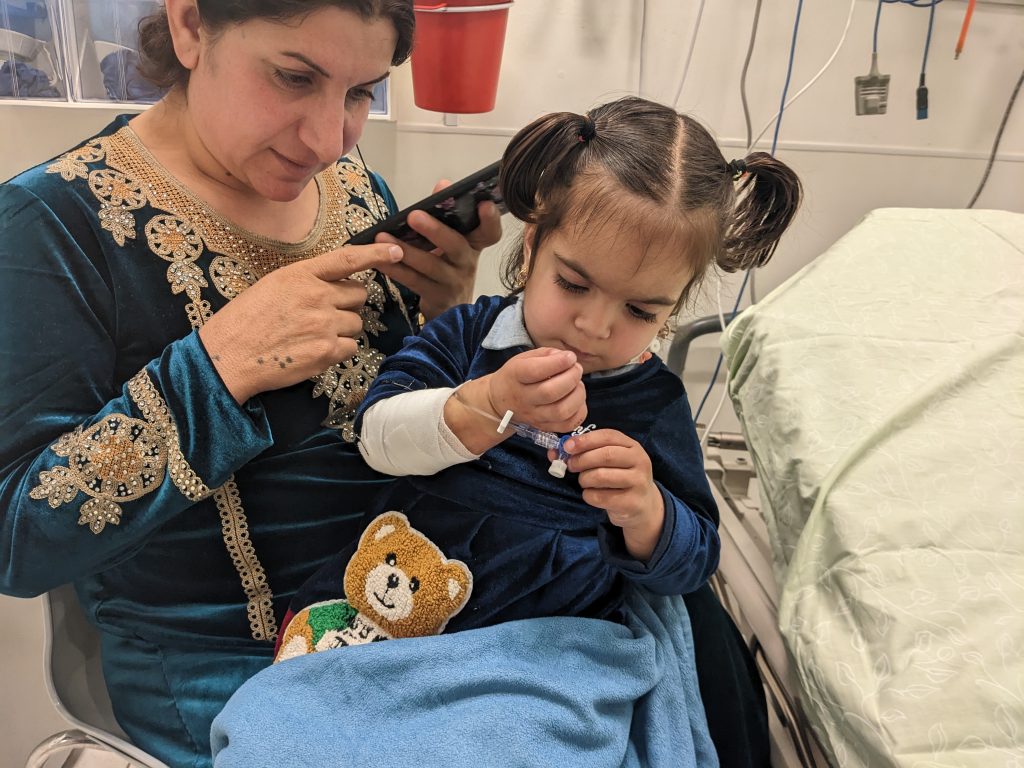 The cardiologists will meet on Sunday and discuss her case, and afterwards we will have a better idea of the next steps for her. Please pray for her and her mother as they settle into life in the ICU and wait for surgery.
Hide Comments Show Comments 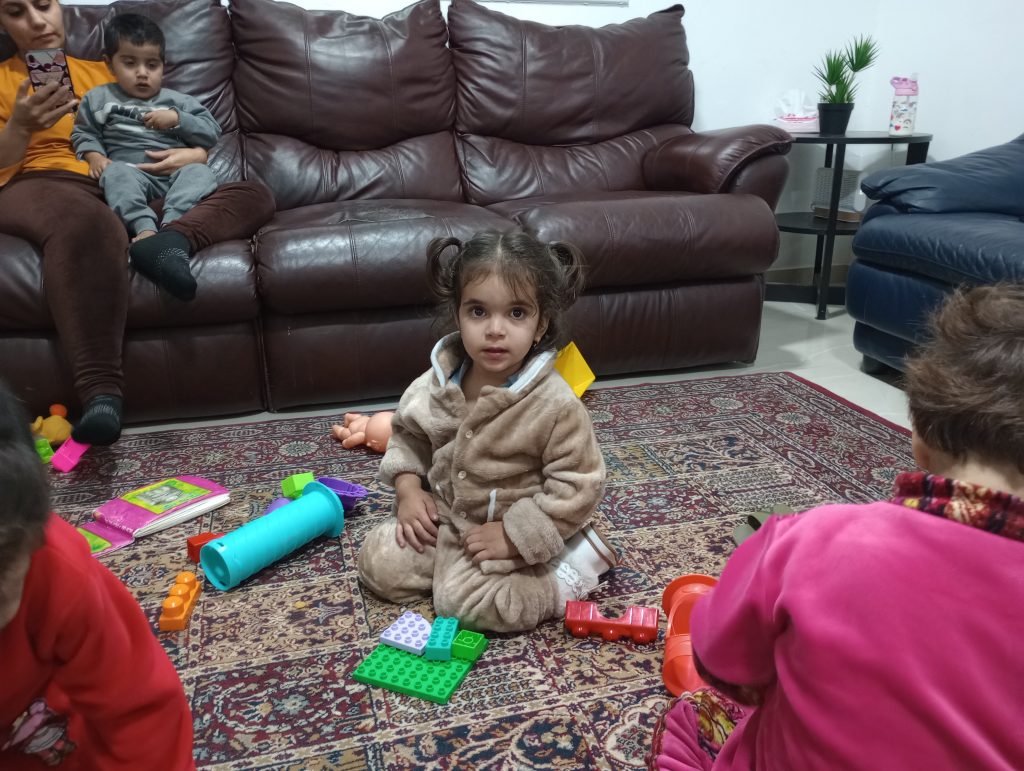 This evening we welcomed our new Kurdish child Maryana. Luisa and I picked her and her wonderful mom up at the airport and brought them here to Ashdod where they could get some rest and good Kurdish food that the other moms prepared for them. 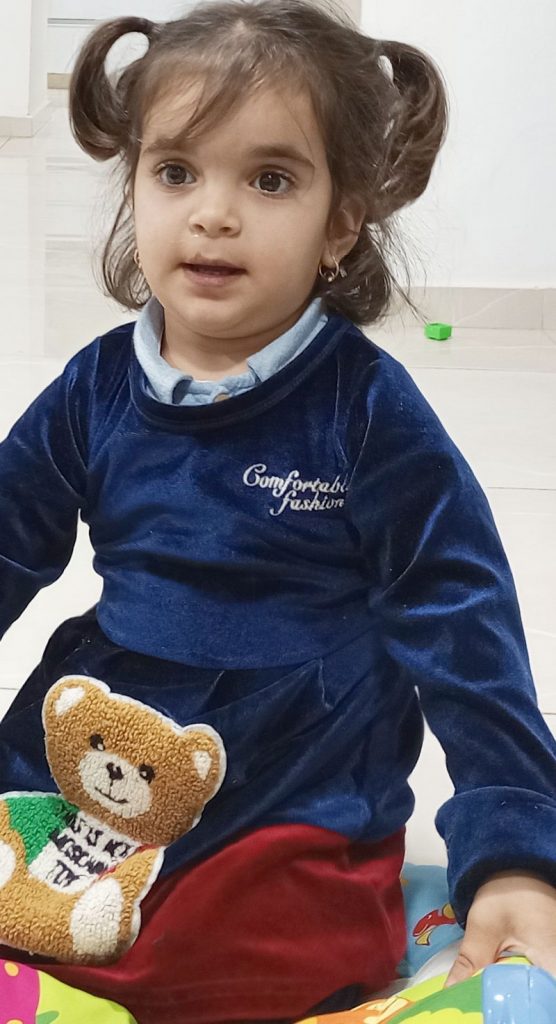 Maryana directly started playing with the other kids and seems to feel comfortable here. Her mom already knew two of the other moms so she was glad to come to a house where not everyone and everything is new. 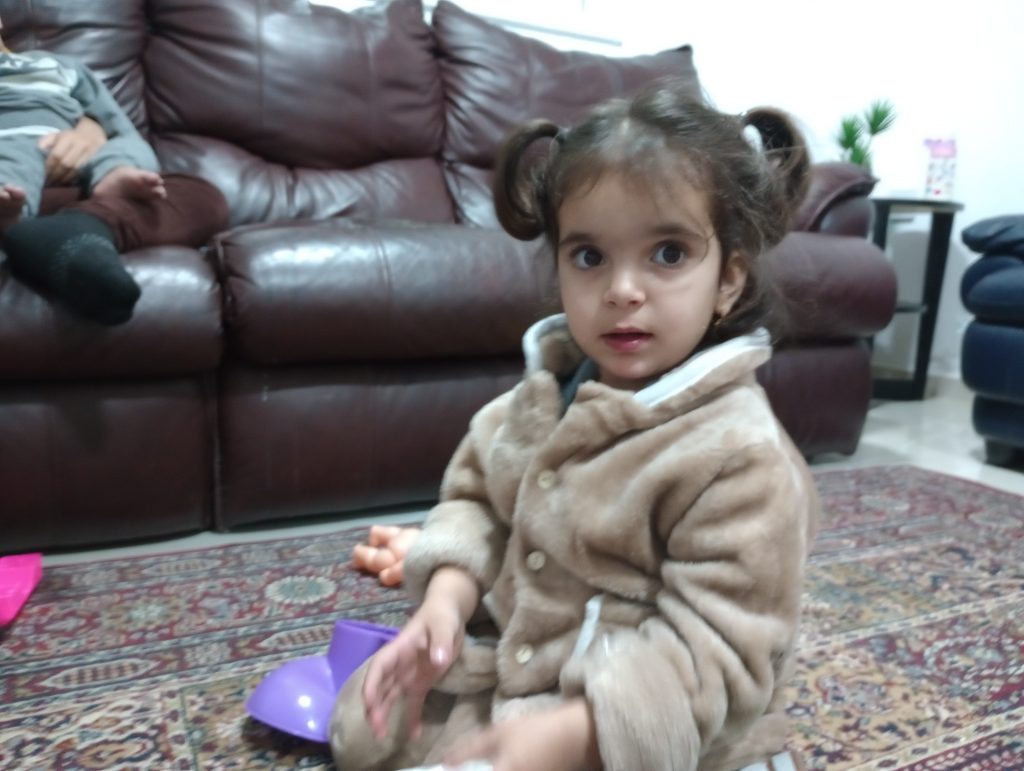 Maryana turned just two years old a few weeks ago and is diagnosed with Tetralogy of Fallot. This means that she also has frequent episodes of de-saturation and is turning blue for a couple of minutes. Please pray that in her time in our house, Maryana will stay stable and safe! Let us pray for a successful treatment for our cute girl! 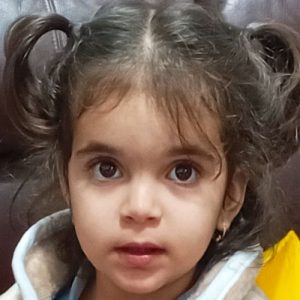 Maryana is a two year old child from Kurdistan, northern Iraq diagnosed with Tetralogy of Fallot.

Maryana does not yet have a local leader to advocate for prayer support for her surgery.

As of right now, Maryana still needs $0 toward surgery and related expenses.