Today, we had the pleasure to escort our handsome Jabali with his lovely grandmother to the airport. After celebrating their farewell with a wonderful, big, and colorful picnic yesterday, she couldn’t wait to head to Kurdistan today. Also in this small body, we can really see God’s greatness, power, and healing! He first stayed in the hospital for a long time. There, he also was diagnosed with blindness after his surgery. But, surprisingly, at home he recovered quickly. After just a few echoes the doctors said he is good to go home! And in addition to that, he even received the news of a healing of his blindness from the doctors! So we can really praise God for what He did in his life! It hasn’t been always easy for this family. His grandmother took the long way of a small village in Kurdistan to a foreign country to take care of him. And even though she had to deal with many difficulties, she kept going and did her best for her beautiful grandson. We will really miss her and her positive humorous spirit and our little ray of sunshine. May God continue to show his love to this family and especially encounter them, so they can know and trust in Him!
Hide Comments Show Comments Wow, what a day we all had at Sheba today! What an amazing privilege it is to bear witness to the miraculous works of our Father and see how He alone is where our hope lies. Jabali’s grandmother has been excited about her appointment today all week (She has mentioned many times that this will be her last appointment in Israel). Jabali was the third Shevet child of the day to be told by the cardiologist “you can go home”! It was so fun to watch his grandma look at me with a beaming smile and shake her hand in the air knowing full well that of course this healthy and healed boy is ready to return home. Jesus has healed this little boy’s broken heart and he has made his blind eyes see. What an amazing God we serve. Jabali has a beautiful temperament, almost always happy and peaceful. His grandmother also has these qualities and we are so grateful to have been able to meet them. We pray that as they return home this family will see the works of Jesus in Jabali’s life.
Hide Comments Show Comments Today we went to visit children in Sheba hospital. We saw a tiny baby called Aram and we then went to visit Leen. The grandmother who was with us had to take Jabali, her little grandson, for a blood test. After this was done, Magda and I had to take grandma to the Emergency room as she had a painful ear and swollen glands in her neck. We were asked to take her to the Ear, Nose, and Throat department to see a special doctor. The doctor examined her and prescribed drops for her ears. All this time Jabali was as good as gold; quiet and very contented as long as you didn’t put him in the carrier. We are just amazed with our Heavenly Father in regards to Jabali’s healing. Having recently heard a report that Jabali was suspected to be blind it is now thought that his eyes are recovering and with some work at home his vision should get better and better. There is so much hope for this little boy now. In addition today Jabali had a very positive echo and the doctors feel he is ready to begin reducing his medications. For Jabali this may mean he only has a short stay with us at Shevet before returning to Kurdistan. We are so pleased to now have him and Grandma home with us. Please pray that we are able to speak God’s truth and show God’s love in our time with these two. May they feel loved and welcome. Please also pray for Jabali’s continued healing.
Hide Comments Show Comments Jabali had his second MRI today. He has already had an MRI before, but since the first time he was moving too much they couldn’t get clear pictures so they did it again under sedation. We spent some time with his grandma waiting until he was finished. Grandma was a little worried about him being sedated, but the MRI went okay and we will find out the results in the following days. Please pray for Jabali that the results of this MRI will be good and there won’t be any problems.
Hide Comments Show Comments Today when I went to visit to our beautiful Jabali in his room, the nurse told me that he was having a echo at the moment. So, immediately I went to the echo area. I saw the doctor that was checking on him. But I couldn’t go into that room because he was in isolation. So, I could not spend too much time with them. I only heard our little baby crying and his amazing grandmother trying to calm him down. I waited until the doctor finished with them.
The doctor told me that his heart looks good, and his medication was going to decrease, but he had infection still in his wound.
Please continue pray for his fast recovery and also strength for his grandma in this time far away from home.
Hide Comments Show Comments Today the doctors are hopeful for Jabali to soon be discharged in our care. He is weaned off oxygen and eating a little. Praise God! We are waiting for the cardiologist and neurologist to sign off on his discharge. His grandmother remains hopeful to be out of the hospital soon.  Thank you for your prayers of recovery and wisdom for the doctors.

Today we went to visit our beautiful Jabali and it was a joy see some progress in this beautiful baby. He is eating, his oxygen is good, and also he is trying to have a little eye contact and was trying to smile. Grandma is so happy!  She wishes to be home! Today he was going to have an EEG but it wasn’t possible. Please pray for this beautiful baby and for his quick healing and also for strength for his amazing grandmother! I came to Jabali and his grandmother just at the right minute, when two nurses were preparing Jabali to leave his room and his confused and worried grandmother was standing in the middle trying to figure out what was going on. Jabali got an ultrasound of his brain today.  A nurse explained to me that the doctors are concerned about him because he does not smile. So they wanted to check his brain, fearing he could have an hemorrhage.

I went down with Jabali in his bed and his grandmother. She was so caring and lovely to Jabali. I could feel her deep love for him. Also I remember her talking about Jabali’s mother at my last visit. I had the impression that they are really a close and caring family and she is trying her best to take care of her sweet, small grandchild. The nurse at radiology was really friendly and explained to me that she does not see any signs of bleeding in her pictures. But the doctor will have a look at the pictures this afternoon and figure out the final result. Let us pray, that this small fellow does not have any bleeding and that his path and his next surgery will come soon and go smoothly without any complications. The Lord has been so good to our Jabali and he will be faithful to him – now and also for the way ahead of him. Our little Jabali’s heart continues doing well after the surgeries. He had another positive echo today and is handling room air (no supplemental oxygen) well. In this next week he will be seen by neurology and speech therapy to assess why he is not swallowing well and why he seems to have other neurological difficulties. Please pray for continued healing and that he will surprise the doctors with his quick  improvement. Smiley little Jabali has now progressed into secondary ICU and the hospital staff are quite hopeful he will be able to be discharged this week. His grandma is so happy that he is now doing much better. Today is his first day without oxygen, and so we are hoping that in the next days he is able to sustain his oxygen levels.
Please keep him in your prayers.
Hide Comments Show Comments Today, we received good news for Jabali. In the morning they closed his chest and it went well. He looks much better. Tomorrow they will start to reduce the medication. The grandmother is very happy about it. Please continue to pray for Jabali.

Our little Jabali went into his second big surgery today. He was born with Transposition of the Great Arteries, so today they planned to switch them. We waited with his sweet grandma for four hours surrounded by other mums who could speak Arabic. They were chatting the whole time which really helped his grandmother to be distracted. From time to time she also prayed and talked with her family in Kurdistan. In general the surgery was successful! The medical team was able to switch the great arteries but then he had a lot of bleeding so they started to give him medication. Unfortunately, he had an allergic reaction towards the medication, and his blood pressure dropped. But they were able to stabilize him and he is doing well for now. His chest is still open and they will a follow up with an x-ray. Please pray for a good recovery for Jabali from the surgery, and for him being stable for the next critical 24 hours. Please pray also that his bleeding will decrease and that they can close his chest soon. May the Lord protect him and his lovely grandmother.

Hide Comments Show Comments
The medical staff reported today that Jabali has had his chest closed. After the surgery on Thursday, his blood pressure was so high that his chest needed to be reopened. So it was good to hear today that he is stable and still intubated. His grandma was lovely, and came downstairs with us to see Nila’s mum who was in the ER. She says that Jabali’s mum has been crying and is worried. Jabali still needs our prayers, and so please lift him up to our Father and also for his family back in Kurdistan.
Hide Comments Show Comments
We went to the hospital to see Jabali and his grandmother. Jabali was supposed to have surgery at 11 AM. Unfortunately, the doctors had a hard time communicating with Jabali’s grandmother because of a language barrier. Just before the surgery, Jabali had some sugar water since he had been fasting for several hours. During the surgery, we were with the grandmother, who only speaks Kurdish. In the beginning, we had a lot of trouble understanding each other, but we made a workaround by writing and drawing on a piece of paper. The surgery went very well, but a lot of tubes were connected to Jabali, and it was disturbing to see Jabali lying still after seeing him moving and crying a few hours earlier.
Before the surgery, we prayed for a successful surgery and that God would bless Jabali’s little body. The surgery was a success, and Jabali’s next surgery will happen during next week. It’s amazing to see how God works through the doctors and nurses in the hospital.
Hide Comments Show Comments 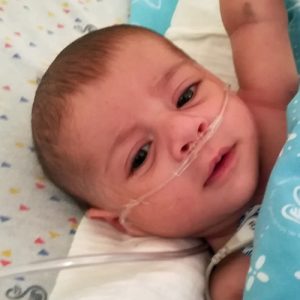 As of right now, Jabali still needs $6500 toward surgery and related expenses.