Today it was a great joy to hear that Ahmed was going to be discharged because his story is a real miracle. Surprisingly he spent only a few weeks in the hospital, being an emergency case at the beginning and now he is able to go home! When I went to his room I saw a big box with medication and a nurse talking to mom. When his mom saw me she had a beautiful, big smile and with her sweet voice she told me, “He is ready!” I was really thankful to God to see Ahmed with a beautiful color in his skin, without supplemental oxygen, without NG tube or any other machine. The nurse gave us all of the information that mom needs to take good care of his child. Also, because of the situation in Gaza the hospital gave them part of the medication that he needs to take, since it is so difficult to find it there. He will need some blood tests and follow-up in one week in Gaza, and in around one month he will come back to Israel for follow-up with the neurologist and cardiologist. I am sure that we will be so happy to see them again. Before we left the hospital one of the doctors who can speak Arabic answered every question that Mom had.
Finally we were ready to go and retrieve the car to leave the hospital. Before we took Ahmed back to Gaza, we needed to go first to the Shevet house to drop off one of our Kurdish families. This was great opportunity for some of our  volunteers to see her again and talk to her. She was really happy to see them and she was reminded that we are continually praying for her and for her beautiful family.
Finally Julio took  them to the border. She was very tired and fell asleep along the way. I can say that she felt the peace of God over them after all those days of suffering and now going back home with a healthy boy.
I was very happy to know that in a few minutes Ahmed was going to be with his father. I know that the situation in Gaza is so difficult but I also know that God loves them and He has everything under control. Dad will see that Ahmed is a new boy coming back home to him. Thanks to the Lord!
Hide Comments Show Comments

Because of Ahmed‘s lovely mum it is always a pleasure to visit the both of them in hospital. Her English is excellent so that we are often able to compare notes.

As soon as I got there, she started to update me about Ahmed’s condition. I realized that she informed herself very well. Firstly she told me that Ahmed had been able to drink around 5 cc of milk yesterday evening, explaining to me that he was indeed able to suckle but not swallow.  Besides I realized how sad she was about the fact that her baby’s voice is very week, almost non-existent.

Despite this, she is thankful and confident in general, as she told me that it must be a good sign that the doctors decided that it’s not necessary for her son to have a CT (as planned originally). Also she is aware that Ahmed’s lungs need their time to recover. And again she told me how relieved and thankful she is to be here with her baby, as there is tension in Gaza. When I left, I told Ahmed’s mum that I will pray for her baby and I want to encourage everyone who reads this to join in and pray for Ahmed to get stronger everyday and be able to eat. And let’s thank God for what He has done so far and will do!

Speaking with the mother of Ahmed is like talking to an old friend. She is one of those people who becomes instantly familiar. We are quick to connect on the truth we see in the room. Life in all its fragility is a miraculous work of God. In fact, in the last few weeks Ahmed’s mother has pondered whether the Arabic word for “miracle” should be part of Ahmed’s name. Since the time of his last blog we have a lot to praise God for in Ahmed’s life. His ischemia in his left leg and foot is starting to look much better with normal coloration returning. Ahmed is now extubated and breathing well with a little support from nasal cannula. I  addition his collapsed lung us gradually improving. To mum’s total delight she has been able to hear his small voice again as he cries. Today Ahmed was even being prepared to try having some milk orally for the first time since he was first born. It is rare to be able to speak as much in depth with guardians from Gaza due to the language barrier however, Ahmed’s mother is an English teacher which makes communication so easy. I asked her today how her family are and if they are all safe following the recent rockets fired. Thank God everyone at home is safe however, the children have had their school days cancelled. At home, Ahmed’s grandparents live in the apartment upstairs from them so his brothers are being well looked after although they miss their mother a lot. Please continue to pray for this precious and important little life. Please pray for Jesus to shine through our conversations with mum and would this be an opportunity for this family to know the truth of the Gospel. Today was the first time that I saw our beautiful and small Ahmed. He had his surgery few days ago. When I went to his room, a lovely nurse was with him. She was bathing him, and explained to me that he is still intubated because one of his lungs is collapse. Because of that he is on mechanical ventilation, tomorrow they are going to perform a procedure to find the reason for his collapsed lung, but thanks lord he is stable. He is really sweet and beautiful. A few minutes ago his mom came, she is so beautiful, and worried for her little baby, I prayed for them before we left. His life is a miracle and i know that God has everything in control. He has amazing plan for this little baby. Please join with me in prayer for healing for Ahmed and strength for his mom.
Hide Comments Show Comments
Sophie and I visited Ahmed today. I had seen his little body under the heat lamp yesterday, but only heard from the doctor that he was recovering well from his surgery the precious day and they were planning to extubate him.
So today when we returned to the ICU we had the real pleasure to meet his mum. She speaks English fluently, and it was so easy to chat with her. She joked that she has become a doctor for Ahmed during this time now. She is clearly an intelligent lady who wants to know and do everything which is the best for her son. She has 2 other children, and Ahmed is now 2 weeks old. She told us about how she had to take Ahmed to the doctor in Gaza on multiple occasions showing his dark skin and blue fingers before his heart defect was considered. Then, she thanks God for the miracle that her baby has been given permission to come into Israel for surgery. She described this as a miracle, and felt for sure that Ahmed would have died in Gaza with no surgery. We thanked God together that Ahmed’s great arteries have been switched successfully.
She explained that Ahmed was extubated yesterday, but unfortunately he needed to be reintubated, as his lungs couldn’t yet cope to breathe independently. Also she showed the signs of ischaemia on his left leg. Sophie and I were able to share the great testimony of healing in one of the babies here over the winter time, whose blood flowed back into the big black patches where there had been a lack of oxygen, and hopefully this was an encouragement for her.
So, we prayed together and it was a hopeful time, as she shared how she knows Ahmed is a miracle and we shared how God has seen her family and not forgotten her.
We are so thankful to be able to share the message of hope with her, and spend time together. Please keep Ahmed in your prayers!
Hide Comments Show Comments Ahmed was brought in from Gaza three days ago and had surgery. Today he will be extubated. Since there was no mother of father while we visited the ICU, the nurses did not want to give further details. 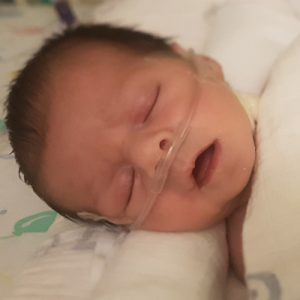 As of right now, Ahmed still needs $4500 toward surgery and related expenses.