Dear Leen had another day at the hospital today. She needed to have an EEG test, as she has started on a new medication. She was wearing a new princess face mask today which she was very happy about and proud of.

She greeted many people in the waiting area in Hebrew saying “Shalom, Shalom.”
The neurologist will meet with her and mum next week to discuss the results of today.
Hide Comments Show Comments

Leen is now back at our Shevet home in Jaffa. We have all really missed having her and her mum here.

She has been quite sleepy throughout the day before arriving home, but finally in the car journey to Shevet, we started to hear a little voice counting out “wahad, tnayn, talata.” (Arabic for 1,2,3). Leen’s trademark phrase!
By the time we got back home and her mum had cooked her some food, Leen was feeling very much back to her usual happy and sociable self.
She is behaving very sensibly about her eye, which she is not allowed to touch., Thankfully she doesn’t seem at all distressed or in any pain.
We are hoping by the time she has her check-up and three week’s time, her eye will have healed very nicely.
Hide Comments Show Comments

Leen’s surgery lasted about one and a half hours and went well without any complications. The doctors decided to operate on only one eye for today. In the waiting time that I’ve spent with Leen’s mom and coworker Georgia, Leen’s mom was busy answering messages and calls from family and friends, all of whom lovingly told her that they were thinking of her and praying for Leen.

After some time, we went together to a supermarket (there is one in the hospital) to buy snacks and juice to make the time go by faster. Even an hour and a half can seem like a long time when you’re waiting for good news.

Just before the surgery was completed, Leen’s mom became very nervous and restless, which was manifested by tapping with her legs and tapping with her fingers. Unfortunately, I could not say any words of comfort or reassurance to her, as I do not speak Arabic. However, I think it was good to just be with her and hopefully make the waiting time a little more bearable. Leen’s mother was filled with joy when she was finally able to go in and see her daughter, still sleeping in the recovery room. Her own ambulance then drove Leen back to the eye clinic, where she settled back in to rest, but not before her mother coaxed a first smile from her.

Leen’s mother and father were both profoundly touched and so grateful that this day has finally arrived. We joined with them in giving thanks and glory to God for his lovingkindness to us all, before Leen waved us out the door: Today was a very busy day for Leen and her mom. It was the first time that Leen went to a dentist and she was scared. She had just experienced a covid test a few minutes before which is always really unpleasant. The dentist said that she should have a bigger treatment to get rid of the pain with her teeth which she has almost every day. After that, we went to the EEG to check that everything was in order for her eye surgery tomorrow, but were unpleasantly notified instead that doctors have found ‘intense epileptic activity’ in her brain. This wasn‘t easy for her mom to absorb because she thought that the eye surgery would be the last big hurdle for Leen, and now there is another.

Medicine for this condition will be administered for Leen so we can pray that this will help. Right now, they are waiting for the eye surgery to proceed as planned tomorrow.

Will you pray with us for the doctors and their medical staff, that they will have wisdom on how to proceed? They are unsure at this point if they are to do both eyes or just one tomorrow. At Leen’s neurology appointment today, there would be a medical assessment of her brain MRI which she had a few months previously. Leen has a cyst in her brain, and requires a brain scan every year to check whether it has grown.
Thankfully, the neurologist confirmed today that the cyst has not grown, which is really good news. The neurologist examined her with a view to approve her to be able to go ahead with her corrective eye-surgery later this week and to be able to have a general anaesthetic.
Leen will be hospitalised tomorrow and will have an EEG to make definitely sure she can have the surgery.
She was happy as usual during the appointment and her mother also was helpful and kind with the other families from Gaza today. It is a real pleasure to have them both at our home during the wait for surgery.
Hide Comments Show Comments

Leen’s mother this morning requested that I take a photo of Leen to post online, so that people all around the world can pray for Leen. Her mother is always so thoughtful and kind, often diligently caring for our home and family. She prays constantly for her daughter and has been waiting patiently for an appointment for Leen’s eye surgery and also to discuss the results of her brain MRI.

We can learn a lot from Leen’s mother, of her stewardship in caring for what God has provided and by her kindness. Leen herself is a joy and full of energy. She loves playing with the other children and is a sister to all.

Please pray for Leen, that her health and joy would flourish. We also pray for Leen’s family as well, as they are waiting for Leen to return stronger than ever.

Hide Comments Show Comments
The first word I think of for Leen and the time she’s had with us is thriving. She’s been enjoying the time with our community and with the other families. You can see how well-loved this girl is when you look at the smile on her face.

Her mother is constantly baking and coming up with new games to play with Leen, even getting the other children involved as well. Today Leen enjoyed using a tube as her mode of communication, taking the other end to others’ ears like playing a game of telephone. It is so sweet to see how much Leen has been growing in her time here. Each day she gets more comfortable with everyone and comes more out of her shell. We are thankful for the good news of Leen’s upcoming eye surgery and we pray for this time of waiting to be a blessing for Leen and her mother. Today, beautiful Leen had two back-to-back appointments at Sheba Hospital where she was cleared for corrective surgery for one of her eyes.

The operation has an 80% success rate which is very encouraging. Her mum was astute and thorough in making sure she understood everything, and Leen was a trooper, enduring a long day full of doctors offices and tests.

She did wonderfully and brought her lively spirit to each moment. One of my favourite moments of the day was when we were waiting for the neurologist and she took a book out of my purse and pretended to read it in English. When she realized it didn’t have pictures, she used her hand as a phone to dial the police because I hadn’t brought any children’s stories. Her mum and I got a kick out of this.

Thanks to God for a blessed and happy day for Leen. Please pray for the timing of the surgery, especially as Leen’s mum has other children in Gaza who miss her.

Leen warmly greeted me this morning with a hug and said, “Morning!” She was dressed in a beautiful red and white polka-dot dress, ready and eager to travel to her ophthalmology appointment today. Her mother mentioned how Leen has been waiting for this appointment for more than a year. She was hoping to have Strabismus Surgery last year, but it was delayed. Today Leen was finally able to see an eye doctor and undergo various tests. Throughout the day, God provided different people to help with translation and even company for Leen. It was lovely to see neighbors helping each other. She will have more appointments with neurology and ophthalmology, with the hope that she will be cleared for Strabismus Surgery in both eyes.
Leen and her mother were both a joy to spend time with. Her mother has a beautiful, kind, generous, and grateful heart. She would sacrifice everything or stay for however long, all for her daughter to be well. Leen is so full of curiosity and joy. We enjoyed playing together in the hot air balloon and playing with various balloons in the hospital. They both have been a blessing to our community. Please continue to pray for Leen as she waits for these appointments. I hope that her joy will continue to multiply.
Hide Comments Show Comments Leen’s appointment was set at 11:00 today, but co-worker Nicolle and I were waiting at the Erez Border Crossing at 12:30. Many people passed through the border, but there was no sight of any mother and her three-year-old daughter.
We waited and made a few calls to the hospital to let them know that we were still waiting and would be late. We inquired about how late would they be willing to see Leen today. The answer from the hospital, communicated to coworker Georgia was, “She can come at 15:00, but not a minute after.”
It takes about an hour for us to travel from the border to the hospital. It was 13:30 and honestly, we were losing hope. We thought that God would make a way if planned, but if not, then we would still welcome her to stay with us at our Shevet coastal home. At 13:57 we spotted Leen, and quickly traveled to the hospital to arrive at 14:59. God allowed for perfect timing, as always. God has brought Leen to Israel for a specific reason.
The cardiologist graciously saw Leen. Her heart is looking well, meaning there was a good result of the pulmonary dilation catheterization from January 2019. She is staying at the our Jaffa home tonight so she can have an eye and brain assessment, which hopefully will be tomorrow. Praise God for the time spent with Leen. Though she is often timid and scared of new surroundings, she quickly became friends with Nicolle. She even had the opportunity to explore the beach nearby.
Hide Comments Show Comments 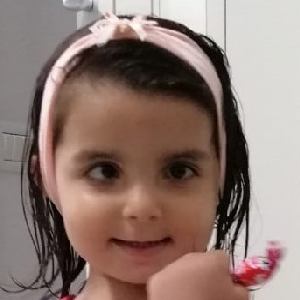 As of right now, Leen still needs $0 toward surgery and related expenses.