After a vacation back home in Gaza, Mostafa returned on August 1 for his diagnostic catheterization. Doctors found that the anatomy and pressures of his heart are suitable for the next stage surgery, called the Glenn procedure.


While not a full repair, this procedure helps increase oxygenation and allows a child to grow into a productive adulthood.


Mostafa returned home August 2 and is awaiting the call to return, God willing, for his surgery.

When Sophie and I came to the ICU, we knew that we had to visit three children from Gaza. One of them was little Mostafa. I didn’t know what he or his mum looked like but I noticed this one woman peering shyly out of room a couple of times. It turned out that it was Mostafa‘s lovely mum. When we entered the room the little one was sleeping. He had a fever which is why he couldn’t have his cath today as planned. The nurse said that he could stay until Tuesday. However it was very nice time we spent there. We were able to pray for Mostafa and his mum showed us some beautiful pictures of Mostafa and his two older brothers. Please pray that he will have a successful cath so that he can go home to play with his brothers again! Today Georgia, Yousef, and I drove to Erez crossing to pick up nine month old Mostafa and his mother! He was scheduled to have a diagnostic cath tomorrow, but please pray for him because this evening the hospital called to say he was running a temperature, which means if he continues with a fever, he cannot have a cath tomorrow, and may have to go back to Gaza.  During his assessment before the admission today, he didn’t have a temperature, however his mother did say he felt warm, but that it was probably from the stress of his teeth coming in. He had a procedure here when he was two months old, and tomorrow’s cath was intended to see how his heart is doing, and what the next steps are because. We ask God to heal Mostafa’s body of whatever is causing the fever, so that the doctors can see what treatment he needs for his other heart defects. He did so well today with all of the initial assessment. At first he was very upset when they performed the echo, but he calmed down to the point of falling asleep on the table. While he was asleep and we waited for the doctor, his mom and I talked and shared photos of family; she was also curious to know more about two of our Gaza coordinators, Yousef and Amar, so we chatted about their family. Throughout the day Reem’s mum and  Omar’s mum, both from Gaza, came to introduce themselves to Mostafa’s mum, as well, so this was really nice to see them form a community within the hospital. We know that Mostafa is in God’s hands, and we can trust him with this little one. As we left, Mostafa and Yousef took a picture together; it must be very significant for the families in Gaza to meet Yousef, who has worked long hours to secure appointments for their children to get the care they need, and sweet moments like this one is like a snapshot of the Gospel to these families, Jesus after all says that people will know we’re Christians, not based on how strictly we follow dogma, but by our love. We love, because he first loved us, and what a privilege it is to extend that to these families.
Hide Comments Show Comments As a newborn Mostafa was rushed from Gaza to the Sheba Medical Center in Israel for life-saving heart surgery. He was successfully rescued and returned to his family, but doctors told the family that due to the nature of his multiple congenital heart defects, Mostafa would have to undergo at least two more surgeries as he grows. Now at age nine months Mostafa is just clinging on to life with oxygen levels 65% of normal. He is past due for his second surgery, but the Palestinian ministry of health, which sent Mostafa out for his first surgery, is no longer willing to refer children to Israel due to tax disputes. Sheba doctors tell us that Mostafa’s condition is urgent. Unless there is an intercessor to get Mostafa back to Israel, he does not have long to live. 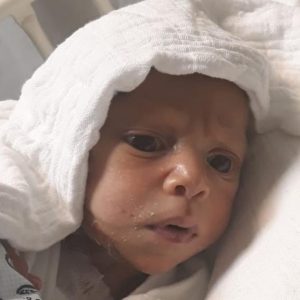 The confirmation class at the Reformed Church in Jegenstorf, Switzerland collected funds to help pay for Mostafa's surgery.

As of right now, Mostafa still needs $3845 toward surgery and related expenses.