It’s been three long days for Ricky and his mom. The day before yesterday we went to the hospital for an ultrasound that the doctor had asked for. Before visiting, we received a letter from Ricky’s doctor. In the letter, the doctor had explained about Ricky’s situation and what medicine we should find for him. The medicine may be found in Kurdistan but is still difficult to obtain. Ricky’s mother was a little disappointed because she had expected to get the medicine here in Israel. In the letter we read that they wanted to see Ricky again in about six months. Yesterday, Ricky and his mom started packing for the return trip home to Kurdistan. The mother was sad and did not feel so happy. She had more expectations from the doctors here. Ricky’s mom told us that before leaving, she wanted to visit Jerusalem so today we went to enjoy the city before their flight. We had a very nice day. They also bought some presents. After the Jerusalem visit we went to the Ben Gurion airport. We could see that the mother was both sad but also a little happy to return to her family and meet her second son. We said goodbye and Ricky was blowing kisses. We will miss Ricky and his mother here in Israel, bu it’s not over for them here, we will continue to pray! Please continue with your prayers too.

Today was the most important day for Ricky’s mother because it was the day when the doctors were going to tell her if it is possible to operate on Ricky or start a treatment for him. They were going to explain what the options are for him. We had two appointments today; the first one with a professor and his team. He explained all the tests they did for him and sadly told her that they can not operate, and they can’t help the right eye with surgery. He mentioned the option of an experimental medicine but because he is not an Israeli citizen they can not give this experimental drug that is produced only by two medical companies. This new medicine will help both tumors: the one in the eye and the other one in his back.

While we were waiting we had the chance to have a small walk in the town and have a piece of pizza which Ricky loves. He was really happy on the playground. Later in the afternoon we met another doctor who also explained the same thing but recommended to stop the chemotherapy and return to Kurdistan. She offered to contact those companies to see if they can provide it and deliver to Kurdistan. This doctor said that if they do not succeed getting the medicine she will write a letter so that we can contact them directly.

It was a very difficult day for the mother but we know the Lord is working on healing Ricky. He might have his last ultrasound on the 31st but the medical team will confirm next Sunday afternoon if he really needs to do it or not. They will also update us about the medicine. Please keep praying for both of them, especially the mother because this could sadly be their last week here here. in Israel.

Ricky had a neurological examination. It went well and Ricky had fun with the doctor who made him laugh a lot. This time was not so fun for his mother since she had a headache and some pain in her kidneys. The neurologist asked questions about Ricky’s childhood and how he was when he was a baby. And she had nothing remarkable to say about his neurological condition

His mother is still hopeful for good news on Thursday when all the doctors discuss Ricky’s treatment plan. We hope that they can give help him here in Israel! Please be praying.

Today we went again to the Tel Aviv Medical Center for another meeting with the oncologist for Ricky. As soon as we arrived, we were shown to the oncologist. Once we were in the right place, the doctor read all his documents from Kurdistan. During this time Ricky’s mother sat on the chair very nervously and you could see the fear in her eyes.

The doctor wanted to examine Ricky and he was very good to do everything the doctor told him. At one point, Ricky told me, “Please Tara, tell the doctor that it hurts in my stomach and I have a lot of sores in my mouth.”

The oncologist explained to us that the brain tumor will not be operated. They must leave it there and also he explained that they shouldn’t give Ricky more chemical treatment for a few months. And for the tumor on Ricky’s back, they still don’t know what to do. She also explained a new medicine which they have here in Israel but just for Israeli children and she thought that we maybe could find it in Kurdistan. All the doctors will have a meeting on Wednesday and then they will give us a answer. All this time Ricky’s mother waited for me to translate and explain for her what the doctor told me. This was tough.  His mother got all the information but one of the biggest questions was if Ricky could be blind? The oncologist sad that most of the children do have degraded vision but we will have to wait and see. Ricky had some pain in his eyes because of the sun, so he had to take my sunglasses.

We left the doctor and the hospital with sadness. Please pray for Ricky and his mother and to give them they peace they need. So after all the optics test, the doctor told us that his sight has deteriorated. One of the tumors has affected the nerve to his eyes and so both of his eyes are affected. She will send all the information to his doctors to make some decisions about the treatment he will get here in Israel. Surgery is an option but still they don’t know. The mother of Ricky was worried and wanted to know if he could be blind in the future… the doctor didn’t know this.

He also had an important  MRI scan today. This took a while and because he needed sedation, Ricky had to fast all day, he was very hungry and asked for ice cream many times. After a long wait, we went in for the MRI. His mother took him in and came out very sad, as she didn’t want to leave him there alone.

She waited eagerly for an hour as the scan took place, and ran back to him when the doctors called for her. Ricky was still tired and sleepy. During the first ten minutes of waking, he was ill and vomited. After this we took home a very tired Ricky, and he still wanted ice cream…! A warm welcome to Ricky and his mother. After a long overnight of travel the were able to made it to Israel this morning. He is suffering from neurofibromatosis with heart complications. He is a special case because of the love, respect and admiration we have for his parents who have been working for the Lord’s glory for many years. His short life has been very difficult with his very complicated case.

We pray that the specialized center he is going to in Tel Aviv starting next Sunday morning, will be bring his complete healing. We know that our Lord “Rafa” (healer) has a special purpose for him and the rest of the family. I could see the weariness and desperation on the face of Ricky’s father when I met him in the hospital in northern Iraq. He’s been working for many years with the bible society to make the word of God available to his people, but now all his efforts are focused on healing for his son. Ricky is suffering from neurofibromatosis and an optic glioma which is threatening his sight in one eye, and has also caused heart complications. The Tel Aviv Medical Center has an international center for neurofibromatosis, and has agreed to accept Ricky for half the normal cost. 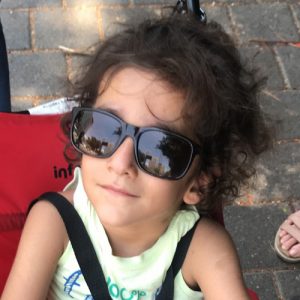 Ricky is a four year old child from a Kurdish family in northern Iraq diagnosed with Neurofibromatosis with heart complications.

As of right now, Ricky still needs $28000 toward surgery and related expenses.