What a joyous afternoon to celebrate Darbaz’s second farewell party. The first one was 7 years ago, so this party was an important milestone marking the completion of his heart treatment. He has been a good friend for Musa and the nursing team so we will miss him a lot! Thank God everything went well with Darbaz. His last echo was very good and the doctor was very happy to discharge him! We had a great time at his farewell – beautiful words of appreciation and music, Musa played the drums and Darbaz played the guitar! What a duo! It was an incredible time! We thank God for his life and we pray that one day he will follow Him and trust in Him only! At the airport everything went smoothly; they didn’t take long to do security and pretty soon we were ready to hug them goodbye and send him and dad with God’s blessing! While waiting in Amman he was connected to the internet and called Musa because he was already missing him – A beautiful friendship that was born in the middle of difficult times! Very soon, God willing, they will meet again in Kurdistan and enjoy their new hearts!

Darbaz had his final check today – and he can go home to Iraq! After enduring a blood draw, ECG, and a final echocardiogram, Darbaz was released to make plans for home.  His oxygen levels are now 96%— a level his body has never before seen! Below, Darbaz and his dad pose with pediatric cardiologist Dr. Sharon.  At today’s vudit, she gave a satisfied smile and said, “I’m really happy with what we’ve been able to do for Darbaz.” I hear that party plans are underway! Sweet Darbaz had a very positive echo today! While we waited for the echo Darbaz video chatted his mum, who, like him and his father, is truly so kind. We were called in, by the doctor who did an echo, and she was so happy with his condition after his cath. She added another medicine to help his body adjust further, but other than that he will have a blood test and another echo in one week, and hopefully that will be all he needs! It was so wonderful to hear that this precious boy is healing, his saturation was in the nineties today, when it had been in the eighties last week, praise God. We love Darbaz and his father and thank God for their lives!
Hide Comments Show Comments

It was a long but fruitful day for Darbaz and his father. At around 10.30am Darbaz was taken for a catheterization. His father was so hospital to me, Moshe and Rahel who were visiting Sheba. He offered us sweets and a seat with him. He was very calm throughout the day but I noticed that even so he couldn’t stop himself from looking at the theatre door every few minutes. After 5 hours the procedure had finished. We learned that the doctors had been able to close the hole in Darbaz’s heart and also work on a vessel to dilate it in order to increase blood flow to the brain.
This may be the only intervention Darbaz requires in Israel. Please pray that this is the case and that this lovely young man can return home soon.
Hide Comments Show Comments This is second visit of Darbaz to Israel. The first time was with his mother and now is with his father. Darbaz is the last of 5 brothers and 4 sisters. He has been admitted for his cath tomorrow. The process takes time and his father is always with him; they are like friends. Yesterday we returned the ECG Holter test back to the hospital and today the performed one more echo and one more ECG. The doctor also asked for a new x-ray. The surgeon explain to the father that the purpose of the cath is both diagnostic and therapeutic. The cardiologist will try to close the (DIVL) Double Inlet Left Ventricle problem in his heart. Darbaz was very happy and exited to be in the hospital and asking if they were going to be alone. The nurses told us that other families may come later. Now we just need to pray that the Lord will give wisdom to the surgeons and all the staff at the hospital to perform a great cath. It was a short and sweet visit to Sheba for Darbaz and his father today. He was fitted with and ECG holter to wear for the next 24 hours to monitor his heart activity.
It was really funny trying to find the room where the holter would be fitted as it is in a very remote part of Sheba and we all had a bit of a laugh taking a few wrong turns through the maze like corridors in the adult heart building.
In 2 days time Darbaz will return to Sheba in order to be admitted for his catheterization. Please pray that the next 2 days are full of joy for him and his father as they spend time with the community.
Hide Comments Show Comments

Darbaz is teenager from Kurdistan. Today he had his first assessment after 6 years since he was first operated here in Israel (at Sheba hospital). The cardiologist explained everything to his dad and Darbaz, even making a drawing on paper, showing the difference between a healthy heart and Darbaz’s. She said that they need to close the fenestration through a cath that is going to be both diagnostic and therapeutic. First they will explore his heart and after they will be able to close the hole with a little balloon or a device. Hopefully it is the only procedure Darbaz is going to need. If this is approved and everything else is fine, then the cath will happen next Thursday. So we need to bring him at 11 o’clock this Wednesday. For the arrhythmia episode he is presenting, he needs a Holter test so we need to bring him tomorrow morning.

Darbaz is a very calm and relaxed young boy, please remember him and his father in your prayers. He is not eating properly and has a little flu, so he needs to rest and be well before next Thursday for the cath.

Hide Comments Show Comments
Darbaz and his father arrived to Israel this morning with two other families from Kurdistan. This is his second time in Israel now, as he is coming back for a second surgery. He was proud to show off a very cool haircut! His oxygen saturation and heart rate were fluctuating a little when we were checking him at the airport, but overall thank God that his condition was stable and we were able to bring him back home with the others.
They are joining a full house of families, including Musa who is around the same age, so hopefully they will find a friendship.
Please pray for him and his father to settle in well here and quickly to feel like part of our family.
Please also pray for God’s favour over his hospital scheduling.
Hide Comments Show Comments 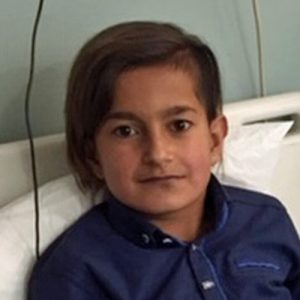 As of right now, Darbaz still needs $6500 toward surgery and related expenses.