Today Ruth and I had the privilege of driving Hussein and his grandmother (along with Jihad and his mum) back to Gaza because both of them were discharged today! I say privilege because I have no other word for it. I remember when we were told he would most likely not live for the next 24 hours or survive surgery, and then he lived through both, and started to improve. What joy when we found out he was taken off the ECMO machine! Coby wrote in his previous blog that one of the doctors said Hussein was a miracle, and really it’s an incredible thing to go back and read his blogs below chronologically, to see the stages of his recovery. Hussein’s life is now a living testimony of God’s glory. We pray that he would grow up with an awareness that it is the Messiah who has preserved his life for a purpose. Psalm 116 comes to mind for the circumstances of Hussein’s life,

“For thou hast delivered my soul from death, mine eyes from tears, and my feet from falling.
I will walk before the Lord in the land of the living.”

When all looked as if the darkness was steadily overwhelming any chance of light, suddenly life burst through. Today he returned to Gaza as a healthy boy, we are so amazed at what God has done, and pray that he will continue to work through Hussein, maybe that even one day he could bring the good news to his community. Today I visited Hussein just before he left for the children’s surgical department. Dr Uri said again that it’s a miracle how he is doing. I thanked him for accepting him in the hospital although there was a great risk with his operation. But we believe our Lord can do more than we can think of and in that faith we continue to pray for his complete healing.

In the last EEG they saw there was a seizure when he had a convulsion last week. He is now on medication and there haven’t been any more convulsions. In a few days time they will do another EEG. Aunt is very happy too, and was already packing for his transfer.

He will probably spend another week in the hospital for observation. We thank our Messiah for His healing touch in Hussein’s life.
Hide Comments Show Comments
“But I will restore you to health and heal your wounds,’ declares the LORD.” Jeremiah 30:17 Last night Hussein had a convulsion. When I arrived in the hospital, they were doing an EEG on him, and later today they will also do a CT scan of his brain. Please let us pray that his brain is okay and there is no damage. His grandma looks so well after him. She is a sweet lady and loves to chat with us.
Today they started to feed him by bottle. He is taking 5 cc every three hours, and they plan to increase this gradually. Although there is still some concern about his brain and lungs, we are very thankful how he is recovering from a big operation. We believe that our Messiah can heal him completely.
Hide Comments Show Comments

Today when we arrived at Hussein’s room the nurses and the doctors inside were quite busy. Then we found out they just extubated him successfully! Praise God! Originally the act was set for yesterday, but since they found an infection in Hussein’s leg they waited one day longer. The boy’s grandma was in a very good mood today. She smiled a lot and taught us a little lesson in Arabic. Even Coby could invite the grandma to have a brief look at the beautiful and colourful windows of Chagall in Hadassah’s Hospital Synagogue. Coby and I visited Hussein at Hadassah Hospital this afternoon, and praise God we found that he’s come off the ECMO device which was supporting the work of his heart and lungs. (Only about half of all children who require ECMO in hospital can survive when it is removed.)

Hussein’s nurse Sophia then told us that they’ll try to wean him from mechanical ventilation tomorrow. “‘On the Sabbath?” I asked.

“In this department there is no Sabbath,” she replied. “When we can do something we do it.”

We talked a little bit about the Shevet Achim community, and she went on to say “you’re doing a mitzva” (a good deed, or literally fulfilling a commandment).

“No, you’re doing the mitzva” I replied.

“We’re doing it together” she decided. A very tiny body connected to multiple cables, big machines surrounding the bed and a powerful heart pumping visibly. This is the first visual I got, when I entered Hussein’s room. Looking at the visible and the statistics you could be discouraged, but as I looked at Hussein I didn’t see a fragile child, I saw a fighter. When Hussein arrived, the doctors weren’t sure he would made it through surgery and he surely wouldn’t be able to survive the following days; but Hussein did. This precious child fought hard to stay alive and so did God. Hussein‘s room isn’t filled with hopelessness instead I felt strength and hope. This child is a miracle, because he is alive. Our God is fighting against the disease in little Hussein’s body. Looking at Hussein I was reminded of lyrics from “Planetshakers – Glorious Collision”

“What a glorious collision when You came

And turned it around, death became life

Everything changed when You came into sight

The heartache was gone, the pain was undone

With just one touch of Your glorious love

You turned it around”

Hide Comments Show Comments
Yesterday we found out that Hussein’s condition was very serious, and that the doctor felt that he should have come a month earlier for this surgery. It has taken so long that Hussein is now in a critical condition, making the surgery today very high risk. So we and his grandma were glad today to hear that the surgery had been a success.
The next 48 hours are still critical and so we have to pray that God will continue to hold him as his body recovers from the major surgery from today.
Hide Comments Show Comments
Today Deborah and I walked into the pediatric cardiac ICU to find nurses in both rooms of the two new children from Gaza. Thankfully, one of the cardiologists was there also, and could explain what was going on. The prognosis for little Hussein is not positive, he has Total Anomalous Pulmonary Venous Return (TAPVR), and  is due to have surgery tomorrow morning. Hussein’s condition is dire, as he got here “one month too late.” They do not know if he will survive the surgery tomorrow morning. His sweet grandma had a meeting with a doctor and social worker to explain the situation, and she was very calm. The doctor drew a diagram as the social worker translated everything.
I don’t know if she accepted this, but she didn’t seem phased by the news. The last words of the meeting was that he’s in God’s hands. That’s where he has always been, and always will be. The doctor who met with us, said that although they are not sure of the outcome, they’re still going to do everything they can. They will still try their hardest to save his life. It was a moment where I was taken aback to see the resolve in this doctor’s eyes, to do everything he can to save the life of this little baby, and then add that this family is from Gaza and the staff of the hospital are Israelis. They are united in the cause of Hussein’s life.
Please, friends, let us not become weary of petitioning our Father for righteous causes, for the lives of these children’s. Please pray that Hussein would come out of the operating room, and everyone involved will see the glory of the lord. In closing, we declare these lyrics from a song called I Will Trust My Saviour Jesus, by CityAlight:
“I will trust my saviour Jesus
When my darkest doubts befall
Trust Him when to simply trust Him
Seems the hardest thing of all
Jesus, only Jesus
Help me trust You more and more
Jesus, only Jesus
May my heart be ever Yours.”
May Hussein’s heart be ever yours, and may we trust our Saviour Jesus when darkest doubts befall.
Hide Comments Show Comments 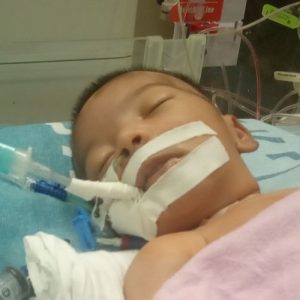 As of right now, Hussein still needs $6500 toward surgery and related expenses.