While it was cold and rainy outside, inside Hadassah Hospital Claudia and I had a heartwarming reunion with Lia and her grandmother today. I was very excited to see them again because they are just lovely people.  The last time they were in the hospital I really grew fond of them. They finally came back for a follow up after Lia’s surgery in October. Together with Lia also Soso and Adam came. It’s amazing how fast these little babies grow in one month. Lia is such a cute girl and her beautiful eyes with the long lashes make everyone’s heart melting. But she’s quite small since her family is poor and the grandma told me it is not that easy to get enough food and milk for the children. I sat and talked with the grandma and she asked me about each of the other volunteers of the Jerusalem guesthouse. She also enjoyed having the grandmother of Soso and the mother of Adam around. They were talking a lot, also with other parents they met in the hospital.
Lia slept in my arm and when she woke up again I could catch a incredibly sweet smile from her. Today I couldn’t find our cute Lia in her bed and also the lovely grandmother wasn’t in her room. Maybe they walked home to Gaza I joked in my mind. A little later, I met a very happy grandmother and even a beautiful smiling baby girl. One of the first things the grandma said to me was, “Maybe we are allowed to go home today!” And praise God, after waiting one hour it was also confirmed by the doctor that they could go home.

Then the gentle doctor carefully gave last instructions about the medicines and how to do the medical care at home in Gaza. The grandmother had to repeat everything. One of the nurses just explained to me: “Did you know that there is no medical care in Gaza as we have it here? This is why we have to explain care to them in every detail. They need to do everything by themself since they don’t get this support in Gaza. It is a huge responsibility…”

I knew about this situation in Gaza but I didn’t realize yet what it really means for the families and especially our little patients! Praise the Lord, that he goes with them to Gaza and he also keeps an eye on our little Lia even if there are rarely doctors who care for her! HE pulls the strings. Written by Margerita
Today in our visit to the Hadassah Hospital with Yosef, we found Lia’s grandma with a heart full of hope for the next step. Yosef talked to the doctors and they confirmed that little Lia was going to be moved to the pediatrician surgical department. Meanwhile I had the opportunity to hold Lia in my arms, and it looks like he is doing well as he now is smiling. It’s so gratifying to see how he is improving. We thank God for Lia’s life, for the people that pray for them and for all the financial support to Shevet Achim.
Hide Comments Show Comments

“The God who made the world and everything in it is the Lord of heaven and earth and does not live in temples built by human hands. And he is not served by human hands, as if he needed anything. Rather, he himself gives everyone life and breath and everything else” Acts 27:24-25. Lia’s heart is doing fine but there is some concern about her lung. One of her lungs collapsed a few days ago. The cause of the collapsed lung is probably due to the length of her intubation before surgery. They have to intubate her for one day to be able to do some suction to expand the lung. They waited a few days because sometimes it expand itself by rest. Although this is a disappointment, we pray that the treatment will be successful for the lungs.As the above verse says I believe that our Lord and Savior will give life and breath in Lia’s body.

Hide Comments Show Comments
Although her big operation was just yesterday, Lia was already extubated when I saw her this morning. Despite all the drains and IV medicines, I was very thankful to see her in such a good situation. The staff was very pleased about her process. They did a check Xray this morning and had no concerns there. Yesterday the doctors created a bigger right ventricle and placed pulmonary organic valves in her arterie. These valves will need to be renewed in the future. It’s such a relief when a child is doing well through the first twenty four hours after surgery since this is a critical time in which the body needs to be able to adapt to the new situation of the blood circulation.  Grandma is thankful and she wants confirmation that Lia is doing okay. It’s good to be with her and to be able to give her peace of mind. Thank you so much for all your prayers. We serve a wonderful Lord who is able to do more than we can imagine. To Him be all  the glory!
Hide Comments Show Comments

This morning I was surprised to find out that Lia would have her surgery today and not on Thursday as originally planned. So when I arrived at the hospital she was already in the operation. I met her grandmother and we had a nice talk. She told me it would be a long surgery, maybe about seven hours. But praise God, the lovely grandmother was really hopeful and in a very good mood all of the time! She even taught me a lesson in Arabic and showed me  her English skills.

In the operation the medical staff created a forth chamber in Lia’s heart since she had only three chambers until now. Due to the difficulty of this surgery it took a long time. This is why I was so happy to see our little Lia finally out of surgery and in a very good situation. Also it was very precious to see that the whole surgery team was in such a good mood after the operation! May God bless them for their good work:)

Thank you for all prayers for the surgery of our loved Lia and please keep praying, that Lia’s health status continues to improve]. We have a reason to be thankful and hopeful since all is in GOD’s hands:) This morning when I visited Lia, I was surprised to look into her big, wide open eyes! I had not seen her eyes before because they intubated her straight away when she arrived in the hospital over two weeks ago.  Due to a delay in her surgery however, Lia was extubated and continues stable, thank God. Hopefully she will remain extubated til her new operation day which will be this coming Thursday during the Israeli festival of Succot!
Meanwhile, Lia is being fed by a nasal-gastro tube. Sometimes she cries but there is no voice. This is so sad to see when a child has no strengh to cry out loud.  But while we have voices we can cry out to the Lord on behalf of this precious girl!  Please join us in prayer for continued stability for Lia and that Thursday’s surgery will be a success!
Hide Comments Show Comments There was a huge question mark in our minds when we arrived at Lia’s room today and found her inside. “That can’t be her, she is supposed to have a surgery right now!” we thought. But it really was our beloved Lia who laid in the bed. Our other child Soso (also from Gaza) was more urgent, so this girl got the surgery and Lia waits until next Thursday.

So please continue to pray for her. The baby girl is doing ok, she was sleeping all the time today and her arms and legs are a little swollen. But she seems to be stable.

One time we entered Lia’s room we found a women playing a happy drum and singing for the baby. Also the grandma took the chance to try the music instrument and really enjoyed it! “The little girl is so far away from her mother. Nobody sings for her in the hospital. So I do…” the woman, a music therapist, explained to us.

Yes, she is far away from her father and mother on earth, but her father in heaven is still close at her side! Praise God for his everlasting faithfulness 🙂

When I arrived in the hospital today Lia was already gone for her catheterization to explore the anatomy of her heart. Grandma was sitting outside her room talking to another Arabic mother. The waiting was difficult for grandma. She can’t speak English so we communicated via Google translate. At the moment Michelle is teaching us some basic Arabic, so I tried a few words with her. After almost six hours Leah was brought back to the ICU. The cath was successful without any complications. The doctor said as it looks now they will do a major surgery, the Glenn procedure, this coming Thursday, immediately after the Yom Kippur holiday. With this operation they will add the vein of the upper part of the body direct to the pulmonary artery and therefore bypass the heart. This to take away the big pressure on the right part of the heart.

Please pray that the operation will be successful and that the family in Gaza will receive God’s peace in this all. It’s very hard on the parents not to be able to be with their precious child at such a critical time. Lia was born with a serious heart defect, but it was only diagnosed when she was already four months old and her family brought her to the hospital in Gaza with severe cyanosis. Doctors there had to put her on mechanical ventilation, and contacted us to ask for an emergency transfer to Israel. Thank God, doctors at Hadassah Hospital in Jerusalem found a place for her in their hearts, and in their new cardiac critical care unit, and Lia was transferred there today by ICU ambulance, immediately after the Rosh HaShanah (New Year) holiday. 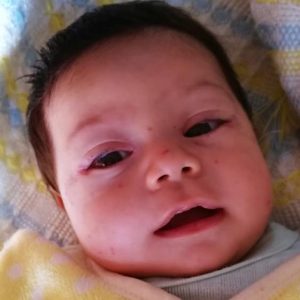 Lia is still waiting for a local leader to arrange prayer and financial support for her surgery.

As of right now, Lia still needs $8000 toward surgery and related expenses.