Word came today that Ezzedin could already safely return to his home in Gaza, after what doctors said were “great results” from his emergency heart catheterization. As Frank and I were driving to the hospital, Frank described the amazing view that he saw: the trees, hills, and helicopter tower. As he surveyed the beauty of the outskirts of Jerusalem, Frank later discussed how he was reminded of Psalm 125:1-2 which states, “Those who trust in the LORD are like Mount Zion, which cannot be moved, but abides forever. As the mountains surround Jerusalem, so the LORD surrounds his people, from this time forth and forevermore.”

We did not know the specific place and room, so we traveled around the hospital to find Ezzedin’s room. This was Frank’s first time at Hadassah Hospital. He shared with me how amazing and big the hospital appeared to him.

After a while, we found the department and room. The mom was stressed and afraid that the border will be closed. We told her that we will be on time and we assured her that if it is too late, then she could stay with us at Shevet.

The baby was so cute and small. As I carried him, he was sleeping in my hands.

The mom did not have phone signal, which did not help ease her fears. Frank offered some food and drink to her. When we traveled to the mountains, the soft and beautiful sun was about to set.

The mom was thankful for my help with carrying the baby and the baggage. For me, I was happy to meet the cousins from across the border. As an Israeli, we can only infrequently meet people from Gaza.

Here is a photo of Ezzedin, reunited with his father tonight back in Gaza: Sweet Ezzedin already had his cath this morning. They opened his pulmonary artery, so his blood now can flow unimpeded.When we entered room today, we found the beautiful tiny boy still sleeping peacefully from his anesthesia. We prayed for him and praised the Lord for his wonderful creation. The grandmother was having a videocall with her family and showed them the child. And also Claudia and I could say hi to the family. The doctor told us they will extubate him as soon as he wakes up. He only needs one more echo and if he recovers well, he can already return to Gaza in the next days. We thank the Lord that he made it possible for the hospital to help so quickly and save precious Ezzedin’s life. How great is our God! This evening we met a very friendly grandma as she arrived by ambulance with her cute tiny baby grandson Ezzedin in the Hadassah Hospital. The little patient is 12 days old and this is also how long he has been in hospital, kept alive by an infusion of a special medication to keep a small ductus open in his heart. As an emergency case he came from Gaza to Jerusalem, with his adorable grandma always carrying him at her side. It is just so touching to see this fragile creature of our great God, who brought the child so far.

Ezzedin is a dreamer. His tiny arms are stretching out, longing for something, catching the air. Occasionally a charming smile is running over his face. Moreover our baby is always moving and I wish I never had to stop watching it. He already came through his first echo in the new hospital and the doctors decided to do a catheterization in the next days to try to open up the severe pulmonary stenosis which is threatening his life. Please wrap our beloved tiny Ezzedin in your soft prayers for this is the comfort he needs! 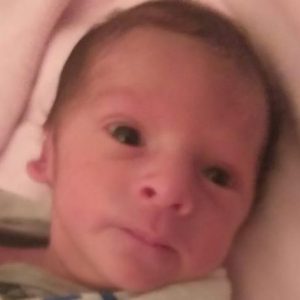 Ezzedin is a 12 day old child from an Arab family from the Gaza Strip diagnosed with pulmonary stenosis.

Ezzedin does not yet have a local leader to advocate for prayer and financial support for his surgery in Israel.

As of right now, Ezzedin still needs $5700 toward surgery and related expenses.