Today I met Iman for the first time and she is so lovely! She is a very smiley and happy girl even though she is going through a lot of sickness. At the moment, she is in the hospital with a respiratory infection. Her breathing sounds really noisy and she is coughing a lot. At one time Georgia, Iman’s mother and I, played a hiding game, which Iman found very funny. It was good to see her laughing so much. It was a really special opportunity for me to visit Iman because I got to see the amazing work God is doing through His people. Since our beautiful Iman had to be taken to the ER on Friday, we were able to visit her today in the Sheba Medical Center. For this visit I was accompanied by two new Danish volunteers. It was their first time in Sheba and first time meeting Iman. Emma described her impression this way:

“Today we visited Iman. It was very special, because she has a virus, so we had to put on some blue suits, to protect us. It was also special to see a little child lying in a hospital bed, but even though she was sick, she had a lot of enegy, it was really great to see.”

Beautiful Iman couldn’t stop smiling and was very happy about the Danish visitors. Her face was lit up the whole time we were in the room even though we were dressed in that weird way. She laughed and moved around joyfully.

Her mum was also very happy about the visitors. She smiled at them happily and tried to have a small conversation. I was very impressed by Iman‘s Mum. She was still optimistic and happy even though she had to be in the hospital with Iman, whose virus prevents the doctors from moving forward with any procedure. So please pray for a fast recovery for Iman and for strength and patience for her mum. Our beautiful Iman has had a cough for three days as of this Friday. Also concerning was how high her heart rate was. Normally she is 140, but it was 170. So Shevet head nurse Colin and I took Iman along with another little one at Shevet from Kurdistan, named Asmaa, who was also presenting concerning symptoms to the emergency room.
The doctor said that she did have a virus, but didn’t understand why her heart was so fast. When the blood test they did came back it showed that there was evidence of a cardiac injury, so they decided to admit her to the cardiac ICU. Throughout the day it was really sad because Iman who was not well to begin with was further agitated by all the tests she had to undergo, but her mom was a superstar on calming her down and helping the doctors get an accurate reading of her daughter’s heart rate. It was a very long day for them, but God’s grace was in the midst of us.
At 6:30, I went up to the cardiac ICU where we normally work to see if there was food that Asmaa (another little one) and Iman could eat, and the nurse gave me two plates of food along with many other things like bread, hummus, and cookies. At around 10 p.m., Iman’s room was ready and we left her and her mother to sleep. Please pray for God’s protection over Iman, He knows her heart and every cell in her body.
Hide Comments Show Comments Little Iman is hungry for lunch on a bright and sunny (early) spring day at our Shevet home on the Jaffa seacoast.  She is waiting for her surgery. Mom is waiting too. God bless them and give them patience. Last night was pretty hard for our little baby Iman (the family’s preferred name for Roster). Her breathing was very fast, heard even without the stethoscope. Iman‘s mum was very worried so we decided to take Iman in the ER this morning.

I was a little bit nervous about going to the ER because it usually takes a long time and the language is sometimes a big problem. But not this time. Praise be to our caring God, He provided an Arabic-speaking doctor! From that moment on, I just knew again that God is taking care of every situation. After we took an Echo and an X-Ray, we waited a bit for the results. In that time, Iman’s mum showed me some pictures of her husband and children, which were very nice to see. Iman was crying and probably in pain, but Magaritha kept her distracted from time to time.

Eventually, the doctor told us that Iman has a Virus which causes coughing and pain, but they can treat it with medicine which they gave her right away. Iman‘s mum was very relieved. Suddenly she was very happy and wanted to see one of the other mums who needed to stay in the hospital. While she was visiting,  I was able to spend some quality time with Iman. After singing for her and walking around with her in my arms, she fell asleep. She looked so beautiful and peaceful! Her mum told me later that Iman didn’t fall asleep easily and was glad that she could finally rest. After such an exhausting night and day, Mum and Iman were able to go back to the Shevet base again. On Sunday, Iman will see doctor Katz and they will discuss Iman’s treatment. Please pray that her virus will be gone by then. Also pray for wisdom for the doctors as the decide on how to go on with Iman. Thank you! Roster has so much character. On the way to the hospital this morning, she spent the journey waving out the window at the other cars. I was really struck by how expressive she is. She manages to tell you so much in her face, and her little mannerisms.

Eventually, after a long wait, Roster was called in for her first assessment. Almost immediately she exploded into a storm of tears. Together Julio, the nurses, her mother and I tried everything – “baby shark”, bubbles, a lullaby, walking round the room with her, making faces, complete silence – eventually she started to calm down and her beautiful smile returned. Everyone in the room breathed a huge sigh of relief as everything went quiet. We had another long wait together after Roster’s assessment. This time, Roster and I explored the waiting room. She is really inquisitive and enjoyed looking at the playground, the pictures on the wall and, of course, Joela blowing kisses. Two other Shevet families were waiting at the same time. It was really nice to have our little community in the waiting room, talking and sharing fruit together.

We were told tonight, that Roster will probably need a surgery, but the medical team need to discuss tomorrow to confirm if she is suitable for this. Please pray that she will have the treatment she needs, and God will be with this special family during their time here. Today beautiful Roster stepped into our life. This nine month old girl stole my heart the second I saw her. Right from the start a lovely smile was on her face. Even though she didn’t new me she seemed to trust me. This lovely trade is also clearly visible in her wonderful mom. After the long travel she was very exhausted but expressed her thankfulness to be here. From the start I realized that Roster and her mum are connected in a very special and beautiful way. Roster was calm and seemed to feel safe as long as her mum was with her. She even let me carry her all the way to the car, her eyes constantly resting on her mum. As we arrived at the car Roster allowed us to be put in the seat without any fear. She even gifted us with a beautiful smile and started scanning her surroundings curiously.

We are very blessed to have these two beautiful people in Shevet now. Eight-month-old Roster still only weighs a little over three kilograms (seven pounds) due to her heart defect. And since she and her family are refugees from Syria living in a camp, she is especially vulnerable to chest infections during the coming winter weather which could take her life. Doctors in Israel have agreed to accept Roster, and the Interior Ministry has approved her visa. But the father has spent weeks going from office to office in Kurdistan seeking permission to leave the region and return, and has yet to find a sympathetic ear.

Please pray with us for the spirit of the Lord to move and open a way for Roster and her family to be treated for what the word of God says they are: made in the image of God himself. 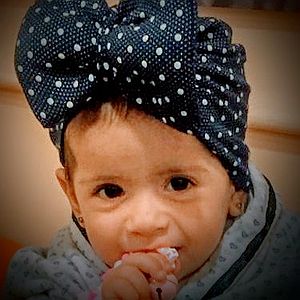 Iman (aka Roster) is a eight month old child from a Kurdish Syrian refugee family diagnosed with a hole between the ventricles of her heart.

Roster does not yet have a local leader to organize prayer and financial support for her surgery in Israel.

As of right now, Iman (aka Roster) still needs $9950 toward surgery and related expenses.