What a joy it was to have Ahmed’s mother and little Ahmed humming around our communities for a time. It didn’t seem to matter where this little boy was, the Shevet house, the Guest House, the hospital, even the airport – there was always something akin to a magnetic field hovering about him that made people irresistibly drawn. His face glowed from the inside out with a light that made him incredibly endearing, his energy contagious! The Shevet family will miss Ahmed. May God keep him strong until the time he can return for his corrective surgery. The Doctors would like between six and twelve months added to his little frame before attempting this however. So the Lord watch over you Ahmed, and protect your precious heart for His sake. The cardiologists and surgeons discussed Ahmed’s case this morning, and the surgeon requested that Ahmed return to Kurdistan for roughly six months prior to his next big operation. They would like Ahmed to grow more, and would like to reduce the risks of complications from a big surgery. Though there are always risks for major operations such as the one they are proposing for Ahmed, they want what is best for Ahmed and would prefer to wait until he grows a little more. The cardiologist was very pleased from his results from his catheterization in Israel, as they were able to dilate his stent and slightly improve his oxygenation. I know that God brought him to Israel for a reason, and it was important for him to have had this catheterization. I do not fully understand all the details regarding Ahmed, but I trust that God does. We are saying farewell for now, but we pray that Ahmed will grow strong and well during this waiting period. We also look forward to his return soon. These are some lovely photos of Ahmed that our colleague Jana captured. We treasure his smile and how he finds joy in little moments, such as marveling at the sight of bubbles. We will dearly miss his smile and his sweet mother.
Hide Comments Show Comments Two weeks ago, Ahmed underwent a cardiac catheterization where they were able to widen a stent that had been placed in his heart one year ago. Today he had a cardiac assessment, to make sure his heart was functioning well. The echo revealed that this intervention was successful. The cardiologists would like to present his case, regarding when would be the best time for a surgical intervention. Please pray for his mother during this waiting period, and for the doctors to make a wise and informed decision about whether it is better to perform the surgery now or safer in the future after some growth. Prior to our departure to the hospital, I prayed that Ahmed would be calm during his exams. Ahmed is so full of life, he loves movement. At the hospital he was playing and flipping through the pages of a book that he found. He is often smiling and laughing, except once he sees the medical equipment, he often cries.

At the start of his assessment, he was inconsolable. However, after his mother sat on the examination table, cradling Ahmed in her arms, he was able to fall asleep to gentle rocking and a soft children’s lullaby, playing from a phone. At times he would almost wake up to various changes or noises, but he slept through most of the exam. This was an answer to prayer. He looked so sweet while sleeping. As his sweet mother was cradling Ahmed, it reminded me of Christ’s unconditional love, and how God is watching over Ahmed and protecting him. God is overjoyed and loves Ahmed. Ahmed is full of life. He never stops moving and never stops exploring. Simply sitting in the stroller or in his designated bed in the cardiac unit was not sufficient for his abundant energy. Today he was very active, which was a good sign. Yesterday, the x-ray revealed that he had fluid in his lungs. The doctors started a medication to help decrease this fluid, and today the x-ray showed that he was responsive to this treatment. After a blood test, Ahmed was cleared to return to the Shevet Achim house in Jaffa. Ahmed’s mother was thankful and excited for this news, especially for the improvement of her son. During the waiting for the report, Ahmed and his mother, ventured to the various markets located in the hospital. He loved seeing all the various colors, items, and exploring the various parts of the hospital.

At last he finally waved goodbye to the hospital. Ahmed is now reunited with the other families at the Jaffa Center. May we all continue to keep finding joy in the little beauties of life, to live fully, and to respond to all circumstances with thanks. What does it mean to be full of life? And are we all living our lives to the fullest? We give thanks to our God, the giver of life.

After arriving at the hospital, I found out that Ahmed was in the General Ward. Upon arriving there, I found his beautiful mum and a sleeping Ahmed. Both of them were gaining strength for the procedure which had been delayed. Talking to the nurse I was informed that he would be the next in line for a catheterization. It still took a while before he finally went into the Cath lab, but God provided the space for him.

Ahmed’s mum was quite scared at the beginning but through co-worker Helen’s support, she felt better and took the rest of the wait strongly. Ahmed’s procedure went by quickly. He was put back into the 2ICU with a very happy mum. Waking up, Ahmed was surrounded by his loving mum, some other Shevet family members and me. The room was filled with joy and love, a great atmosphere.

I feel very blessed knowing them and the love they share with each other and us. We were sitting together and laughing. In the midst of these hard circumstances, they were able to have a small piece of normalcy and joy. This was such a beautiful gift to the families and to me. I felt like God was blessing this time with His love and joy. Ahmed came to Shevet Achim last year and had a stent placed via a catheterisation procedure. He has grown really well in the past year and now it’s too small for him. He has a condition called “ventricular inversion” and needs surgery to increase his blood flow by diverting it from the atrium. His surgery will hopefully involve making a conduit from the right ventricle to the pulmonary artery, and closing the VSD (Ventricular Septal Defect). This morning he had an echo ahead of his catheterisation tomorrow. This procedure will allow his doctors to evaluate the pulmonary artery and plan the surgery. They might also be able to dilate the stent to improve his blood flow while he waits for surgery.

Ahmed was in a great mood as we drove to the hospital this morning. He’s learnt how to make sheep noises from Alena, one of our volunteers, so he spent the journey happily bleeting at the top of his voice; the rest of us couldn’t stop laughing.

Once we’d arrived, the long wait for Ahmed’s echo began. He had so much energy, running all over the waiting area as I tried to keep up. At one point, a lady arrived with a noise machine and some bubbles. You should have seen Ahmed’s face when he saw them; his eyes were wide with curiosity and joy, especially when he realized he could “pop” them.

While we were playing, Jihad, the father of another Kurdish child named Israa, arrived. I was really touched to see that while his own daughter was in surgery, he wanted to spend time with Ahmed and his mother. It was obvious that little Ahmed absolutely adored “Uncle Jihad”, breaking out into the biggest smile when he saw him. Finally, Ahmad was called in for his echo. Almost immediately he became really distressed and restless, refusing to sit still and crying uncontrollably. Eventually his mother asked for Jihad and he came running in. It was really beautiful to see the way Ahmad changed when Jihad came in. He didn’t leave his side the whole time, talking to him quietly and holding him still. I see God’s heart so clearly in this; he delights in using us in his plans, and today he used Jihad in his plan for Ahmad.

This afternoon after the echo, Ahmad was admitted. Please pray that the catheterisation goes well tomorrow and that God would continue to have his hand on every detail of Ahmad’s life. Give thanks for the beautiful way God orchestrated everything today. Ahmed landed safely tonight at Ben Gurion airport for an urgent follow-up to his first surgery in Israel last year. When he was just two months old, Ahmed traveled to Israel with Shevet Achim to have a patent ductus arteriosus stent placed. Ahmed possesses large, innocent deep brown eyes. He is one year and four months old. Ahmed also has a contagious smile. He smiles at almost everything–a yellow balloon, a Kurdish song about the days of the week, and even the other children. He is such a joy to be around. I wish we could capture his sweetness. His mother, Garda, also is incredibly kind and sweet. We are all looking forward to spending more time with them.

We are incredibly thankful for Ahmed’s safe return. We pray that Ahmed and his mother would have a wonderful, blessed second journey in Israel. 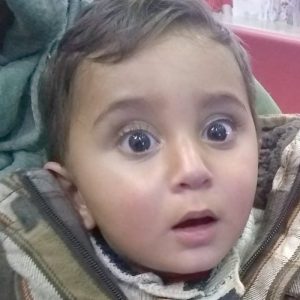 Ahmed’s second surgery is a one year old child from a Kurdish family in northern Iraq diagnosed with ventricular septal defect and pulmonary atresia.

Ahmed does not yet have a local leader to advocate for his prayer and financial support.