Little Ahmad had his third surgery today. It is the third attempt to help his heart function well, as after the previous two surgeries, still the oxygenated blood hasn’t been traveling well around the body.

The auntie waited happily during the many hours of surgery. I think she is feeling very hopeful that this time will be the last of the surgeries, and we will be seeing progress with his healing. She has many of her own children at home in Gaza, whom she misses during this time, but she remains faithfully beside Ahmad.

Thank God that the report from the doctor after surgery is so far good. Please pray that this surgery will be a success, and Ahmad will recover and be able to return to his family soon.
Hide Comments Show Comments

Even though I’ve been quite a lot to the hospital lately, I never had the possibility to meet Ahmed from Gaza. So today, when I saw him for the first time, I realized that his arms are not much bigger than my thumb. He is such a tiny little boy. It was lovely to meet his aunt, she was very happy to have us visiting him.
However, her mood changed quite quickly when she found out that her nephew will need a third surgery.I talked to his doctor to get a few updates and here is what he told me:

During the weekend they had tried to extubate him – without success. He was too weak. They performed some blood tests in order to find out if the little boy has some kind of virus. But the main issue is still that his BT shunt is too big. Most of the blood goes to the lungs and not to the organs and other parts of the body. They know for sure that he’ll need another surgery when he is stronger, however they have not yet decided what exactly they’re going to do as they have several options.

Please pray for strength for his aunt, so that she can get trough this difficult time together with Ahmed.

“I am the good shepherd; I know my own sheep, and they know me, just as my Father knows me and I know the Father. So I sacrifice my life for the sheep. I have other sheep, too, that are not in this sheepfold. I must bring them also. They will listen to my voice, and there will be one flock with one shepherd.” As I entered Ahmed’s hospital room, I was very happy to see him resting in his bed with his eyes open. I smiled at his cute little face and his auntie entered the room. Her face lit up as she came to greet me. Ahmed’s aunt has been by his side from the beginning, and she has given everything to keep him safe.

Only one day after his surgery, Ahmed is doing very well, but he is still intubated. Please pray. Ahmed finally had his procedure to decrease the size of his previous BT shunt. After days of waiting, he had his revision surgery this morning. His aunt has been so patient and understanding. She appeared at peace when I saw her today and was so relieved to hear that Ahmed’s surgery was successful. Her smile and her praise to God for Ahmed’s health is beautiful. We pray that her joy will continue and multiply.

Please continue to pray for Ahmed, as his body adjusts to these revisions. They will continually monitor Ahmed and see if he is responding well, and if they will be able to extubate him soon, perhaps tomorrow.

Hide Comments Show Comments
Sorry, we do not have any photos of Ahmed from today, but here is an update so you all know how to pray:
Ahmed’s aunt is often walking around the unit, and it is wonderful to see her. It is nice to see her smile and to greet her, even if it is for a short time. This morning, when I saw her walking around, she said that Ahmed would have a surgery soon.
We later confirmed this with the doctors, and they said that they just planned for him to have surgery tomorrow. This is to adjust his previous surgery, as they will decrease the size of the BT shunt that helps redirect blood to his lungs and to improve his oxygenation.
Please pray for his aunt, who is caring for Ahmed diligently. Please pray for peace for the family, as Ahmed undergoes his second surgery.
Hide Comments Show Comments Ahmed’s aunt and I fondly admired Ahmed’s little smile and beautiful eyes. They were planning on extubating him today, but we were waiting for him to be a little more alert prior to the procedure. While we were waiting, we held his little hand and he responded well by staring deep into our eyes. We could not but exclaim at how beautiful Ahmed is, and how thankful we were that he was able to finally have surgery.
A little later, they were able to extubate Ahmed. During this extubation they realized that there was an excessive amount of blood travelling to his lungs and almost re-intubated him, but they have started a medication and are hoping that his body will be able to adjust without surgical intervention.
Please pray for Ahmed’s family as they wait to see how Ahmed responds to these changes.
Hide Comments Show Comments Archie and I saw the joyful face of Ahmad’s auntie as we stepped out of the lift this morning.
Prayers had gone up on behalf of Ahmad, asking that God would open the way for him to have a surgery, as his condition deteriorated, waiting for a bed space in the intensive care unit. Praise God as today that door was opened, and Ahmad’s surgery went ahead.

His patient auntie was so happy. Her face was lit up with a beautiful smile, as she explained that he is just 20 days old, but they want to do a very big surgery for him. She has waited on behalf of her family for over a week for his surgery to happen. All were growing anxious. Archie showed her a photo of Ahmed which he had on his phone and we all agreed that he was a very handsome boy. Thankfully,  he is in the hands of God. After the surgery, we visited him, and the doctor told us that he is stable. He looked so small, with beautiful porcelain skin and so much black hair! Lord willing, he may be extubated tomorrow.
Thank God for the successful surgery, and please continue to pray for Ahmed”s healing.
Hide Comments Show Comments “He is so small!” These were the first words Ahmed’s smiling aunt said to me.  What can I say, she is correct. But Ahmed is not only small, he is also incredibly cute. His beautiful little eyes rested on me as I was visiting him, and I couldn’t stop staring at his beautifully made face. Even though he is just a few days old, he had an awake and curious look in his eyes. Such a beautifully created and uniquely loved baby.

Ahmed is still waiting on the doctors to decide what kind of surgery they will perform, and in the meantime, the loving staff and his auntie are always by his side.

On his second day of life, newborn Ahmed’s parents rushed him to the hospital in Gaza after noticing he was blue. He spent nearly the next month in the ICU, waiting for someone to help him get to advanced medical care in Israel.

We heard of Ahmed this week, and waited all week for space to open up in one of the hospitals which performs heart surgery. Finally our friends at the Sheba Medical Center made every possible effort and opened up a free ICU bed on Thursday afternoon, just as everything was closing for the weekend.

Yousef and Amar though kept pushing and arranged for Ahmed’s transfer on Friday morning. Moshe reports that he and Frank were at the hospital to meet him:

Ahmad came today, and while we stayed outside as the nurse organized his room, we met his aunt, who looked worried.  About hour later, we entered his room: Ahmad was there, lying peacefully, everything calm. Before Shabbat there are just a few people available in hospital, and  his room was peaceful and quiet. The nurse said he is stable hemodynamically, and he is not eating except for an IV. They hope his surgery will be on Sunday.

Please pray that God will bless his time in Israel and keep him healthy, and that he will grow to be happy child. 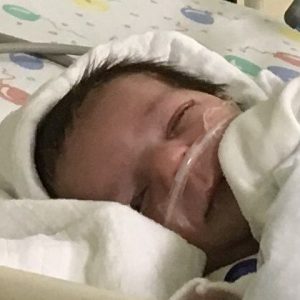 Ahmed from Gaza is a one month old child from an Arab family in the Gaza Strip diagnosed with Tetralogy of Fallot.

As of right now, Ahmed from Gaza still needs $9000 toward surgery and related expenses.