Mohammed is a particularly lovely baby. He is always so smiley and happy, and as we waited with his mother during the catheterisation, we loved looking at this sweet picture of him looking handsome in his hat before going into hospital yesterday. The doctor was pleased to tell us afterwards that on this occasion the catheterisation was successful in treating the stenosis in his valve, thus preventing him from needing an open heart surgery at this time. This is wonderful news, and his mum was very happy. Co-worker Alena and I left them together in the intensive care unit and hope that it won’t be too long until he can be discharged to return home.
Hide Comments Show Comments Mohammed, seen here above right in his mum’s arms, went to Sheba Medical Center today to be admitted. He will be having his second interventional catheterization tomorrow.

He was such a good and happy boy throughout the afternoon. Please pray for his catheterization process tomorrow. The last time the doctors tried the balloon dilation it had serious complications.  They will try again tomorrow with a larger balloon, and if this doesn’t work, they will have to go to surgery. Here is the happy little face of Mohammed before his blood test today. Whilst his amazing mum remained calm, he didn’t enjoy the blood test one bit, and it was really sad to see him crying.

The test will give his doctor more information about a medication he is receiving for the blood flow.
Hide Comments Show Comments Our handsome Mohammed had an echo today, which helped the doctors to decide that they would like to perform another catheterisation and try and improve his aortic valve stenosis. The doctor stressed how much better it is to do via cath if they can, at this stage. He is an especially lovely baby with a very beautiful smile.
Mohammed also had an ultrasound of his leg to check that everything was OK following his previous cath… He didn’t enjoy the ultrasound at all! Thankfully it only took a few minutes, and he could be bundled back up into his fluffy warm clothes. He needs to start on a medication to ensure his blood moves nicely around the body… It has to be given by an injection, twice a day. Colin is administering his first dosage of this as I write, and I’m sure this is a horrible surprise for him, so please pray for him!
His cath is likely to be scheduled for next week, and we are hoping for a successful dilation this time.
Hide Comments Show Comments Cute Mohammed has fought his way home and his discharge was surprisingly fast. I had just entered the ICU as the nurse approached me and gave me Mohammed’s discharge papers. Mohammed’s mum welcomed me with a smile and took joyfully her stuff and Mohammed to leave the ICU.

While waiting to leave the hospital, we were able to spend some time with another of the Shevet kids, also at the hospital. Here beside me and Mohammed, is the lovely Khonav! She was there for a CT scan. We arrived home to the Shevet house safe and sound. Pray little Mohammed and his mum can rest and regain strength for the time that is laying ahead. Today I had the opportunity to go to Sheba Medical Center where I met Mohammed and his mother. He had been moved to the secondary ICU and will probably be discharged to the Shevet home tomorrow. I loved to see the relief in the face of his mother that the cath finally is over, and she tried to show us that the curve on the machines he is wired to, says he is doing well. It was wonderful to feel the calmness that she expressed during our short visit, because if she is calm, I’m sure it effects Mohammed too, and makes his healing process shorter. Looking into his little smiling face with those beautiful, sparkling eyes just a couple of days ago, made me realize that he feels loved, and that helps a lot when you are going through the deep waters. Please keep praying for all the children, but don’t forget their families, because they really need it. I went to the hospital early this morning to meet Mohammed and his mother for the first time, and to be with them on catheterization day. When co-worker Anna and I arrived at the Sheba Medical hospital early this morning, Mohammed was just made ready to go to the catheterization lab. His mother followed him there and stayed while they were sedating him. When she finally came back, she told us it had taken some time for him to fall asleep. Then the three of us waited together. Since neither Anna nor I speak much Kurdish the conversation was sparse. But we used the words we could, showed each other some pictures and then just sat together in silence. Mohammed’s mom shed a few tears, but was very calm and patient.
Eventually the doctor came out and told us the examination was finished and Mohammed was doing well. The doctor called co-worker Julio to translate for the mother and explain things to her….
A little later we were let into the ICU to see Mohammed. He was still intubated and sleeping calmly. The nurse told us everything looked good, except that the circulation in his left leg was a bit low, so they were keeping an eye on that.

In the afternoon Mohammed started to wake up and move his arms and legs. He was then given some medication to ease his pain and make him relax. Through everything the mother stayed calm. I’m so thankful for the peace from the Lord that helps us to wait patiently for what He has promised. It will also help Mohammed and his mother through this time of waiting for his healing to be complete. Throughout the day, it was such a blessing to see Mohammed smile. We pray that Mohammed’s mother would have peace and joy in her heart, and to trust in God for Mohammed’s life. Today Mohammed S had his first Echo assessment. Mohammed’s mother has a very calm and quiet  personality, as well as Mohammed. The first day at the hospital for a new parent is a very decisive and important time. I try my best to explain to them where everything is and how things work at the hospital. It is a completely new experience for most of the parents, for some it is the first time they have ever been outside of their own countries. Mohammed´s mother was able to meet and spend special time with two of our Kurdish mothers who are also presently at the hospital with their children. Mohammed S was very calm during the Echo-cardiogram procedure. The Cardiologist confirmed the diagnosis of  Uni- cuspid Valve Stenosis. The Doctor said that maybe they can open the valve with a balloon procedure, but it could be dangerous and he said also that it is better to repair the valve or change it in surgery.They may have to replace the valve. The information will be shared with the rest of the doctors. Then they will decide and let us know. Please remember to pray for Mohammed S and his mother, their journey is just starting. Mohammed is a seven month old boy from Kurdistan. He was diagnosed with Uni-cuspid Aortic Valve, which means that his aortic valve was formed with only one leaflet of his valve rather than the standard three leaflets. His valve is very narrow and he will need intervention via catheterization or surgery. We are thankful that he was able to arrive safely, along with the other two families below. We welcome him and all of them to Israel. Mohammed has three sisters and two other brothers at home, eagerly waiting to hear more about Mohammed. The oldest sister is twelve years old. Please pray for all of Mohammed’s family, as they will be apart from Mohammed and his dear mother.
His cardiology appointment at the hospital is in six days from now, on the 3rd of March.
Hide Comments Show Comments 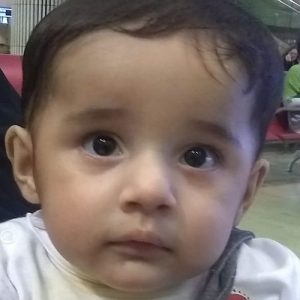 Mohammed S is a 7 month old child from a Kurdish family from Northern Iraq diagnosed with Unicuspid Aortic Valve.

As of right now, Mohammed S still needs $6000 toward surgery and related expenses.