Following his surgery on Monday, Ahmed is doing well and the doctors were hoping to extubate him today. He looked amazing today! With the blue tinge to his skin gone, he looks like a completely different baby.

I love Ahmed’s Aunt and the huge heart she has for her nephew, and for the other Shevet children. Already friends with the rest of the Gaza families in the ICU, she eagerly asked about each of them in turn. After having stayed at our house in Jaffa, she also knows all the Kurdish families. Hearing two of them were in the hospital for echos, she immediately set off to go and see them. She’s becoming an Aunt to everyone!

Thank God that Ahmed and his Aunt are both doing so well. Today at Sheba Medical center, Ahmed’s auntie was beaming when she saw co-worker Yousef and I. She has much to be happy about as Ahmed is recovering well and will hopefully be extubated tomorrow.

It was so good to see her so joyful and also to hear how well Ahmed is doing.
Please continue to hold him in prayer, that his process will be a straightforward one.
Hide Comments Show Comments Today was the day of Ahmed’s surgery – a complex operation called the Nakaidoh procedure. As coworker Georgia and I arrived at the little waiting room early this morning, his aunt was very glad to see us. Having stayed at our Jaffa house for the past couple of weeks, she’s already got to know us a bit and was soon chatting away. The hours of waiting seemed to fly by as we talked about everything from her family to the kind of birds they have in Gaza.

After about six hours in the operating room, we finally heard the news that the surgery had gone well. Ahmed’s Aunt was over the moon. She just couldn’t contain her enormous smile as she eagerly shared the news with Georgia and me, before proceeding to phone all her relatives. We are so thankful to God that the surgery was good and for the time we got to spend with Ahmed’s wonderful aunt. Please keep praying for him as the medical team work to keep him stable over the next few days.

For Ahmed’s aunt, this day was one of many emotions. This weekend was really hard as she was  waiting with us in Jaffa, rather than home with her family for the celebration of the end of Ramadan. But this morning, we got the news that we could bring him for surgery!

This was an answer to prayer as his aunt was really struggling, and with the many post-corona appointments to be scheduled, we didn’t know if his surgery could in fact be this week. The day was long one for both of them. Colin and I took turns switching off holding Ahmed, rocking him to sleep, and giving him his bottle. He spent most of the day in and out of sleep. After many hours waiting for a room, it was ready a little after 17:00. During this time they had to put in his IV cannula, which was really difficult for his aunt to watch. Afterwards, the nurse encouraged her to hold him and through tears she wrapped him up in his blanket and gave him his bottle, as he settled into her familiar arms and was close to sleep again.

Ahmed’s surgery tomorrow will be complicated as it isn’t so straightforward. Because of his multiple heart defects he will have the Nikaidoh procedure to correct the transposition of his great arteries. Please pray for this operation and for the surgical team as they work for Ahmed’s life. May God’s will be done in his life and his auntie’s.

Precious Ahmed is making himself at home at our Jaffa base. Rather than sending him back to quarantine in Gaza, doctors at Sheba have determined that they can perform his life-saving heart surgery a week from today, God willing, and have asked us to care for him until then. Ahmed came to the hospital today for an echo and assessment of his condition since being discharged after his emergency catheterization. The doctor saw him in the waiting area and exclaimed how good he looks. He is definitely putting on weight and growing nicely. After the appointment, the doctor was also sure to praise his aunty for her diligent care of Ahmed during this time.

Because of Ahmed’s growth, doctors are considering whether they can immediately take him into surgery or catheterisation for the next stage of his treatment. Families returning to Gaza must enter into a three week quarantine, and so this may influence their decision about when the next steps of his treatment can go ahead.

Please pray for his lovely aunty as she is missing her family, and for wisdom for the doctors to make the right decisions about the next steps of intervention for little Ahmed. Two-month old Ahmed first came to Sheba Medical Center from Gaza as an urgent baby. He had a condition called TGA and had a catheterisation at Sheba to keep him alive.

After he was stabilized doctors sent Ahmed back to Gaza three weeks ago to wait for his surgery. Because of fears of the coronavirus in Gaza,  Ahmad and his Aunt had to stay in a quarantine hotel until returning today to Israel. His aunt describes this as “more than difficult.”

Ahmed will stay with us in Jaffa until Wednesday, when he has an echo at Sheba and the doctors will decide if he is ready for surgery.

Ahmad has one brother and one sister back home in Gaza. The family was worried that their child couldn’t come here because everything was so hard, but thank God – He made a way! We collected baby Ahmed and his Aunty from the hospital today to take them back home to Gaza. He has a very complex heart condition, and this stay in hospital involved the first of many interventions which the doctors will need to try to fix his heart.

The Aunty explained that they have been there a week and it is going to be very nice for Ahmed to return to his parents, brother and sister at home. He has been sent home after the catheterisation, and will need follow up again in about a month’s time, and by this time perhaps he will be ready for surgery.
Please pray that he continues to be well at home and that we will be able to see him again in a month’s time.
Hide Comments Show Comments My colleague Amar asked me with some urgency this morning, please, can I contact the hospital to find out what’s happening with Ahmed. Amar, who coordinates all of our families coming from Gaza, explained that he has had phone calls from the concerned and loving family of Ahmed wanting to know how their precious baby is. As the aunty who is with him is unable to contact the family back home, it must heighten the ‘into the unknown’ feeling of faith mixed with fear, which the family have; almost blindly sending newborn Ahmed into Israel with the hopes to save his life.

Thankfully, we were able to tell the family that on Friday, the day after his admission, Ahmed had a procedure via catheterisation, which created a hole in between the two atria, allowing more  oxygenated blood to flow around the body.

The hospital staff have seen a good outcome, even thinking that it’s likely that he can be discharged back home in a few days. This is good to hear. Hopefully he will recover and grow well, and return in the future for a surgery. We know that it is all in the hands of God. He knows the best plans  and timings. We are thankful that so far the outcome has been good for this little one. Ahmed was born with transposition of the great arteries, a congenital heart defect which must be repaired within the first two months of life in order to allow a child to live, grow and have a normal life. But he was also born into the height of the coronavirus lockdown, which threw into doubt whether he’d be able to leave Gaza in time for the life-saving surgery which is available across the border in Israel.

Thank God, our partners at the Sheba Medical Center cared about this little one, even though they are under great strain as the main center for managing the coronavirus in Israel. They’re doing everything possible to keep the virus out of the children’s hospital, so asked for Ahmed and his aunt to undergo corona tests both in Gaza and also immediately on arrival at Sheba last night. In both cases the results were negative, and Ahmed was admitted early this morning to the children’s hospital where he is now in isolation awaiting his surgery. 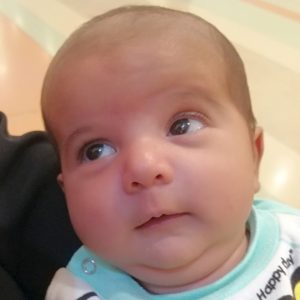 Newborn Ahmed from Gaza is a two month old child from an Arab family in the Gaza Strip diagnosed with transposition of the great arteries.

Ahmed does not yet have a local leader who will advocate for prayer and financial support for his surgery.

As of right now, Newborn Ahmed from Gaza still needs $6500 toward surgery and related expenses.