Sweet little Mohaned had his first physiotherapy session today. The therapist started to teach his grandma how to carry out a few exercises which his family will need to learn how to do for the rest of his life.
It was quite difficult in the beginning, and also Mohaned was very upset with the equipment over his face, and the pressure on his chest. Still, he and his grandma must persevere! We will continue to attend the therapy sessions next week.
Hide Comments Show Comments Little Mohaned is resting peacefully in the photo above. I thank God for arranging these physiotherapy appointments, as with previous children, it has been extremely difficult to be able to organise anything without the kind help from the receptionist of the cardiology department. But in this instance, God has opened the door with ease to be able to come every other day, without any appointment, at a time which is convenient for us. It is a huge blessing! Praise God for his favour with Mohaned.
The physiotherapist was very kind to explain that the purpose of today’s appointment is to carry out some assessments to see which type of therapy Mohaned will require. With his diagnosis of PCD, it has been determined that he does not have functioning cilia which should move mucus from the airways. Therapy will help him. He will need therapy for his whole life, but it is very possible for the family to carry it out once they know how.
Baby Mohaned is already receiving inhalations at home every day, and of course having a mask placed onto his face does not get any easier, so the session today was very upsetting for him. It required the use of a machine with a mask, and pressure onto his chest, so it was quite a distressing time.
The therapist quickly decided on a good plan for Mohaned, and he will order a piece of equipment to use in the coming sessions.
We will be going many times a week, and so please pray for strength for his beautiful kind grandma.
Hide Comments Show Comments It has been a long day for this tiny baby and his beautiful grandma at the hospital today, but a very fruitful time.

We found out some nice news: he is gaining weight nicely, and is now 3.7kg!
He saw the pulmonary doctor who took the time to explain his new genetic diagnosis of Primary Ciliary Dyskenesia in detail. The outcome is predominantly that he needs to start chest physiotherapy, and thank God that the doctor was so kind to put us into contact with the physiotherapist straight away, who in turn  kindly opened his schedule for Mohaned to visit him on any day. His echo was also very good, and he will continue to stay with us for some more time to train the Grandma in how to give his chest physio, as he waits for his next surgery.
Hide Comments Show Comments Before we went to his blood test today, Mohaned’s grandma told me he’s had many blood tests before when he was hospitalized. And like today, it was also challenging to draw blood from his tiny veins. After trying to vary places in his hand, they were successful with drawing blood from his forearm.
As we waited for the results, Mohaned was content to rest in his stroller or in my arms. Thankfully his blood results were good and the doctor also said that he was looking better. Thank God for this wonderful news!
Hide Comments Show Comments Today, Mohaned had an echo and a respiratory checkup. The echo was good and as they expected. However, the doctors have discovered a new genetic condition for Mohaned that makes him susceptible to many different respiratory illnesses throughout his life. Because of this, they think that he will need respiratory therapy for most of his life, as well as antibiotics.

Even though this is difficult news to receive we know that we serve a God who is able to heal and restore these earthly bodies. He created us and knows us all from each hair to each vein. So we pray for the Lord to give Mohaned’s body strength and to respond well to this therapy. We praise God that Mohaned will be able to continue to stay with us here in Jaffa while the doctors work out this new plan for him. Please pray for wisdom and understanding in how to walk forward and for the Lord to continue to provide for all his needs. Mohaned knows who is watching over him: We welcomed Mohaned and his grandma to our home in Jaffa today! It was especially sweet as Maryam, one of our Kurdish children, was also discharged today. Both Mohaned’s grandmum and Maryam’s mum have been sharing a room at hospital for some time now, and are very good friends. Due to all the gifts given in the hospital during Ramadan, this pair brought with them the most bags I have ever seen! It was so funny trying to squeeze everything into our van; we laughed together a lot!

Due to the corona virus, there are some restrictions about families coming in and out of Gaza, except for emergencies. Mohaned will need a follow up echo in 1 week, and so it is better for him to stay with us for this time, which us a great joy for us. Please pray that they will feel welcome and settled during these days.
Hide Comments Show Comments Beautiful Mohaned underwent a bronchoscopy yesterday to try to open his right lung. They weren’t entirely successful, but his function has improved.
His lovely grandmother and I sat and talked at Sheba hospital today. I really love her. She said, “Mohaned is inside my heart!”
Please pray that he continues to grow stronger and to continue to improve. And please bless his beautiful grandmother who is one of the kindest women I’ve ever met.
Hide Comments Show Comments Mohaned’s last heart echo showed that the heart function was well. The concern now is that as one of his lungs collapsed, he has been requiring oxygen support intermittently. He is also still not feeding well, which is important for him as he is now one-month-old, but still incredibly small.
When the doctors see that Mohaned’s respiratory status is stable, then they will hopefully be able to send him home to Gaza. His grandmother, who herself has nine children, was so gentle with Mohaned as she patted him to sleep. She has a beautiful heart of joy and gratitude. His grandmother later said, “thank you to all for bringing Mohaned to Israel for surgery.”
She also said something in Arabic like, “I love Mohaned. I love you because you love Mohaned.” The truth is that we are only able to love, because God loved us first!
Hide Comments Show Comments Mohaned is looking great, but some concern from his doctors today over a drop in his oxygen saturation. His heart is functioning well, so they’ll be checking out his lungs thoroughly before deciding that he is well enough to return to Gaza. Mohaned’s lovely grandma sends a kiss to all, and wants to thank everyone who has prayed for the baby. He is recovering nicely now, and feeding well.

Hopefully he will be able to return to Gaza next week! Who could this beautiful baby be, now breathing on his own and out of the ICU at Sheba? Compare these two pictures to the condition Mohaned was in two weeks ago–glory to God! I found Mohaned on the fifth floor today! This was my first time meeting them as before they’ve been in the ICU, and meeting them made me realize how much I’ve missed doing visits! His grandmother was a thoroughly beautiful woman. She has lived her whole life in the south of Gaza in the city of Rafah.
As we spoke Mohaned was very awake and alert, his big eyes were glued to his grandmother’s face and then to mine as I was a stranger to him, he looked like he was thinking ‘who is she?’ Mohaned continues to recover, today when I was there they had stopped supplementary oxygen to see how he was without it. He needs to be eating more, but this is complicated by his lungs collapsing after surgery which have been opened again, and little by little are improving, but nonetheless they are not normal yet so feeding alot at one time is a very laborious endeavour for him.  Please pray for this precious boy, thank God for this gift of life and the care of his grandma!
Hide Comments Show Comments It’s been just a week since Mohaned was rushed into surgery in desperate condition. Glory to God, here is the picture sent from his mother today! (We’ve not been able to visit him in the ICU ourselves due to coronavirus restrictions). Thank God, the dedicated team at the Sheba Medical Center prioritized Mohaned’s critical condition above all others and rushed him into surgery today to repair his heart defect. Tonight he is stable and on mechanical ventilation in the ICU. Mohaned came urgently Friday to Sheba. He is just two weeks old! He has three older sisters and one of them also has a heart problem. He’s spent most of his short life in an ICU in Gaza before being brought to the ICU at Sheba. He will first have a CT  to decide whether to take him into surgery or cath.
Thank God for bringing him safely to Sheba and for our Gaza team who work around the clock to bring urgent children out for medical treatment. Please pray for his precious life as he undergoes treatment here.
Hide Comments Show Comments Due to multiple heart defects Mohaned was blue immediately after his birth on April 13, and rushed to the neonatal ICU where an intravenous drip of prostaglandin kept him alive. His doctors contacted us for help getting him into Israel–his only chance to live.

Thank God, despite the coronavirus crisis the team at Sheba Medical Center went the extra mile, including coronavirus tests in both Gaza and on arrival in Israel, to make it possible for Mohaned to reach Sheba Friday evening as the Sabbath was starting: It is so good to see him in an advanced center with the resources to help him; Abraham and his seed were chosen for this reason, to be a blessing to all the families of the earth. 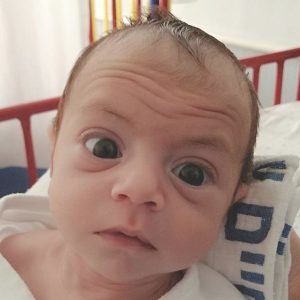 Mohaned is a two week old child from an Arab family in the Gaza Strip diagnosed with pulmonary atresia.

Mohaned does not yet have a local leader to advocate for prayer and financial support for his surgery.

As of right now, Mohaned still needs $4500 toward surgery and related expenses.