I was anxious to find out how Ziad was doing after the bad news yesterday. It was such a relief to hear that he has improved a lot and the doctors were even hoping to extubate him today.

Praise God for this change! Please pray for precious Ziad who was intended to have a cath today but his heart stopped.  He received resuscitation and was thereafter intubated for a second time.

I just think of his mom, and can only ask you to pray for his life.  Thank you Lord for preserving him. We ask you to do in his body what you are doing in all believers – making us whole, healing us, making us new. You are the God of the living, and we pray that you give life to Ziad.
Hide Comments Show Comments It was so good to see Ziad again today and the first thing I noticed was that he was extubated! They did the extubation two days ago, and since then he was been withdrawing also from the sedation. He has been diagnosed with Hirschsprung’s disease which affects his colon. He will need a surgery for this but first the doctors want to make sure his heart is completely well. And they will still do an interventional heart catheterization, hopefully at some point this week!

Ziad was moving around a lot today and responded when he heard his father on the phone, which are hopeful indicators for further improvement. Please keep praying for this beautiful boy and his wonderful mum. Today we got to go into the Children’s’ Cardiac Ward at Sheba Medical for the first time in months as the Corona restrictions are methodically relaxed, and to get to visit Ziad and his mum was very special.

He was supposed to have a catheterization today, but due to a recent fever it has been postponed. He was intubated still as he is unable to breathe on his own. The nurse said that his heart is working, but not well enough.

Seeing his mum was like seeing a dear sister. I was so happy to be with her again. She explained that he didn’t have a fever last night but in the days previously and that the cath he will have is supposed to be interventional.

Everyday she asks a nurse or doctor if he is better than the previous one. As she told me this, she was full of hope that each new day would bring for her son. She is very eager to see him recover but also committed to be by his side until he is fully well, no matter how long that road is.

Please continue to pray for these two, who are so dearly loved, especially for his upcoming catheterization.
Hide Comments Show Comments Ziad’s mother reports today that he has a fever and swollen abdomen, which his doctors are attempting to get under control. They’re planning on a heart catheterization tomorrow to try to understand why his condition is not improving, and also hoping still to wean him from mechanical ventilation. Ziad is still in the ICU and on mechanical ventilation, with doctors reducing his breathing support slowly in an attempt to wean him from the device. Ziad’s mother reports that he may also have a heart catheterization on Tuesday to explore the reasons for his slow recovery. These are the times that both child, family and doctors are all in need of our faithful prayer support. The report from Ziad’s mother is that he is struggling the day after his surgery, with complications including bleeding. Father, thank you for the care Ziad is receiving, both from your hand and through these doctors you have gifted to help him. The last thing we heard of Ziad’s condition was on Thursday, that he had a fever and therefore his surgery would not likely be today, Sunday. However, I found his mum diligently waiting in the area outside the operating room. She recognized me before I recognized her. She had a mask up to her eyes and was wearing clothes I had never seen her in before. She walked towards me and greeted me.
She said Ziad, was in fact, in surgery. He was taken in at 8:30 a.m. and came out at around 4:30 p.m.
Since Sheba Medical Center has restrictions, that there can only be myself and co-worker Georgia attending families at the hospital due to the ongoing precautions against the Corona virus and because today was a hectic day with a lot to do in it, I couldn’t spend the time I wanted to by Ziad’s mother’s side for the surgery.
Ziad requires substantial medical intervention in addition to his cardiac care, and requires some care toward his neurological problems as well, which his mum is very concerned about. When the surgeon came to say the surgery was finished and that he was really happy with the results, she asked if it would help him walk, but the surgeon answered no, this is sometimes a different problem apart from the heart.
One of the first things Ziad’s mother told me when we met nearly three weeks ago, was that she loves her son very much. I can’t fathom how deeply she must desire his whole person to be well. We can pray for this, that God will provide and make a way for Ziad to receive treatment in every area of need. We also thank God and rejoice in the victory of a very successful surgery. His mother asked that no post-operative picture of Ziad be taken, so we thought that a beautiful picture of  him will be perfect to look at and to help us remember to pray for this wonderful boy.
Hide Comments Show Comments

It was another full day of studies for Ziad today, as doctors learn everything they can about his condition before decided how to approach repair of his heart defect. Mom reports that he is still awaiting a head CT before a decision can be made. Today we found Ziad catching some zzzzs as he waited for his heart catheterization. Doctors at Sheba wish to study the anatomy of his heart more carefully in order to plan a course of surgery. It’s not an easy repair, and Ziad’s young mother expressed her gratitude for their acceptance at Sheba after two other hospitals turned her son away. Just under two years old, Ziad from Gaza came for an echo today. It showed DORV and pulmonary atresia, but because he is stable the original plan was to have him go back to Gaza and come in month for a CT scan and cath.

However Amar and Jonathan helped with having Ziad stay at the hospital for the CT scan and cath now because if he went back today they would have to stay in a hospital in Gaza, completely isolated for 28 days due to coronavirus quarantine.

In order to hospitalize Ziad today, this meant he would must pass a corona test today. The results were fast tracked, and all the staff was very helpful. In the end we waited six hours together for them, and though neither Georgia nor I expected the day to go like this, it was a really beautiful time. We were sitting together and talking. Initially when she arrived, Ziad’s mum was very apprehensive as Sheba was new to her. But over the hours, and this is perhaps one of my favorite things, she gradually warmed up to the circumstances and to us. Not just in spoken details about her life, but in her mannerisms, in her smile, and even by the end we understood eachother much better than at first though there was little change in how I spoke Arabic. But much of translation is dependent on relationship and certainly if one thing can bond people together it is sitting in a hospital eating dinner and praying the corona test results come back negative.

Ziad also got used to his surroundings and after about five hours of being together he started to smile. Georgia and I played peek a boo with him and found other ways to evoke his infectious laugh, like playing with our masks. It is a wonder to meet each child and see a little bit of how God has made them specifically. It was a blessing to enjoy one another for these hours.

At 8:45 we got the results: no corona! We brought them to the children’s ward and once they were settled we said goodbye (and goodnight). Half way to the car we realized we forgot something in her room, so I ran back to get the bag we had left behind. We hugged and she asked if we would be at the hospital tomorrow (I told her Georgia would be and that I would see her in two days) and we said goodbye again with much laughter and love.

So even though today was an unexpected journey, it was a really special day with a very special new family. Please pray for Ziad and his mother. He will be having a cath this week to assess his heart, and we trust in God that he holds his future. 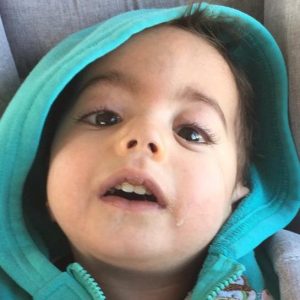 Ziad is a two year old child from an Arab family in the Gaza Strip diagnosed with pulmonary atresia.

Ziad does not yet have a local leader to advocate for prayer and financial support for his surgery.

As of right now, Ziad still needs $4500 toward surgery and related expenses.