Beautiful Jalal had a blood test today to check his electrolytes. Thank God it only took one try to find a vein for him, but during the test his mum found it very sad watching her boy cry. After he was thoroughly consoled in her arms, he eventually fell asleep.

The results were very good so he can stop a supplement he was taking. He has an echo next Tuesday and there too, God willing,  his progress continues as well! After a major surgical operation, Jalal was cleared to return to our Jaffa coastal home. He will still have a follow-up blood test and cardiology appointment in a week, but hopefully after that he is able to return to Gaza.

Please pray for Jalal as he continues to recover. Jalal and his mother enjoyed the beach near the Jaffa Center. Please also pray for their time here, that it can be peaceful and fruitful.

It was a joy to see Jalal this morning. Co-worker Julio and I went to the secondary ICU floor of Sheba Medical Center to visit another child and were happily surprised to see Jalal awake and breathing without any help!

His mum was glowing and peaceful as she sat with Jalal in her lap. She rose to greet us and took Jalal in her arms. He looked quite perplexed as to who we were but it was wonderful to meet this precious boy.

His hospital pajamas concealed his surgery scar. Knowing this, it’s hard to believe that this wide-eyed boy had a major heart surgery only four days ago. His recovery has been wonderful, thank you God for this gift! It looks like he has been extubated and removed from mechanical ventilation, one day after his surgery, which is good news.

Please pray for Jalal and his mother during this recovery time. Yesterday we went to the hospital for Jalal’s surgery which was postponed due to him having sepsis. Today he was able to go into surgery. When we arrived at the hospital, his mother Firad was in tears.

After a couple of hours, a doctor gave word that his heart is good and the surgery is almost done. Firad  seemed very happy and even smiled. A second doctor came out of the surgery smiling, said it went well, and he would be out shortly. After the good news twice given, the mother was talking and laughing.

Please keep Jalal and his mother in your prayers. That they will recognize and receive God’s love.
Hide Comments Show Comments

The doctors decided to discontinue a medication called Clexane, as they were able to find a pulse in his foot, meaning that the blood is flowing properly around his leg.
We had a good chat with his happy mum. She has had two other children with cardiac conditions; she feels familiar with being in a hospital setting. She explained to us that she recognised that Jalal had heart difficulties soon after he was born, as he was blue. Thank God that he has grown well and looks quite healthy despite his low oxygen saturation.
We were able to say goodbye to them, as the nurse came to transfer him to the regular Paediatric Ward.
Hide Comments Show Comments

Despite being in a hospital setting with strangers wearing masks around him, Jalal was still joyful and full of smiles. Jalal truly has a sweet nature. Even after multiple tests, he was still smiling.

Jalal is a sweet nine-month-old boy from Gaza. We praise God that he and his mother received permission to receive care in Israel. When we first met him at the border crossing, we recognized how blue he was due to his low oxygen saturation. Jalal has a complex congenital heart condition called Tricuspid Atresia. He has four other siblings, two of which also have congenital heart abnormalities.Tomorrow he will have a cardiac catheterization.


Please keep Jalal in your prayers, for any procedures he will undergo.
Hide Comments Show Comments 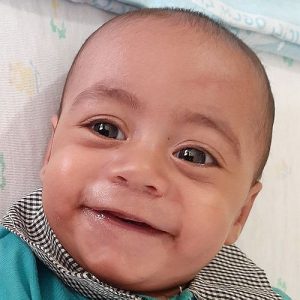 Jalal is a 9 month old child from Gaza diagnosed with Tricuspid Atresia.

Jalal does not yet have a local leader to advocate for prayer and financial support for his surgery.

As of right now, Jalal still needs $3700 toward surgery and related expenses.