After  little Toleen and her father returned from Gaza yesterday. The day started very early for them, as well as for co-worker Georgia and I. We went to the hospital at 7 am as some examinations for Toleen were on an early schedule.

The first thing they ordered for Toleen was an Echocardiogram. During the echo, brave Toleen was happy and smiled like a model even for the photo, while her father lovingly held her little hands to calm her down. Thank God there was nothing note-worthy in the echo. In three months we have to order another echo to make sure that everything is ok with her little heart. At the second examination, a blood test was done on Toleen, to check a small clotting problem that she had before. It was difficult for the doctors to find a good vein to take enough blood from this small one, resulting in several attempts until it finally worked. This was very exhausting for Toleen and she cried because she was tired and hungry. Fortunately, the nurses managed to get enough blood from the precious little girl on the third attempt. Despite the many tears that Toleen shed, she survived the examination.
Between the individual examinations that had to be carried out on Toleen, there was always a long waiting period, which the little mouse bridged by sleeping or eating peacefully to recover from the previous exhausting examinations. Last but not least, Toleen had to undergo a neurological examination, which she also passed bravely and successfully. Thank God everything was fine here as well. Coworker Julio successfully brought her and her father back to Gaza today. In three months time, the brave little Toleen has to come back and will be examined again. Praise the Lord that everything was fine today and pray that our precious Toleen will stay healthy and that the tests will be okay as well when she comes back in three months. Our co-worker Amar, an incoming Gaza children-coordinator, received a surprising call this morning: Toleen was ready for discharge!

Somewhat unbelieving, co-worker Erika and I headed to Sheba Medical Center to see if this was true— and to make sure that Toleen and her father were really and truly ready for discharge!

Sweet little Toleen was stable and unfazed, napping in her hospital crib. Her vital signs were good, she was eating well, and she had not had any seizures since the medication was begun.   Her father was a whirlwind of activity; receiving discharge medications and instructions; figuring out how to connect the stroller and infant carrier; packing and loading bags of necessary supplies; and confirming that the essential documents were in order.

Finally, we packed the van (full!) and placed our precious cargo snugly in an infant car seat for the hour-plus trip.  Both Erika and dad watched Toleen in the back seat as we drove to the Erez crossing during late-afternoon traffic.

A few anxious moments occurred in the van when we realized that Toleen actually did not have permission to enter Gaza (common when a critical newborn  requires ambulance transfer to Israel). We prayed, and in faith, kept driving.

At the border, all papers were checked— including an extra one that we had asked for last minute at the hospital, confirming Toleen’s dates of hospitalization.  In record time (less than 30 minutes), we were given permission to help load everything in a cart, and Toleen was wheeled by her papa into Gaza.

As you can see, Toleen gave us a little good-bye smile before she left!

Please pray with us that Toleen will do well in quarantine, soon be united with her mother and siblings, and be able to return to Israel for scheduled follow up in a few months. Toleen was awake this morning when we visited her at Sheba Medical Center; in fact, her father was trying to give her a bottle.  She has not had any further seizures, and she is off supplemental  oxygen.

Like most small babies who have gone through heart surgery at a few days of age, she isn’t yet quite sure how to coordinate sucking and swallowing. While visiting, I was able to hold and feed her a little bit, show papa some baby-holding and bottle-feeding techniques, and encourage him that both he and she will get better at this process!

It is quite apparent that Toleen’s papa has not done these baby-care activities before (which is perfectly normal in this culture).    It is even more obvious how much he adores his precious little daughter!  Tender and careful, a bit fearful that she will “break“ or that he will hurt her, slowly learning to diaper and feed. Little Toleen has beautiful brown eyes. Her father mentioned that they were just like Toleen’s mother’s eyes.

She is so adorable and sweet. Despite her looking well, she has been persevering through many challenges such as a stroke and seizures. Today she had an EEG exam to further investigate her brain function.

Please continue to pray for Toleen as she navigates the waters of these challenges. Toleen’s father was all smiles when I saw him outside Sheba hospital this morning. He told me that today, doctors would try to extubate Toleen. Sure enough, when I saw him again this afternoon, the nurses had just successfully removed her breathing tube. She is now only on supplementary oxygen support.
Praise God, she is off mechanical ventilation, just days after a major operation. With her big eyes wide open, this beautiful picture above is worth a thousand words.
Hide Comments Show Comments

I met Toleen’s father for the first time, unexpectedly, in the kitchen located outside the Intensive Care Unit of Sheba Medical Center. When he realized I was from the organization Shevet Achim, he was very welcoming and kind. He joyfully said that Toleen was doing well after going through a major operation yesterday. Little Toleen always seems to surprise us. The referral report out of Gaza shared a different diagnosis for her than what the doctors in Israel diagnosed. The doctors at Sheba Hospital determined Toleen had Coarctation of the Aorta rather than Whole Interruption of the Aorta. During surgery, the surgeons also discovered a blood clot in her aorta and took necessary steps to treat this. Please pray for Toleen’s recovery process and for the father’s joy to continue multiplying. Toleen had major surgery this afternoon to repair her Interrupted Aortic Arch.   The father, who accompanied his new daughter from Gaza to Sheba hospital just a few days ago,  was quiet and anxious as he waited for news.  He responded quietly and with reserve until we asked about his wife and two other children back in Gaza, then momentarily brightened as he spoke about them. This brief exchange was followed quickly by a timely phone call from  Toleen’s mother.

Finally in the early evening, we heard the beeping of machines and a crib being moved down the hallway. Toleen’s dad immediately jumped up and followed behind the team into the ICU.  The transporting OR staff graciously allowed this worried father to see his much-loved little girl, appearing tiny in the large crib and connected to many tubes, lines, and monitors. Ten minutes later, father emerged with tears in his eyes as he related the surgeons’ words, “it was a successful surgery!” His emotion was visible as he expressed his thankfulness, saying “if she would not have come here (to Sheba hospital in Israel), she would have died in Gaza.”

We agreed with him, and rejoiced in Toleen’s life. We left him to call family members and tell them the joyful news. Toleen is a dear, three-week-old baby from Gaza who came urgently to Sheba last night.

After an echo at the hospital, her diagnosis was confirmed as Interrupted Aortic Arch.  This is a condition in which the Aorta doesn’t form properly early in pregnancy. She will need a C.T. scan before surgery, which, God willing, will be next week.

Please pray for the road ahead of her. While unknown to us, God sees all roads. Please keep Toleen’s father, who is her travel guardian, in your prayers as he waits for his daughter’s treatment and also for her mom back in Gaza, who is away from her newborn baby. Newborn Toleen was rushed to the Sheba Medical Center this evening in an ICU ambulance and on mechanical ventilation. Doctors in the Gaza Strip diagnosed her with complex congenital heart defects which could only be treated in Israel. 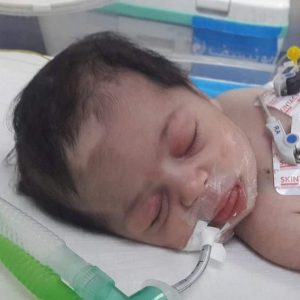 Toleen is a weeks old child from the Gaza Strip diagnosed with interrupted aortic arch.

Toleen does not yet have a local leader to advocate for prayer and financial support for her surgery.

As of right now, Toleen still needs $4500 toward surgery and related expenses.