We had the pleasureful company of both Kenan’s grandmother and Kenan staying with us in Jaffa for an extra week. Kenan’s grandmother is always so sweet, and would always greet us with a warm smile. She loves singing to Kenan. Her presence lights up the room. We’ve been able to share many laughs together.

Kenan has been steadily gaining weight and the cardiologist has cleared Kenan to return to Gaza for one month. His grandmother is very happy at the prospect of being reunited with her family.

I hope that Kenan will enjoy being held securely by his mother and family. Please pray for Kenan to continue to grow and to adjust to his heart surgery. We look forward to seeing Kenan again soon! One-month-old Kenan went for a follow-up echo and evaluation today at Sheba Medical Center. While the echo results were good, it did show that the installed shunt is a bit large for him; he needs to “grow into it!”

Kenan’s weight over the past week has increased only in very tiny increments, so the new plan is to help him gain by giving him more formula as well as by increasing the strength of that formula.  The cardiologist would like him to stay in Jaffa during this time, so he can be monitored for his breathing, to be weighed frequently, and to be near the hospital.

His grandmother was very disappointed that she and Kenan were not going back to Gaza today, but after another conversation with the doctor, she agreed that it is in his best interest to stay at least until his next evaluation in little over a week.

Please pray for Kenan to tolerate these increased feedings and to gain weight. Please also pray that his grandmother will be comforted and peaceful in the waiting.  She is such a conscientious and loving caregiver for this fragile infant; we pray that she also feels the love in our Shevet home, that this love and every perfect gift comes from the Father above. Baby Kenan had a blood test today at Sheba Medical Center with a positive outcome. His potassium levels were good and do not need further monitoring. Thank you for your prayers.
His grandmother enjoyed seeing the other mother’s at the hospital and they were eager to hear whether Kenan would return to Gaza in the near future.

This grandmother is a really fun, good-natured woman, which makes it a joy to have her around the Shevet house. There are two other children and their chaperones staying at the house now and Kenan’s grandmother is so warm and receptive to the other families. We are very happy to have them here with us and we thank God for Kenan’s health! Three-week-old Kenan from Gaza was discharged from Sheba Hospital yesterday (Friday), just before Shabbat. He had entered Israel by ambulance at a few days of age, with critical complex heart disease and very low oxygen levels.

After some discussion, it was decided that Kenan and his grandmother should come to our Jaffa house for some care and observation, as Gaza has had a recent uptick in CoronaVirus cases. The mandatory quarantine upon entry into Gaza is 21 days, and there are special “quarantine houses.” We weren’t sure that Kenan would get the necessary medical follow-up, and Sheba doctors also wanted him to return for follow- up soon. So, Kenan and his Grandmother —both seemingly exhausted— packed into the van (along with the usual bags, cartons, and stroller) for the trip. As we neared our seaside home and I told his grandmother “just two more minutes,” she suddenly sat up and saw the ocean. Her eyes sparkled and she kept exclaiming, “the sea, the sea!” Such a beautiful, joyful, peaceful demeanor as we pulled in.

Kenan and his grandmother have now settled in, warmly welcomed by the Shevet staff as well as the two other moms in the house. Everyone takes turns holding this cute and snuggly little guy…. he certainly is getting plenty of attention and TLC! It’s fun having a baby in the house, especially one whose oxygen levels are now an acceptable 78-82%. From his appearance, you would never know that Kenan’s list of medical diagnoses contain eight different problems!

Please pray with us for wisdom as we communicate with the doctors in Israel, the authorities in Gaza, and Kenan’s family about the best care for him in the next weeks and months. Kenan’s grandmother was so kind and welcoming, inviting me into the hospital room to see little one-week old Kenan. Kenan is so tiny and newborn as the photo above clearly indicates.

His grandmother is hopeful Kenan will receive surgery soon. Kenan should have a PDA stent placed in the next few days.

Let’s join his grandmother in hoping and praying in advance of his surgery. Kenan is not even one week old, but doctors in Gaza identified that he had Transportation of the Great Arteries. Shevet Achim arranged yesterday to have him taken by ambulance from Gaza to Sheba hospital.
Today he had a CT-Angio,  of which the doctors are waiting to see the results. Doctors also saw that his Mitral Valve is very small and that he also has a heart abnormality known as VSD.
He is chaperoned by his grandmother whom I met today. She was sitting with the other mother’s from Gaza in the ICU waiting room. If I didn’t know better, I would have thought she was old friends with the women she was sitting with, rather than having just met them last night. It was really encouraging to see our other Gaza moms welcoming her.
Hide Comments Show Comments Kenan was born five days ago in the Gaza Strip, turned blue at birth, and was diagnosed to have only a single ventricle of the heart in place of the normal two. He was rushed into the ICU in Gaza City where emergency medication could keep him alive until he could have surgery.

At the same time the first community outbreak of coronavirus brought the Gaza Strip to a standstill, with residents forbidden to leave their homes. Although a hospital in East Jerusalem was prepared to accept Kenan, the authorities in Gaza said they were unable to process his paperwork.

That triggered our community guidelines, which are to never turn away from a dying child who has no other options. Our Gaza coordinator Amar worked to get Kenan out of Gaza without the assistance of the local authorities, and this evening by God’s grace Kenan was on his way to Israel:

He safely reached the Sheba Medical Center, our main partner hospital, where he is now being assessed and God willing prepared for surgery. We thank God for every such child we see, like Wesley, “a burning stick snatched from the fire.” 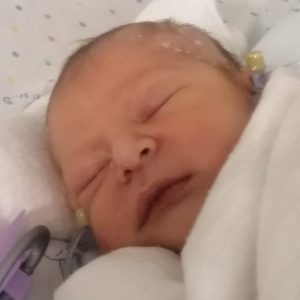 Kenan is a week old child from the Gaza Strip diagnosed with a single ventricle of the heart.

Kenan does not yet have a local leader to advocate for prayer and financial support for his surgery.

As of right now, Kenan still needs $4500 toward surgery and related expenses.