Doctors at Hadassah Medical Center in Jerusalem succeeded yesterday to dilate the pulmonary valve of Osama’s heart by using a balloon inserted via catheterization. They are hoping this may be the only treatment he will need and he can go on to a healthy and strong life. We were able to spend some time with Osama’s 23-year-old mother, and Margarita and Berith took her for a walk to the hospital shopping center. Osama is her first child, and she shared there are family difficulties back in Gaza. We’re praying for healing for both Osama and all of his family. This was the scene late tonight as Magen David Adom personnel rushed newborn Osama from Gaza into the cardiac critical care unit at Hadassah Hospital in Jerusalem.

Osama was born with narrowing of his pulmonary valve, and an attempted catheterization in Gaza failed to open it up. He arrived safely in Jerusalem and was stabilized, and doctors are now studying his anatomy to find the best path to attempt to save his life. 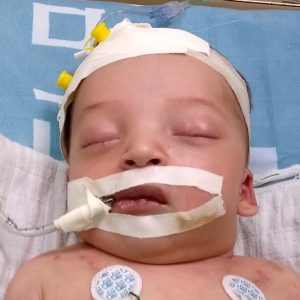 Osama is a days old child from the Gaza Strip diagnosed with pulmonary stenosis.

Osama does not yet have a local leader to advocate for prayer and financial support for his surgery.

As of right now, Osama still needs $4000 toward surgery and related expenses.