Glory to God for our beloved little boy Drood and his father and that He guided everything in his perfect plan. After the little gentleman and his father had spent a lovely time  at our Guest House in Jerusalem, and enjoyed their time there, they had to come back to our community house situated on the beautiful Jaffa coast. We had a farewell party for Drood and his father at the community house in which we celebrated Drood’s good recovery. We are also giving glory to our heavenly father for the perfect gift of the quickly successful journey of Drood and his father back to Kurdistan. Indeed, “Every good and perfect gift is from above, coming down from the Father of the heavenly lights, who does not change like shifting shadows.” 1 Chronicles 16:11-12.
The reason why cute Drood and his father had to come back to Jaffa is that they were both required to do a Corona test at the Airport to make sure that they could fly back home. Co-worker Sebastian and I drove them there. PTL that the text results were negative and that they are able to see their loved ones finally very soon again. Even though I haven’t really met or known Drood and his father very well,  they had been here just a little period of time and I was in quarantine for most of that time, I’m pleased that I’ve had the opportunity to have met this precious little Drood and his really friendly father. It was lovely for the whole Shevet community to have had the opportunity to get to know them and follow them during their successful journey, and praise God, a fast journey.
Thank you very much for your prayers and your help in other ways. After precious little Drood and his father return to Kurdistan, they will have to continue with the treatment of his medicine. After a month, they need to visit a Doctor in Kurdistan to do another Echo. If everything is still fine, they can stop the treatment of his medicine. So your prayers are still appreciated.
Hide Comments Show Comments

After cute little Drood and his dad had spent some time at our Shevet Guest House in Jerusalem and had some lovely days touring the city, they had to come back to the Sheba Medical Center today to check if Drood has continued to recover well after the surgery. He needed an Echo to see how he was doing and while he waited, he was falling asleep peacefully. PTL that the outcome of the Echo was good. This means that he is ready to return to Kurdistan together with his father. When the Echo was finished, Drood and his father went outside the hospital and enjoyed their time. Thank you very much for your prayers and your help in other ways. After precious little Drood and his friendly father return back to Kurdistan, they have to continue with the treatment of his medicine. After a month, they need to visit a Doctor in Kurdistan to do another Echo. If everything is still fine, they can stop the treatment of his medicine. So your prayers are still appreciated. Drood has made a fantastic recovery following his surgery, which was only this past Sunday. Such a good recovery that he has already been discharged home.
He and his dad returned to a joyful welcome from the other families at our Shevet house in Jaffa. Drood is being extremely cute, walking over to everyone and greeting them which an outstretched hand, and saying ‘hello,’ in his lovely little voice.
Later this evening, they will travel to our Shevet Guest House,  located in Jerusalem. Hopefully Drood will continue to recover well, and will be able to return to Kurdistan fairly soon!
Hide Comments Show Comments When I arrived to Drood’s room in the intensive care unit today, I found him very awake, and shouting loudly for his father, who had attempted to take one minute to eat some lunch. Drood loves his father a lot, and is keen to be in his arms at all times! There are a few clues that Drood definitely did have a major heart surgery yesterday, such as the drainage tubes, and his drowsy state due to some medication, but otherwise he seems completely full of life, moving around the bed, trying to escape!
Thank God for this excellent recovery so far, and for filling his father with joy and hope for the future.
Hide Comments Show Comments Drood was taken into surgery this morning, just after 8 am. The waiting time passed quickly with his father. Although he was worried about the well-being of his precious and youngest son during those four long surgery hours, he coped well, with his attention distracted from the surgery by showing me pictures of his other three children back in Kurdistan, and by finding a cup of tea. Drood was brought out of the operating room just over four hours from the start of the surgery, as predicted. Of course his father jumped up very eagerly to see him, and asked the surgeon about the operation.Thankfully, the surgeon told us that it had been very successful and without any complications. They were able to close the hole in his heart, and they hoped for a good recovery.
Drood was quickly stabilised in the Intensive Care Unit, and his father was able to sit at his bedside. Later on this evening, we heard that Drood had already been extubated! Praise God for the successful surgery, and for the quick recovery so far.
Hide Comments Show Comments Sweetie Drood went to the beach for the first time today! It was lovely to hear his little voice babbling out in happiness to see the sea, and sit on the sand for the first time. Thankfully he could enjoy this new experience, as the evening brought a much less pleasant one… Although Drood loves going for a ride in the car, he isn’t too pleased about the destination, the hospital, because here he needs a lot of tests (for example a corona test, and a blood test) to prepare him for surgery tomorrow!

Please pray for Drood, who is a very lovely, sweet and sensitive little boy. The doctors at Sheba Medical found that Drood’s echo images from last time were not clear enough to see his heart properly, so today he was brought back to the hospital to have an echo with sedation.

Again, at the start of the process, Drood was very upset and afraid of being brought back into the echo room. As soon as his tee-shirt was off, he realised what was going to happen. This time though, one of the doctors gave him a sedative medication which did take a while to start working. He remained awake, but soon became much more relaxed, looking at a video on the phone and getting distracted by his hand up in front of his eyes.So the technician was able to perform his echo, which the doctor could see. Drood’s diagnosis of VSD was confirmed and the doctor recommends that the hole is closed in a surgery. The father was expecting that there is a problem with the valves in Drood’s heart also, based on what he heard from previous assessments in Kurdistan, but thank God in this more detailed echo today, the doctor saw that the valves were working well and he does not expect they need any intervention.

It’s possible that Drood’s surgery to close the VSD can be as early as next week! We hope and pray for the best for him. Drood was up nice and early for his initial assessment at Sheba hospital. He loved watching the traffic go past during the journey, and before long, fell asleep in the car.

Drood’s echo was quite difficult, as predicted by his father, because he cried and protested with a lot of strength throughout the whole thing. Despite his father’s best efforts, Drood was very upset about having the Echo, and the ECG, which was sad to see. The outcome of Drood’s assessment is to be discussed by the medical team here, before coming up with a plan for his intervention.  Thank you for your prayers for Drood.
Hide Comments Show Comments Drood is the youngest of the cohort of four Kurdish families whom co-worker Julio and I had the pleasure of meeting from the airport yesterday. He is just over one year old, and has two brothers and one sister at home in Kurdistan. He is accompanied by his father, while the mother is staying at home with their other children. Little Drood is settling into his new home here nicely, happy with his father and happy playing with the other children.
Drood has a VSD; a hole in his heart, which was found when he was six days old. He has experienced symptoms related to this, like fast breathing, getting tired very easily when trying to feed, sweating a lot and blue fingers and eyelids. Drood’s dad expressed his own sense of thankfulness that Drood has grown and with that growth, he has improved with some of these symptoms and has become much stronger. The doctor in Kurdistan  recommended a surgery once he got older and that is why he has come to Israel.
Drood will go to the hospital here this week, and we hope for a plan for surgery soon for him.
Please pray for the best outcome for Drood.
Hide Comments Show Comments 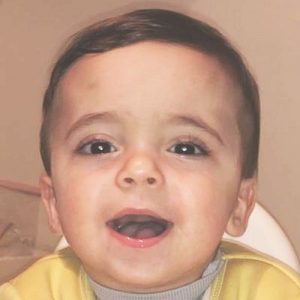 Drood does not yet have a local leader to advocate for prayer and financial support for his surgery.

As of right now, Drood still needs $5500 toward surgery and related expenses.