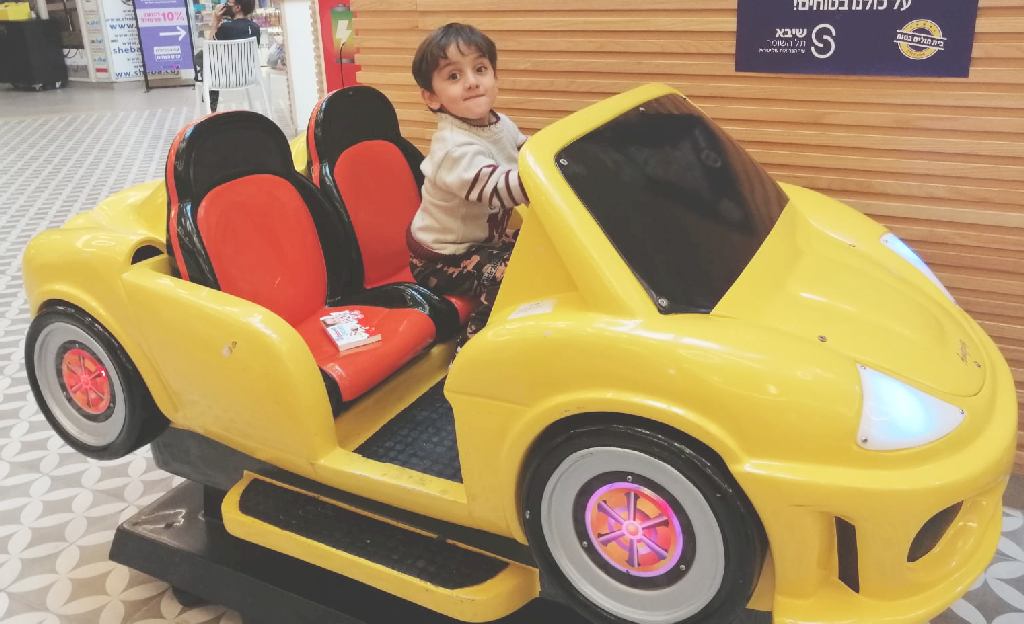 The very active Ahmad had a nice time at our community house back at Jaffa. He’s a very happy boy and has a high energy level. We are having fun dance sessions at Shevet right now, in which some of us staff members are trying to learn Kurdish dancing. Ahmad likes to join these dance sessions. It is lovely and funny at the same time to see his dancing skills. Somedays when I have a lack of energy, I wish I could have his energy, Thank God though, as Ahmad is doing so well, and has the possibility to live his life like a normal boy, and that he can do all the things boys his age are doing.

Today he needed to return to Sheba Hospital for another Echo, The doctors agreed that he can return to Kurdistan without needing a surgery now. He will likely need another Catheterization in one or two years to dilate the stent. He may also need a surgery in the future, possibly within ten years, as he grows. Praise the Lord that he can stop one of his medications as planned on Wednesday, but should continue aspirin his whole life.
“Inshallah” (Arabic for God willing), Ahmad and his mother can return to Kurdistan in the next few weeks. Even though it is lovely and fun to have both of them with us and we are enjoying our time together, we want them to be back with their family even more.
Due to the Coronavirus situation Israeli airports will be closed for another two weeks, so there is not yet a possibility for them to return. That means we can enjoy our time together a bit longer. But please pray that the airports will be opened soon so Ahmad and his lovely mother can return to their family.
Hide Comments Show Comments 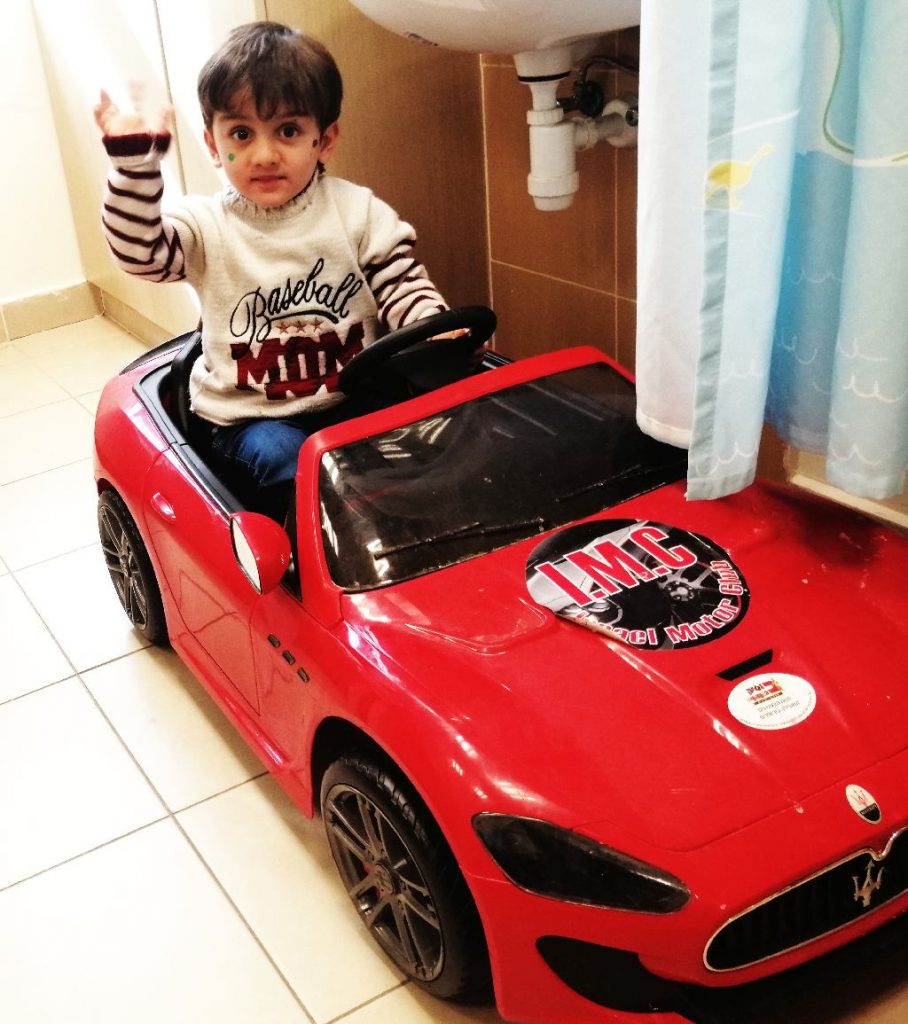 The main phrase we have heard since Ahmad has been discharged, is that he doesn’t even know there was any procedure done for him. He has been rushing about, playing on the beach and trying out swimming in the sea. It has been great to see how active he is.
Today brought the happy news that the intervention from the Catheterization appears to have been very successful. The stent has been dilated to a good size so blood is flowing well within the heart. 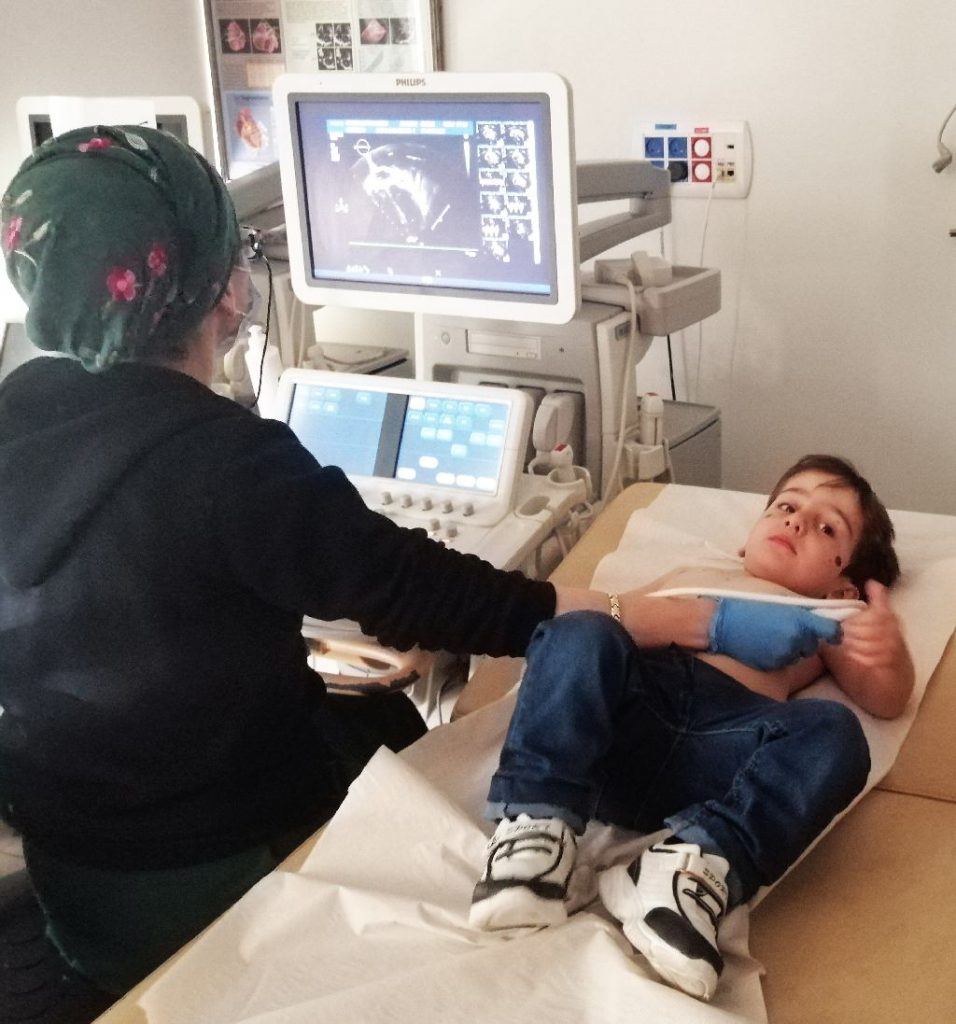 Thank God for Ahmad’s good result, and we are all hopeful that it will not be too long before they can return to Kurdistan. Thank you for your continued prayer support for little Ahmad.
Hide Comments Show Comments 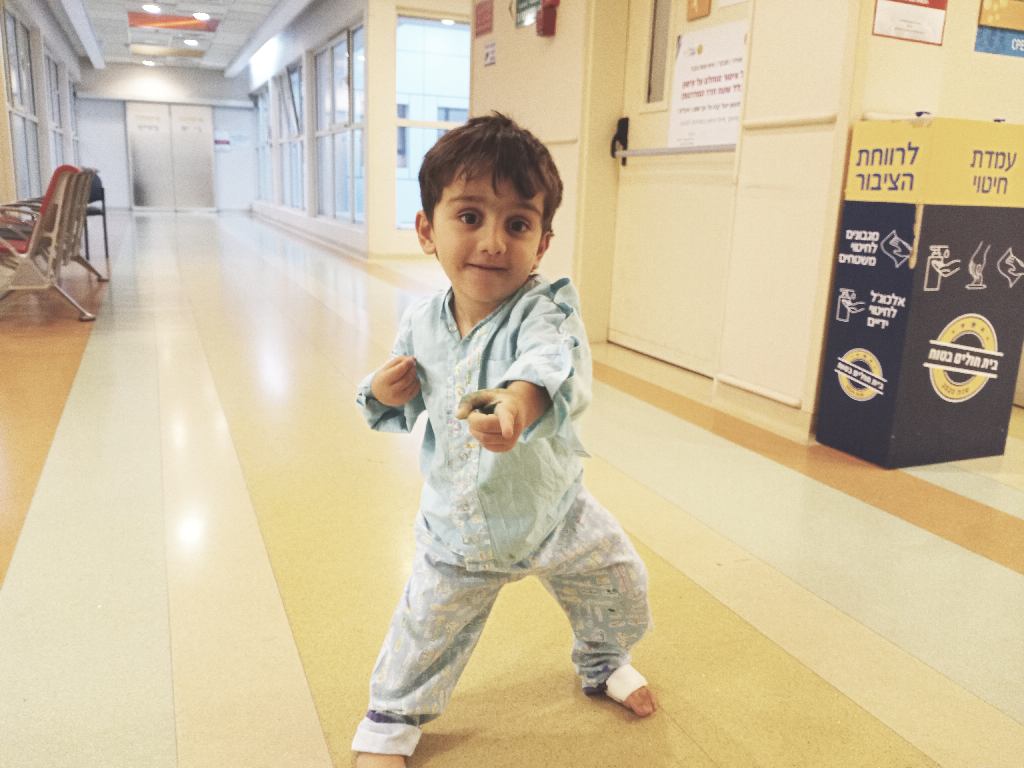 The day after his catheterization, Ahmad was up and about. When I arrived, his mother was by his bed diligently getting everything packed in anticipation of his discharge as he sat and intensely colored a picture of a turtle.

I had picked up a large prescription order of medication for another child shortly before that child’s discharge, and when I came into his room with the medicine boxes, Ahmad said in Kurdish, “Thank you! Is this all for me?” His mum laughed at that!

He has brought his signature humor and joy to the Jaffa house where the other families welcomed him and his mum back to Jaffa with their usual kindness and warmth, and they were certainly happy to be back especially with the great outcome of yesterday’s Catheterization.
Ahmad and his mother will return to Sheba Medical Center for a check-up next week to see how his heart is adjusting to the established work of the catheter. Thank you for praying for this wonderful boy!
Hide Comments Show Comments 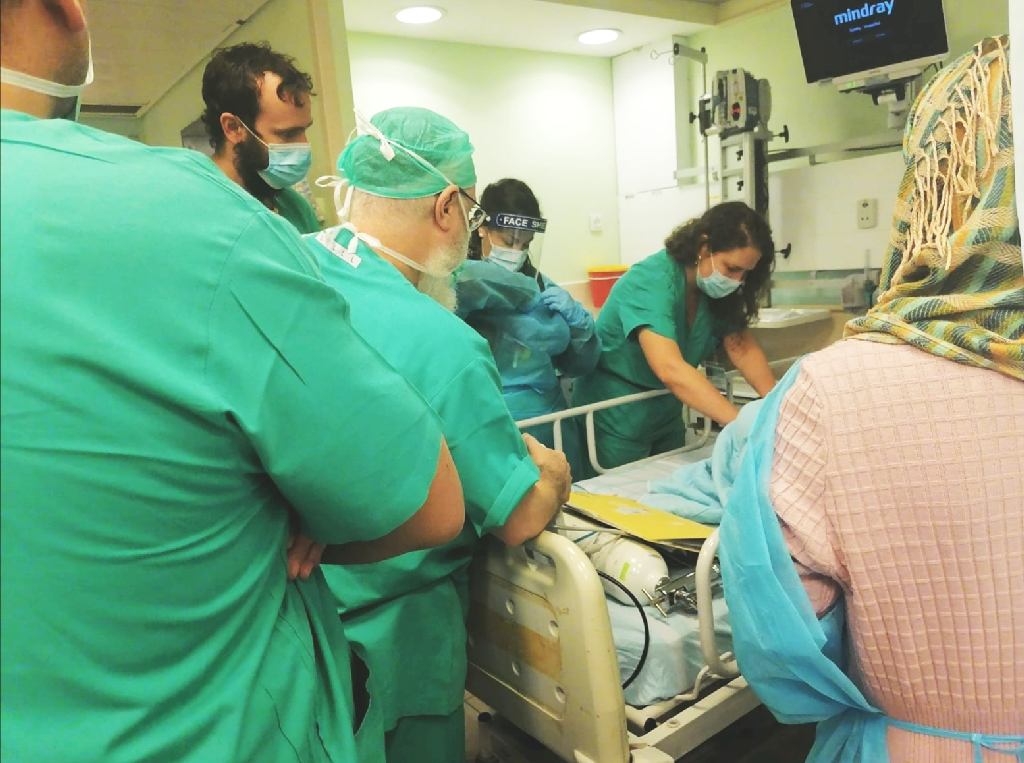 Today, Ahmad had his Catheterization. Co-worker Alena and I waited for the duration of the procedure with his mother. She was a little tearful, but did very well whilst waiting, reminded by her husband that God is in control. 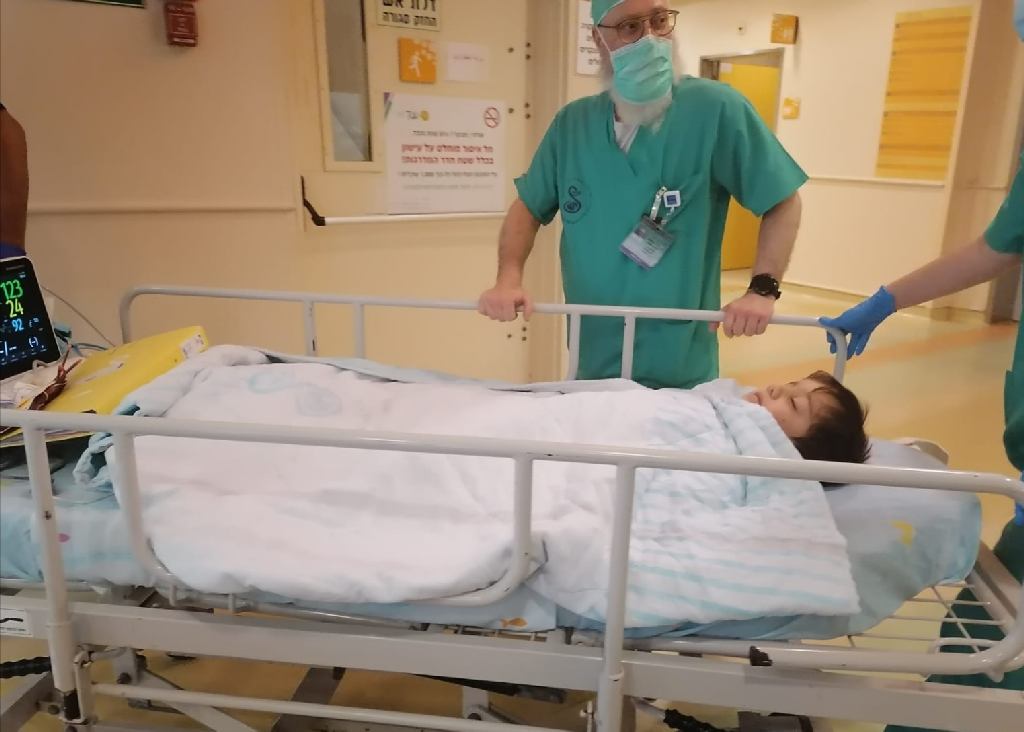 After about three hours, Ahmad emerged into sight. His beautiful mother embraced the doctor, who declared that the procedure had gone well, and they disappeared into the ward. 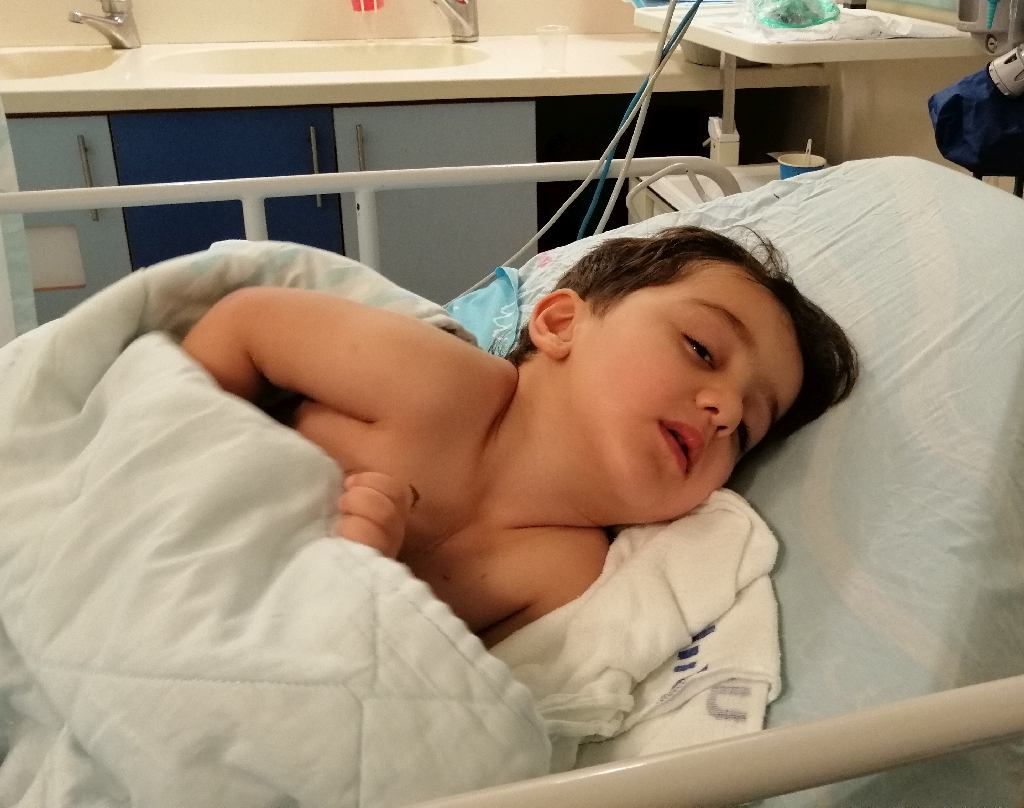 Ahmad soon afterwards was semi-awake, and tried his best to greet us before succumbing to the residual Anesthesia and falling back asleep. His mother was hopeful that perhaps on this occasion, his heart needs just this Catheterization, to improve the function. We will see how he recovers!

Thank God for this lovely day together and a good outcome for Ahmad. 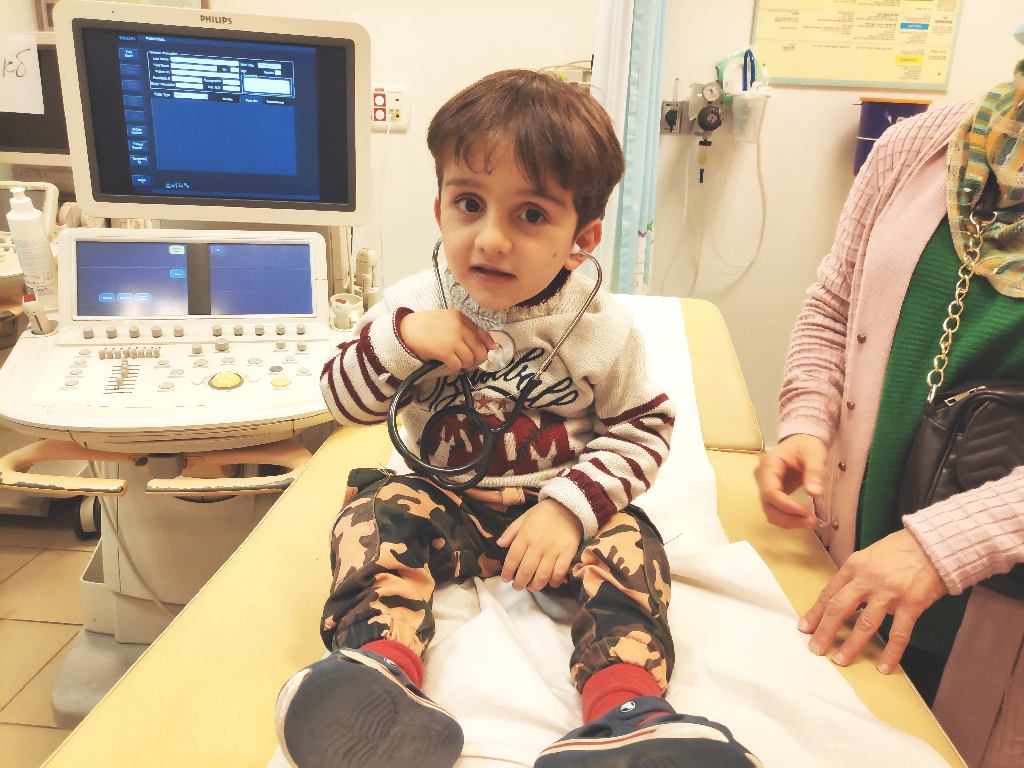 Ahmad and his mom have been staying in our Jerusalem Guest House for a couple of weeks, enjoying some Jerusalem strolls and sight-seeing. They returned to our Jaffa House one week ago and it was lovely to have them back with us. Ahmad is an extremely active boy, who enjoys walks to the beach and talking a lot in Kurdish so sadly, I don’t understand him, but I’m sure he has a lot to say. He’s never quiet, just a typical child. That’s what makes it hard sometimes to keep him calm during his ap-pointments, but somehow his lovely mother manages him, and did so again today when he had his Echo. 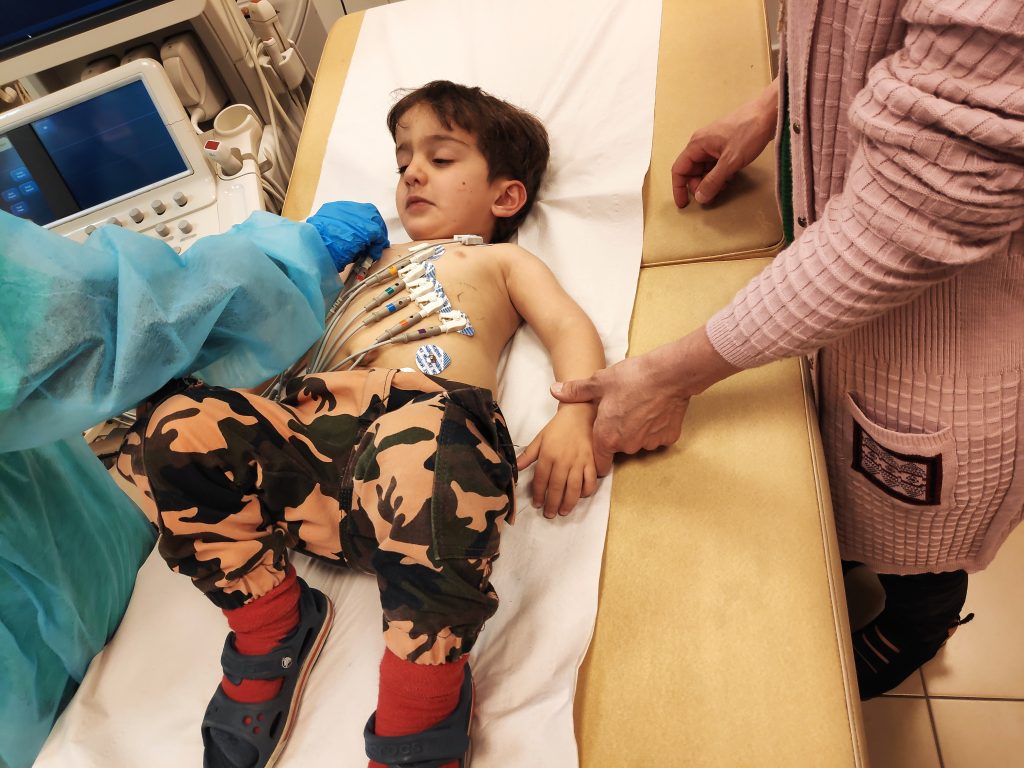 Another thing the mother of Ahmad manages well, is cooking. She made the delicious “Dolma” for us on the weekend, Co-worker Carina loved helping her with it. It was made with lots of love and we all thought it was extremely delicious.

Even though I don’t speak Kurdish, it was really nice to be able to spend a long time with Ahmad and his mother today as we waited for the admission process. Ahmad loved playing with the train in the childrens’ waiting area, whilst his mother got told what will happen to her beloved son. 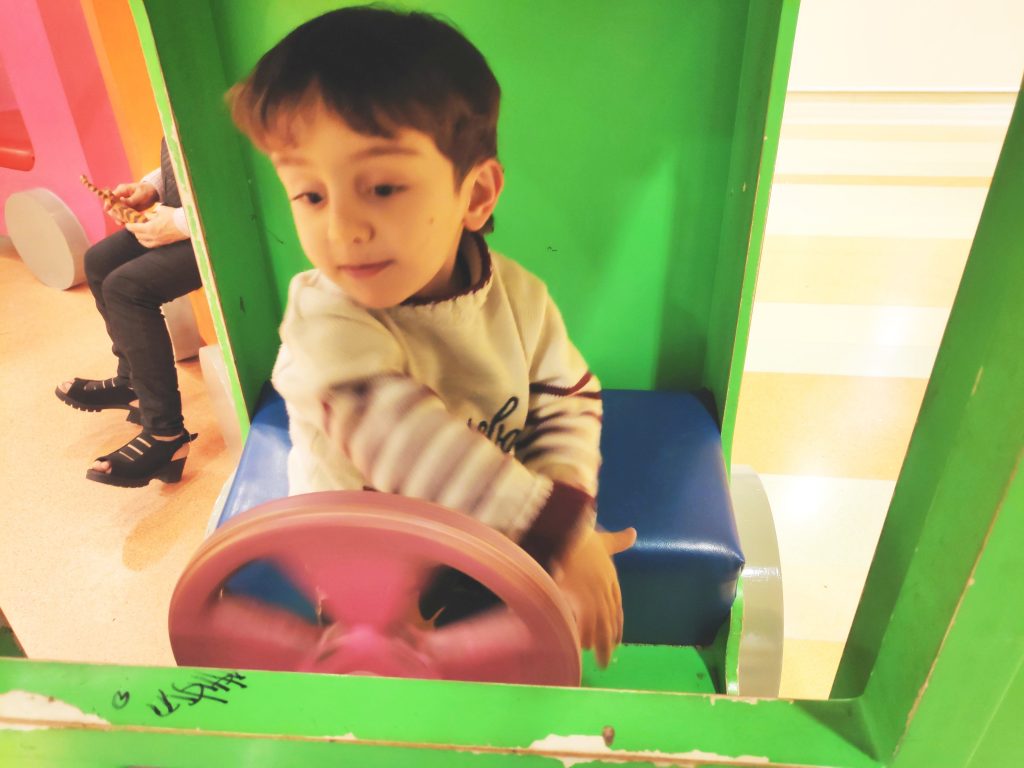 Despite the long wait to get into their room, finally this too was accomplished. We were able to experience a lot of kindness and patience from the staff at the hospital, they even let him play with a stethoscope while we were waiting.

Please pray for Ahmad and his lovely mother as they are spending tonight in the secondary ICU. We’re asking for God’s blessing for Ahmad’s catheterization tomorrow, thank you for joining us in this prayer. 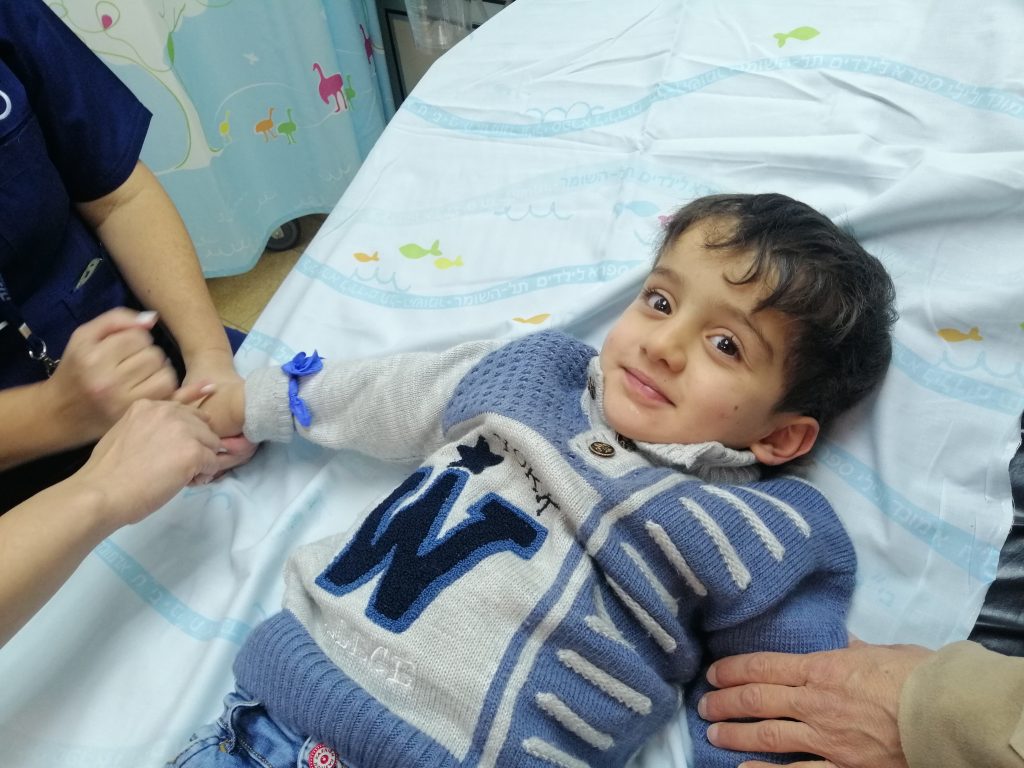 Ahmad, possibly the perfect patient, had his MRI today, rescheduled from the last occasion when he was ill.
First, he had a cannula put in his hand, which was a matter of counting from one to six and it was done. He was quite happy to look at it afterwards despite one initial squeak of pain. Then, he went to the MRI department, and was taken inside with his mum. Before he knew it, he was asleep, and then waking up again a while later in the recovery room.
Mum had bravely waited during the hour of the test, and was faithfully by his side until the doctor had written the discharge report. Ahmad was also very pleased to be given a ball as a ‘well done.’ 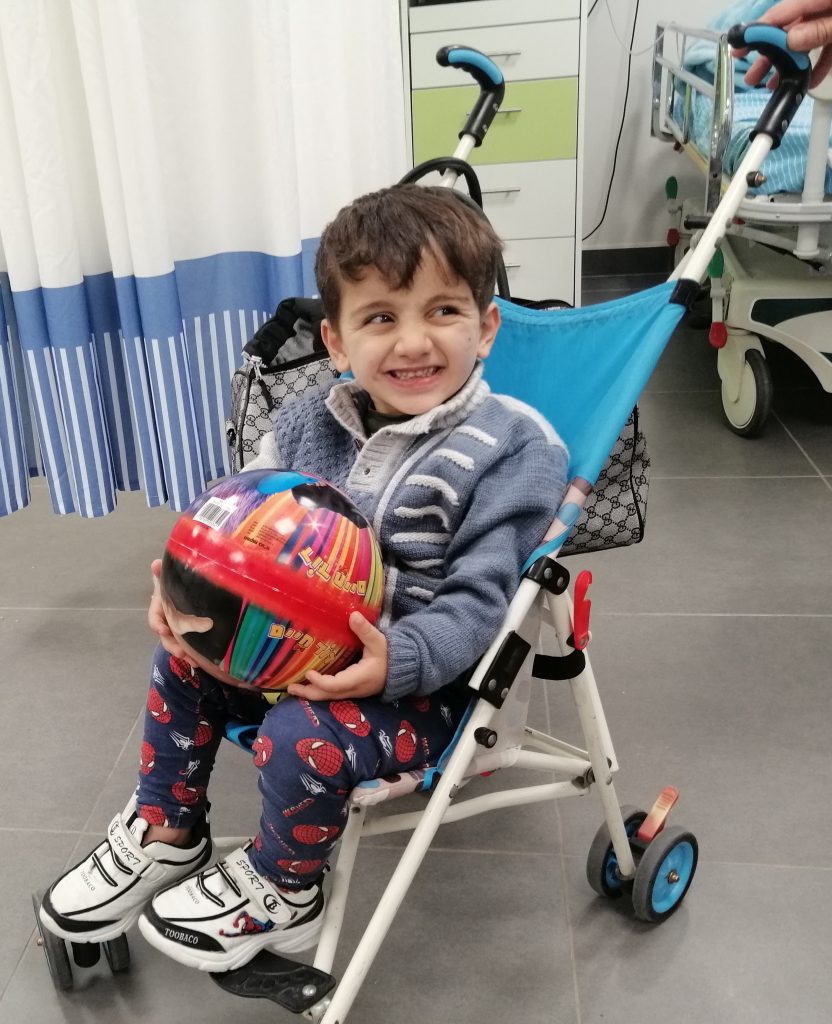 The doctor will look at the MRI scan in the coming days, and plan his surgery.
Hide Comments Show Comments 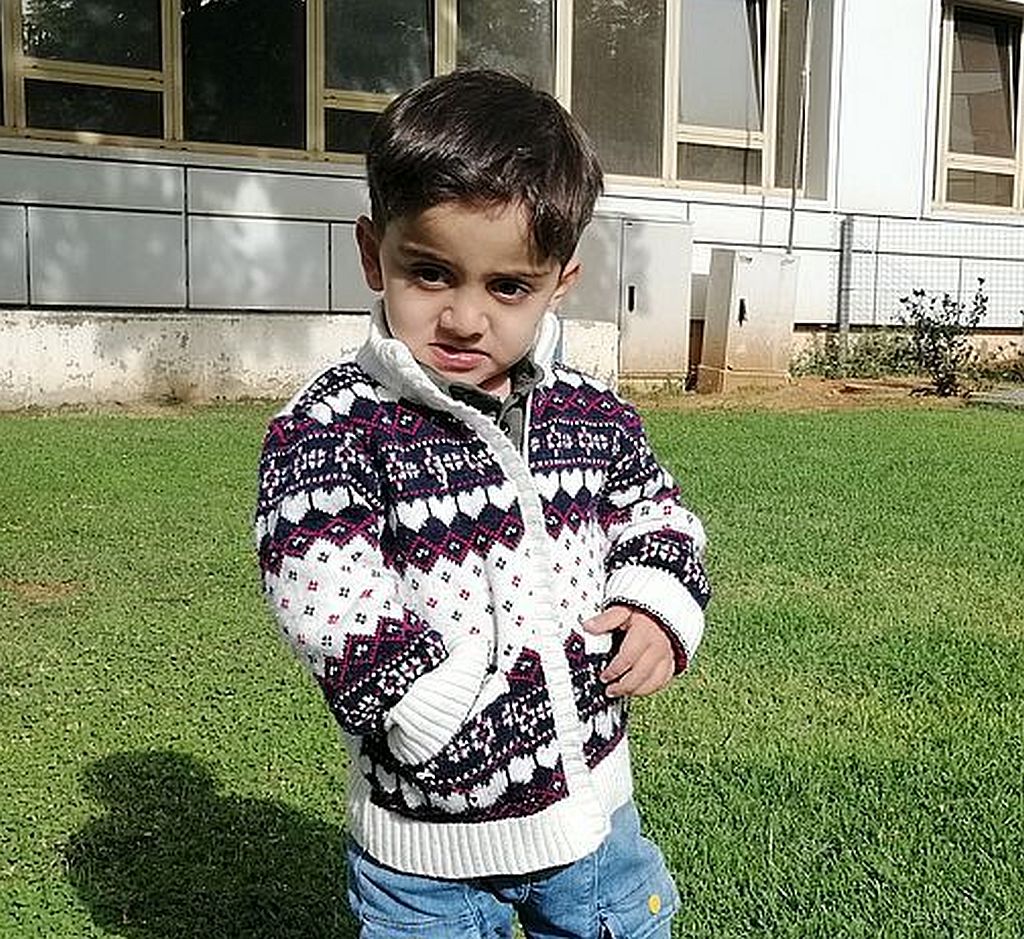 Ahmad was supposed to have an MRI scan today to help make the assessment of his heart. However, he has a fever of 39.1c, and so the doctors needed to postpone his assessment for today. 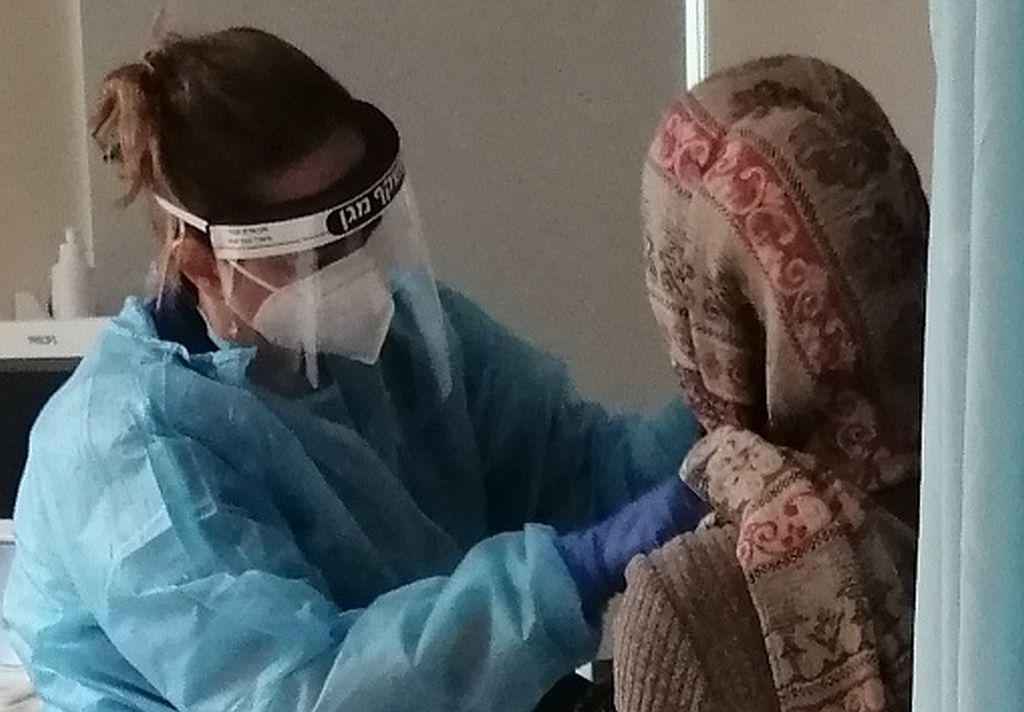 He also needed to have a corona test, which he handled beautifully, thanking the nurse afterwards! Ahmad was quite disappointed to not be able to spend time with the doctor today, but we are hoping he feels well and that his corona test comes back negative.
Hide Comments Show Comments 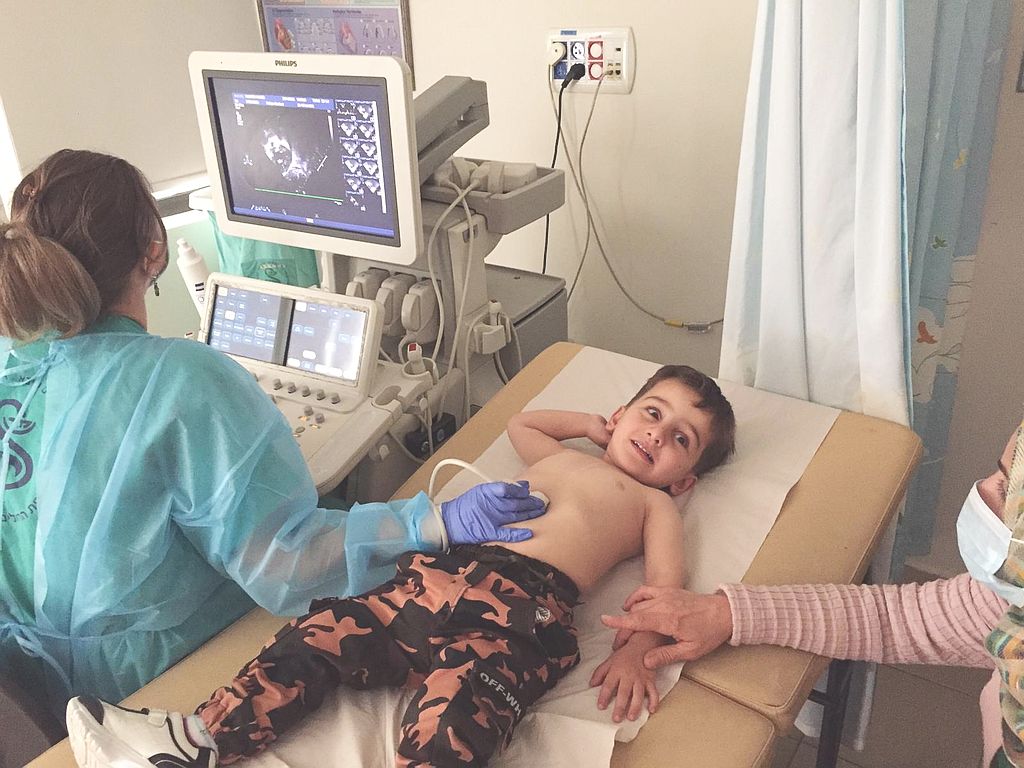 Happy Ahmad had his first trip to Sheba Medical Center here for assessment. He managed to cope very well with the disappointment of not being allowed on the play equipment.
The outcome of his echo is not yet confirmed. The team of doctors will assess the echo and information from the appointment before putting together a plan for Ahmad.
Perhaps he will need a catheterisation as well as a surgery. Thank you for your prayers for Ahmad.
Hide Comments Show Comments 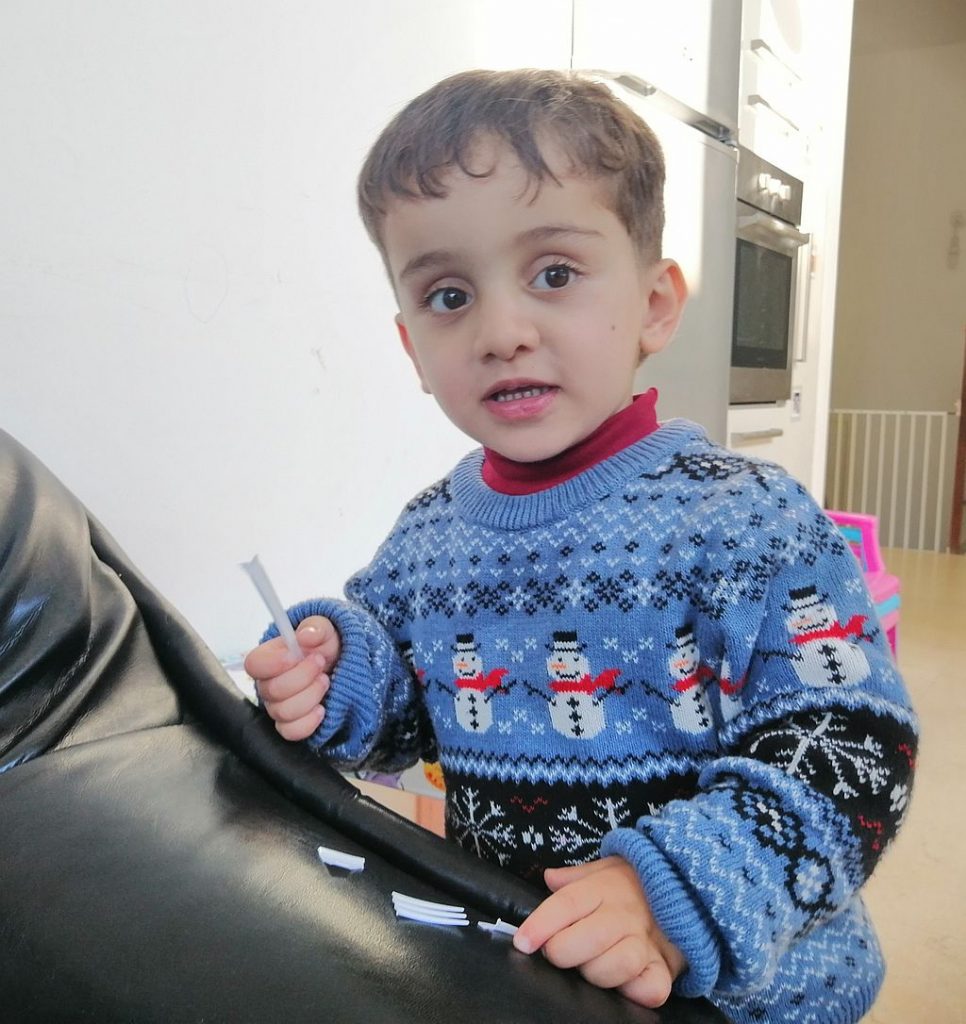 Inquisitive and happy Ahmad is one of four Kurdish families which co-worker Julio and I were honoured to collect from the airport yesterday. 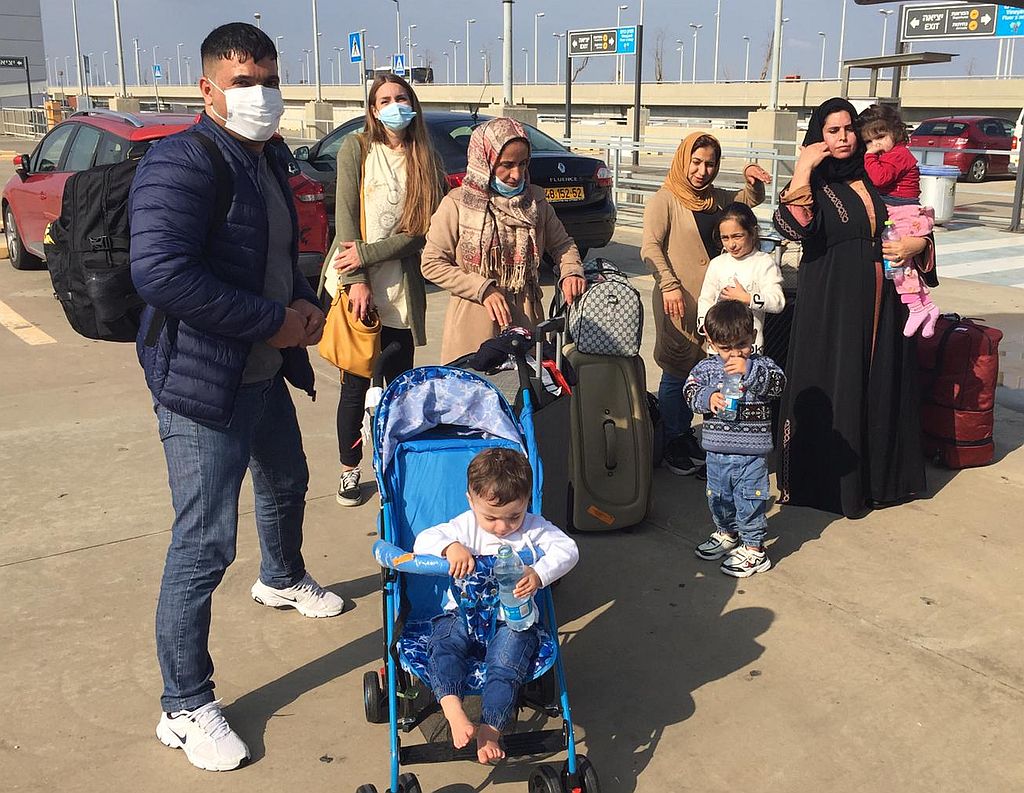 Although they must quarantine due to Coronavirus requirements, it is a joy to see this little face peeping through our balcony fence, excitedly calling out to his new neighbours his Kurdish greeting: “Choni bashi!” 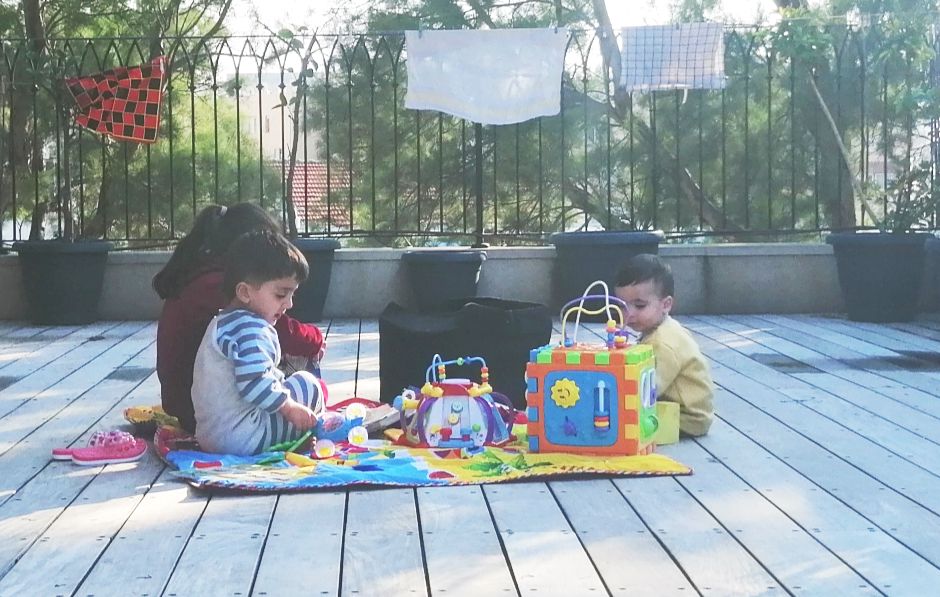 Ahmad has had an open-heart surgery previously in India, which has kept him in reasonably good health. Despite becoming tired easily accompanied with heavy breathing, Ahmad is developing well in every aspect. Just like other three year olds, he loves playing and can walk and talk very nicely.
The doctor in Kurdistan has said that Ahmad needs to have a surgery here soon, and we will go to Sheba Medical Center together tomorrow morning so that the doctors here can make their own assessments.
Please pray for Ahmad and his mum as they settle into life here in Israel.
Hide Comments Show Comments 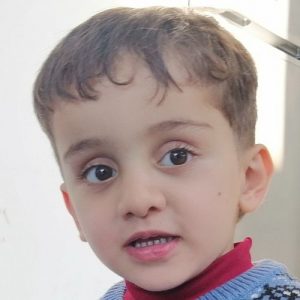 Ahmad does not yet have a local leader to advocate for prayer and financial support for his surgery.

As of right now, Ahmad H. still needs $5400 toward surgery and related expenses.