Today I was able to visit Awmed’s grandmother in the ICU of Sheba Hospital. The lovely lady saw me from her room and came to me outside. She was crying! I could not do or say anything. But perhaps words were not needed in that moment. With an embrace we show our love, our support, and say I am here with you and I sympathize deeply.  That’s what I tried to do. I hope the Lord continues to comfort her heart.

Still, it is good news that the condition of Awmed is stable. He is intubated however and we need to wait and see whether he can be removed from this sooner than later.

Please keep praying with us for this wonderful boy and for his eventual improvement. Bless his grandmother with peace and confidence, that God is able to do more than we can possibly imagine. Awmed underwent a second surgery at Sheba Medical Center today. In the morning they transported him from the ICU to the operating room with his concerned grandmother trailing right behind the crib as it rolled down the hall and into the surgery area. There are two sets of electric double doors, one that you can go through with the team, and the second where, after the anesthesia is administered, the child is taken to the room of the operation. When Awmed was wheeled through the second set, his grandmother wept as she had to release him at that point. We retraced our steps to some empty chairs outside the operation area as the waiting began. In the middle of the surgery, Awmed’s grandma was messaging back and forth with her family in Kurdistan, including Awmed’s young parents. A combination of Awmed having another surgery, and knowing he’ll need a pacemaker replacement in five years, affected her deeply. It means she and Awmed’s parents will have to be continually adjusting their collective hopes for this beloved child’s future and thinking in advance of all the “what if’s.”

I wrote last week in the Shevet Achim weekly digital ‘Prayer Update,’ that in lieu of one of Awmed’s parents being with him, his grandmother is exactly the person that you would want taking care of a baby, especially in the midst of a complicated recovery. Co-worker Georgia and I reiterated those words today.

At one point, grandma was scrolling through her phone and came across a picture of Awmed she had sent. She stopped scrolling and her eyes concentrated on his smiling face in the photograph, she kissed it as she cried. She faced a very difficult day with such steadiness. At the end of the day came the relieving news that the surgery was done. Doctors were able to close Awmed’s VSD, in addition to successfully implanting a pacemaker.

Thank you for praying for this beautiful family, and please continue to hold them in your prayers.

I met the mother of Awmed today at the Pediatric ICU of Sheba Medical Centre. She was worried about her grandson. Tomorrow, Lord willing, he will receive a pacemaker in his surgery because of his AV block. The surgery will start at 8 am.

May our God keep the blessed boy through this time! Please pray for the surgical staff and all concerned tomorrow, and for his grandmother, who needs peace and comfort in her heart.

The lovely Awmed is still in Pediatric ICU in Sheba Hospital and still intubated. After the collapse of his left lung this week, he underwent a bronchoscopy to find out if there is some structural aberrance of the organ.

Thank you Lord, they found the lungs are working well and there is not a problem within for extubation. The doctors want to wait a few days more however, before they release Awmed to breath independently from the machine.

Please pray for this wonderful child! His grandmother needs a miracle. Thank you so much for all your prayer support during the whole time. We hope for the preternatural recovery of his body. With God, all things are possible. The grandma of Awmed came to sit with co-worker Carina and I today outside the Pediatric ICU at Sheba Medical Center today. It was good to see her, along with two other Kurdish mums currently at hospital with their children.
Baby Awmed however, is still trying to recover from his big surgery. Thankfully, the Bronchoscopy revealed no structural problem causing the difficulties Awmed is having with becoming extubated. They need to continue to watch him and wait to see how he improves. At the same time, they must pay attention to the AV block, whether it resolves or not.
Please lift up Awmed in your prayer and be sure to remember his kind grandmother who is faithfully by his side.
Hide Comments Show Comments Baby Awmed had a bronchoscopy today because of his left lung having collapsed earlier this week. In addition to this, he is presenting an ongoing problem with his AV canal which he may need further intervention for.

His grandmother is faithfully with him as he struggles to recover, but it is also a struggle for her as well. Both of them are in need of prayer.

Please lift this beautiful child to our Great Physician. The day after Awmed’s surgery, he was able to be extubated.  However after this, one of his lungs collapsed, he had to be re-intubated, and remains so today.
Please pray for this sweet boy and his grandmother. There are two other Kurdish mothers currently in the ICU that are supporting one another, so thank God for this sense of community they have here and especially at the hospital.
Also, please pray for his family back in Kurdistan who are surely anxious for their son’s health. We pray that he will return to them a healthy and vibrant boy.
Hide Comments Show Comments As I walked out of the secondary ICU, there was Awmed’s grandmother, walking toward me at the same time. Sadly, she was very sad and upset by the commencement of Awmed’s surgery. She was crying a bit, so I gave her a hug, and tried to comfort her. We sat down in front of the surgery area to begin waiting together. Even though we couldn’t talk much due to language barriers, it was good that I was with her and that she was not alone during this difficult time.

The surgery took about seven hours to complete. Shortly after, Awmed was moved to the ICU. His grandmother and I still had to wait for another half hour until we were allowed to enter the ICU because the doctors needed to take place him on various machines and to prepare everything. When we were allowed to enter the ICU, Awmed’s grandmother was crying silently because she was happy that the surgery was over, and that it went well.
Thank you for your prayer support for both Awmed and his grandmother. Our prayers go up for his complete recovery and for peace for his grandmother.
Hide Comments Show Comments Awmed has been having some noisy breathing, which his Grandma has been worried about. She has been told in Kurdistan that it means he has a chest infection. Certainly when he cries, he gets to be very squeaky and wheezy. This, coupled with his complexion’s greyish color from dropping oxygen levels when he cries, can be quite worrying for Grandma to see. Thankfully, the Pulmonary doctor saw Awmed and put his Grandmother’s mind at ease. He was a very kind doctor, who examined Awmed, and explained that there is nothing to be worried about. The squeaky stridor is due to weak cartilage in his trachea, which will become stronger as he gets older. The wheezing sound is due to the abnormal blood flow in his lungs, due to his heart condition. The doctor assured her that there is no chest infection, and that after the heart defect is corrected in surgery, the wheezing sound would stop.
As this was the outcome of today’s appointment, Awmed and his grandma went up to the Pediatric Cardiology Department, and saw a nurse who took Corona tests for them both, in order to prepare to welcome them back to Sheba Hospital tomorrow for surgery on Thursday.
Hide Comments Show Comments They just went into their hospital room and are now waiting for his surgery which will be tomorrow.

Please pray for him and the doctors that they will perform a successful surgery on Awmed, and also for Awmed’s grandmother not to be too worried. Happy Awmed had his first appointment at Sheba hospital today. He and his grandma were up early, and spent a long day having different assessments; an echo, ECG, blood test and X-ray. The hospital staff commented how well he seems to be growing. The doctors will discuss his case and decide what surgical plan to make for him. It could be that he needs two surgeries in order to help his problem. Awmed and his aunty have arrived in Israel, along with four other Kurdish families. He has a diagnosis of dextro-Transposition of the Great Arteries (d-TGA), and has had a catheterisation in Kurdistan which has helped the oxygen flow around his body. However, his oxygen levels are still low, and for this reason he needs a surgery. He will have his first appointment at the hospital on Wednesday. Please pray for Awmed as he heads into the hospital, and for peace for his parents back in Kurdistan. 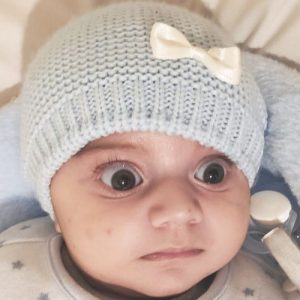 Awmed is a months old child from Kurdistan, northern Iraq diagnosed with Dextro-Transposition of the Great Arteries.

Awmed does not yet have a local leader to advocate for prayer and financial support for his surgery.

As of right now, Awmed still needs $6850 toward surgery and related expenses.