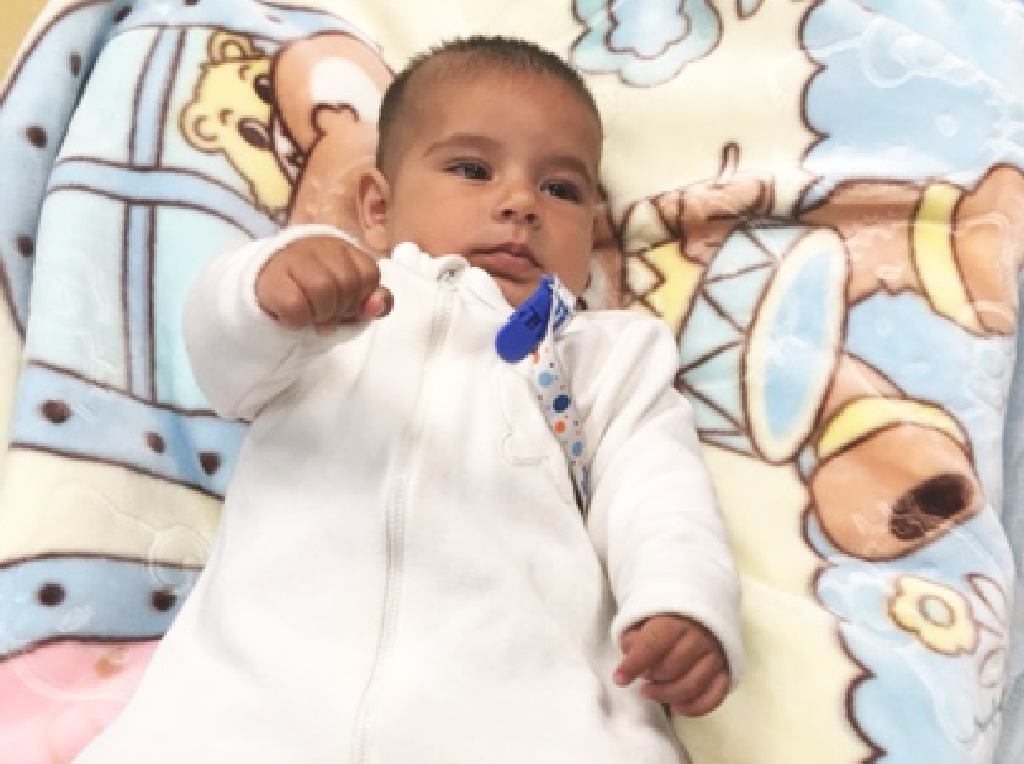 We went to Sheba Medical Center today with our blessed Eliyas to keep an Echo appointment and a check-up appointment for him. Eliyas was calm and smiled at us as we played with him during the waiting time. He was a very pleasant adorable little boy to be with. And thank God, we waited a very short time for the medical team to call us in.

The Echo was very good. The doctor was happy with Eliyas, and said that he has grown some and has a healthy look. Eliyas’s father was proud of his baby boy! 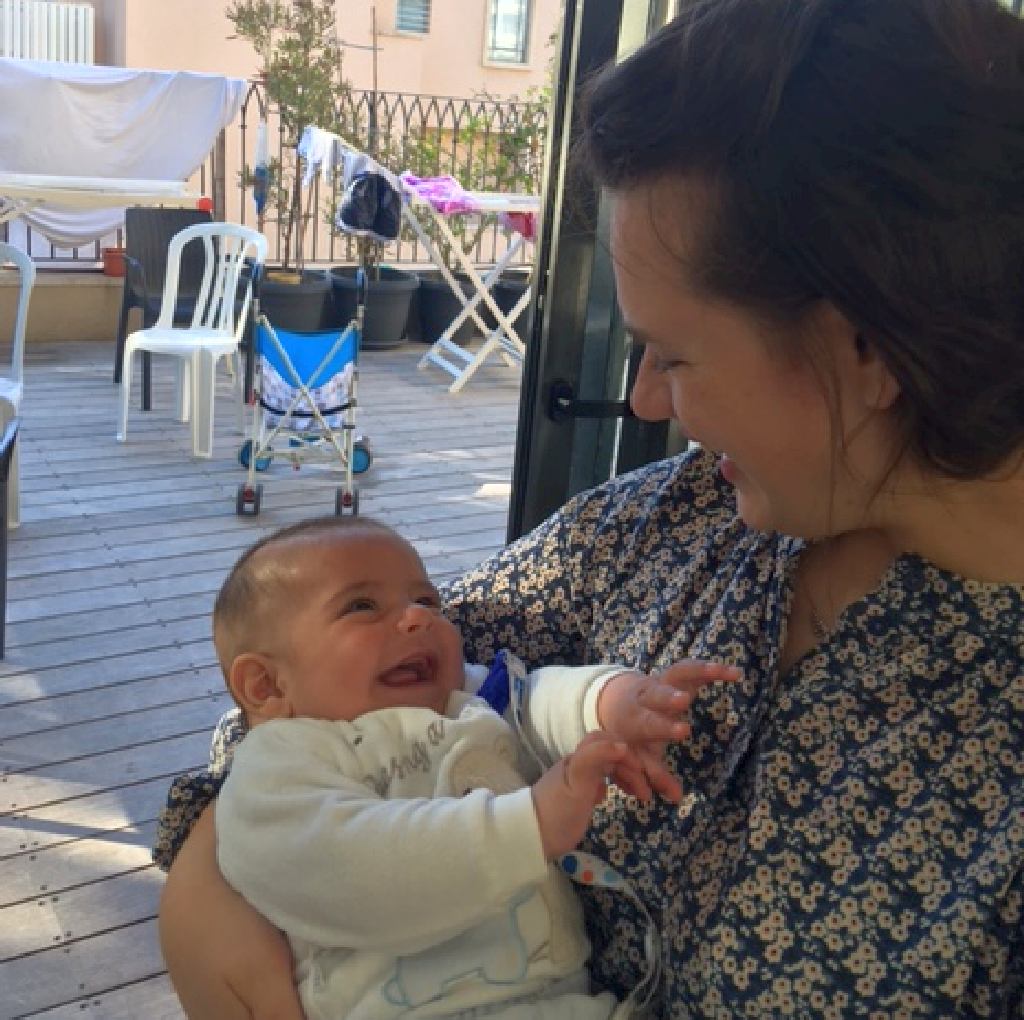 Eliyas was fitted last week with a halter to measure his heart activity for twenty-four hours. The results from the halter reading were very good so the doctor discharged him to go to Kurdistan.

Thank God for his care above this blessed boy. It was so nice to see how glad Eliyas’s dad was for his beloved son. Thank you so much for all your faithful prayers. Eliyas’s recovery was fast after a dangerous surgery. All the glory to our Heavenly Father! 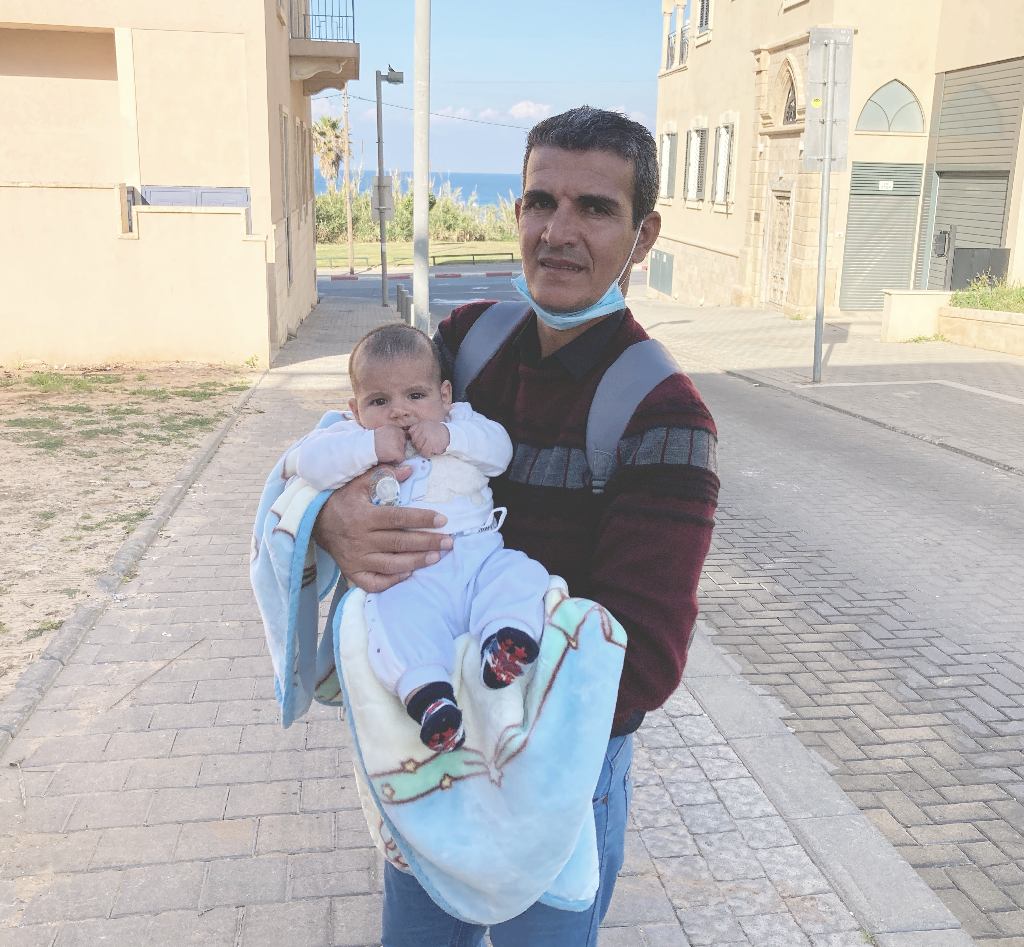 This morning I went to Sheba hospital with Eliyas and his dad.

Arriving at the hospital we immediately found a parking spot and went into the building. Then I had a short video call with my co-worker Georgia, who navigated us to the right place where we then signed in. After that, we went to a small room and were received into it directly.

A very nice woman attached the sensors of the holter monitor to Eliyas and that was it. The monitor will record until tomorrow and then one of us will go and get the results of this electrocardiography.

Comparing this experience to other long days in the hospital, I couldn’t realize that just after an hour and fifty minutes, we were back at our community house in Jaffa, and that included the driving time. So really, this was the quickest appointment I‘ve had during my time at Shevet. 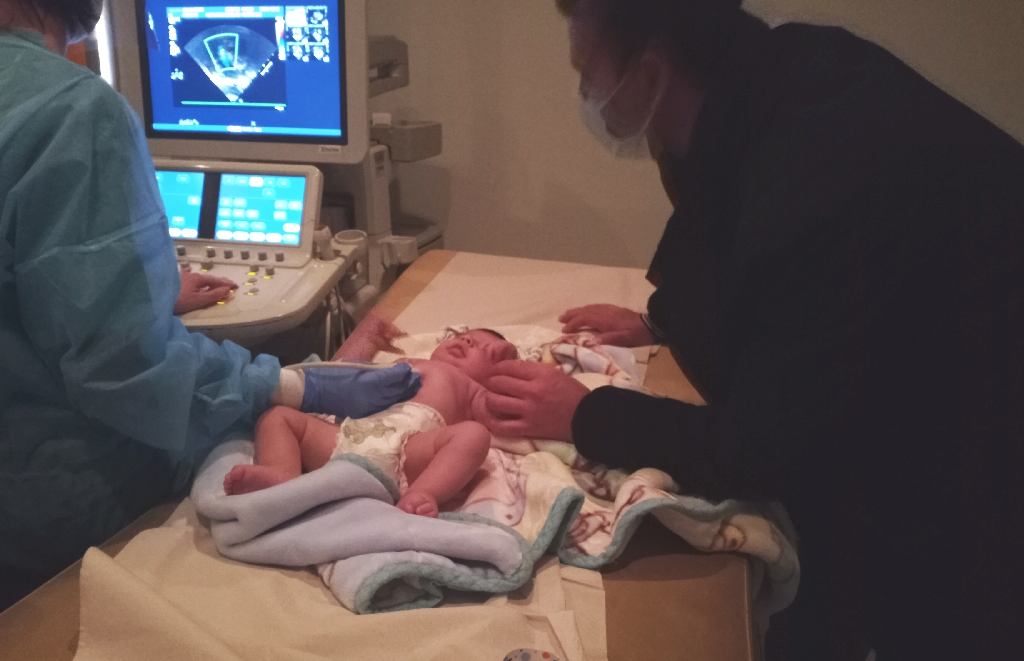 I’ve never seen a months-old infant make it through an Echo without crying even a little bit, but today Eliyas was completely at peace through the whole test, and really ‘peaceful’ is the most accurate word to characterize his whole demeanor.
The Echo showed the amazing surgical results in Eliyas’ heart which exceeded the expectation of the cardiologist. Eliyas will need another Echo in one month and will come for a last Holter-monitor test, but hopefully his next Echo will precede his discharge to Kurdistan!
Hide Comments Show Comments 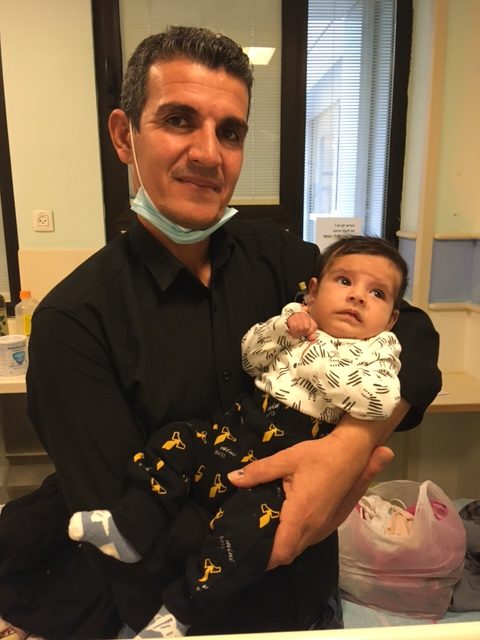 Today was the discharge from Sheba Medical Centre for our lovely Eliyas.

As I came to the waiting station at the hospital, Eliyas’ Father had already packed their things together. Eliyas was dressed to go. But we needed to wait on a discharge report.

The wonderful boy was tired and was crying. The lovely father took his beloved son in the hands to carry him. It was such a beautiful view from the family. I wanted also to carry him. The father was glad to give Eliyas to me. He fell asleep in my arms. So he slept until we left the hospital.

Thank you for all your prayers! The father is so happy to have a blessed and healthy son. 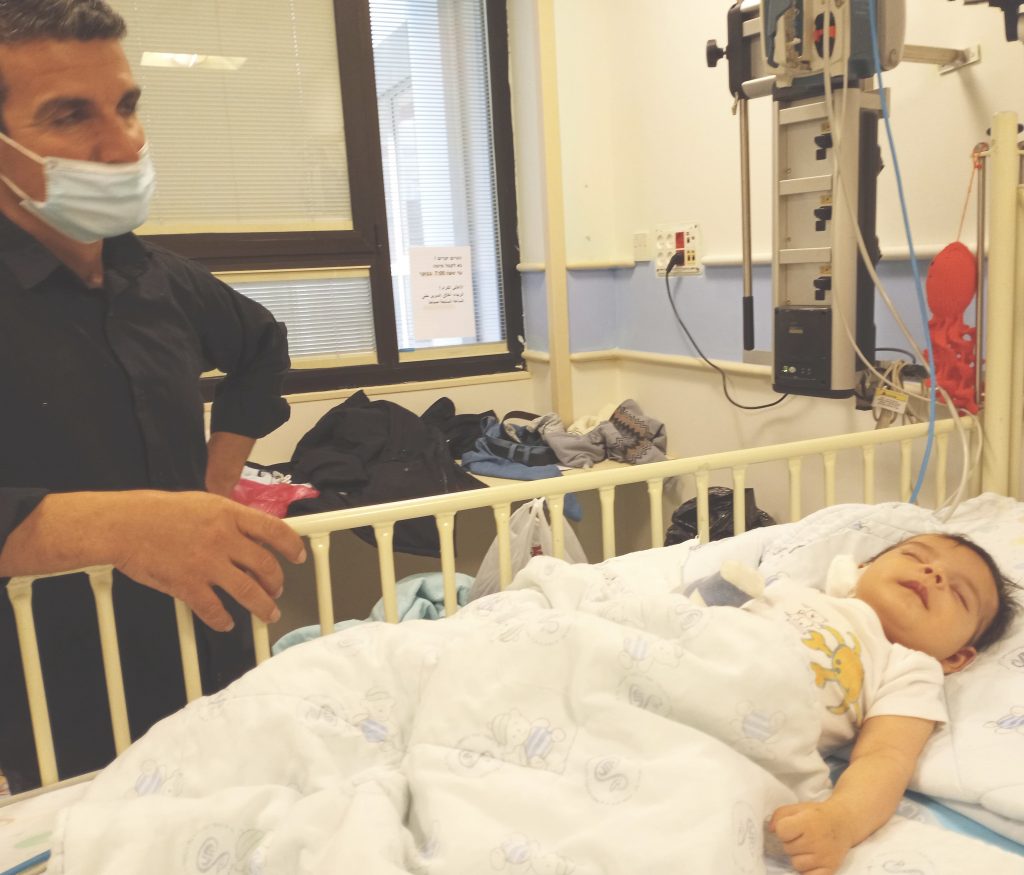 Eliyas’ father’s first words when I went to see him at Sheba Hospital today, was that tomorrow, God willing, they will be discharged to the Jaffa base!

The nurses reiterated this as well, so we are anticipating his return soon! The staff were able to determine the cause of Eliyas’s arrhythmia, and his heart is stable and doing well. His dad proudly pointed to the monitor which showed his son’s stats.

He is looking forward to the Kurdish food that awaits them at our Jaffa house! 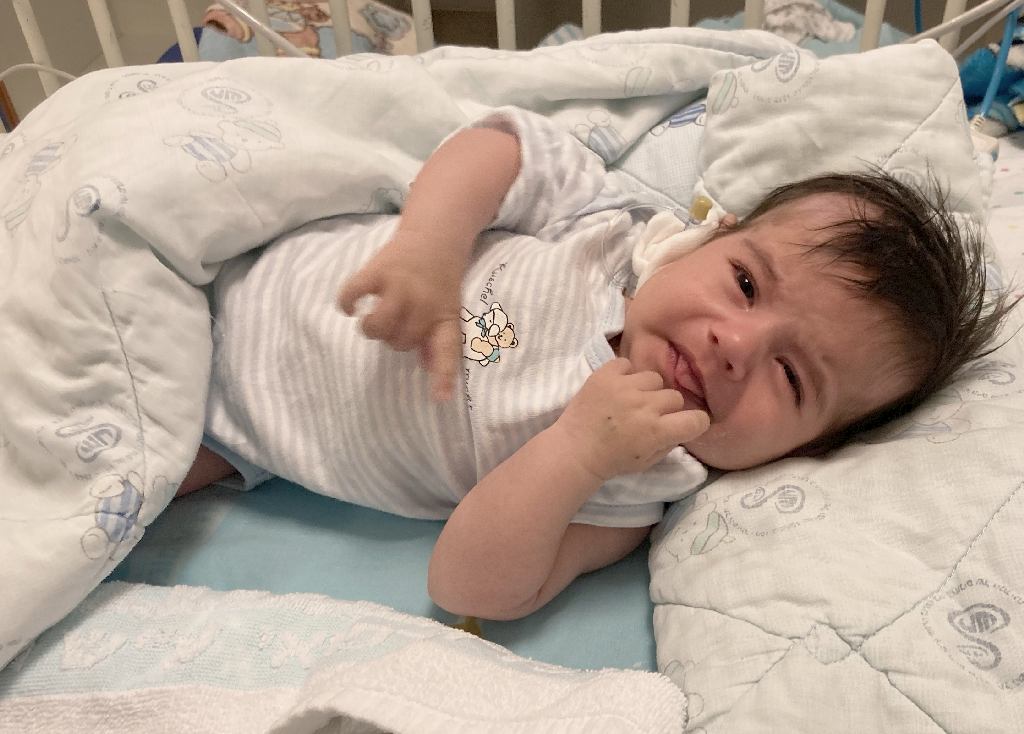 Before entering the hospital room of Eliyas and his dad, I wondered how I can speak with him if I don’t know any Kurdish? Fortunately, in that very moment, he had a friend on the phone who spoke English, so we could talk a little bit.

I came to understand that Eliyas has been crying a lot for the last two days and for the whole previous night, and doctors weren’t sure why. Eventually, it became known that Eliyas has been experiencing arrhythmias, and is going to be wearing a halter monitor now over the next 24 hours to get a good assessment of his condition. In the last night and for now, Eliyas is doing fine again, as you can see in these pictures.

Eliyas’ dad is full of compliments for the staff and the hospital in general. The staff also are all very happy with him being there and think he is a wonderful dad. 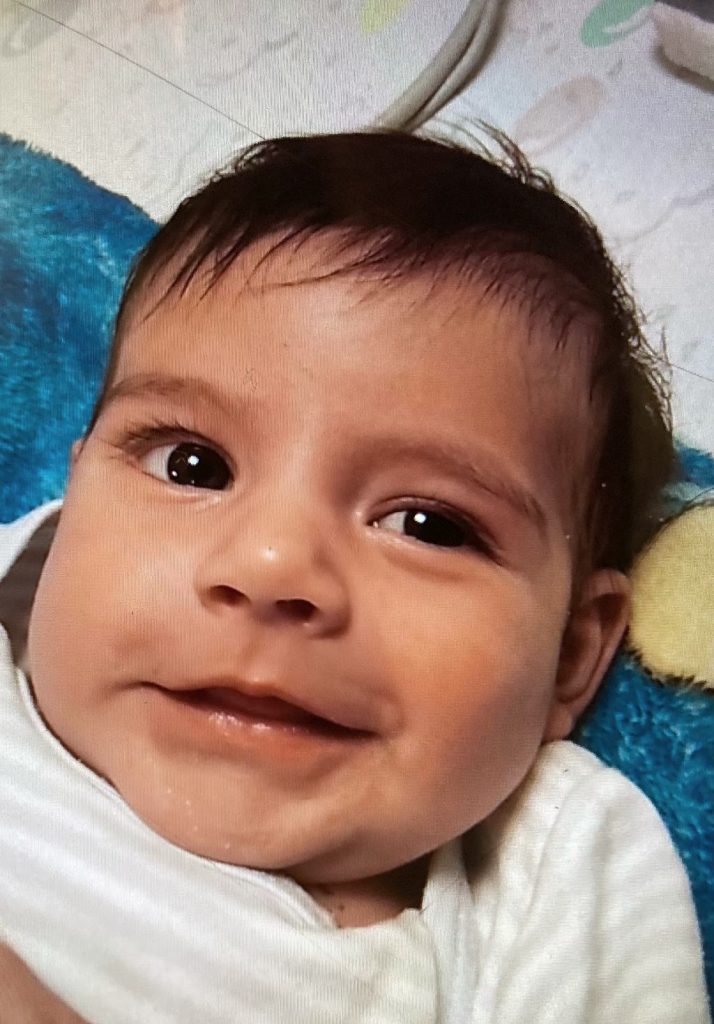 Please pray for little Eliyas, that doctors can help him and also that his oxygen will remain stable now. 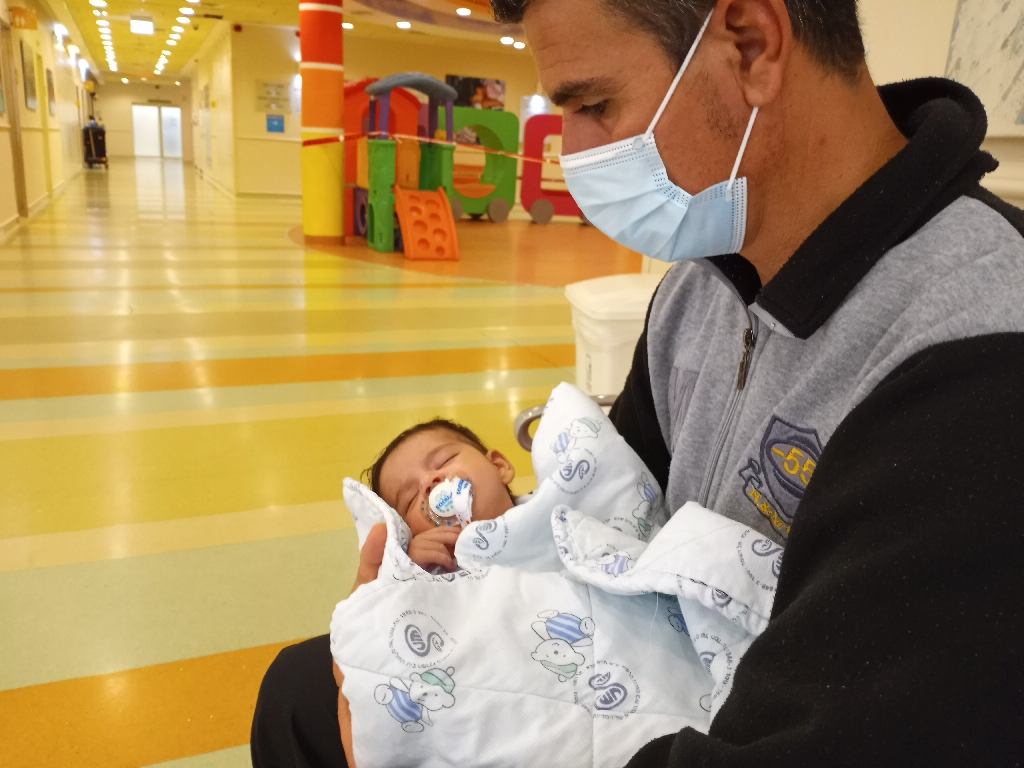 He went for an Inpatient-echo, which showed that his post-surgical heart function looks really good. The cardiologist was very happy with these results. Eliyas’ father was also so excited to hear this news.

Your prayers have been appreciated by this family. 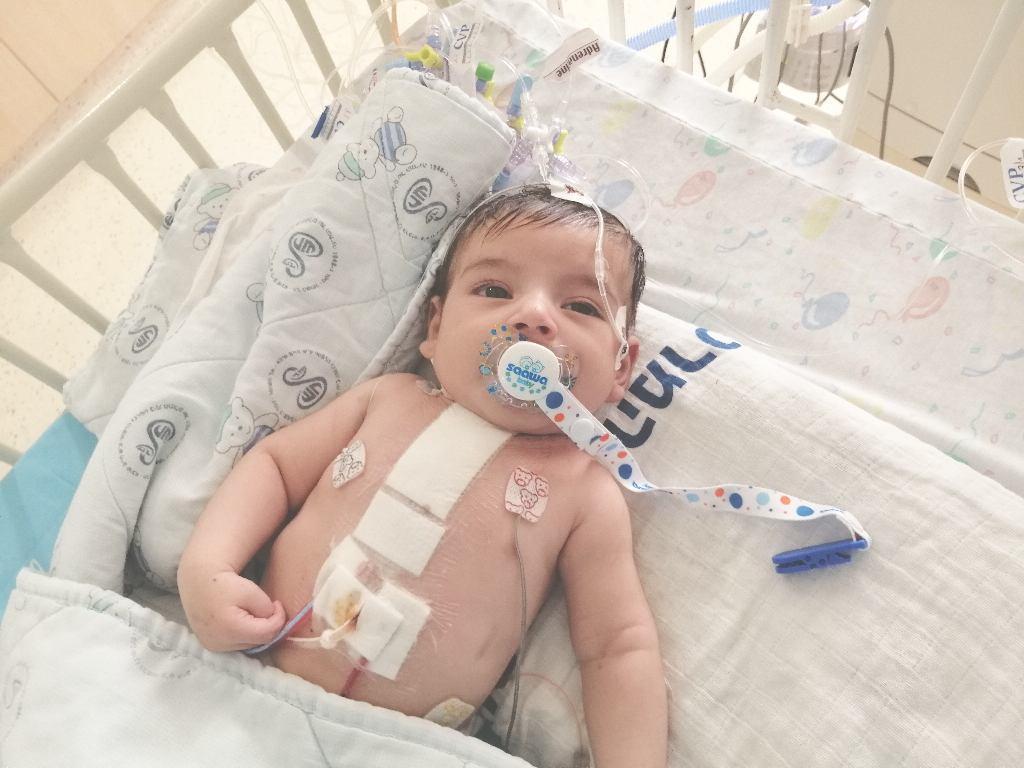 I saw Eliyas with his father today up in the Pediatric Intensive Care Unit of Sheba Medical Center. The doctor was happy to express how pleased he was that they carried out the surgery this week, and that it had been so successful. Eliyas has already been extubated since this morning, and they hoped to reduce some of his medication, and start him drinking milk again this afternoon. 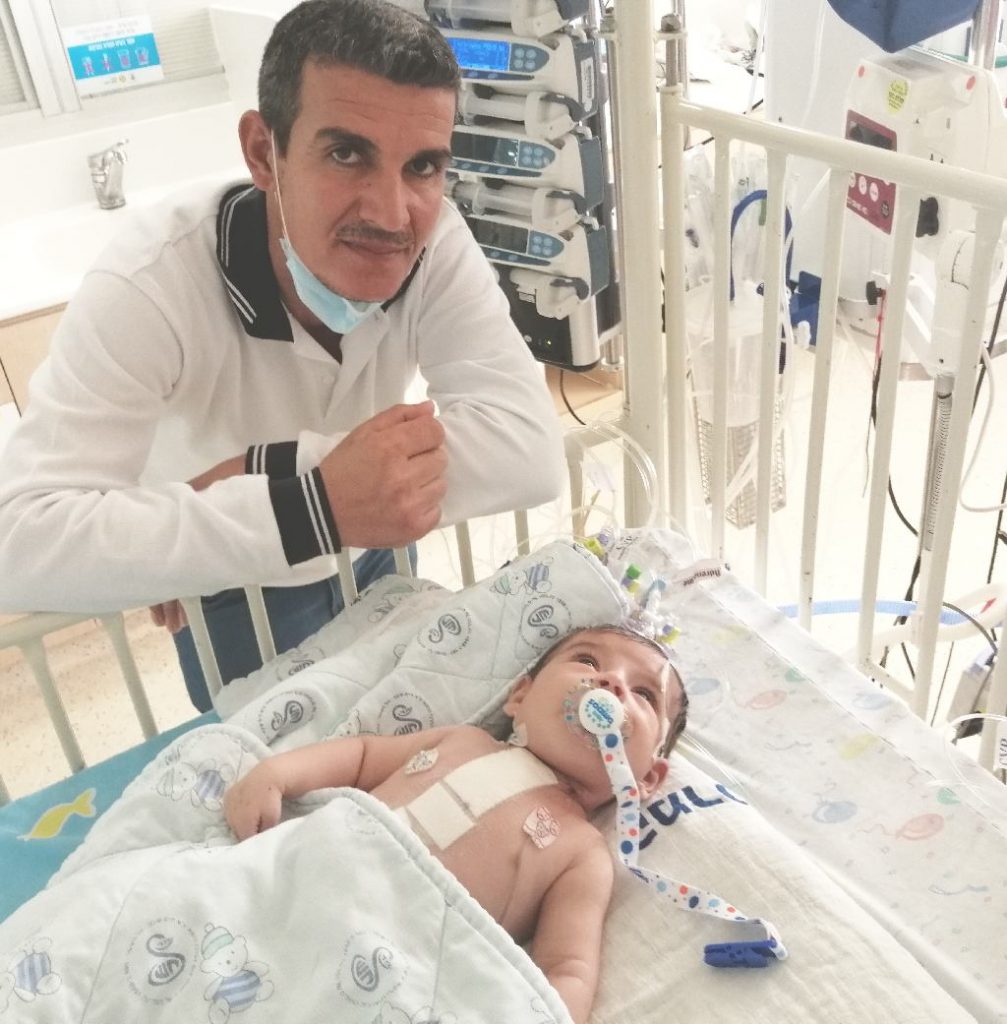 The father of Eliyas was extremely happy of course. He is very polite and thanked everyone who came into his room. It is moving to see his heart of gratitude, which translates into a bright smile on his face.
Thank God for the healing of Eliyas and his kind-hearted father.
Hide Comments Show Comments

It was a surprise change in surgery schedule, which we heard of last night: Eliyas, who had been moved up to the Intensive Care Unit (ICU) during the weekend due to his very low oxygen levels, was going to be taken into surgery this morning. 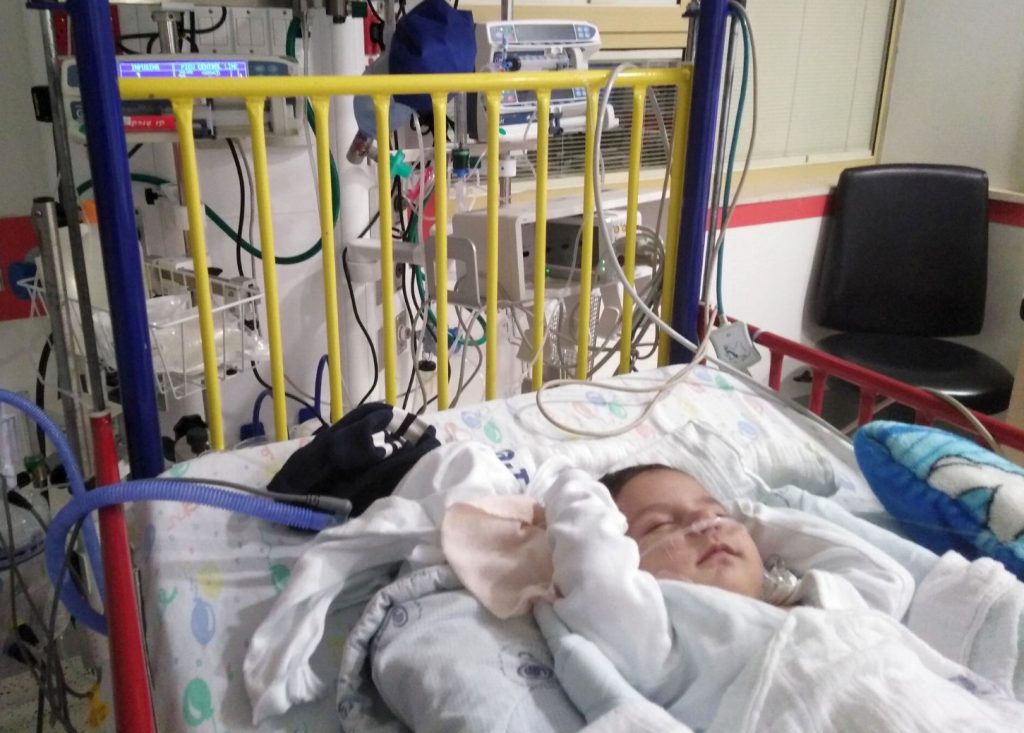 His father had sent a few videos and photos over the weekend, full of adoration for this very cute son, and so it was good to join him early on this morning.

We realised that Eliyas is the first Kurdish baby of 2021 to have heart surgery at the hospital, and it was a big surgery. It took almost seven hours from the time he went into the operating room to the time he was brought out of it. The father waited with strength and patience, although towards the end of the time, he started to pace towards the door of the surgery area, longing for his son to be brought out. 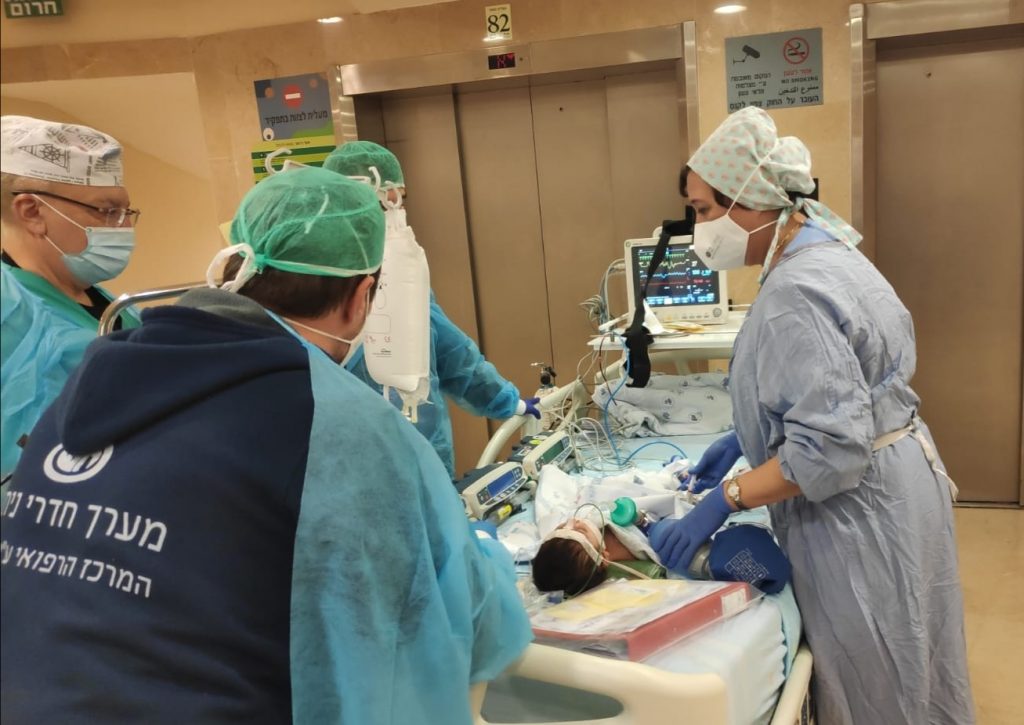 The surgeon told us that it had been a difficult surgery, but thankfully they had been able to do everything which they intended to; the double switch of the Great Arteries, and the closure of two holes in the heart. They also found that a valve which had previously been a concern was working well, and did not need intervention. 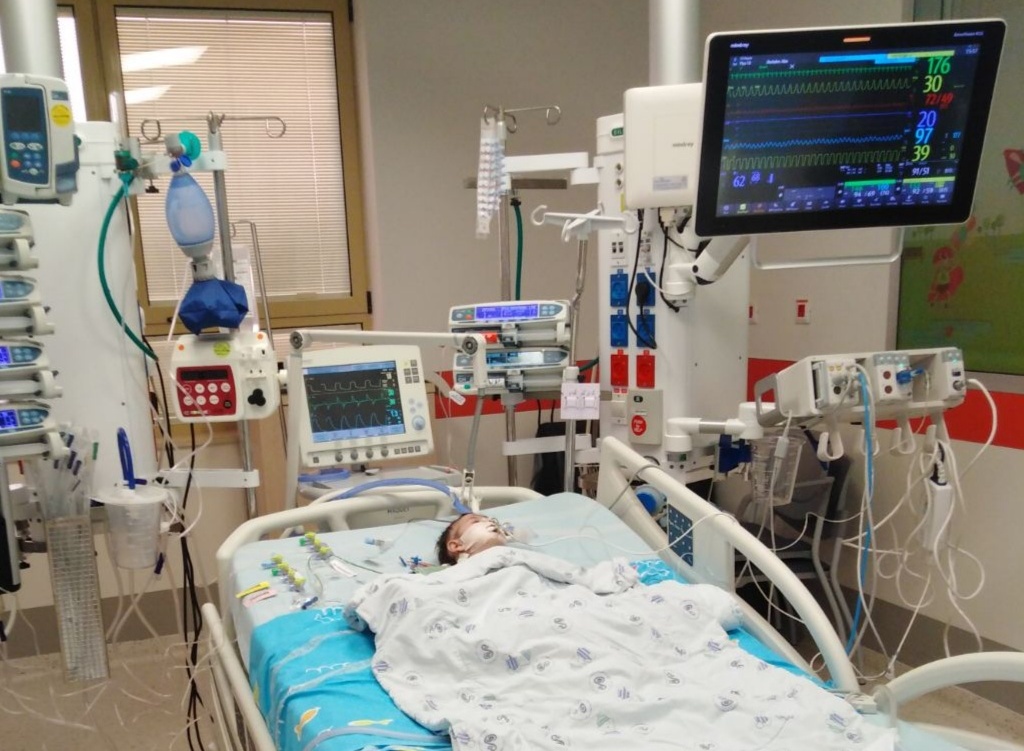 The doctor explained that the next 48 hours will be critical for Eliyas as he recovers from surgery, and his body gets used to the new set up of his heart. 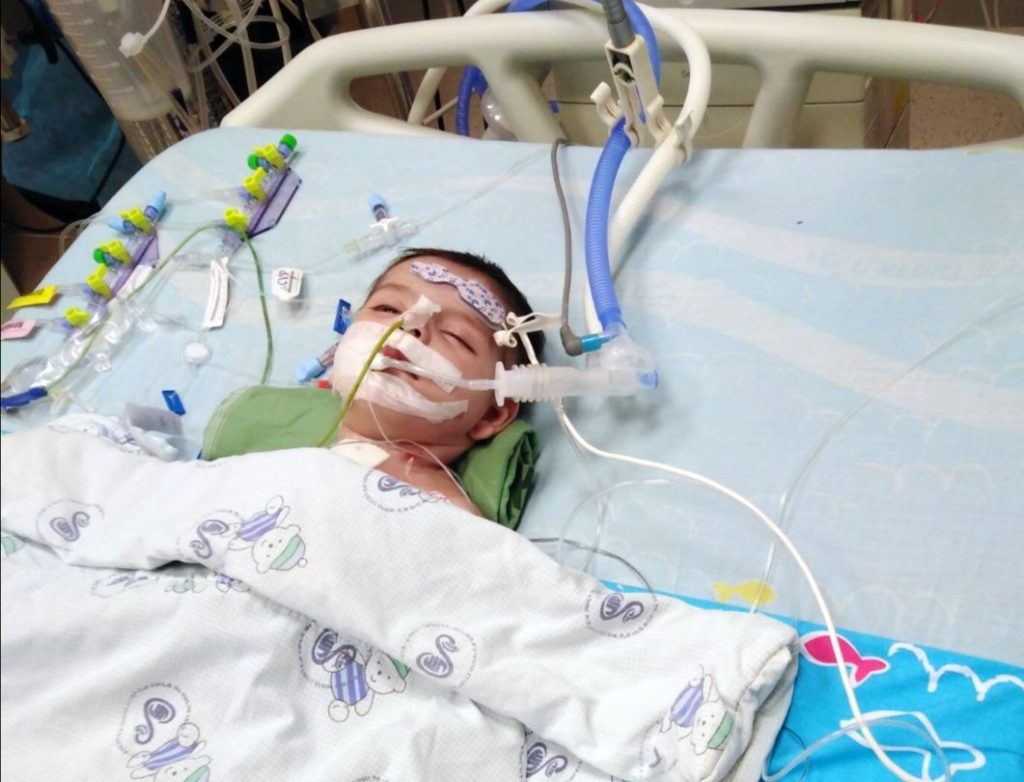 Thank God for the good outcome for Eliyas. Please pray for God will bless the baby with healing and continue to strengthen the father, giving him a light spirit. 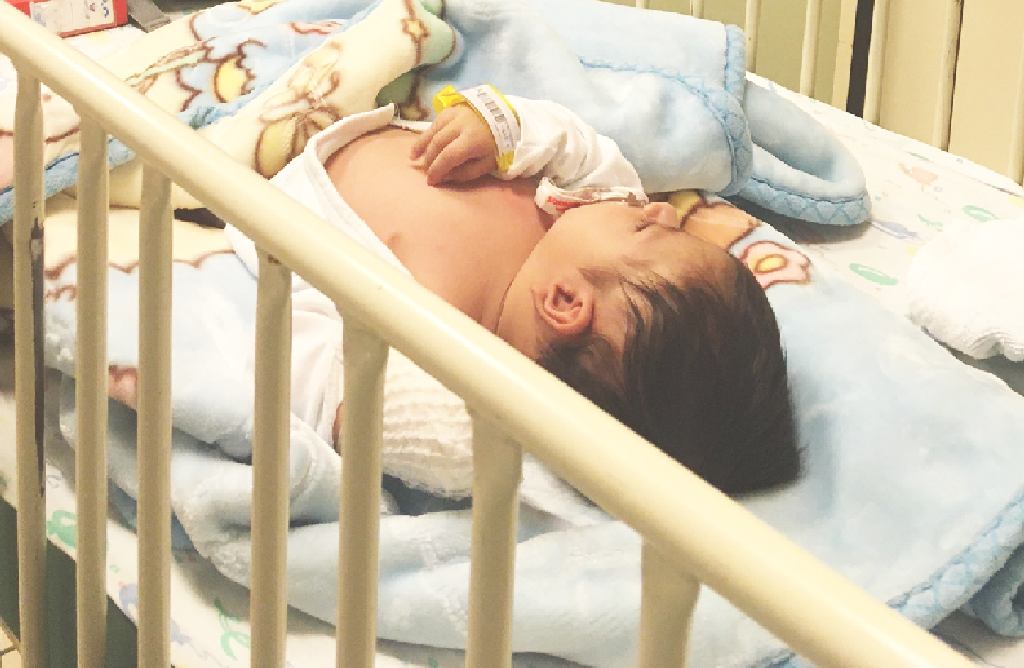 Our lovely Eliyas fasted today for his catheterization. The whole procedure took almost three hours. His father was waiting so much for his return. After the catheterization was finished the precious little boy was still sleeping. After the intervention he needed a lot of oxygen. This showed that his long pressure was high but they will still be able to perform his surgery in the next few weeks. He may have a CT scan and some assessments beforehand. 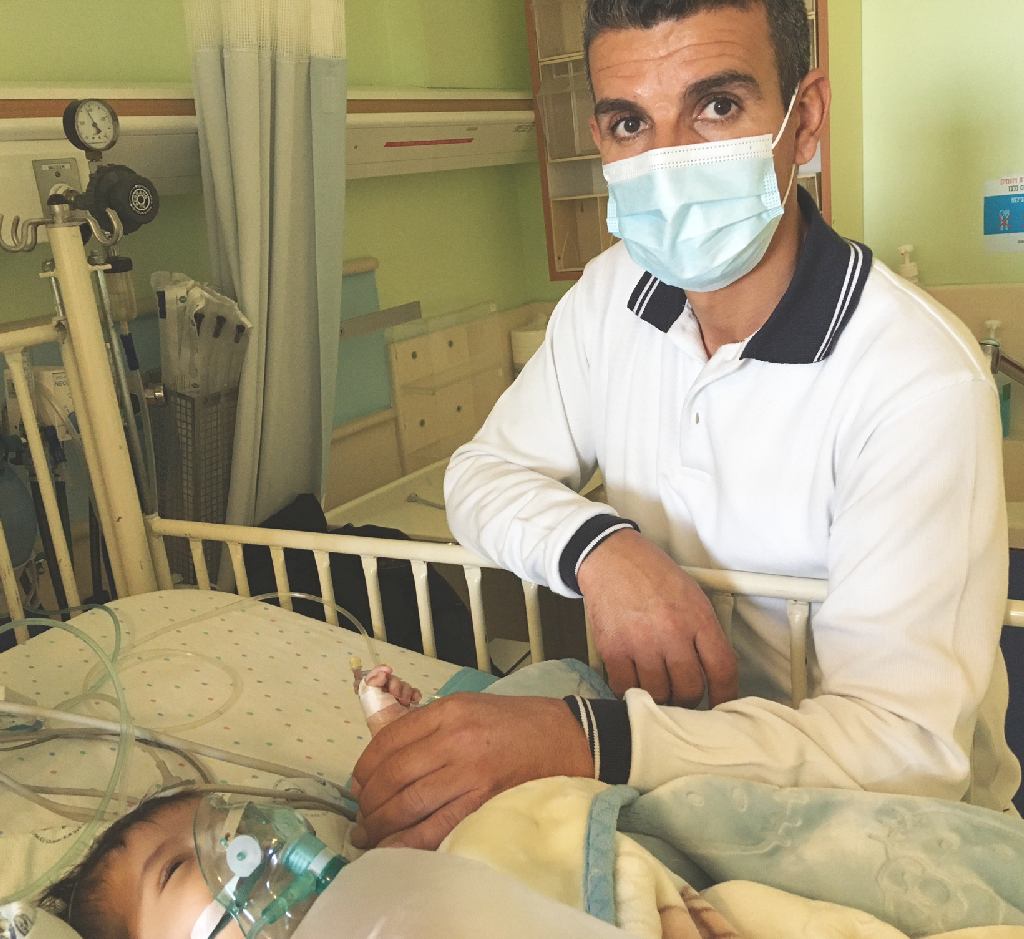 Hopefully he can be discharged tomorrow if there aren’t any complications. After a very long catheterization procedure, Eliyas’s father was so happy that he could finally see his beloved son. He was by his side all the time. Thank you for keeping little Eliyas in your prayers.
Hide Comments Show Comments 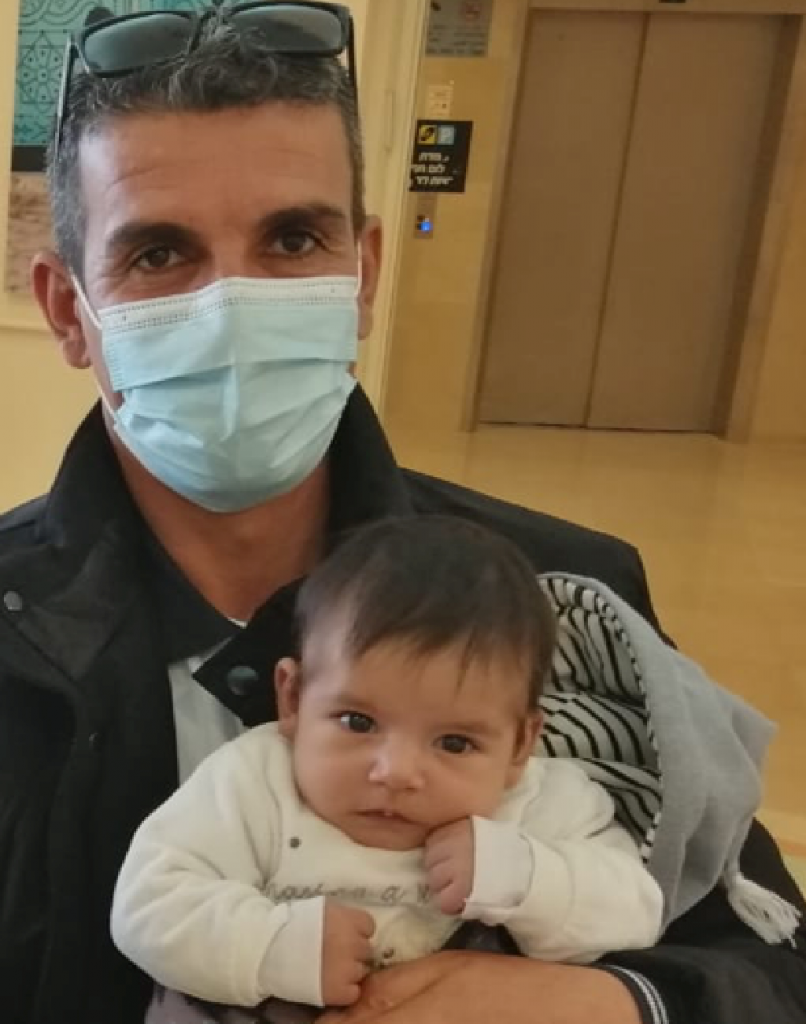 Eliyas had a day at Sheba hospital today, ahead of a catheterization tomorrow.

The small Eliyas is so peaceful. He let the medical personnel do everything with him. Eliyas was admitted today and his father was very thankful for the help he received.

Eliyas’s oxygen levels were very low today. Tomorrow morning he will have his catheterization, followed by a test to measure the pressure in his lungs. He has had a catheterization before in Kurdistan, and surprised all of us with the information that this was done without anesthesia! 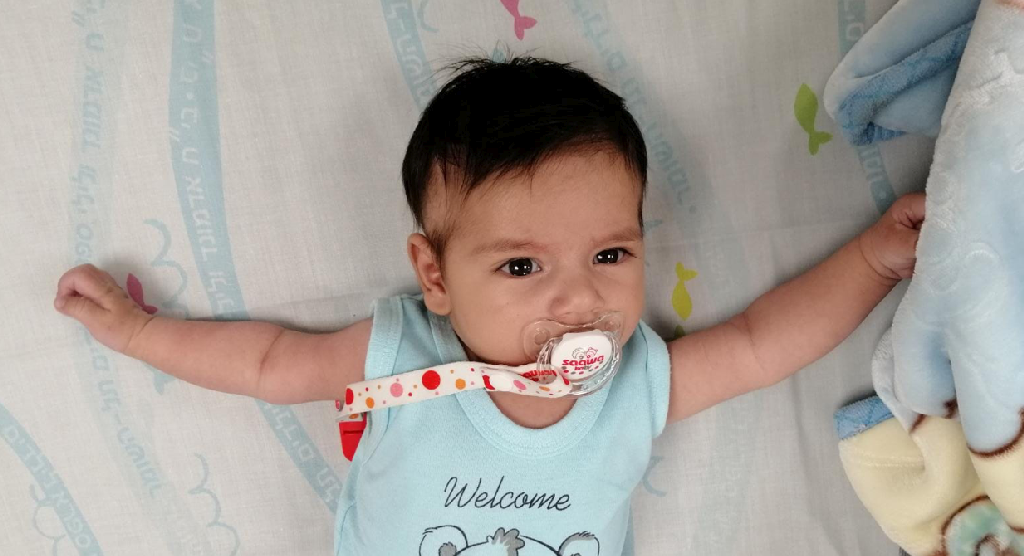 We hope it will go well tomorrow, and he will get a surgery to help him get well soon. 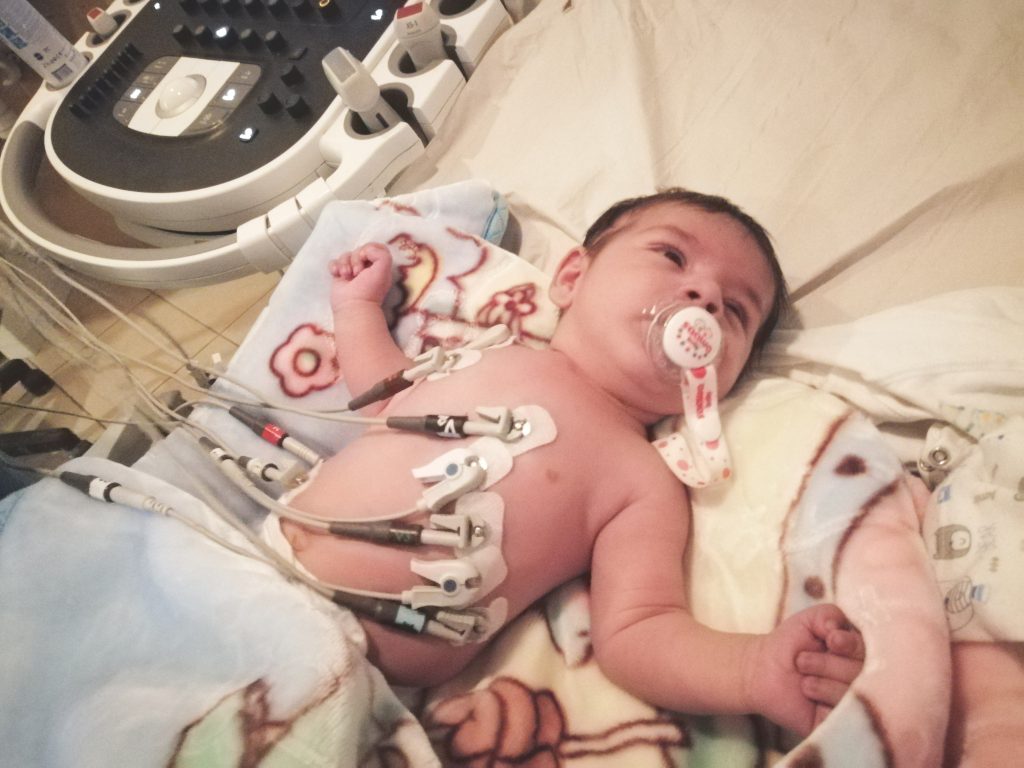 Eliyas, at two months old, has successfully charmed each person who set their eyes on him today at the hospital. He has his first appointment which he attended with his very caring father.

Eliyas has two older siblings back in Kurdistan, and it was nice to see a few photos of them. Eliyas is a very lovely baby and very relaxed and smiley. He had the full range of tests today; Echo, ECG, blood test and X-ray, handling them all beautifully and generally happily. The cardiologist loved him, and said that her diagnosis for him was “cute!” 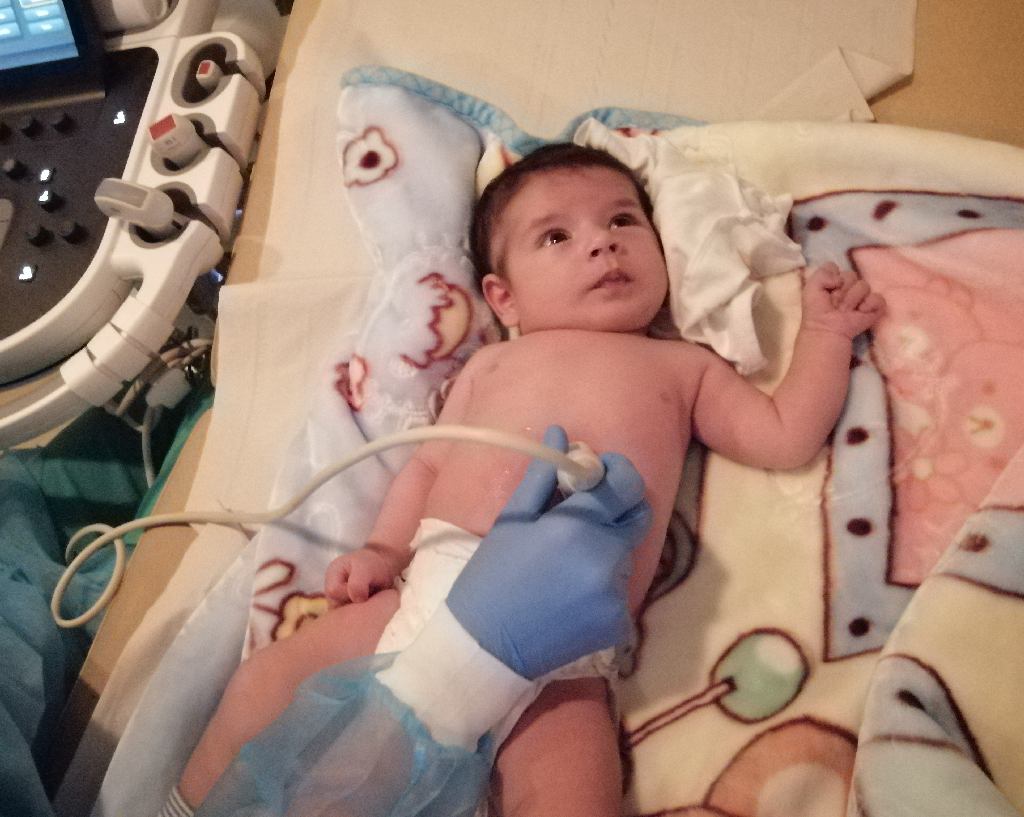 She also confirmed the diagnosis of TGA from Kurdistan, and also pointed out that he has a large and abnormal pulmonary valve. This could affect their plan for his surgery. His condition will be discussed with the medical team, and they will make a plan for his surgery. Thank you for praying for this happy boy!
Hide Comments Show Comments 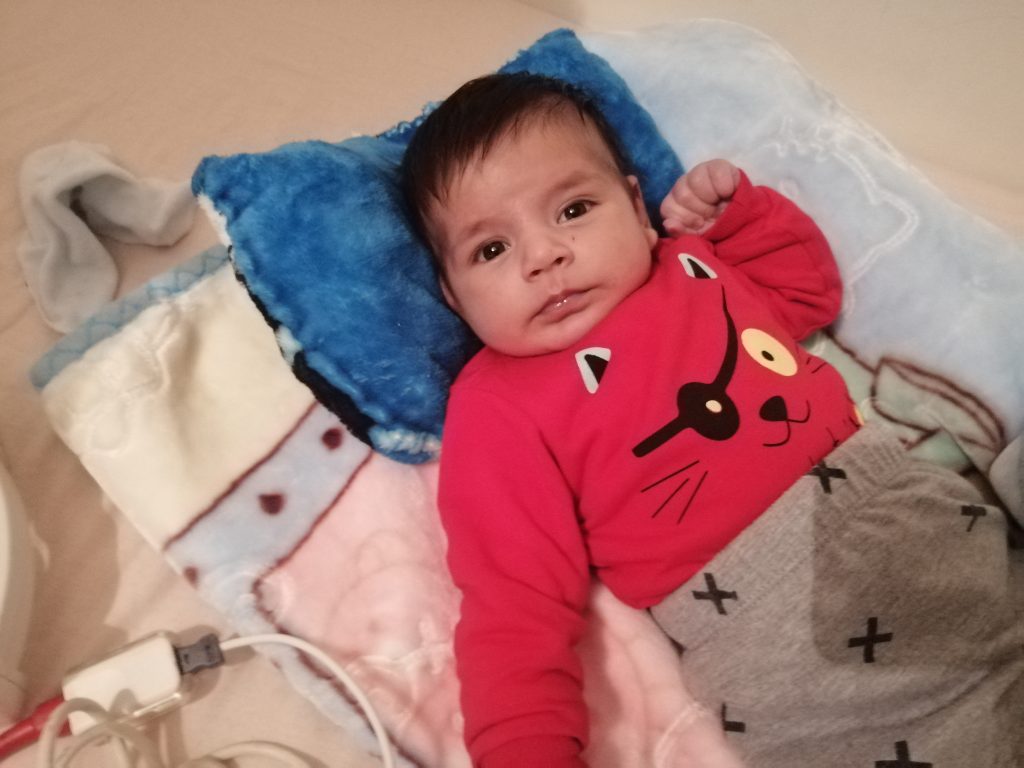 Eliyas and his father travelled to Israel with four other Kurdish families, arriving last night. He is almost 2 months old, and has a diagnosis of dextra-Transposition of the Great Arteries (D-TGA). Thankfully he has already had a catheterisation in Kurdistan, which made a small hole in his heart helping him to have more oxygen around his body. However, his oxygen levels are still fairly low; his dad says sometimes in Kurdistan it can be 65%! He needed to have oxygen on the flight, but thankfully by the time he arrived with us last night, his oxygen levels had stabilised and they were both able to rest well. Eliyas will have his first appointment at the hospital on Thursday.
Hide Comments Show Comments 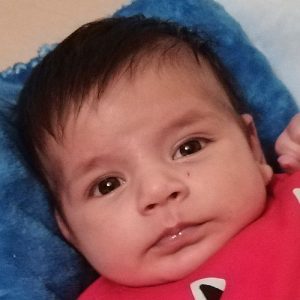 Eliyas is a two month old child from Kurdistan, diagnosed with Dextro-Transposition of the Great Arteries.

Eliyas does not yet have a local leader to advocate for prayer and financial support for his surgery.

As of right now, Eliyas still needs $7000 toward surgery and related expenses.