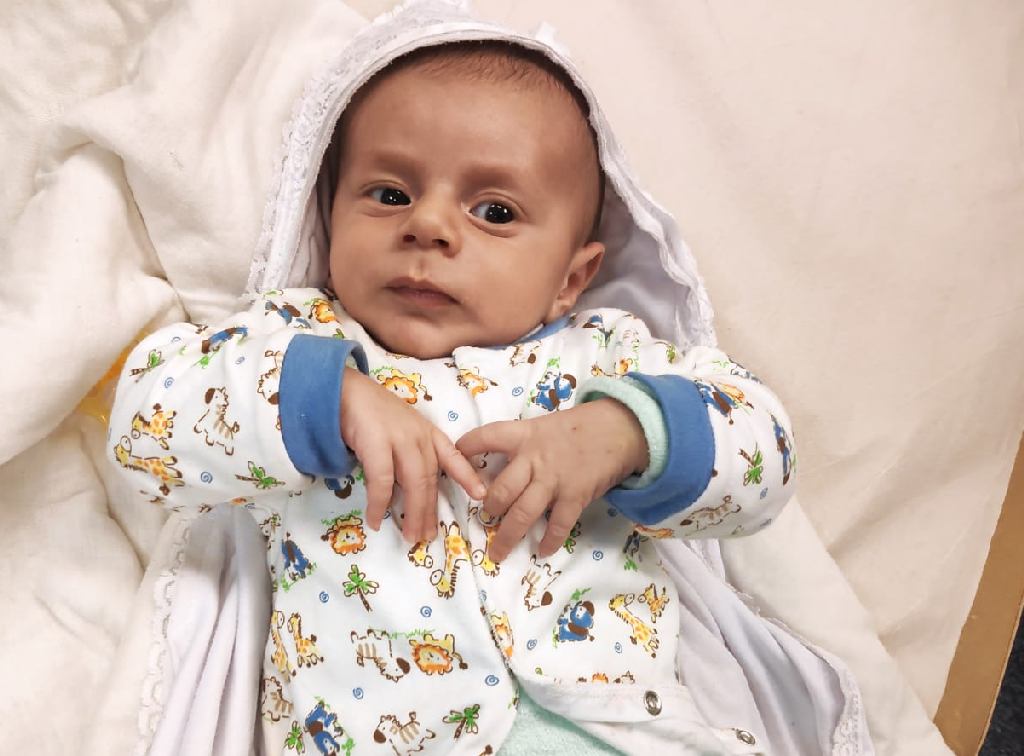 Today, Malik had his final Echocardiogram at Sheba Medical Center. His mom, being a little bit worried with navigating life in hospital for the first time, was now quite confident and went to the Echo on her own. The Echo results were fine. The last thing for them to do for Malik was to receive an injection. 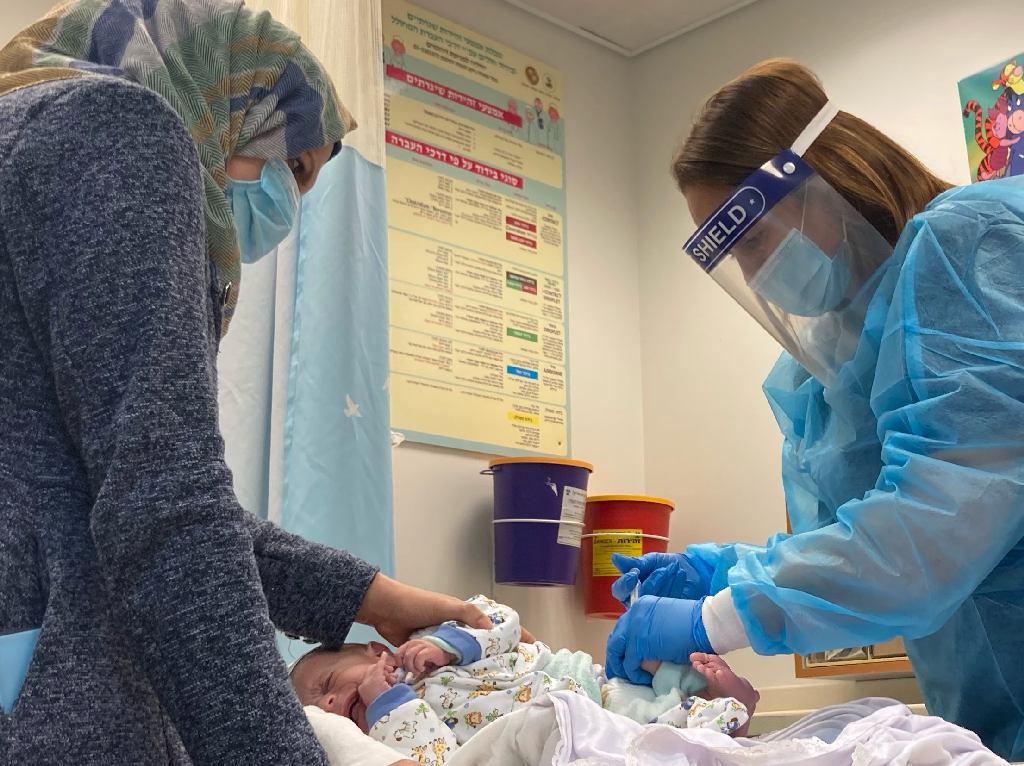 After a time of waiting with the other moms, Malik did a great job with receiving an injection. He was really quiet and calm. He just cried a little bit in the moment of the injection and then it was time to go home. 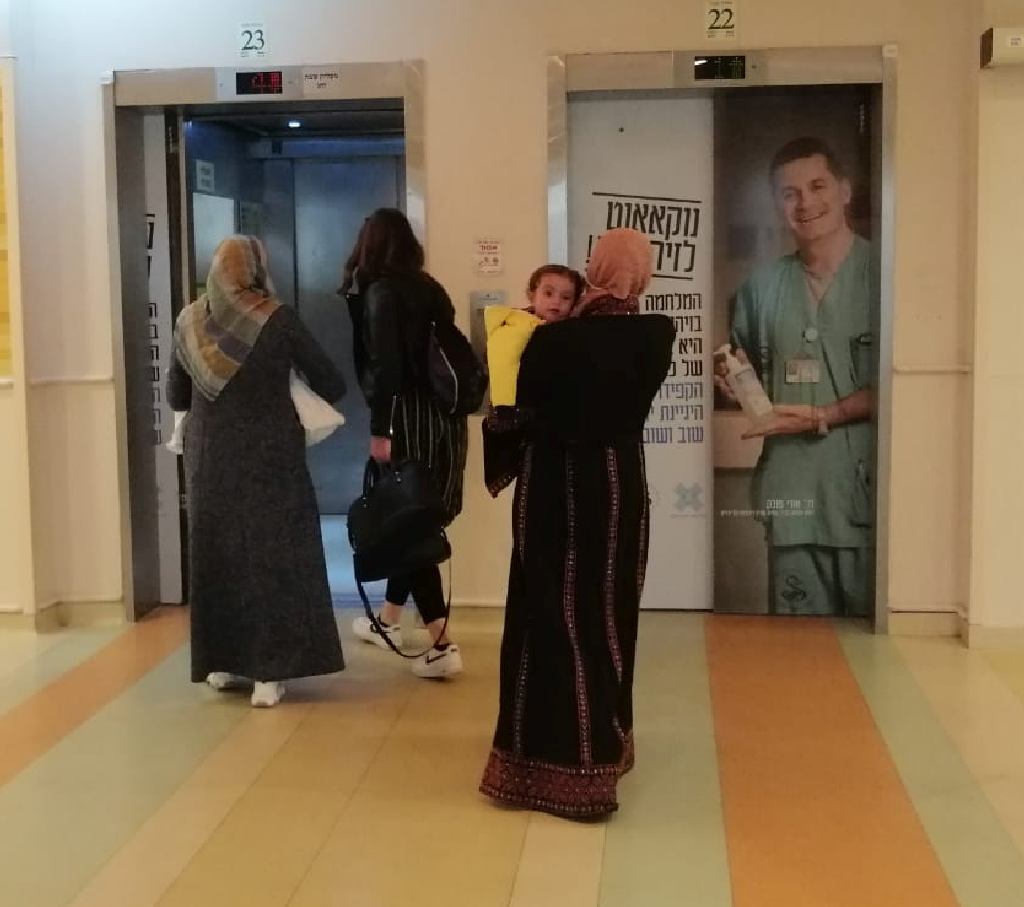 Back in our house in Jaffa, we collected Malik and his mother’s bags, said our goodbyes, and drove back to the Gaza border crossing. 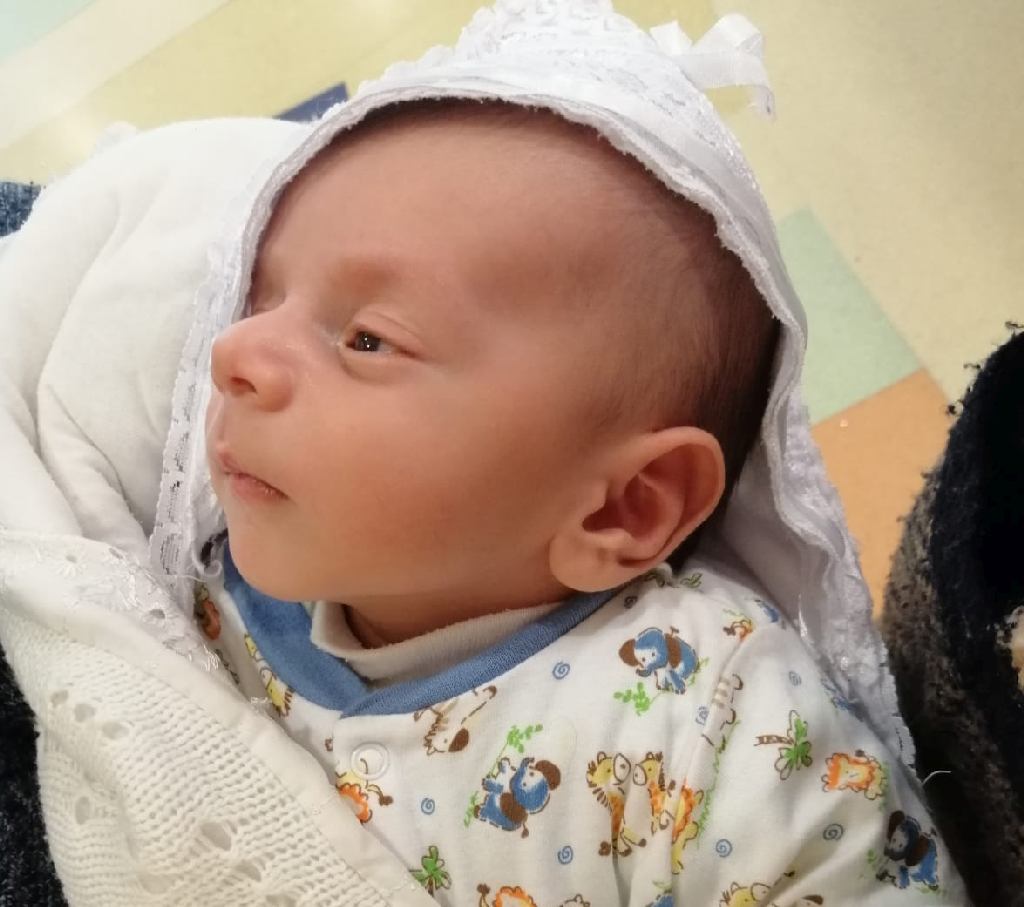 Thank God that Malik’s treatments worked out so well as did his recovery. Including his surgery time, both Malik and his mom have been here since Christmas Day and are now able to leave for home,  praise the Lord! Thank you all for your prayers. 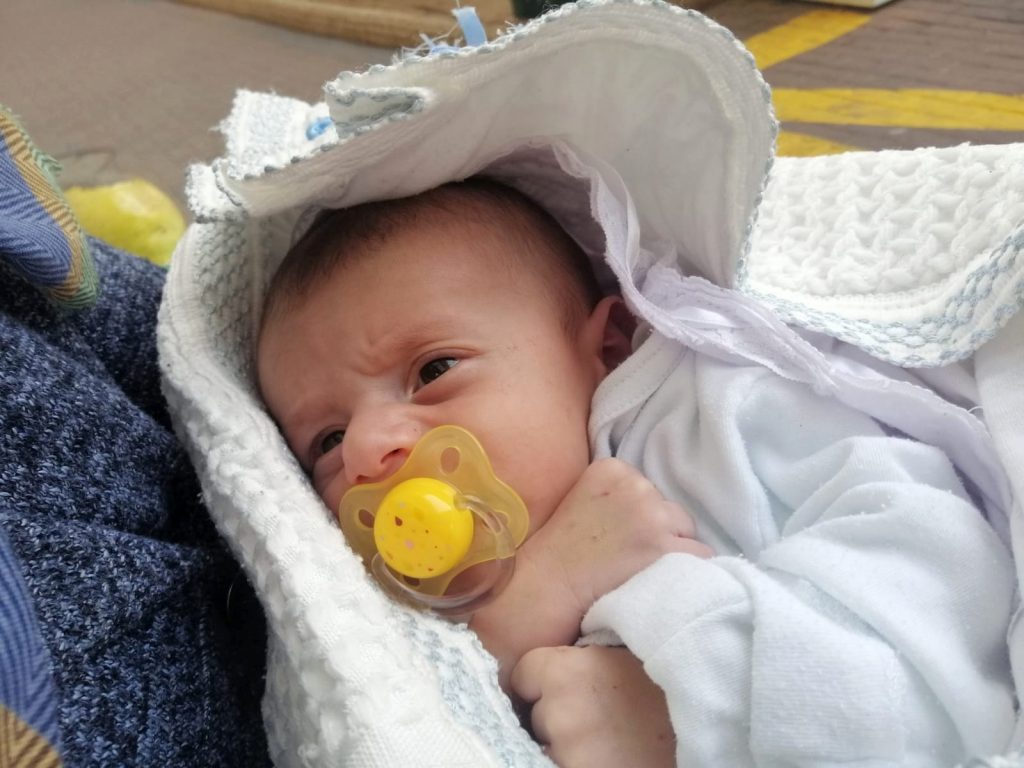 Baby Malik was discharged to our house on the Jaffa coast today. He’s a really sweet and calm boy and his mother is getting more peaceful with the whole situation.

When Malik and his mother arrived at our house in Jaffa we had a small farewell party for one of our Kurdish children (Drood) who can return back to Kurdistan tomorrow. Malik was so peaceful and quiet during the whole party that you almost could’ve forget that he was there. You realised it just by looking at his mother who was holding him in her arms while eating cake.

Malik needs to come back to the hospital in the next week for an echocardiogram. Hopefully the outcome of it will be good so that he and his mother are able to return back home where their family awaits them. 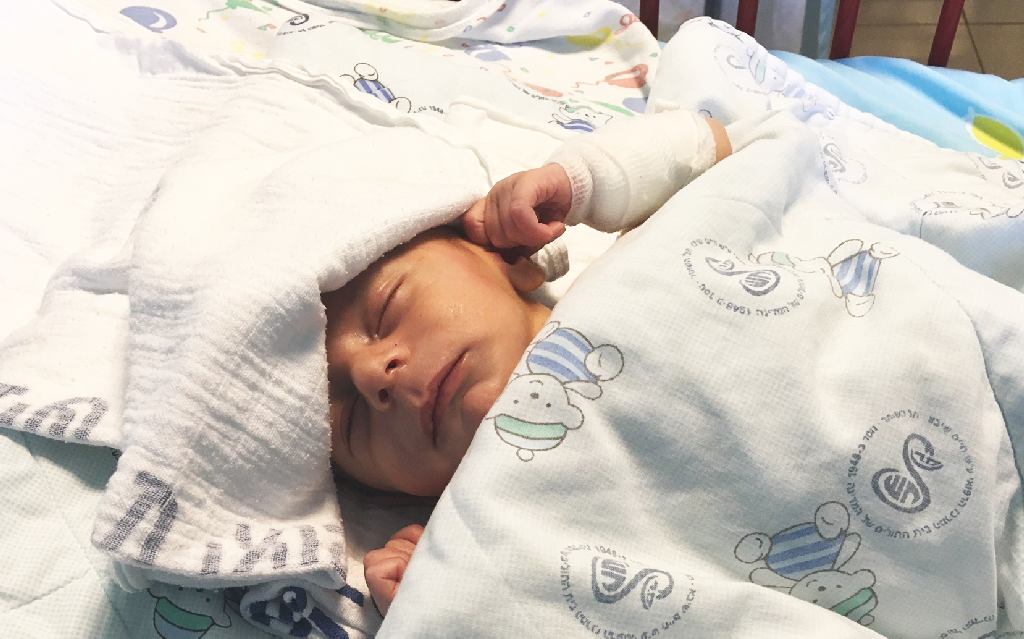 I visited Malik today at Sheba Medical Center’s Pediatric ICU on the fourth floor, he was moved there in the afternoon. He was peacefully sleeping when I came in. His vital signs were very good. Thank you for all your prayers for this little one and for his mother. 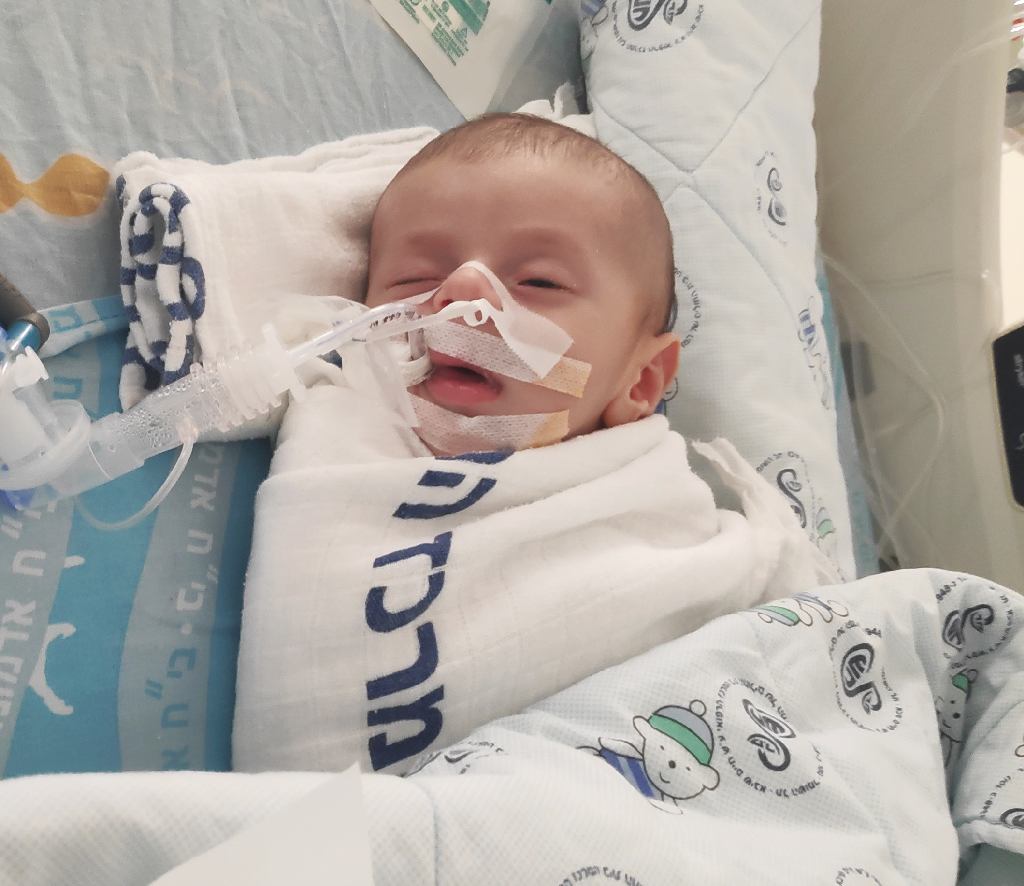 When I went to the ICU at the Sheba Medical Center today to visit Malik and his mother after yesterday’s surgery  she told me that he is doing “quaiez,” which in Arabic, means good. Thanks to the lord.

The mother of Malik seemed quite stressed about being in the hospital and didn’t feel very comfortable about it. So your prayers for a good recovery for Malik are appreciated and also for his mother to be at peace about staying in hospital and about any other circumstances within the whole situation that are difficult for her.
Hide Comments Show Comments 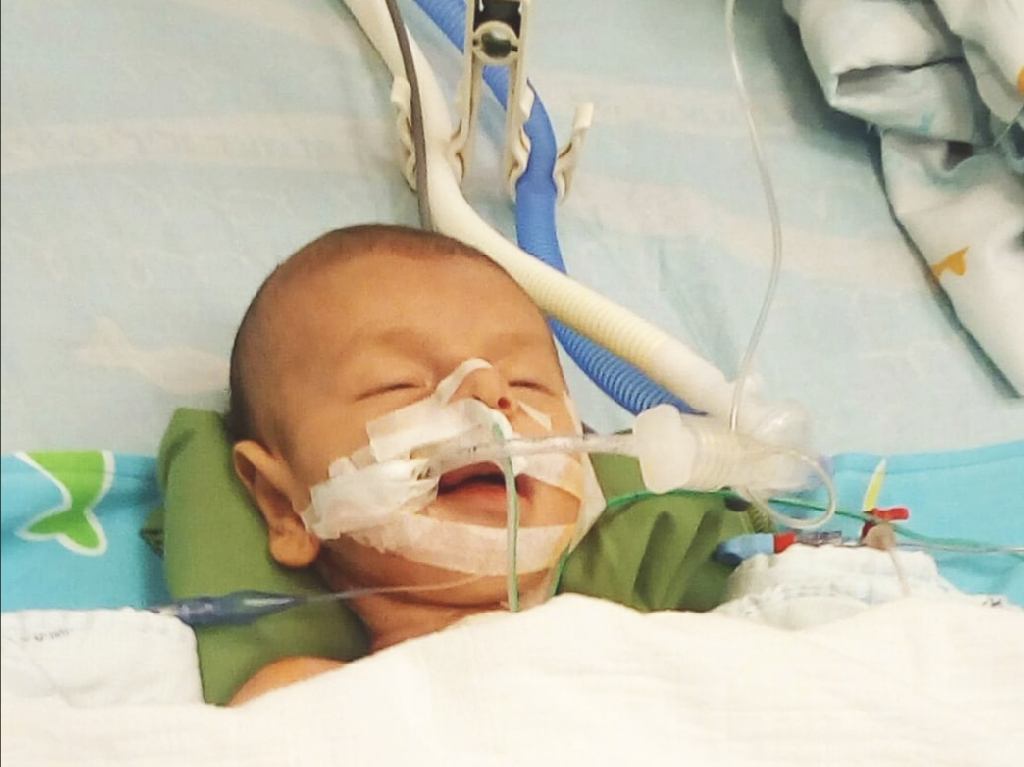 At Sheba Hospital today, I had the opportunity to spend time with a young mother from Gaza, while waiting for her baby to come out from his operation. How can you be any help in a situation like this, you may wonder, and I asked myself those words today. The language barrier made it impossible for us to communicate. She speaks Arabic, and I speak English. But I sat together with her in the waiting room, patiently waiting for her son to come to the Childrens’ ICU. Hopefully it gave her some peace, at least I hope so.
When we finally could see him, her joy was my joy. I loved seeing her start to relax while listening to the words of the nurse who was kind enough to give me a short version after giving the mother the comforting information. We were told that Malik is fine. It was a normal operation. Everything looks okay. Malik is taking medicine into his veins, but it will take a while before he wakes up. Malik’s mother was happy, I was happy, and I’m sure the doctors who performed the operation were also happy. Every single life is precious. So precious.
Please lift up this little baby in your prayers, but also his family and the medical staff who is taking care of him.
Hide Comments Show Comments 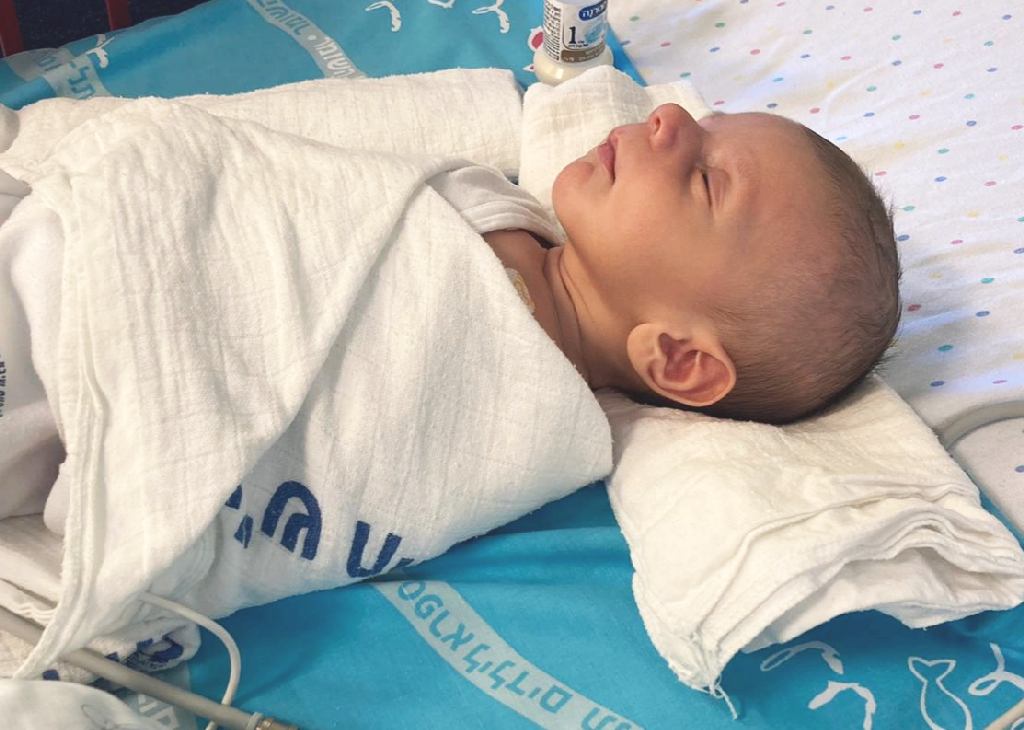 Malik arrived at Sheba hospital on Christmas Day! I have met him briefly before, as he was originally admitted to another hospital, who shortly after his arrival, found they were unable to accommodate him. Malik had returned to Gaza, without any intervention to wait for his appointment to be re-scheduled, but his condition deteriorated, and by Christmas Eve, he was in the hospital in Gaza on oxygen. Our Gaza coordinator Amar pressed forwards with Malik’s case, not content with leaving him in a dangerous condition in Gaza, until we received the answer from Sheba Hospital. Thankfully, they accepted little Malik.
Malik and his young mum traveled via ambulance out of Gaza and into Sheba hospital. His condition is not as bad as we had heard, and he is now stable in the intermediate ICU, waiting for the doctors to make a plan for his surgery.
Hide Comments Show Comments 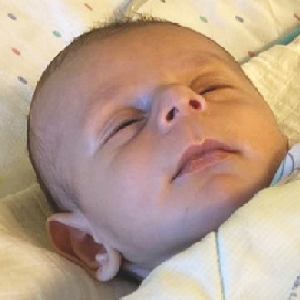 Malik is a month old child from the Gaza Strip, diagnosed with a congenital heart defect.

Malik does not yet have a local leader to advocate for prayer and financial support for his surgery.

As of right now, Malik still needs $6000 toward surgery and related expenses.