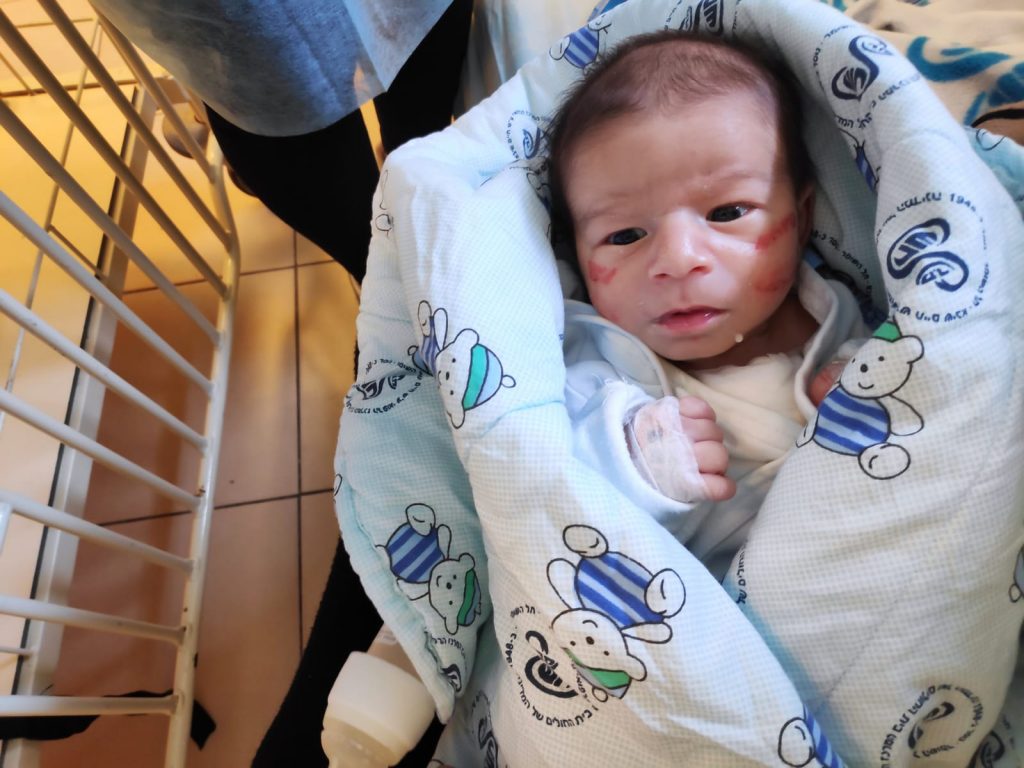 After what seems like a very short time, Mr. Mohammed has been discharged today from Sheba Medical Center home to Gaza. Thank God that his heart defect was diagnosed and treated so quickly and successfully.
Its been a short time, but full of blessings. Mohammed’s mother has been able to spend time with her own father, which is not usually possible for them to do as he lives in Israel. 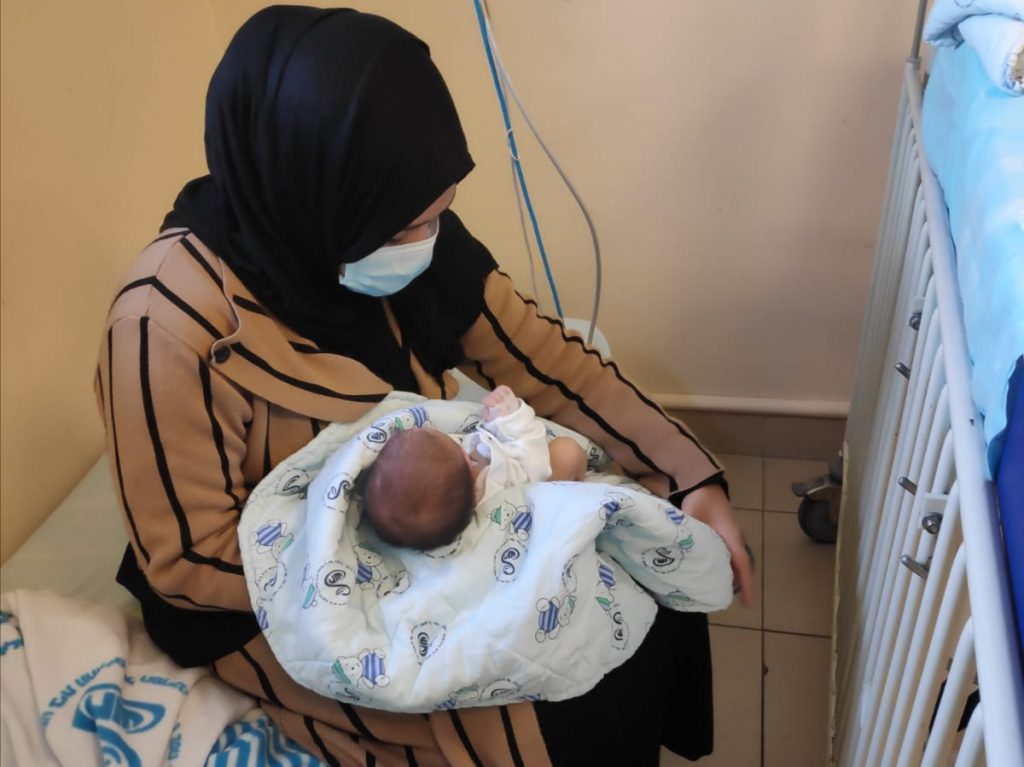 Mohammed and his mum travelled back to the Erez Border this evening, and we expect to see them again in about a month for a follow-up appointment.
Hide Comments Show Comments 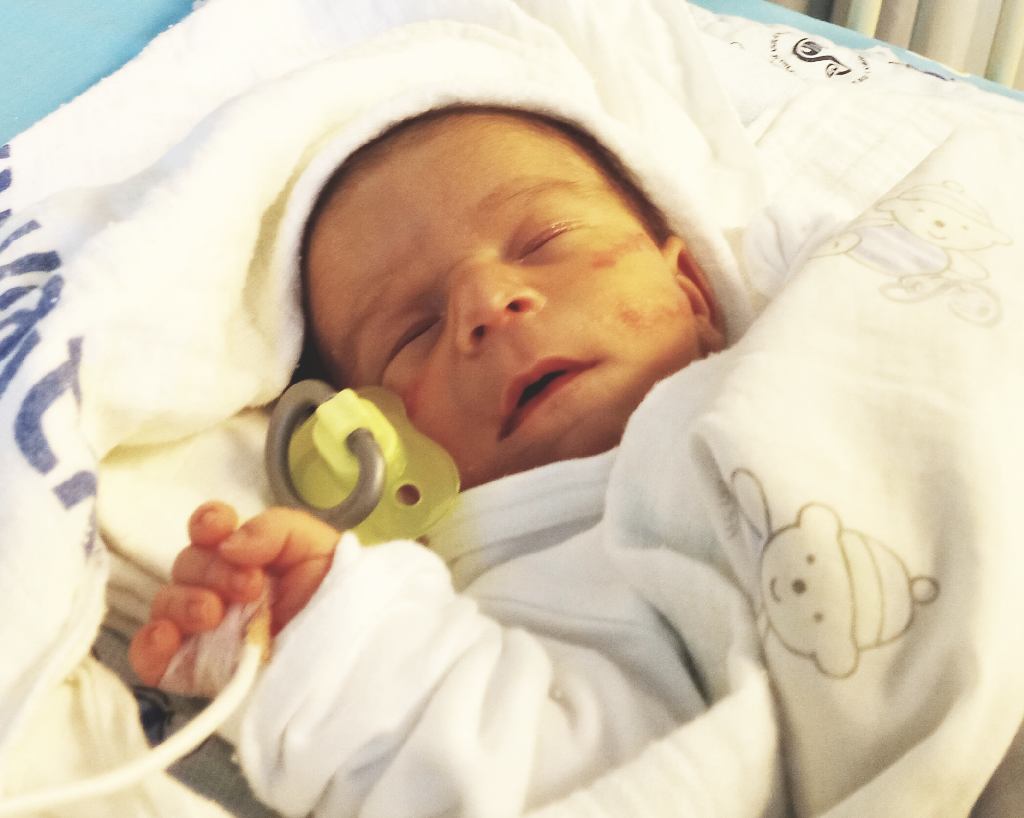 This afternoon, co-worker Georgia and I sat with the mother and grandfather of  little Mohammed. This sweet boy has been extubated and moved to the Pediatric Secondary ICU at Sheba Hospital, after his surgery last Tuesday.
His mom and grandpa offered both of us Palestinian food today as we talked a little bit about our backgrounds. We learned that Mohammed’s mother has studied law at university, and though she lives in Gaza, Mohammed’s grandpa lives in Israel. This was a special day for him as well because he was able see his new grandson as visitors are allowed in the Secondary Pediatric ICU.
Please pray for Mohammed’s recovery as he improves day by day. Thank you God for this little boy, whom you brought through urgent surgery and whose life you are sustaining.
Hide Comments Show Comments 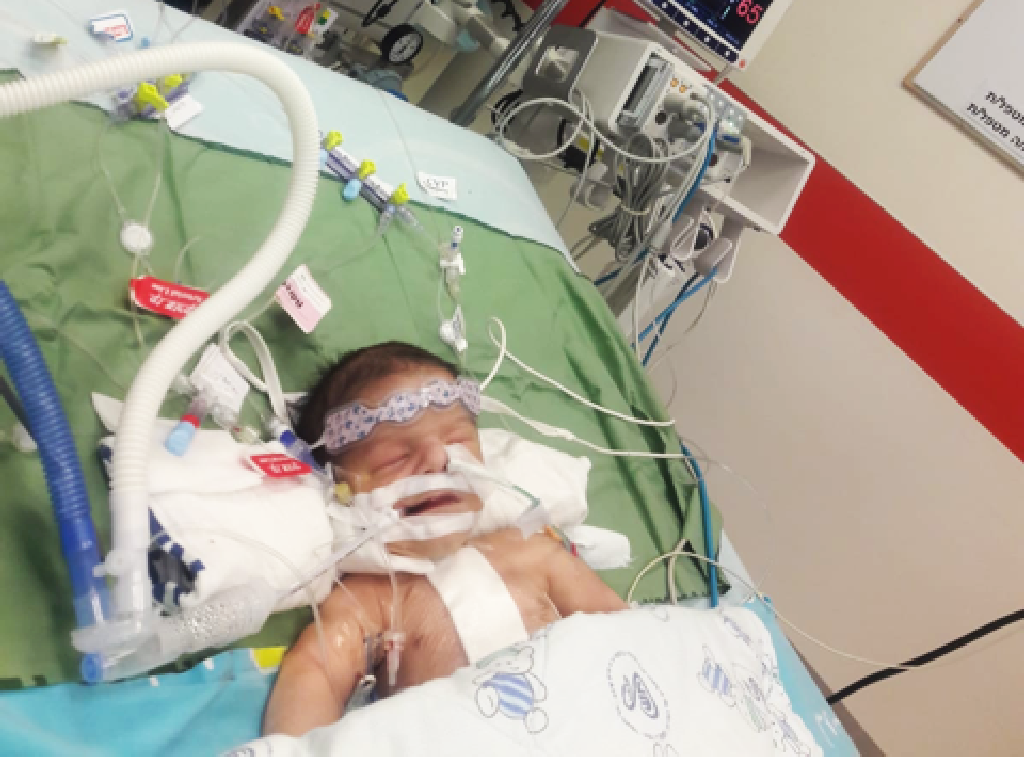 Little Mohammed is in the good hands of hospital staff after his surgery at Sheba Medical Centre. Our Lord is also holding him in His arms.

Today I was on the sixth floor where the Pediatric Cardiac ICU is located. Mohammed is there now, and I went to visit him. Sadly I could not go to his room and see for myself how he is doing.  There was a friendly nurse who shared with me that our little Mohammed is stable and doing well.

We pray for his improvement and recovery to be complete. Thank you all for your prayer support for this little one. 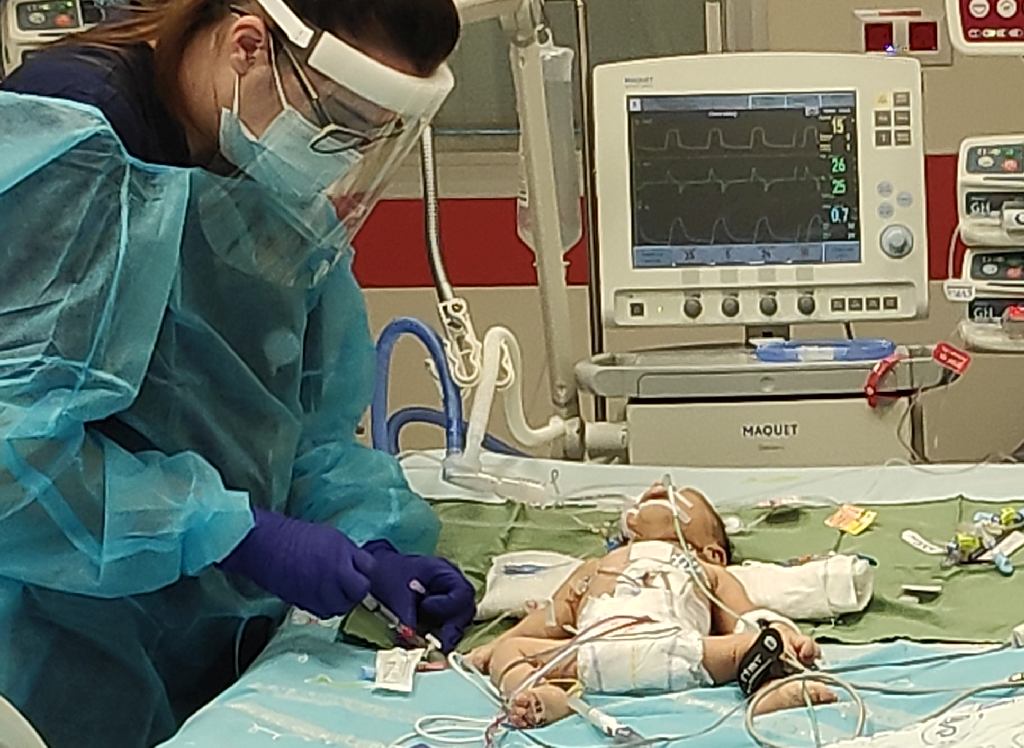 I went to Sheba Medical Center today to support Mohammed’s mother while her son was in his surgery. He entered surgery around eight in the morning. When I arrived at the hospital, I sat down to wait for her outside the surgery area. She came out after about half an hour. We sat down and enjoyed our waiting time together.  Another mother brought us some cake which was especially very nice for Mohammed’s mother as she hadn’t eaten anything for some time.  After a few hours, Mohammed’s grandfather and another family member came to the hospital and joined us as well during the difficult waiting time. The grandfather brought some delicious falafel sandwiches with him.
The surgery was finished after around six hours. Thank God it was successful. They did an Arterial Switch and a VSD.  When the doctors told little Mohammed’s mother that the surgery went well, she burst into tears of joy and fell down on her knees crying out, “El-Hamdullalah” which means praise God in Arabic.   It was like a huge weight had fallen from her shoulders. It was my first time seeing  someone doing this. Not only was I happy for and relieved with her, but I was also impressed at how unashamed of her actions as she was in that moment.
Please continue to join me in my prayers for this little Mohammed and his mother.
Hide Comments Show Comments 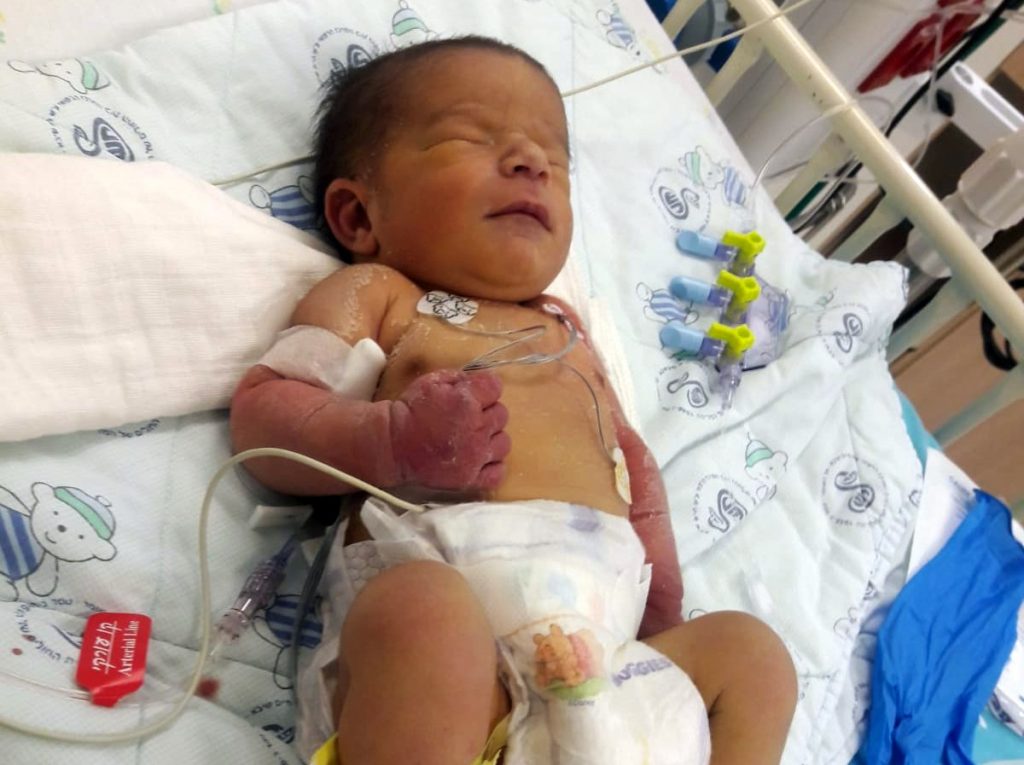 Little Mohammed from the Gaza Strip arrived safely at Sheba Medical Center’s Pediatric ICU yes-terday. When I went into the ICU today to introduce myself to his mother, she was sitting in her room and looked very upset. I said a quiet “Hello” to let her know that I’m there. She came out of her room. I introduced myself as Sabrina from Shevet Achim and used Google Translate to tell her that Shevet is the organization that brought Mohammed to the hospital in order to help them. Thank God she understood me, even though Google Translate isn’t always the best option to communicate with people of a different language.

When I asked her how she and Mohammed were doing, she only said “tired” and then burst into tears. Because of that response, I gave her a comforting hug. She told me that she was very worried about her dear little son.

The doctors did a CT scan on Mohammed today, and decided that they would like him to have an ‘Arterial Reflection’ surgery sometime this week.

Please pray for this lovely and worried mother, that she will find peace and trust in the holy Lord, and that her little son, who is in God’s hands, will find healing. 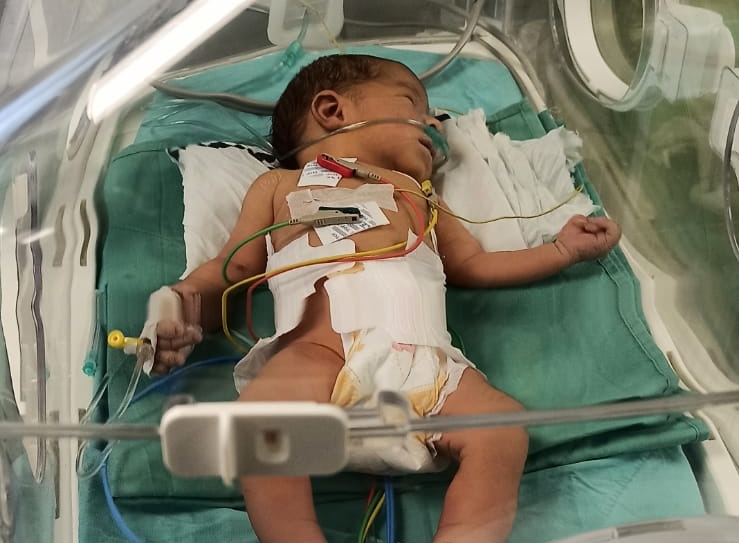 One-week-old Mohammed was born with transposed great arteries, which means his heart pumps blue blood back out to his body rather than oxygenated blood. He is being kept alive on special medication in the ICU in Gaza until we can arrange his emergency transfer to Israel, the only place where urgent surgery to switch his arteries back can be done in time to give him a normal life. 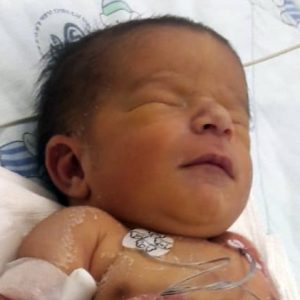 Mohammed R. is a days old child from the Gaza Strip diagnosed with transposition of the great arteries.

As of right now, Mohammed R. still needs $4500 toward surgery and related expenses.